Ken, I'm glad you're getting to the beach, even if it's to witness a storm. That's something everyone should see once. I hope it doesn't destroy the Dunes. They, along with their highly integral sea-oats are what help keep the beach intact. Holley and I, playing with fireworks, almost set fire to the sea-oats at Pawleys Island one night, with a Northerly wind blowing straight down the beach. We were at the North end, so if we had not been able to scramble fast enough to kick sand on the and smother the flames, well... nobody in their right mind would want to be the one that torched a whole Island's oats. The wind would donate the dunes to the next beach to the south, in short order.

All who are interested in my particular situation, understand that I have a head start because I am meticulous about everything being in its place... which does not translate to keeping the inside of my house neat Lol. But nothing in the shop goes missing for long, Sometimes I forget, because places where things belong do overlap, not uncommonly, causing Duh moments. Except my 4-40 Red T-Hex wrench is AWOL for two weeks. I'm not dumping the trash cans, I need a better quality new one anyway. I do enjoy seeing what other people's shops look like.

Boy, Ken, you have a great bright area. Mine sucks up light like a black hole. Wayne calls it The Cave. I really need to paint my ceiling white. And I've learned never to buy fluorescent lighting at Lowes, since half of the 48" twin-tube units don't work, straight out of the box. And I have a couple that I have to walk over to when I flip the switch, and give them a whap between the tubes to turn them on. It only takes one try in dry weather, but gets downright irritating other times.I think my building was built in 1948, along with the house, but it's pretty solid. Not too sure about the electrical though. I had squirrels in the attic for a while.

Also, I am going to piddle with this, it is not a mission. It's just something I want to do,  Remember, this is the same guy that spends 6 months thinking his models will be ready in 3 weeks. Maybe if I didn't fly so much.

I had squirrels in the attic for a while. wrote:

You still do , knaw just kidding . We had WOLF RATS at one time in the house I was on a women hunt and let the grass grow up in the field , that's a NO NO them some bitches are mean and nasty !!

Ken I do hope your beach is OK through this storm (( enjoying the cooler weather here but now the wind has picked up , but its time to learn to deal with it .

A couple of years ago, Wayne had me flying patterns all day with my old Dirtybird Skyray in 18+. I've never been scared of it again. In fact, if I know there's a good chance of it, I go ahead and hope for it at contests. I did at triple Tree this year, and got it. Along with a 1st place trophy.
Rusty

Tonight I looked around me.. here.. in my shop.. and decided to do a 360 degree photo-op. A tribute to red-neck shop-organization.

This is how it is... currently 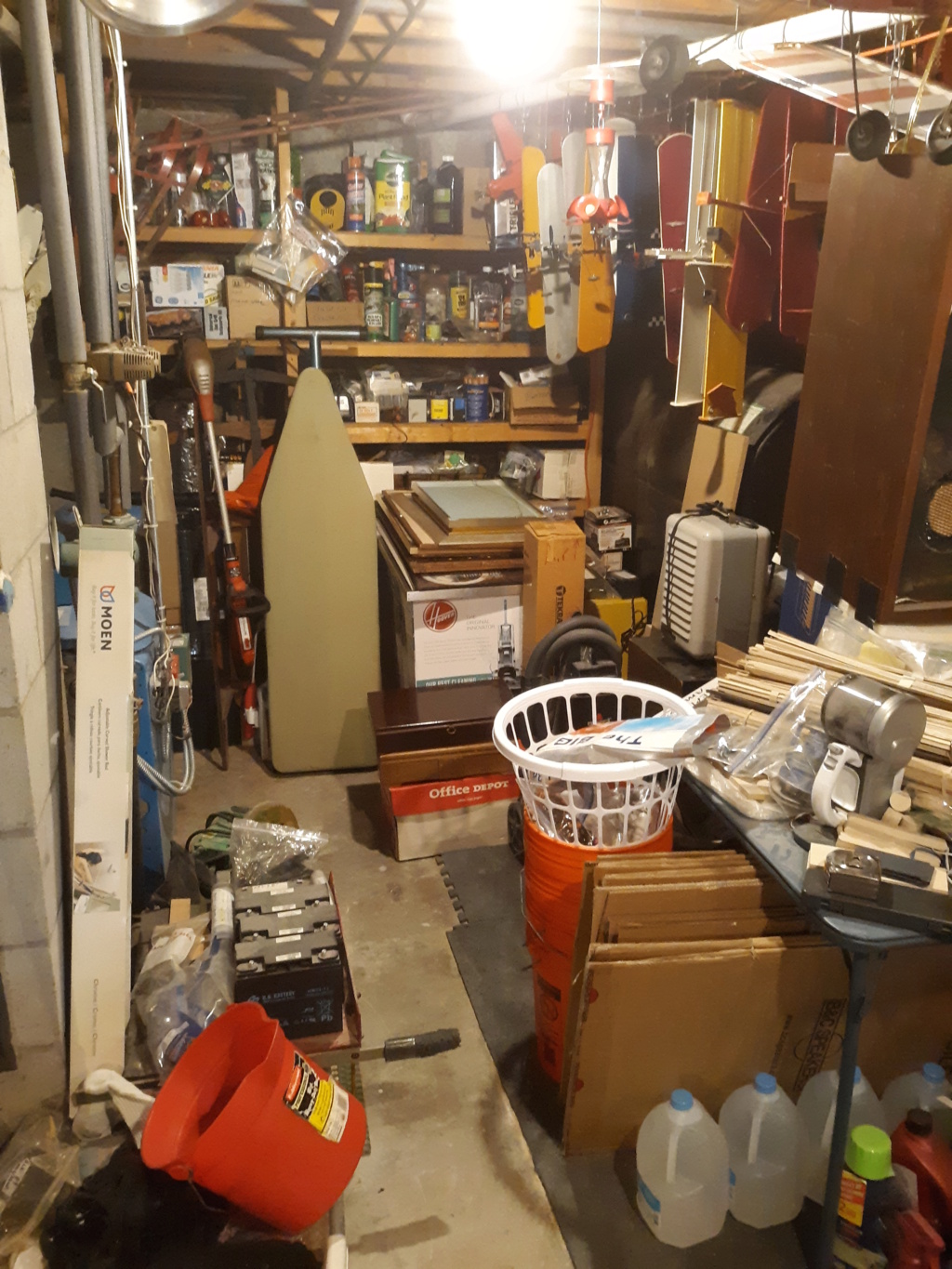 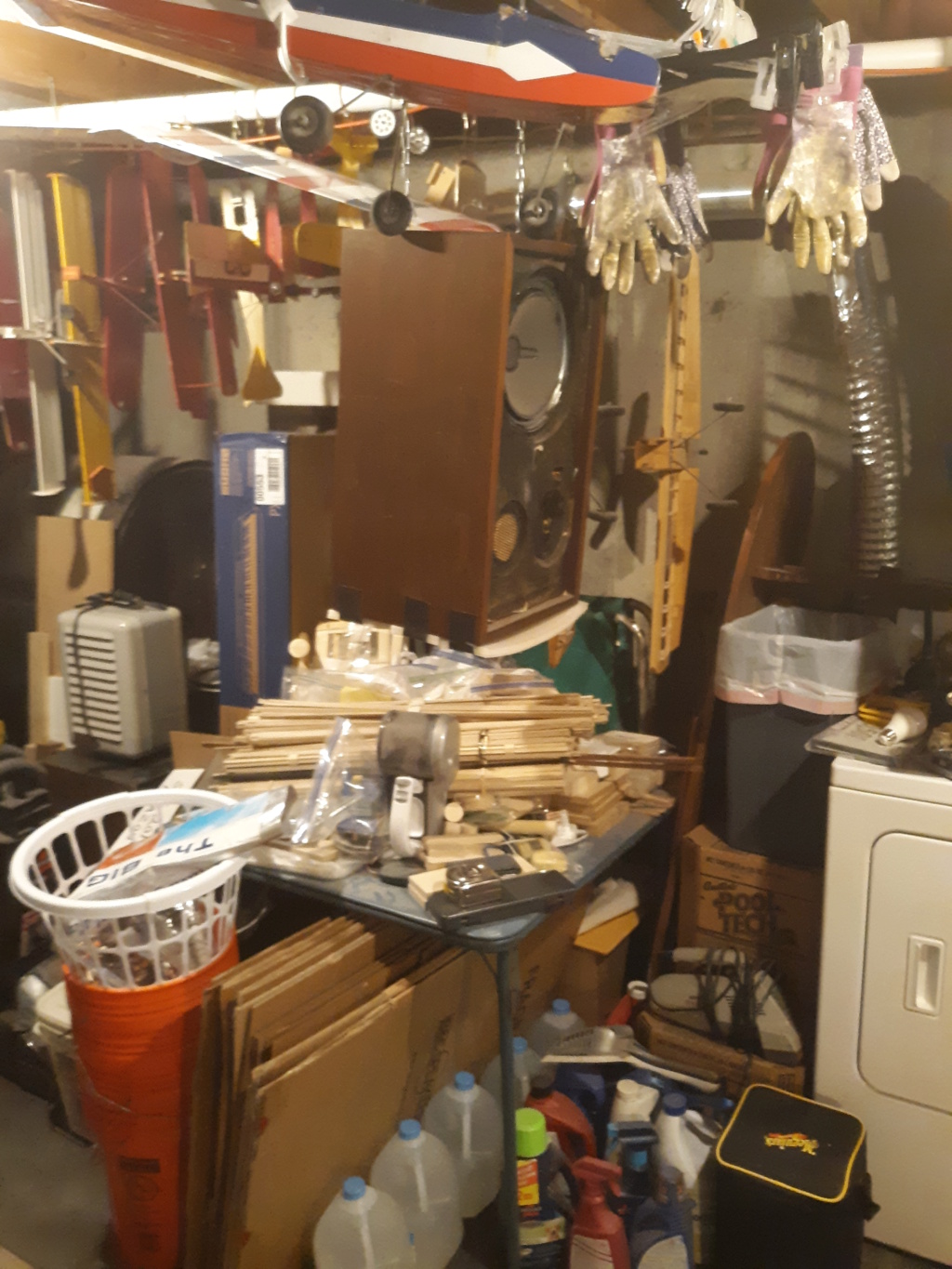 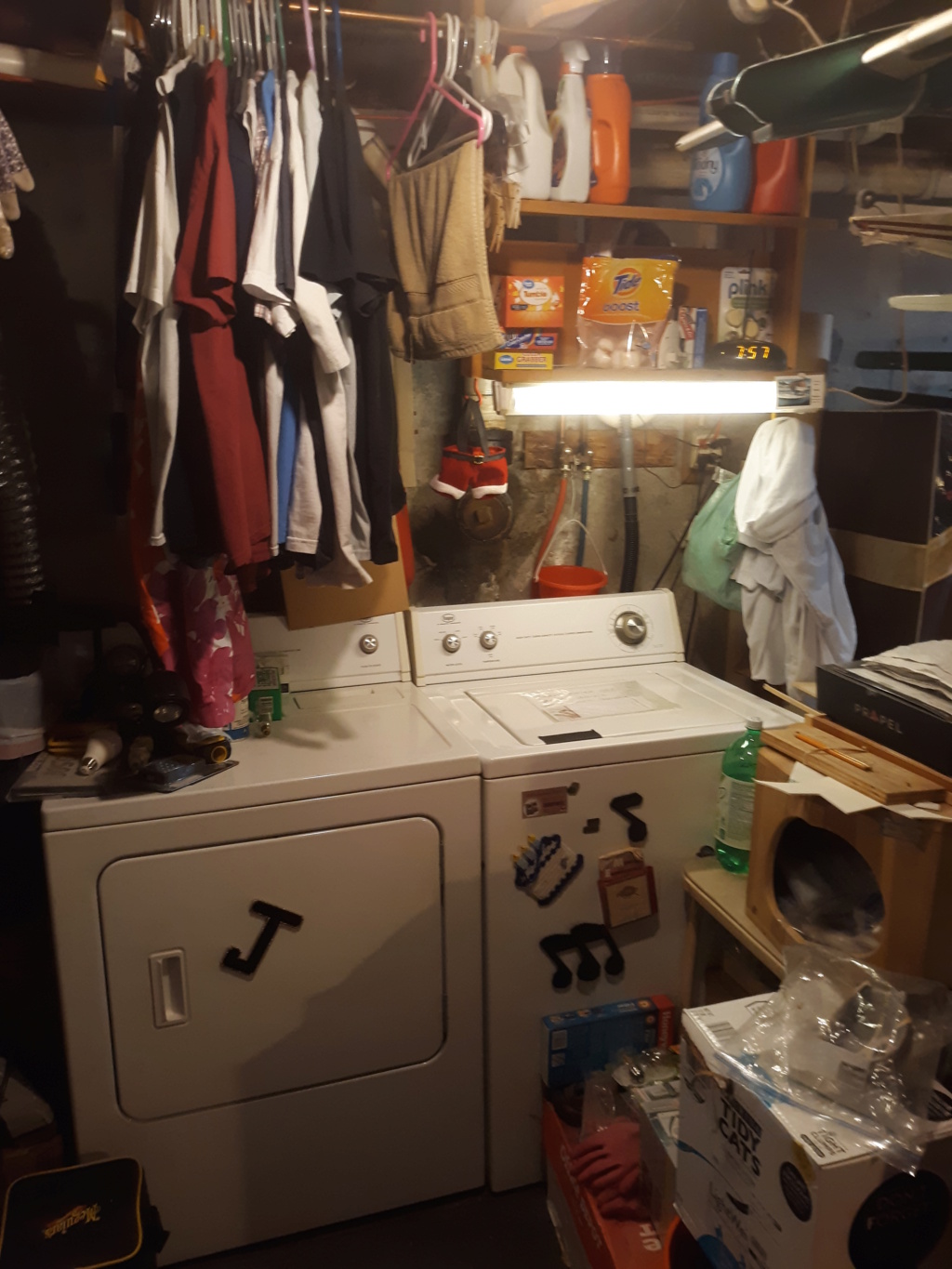 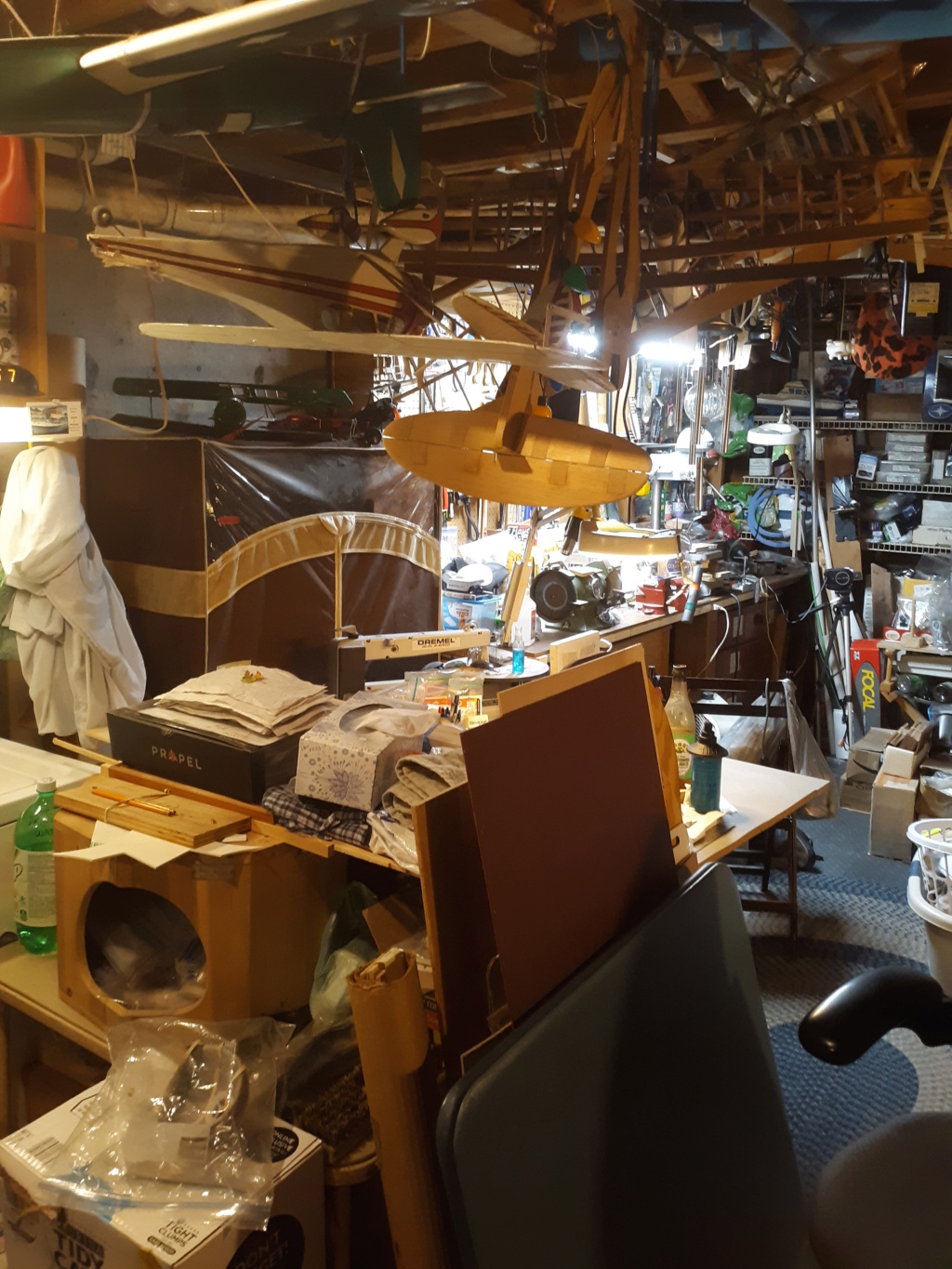 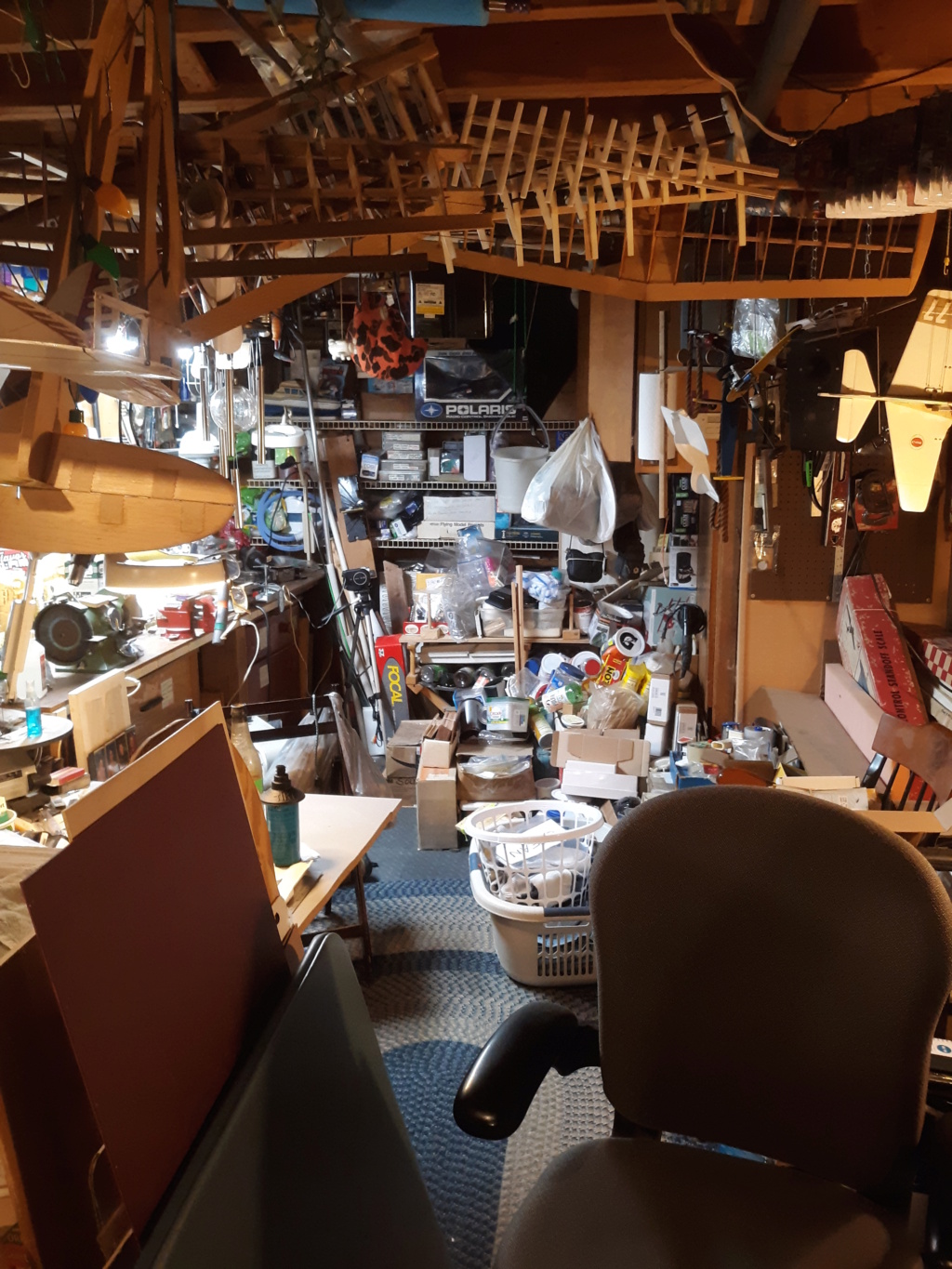 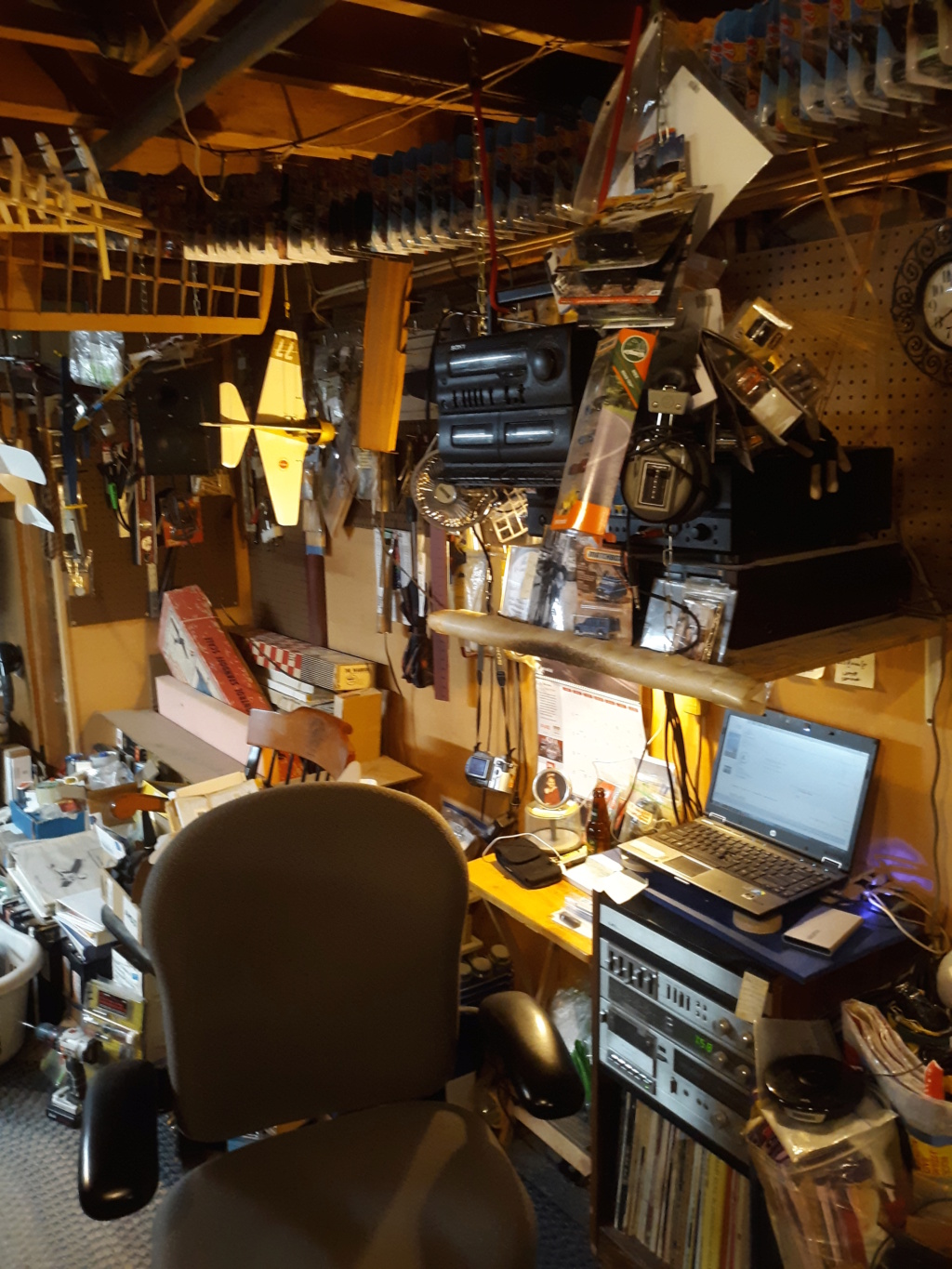 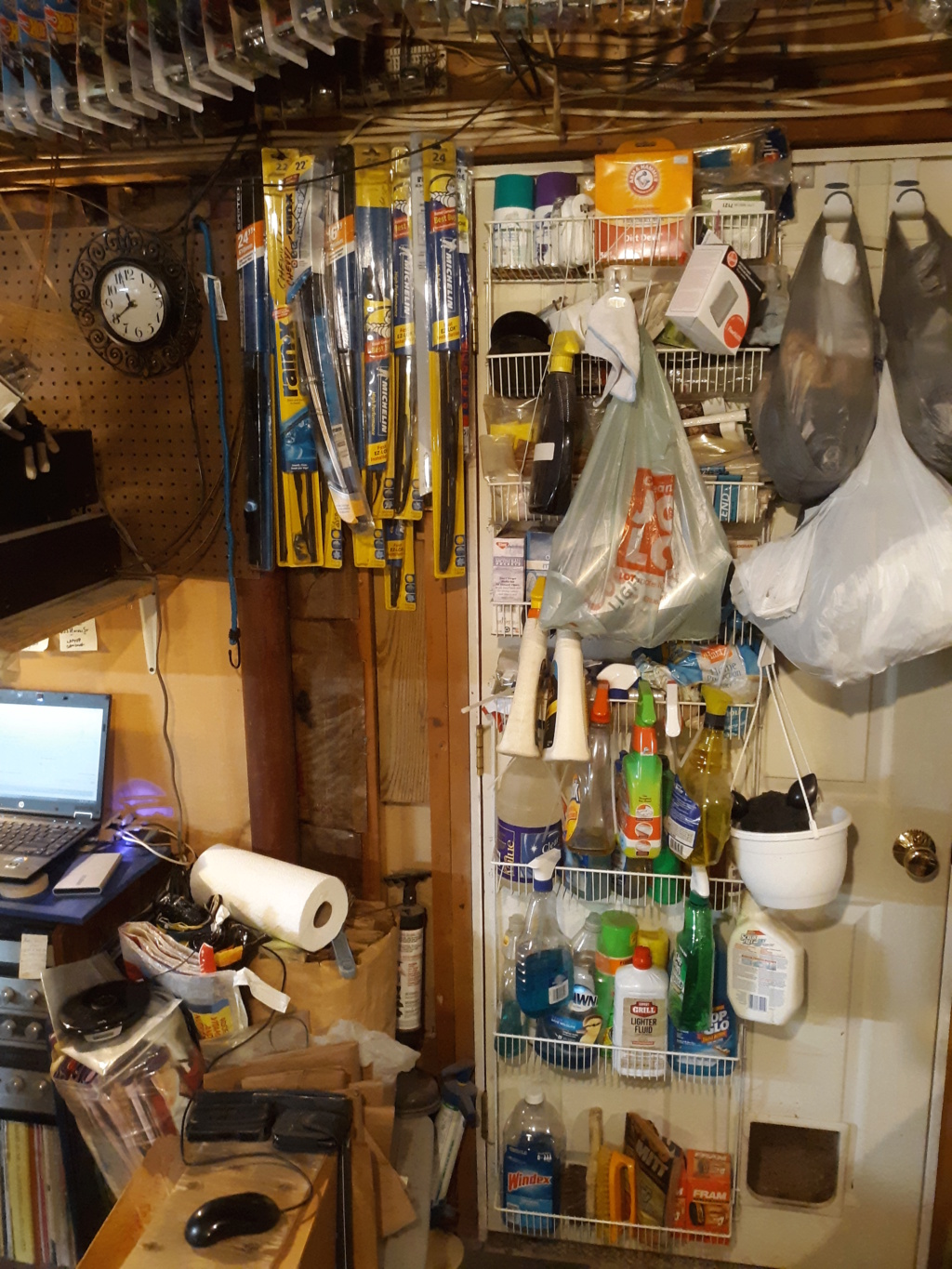 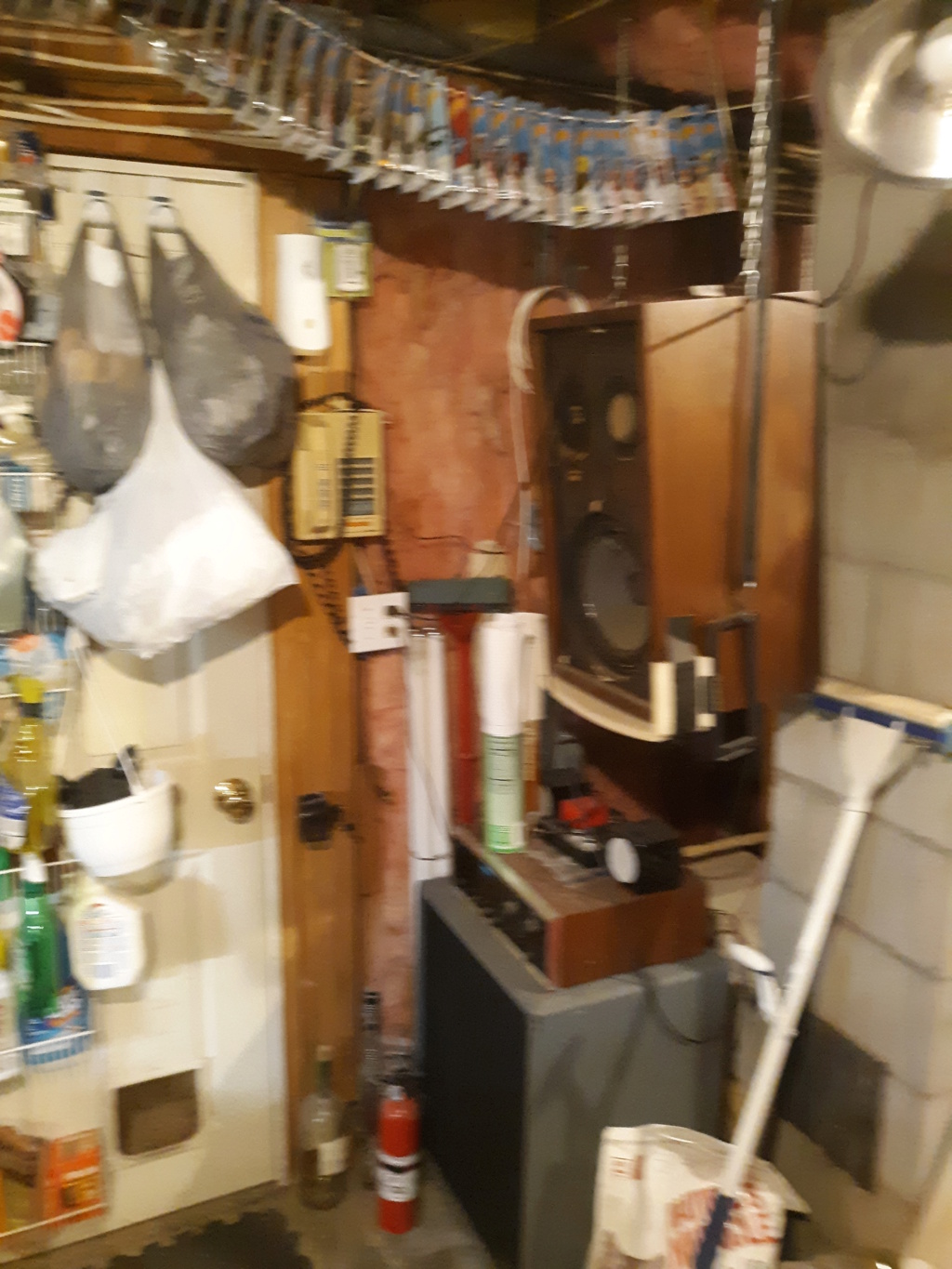 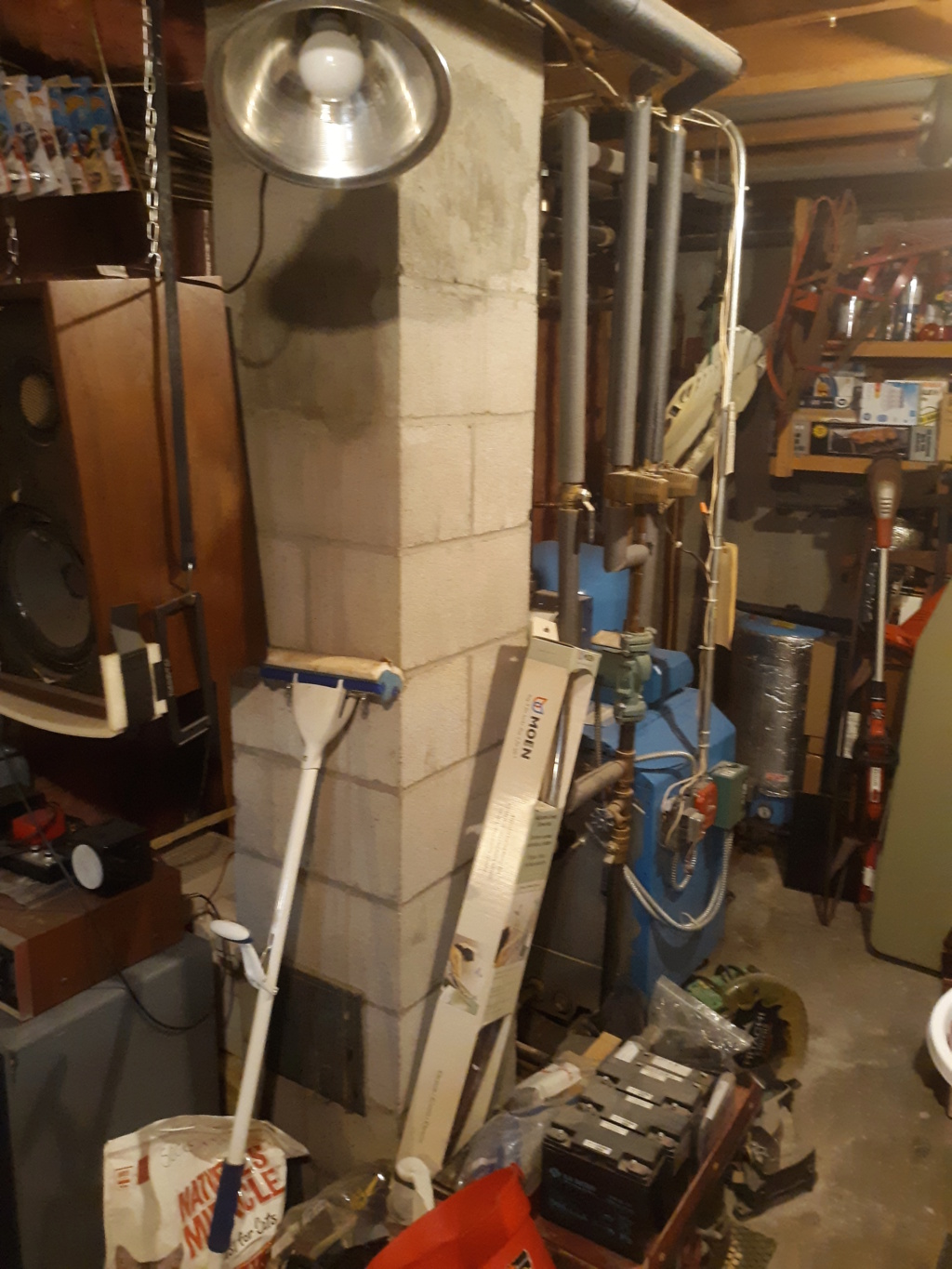 a room without a window.. but not without a view..

Mentioned early in this thread. My first airplane at age 11. Never flew successfully. What are these things like to fly? I wouldn't mind building a second one 60 years later maybe powered with a Black Widow. My original unsuccessful plane had a Fox 0.09 for power.

Jim the Stuntman 23 is a good flier , the Blk. widow is a good choice for some loops , inverted wingovers .. If you build one reinforce the fuse behind the wing / there bad about breaking there , maybe some carbon fiber . I have two one broke the other with a Medallion .049 on the front it jumps off the ground in a short run . Rusty had onw that he shortened the fuse after it broke and flew fine !

Thanks for that information. From what I remember the kit was originally priced at $1.95. How times have changed!

roddie, how do you find anything in that mess......

I just wish he would fly and finish some of those cool planes.

Jim, if price is an issue you could always buy balsa and build from scratch. The Stuntman is a super simple design.

I just wish he would fly and finish some of those cool planes.

Jim, if price is an issue you could always buy balsa and build from scratch. The Stuntman is a super simple design.

Keeps a clean house too Rod, everything from Baking Soda to Simple Green.

Just a heads-up. They offer a lifetime guarantee. Just last week they sent me a replacement kitchen faucet/wand that had given up the ghost. Free and postage paid. 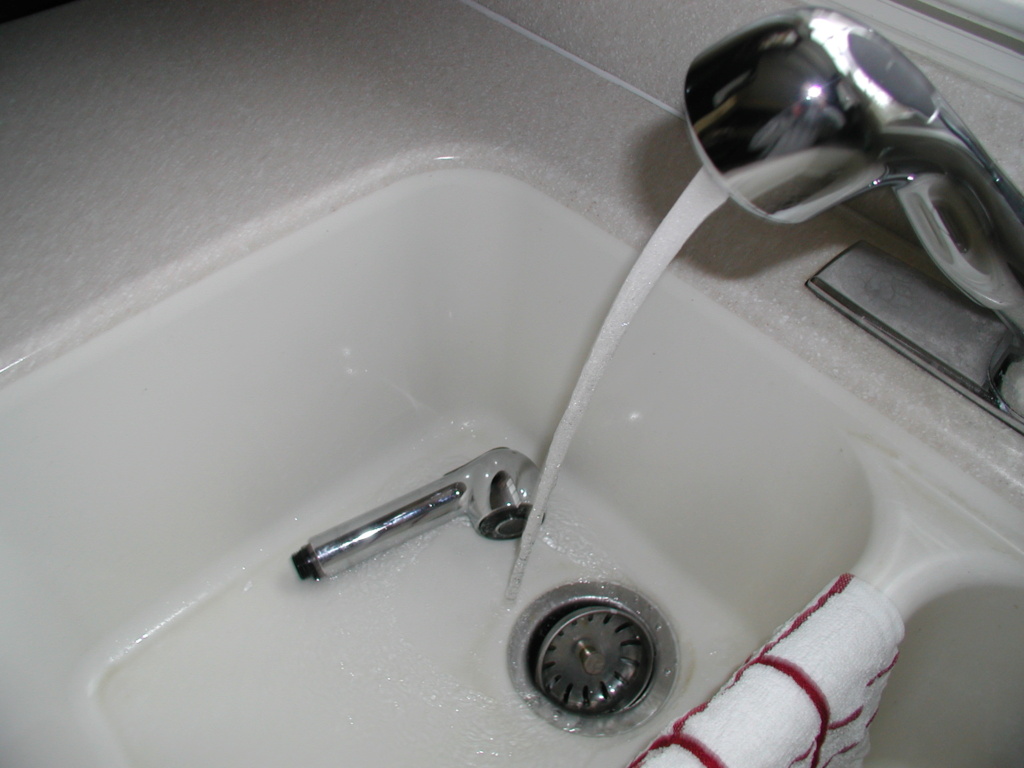 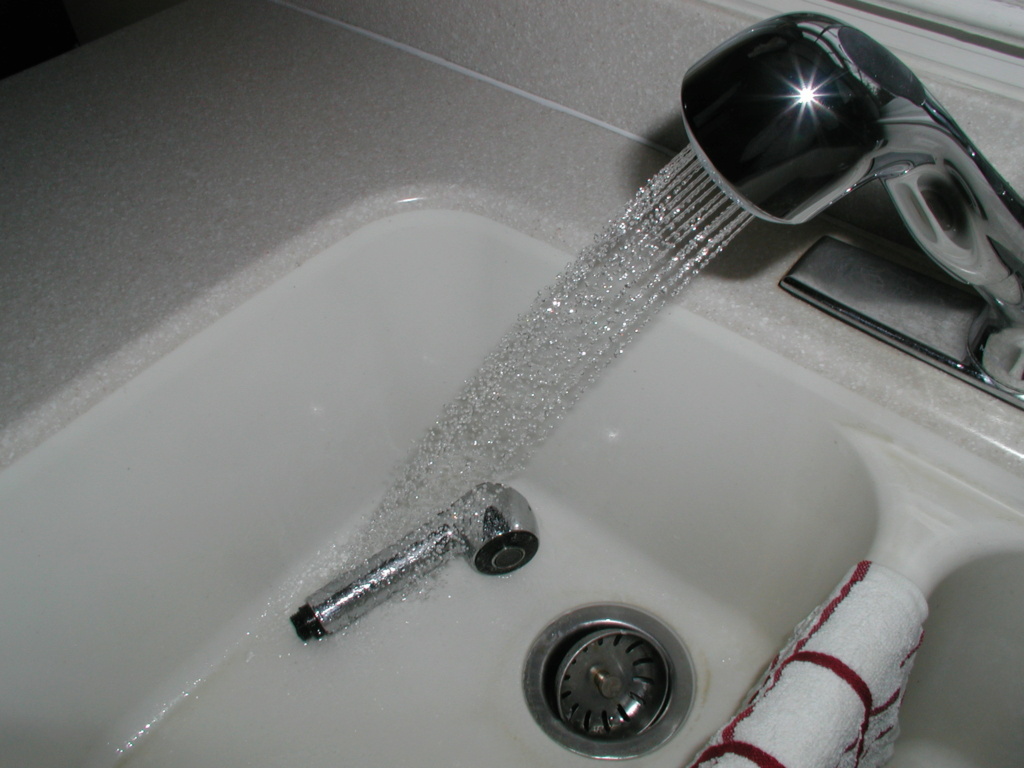 Like being born again after struggling with that thing for months to get water out.

I found this (Rusty's) thread while searching "Workshop" using the Google option..started reading and missing Rusty.

My workshop is a real mess.. isn't it. I thought it was important for you guys to see what I'm dealing with here.

Heck.. you guys are probably thinking; gee.. my shop is nowhere near as bad as Roddie's...... Just my way of spreading a little joy. 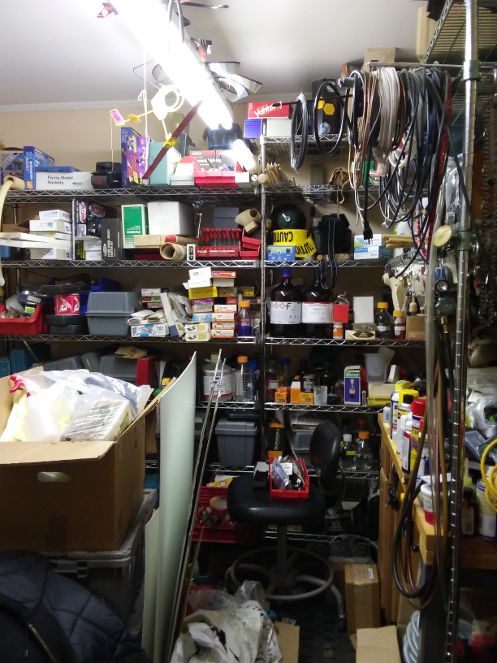 I have all my engines and things related, in another room. I feel no guilt or shame.
Maybe it's a northeast thing.

Don't you worry Roddie.  You will never see photos of my workshop on here, for good reason.

Nice collection of Hotwheels you have there.
I agree with Ron.  You've put in a huge effort to design and build so many 1/2A aircraft, we want to see something fly.

Round & round is just fine, nothing fancy required.  Falling over dizzy at the end is just a bonus for all of us.

How do you guys work in those Rats nests?  I'm a tidy freak...same way I operated as a mechanic for 42 yrs. Much easier to get work done when you can find everything!  .....this had to be cleaned up and reorganized as things were getting out of hand the last few weeks! 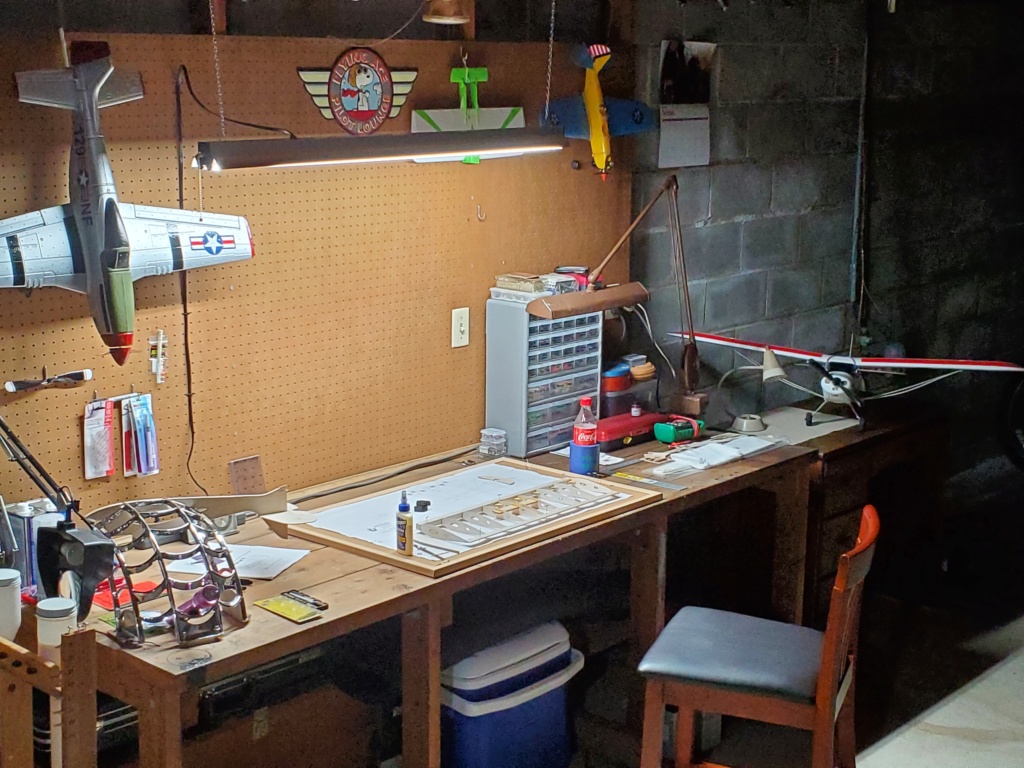 It's creeping in on me again! 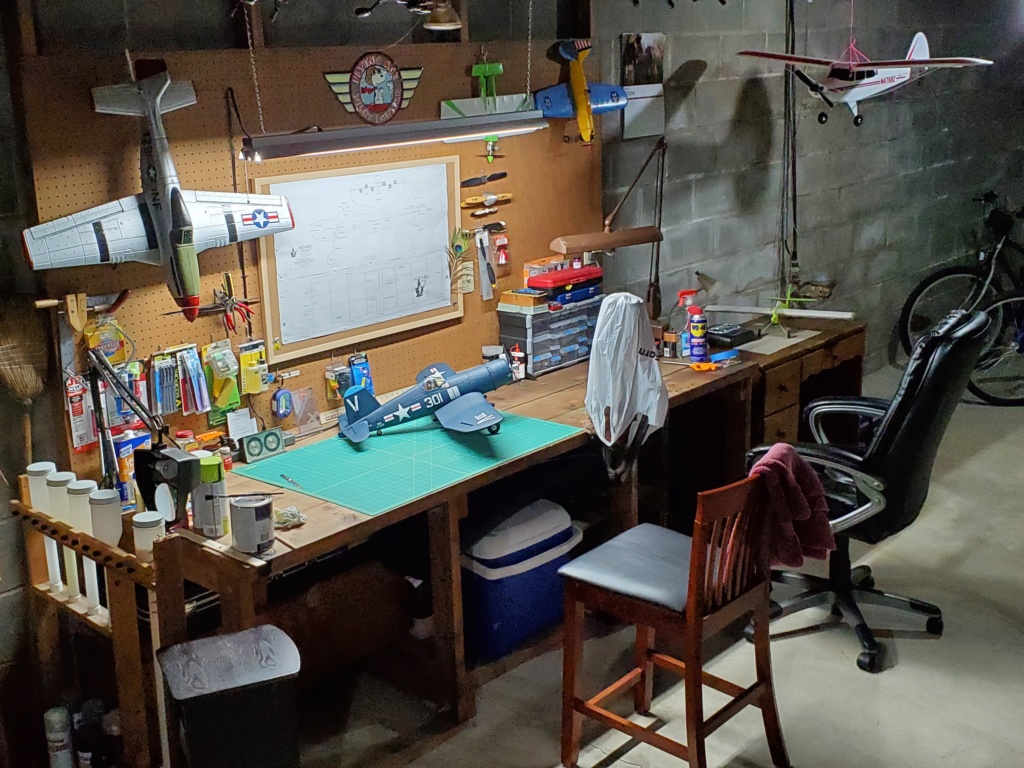 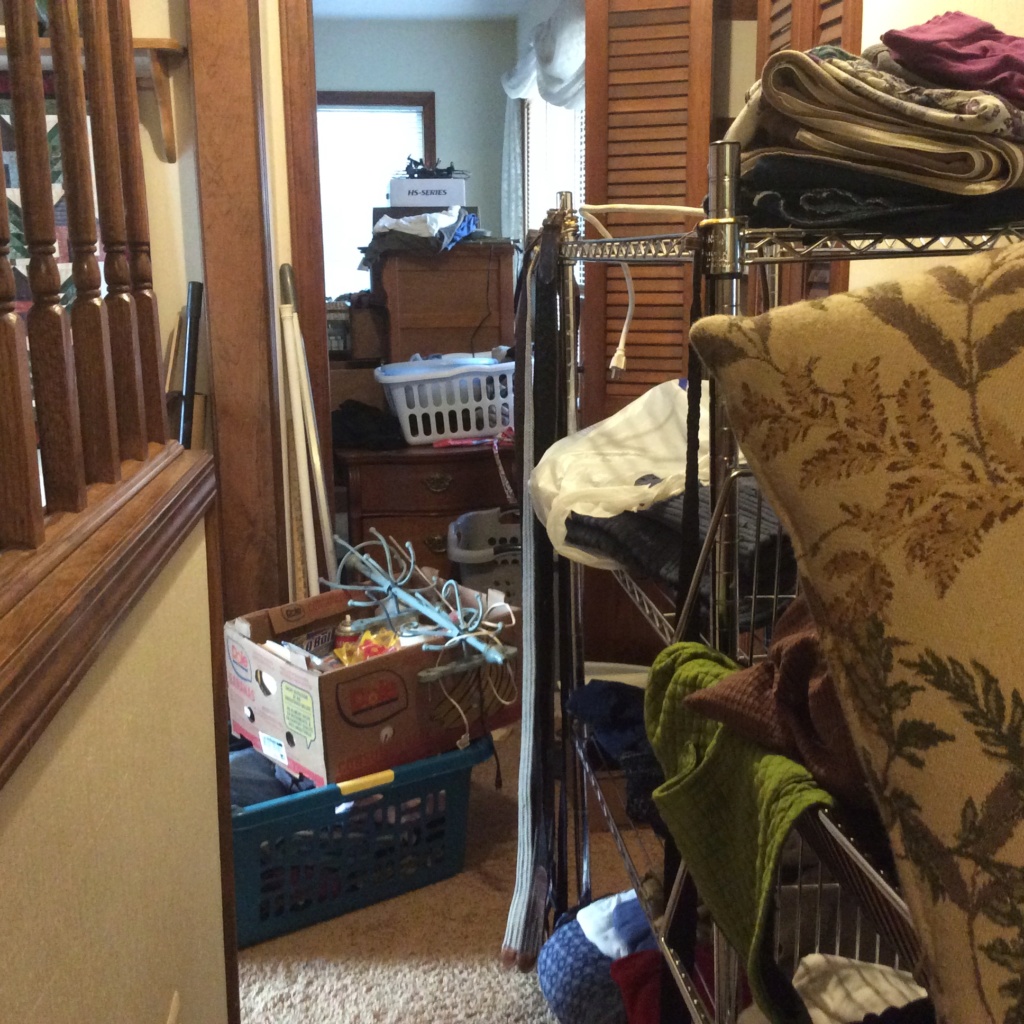 The Sewing stuff in MY room: 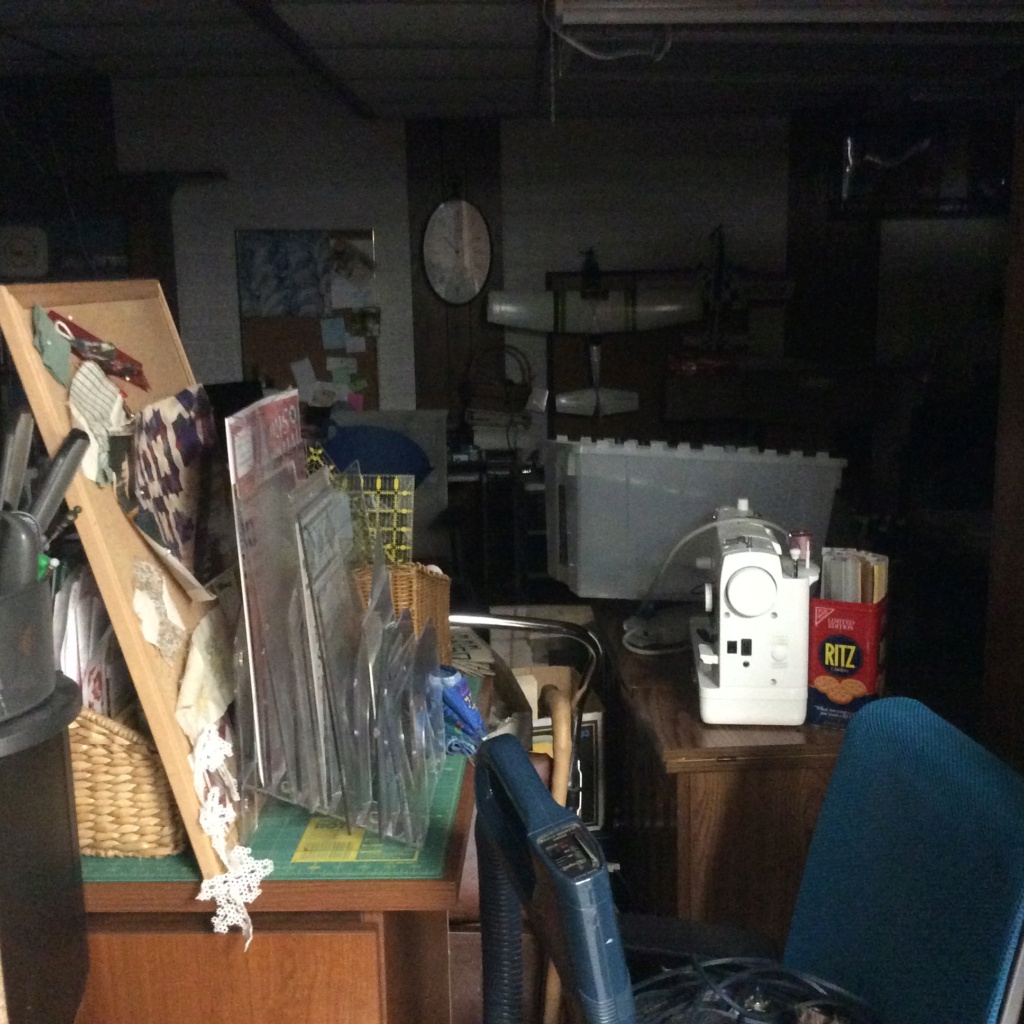 Well, they all look fine to me!  I (we) are in the end stretch of a minor remodel started by a crack in the bedroom ceiling. It’s been there over 20 years, but had to be fixed....now. Had to relocate all the bedroom furniture to the other bedroom and hallway, filling it to the brim. The bed is set up in the living room. The Drywall / Plaster guy came in and started to remove the ceiling and most of it just fell down!! He said that there weren’t enough screws holding it up and was surprised it held this long! New drywall and ceiling insulation installed. Now, prime and paint the ceiling, by the way, the  walls could use a new coat of paint too. SWMBO starts bring home carpet samples. WHOA, there filly! Cut the expenses, got the old carpet cleaned and streched, looks like new to me, it’s the same color as the walls when we’re sleeping. She found a Great Deal on carpet cleaning two rooms for one low price. The other bedroom is FULL, the hallway is packed. What other room do we need to clean carpet??  Oh, her sewing room...so her tables and sewing/crafts storage shelves and furniture all get moved over into ( only temporarily?)  my workshop/airport area.  Talk about packing things in tight, she is a Jenga champ in reverse.  So, maybe by this weekend, if the carpet is dry we can start moving things back.  We did take a very large load to the Salvation Army of clothes, shoes and items we no longer need , but still have more than enough to be on episode of  Hoarders, or even American Pickers!

Her soon to be cleaned room: 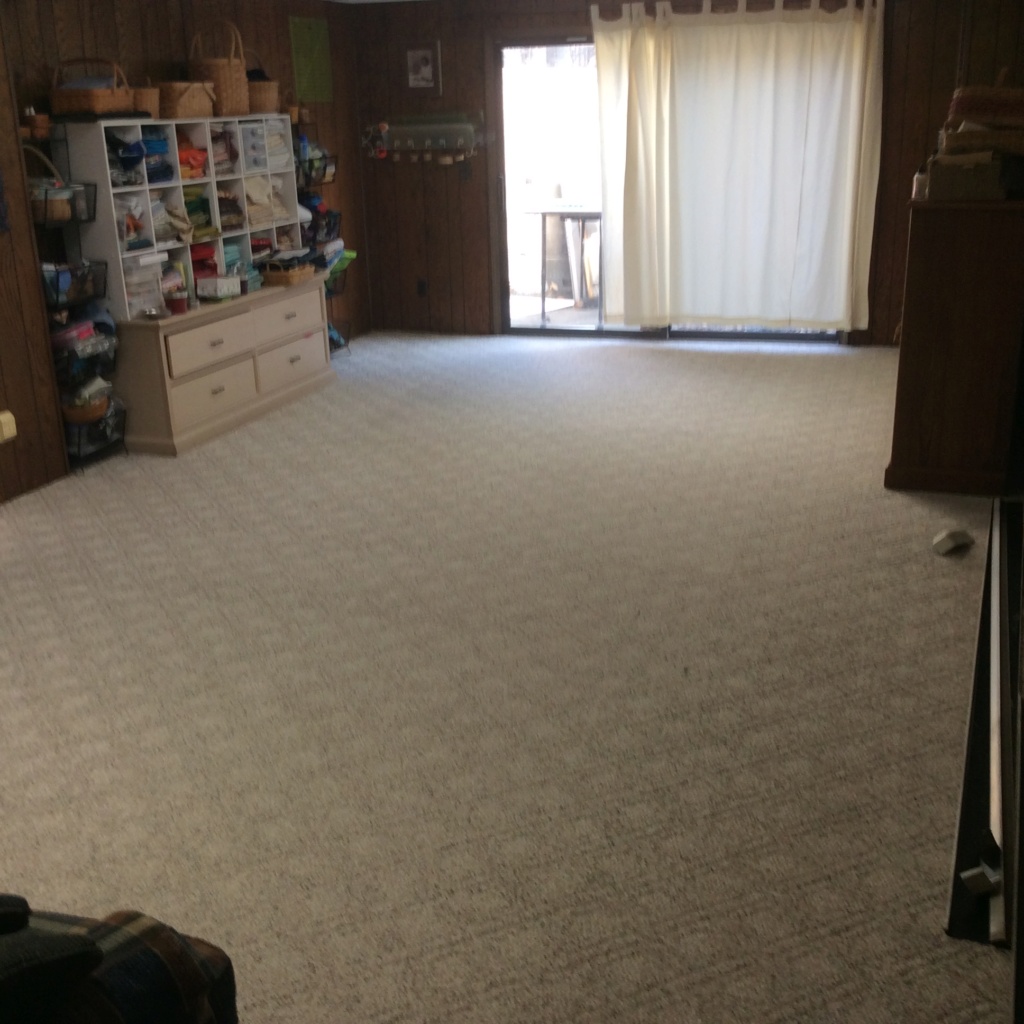 Wish I had THAT much room! The majority of my household stuff is still in storage! Moved in May...and ran out of ambition and energy. Been sick with something the last 3 weeks...so not getting much accomplished.
.

OhBee, I hope you're on the mend.
Bob

I have all my engines and things related, in another room. I feel no guilt or shame.
Maybe it's a northeast thing.

BTW, I sent you a PM a while ago and didn't get a reply back. I'm thinking that you never received it?

At least you used the lg. pc. of real-estate that was in the center of your pegboard. Our house is your garden-variety raised-ranch.. with scarcely enough room for more than 2 adults with two young children. No young children living here.. but Lynne's son (my stepson) has been living with us here since this past late-Summer. A victim of divorce-displacement. I was there 25 years ago.. and was close to the same age as he is. 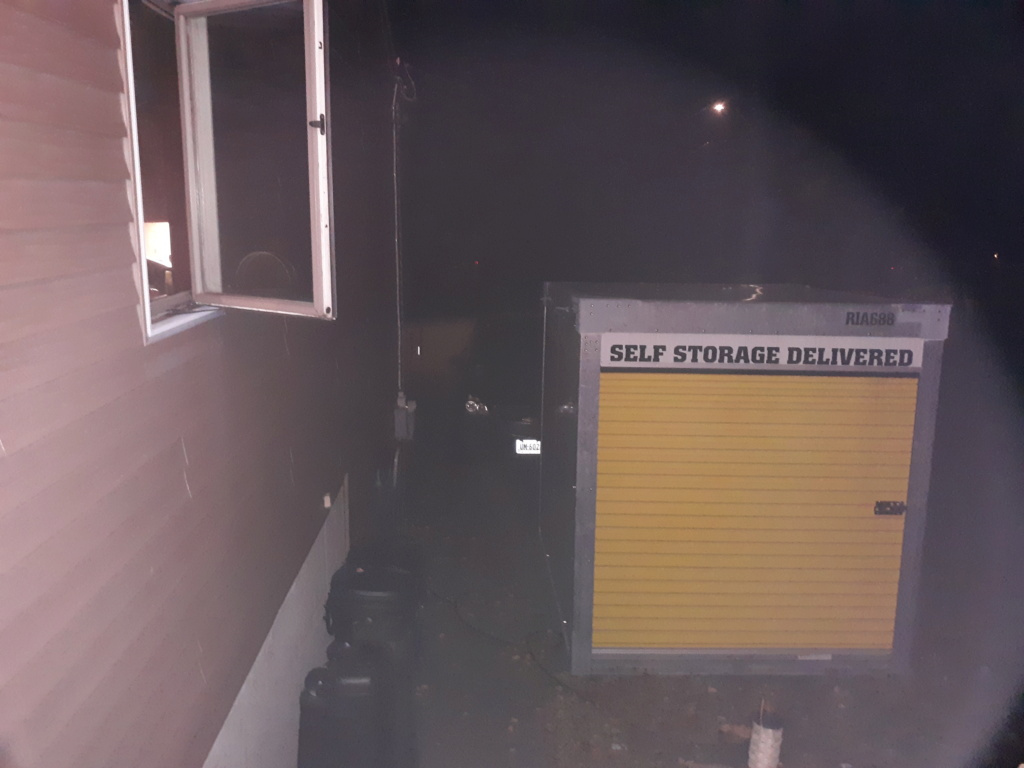 The shed "loft" has some vacant space.. but items need to be carried up a ladder to gain access. Shed loft space is at a premium. I'm rather selective at what goes up there.

We're still in-process with moving Lynne's son into one of the spare-rooms downstairs. He'd been on our "couch/divan/davenport/sofa" long enough. It's a lesson for all of us; in being displaced.

Turns out this work area in my basment was built by the late older gentelman that used to  own the house. He Also built RC and controline airplanes down here!  The guy I got the house from said he threw out all kinds of boxes of stuff cleaning out the place! I caught him with the last box...it was full of fuel tanks,prop spinners landing gear,Veco bellcranks( still in the packages),full jars of dope , (all long gone bad),....and misc balsa sheets. I can't imagine what got pitched that I missed!...What a bummer!