Log in
Search
Latest topics
» Some Action on Breezy Hill
by andrew Today at 9:52 pm

» Crash Free weekend and I did Fly
by dckrsn Today at 8:23 pm

» The resurrection of the frankenplane
by MrGoodwreck Today at 7:40 pm

» Space Bug Jr Hop-up kit
by getback Yesterday at 6:31 am

» Space Hopper help needed
by getback Yesterday at 6:29 am

Hey ya'll. I hope some of you had a chance to go-over this thread. Bernie (Cox International) is willing to publish this concept in their quarterly e-magazine.

Richard (RKflyer) applied the concept.. to a couple of builds in this thread. I think you'd agree that they look great!

Just another point to make..

There are lots of sheet-wing (flat-wing..) 1/2A (as well as 1/4A..) airplane designs out there to build. Framing that wing can save on balsa. It also affords the application of a spar. Multiple clean-fitting frame pieces, make a flat-wing (frame) less-resistant to warping.. because of multiple grain-direction between the pieces. My flat-wing panels were all covered with TF Mono-Kote.. which is still drum-tight after 25 years. I can't speak for other covering-methods. This construction-method wouldn't warrant a doped rubbed-out finish any more than any little solid sheet-wing build would. It does provide for a different-approach to just butting two sheets of balsa together.. and trimming the perimeter to form the wing-profile. I installed a 1/8" x 1/2" stub-spar made from dark hardwood (walnut possibly) in my Rare Bear's wing. It was basically the leading-edge of the wing. I needed a scale/wing-mounted landing gear. This required making separate right and left gear-blocks.. also from hardwood. 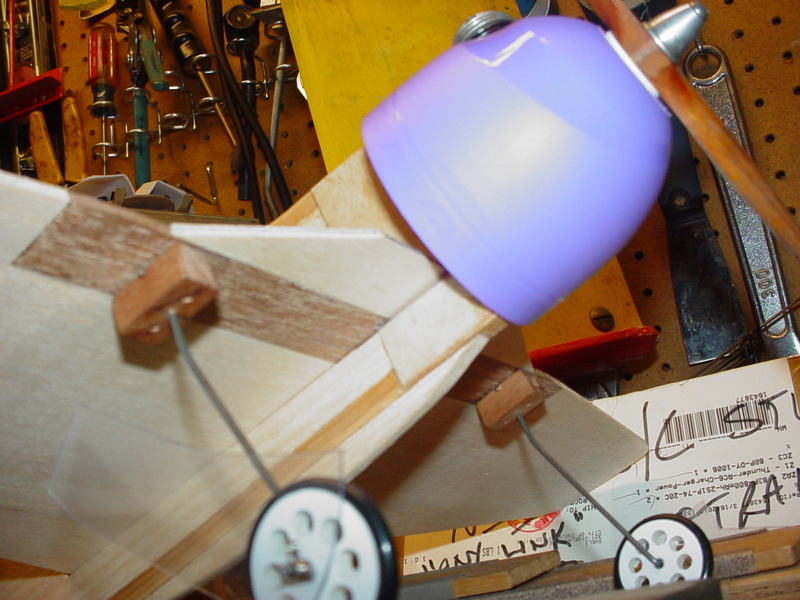 The blocks were mounted to the bottom of that hardwood spar, to absorb the shock of a hard landing. I used to have a "one-method" approach to attaching 1/2A landing-gear. It was a single inverted "V-bent" music-wire gear, running-through the front of the wing-slot in the fuse.. and anchored by straps with screws through the ply fuse-doublers. That's the age-old approach to gear-installation on a c/l profile model.. that has gear.

Plenty of flyers don't want landing-gear on their model. That's fine. A hard strip-wood spar in their wing will provide rigidity.. and could also serve as the ultimate bellcrank-mount.

You may discover you can actually make rolling landings without the usual 1/2A nose-over if the grass is reasonably smooth. I'll be interested to see how that works.
Rusty
_________________
Don't Panic!
...and never Ever think about how good you are at something...
while you're doing it!

@RknRusty wrote:You may discover you can actually make rolling landings without the usual 1/2A nose-over if the grass is reasonably smooth. I'll be interested to see how that works.
Rusty