Cats a$$ and whiskers...sorry but as a non native speaker I still wonder if these are derogatory ,pejorative or just funny slang expressions?

Cats a$$ and whiskers...sorry but as a non native speaker I still wonder if these are derogatory ,pejorative or just funny slang expressions?

Answers to all these questions (and then some):

[quote="PeterJGregory................If you still have the sheets that the ribs and formers were punched from, that is even better. If you can them, or at least trace the outlines and send to Steve at outerzone.co.uk, there would many who would be in debt to you for preserving yet another classic model.

I have a couple of kits right now I bought just to scan the plans and send to Steve. He has a couple of plans online that don't have ribs/formers that, again, I bought the kits for so we can capture the ribs/formers. If you really want, I would pay to ship the remnant balsa pieces to me and I'll do the work.

You're doing an excellent job with the build, too. He'd love photos to post when you're finished...

Pete, can you please send me the contact details of Steve at outerzone? an email address will suffice..thank you.

I really like the looks of your Cosmic Wind, it also reminds me if the 1st Cox plane I ever had the TD-3. Flying Circus.  I'd like to do what Mark did with his Td-1 trainer and replicate it in a full balsa model.

Thanks Rene I will contact him and offer him the copies of the formers, ribs and whatever will be available in the other kit I found on ebay and which is on its way to me (and which I hope will not miss more than just the plastic parts as the seller said). Lets see if he is interested in lasercutting it..

Sorry to say but Steve from outerzone has not replied to my email that I sent him a couple of days ago, and he is probably not interested in reconstructing this plane.

Have you flown the Cosmic Wind yet?

Bill thank you for your interest.

Actually not yet. Last weekend a week ago the weather did not permit. Then I was travelling abroad on business  and hit home only this Saturday morning. Weather was again too cold and windy in the past two days..I am getting it prepared for the maiden in the coming days though. Added an exhaust throttle control for instance. Mounted and ran the 049 in the garage setting the throttle. The exhaust gases need the be deflected from the cowl because the monokote is unhappy with the heat. Added a provisional heat shield.

Too bad that the old flying field in the nearby where I used to go is not accessible by car any longer. I go there on my little Honda grom but this plane is too big to put it in a backpack. I have another field option some distance away where I will maiden it and my wife will make a video according to our plans and I will post it.

The original old, thin plastic cowl cheek cracked when I inadvertantly pressed it while holding the plane, so I cut out a similar one from a plastic shampoo bottle and added as replacement. 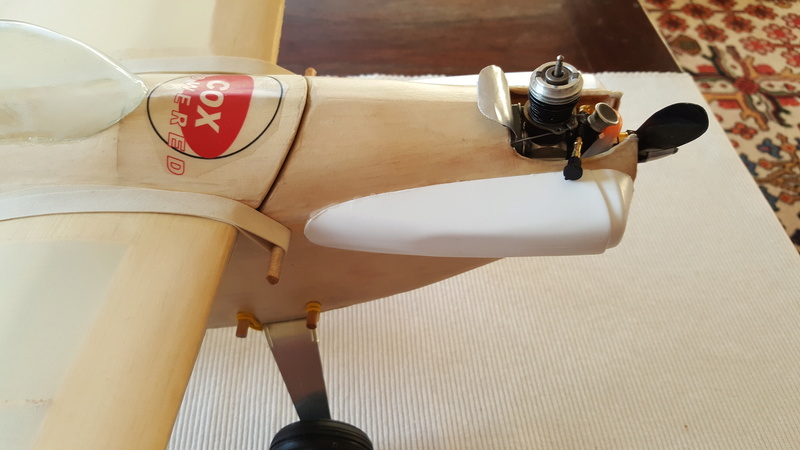 The rubber band holding the landing gear snaps easily because of the sharp edge of the aluminum gear. I aded some silicone tube bits where it contacts the rubber bands. Also added a wheel to the rear landing gear as the original was a piano wire skid.

Now beefed up as explained above it really has to fly eventually!!!

Here is a short maiden flight of the Cosmic Wind I shot today. This is one of the less interrupted videos I made, and unfortunately I overthrottled the TD049 and it stopped mid-air so the flight was cut a bit short.

My take-away, though, is this is a pretty stable plane, with excellent flying and gliding characteristics, but the smallest engine recommended for it is definitely a TD049..a Babe Bee or a Killer Bee remake would probably just mess around with this bird. I will swap the TD 049 with a TD.09 once I get some spares from Matt and turn the engine more reliable.

I am still hunting for a .09 exhaust throttle, or maybe I will have one made by a mechanics shop..

Sorry, I have just made it public...hope now it can be opened.

Thanks Eric, the small Sony headband camera I use really does not qualify for Nat Geo quality videos, but this is what I have...the TD .09 videos I plan will be shot with the plane flying much nearer to me...

YEAA ! Great Flight!! So glad you got it up in the air!

Thanks to you all. It is always good to read encouragements. I am proud to have built and revived this legendary model.

Unfortunately the 2nd one I found on eBay that the seller said was only missing the drawing and plastic parts turned out to be a heap of balsa scrap left behind by a modeler so other than its box it brings nothing as a spare part. This only prompts me to handle this plane with extra care.

My next video will already show the TD09 in its nose. Stay tuned if you wanna see. 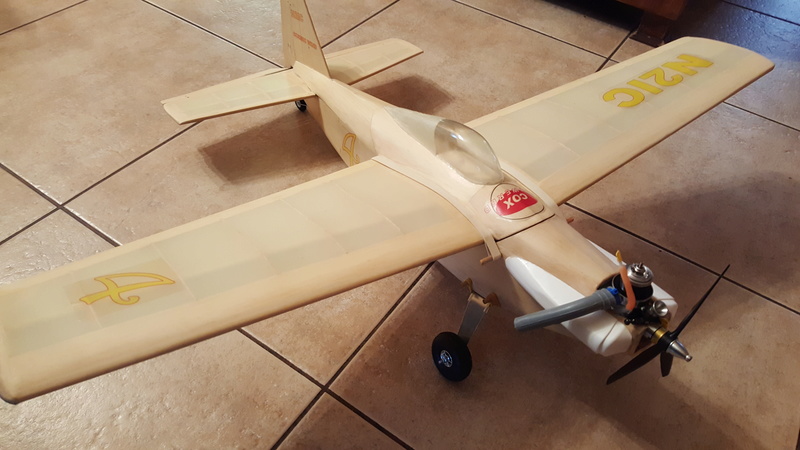 The sylicone exhaust header extender seems a bit large and will throttle the engine a bit, but based on my garage test run some brake on this TD09 brute will certainly not be for the disadvantage given the size of the plane relative to the engine output.


I also had 2 exhaust throttle rings made by a local fabricator, based on the cylinder dimensions I measured, allowing some tolerances. Will be available Monday next week and I will check the throttle properties later (sorry for the manufacturing instructions in Hungarian, and dimensions in SI rather than Imperial): 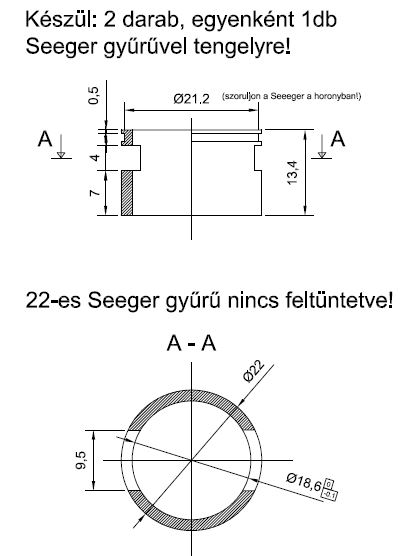 The clip  groove dimensions are based on the standard design of a shaft clip for 22mm diameter nominal shaft diameter, groove depth to allow tight fit of clip in groove. I share it with you just in case someone needs a cheap aftermarket throttle ring design for his 09 size COX (Medallion also included)

I managed to test the TD 09 on my Cosmic Wind today. An ideal combo, the TD09 has shown its superb performance. I flew 3 sessions, some 8 minutes each, before the cold weather (5C) forced me to leave for home.

What is the all up weight of the plane now and how are the decals (transfers) coping?

After seeing these posts - I got some Inkjet transfer paper and have been experimenting but more on that in another posting.

the all-up weight of the Cosmic Wind, with the COX TD09, muffler and extender, but without fuel, is some 580 grams. Add 2 ounces (I fill the balloon tank with a full, 60ml syringe) of fuel for a take-off weight. I burn about 2 ounces of fuel in a 8-9 min flight session as shown on the video.

The decals I have printed work out quite well. Even if I have the COX stock muffler on the TD09, it is not fuel-tight, and the castor finds it way at the edges of the black sliding ring and top ring, is then picked up by the propeller airstream and splashed on the right wing and the fuselage. The red COX decal I made and put behind the engine/in front of the canopy  gets the best of it, but is still OK and does not smear when wiped.

Some muffler on the TD09 is recommended when mounted in the Cosmic Wind, anyway. The balsa cowl parts around the engine get so  much heat from unmuffled exhaust gases that they get skorched, as did my firewall when I left the sliding ring on the muffler accidentally open. So a muffler, or any flue gas deflector, is highly recommended.


In the meantime I got my 2nd box of the Cosmic Wind from an ebayer, but the contents turned out to be some balsa scrap left behind by the owner after he finished a plane build project. So I rely on the Cosmic Wind as it is, without any spares. I hope it will last long.

Nice !! Looks like the TD.09 carries the mail real easily , am sure it will be more fun with the Exh. ring when she get there you can slower down a bit and relax . Thanks for sharing

I agree the exhaust throttle should make it more controllable...I just got these home-made TD09-size throttle rings from the local manufacturer, and will tach the engine with them to check throttle characteristics. 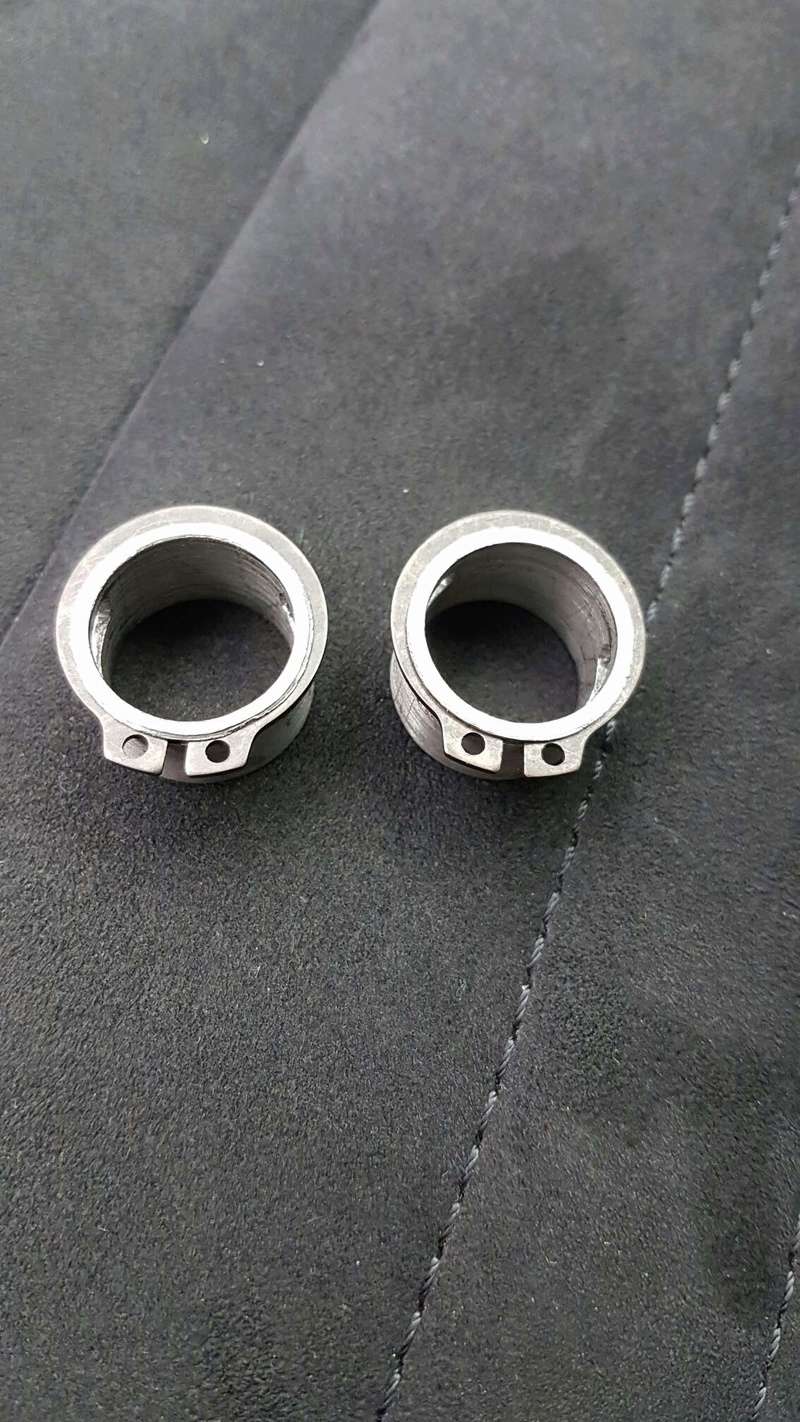 In addition, I will have to improvise some deflectors applied with the throttle ring, otherwise the fuselage at the engine cowl area will be burnt.

Bit rich was still in break in mode but managed to sink to 6300 + rpm at best
Using a race prop wont give you the lowest idles but gives you some idea
what is possible with a throttle sleeve. MA 5.5x4.5