This is my flight report for the 2016 flyathon. Others can post your reports here if you wish. Or not...

So, we were blessed with very low winds, the only problem is they were very variable. The showing of Ringmasters was not what I expected as we only had 2 planes showing. I had my work cut out for me. In total we knocked out 21 flights. 13 of those were mine, doesn't seem like much does it? To break it down though, each flight is roughly 8min so simple math puts my 13 flights at 104 minutes of flying.

To compound the problem my Buddies Ring conked out in a bad spot during his first flight. Nose down into the terra firma. Shattered the inboard wing! Down to one plane now which is why I knocked out 13 flights.

Not to be beaten Daryl grabbled the CA and went to town, he managed to repair the wing and cover it in scrap monokote. 8 flights total on his!

So we had a good day, my feet are sore this morning. I am attaching a few pictures and a short video of me goofing around.

I'll have to post pics and such later as the toolbar has dissapeared on me...weird.

Wow.. did you two fella's fly locally, or is Daryl on the work-team that you travel with? (just curious..) OTOH.. it's probably not easy to take a RM on the road with your job.

I have to admire Daryl's spirit (as well as being prepared..) to fix his airplane at the field after sustaining that kind of damage. I take it that there was access to 110V for him to use an iron to repair his covering? I have a couple of 500w inverters.. but have never used them at the field. I don't know if/how well one would work, using a small capacity 12V source-battery. Maybe he connected an inverter to his automobile's battery?

Kudos to you both for carrying on the tradition and getting some flights logged!

Philly Fliers had a fun fly in Reading, Pa today. Due to poor weather misty rain and fog many had passed up a great flying day. I had a blast, I practically burned the gallon of fuel I brought today. I had many flights in today.The Ringmaster was burning up the sky as well. I put on a first edition Fox Combat special which really put the coals to the old girl. It really did the old Ring some justice as it hauled it around effortlessly. Since the Ringathon began years back my son and I and the club rarely participates due to other events generally being held that day. Every day at the club is usually a Ringmaster day. For the record today, we put up two flights and the rest was dedicated to some stunt flying.

Glad you guys are getting out there to represent CEF and your own organizations. I'm still calling it "Maybe next year," as I usually do. At least I have two kits now, an 18" w/s Micro Ring Stunter and a super tiny Micro Ring profile. All I need now is an engine.
Ringless Rusty
_________________
Don't Panic!
...and never Ever think about how good you are at something...
while you're doing it!

Boy I would love to add some vid and pics! This is downright frustrating. Anyone using an apple device and having a problem with no toolbar showing up?

I have to learn how to do the whole video thing. I have exposure to some extremely cool stuff. Today we had dual pulse jets in the air and just a lot of neat things that most don't experience. Our video taker Rich for some reason pulled a no show today. I have taken video on cell phones and they've made it as far as the desktop but that's pretty much as far as I can get them. Ken

I had three planes ready to go. An electric RM from Brodak, a Baby RM, and a Beginner RM. Friday afternoon my wife went into the hospital, and I've been there ever since. I did not get a chance to fly this year....

The Missed Out Mark

Friday afternoon my wife went into the hospital, and I've been there ever since.
The Missed Out Mark

Heck Mark, hope everything's ok. Flying planes is fun, but nowhere near as important as being with your family when they need you.

Cribbs74 wrote:Boy I would love to add some vid and pics! This is downright frustrating. Anyone using an apple device and having a problem with no toolbar showing up?

Yes, I just looked at post a reply on my iPhone and iPad running IOS and there is no toolbar, on Macbook Pro running OS X the toolbar is there.
Very strange indeed.

Glad to know it's not just me.

While I may like to take the credit - this is Ron's video. I just took his link and inserted it.

My day stated with one problem after another so unless 2-3 sec. flight I got in 0... The engine that ran great day before now has a fouled plug then didn't want to start or run crap with new drop in and the adjusting needle at 1/2 turn to run we tried to put it in the air for its maiden ! Went right into slack lines and a BIG loop to the ground //broke the prop , no biggie , I thought maybe left handed prop got the spring and prop installed , this engine did not like or want to run that way

got of the runway a few feet and into the ground (lack of commutation between me and son) Was tring to get it started again and all of a sudden with a prime we had a FIRE!! Well I threw the plane away form the other fuel and the prime on the take off strip , we had no rags out there for a change only paper towels and it was not wanting to go out (((( my son goes over and was going to pee on it O NO I said

well he took his paints off and smothered it out 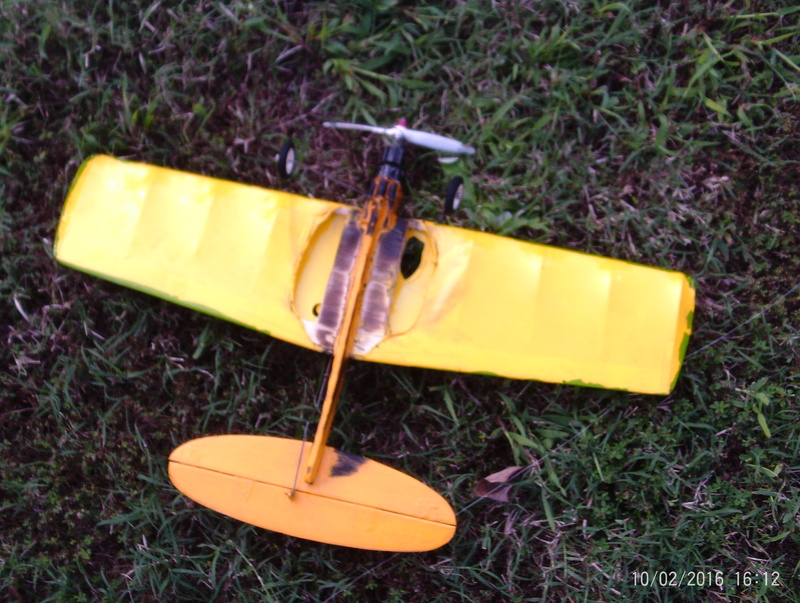 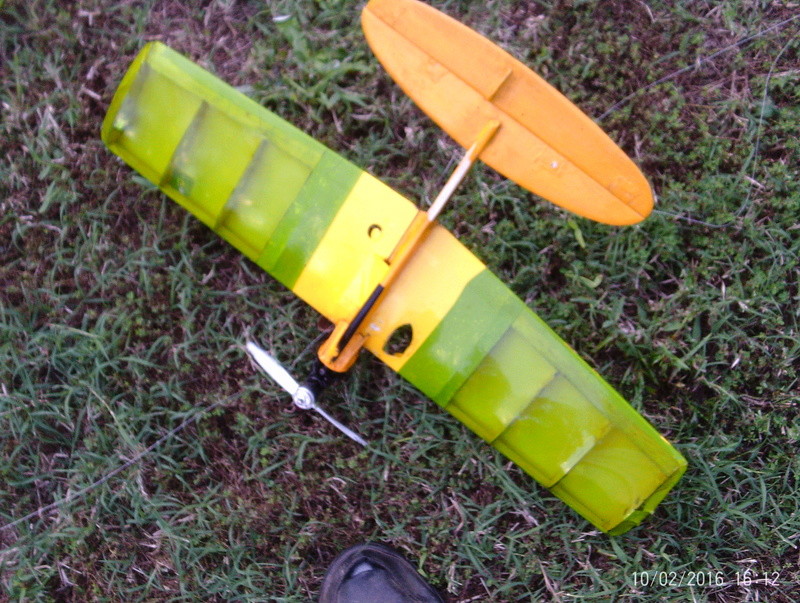 I was done after that BUT, I let my son fly the scratch built PT-19 I made , He done really well and have some video as soon as I get it loaded I will post in another thread . Thanks for watching !!

Well Eric, that's a bummer. Glad you can

about it... And I just can't resist posting this:

Yeah, you looked great out there Ian!!!

Sorry for the laziness...just figured I'd do a direct copy from my flight report to the RM site.


On the first day of our Fly-a-Thon, I made the one hour trip to Chester, Illinois...home of Popeye--yes---The Sailer!

My new flying bud, Billy Lang, was waiting when I arrived at the Breezy Hill R/C Flyers field....which was pretty much shrouded in fog and mist.  As the mist turned to light rain, Billy fueled up and got in an initial flight with his S-1 Ringmaster. His Ringmaster would become the workhorse of our Fly-a-Thon, as he shared it with two of his fellow circle-turners.

He also had an .020 Pee Wee-powered Ringmaster that, in spite of suffering a broken back, still managed to log two flights.

I had my well-traveled Super Ringmaster (that spent the first two hours under a tarp as the rain increased) and my Go Pro-packing Bird of Time R/C sailplane that I hoped to use as a drone to get a few photos from above the circle.

Billy's two buds, Leo Edler, and Darryl Wilson arrived as the rains tapered off and the planes were fired up.  Leo had never flown a Ringmaster, though he's flown a lot of control line, including a Goldberg Voo Doo combat wing and Bi-Slob he brought out..  Leo would tie with Billy, each getting 7 official flights on the hard-working S-1.

Darryl would log two official flight on the S-1.

We ordered up some pizza and had us proper feast under the club's spacious shelter...just about as good a time as it gets.  Lots of stories and laughs about past adventures...successful and otherwise!

Brian Dudenbosiel would log an official flight on the .020 Ringmaster after several attempts, with Billy logging one flight on his fast turning little plane thanks to a deft application of some CA to it's broken spine.

I got in a couple flights with my Super Ringmaster, along with launching the B.O.T. to get some video.   Later in the day, Leo and I would team up to fly my Super and Billy's beloved S-1 in the same circle.   Billy sure is a trusting soul!

We managed to get in two flights with neither plane getting any prop marks!  We were all getting a bit tired, but Billy logged a couple more flights and Leo took a turn at demonstrating the Bi-Slob's playful antics and blasting his Voo Doo around the circle.

The rain really rolled in around 4pm, so we packed it in. Gonna join the Breezy Hill R/C Flyers and, for sure, will be heading back up to spend some time with this great bunch of guys.

The event was covered by Pete Spitler, Managing Editor of the local Randolph County Herald Tribune.

I was pretty tired the next day, and so, opted to put in some flights with my Ringmaster Beginner's Bipe in the front yard.  Got four flights in, bringing our weekend total to 25.

'Til Next Year Kim Stricker 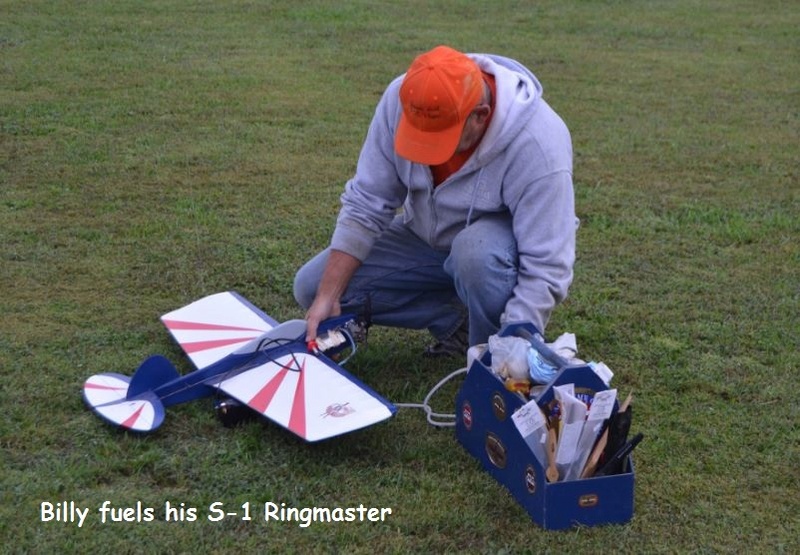 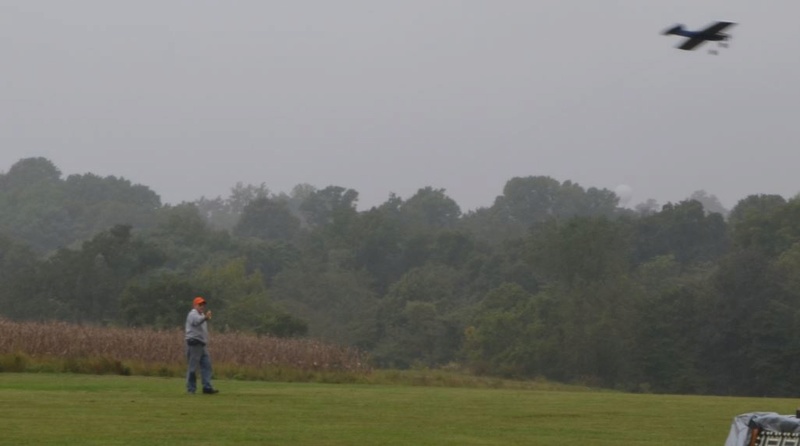 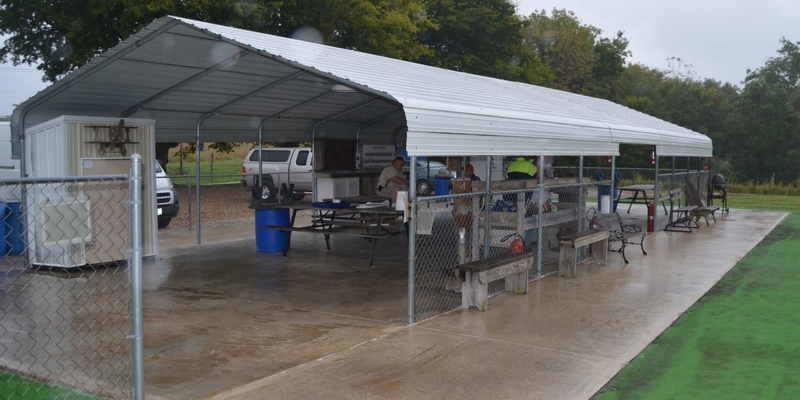 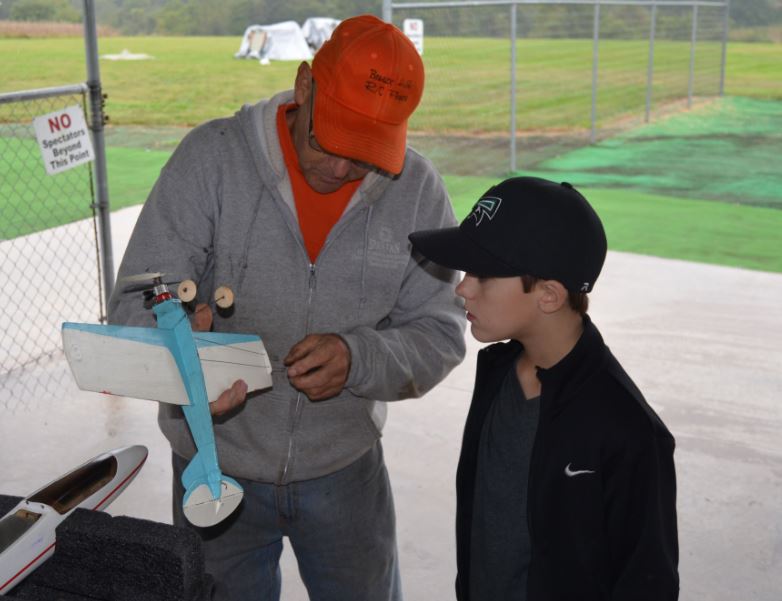 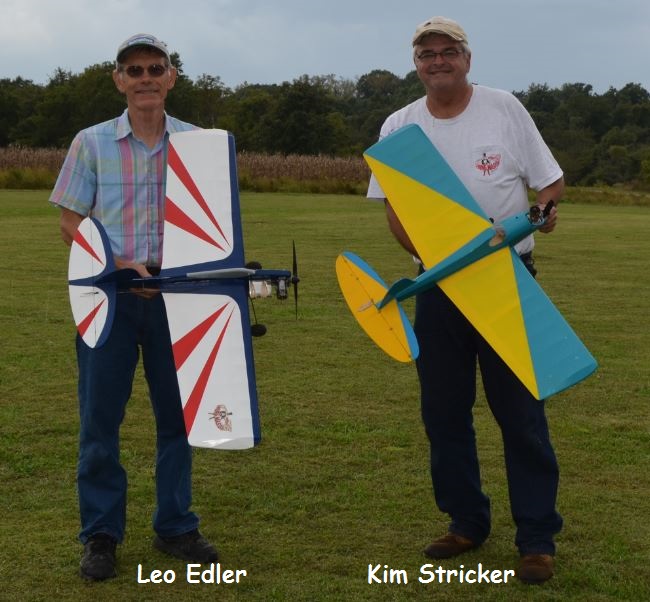 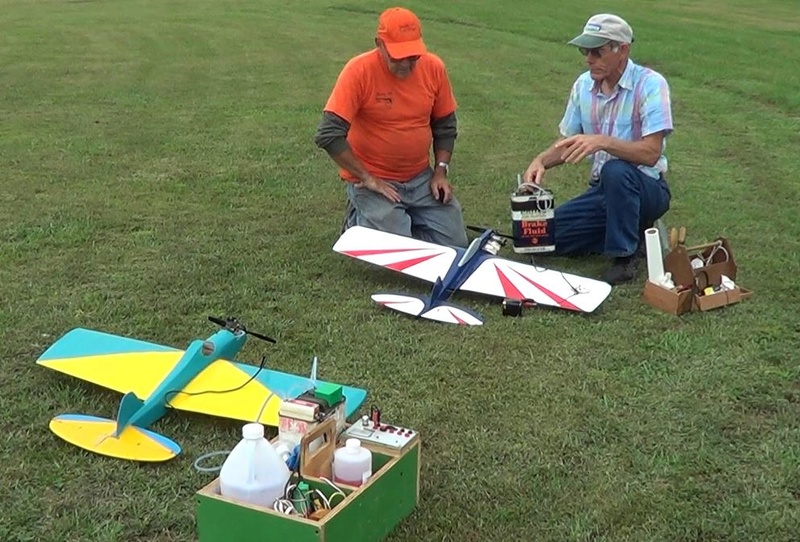 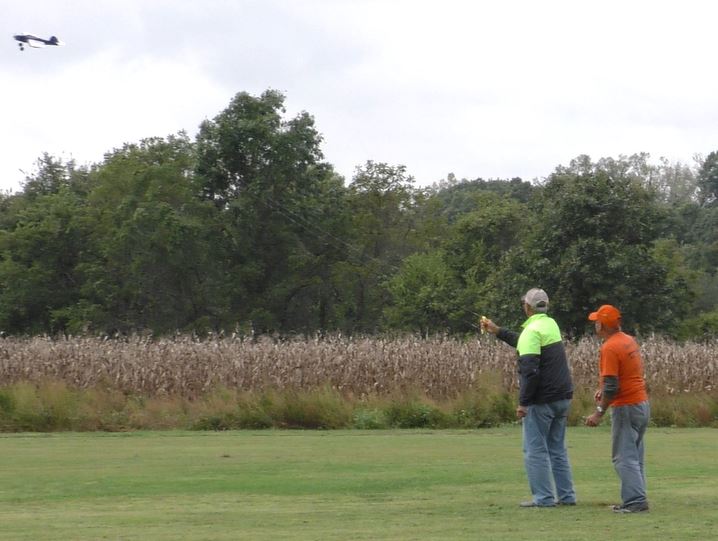 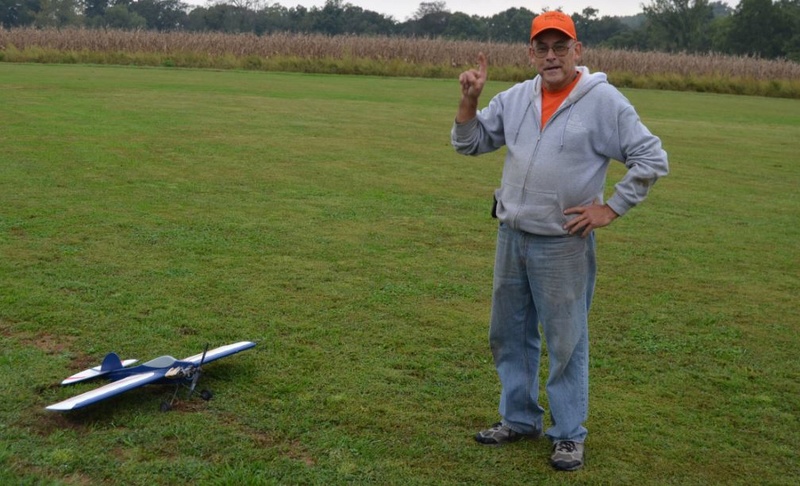 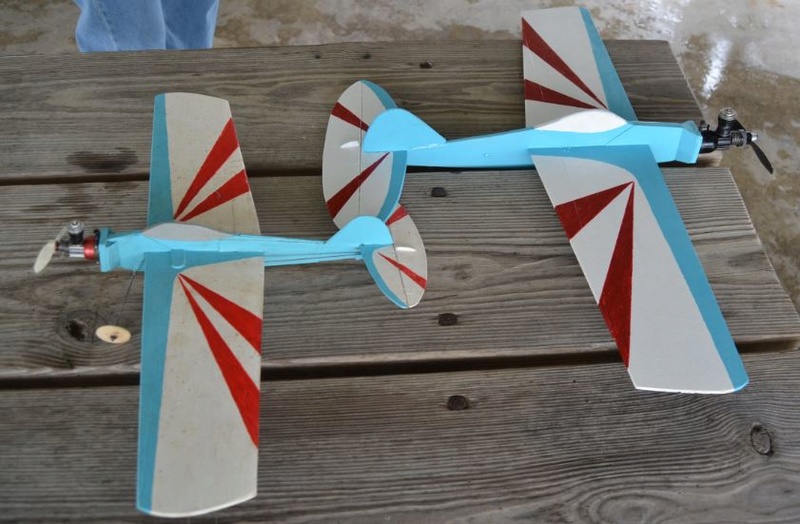 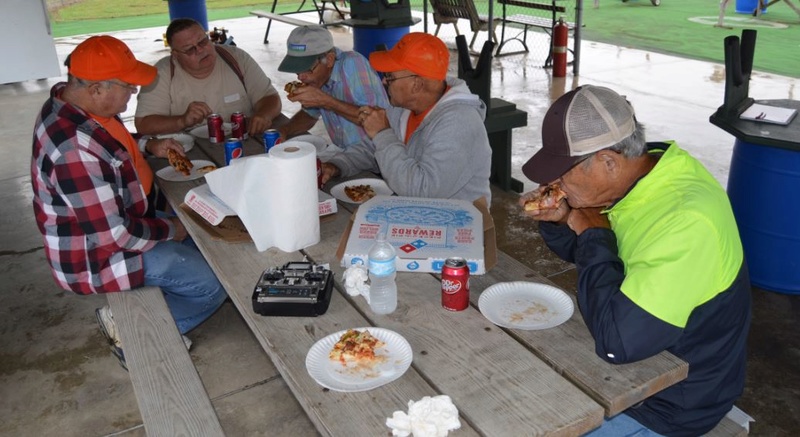 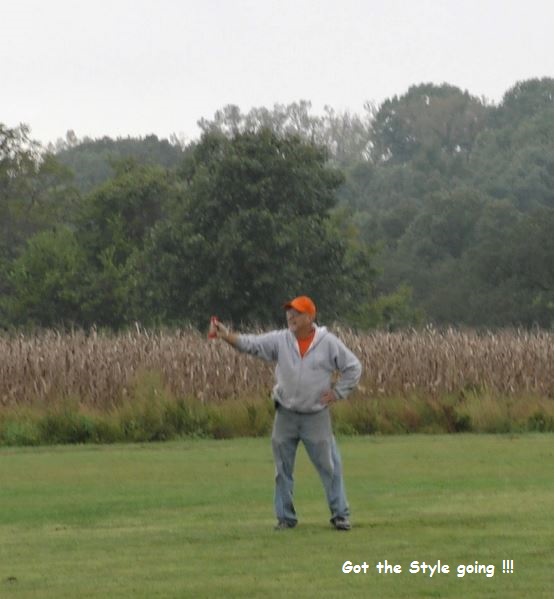 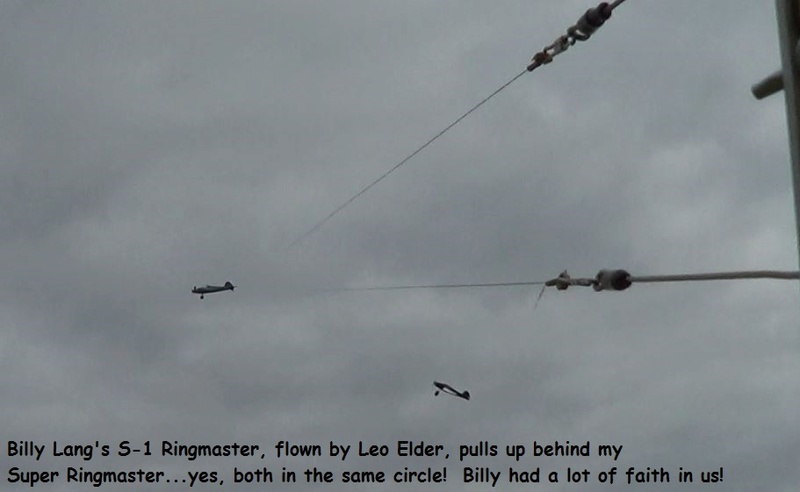 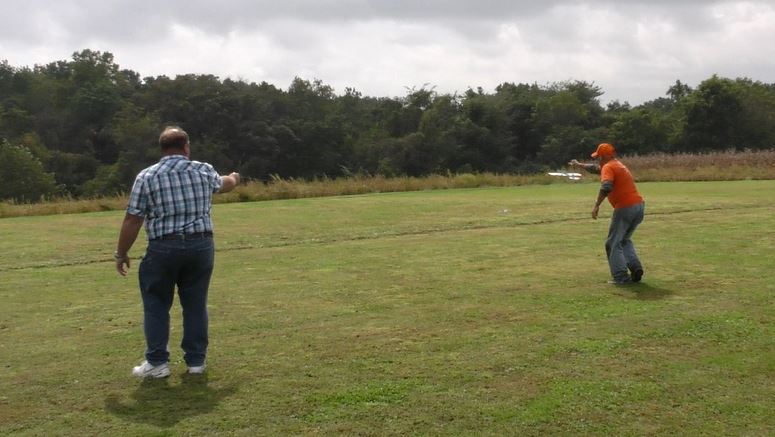 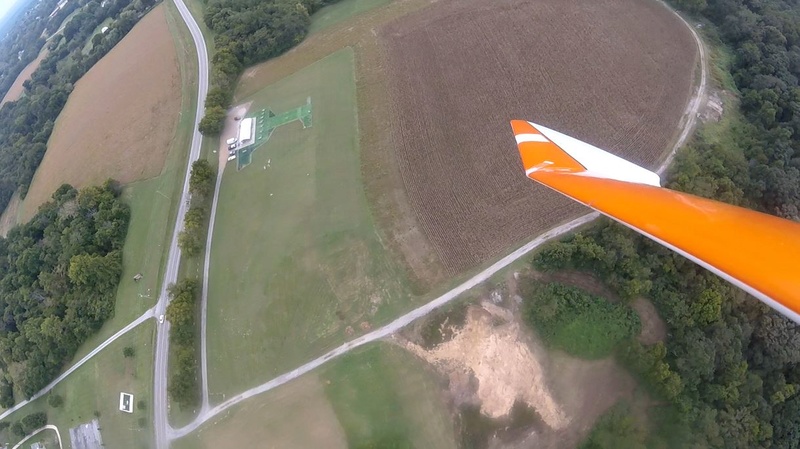 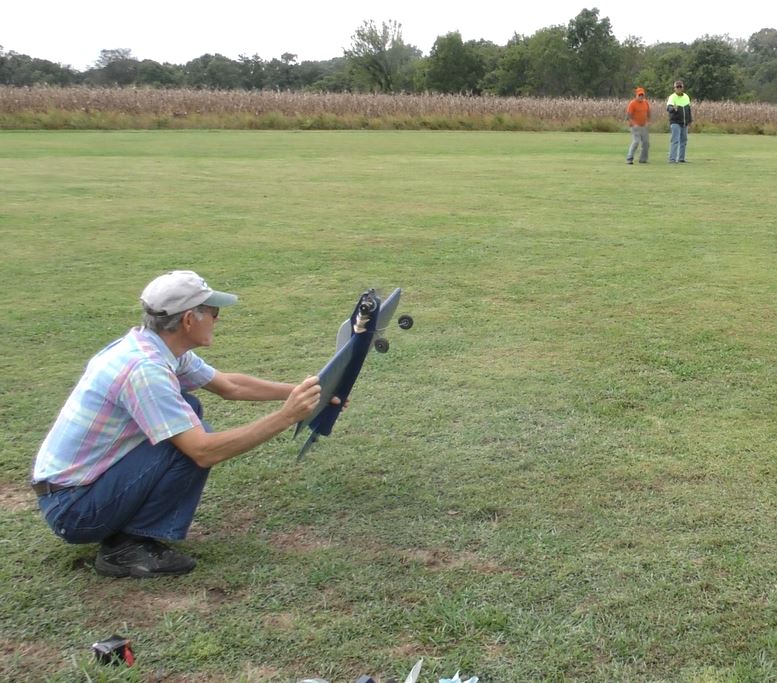 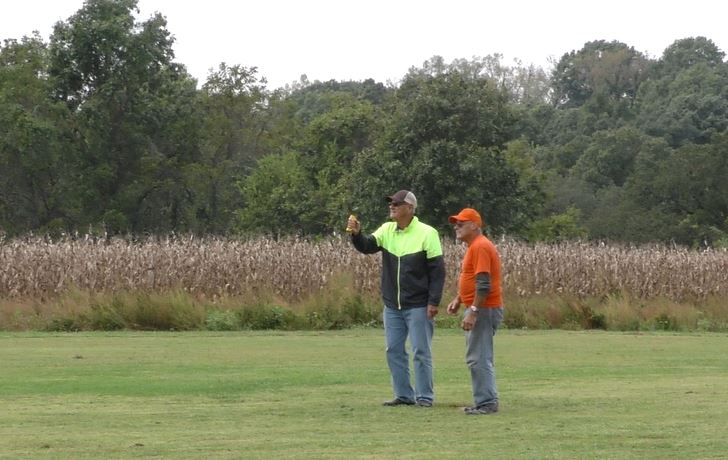 Great pictures Kim, I really like the one looking up the lines during the tandem flight!

Maybe they used olive oil? I hear you can get it with garlic flavor too

Cribbs74 wrote:Great pictures Kim, I really like the one looking up the lines during the tandem flight!

Billy was saying he wasn't worried about us using his newly acquired S-1, but I had to wonder!

I was happy to just make laps, but Leo  got a little frisky, pulling Billy's Ringmaster up behind mine as we passed.  I was sort of absorbed in NOT smacking Billy's plane, so the video I shot is just a bunch of whirling trees and clouds, with a few guest appearances by the planes.  I wish I'd richened it up a bit so we would've had closer speeds, but betting we'll do this again.