» The New Normal?
by GallopingGhostler Yesterday at 11:51 am

I finished my last project of the year. It’s a new Wing Ding.

Every time this plane was getting high in the sky, it became difficult to see, so I came up with the idea to make a bigger version. This one has a span of 1.100mm and has a QZ. 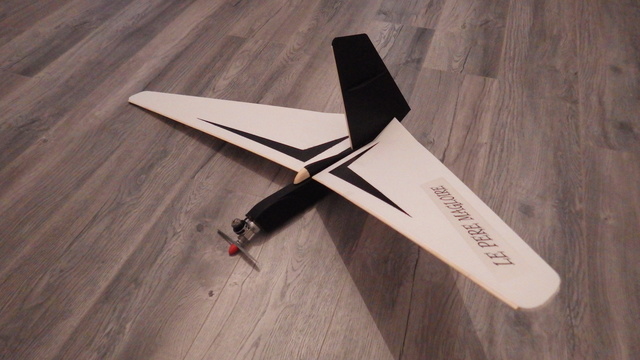 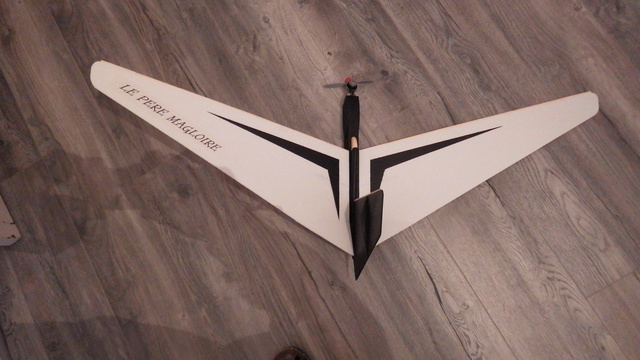 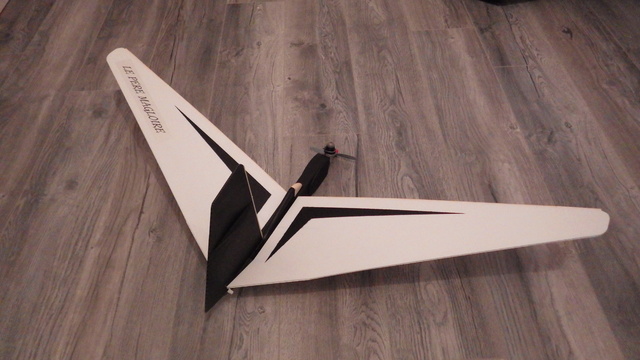 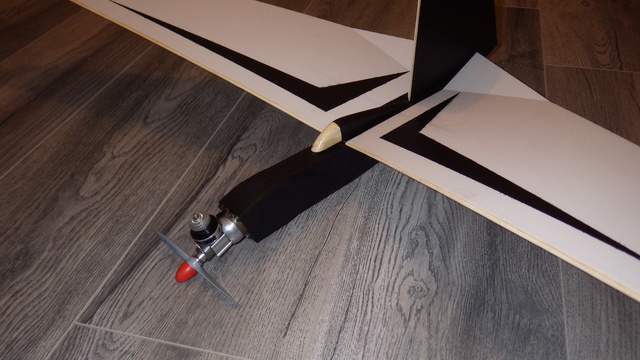 The wings and tail are Coroplast. All other parts are wood. The fuse had two coats of dope with sanding before being covered with silk paper. I finished with a few more coats of dope with sanding in between and painting. Initially, I lengthened the fuse with 4cm as I thought the CG would be too far back but that was a mistake. I cut the fuselage in half and removed 3cm. The wing is epoxied to the fuse and I added a few brass nails for strength. I found a better solution for making a leading edge. Before I used sticky tape. That works but it gives an irregular finish. Now I made rounded strips of balsa with the same thickness as the forward channel. That can than be slid easily in place and glued.

Some pictures of the build: 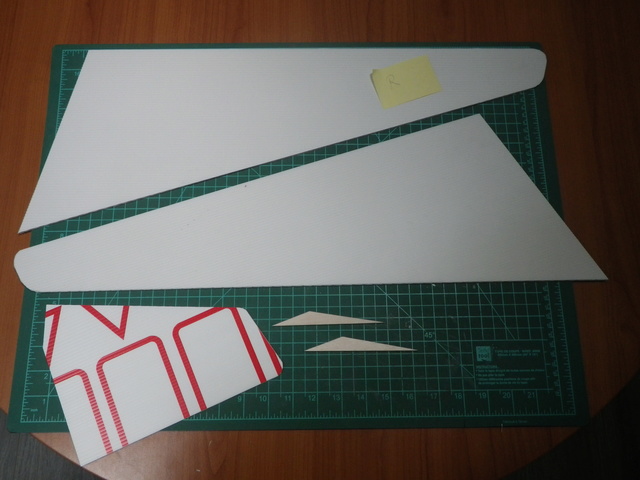 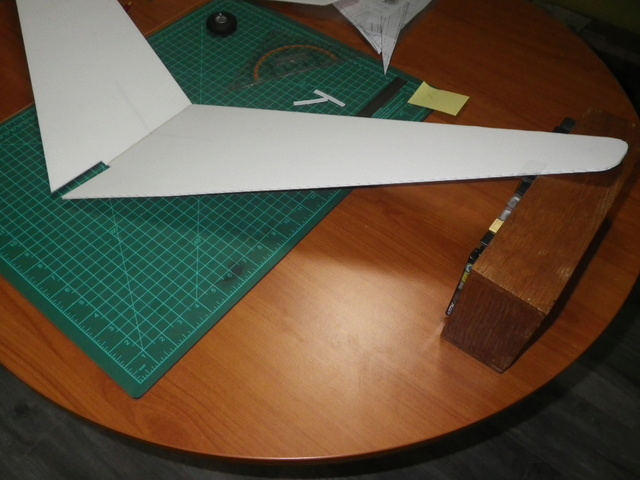 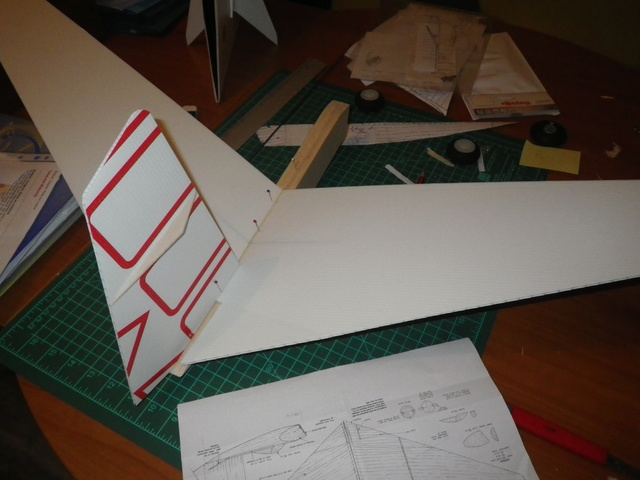 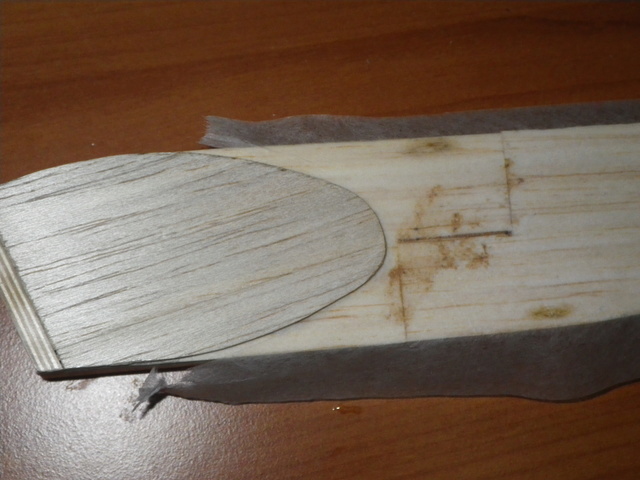 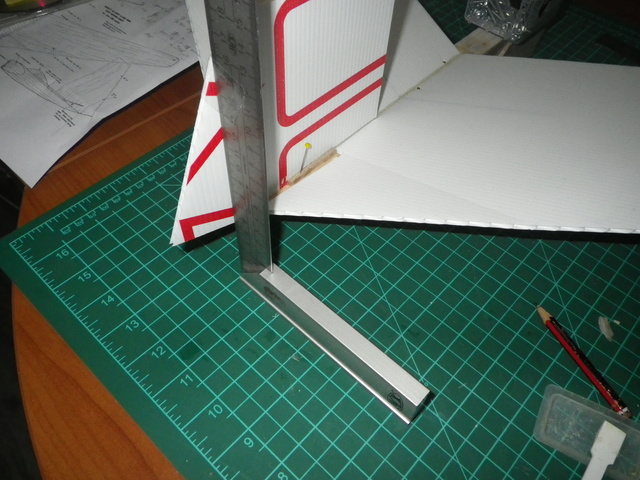 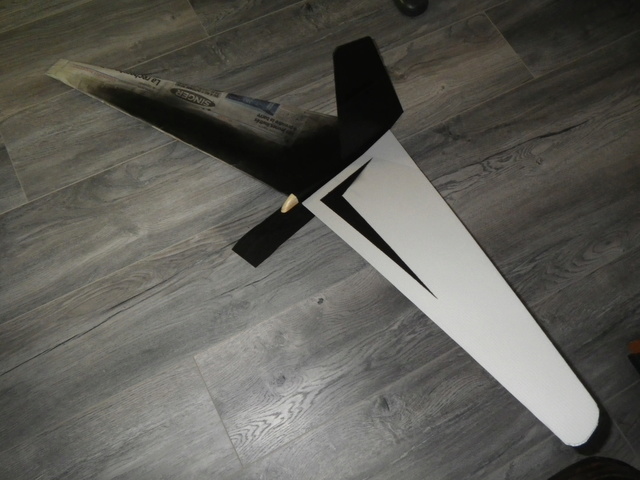 This evening, I did a few gliding tests before it went dark and after a small adjustment to the stab, gliding was OK and straight. I hope for some calm weather without wind tomorrow or the coming days for the first flights!!

More great designs Lieven. That coroplast sure is versatile and lends it's self to our hobby.

Coincidentally, yesterday I was looking through weird aircraft and found this X29: 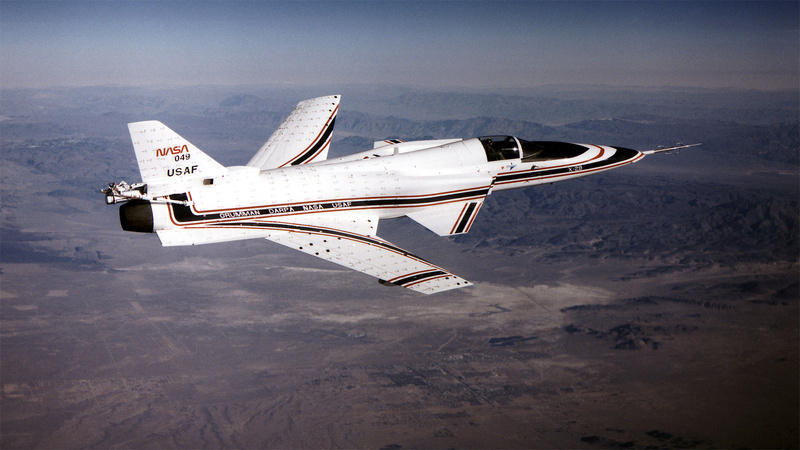 Thanks Bob, a great design maybe but not a gear flyer. i tried the plane just before noon time. The prop was a careful 5x2. I was afraid to generate to much airflow that would end in the plane making loops after circling and the fatal spin down. When I threw it in the air, the plane did not gain any speed and it stalled, then making a few tight turns to one side but without climbing and finally hitting the ground. I reduced the flap angle to make it flatter but that wasn't any better. I also put another prop on with more pitch witout any results. I always had 3 things going on: no speed, stall nose up sometimes followed by slow loops or a few circles and a spin down. Finally the fuse broke and that was the end. I must say that the heat proof paint is resistant and doesn't move at all. 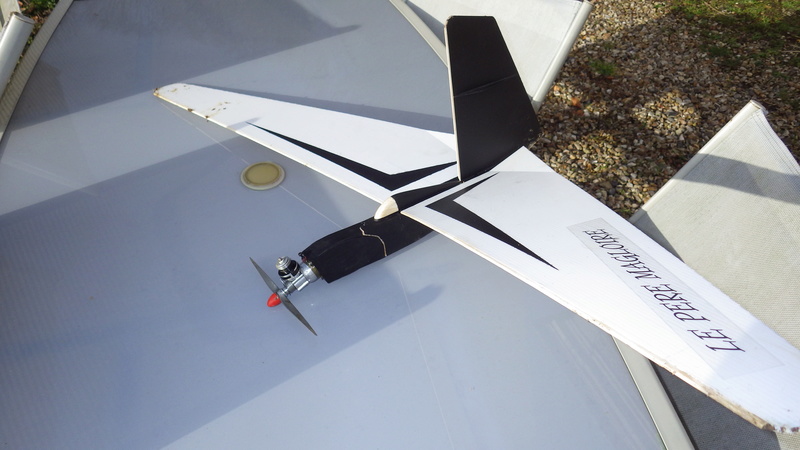 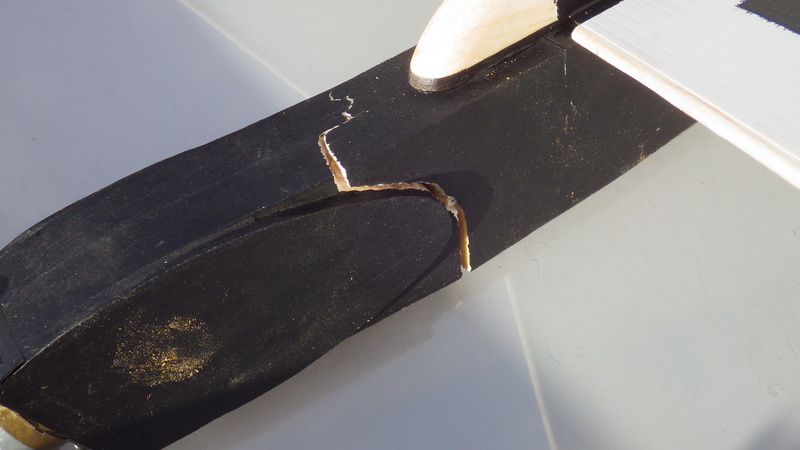 When looking at it now, the flaps were probably at the right angle as the plane had a good glide. What could cause the stall? The engine being too much nose down and blowing air under the wing surface instead of on the leading edge? I read some articles about forward swept wings and caracteristics but it's quite complicated matter.

Some tailless forward swept wing models have wash-in at the tips for stability. On the other hand if the wing is not stiff enough, the leading edge at the tip can lift wich leads to the fatal spin down. Why should wash-in be built in in the first place?

Any aeronautical engineers on the forum who can see what's wrong?

I must have missed your smaller original Wing Ding post.

Too bad about the broken fuselage, but it looks fixable. How did you determine the engines thrust down angle? Seems like that would be a most critical factor in the planes performance.

I looked up "Wing Dings" and found this design. Quite attractive in it's weirdness. 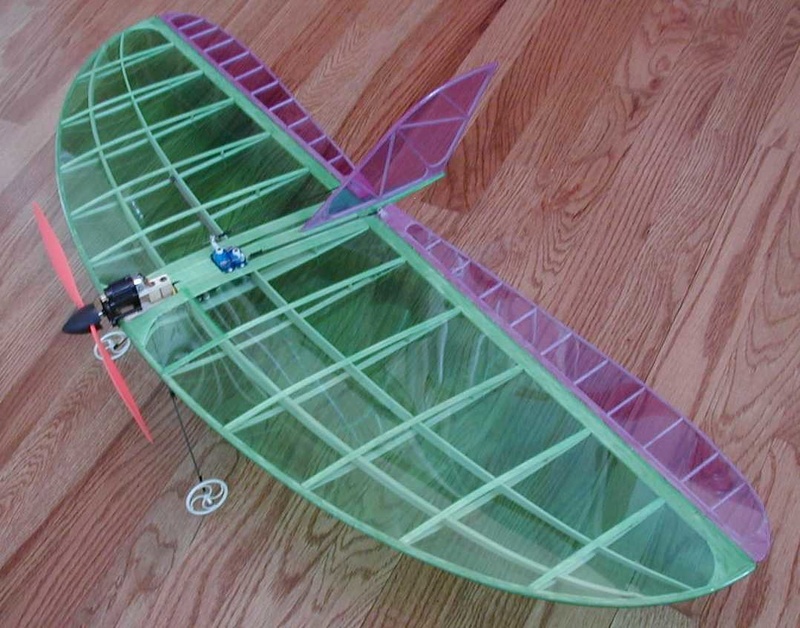 Bob, The plan can be found on Hip Pocket Aeronautics. I didn't determine the thrust down angle. That was taken from the drawing. On the original smaller model, that doesn't seem to be a problem. Maybe on this one, it is. I glued the fuse already and it is drying.

The only problem I see is you have a babe bee with a muffler on it. That is a large plane for a babe bee to begin with and muffled it brings the power down even more. I would go with a TD on that with a 5x3 as a minimum. Did the plans show a babe bee?

How does it balance out? From the picture it looks like it could easily be tail heavy.

What the heck is the w/s in inches ? How much bigger is it than the one it shows at HPB for a TD .010 you may have too much power for a glider , you have a lot of variables going on there as to what its doing in the air .

There it is now, high up in the trees!! 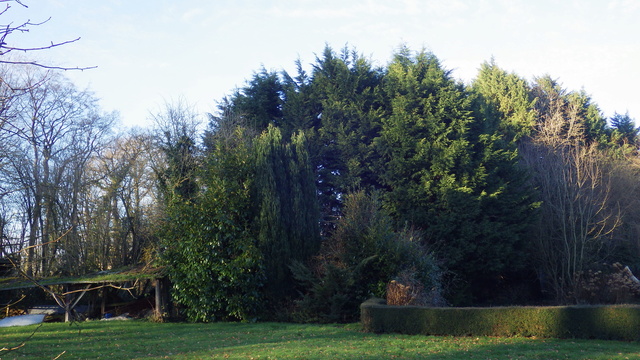 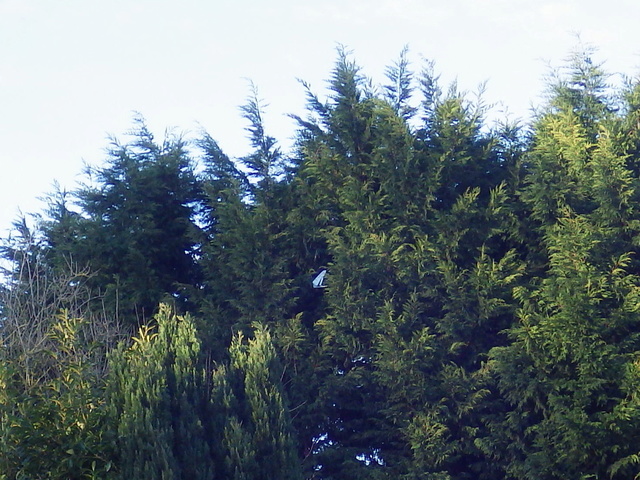 Thanks Ron and Eric for your ideas and help. The plane should not be under powered. Some FF planes with a similar span (43") and almost double the weight have Babe bees. This plane only weights about 250g or 9 Oz. Eric got me on the right track. This plane should be considered as a motor glider and not as an airplane. I looked up Graupner plans of motorized gliders as the Jolly and the Filou. The jolly is a free flight glider with a span of 1.200mm and a weight of 230g. The accessory pylon for this glider is made for a Pee Wee. For the Filou, slightly bigger,Graupner also recommends a Pee wee for free flight and a Babe Bee or QZ when equipped with RC. Graupner indicates a weight up to 650g.

After the disappointing first trials, I cleaned plane and engine thoroughly. After mounting the engine, I carried out new gliding tests in order to fix permanently the position of the elevator. I then fixed a ballast of 15g on the bottom of the fuse in way of the CG. Another gliding test showed a glide in a straighter line and several belly landings without flipping over.

For further testing under power, I kept the standard head on th QZ and turned the 5x2 prop the other way around. I used my neighbours garden to keep away from the wind. The plane remained flat without loops or other strange behaviour. However it didn't climb much and landed with engine running. A second test with the prop mounted the right way gave better results. Although the engine was kept rich, the plane climbed nicely. The engine stopped in time but the tree was too close. I'm waiting for some wind to get the plane back.

By making the plane a bit heavier, things should turn out well. i'm planning to replace the weight by a landing gear.

I knew you'd get it sorted!

So did you effectively make the angle of incidence a bit smaller to avoid the wing "grabbing" and then moved the CG back a little to keep the glide? Or did you add the weight just to maintain air speed? Flying wings are something I am not very familiar with... I used to play with "canards" a little though

Landing gear would be a good idea for adding "functional weight", as our friend Roddie would put it, but it will also move the vertical CG lower, helping stability.

Anyway, if it ended that high up in the tree under its own power, that proves its flying capabilities

Good deal !! sounds like you added weight for the more power as if an RC would have . I guess receiving a landing gear is easier than replacing the engine with a Pee Wee , of coarse it was intended for the BB >

No I didn't change the angle of downthrust. My plan was not to change too much in one go. The downthrust will be needed to avoid the plane from climbing too fast. The distance from where I launched it to the tree where it sits now is maybe 60 or 70m so that climbed very well. The weight was added to stabilize the plane and to give the engine more load... and it worked!!

I had a Pee Wee ready that I took off from another model but I screwed that on again. I wanted it to be this engine. After all, a QZ also deserves to be mounted on a plane.

It's cold over here. I think I will get my snowplane ready!

rsv1cox wrote:That's a beautiful tree although you may not share my opinion just now

bob, they're giant thuja's, I don't know if that's the same as a hemlock.

I have some 3 to 4m high reed plants in my garden and I cut a few and taped them together. I went over to my neighbour's garden and wiggled that long tall stick in that thuja where I tought the plane was. I could not see the plane from below and had to step back each time to make sure I was in the right spot. Got it in the end.

rsv1cox wrote:That's a beautiful tree although you may not share my opinion just now

bob, they're giant thuja's, I don't know if that's the same as a hemlock.

I have some 3 to 4m high reed plants in my garden and I cut a few and taped them together. I went over to my neighbour's garden and wiggled that long tall stick in that thuja where I tought the plane was. I could not see the plane from below and had to step back each time to make sure I was in the right spot. Got it in the end.

Got me thinking, searched "hemlock tree" and came up with this:

Today, we had cold but nice weather , open sky and no wind. This was a great occasion to test the plane in the field. Settings were the same as the moment it dissappeard in the tree:

1) additional 15g weight to the fuse in way of the CG
2) 5x2 prop mounted the "normal" way
3) QZ with standard head, not the high compression head.

After a few flights it was obvious that the plane circled to tight to the left an the glide back was in a straight line. I then mounted the prop the other way around. Flying was less aggressive but more like a roller coaster up and down. I then noticed that due to the crash in the tree, the added weight had moved a bit forward. Once this sorted was a step in the right direction.

I made a video but still need to assemble the fragments. Some pictures: 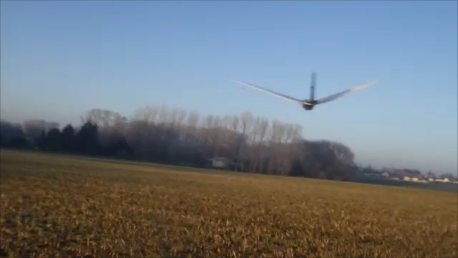 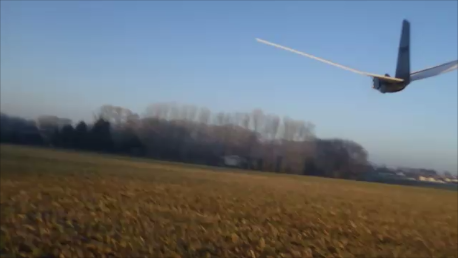 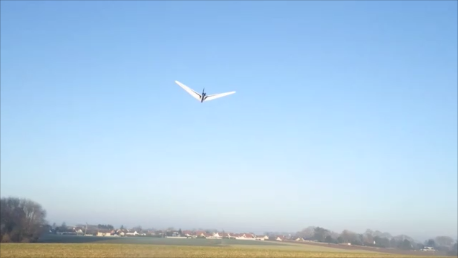 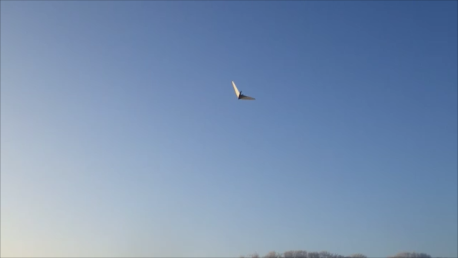 That's Great !! The model looks good fling and will be watching for the report

I got the video together.

The final settings are as follows:

Temperatures were about 0°C. I made a total of 7 or 8 flights. I wanted do do some more but the weight that was still stuck on the fuse with sticky tape started to come loose.

Another fine model and just in time for the year end!

Thanks Ian. Both flights on the video were made with a full tank. I guess the pick up tube in the tank is a little short and cannot reach the bottom of the tank. I remember when assembling that the spring was a lot longer (or maybe the tube a lot shorter?)

I replaced the 15g lead weight by an aluminium skid of th same weight. It's made of T profile from the DIY shop. After determining the right position, it was fixed with 2 brass screws and époxy 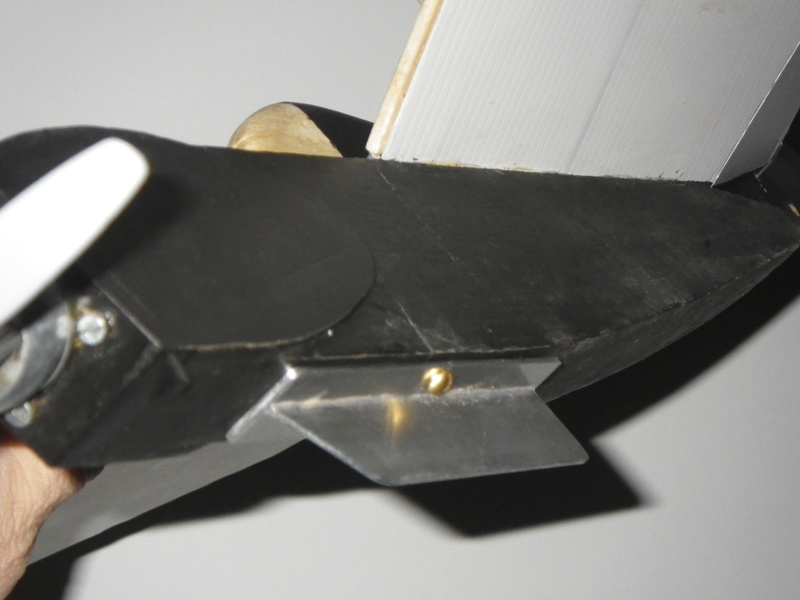 This is a picture of the original .020 powered plane next to the bigger version. 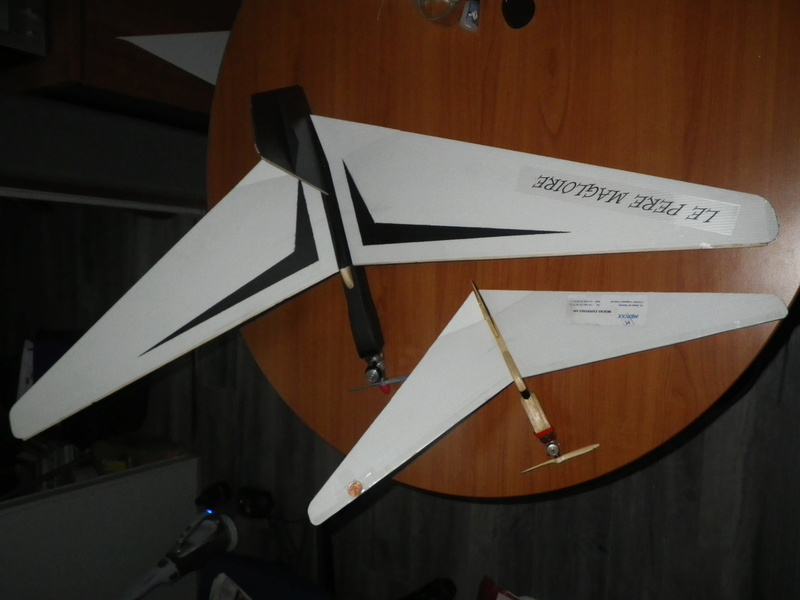