It was good for me to get back out. It's the first time I've been able to try flying with some success and fun since my pinched neck-nerve incident during a wingover in November. I managed to do all the 45 degree stunts well, but still can't do anything that requires looking up higher than that. Even the low stunts were shocking me some from the waist down, but I'm getting a little more used to it. It only happens when I'm flying, how strange is that. But the exercise and camaraderie was refreshing and so was finishing the day once again with a smile on my face.

70 degrees with shifty thermals driving the RC guys mad. "How do you control line guys manage to fly in this wind!?!?" Lol, they always say that. We had a good turnout for a change. Three RC guys were there all day. You'll see them in the videos and pictures.

I flew two flights with the Wind warrior Cardinal, careful on the first flight, and only a few assorted types of loops, and it took me a bit of stick time to stop stumbling around. On the second flight I flew PA style loops, inside, outside, squares, both ways, decent 8s and triangles. I bailed on the exit loop of my sq. 8 only because they were getting rounder, so I just said screw it and flew on around. I didn't do them in order, rather, I did them when I felt confident enough for each one.

Y'all may recall I've said a few times that some day Watt's old fuel soaked, rickety and oft-repaired Cardinal ARF may start falling apart in flight... Yeah, well... today was the day. When I took off, and during my level flight, I felt it bump. Like it feels if a pair of line connectors comes unstuck. Wayne, like any decent pit-man, says they were not kinked at his end while I was putting on the handle. And I walk the lines out constantly tight and closely look at the handle connectors after I'm in position. Oddly the plane didn't really jump either. So I flew all the stunts I described and came into the outside square loops. It did suddenly start hunting for a lap somewhere in there, but it quit with me blaming myself. But it was unusual for this plane. On the second of the two loops, when it came time to pull out of my vertical dive, I pulled on the handle and nothing happened. I yanked it and it started to turn but clobbered the ground. Old repairs and the soggy front end broke off.

Wayne used his inspector skills and we found no convincing problem. One flap was off its coupler, but not ripped off. I am sure it wasn't me, and I'm usually pretty honest with myself after a wreck. And I've had a lot of them. Looked like 2 laps worth of gas left in the tank.

The good news is, I have a spare LA .46. And I have a dusty Nobler just sitting waiting for glue and a power plant. FP .35 or .40 depending on the weight. As for right this minute, the Shoestring is the only true stunter in the fleet. The Twister is a couple of weeks away now that the wing is finished, but I'm very dubious about flying it. I'm pretty sure I'll just let Wayne fly it while we're trimming, and see how I feel after that.

I feel so much better after finally getting out to fly and being successful in my conservative way. I'd say we got the good out of the day. This will help me regain some strength and it gave me a much-needed happiness boost.

I gotta go to bed now. I'll give y'all the video/photo-journalistic version tomorrow.
Rusty 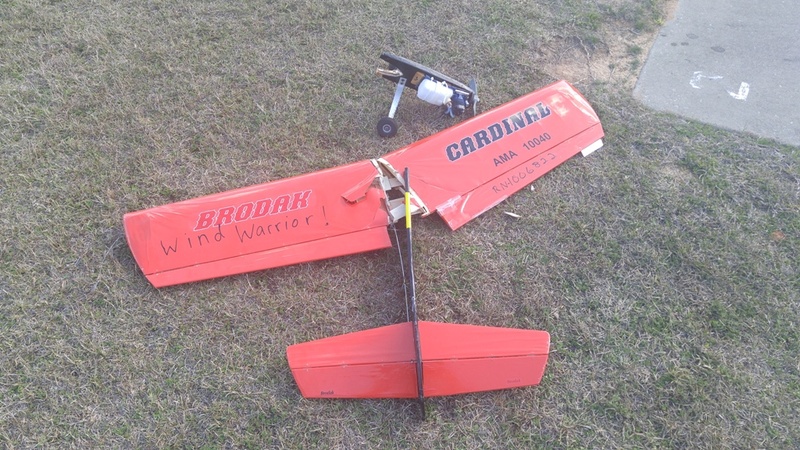 Oh yeah, and look at the new headers on my Yak. Howard Rush printed them for me. 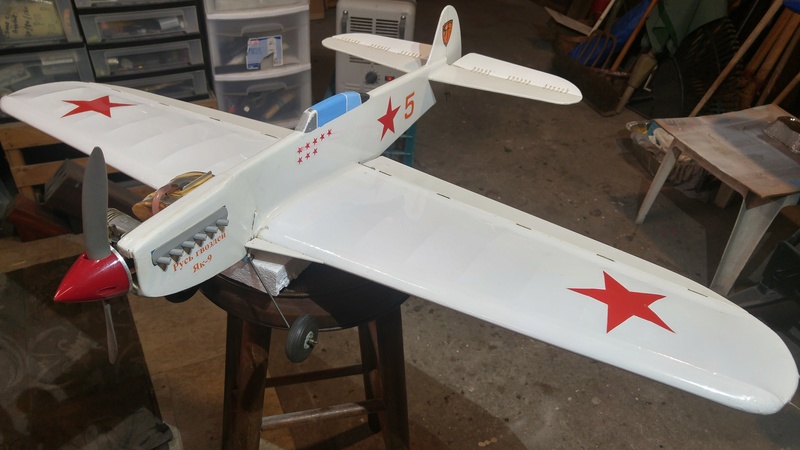 Well, A bad day of flying is better than a good day of work.

I am sure it will all come back, just give it more time. What you are doing now is good as you don't want to stagnate.

Sorry about the Cardinal!

Sorry to hear about the Cardinal, but it IS good to have you out making circles again!

Good to hear you got out and got some air time in , even if it did cost a plane , hopefully time will help with the lighting bolts ! sounds like you're taking care of yourself and being patient witch i am sure is hard to do . That Shoestring just keeping on >>>>>

Too bad about the Cardinal... Maybe there was a loose piece of wood or something inside the wing

KariFS wrote:Great to see you are getting better and back in the circle again

Too bad about the Cardinal... Maybe there was a loose piece of wood or something inside the wing

Ditto.. Makes me wonder if the bellcrank mounting failed. Maybe that bump you felt was a glue-joint on the plate separating. If the plate started to flex, it would explain the "hunting" issue.. later possibly causing the bellcrank or a lead-out to bind or hang-up.

I'm not surprised that you feel the twinges only when flying. My guess is that it's a combination of the pulling on your shoulder, along with adrenaline affecting your posture. I hope I'm not p..sing you off Rus'.. I love ya' man.. and just want to help. It seems to me that flying a big heavy old stunter like the Cardinal.. in the wind.. would tax the limits of your flexibility this soon after your injury. Maybe get a hold of a .19/.25 size airplane.. and see if it makes a difference. Maybe even a "brace" that partially immobilizes your upper-arm would take some pressure off your shoulder/neck? That might sound ridiculous..

Nah, the bellcrank is okay, but I wonder if a flap came loose. That might explain the sudden hunting on an otherwise extremely stable plane. It might have just been the wind causing it too. For that matter, maybe I was pulling out in a thermal downdraft. The sky was full of Qs. I've never been one to deny pilot error, and this really doesn't seem like it.

Now Roddie, why would you be p..sing me off, Lol. No, not at all. But I was also sparkling when I flew the Micro Ring with Ron a few weeks ago. I'm going to try flying with my elbow bent and not extending my arm. That may cause me control trouble, but if it helps I can learn to do it.
Rusty
_________________
Don't Panic!
...and never Ever think about how good you are at something...
while you're doing it!

RknRusty wrote:
Now Roddie, why would you be p..sing me off, Lol. No, not at all. But I was also sparkling when I flew the Micro Ring with Ron a few weeks ago. I'm going to try flying with my elbow bent and not extending my arm. That may cause me control trouble, but if it helps I can learn to do it.
Rusty

Thanks Rus.. I have to remind myself to be careful with offering advice..

Short story.. Our lead-guitar player is plagued by a degenerative tendon disease, affecting the fingers on his right hand. He's a "lefty".. so that's his fret-board hand. At early onset two years ago, he had a surgery that actually made matters worse. This is a guy who has been billed as one of the best players in New England. Currently; his fourth and fifth fingers are bent-closed against his palm. He plays with the two remaining.. and still "tears it up". You can notice this on our current YouTube vids (StilBurnin Uxbridge). He gets upset (rightfully so..) talking about it. His fingers are "raw" by the end of a gig.. and there's some songs that we've had to drop from the set-list.. because he simply can't play them anymore.

Cripes man.. talk about a handful!! Maybe someone can loan you a Jr. Flite-Streak or Jr. Ring?

Rusty, a bunch of the Philly Fliers got out yesterday including myself. The geese however did a number to our other field we typically fly at. All in all it was a good time. I completed some projects that have been sitting now for over a year. We got some flight time on two of our combat planes. Dan was out in full force. Here's one of Dan's latest. You know how Dan has a entire fleet of all aluminum planes including his Dyna Jet all aluminum jets. Here's a pic of a high wing 1940's kit. Many pieces were there but he had to make the cowling. The cowling is a piece of art. The pieces were formed and welded together. The welder that does this stuff thinks the club is entirely nuts. He has welded some very intricate aluminum parts for us. The aluminum is only .010". Dan made a tool to buck up the rivets and this entire plane is riveted together aside from the framed up wing. Power is a Saito .40. J-Roberts 3 line bellcrank.  50" wingspan and truly a piece of art. 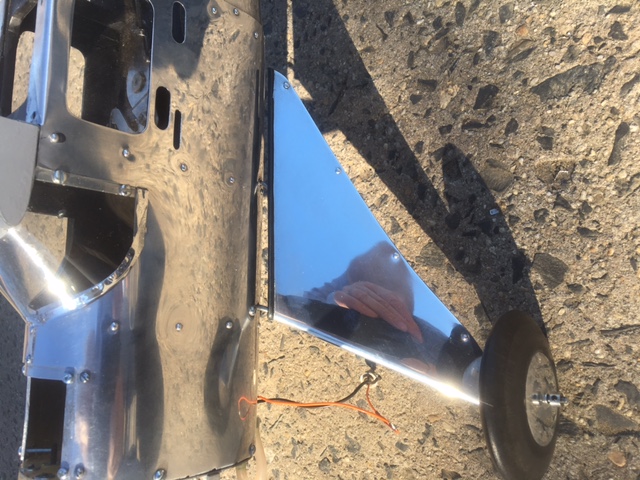 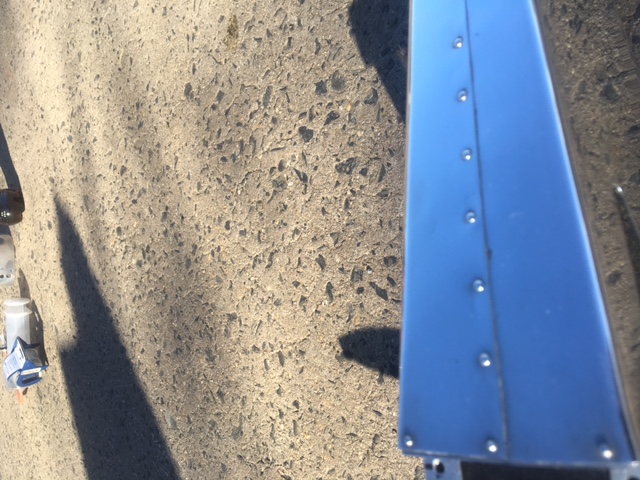 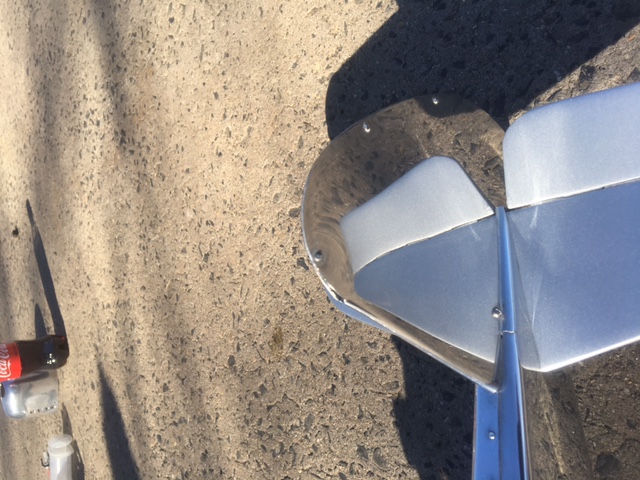 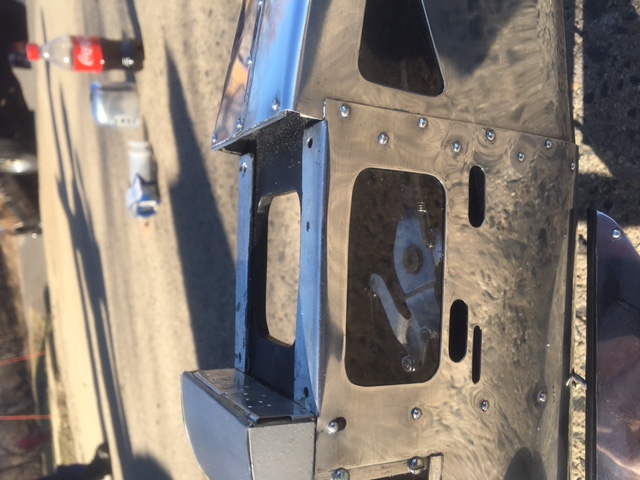 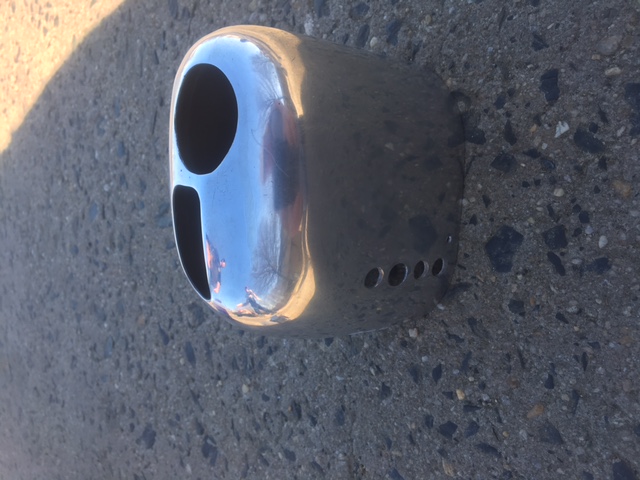 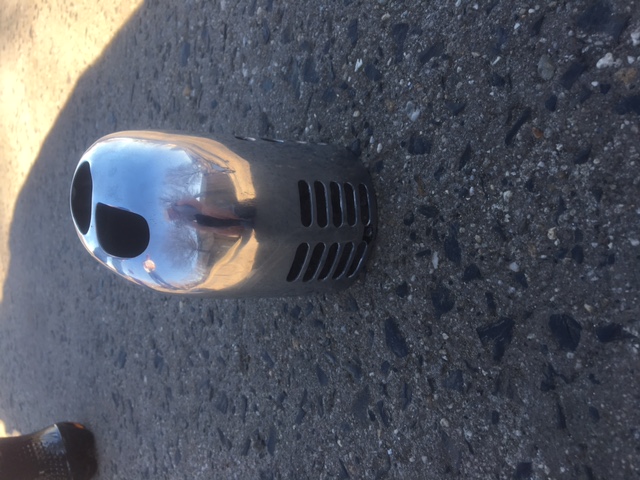 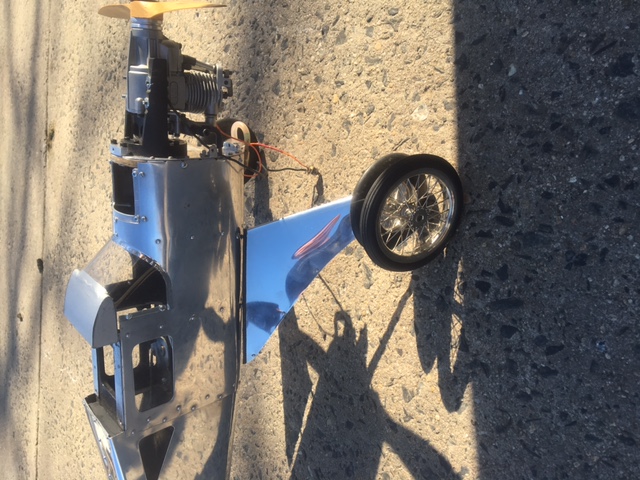 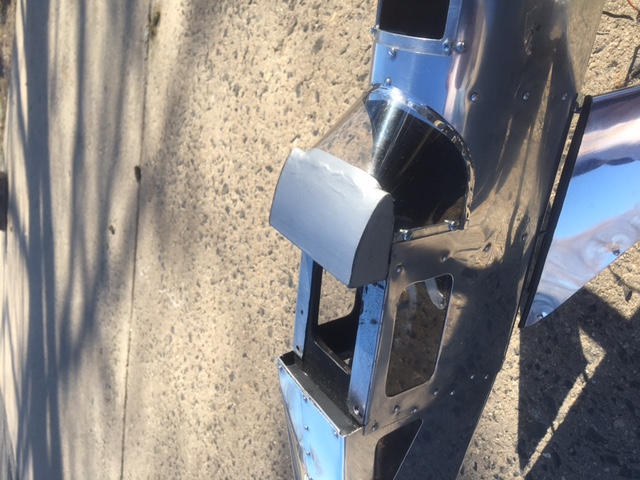 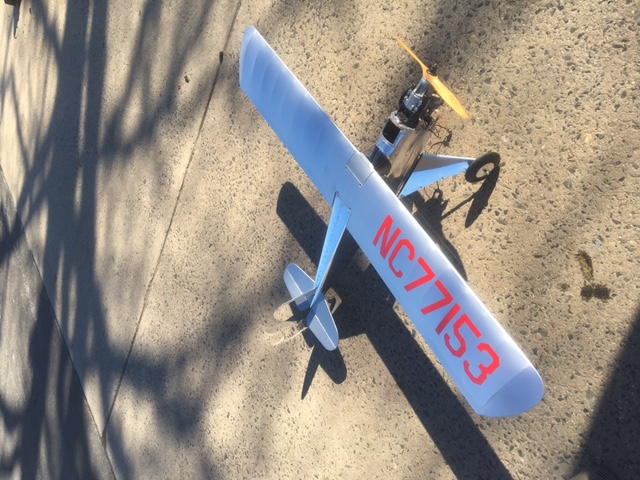 Dan usually brings some samples of his fleet to Huntersville for us to see. What a marvelous craftsman he is. It took me a second look to process the reflection in the rudder in the second picture.

It's always easy to identify Dan's eclectic pit area, strewn with everything from gleaming examples of aluminum like this, to twin cylinder powered stunters, rocket planes, eye-catching scale models, and some truly beatup ancient looking birds, all of which come with a story. A contest weekend is always a better event when Danny shows up. And I'm always glad when you and Shawn show up too.
Rusty
_________________
Don't Panic!
...and never Ever think about how good you are at something...
while you're doing it!

Roddie, Dan has several kits like this. I don't recall the name of the manufacturer. The box is not in good shape.The fellow that originally owned the kit had it since 1951 and realized it was above his talents to build it. As Rusty mentioned, Dan brings these out and leaves them around his car to display them. This particular fellow came up on them and told him that he would be back with the kit. The kits were produced from 1943-48. Keeping in mind that these kits were produced during the war not to mention what they were being made of makes them quite rare. Dan has a all aluminum P-51 produced in 1945 which is outright beautiful. Dan flies all of these models which is even more impressive. Dan is a full time aircraft mechanic.

Ken, seeing models like Dan's is a huge inspiration to me.. as I'm sure it is to most other modelers. Thanks much for sharing.