Log in
Search
Latest topics
» Shuriken 1/2A engines
by BlackWidow Yesterday at 8:03 pm

Almost.  I still haven't added the decals and some touching up.

I still have to finish the lead outs and I always debate how to terminate them either in just loops or add permanent swivels to the loops.  I have done it both ways, swivels on the model and on the lines.  Doesn't make much difference but is there a preferred way?  Also, I'm thinking of using 52' steel lines????

My camo job leaves much to be desired, but the basic air-frame turned out well.  The balance point even with those two Enyas up front is near on.  I ran both engines on the test stand, one ran perfect the other would not.  It took a tear-down and an A/F boil to fix it, but now it exceeds the other.  I mounted it inside. 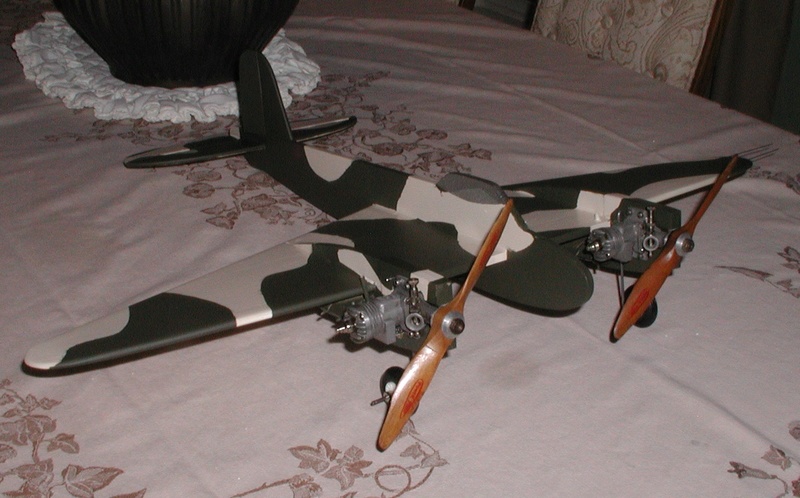 Somehow my camera or the lighting pixellates the paint which is really a dark camo olive drab.

I built the same plane powered with Norvel .061's. Flew it on 45' lines. Very fast and fun to fly. I would caution you though about the nacelles being weak. I built mine stock and found out the hard way on it's maiden flight. The outboard engine nacelle, tank and all, departed and flew about 100 yards, engine still running until it hit the trees. It broke in a straight line right behind the doublers. I beefed both nacelles up with some triangular bass and haven't had a problem since. One other thing, when it gets ready to quit make sure you are low, it glides like a brick. On pavement or VERY short grass it will roll out. Anything else it will flip on landing. Have fun! https://www.youtube.com/watch?v=HJ6n35yB8AU

It's a knockout. I love the paint job.

For the leadout terminations, I recommend not using swivels. They are more prone to wear and breaking than other methods. My own preferred method is brass thimbles and copper-wrapping the steel lines. I usually wrap with 28 gauge wire about 5/8" inches and cover with heat-shrink. I'll find a tutorial if you need one, and it's not hard to do a neat job.
Rusty
_________________
Don't Panic!
...and never Ever think about how good you are at something...
while you're doing it!

I think I'd be making the first flight on one engine if the speed of the Norvels is anything to go on.  Man that thing moves!!!
Once one cut out it dropped to what I'd consider a managable speed.

Bob, if you're worried about geting dizzy (and I know you are) I'd suggest long lines and rich mixtures for a start.  Looks to me like two Black Widows would be more than enough power to make some fun.

Bob,
It sure looks great! I like the colors. Show us with spinners, please.

Once you fly:
What size tanks did you settle on? How long do Enya .09s run on your tanks? Have you got someone timing your laps so we can get a speed estimate?

Thanks,
Jim in MS

Good luck on the maiden flight!

LOOKS GREAT BOB!! I think you did a good job on the model man and what Rod said on the rich run , Mikes was moving on , Heck i would like to see the toutor video Rusty!

I watched Mikes video with those Norvels.  Cool Mike smoking a cigarette while doing wing-overs.

Not me, more like a death grip on the handle.  I won't even attempt to fly it before I destroy a few lesser models in a re-learning process.  My son will make the maiden.

I am concerned about a nacelle breaking off clean at the wings leading edge and "departing the aircraft".  Jim re-enforced his from the beginning, I didn't.  If it happens, I will just cut a new one from the plans and try again assuming there is enough left of the plane to do so.

Thanks Rusty, I will terminate the lead-outs with loops.  I didn't wire wrap mine, I just crimped a piece of tubing and bent the bitter end back over the crimp.  In the past, I have always flown everything greater than .049's on 52' lines.  All I had.  35's all the way down to .15's, never thought a thing about it.

I am not a creative or artsy person even after a life time of trying.

.  I robbed this picture off the net in an attempt to paint the Mossy in some sort of acceptable pattern unique to the aircraft failing miserably.

But I gave myself points for trying. 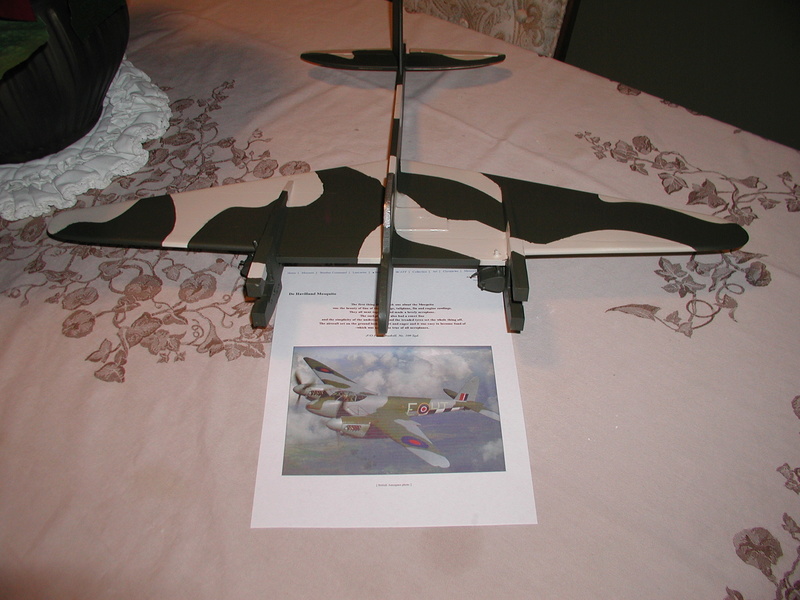 Mistake alert.  I sealed it with two coats of sanding sealer and primed with Lustrekote primer.  Then used Krylon satin Almond as the base followed by Krylon ultra-flat camouflage.  Not sure of the fuel resistant qualities of the Krylons I wanted to top coat it with crystal clear Lustrekote first testing it on a sample that worked ok.

But starting on the underside of the air-frame, engine mounts and fuel tanks I noticed some crinkling of the paint.  Not good.  It was crinkling on some spots but not on others.  So I stopped and determined that it was reacting to the adhesive left from the frog masking tape that I used when I pulled it off, a perfect match in those areas.  Good thing I didn't use it on the top of the wing as I used a lot of masking there. 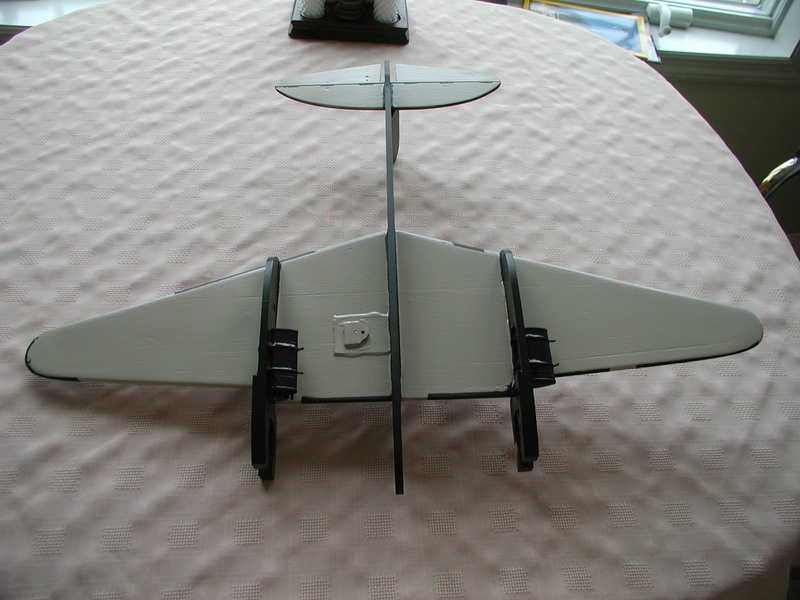 If I had my way I would have used Lustrekote exclusively, but they don't offer a camo paint scheme.  The best finish I have ever used was Hobby Poxy 2 part.

@rsv1cox wrote:Thanks guys......Thanks Rusty, I will terminate the lead-outs with loops.  I didn't wire wrap mine, I just crimped a piece of tubing and bent the bitter end back over the crimp....

Bob, if you don't have any thimbles, it's fine to use some short copper or brass(not aluminum) tube. Thread the line through it and bend it into a closed "C" and then copper wire-wrap like you would with the thimbles. That's about as safe as you can get. And easier to get equal lengths, which I always struggle not to botch.
Rusty

Decals and fuel lines on.  Controls set, I used Rusty's heat shrink method to secure the lines, unnecessary in this case but I think it looks cool.  I can't figure the roundels.  British for sure but what command.  Blue with a red center. I can only find one like it, a Mosquito based in Italy during WW2.  Decals from Black Hawk models are for a Spitfire. 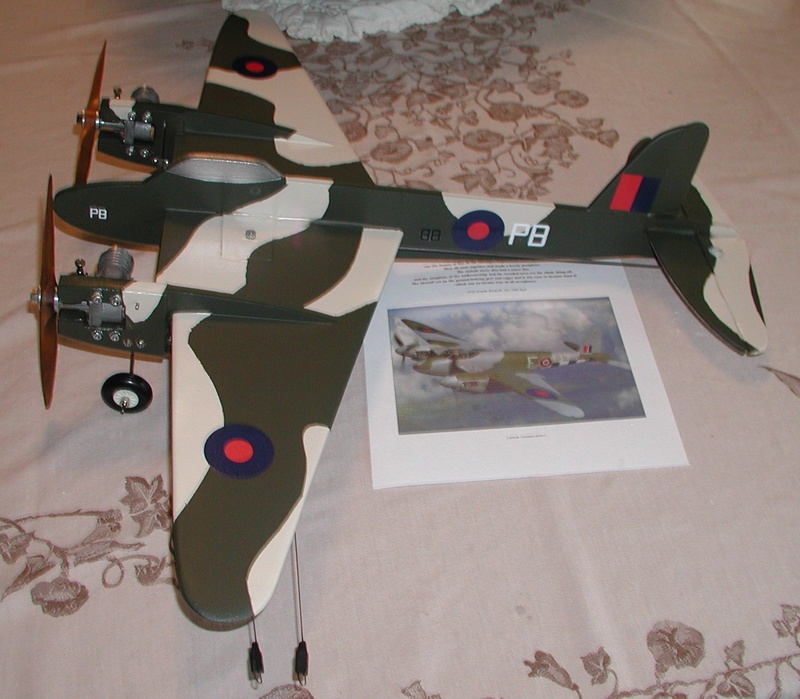 I couldn't resist using the decals sheet alignment mark as a gunsight. 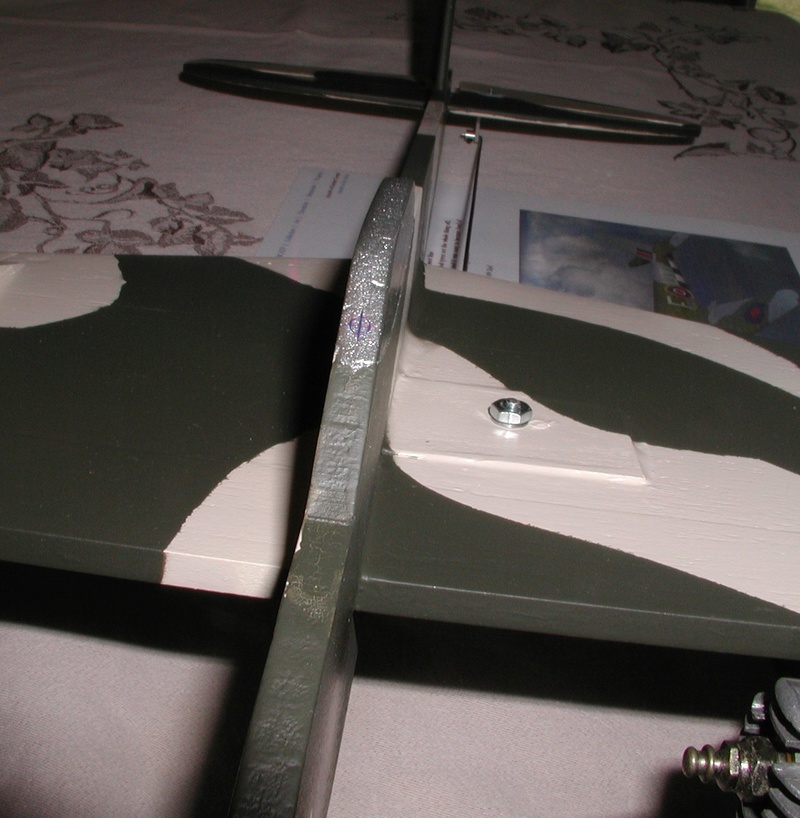 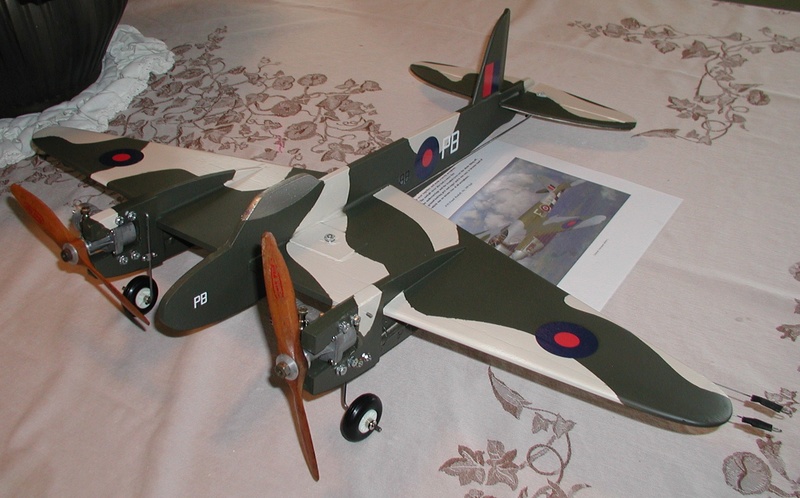 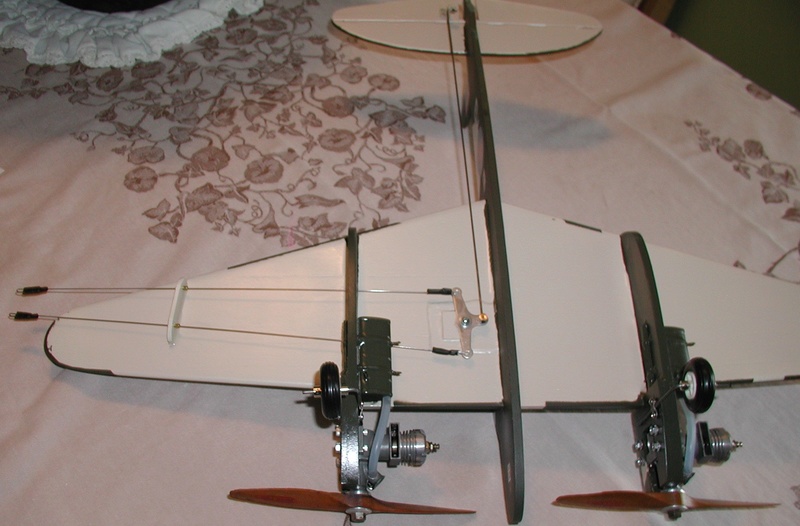 PS - Glad to be a part of that milestone Rusty. The "thimbles" that you refer to, are they the brass grommets that go on the ends of the lead-outs? I ran out of them, but can always add them later, I have plenty of that lead-out wire.

Bob, you're being too critical of your craftsmanship! I think it looks great and the camo paint scheme is proper. Looks even better with the decals. Nice job of keeping the sticker police at bay.  A+ for a 1/2a

Those roundels.  According to this web site were used as low visibility on night flying aircraft eg. fighter, bombers.

Interesting, the pictured Mosquito has both types of roundels, the outer yellow ringed for use on dark surfaces.  Also the tail insignia is different, not having the white line separating the colors.

Most of the Mosquito's of the era have an antenna just behind the cockpit.  I have to stick a black toothpick there.

Antenna and invasion stripes.  I'm in. 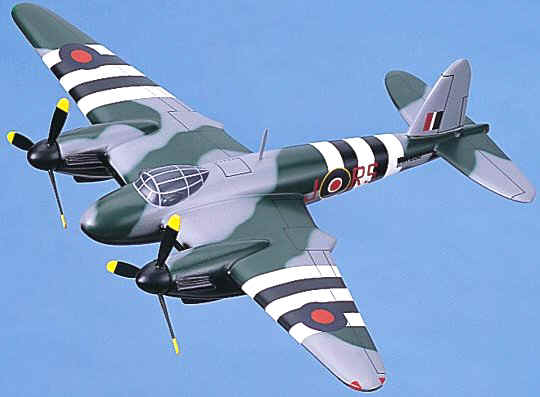 Yes, I think a couple of Black Widows would have powered this thing just fine.  I had ordered another Mosquito kit from BHM's but they must be asleep.  I put an order in a month ago asking for a price with shipping and never heard anything back even after a couple of prompts.  Finally I just put $49 in their paypal account.  It stayed there for a week with no takers so I cancelled it. I would like to build another learning from my mistakes and mount .049's on it just to see.

Spinners are coming on a slow boat from China. Both spun aluminum and plastic.

Bob, Your model looks terrific! We're the worst critics of our own work. When I first saw your camo-pattern, I thought it looked great. It looks even better now! Hope the maiden goes well. Seeing that your son has a lot of experience with "Mustangs".... I'm sure he'll be able to handle it!

Thanks akj, roddie and Rene.  At first I wanted to take akj's baseball bat to it but I just walked away,

but like a pimple, it's growing on me.  I did mess up that cockpits canopy royally though, got to fix that.

I am amazed that the cg is spot on though according to the plans. 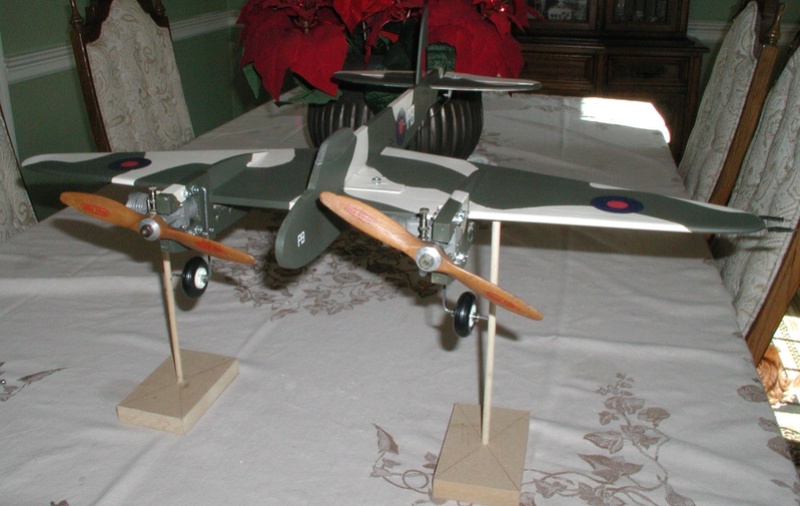 Stupid looking canopy.  Something is way out of whack, needs to extend deeper and forward. 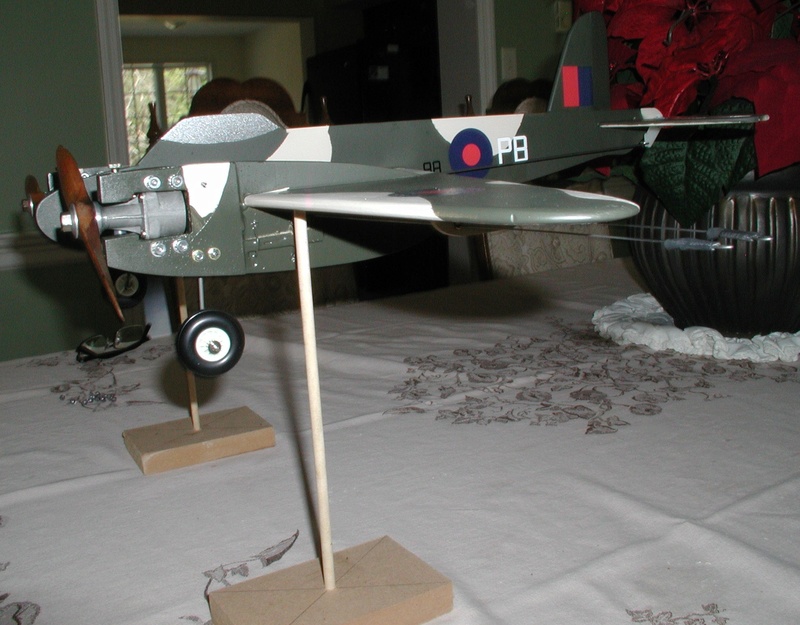 OK i will bite , you thing its that Bad! wait till it gets some creditor Hea it looks FINE other than that catalope

Love you man !! I am glad ya C of G came out riteish

When is the Son coming in ?

If BHM gets' off their butt and acknowledges you for a follow-up kit.. "trace" all the parts-outlines onto paper before assembly for future-builds! I should have mentioned that early-on. It's all "sheet-construction".. and very easy to duplicate. Jim or Mike may already have templates that they'd be willing to share. 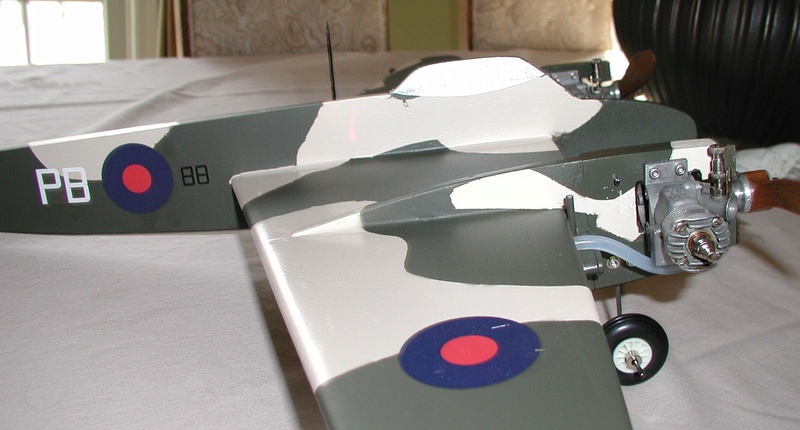 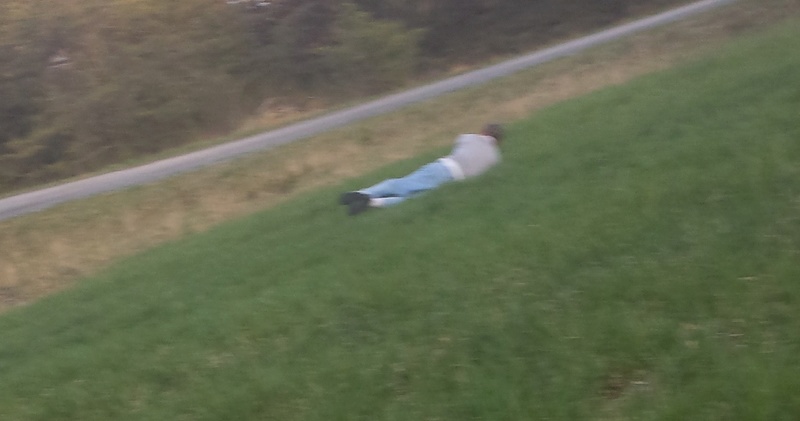 I haven't had tight-lines in my hand for more years than I care to remember! You and I are in similar situations. Hopefully we'll be able to share the experience this Spring.. and be able to laugh about it together!

You have the know how and the will , after the maiden == when you fly have your son to come out and help / if you needed some to take over .. Shoot i Quite not asking for it a while back * Then Enya's are going to sound GOOD!!

Yeah, wishing you success with this project! There just aren't enough mosquito's in the world! Like Eric said, those Enya's are gonna sounds great !

If BHM fails to sell you a kit, well, bad on them.
PM me your email address, I have something that may help the BHM lack-of-followup easier to handle.

It is a shame really...All the little parts will drive the cost of scratch-building a second over the price of a second kit.

Y'all know Black Hawk was sold and is under new ownership? Here is their post from Stunt Hangar--- We, at Black Hawk Models, would like to thank you for being such loyal customers, and friends over the years... We appreciate your business and would like to thank you for your history.
As some of you may alreary know, I have decided to retire, and in doing so I would like to let you know that the same team that has worked directly with me, will still be serving you.
Black Hawk Models is resuming production and will be offerring a complete line of kits.
Please contact Dezi Gebel with all request and/or questions at (519) 403-5310