Congrats on the Norvel engine purchases guys! I'm not an "Ebayer".. but I'm thinking I should be now. The TV version of that engine would be perfect for a Herr ARF kit that I bought many years ago. It's still NIB.. 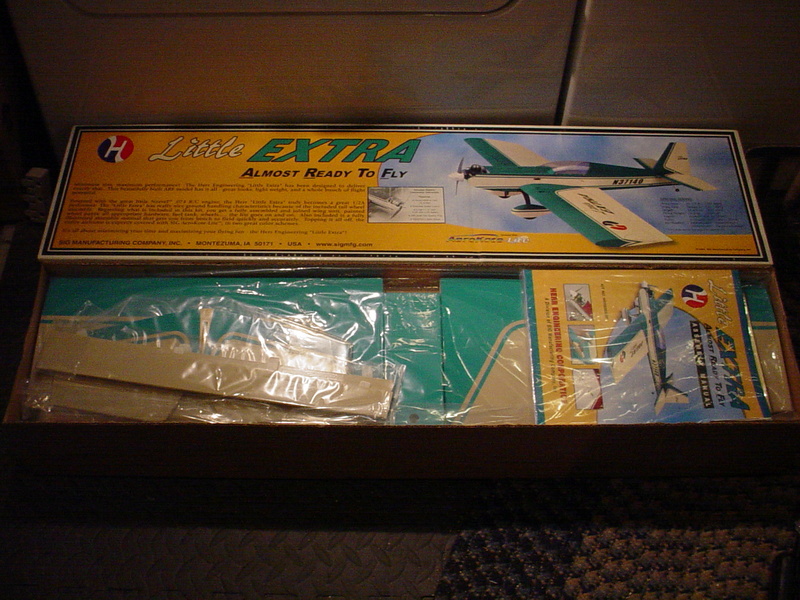 I believe that the Norvel .074 is the recommended engine. I'd need several hours on an RC trainer.. before I could even think about flying the Lil' Extra. It was one of those "some day" purchases.. same as my Ace "All-Star" bipe. I did buy an OS .10 FP RC for the Ace kit though. All are still NIB stuff.. for someday..

If I "buy the farm" before someday.. one of you guys will surely end up with my stuff. My wife has instructions.

Roddie the Heli version can be bought for $20.00 on a make offer bid. however they came without glow plugs. you can buy after market plug adapters to use standard plugs. I had a herr lil extra with a norvel .074 in it. It was quite a handfull.It met its expiration date lol. it was fun while It lasted though. I highly recommend the .074

1/2A Nut wrote:No over cooling will reduce power, you need enough heat in the combustion chamber
to burn all the fuel possible per cycle otherwise your wasting fuel and thus potential power.

Now with that being said if you only use methanol it burns hotter than nitro which would
allow some extra fins.

3 to 4 fins is enough for aero use. I use 5 fins as it was ultimately going into a boat project.
The bronze bushing for the crank makes it very suitable.

Thanks for the Help

My engines came today also.  I wish that I had known the guy would take $20 for the heli engines, but I’m still happy to get them for $28.  I’ll have to order three .074 Norvell plugs from MECOA for the heli engines.  It’s strange that the NV Engines website doesn’t sell .074 glow heads. 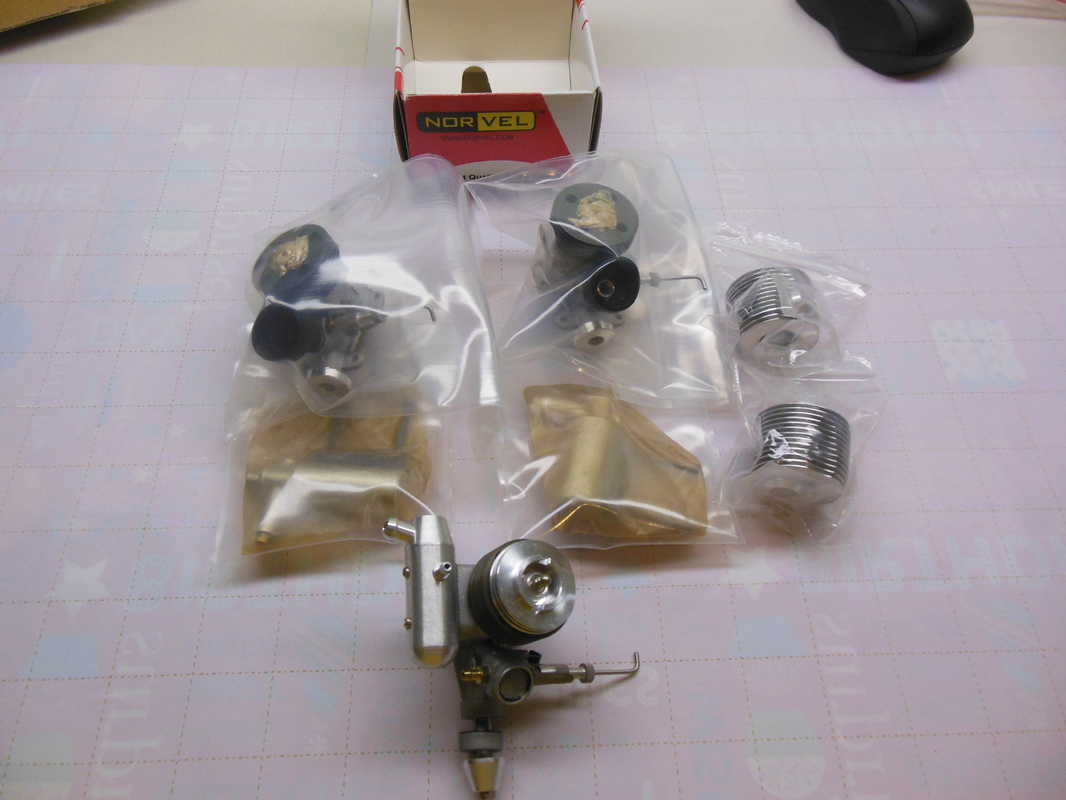 The venturi on the heli engines seems awfully small.  I measured it and it was right at 3mm.  Gonna be interesting to see many RPMs I can turn on these engines.   I was wondering if I could put the heli venturi on the R/C engine, but they’re totally different. 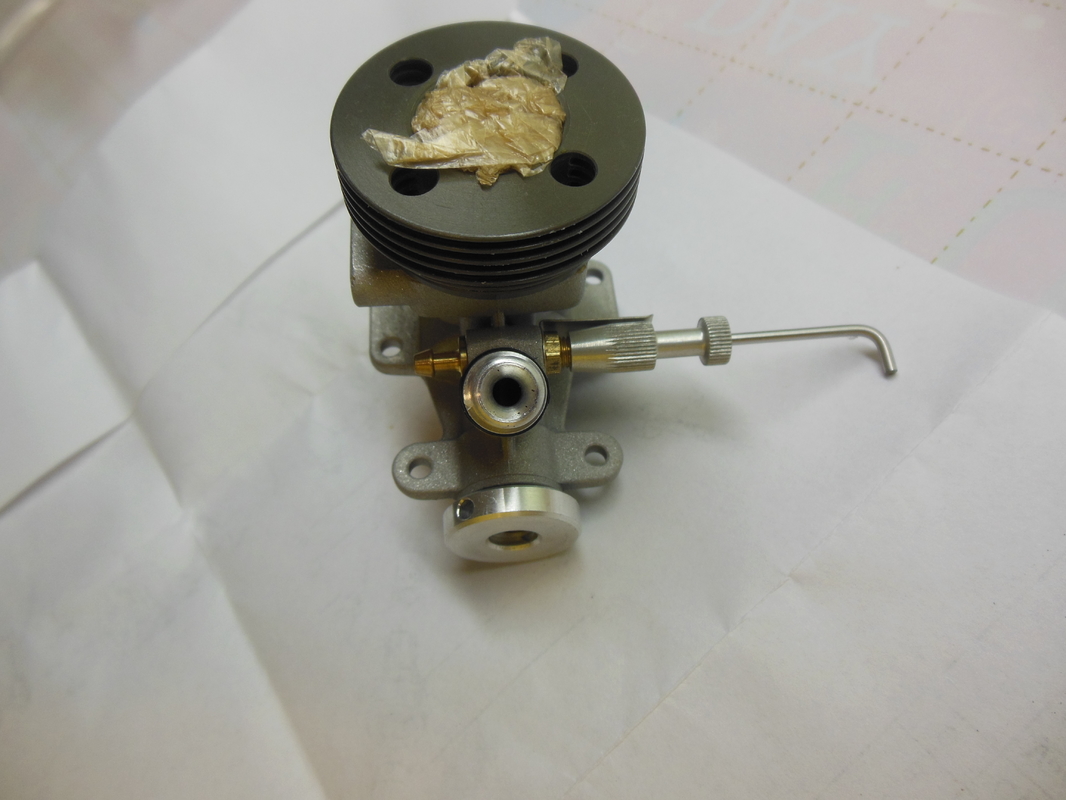 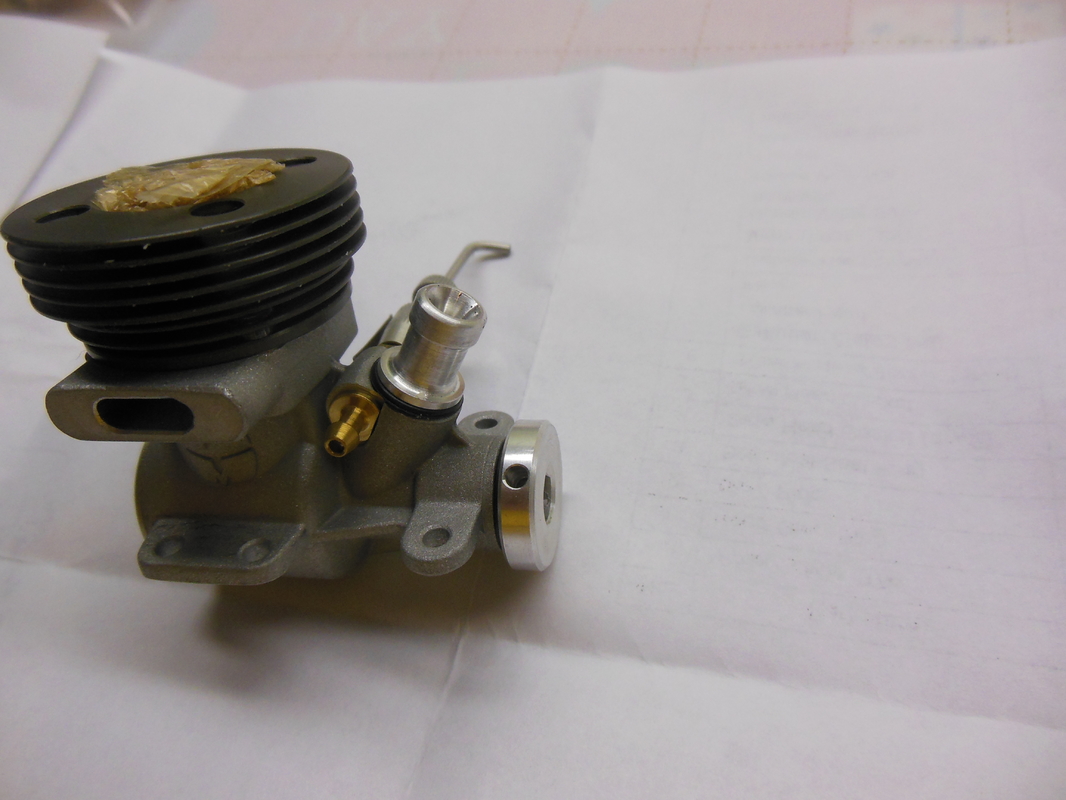 I’m going to try the R/C prop hub on the heli engines to see if they fit, and if so I might order a couple from the NV Engines website.  That’ll get the prop a little farther away from the needle valve needle.  They want $3 for a prop screw, and $5 for a spinner, so I’ll just use a screw and a washer .

I opened one of the muffler packages for the heli engine to answer my own question.  You can slide the throttle bar from the side and through the back, but you’d have to do couple of minutes with a round file. 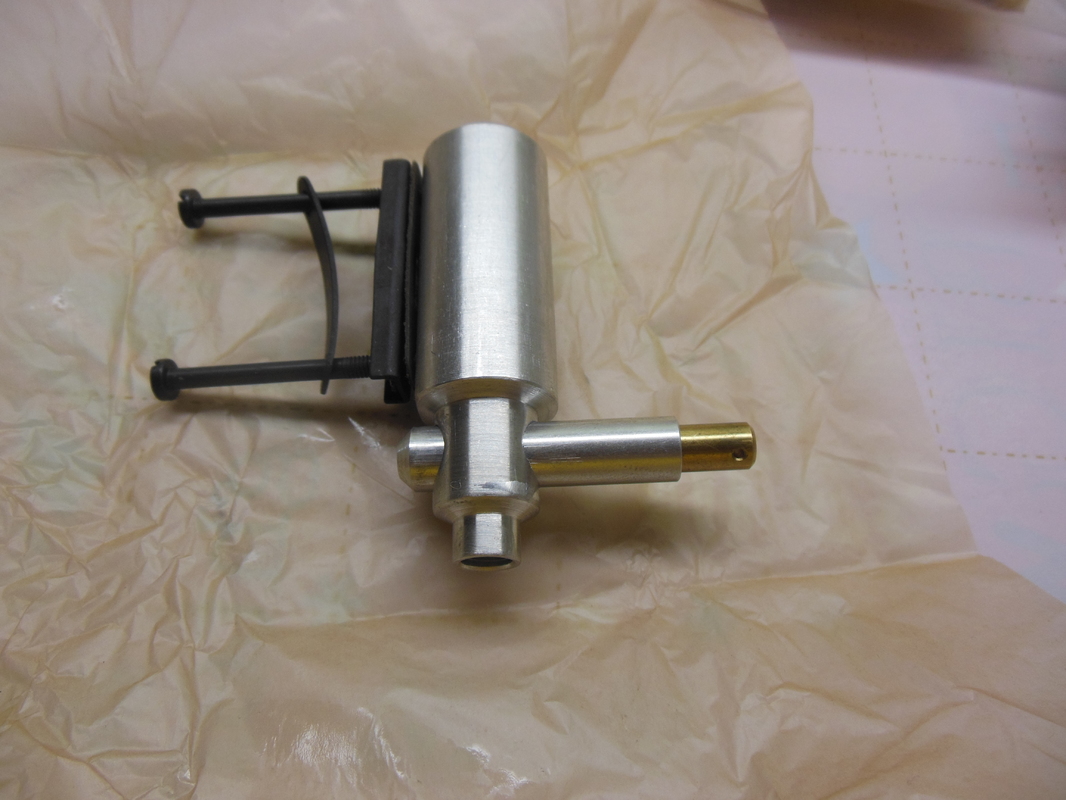 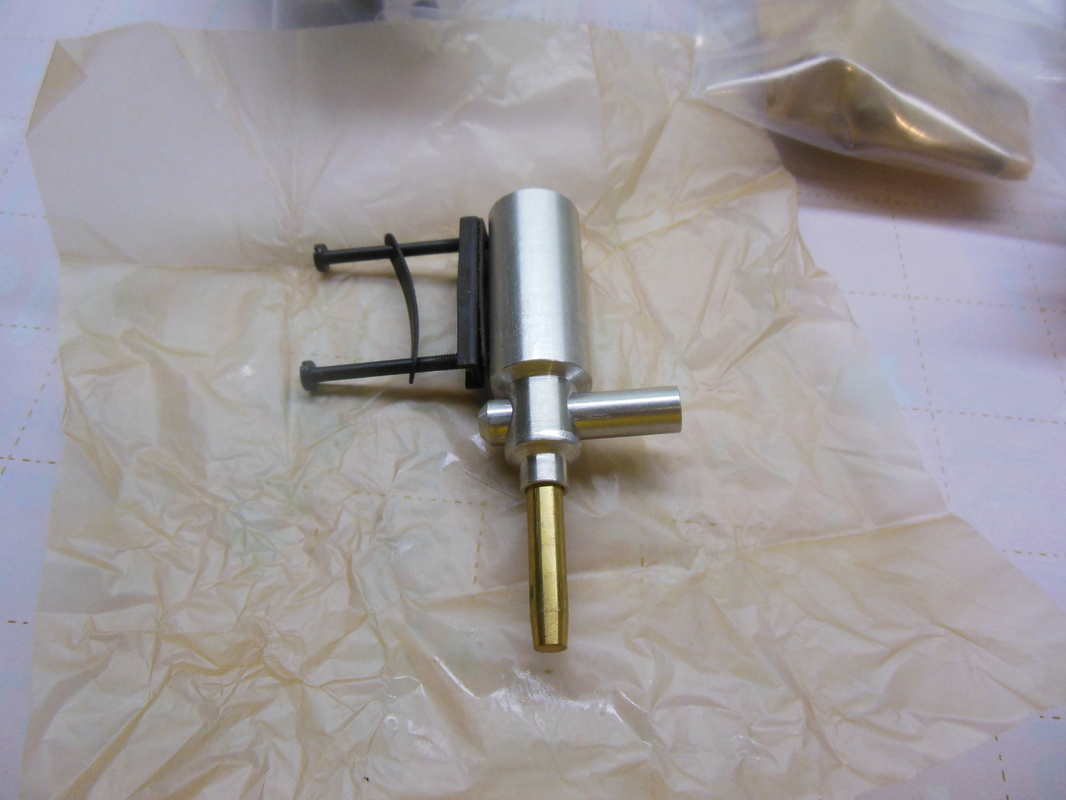 Last interesting thing.  The heli engines come with an Operating Instructions sheet.  But, if you open up the sheet, no instructions…  The QC Inspection Date on the sheets is 11/04/02. Definitely N.O.S. 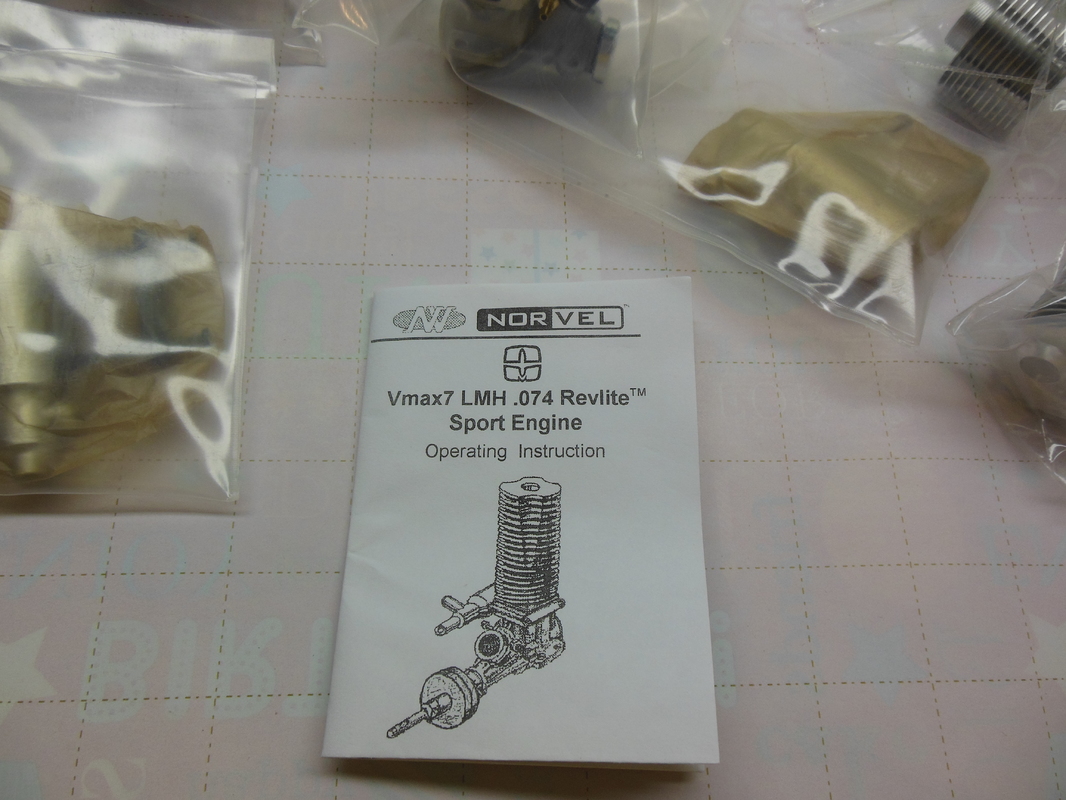 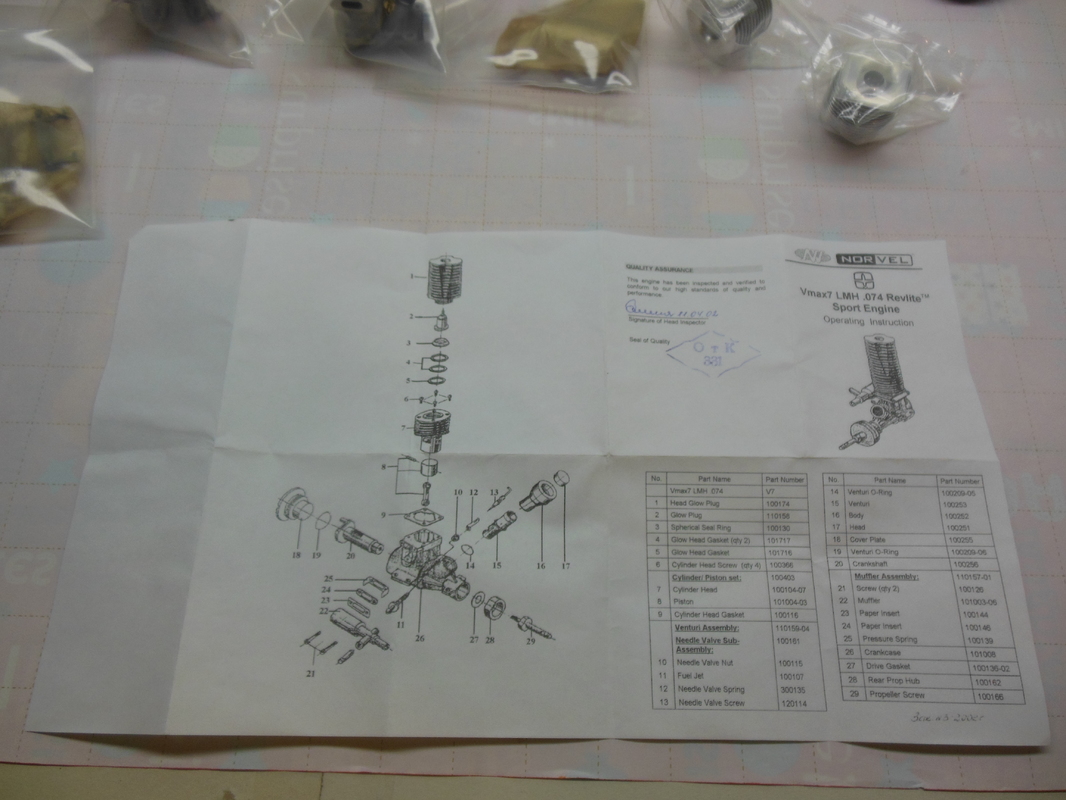 Mark, when NV returned on the scene they were not quite yet producing engines and parts. Most of the inventory was old stock which nonetheless was good because there just was no parts support period. NV however did start producing small runs of engines and the cases had the NV logo cast onto them. Since the NV site has been up and going, parts supply is limited and many of the needed items are out of stock. I inquired about a few items only to receive a response that stated that the small engines are not the bread and butter of the company. We will continue to sell off old inventory until depleted with a possibility of manufacturing parts if that decision arrives. Gasoline engines are what's on the front line and we shifted our gears to focus on this new technology beginning with .40 size engines. This might clarify as to why parts are not available. A fellow named Alex is responsible for sales and his contact info is klondike17@juno.com. Hopefully this is still valid and many times he's provided me with parts that were not even listed on the site. Ken

Ken, thanks for the update on Norvel parts status. Looks like they are having similar problems that Fox encountered, prior to them giving up the historic model engine business forever a few years ago. Issue was profitability, as demand for their engines dropped off significantly. I gather that electric motors and lightweight batteries for power have caused the decrease in interest for small glow engines in park fliers, as well as cheaper glow engines from China.

(I used to buy the 22.5 Volt photo flash batteries from a local drug store in the very early 1970's. They looked exactly like modern 9 Volt batteries, even with same battery connector, except case was about 1/4" [5 mm] longer. Individual flash bulbs were still available and I had a portable flash unit with leafed reflector. One could fan it out to provide a reflector dish to bounce the light forward. I used it with my 2-1/4" negative twin lens reflex camera. After taking a flash photo, the light was so intense that it left a flash impression in one's eyes that lasted a couple minutes, unlike today's flashes.

Kodak's disposable flash cube (4 sided for 4 flashes) was revolutionary then.

I'm thinking of powering it electrically instead of glow, since it has a cavernous fuselage designed to handle the size and weight of batteries and RC gear. 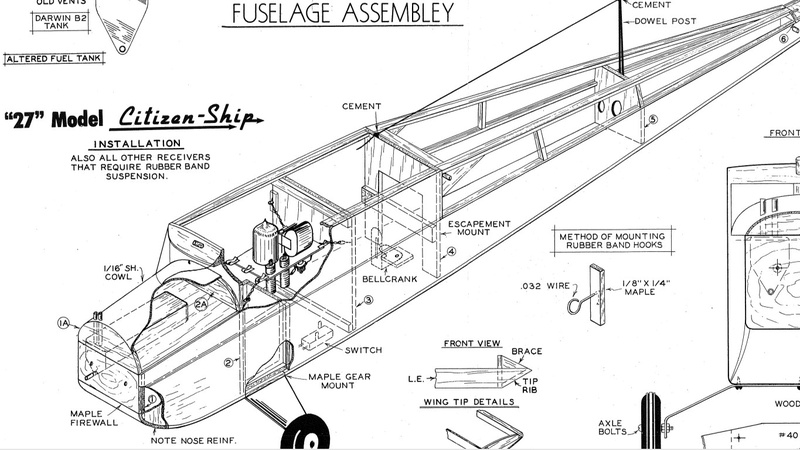 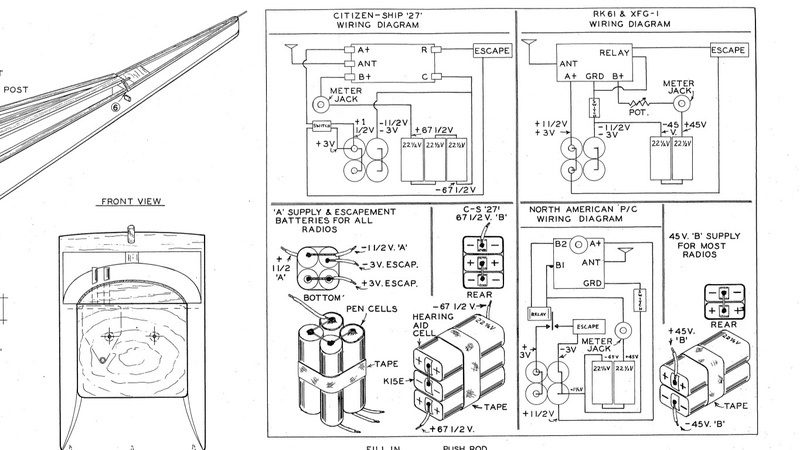 1- I should have read Kens 1st post a little closer...special glow plug required.....OOPs!
2-did some searching and MECOA does offer a drop in plug that NV no longer sells.
3-I requested the "trump friends and family discount" on the parts I did order......I wonder if they'll just pee on the box before shipping and video it.
4- I wonder if I'm now on a "watch list" for dealing with the Russians??

For some IMpORTaNT instructions on how to break in your new Norvell 074 go to their web page NVengines.com and click on ,SUPPORT, in the upper RH corner
http://www.nvengines.com/index.php?option=com_content&view=category&layout=blog&id=45&Itemid=18

You gotta break in the engine, like I've never done before..injection of oil Into crankcase and spin with a drill. Of course these are NOT like our favorite cox engines.

Marley Sky...please do NEVER break in a tight pinch ABC engine that WAY...as well as NEVER try to turn the engine through a complete rev slowly by hand before break in... Oiled, and with prop, fast flips are OK

Best way is low compression head and heat the head with a gun for first ever start.. then immediately get it into fast two stroke to build heat in the head but shy of full tilt lean...

I have about 16 NVs right now and my first was After Rusty played with his... every one of mine was initially started with a very hot head the first time and after that first 3 min run they all start easy

These are nice to have: 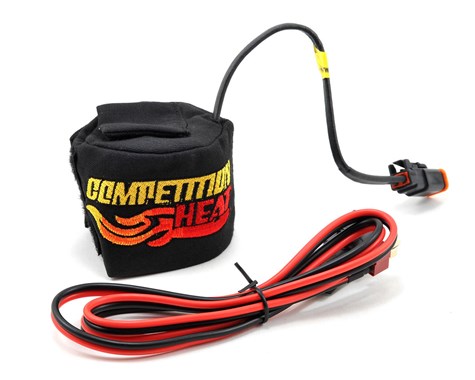 BUT....if it is that damned cold out that a Lipo head heater is needed....I am screwing around in my shop waiting for the sun to rise.. and OAT to be well above 50F...seriously!!!!

However lacking the purchase of that neat head heater...most of us have access to a hair dryer, butane torch, covering gun, commercial heat gun, or in a pinch...douse the head in fuel and light off the sucker....grin....hell ....in fact a Bic lighter probably would work

Marleysky wrote:4- I wonder if I'm now on a "watch list" for dealing with the Russians??

What am I to do with my Russian Norvels, AME's and MDS?

All of a sudden I have an urgent desire to build Russian models, both scale and sport!

Marleysky wrote:4- I wonder if I'm now on a "watch list" for dealing with the Russians??

What am I to do with my Russian Norvels, AME's and MDS?

All of a sudden I have an urgent desire to build Russian models, both scale and sport!

The Off on a Tangent Mark

At the flying field this is a plus and must have for new tech car engines regardless if fully broken in.
There is no 120v outlet in the field. The engine still needs to be handled with care when firing up
for a run if temps are in the low 70's. Competition drivers strive for every last drop of power to keep
their rankings. That and for the price of some of the new engines in order to get your 400 -600 dollars
worth you want all the longevity you can get.

An example is my Novarossi Rex .12 weight is 211g with just prop and of course the power is extreme.
Very very tight piston sleeve interface at TDC must be preheated in the field for longevity and to
reduce stress on start up. You will degrade the fit if flipped cold as a practice. Heat of the summer
in 85F + no problem just let it sit in the sun for 30 mins. if time is no object. 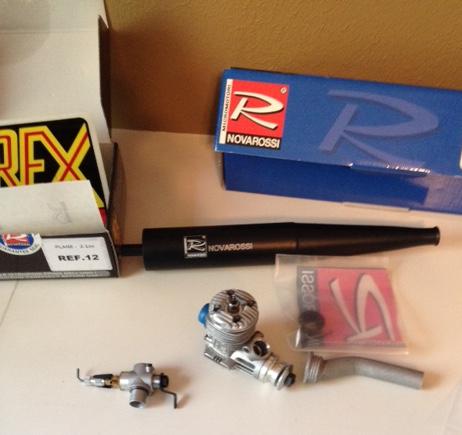 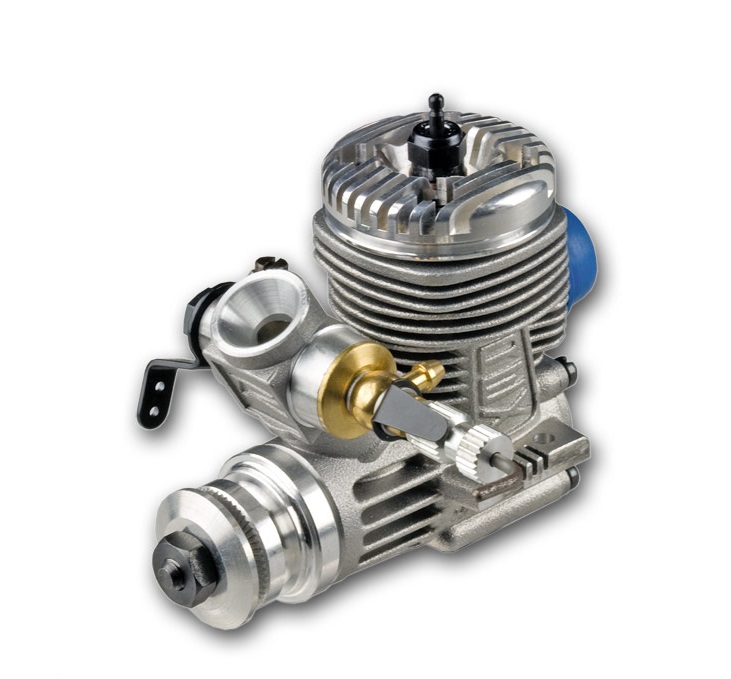 I love the Novarossi engines. Many of the New Jersey racing guys have been using the .12's for clown racing and they certainly haul the mail.

Marley Sky...please do NEVER break in a tight pinch ABC engine that WAY...as well as NEVER try to turn the engine through a complete rev slowly by hand before break in... Oiled, and with prop, fast flips are OK

Best way is low compression head and heat the head with a gun for first ever start.. then immediately get it into fast two stroke to build heat in the head but shy of full tilt lean...

I have about 16 NVs right now and my first was After Rusty played with his... every one of mine was initially started with a very hot head the first time and after that first 3 min run they all start easy

THANKS Fred! I know the little voice in my head said, "Don't turn this engine over by hand if it is that tight ( pinch @tdc) My frontal lobe wanted to believe the Mfgrs recommended methods, after all they made the little thing! But, was waiting for someone with some experience with these to chime in and provide that tried and true methods of breaking in these little monsters. Appreciate your engine saving input!!

$18.78 here if you need one without breaking the bank... slow boat from China.

I bought 2 while they were still $50 for a twin project. Great deal, Thanks to the OP for letting us know.

What twin engine airplane are you putting them on ?....

A Sterling P-38 that is almost finished. It calls for .09 to .15's. A pair of .15's would certainly be too heavy, my plan was to use the Cox .09's I had in my stash but they were old and not very good runners so I kind of shelved the project until I could get my hands on some new NV .074's. I almost bought a pair last year but the $100 price tag each made me wait. I'm glad I did. The NV's will certainly pull it and without the weight of two .15's.