I tend to collect anything related to Remington and when I found this mint NIP model I had no trouble handing over five bucks.  The first one of these that I had ever seen.  Goes well with my other Remington/UMC collectables. 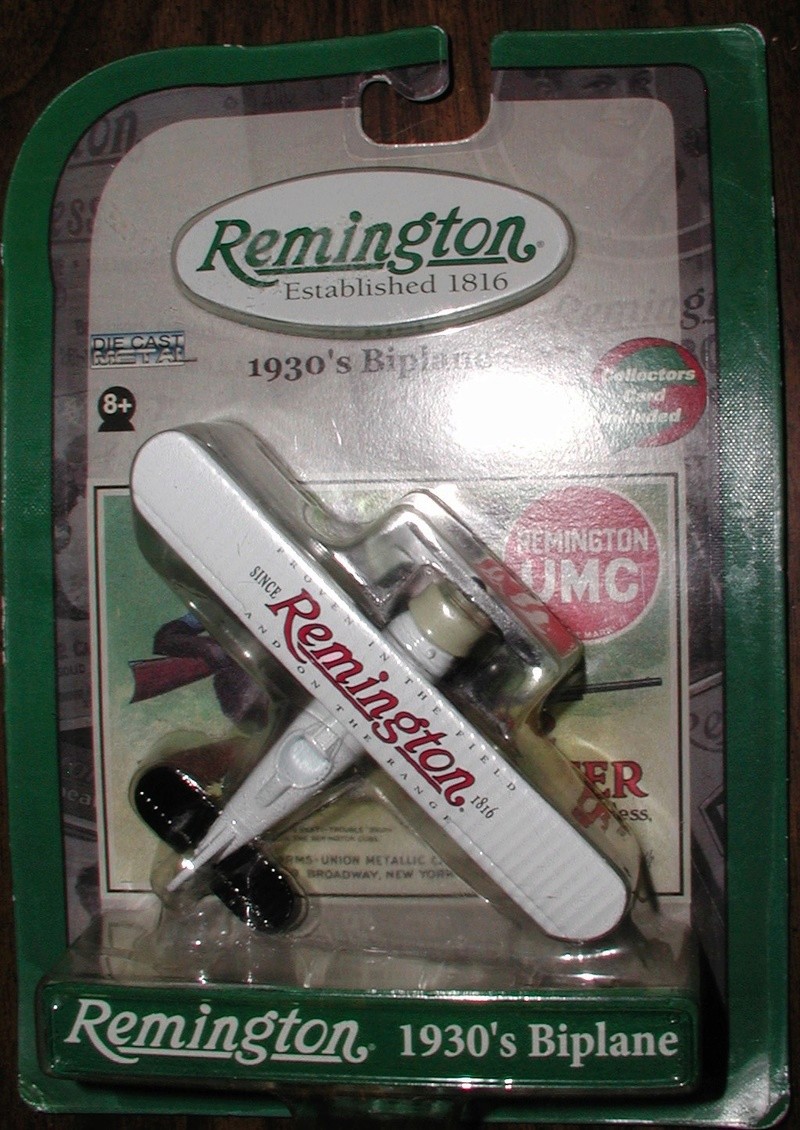 There are others in different paint schemes on ebay at similiar prices, I may just have to add to my collection.

I don't care if the guy liked the shaver so much "he bought the company"  or not. I've not used one ( as shown on the right in this picture) since the early 70's.  Dave letterman is my new hero for going out with his full beard for all to enjoy! And his quote: "If you retire to spend more time with your family, you better check with your family first". 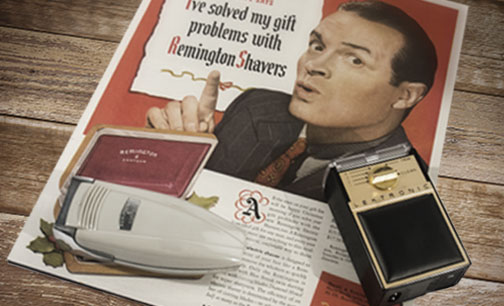 Yeah, I know your obsession is with the Guns and Ammo Remington, not the shaver people, but when I first read your post, I got a good chuckle out of my thought " boy, Bobs really into a good clean shave!"

Some savvy store owners / promoters, gave away a lot of the stuff for simple brand name recognition

Then some noticed that people would actually pay for the stuff

WE had to vote to include it on our named peril insurance policy becaus some member found out it was worth about $15,000 today...

I remember back in the 60s, as my dad was checking out of a place like Western Auto with the quarterly car service air-filter, oil and stuff ----he would ask the counter guy to throw in some of the promotional crap ...decals from STP, pens, and the such

Later when I briefly worked at a full service station...gas pump -window washer -oil checker we had all sorts of that stuff as well as S&H green stamps.... I gave away a free Dino the Dinosaur to every car with kids in it

So gang where did I work?

Sinclair....    I worked for Marathon, at a intersection that had a Marathon, Shell, Sunoco and Sinclair on each corner w/ Texaco just down the street.
Full service, commission on oil changes, prizes in the oil cans, all the STP stickers you wanted. I worked evenings and weekends, had to clean and put away all the tools and wash down the service bays, using laundry soap and a stiff broom. When we needed more soap I'dtake a few bucks out of the till, run down street to the grocery store and by a large box of Tide ( iirc) which had a free towel inside. Put the change and store receipt back in the till, so the boss knew where the money went. Had quite a collection of towels. Ahh, memories!

They made a "Lady Remington" too Rene.

Remington "America's Oldest Gun-maker" branched out into making so many products it would be impossible to list them all here within the confines of time and good judgement.

The origins of the "Remington" name date back to the formation of E. Remington and Sons, a firearms maker founded in 1816. E. Remington & Sons made occasional forays into products other than firearms, such as sewing machines and farm implements — but its most significant side venture was when inventor Christopher Sholes persuaded the firearms company to help him develop the typewriter with the QWERTY keyboard, which is still the standard today.

Soooo....You can thank or scorn Remington today for what it just below your fingertips right now.

I am a long time member of The Remington Collector's Society and they put out a quarterly journal with some of the best color photography I have ever seen.  It's too bad my photographic skills don't represent it properly. 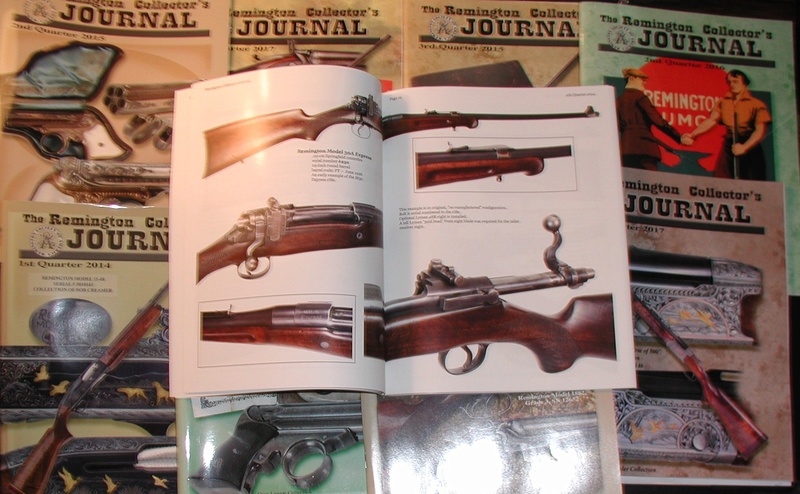 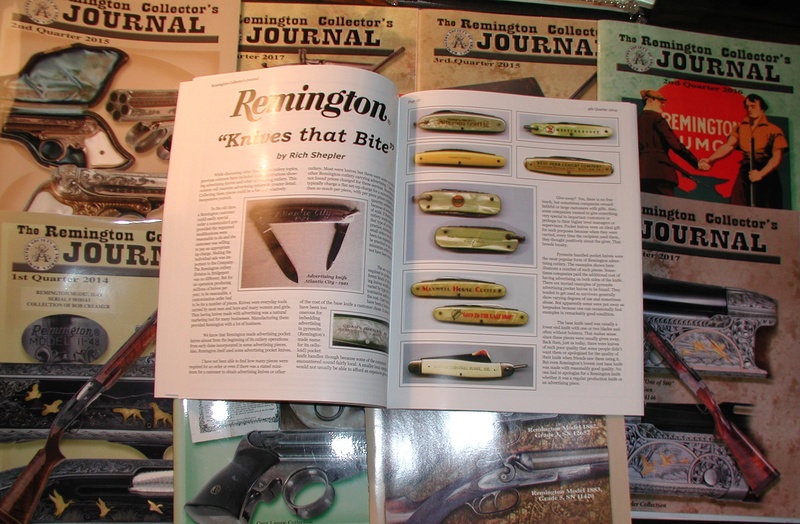 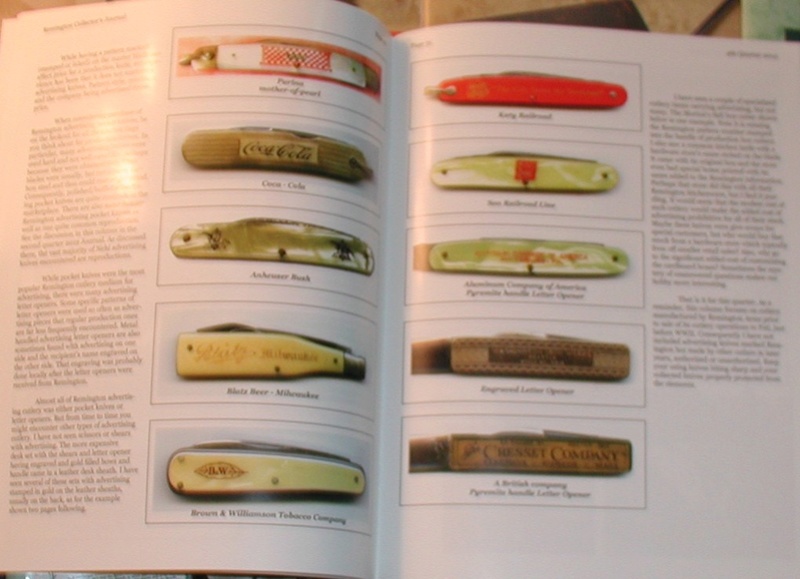 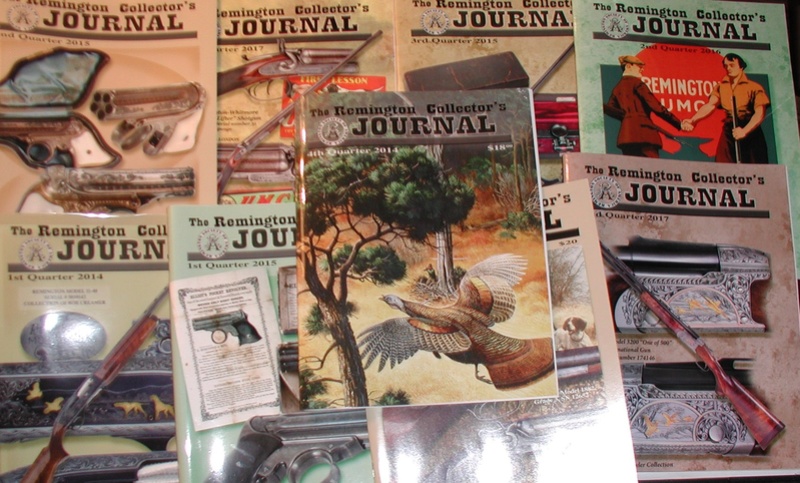 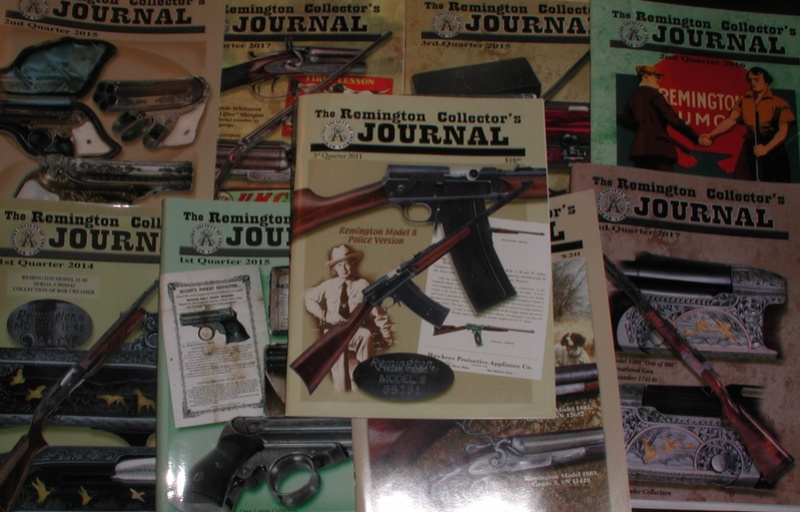 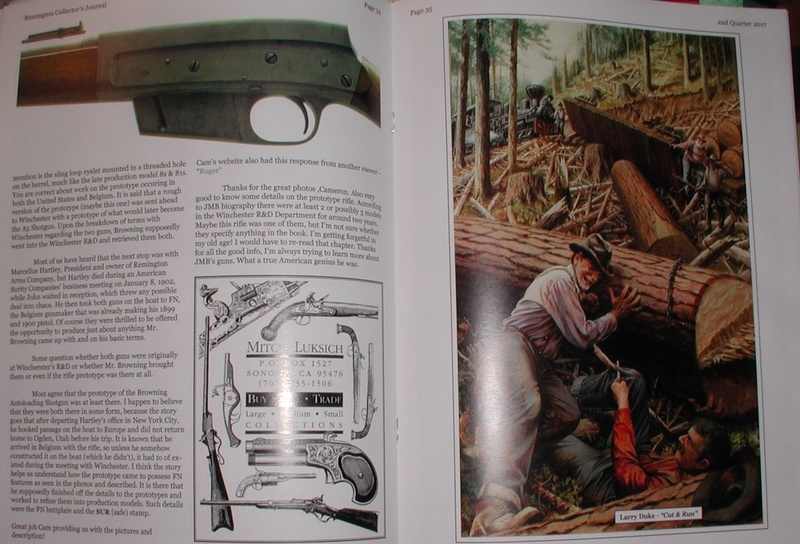 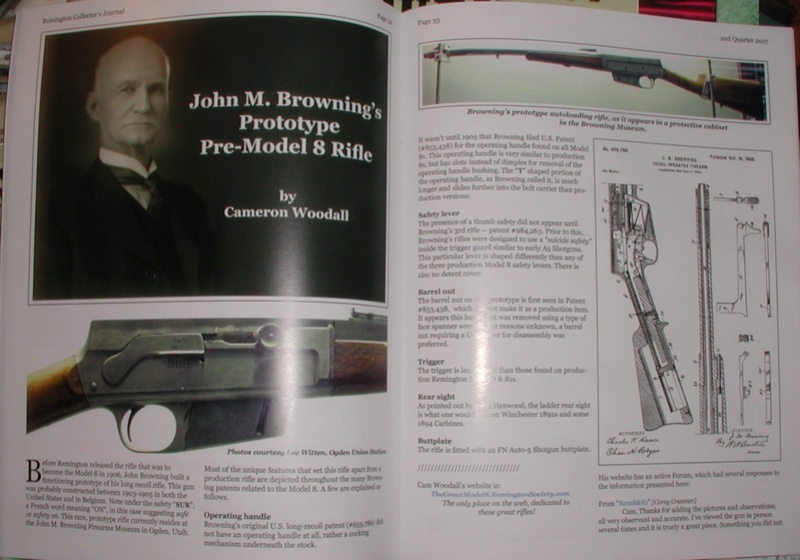 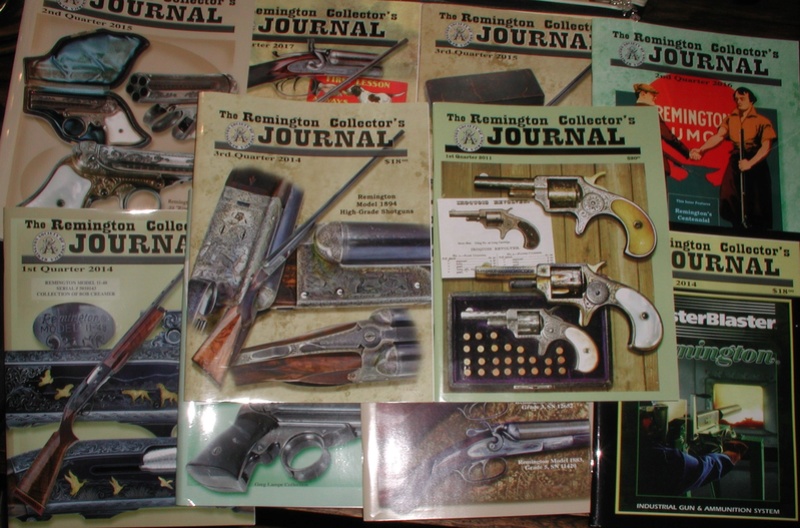 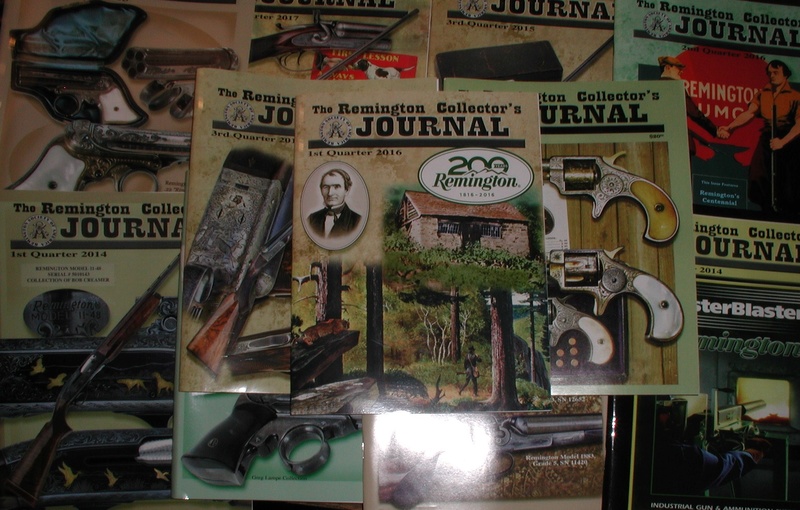 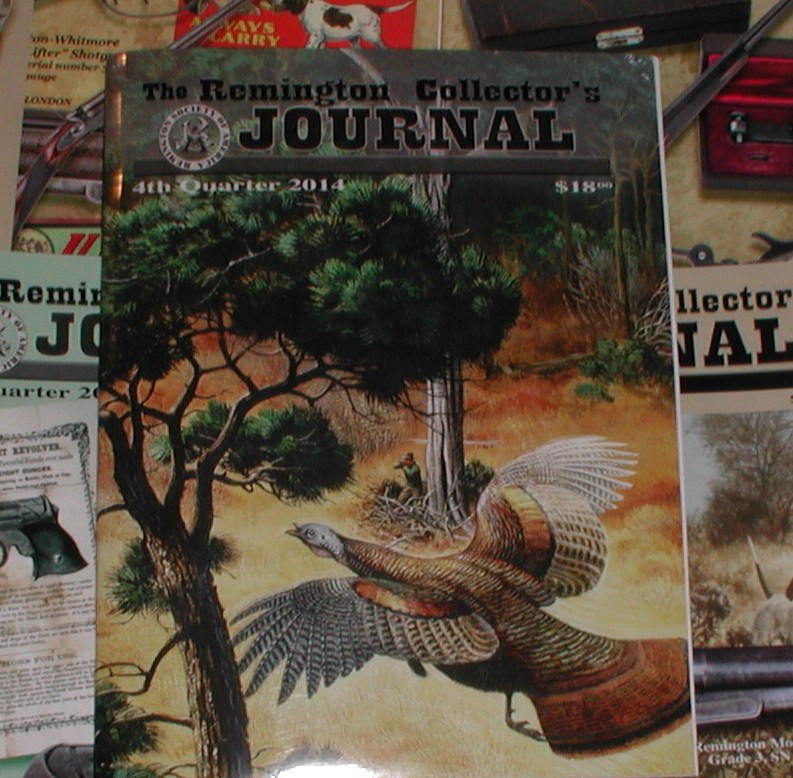 I am really sorry for the crappy pictures, they don't do the publication justice.

fredvon4 wrote:My Dad was a Texeco patron just because he though TCP (tom cat pee) was a funny additive

Nothing to do with Remington, but my first job was at a service station. Fred, I understand your ethical dilemma.

This was the time when plastic disposible driveway oil bottles were first used as a repacement for the refillable glass ones. At the end of the day my boss used to make me rummage through the rubbish bins and collect all the empty plastic bottles & my job was to refill them with cheap recycled oil, not the BP Visco 2000 advertised on the label. Cleaned them up really well and put them back on the rack for resale. I knew it was wrong, but a 16 year old in their first job didn't ask too many questions. 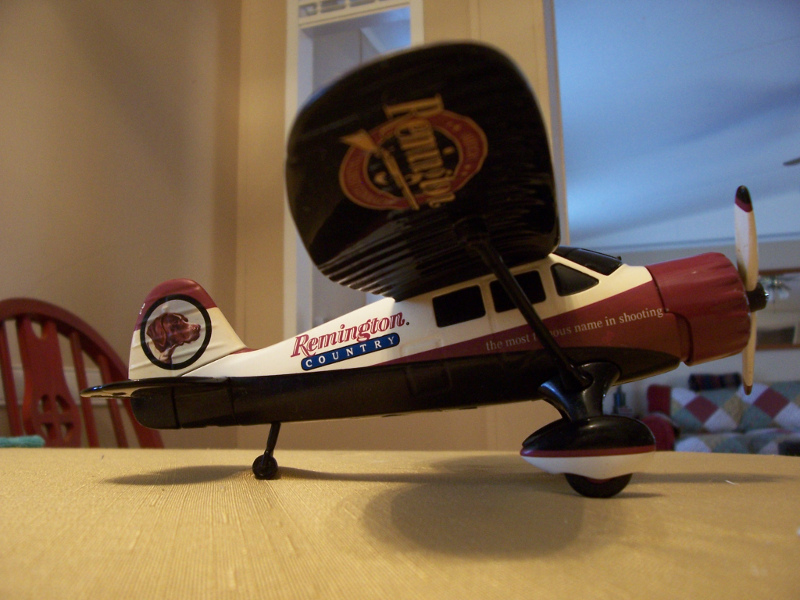 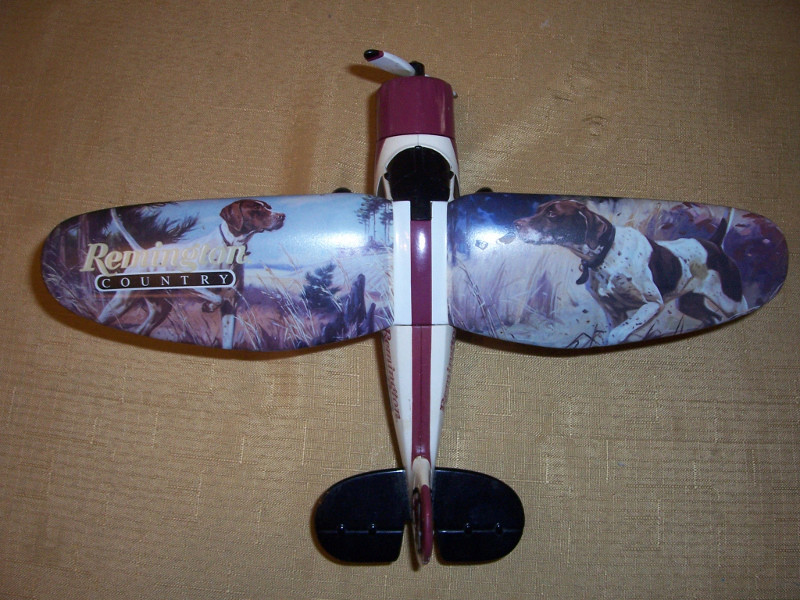 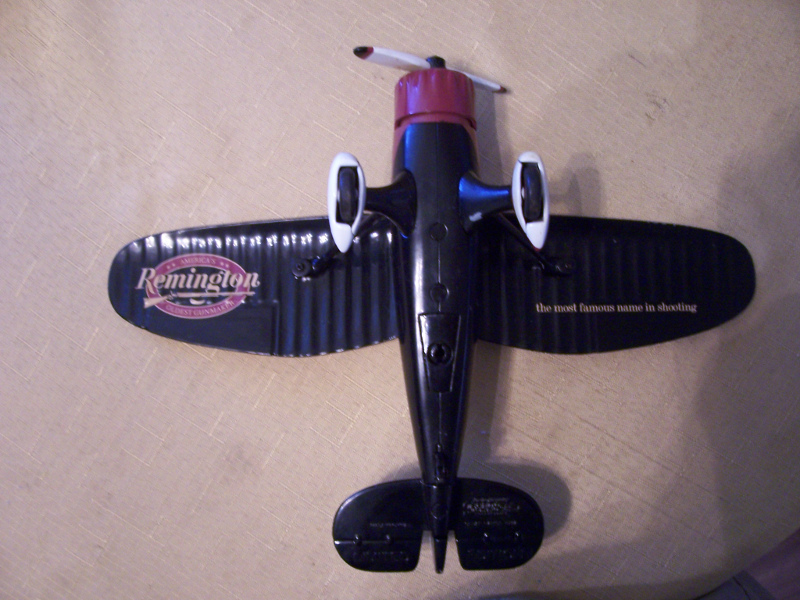 A couple of those Journals featured Remington's model 8 (1906/1911), my favorite center-fire rifle.  In 2006 Remington brought out a 100 year commemorative Model Four that features an image of the model 8 in gold on it's receiver.  A John Browning design it was also manufactured by FN for sale in Europe.

Learn about the unique model 8 and the Bonnie and Clyde connection in this youtube less than 4 minute video.

One to the head?
. All those bullets, as shown in the movie, and all it took is one to take down Clyde? Aww, where's the cinema in that?? Thanks for the history lesson. I could have spent the better part of the morning watching the "related" videos that pop up at the end of this one. One cup of coffee, and time to change the channel.

Marleysky wrote:
One to the head?
. All those bullets, as shown in the movie, and all it took is one to take down Clyde? Aww, where's the cinema in that??  Thanks for the history lesson. I could have spent the better part of the morning watching the "related" videos that pop up at the end of this one. One cup of coffee, and time to change the channel.

Yes, I think the narrator got a little carried away, if you have ever seen a picture of the actual car it looks like a sieve. The event was profiled recently in "The American Rifleman". There were several law enforcement officers involved in the ambush with a variety of long guns, machine guns, and pistols. And naturally the picture "Bonnie and Clyde" depicted it quite dramatically.

Terry was gracious enough to share that pictured Stinson with me. It's now a proud part of my Remington collection.

A seriously well rendered model that is heavy enough to gain a zero lift to glide ratio. 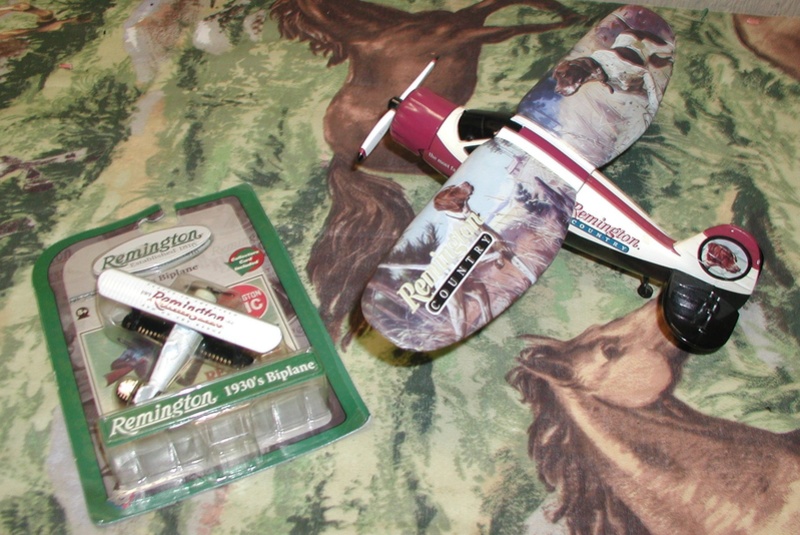 Thanks Terry, it arrived well packed and safe.

Glad to hear it, Bob.
Just part of my "pay it forward" debt to the hobby.
Lift the windscreen and you see it's also a coin bank, for even less glide ratio.

almost all the companies did a super job on the finish

BOB , Glad Terry shared with you the Stinson...a fav of mine

As I related in a thread not to long ago my wife and I discovered a Stinson Voyager for sale at a remote airfield not to far away from Pensacola.  We actually sat in it and dreamed for awhile. $750 was at the time out of the question.  It occurred to me that Terry helped my Stinson dream come true albeit at a slightly smaller scale.  The Reliant was the big brother to the Voyager and I believe was made during the same time period. 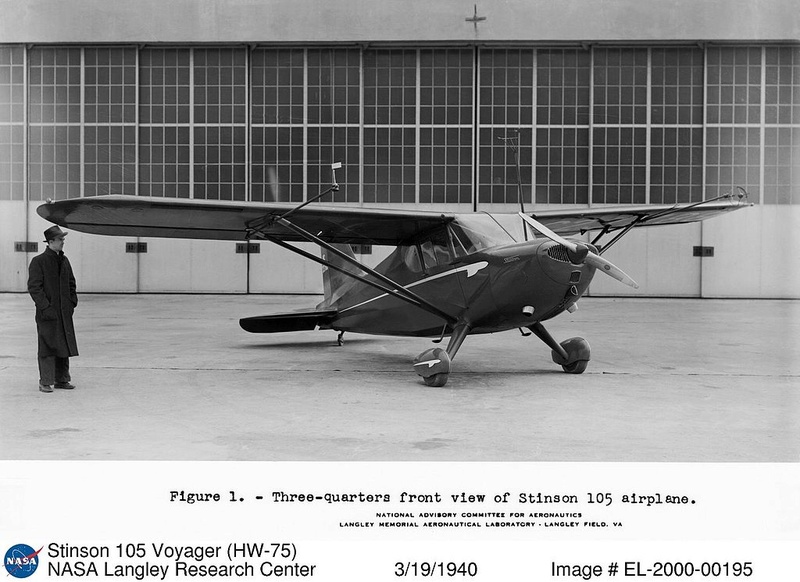 Hmm, did not know it was a coin bank too.  Maybe I will save up the $750 in there and get the full scale.

Edit add"  And this is slightly weird, I just remembered that we also looked at a Jaguar XK140M at Jarrard motors also in Pensacola and at the same price. $750.  We had good taste, small budget.  I remember we took it for a test ride and it had no brakes. Zero.  Using the hand brake I coxed it back to the dealer who apologized and said come back tomorrow and it will be fixed.  We did, and it was.  Drove it and fell in love with sports cars. 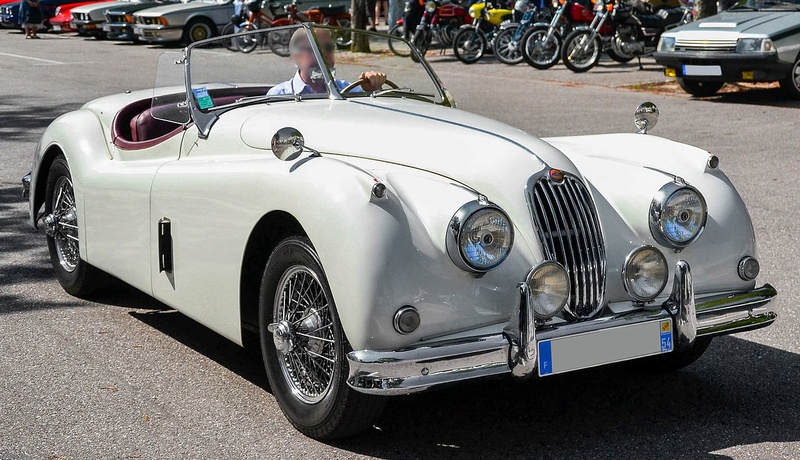