My Son is a Modeller!

My Son is a Modeller!

My 22 year old son and I went out to fly this morning.  I had converted his 1/2A SIG Skyray to electric at his request.  He put three flights on it, to see how the conversion worked.  It worked well.  With these three flights, that makes maybe eight or nine flights he’s done in the four years he's been with me.  I didn’t get him living with me ‘till he was 18, so he was not raised with models.  He was raised sheltered with video games and no contact soccer.  I’ve tried to get him to go outside and do things, but he never really has an interest.  So I was counting it a victory that he was coming out flying.

Well, after his three flights on his electric Skyray, I had him launch for me as I was test flying the Beginners Ringmaster I just built for the Fly-A-Thon.  According to him, this is what happened.  As he released, a freak thing occurred.  We were using my portable runway I use to launch off of grass.  The runway has a pin for stooge launches.  When I started the plane, it was ahead of the pin, but as I walked out to the handle, he pulled the plane closer to him.  That put the tail behind the pin.  When I signaled release, he let go and the tail skid hit the pin, causing the plane to nose over.  Instead of stopping the engine, it kicked back and started running backwards.  Gotta love reed valve engines.  The plane ran backwards into my son and he tried to catch it.  It stopped, and I thought it had nosed over and stopped.  But as I was walking over, he was holding his hand and I asked if he was alright.  He looked down at his thumb and it was bleeding. “Oh.  I cut myself”.  After getting a paper towel to clean off the blood and make sure it wasn’t serious, I couldn’t help myself.  I yelled out, “YES!  MY SON IS A MODELLER!!!” 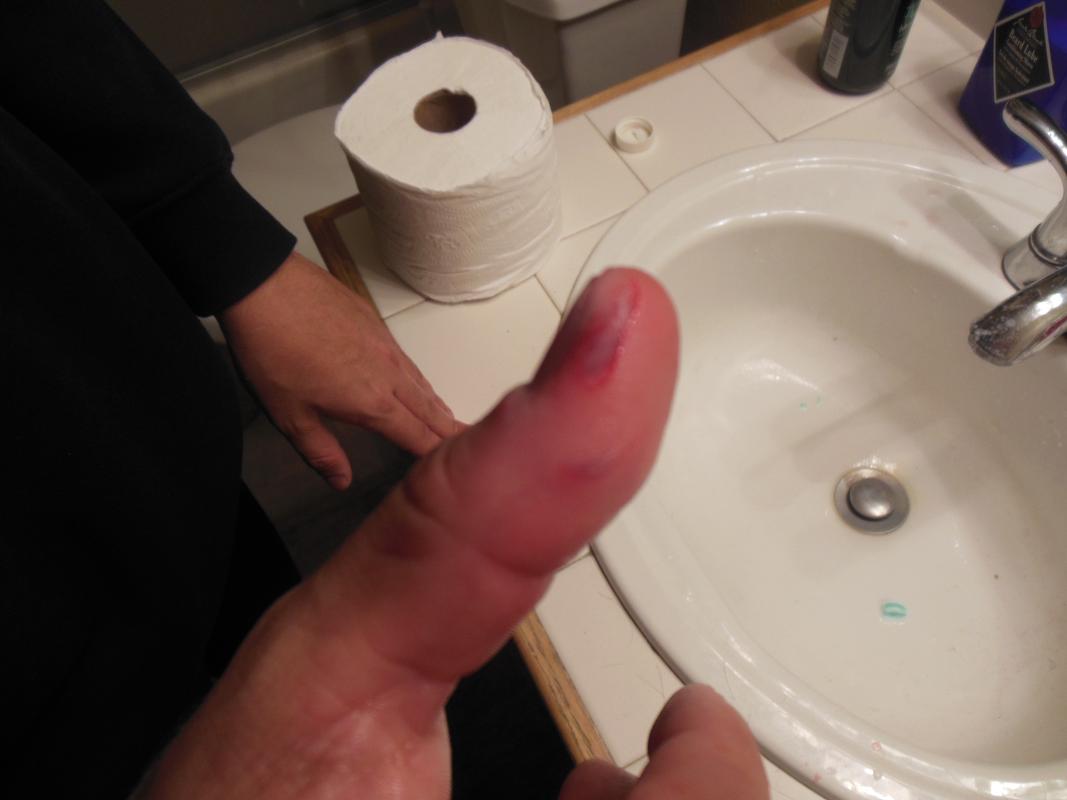 At 22, I had all but lost hope of ever being able to say, “My son cut himself playing.”

Ahh, a rite of passage! That's probably much better than changing diapers and watching first steps? Definitely and Dad & son moment, that your both old enough to remember. Congrats to both of you.

The first reedie finger bite yup as it's been said a lot where I'm at, "you're not a modeler until you receive your first finger bite" I can remember my first one too and it was a big ouchie lol. Eight years old with my Testors fly em P51D mustang started it and didn't have a good grip on the model, got away and went into my hand and got my thumb. stitches!!!

Any way...I get it....My son is not mine nor adopted.... but when he can he is my hobby buddy car stuff, wood working, shootin, and playing with airplanes

I know what proud dad feels like... good stuff Mark

Now he simply must experience raw fuel in the new wound... part of the pain, and necessary.....helps to get brain to think...That hurt...never again!

Yours is a very endearing story Mark. I'm no stranger to a separated family living situation. It does my heart good to know that the two of you are bonding. You're both lucky to have been able to get to this point.. and I wish for you both; many more special Father and Son moments together!

Great story, Mark. It is even greater that you guys had that moment together. Thank you for sharing. Good stuff!!!

My son's first propeller blade cut came on a Cox helicopter. I forgot to yell.

Mark and Son that's GOOD stuff to hear and ,, get out there and have some FUN!!!

Don't remember my first wap of the prop but i do that last one !

I’ve come to the conclusion that this wasn’t a freak accident. I’ve always said that a model isn’t a plane until I’ve: 1) superglued my fingers to one of the parts, or 2) cut myself and bled on the plane. These make me one with the plane and please the model airplane gods. This afternoon I suddenly realized that I neither stuck to nor bled on this model. So, when I tried to fly the plane without making the proper sacrifices, that angered the model airplane gods. They took their retribution by causing the engine to bump and run backwards, so they could receive their blood sacrifice any way they could….

I have occasional bled on a few models and they did just fine--- so I tend to think Blood is not mandatory..

BUT I have never built a model without pain or curse... I believe there is a Model God you must pay some homage too

The occasional re-kitting was probably caused by NOT enough building cursing or pain.... grin