Just stumbled across this photo of Ken Willard presenting his endurance model to the Smithsonian Museum in 1964.  His record-setting flight was in April 1958.
I hadn't heard of this before, and will now be on the watch for it in any 1958 magazines I come across, and will scan and post it here if I find it.

Wonder if this plane is still viewable at the Smithsonian? 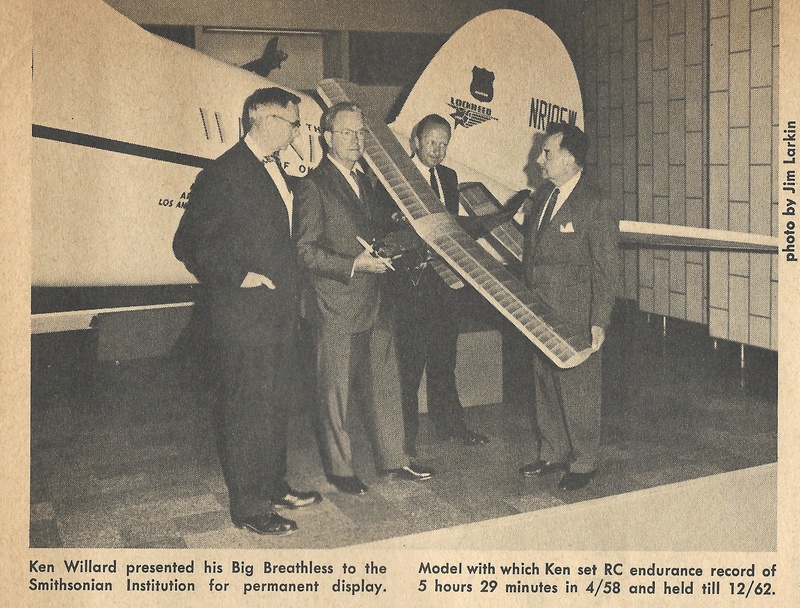 Yeah...so many of these guys cranked out designs like a factory! There's ALWAYS something new to learn about their exploits !

It flew 5 hours and 29 minutes...any information about what engine powered this plane? A TD051 - if not too small for the purpose  - would need at least 50 ounces of fuel to run so long...oooops just remember TD-s were born only 3 years after this 1958 flight..

Well, that this "Big Breathless" made its endurance flight the year after the "Breathless" was published would indicate he just scaled it up slightly for more wing area to carry the fuel and flew it on as small an engine as he could to get 5 hours out of it. He probably made sure to fly on a day with great thermals.

@Kim, I know this post is 5 years old also, but shares some things I like, for example, Ken Willard's history. I searched the 'net for the engine size of his larger 50+ inch wingspan Breathless, but could not find an engine size. Yet, by looking at the hands holding the airplane, appears to have an 8" propeller. I believe that it would have to be the smallest engine available to power the plane during its haul over the ocean to Catalina Island I believe, which means at least 30 to 35 MPH, the speed of the Minnie Mambo in flight.

I'm guessing that it is probably a .09 - .15 engine, one of the cross scavenge of the mid 1950's to turn an 8" propeller. It could not be a .049, because of the draggy proportions of the model with cavernous fuselage. This would help it to have enough wind penetration yet be economical on fuel. What amazes me is that with the primitive radio gear of the time, to be able to control the plane's heading and altitude under full control with such an over water flight, and later the 5.5 hour duration flight without fail.

The smaller 40" wingspan Breathless has similar proportions to the 36" Minnie Mambo, probably flies very similar. I've built Ken Willard's other planes, the 20" Roaring 20, a total blast with a .020 Pee Wee on pulse proportional, learned to fly on his 27" Schoolboy with .020 Pee Wee. His 39" original Schoolmaster with OS Max .10R/C on pulse proportional with auxiliary throttle was a total blast to fly. Both the Roaring 20 and Schoolmaster would stunt like crazy on single channel.

Yes...these types of flights REALLY captivated my imagination as we began our first "flirtations" with R/C planes in the late 1960's.

Of course, at the time, I could only dream of such things, but watching (and often chasing) my Minnie Mambo and its Citizenship Escapement radio, the thought of an R/C plane actually going cross-country was just too cool to ignore.

The more I learned about radios in general, and this vintage in particular, the more impressed I became!

That Breathless plan is cute as a button!…Yes, Would make an excellent platform for endurance with increased size and load capacity… I’ve done three of Ken Willard’s “School” designs as three channel-electric power and all were excellent flyers…. Next will be gas though!!

Maynard Hill was another vintage record setter I used to read about in the model mags for altitude, distance, autonomous… etc… Interesting modeler…