Been a little busy lately. But since I said I'd weigh this model, I went ahead and did just that as the glue dries on my speed plane.

Next time I build this one, it will be from scratch. I will probably pare out a good bit of several ribs, and do a lattice-frame fuselage with a thin skin where the wing goes through, and paper on the back half. The engine bearers will probably be wood beams custom cut to rotate the engine around to drop the venturi closer to the centerline of the fuselage so the tank will line up better. Right now, the tank is a little higher, and the engine is on a plastic mount. I will also shorten the nose a bit. Box-stock I have about 3/8 ounce of solder wrapped around the tail skid. Maybe even sheet only one side of the nose with thinner plywood. Anyone think this plane can get lighter? What's a Jumping Bean or Baby Ring Master weigh?

Jim, what exactly are you seeking? Are you going for looks or flying maneuvers? The Musciano design planes are not really suited for maneuvers. Wingspans are generally  too narrow, small elevators, and many more things. Certain designs just outperform others. Weight can be a factor but there's just so many other things that can be a deciding factor as to how the plane flies. I will say that the only 1/2A's I own that are heavy are Cox RTF models.

My stock Sterling Baby Ring is 5.50 oz's with no gear. The Brodak version is much much lighter and flies much better. I just flew a plane yesterday that I built last year which is 23" and total weight with Black Widow is 5 oz's. It flew quite well and the speed was probably the fastest I ever flew using a Black Widow. A Jumping Bean flies well however it can be a bit twitchy. The Brodak Baby Clown is an excellent flying plane. The Brodak Clown hands down gets my vote for a maneuverable 1/2A, it has a constant chord wing, it builds fast, it utilizes beam mount construction for Norvel's TD's etc. It also has ample space on the nose for a tank.  A Flite Streak is also a very good design. Brodak also makes the Lightning Streak which is a Flite Streak outline with the exception of different tail feathers. The Baby Lightning Streak offers decent wing area and maneuverability. Mine weighs 7 oz's with a Cox product engine.

Ken,
I hoped to do loops and inverted flight. Horizontal eights would be nice, but not important. I guess I'm expecting too much of this plane, but it sure looks good flying! Like I mentioned before, wingovers are nice to watch, although they do mush out a bit pulling out of nose down.

Looking at your numbers tells me this pig will never really fly more than up, over, down and level out. I need to try one of your mentioned planes just to see how a reputedly from e flier behaves in my hands. Thanks for your models' wieghts. Goozgog's FW-190D over on SH has a bunch of squares over the P-40, and weighs about the same. So either I find the fat, or a skinnier bird!

Thanks for your guidance during the sorting out period. I'm calling this one done.

Keith's building skills are some of the most amazing I have ever seen. Not only are some of his methods done with some very innovative ways, they're also extremely light. From the building to the finishing, he's just a impressive modeller.

Two seasons of really mediocre wing-overs, and a couple of failed loops...even with the ground dropping below horizontal. I finally had enough! So I spent the first flight checking wing-overs...and almost lost it to soft lines once. The next attempt failed as well. This time the plane pancakes on a not so soft figure 9. It did skip...so I counted that a positive.
Second flight I whipped the plane a bit to see if it could carry speed to the top. Once I felt good about that, I went back up, and at the top of apogee, gave it all the down it had. It skipped the ground at great speed...skipped hard enough to shed parts along the path of parts: 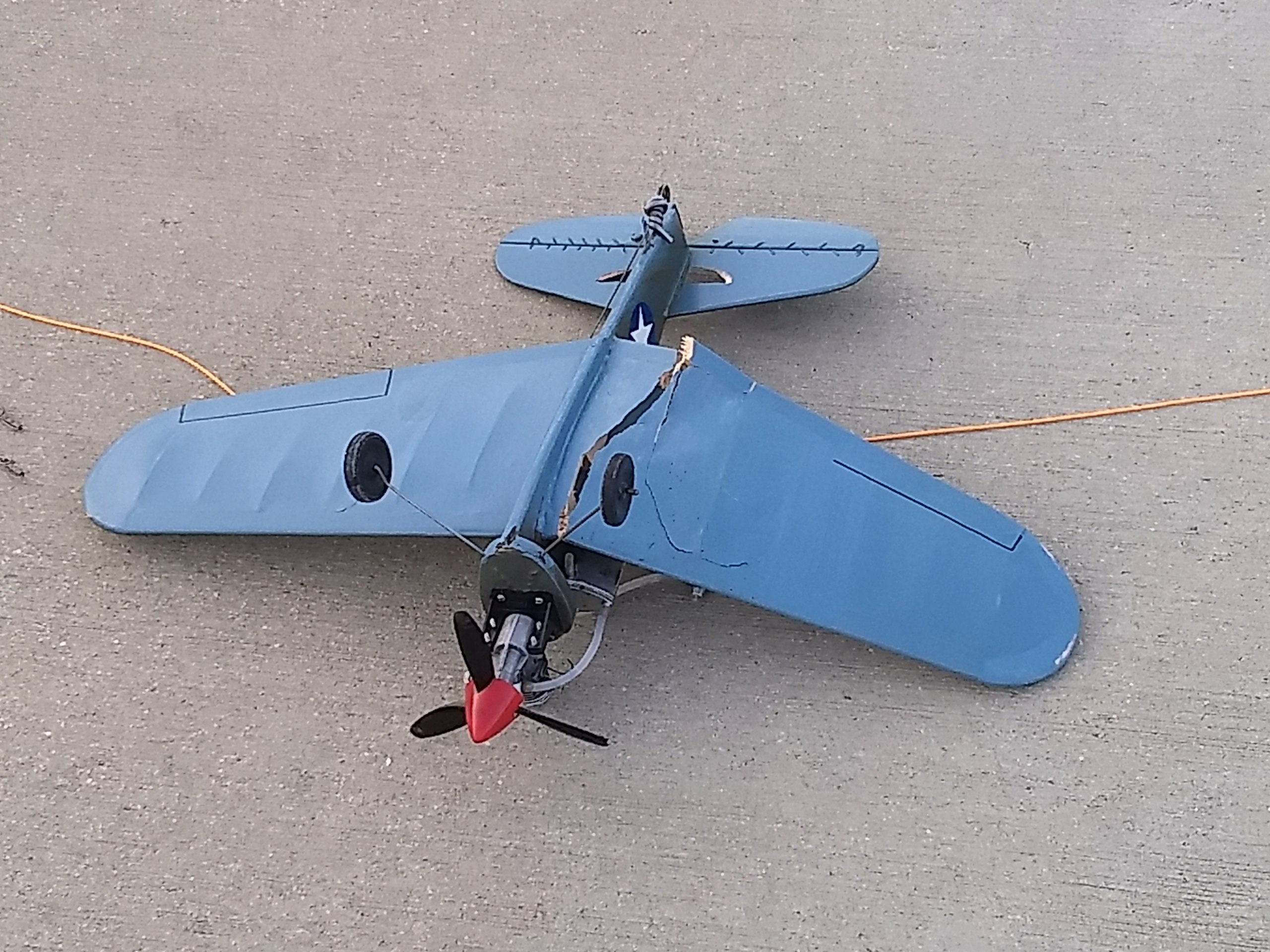 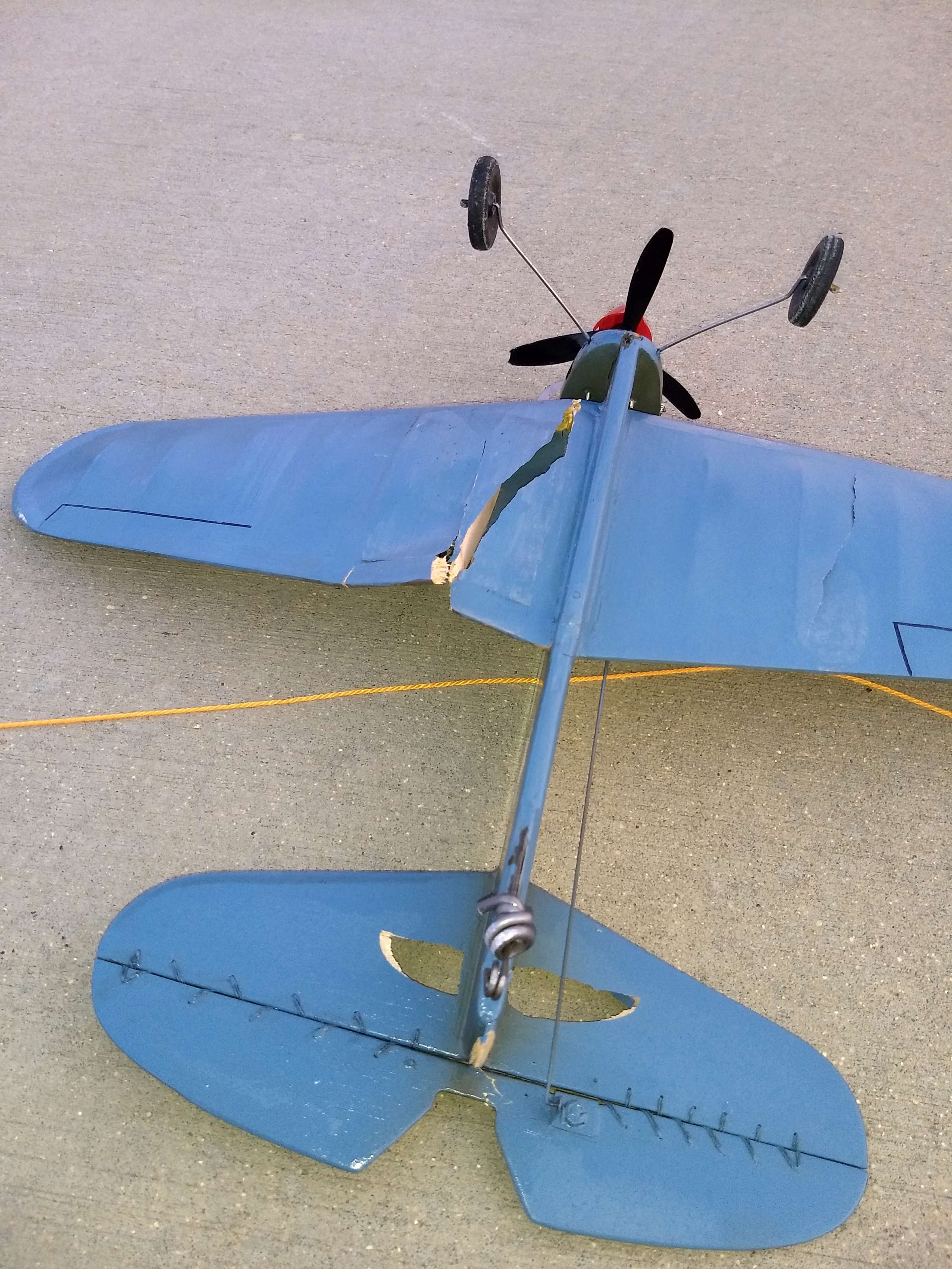 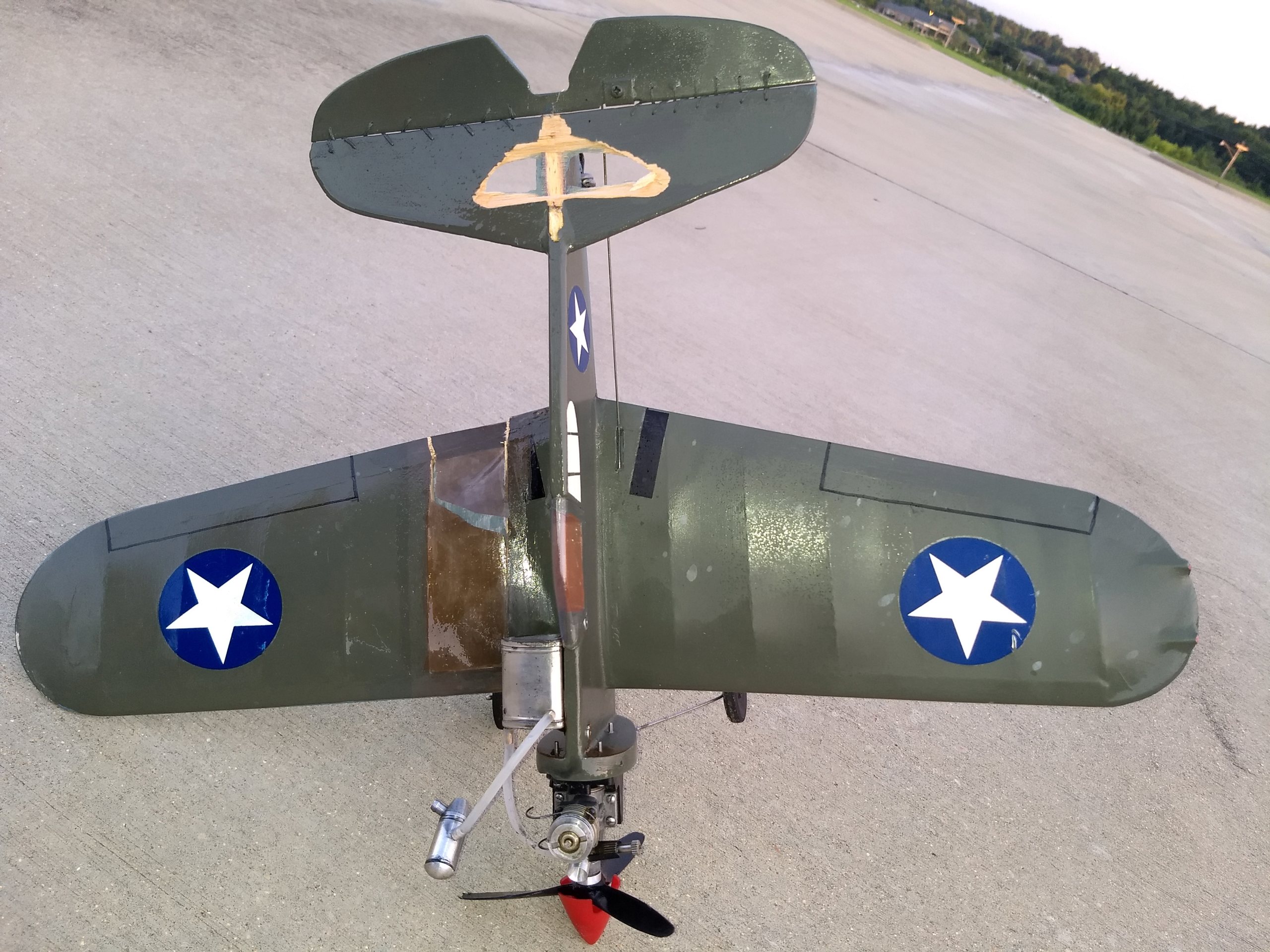 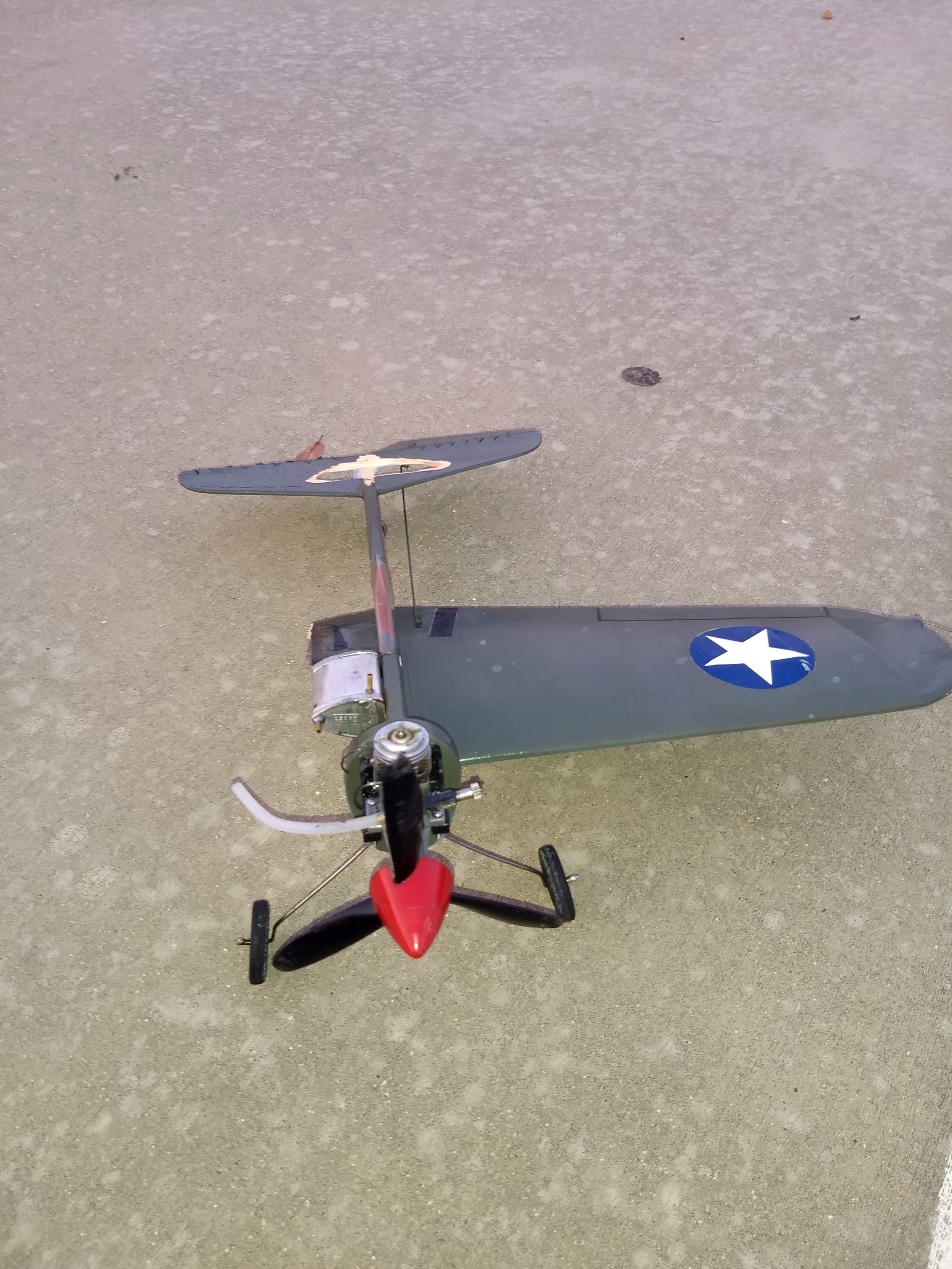 I admire you getting out and making things happen, but I think you are at a point in your flying that you might want to consider another plane. In terms of stunt hat P-40 doesn’t have a lot going for it.

Once you build something that really flys well you will see your skills improve dramatically.

Sorry you broke your plane, but it died doing what it was supposed to do! (Plus it’s fixable)

I am having trouble understanding why you were giving full down? Reverse wingover? Outside loop?

I also commend you on your vertical stab attachment, never seen one take so much away breaking off!

Jim, that's not a good crash. Sad to see that. It does happen though and I myself had my share of those. I get mad when it's stupid stuff like hardware failures.

Hay Jim least you are flying . And don't forget with every crash you learn something. Nice plane so put it back together . They fly better after they get a little beat up .

Ron, yes...early pullout from a reverse.wing-over. Or the start of an outside loop. Either way, it had speed!

Ken,
The crash was spectacular! Usually the plane hits the concrete and bounces once or twice before stopping in a pile.
This time it bounced once, and came to a grinding halt in just under a 1/4 lap, shedding parts along the way! It even ground some cylinder head off. Now the engine is lighter: 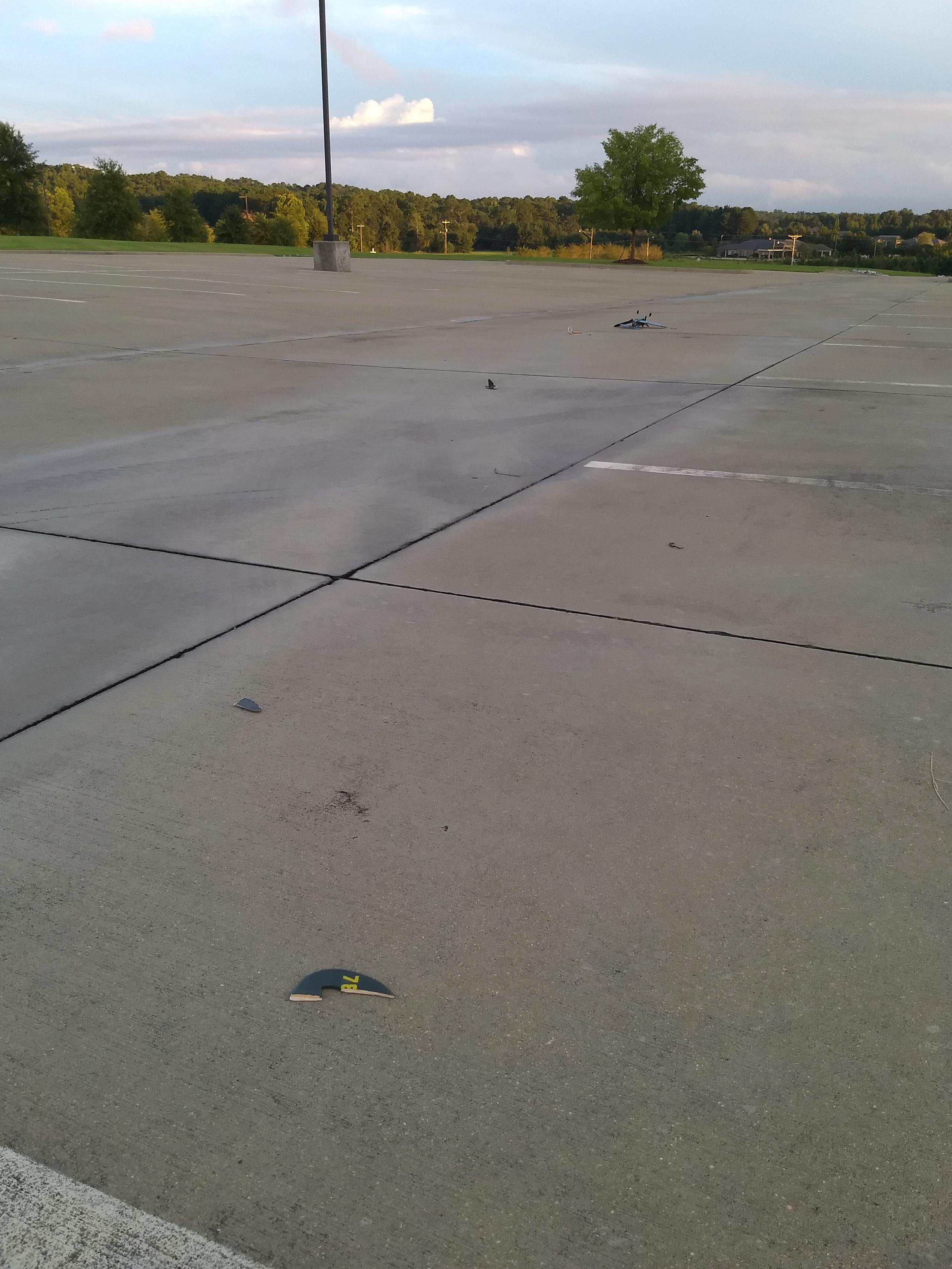 Thanks Mike. This ain't the first time for this one. I'll probably put it together and hang it in the house. I'm ready to build a better flying plane anyway.

@rsv1cox wrote:Hi Jim,  It's an out of the box Sterling kit.

I'll keep this kit in mind once the dust settles over all.of the other kits in the pipeline.

Sad to see the demise of your P-40, but it provided yeoman's service.

Good luck with your next one.

Hea i don't think that plane is wanting to do the things ur putting it through, Build you a flight streak , stuntman 23 They don't cost that much and will perform tricks much better > Sorry the P40 got beat up and like Ron said never seen a fin come off and take out so muck meat with it ! Good building there !

@getback wrote:Hea i don't think that plane is wanting to do the things ur putting it through, Build you a flight streak , stuntman 23 They don't cost that much and will perform tricks much better > Sorry the P40 got beat up and like Ron said never seen a fin come off and take out so muck meat with it ! Good building there !

Also those elevator stiches fit right in with the broken up theme. Look like appendix stiches of old before they started drilling holes and poking robots in there.

Amen on the Stuntman 23. I have a prison workshop Stuntman 23 built from an original kit that I use as a test bed for engines. It was gifted to me, is ROUGH as a cob and somewhat overweight, but will do all round pattern maneuvers except overhead eight on 35' Dacron lines and a single port Golden Bee. And I'm not a good pilot.

@rsv1cox wrote:
Looks like the dust settled Jim.
Sad to see the demise of your P-40, but it provided yeoman's service.

Good luck with your next one.
Bob

Good thinking, Bob. This may be the time to try a bigger P-40. Was yours able to do some stunts? Looking for wing-overs, H-8s. I/O-loops for now.
TIA

@rsv1cox wrote:
Looks like the dust settled Jim.
Sad to see the demise of your P-40, but it provided yeoman's service.

Good luck with your next one.
Bob

Good thinking, Bob. This may be the time to try a bigger P-40. Was yours able to do some stunts? Looking for wing-overs, H-8s. I/O-loops for now.
TIA

That was why I thought it curious that yours wouldn't do more involved stunts because our airframes were so similar. But then my Enya .19 would really haul that P-40 around. Yes, it was my only C/L model that would do loops and fly inverted with ease. I think I have mentioned that those visions are burned into my brain.

I can't remember figure 8's, not sure if I ever pushed it that far. But, in the recent past I have awoken from dreams where I have been flying C/L like in days of old.

If I had the guts, I would get out there and do it again.

I really think it was too heavy once I had the .061 on there, and balanced as it was (look at all that solder on the tail skid).
While it flew better roundie-roundie with the AP, it seemed to handle better with the Golden Bee. I need to check the squares and see what it was. This may be worth scaling up 15% with the AP or Norvel. But that will be some other day.

It's more a problem of proportions, wing area, airfoil thickness and aspect ratio than anything else.

Yep, my Skyray would be a bag-o-balsa right now if I had been flying it over pavement. Tall grass has saved it more than once.

OK,
Dragging this one out of the crash hanger...this kit made Outerzone!

WooHoo...looks like I may have a side job popping out scans for Steve at OZ:

WooHoo...looks like I may have a side job popping out scans for Steve at OZ:

Can't miss that glass cockpit Jim!!! You should receive royalties.

I scan through hobby related internet sites often and see my models and engines pictured. Kim's are frequently captured too.

So THAT'S what happened to it! First I've heard "the rest of the story". Bummer, I
really liked that one! Always been partial to P-40s. I need to find a replacement for my mint cox P-40 that I abondoned in a move decades ago. Got sick of moving stuff i never used. Course after retirement I got "reinterested"!

Ah, Tico...doinking into 8" grass gives a plane another pass...taking off of 4" concrete is really sweet!

Sorry...that's the best I could come up with in over a year!

Ya....tall stubble in a mowed hay field ain't so great either.  Bottom of the widow satan wing is more clear packing tape than  tissue now!  But THAT'S holding up great!.....and thats just from landing!,no doinks!