Log in
Search
Latest topics
» Deepest condolences
by Oldenginerod Today at 1:23 am

» Hey Eric! Your puppy is a Moon Buggy!
by akjgardner Yesterday at 3:16 pm

» More KK Radians
by Marleysky Yesterday at 11:17 am

Sorry to be self-indulgent folks.  Just feeling a little on the low side.  Bid farewell to our baby son (20 year old) this week as he seeks greener pastures. Doesn't seem all that long ago that I was showing you this.
Here's young Fletch proudly holding his freshly-built (at the time) Blackhawk L'il Bat. 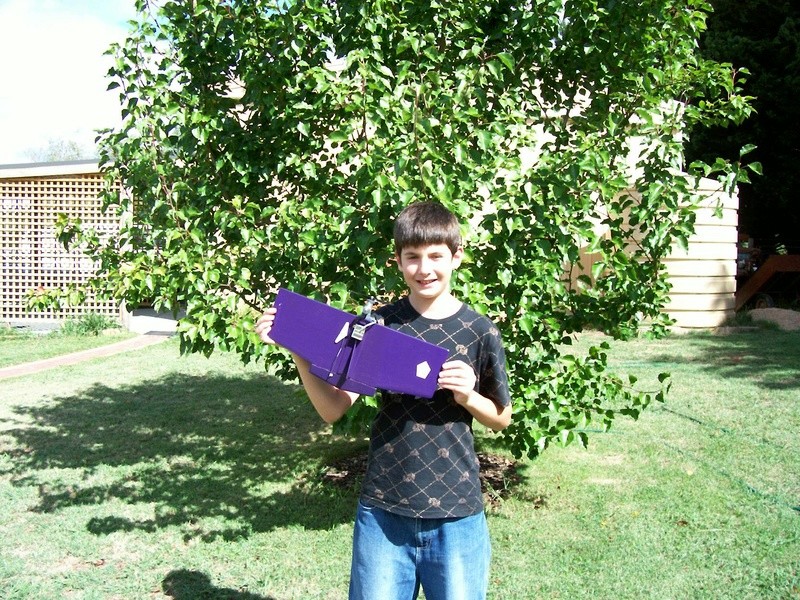 Well, he grew up.  Model planes never did it for him so the l'il Bat remains flown only by me after his first, second and third unsuccessful attempts.  Recently the surfer/hippie genes kicked in.  This is him recently with his new nephew. 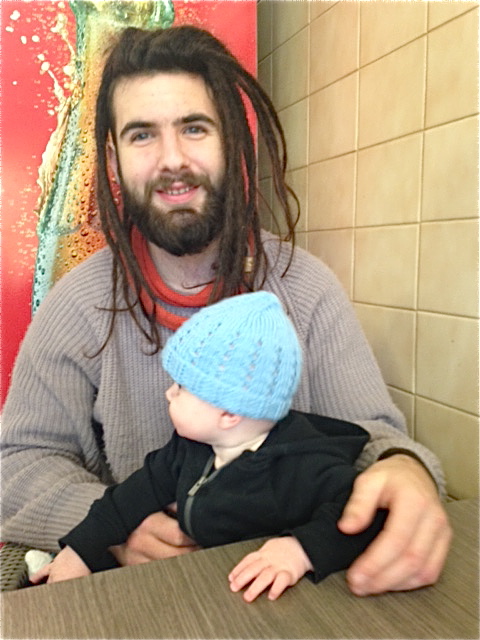 He got tall, grew a very substantial beard and got dreadlocks.

Now, he's off on a big adventure. 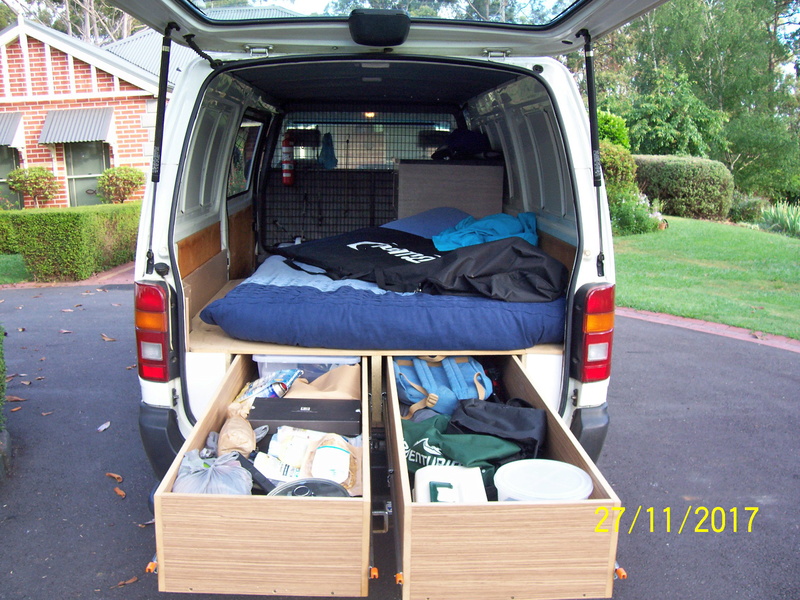 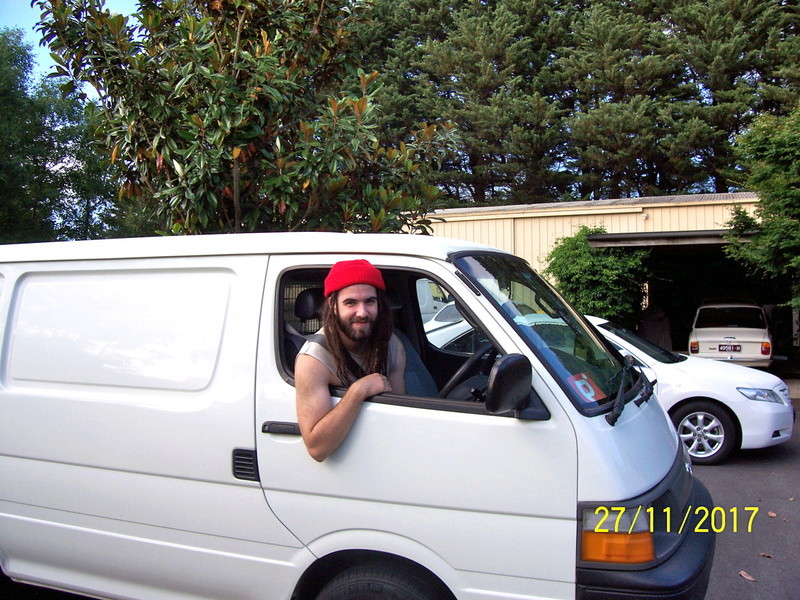 ) to a music festival and to chase some waves around Byron Bay, Northern New South Wales.  Well, he now has landed two jobs up there and apparently there's a young lady waiting for him.  He's leaving a couple of broken hearts behind including his ex-boss who begged him to stay.
This has all happened real fast and it doesn't help that I'm stuck here on my own following knee surgery and my wife is away on an 9 day bike ride.  Jest felling a little sad and lonesome.

Everyone tells me that ya gotta let 'em go, but you can't help worry about them.  The trip's about 1,600km (1,000 miles) and he's trying to do it in two days on his own.  That girl must be pretty special if he's in such a hurry.

When jr. went off to college, i had some issues as he was my best friend and i missed him not being around. A year or so later after having the house to ourselves with no kids (other than our li'l doggie) we're pretty comfy, i know where all my tools are, the garage is my mess and when he shows up it's kinda like, lol, how long you staying? It's great to see him, but he's got his life now. The point i'm trying to make is the feelings will change, it just takes time. He's still your li'l buddy, but he's a young man now.

(Greenie to cheer you up, we've been there) 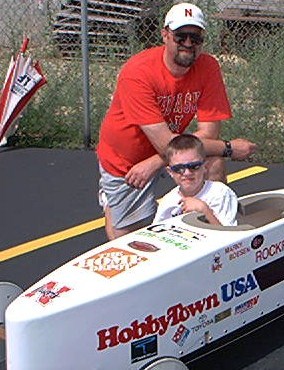 I think I spent too long in the military. The first thing that comes to mind is that kid needs a haircut!

My son is 12, have a few years left, but when he leaves it will make me happy. Not because he is leaving, but because he is spreading his wings and becoming a man. Take solace in knowing you that you played a big part in that. Time marches on...

Thanks for the encouraging words Mark.  I know all that but it's still a little hard to swallow.  When his big brother moved in with his now ex girlfriend (the mother of our grandson- that's another story) we adjusted pretty quick because it actually helped to reduce our stress level, but now he's home again (d'oh

), partly because he (or his ex) blew all his money and he lost his driver's license for 6 months, so we have to be his taxi if we want him to keep his job.

Cribbs74 wrote:I think I spent too long in the military. The first thing that comes to mind is that kid needs a haircut!

Yeah, I know what you mean Ron, but other kids express themselves with tattoos, body pearcings, doing drugs etc.  I made the decision a while ago, if the worse thing he does to display his independence is hair stuff then I'll support that before the alternatives.  I hate dreadlocks, but it only takes 5 minutes with the clippers to deal with the problem when he gets sick of them.  His will grow back.  Sadly, mine's gone for good

Hi Rod, greetings from sunny Townsville. Today my 21 YO arrived in Cambodia and the youngest 18YO went south to a cold Canberra. It is rather quiet without them pressing each others buttons, but know how you feel. Love the pics.

Sunbird wrote:Hi Rod, greetings from sunny Townsville. Today my 21 YO arrived in Cambodia and the youngest 18YO went south to a cold Canberra. It is rather quiet without them pressing each others buttons, but know how you feel. Love the pics.

Hey Sunbird.  Feel free to reveal your name.  Not sure I can handle the idea of calling you Sunbird all the time as it triggers bad memories of an uninspiring (well, in my personal opinion) Aussie vehicle.

The "Torana" is a little more classic.  Sorry, as a mechanic everything seems to come back to car talk.

I know what you mean about the button pushing.  They can love each other to bits but treat each other like poop at the same time.

Byron Bay is scary enough but I don't know how I'd handle having one in Cambodia.  I suppose it's a whole lot easier to keep in touch these days. In the old days you'd just send them away and hope they made it home for Christmas, unless they could find a pay phone.

Young Fletch put in a bit of a marathon.  Made the trip in two days- arrived up there before dark tonight.  Bet you he'll sleep all day and still feel like crap when he starts his new job on Saturday.

Well then Rod, we both wish we had Fletcher's hair, of course we would be at the barbers the next day.  But it's what's on the inside that counts.

I know the feeling, Mark left for the Navy at 3 o'clock one morning.  Leaves a hole that can't be filled.  But then, a couple of months later you think - where did all this extra money come from?>>>>>>>

Mark B. Reminds me of the photo of my Dad, me, and my Soap Box Derby racer. Ran two years. Still have the wheels and axles.

I wish the Best for your son and family left behind , you will probably bee going to a wedding next LOLO ! Anyway i feel you as my now 19 yo is in for the haul and need to get him a job , he has a lot of things he wants to do but all cost $$$$ and without a dime just don't understand he don't . I understand the worry of your best friend going out in the Big world now days can be rather scary but , you have to let them go to do there own thing !!

They will call if they need U can bet on it!!

I understand OldEngineRod. Your thread is a reality check for this father of a 4 year old! I guess I have a long while to get used to the idea of him leaving home but as others have said my son is my best buddy. For all sorts of reasons I ended up the stay at home parent which, at times, was some of the hardest work imaginable but a good thing for bonding.

Hey Rod! I wish I lived closer man! I'd come over to talk.. and you'd forget all about what's bothering you!

(just kidding) Your son (Fletcher?) looks "happy" in that photo where he's holding his nephew! I love the "drawer-storage" in the surfing/assault-van!! Being a Musician.. "hairstyles" don't phase me. It's what's "inside" that counts. I'm sure that you raised him to be a respectful young man. Don't be surprised if "Eric's words" ring-true.. and you soon get an invite to meet his future wife's family!

Look on the bright-side... a "rehearsal-dinner" costs a lot less than a wedding!