Log in
Search
Latest topics
» Which teedee will perform the beyst?
by layback209 Today at 3:01 pm

Bouncing around again for the TE3

Bouncing around again for the TE3

Well, as Y’all have probably figured out, I bounce around a lot.  I was going to take a day and build a plane for the Travelling Engine III.  I have a SIG Buster that I was going to put the Medallion .15 in, and with the pre-shaped solid wing I figured I could get the whole thing done in a day easily using CA and Monokote.  Then after the TE3 is gone, I can use it as a loaner for someone wanting to learn.

I took the kit out this evening to look at it and do a little planning.  Man!  This kit is terrible!  The pre-shaped wood is warped, and part of the trailing edge is broken off.  And I didn’t notice it when I picked up the kit, but it only has 140 square inches on the wing.  For racing that may be good, but for training and sport flying it’s not nearly enough.  Not for a .15 sized engine.

So, on to the next plan.  I mentioned last month that I bought a SIG Akromaster on their Black Friday sale.  No biggie, I’ll just build that for the TE3 and keep it for a loaner trainer afterwards. I have an older Akromaster in a box in the closet, but I figured I’ll use the newer one as the wood is supposed to be better.

I opened up the plastic while sitting in on Rusty’s chat this evening.  Better wood!  Hah!  The stuff was also terrible.  The fuselage felt like hardwood.  So did the other sheets of balsa.  I pulled out the old kit from the closet and started comparing wood.  Here’s the fuselage wood between the two kits: 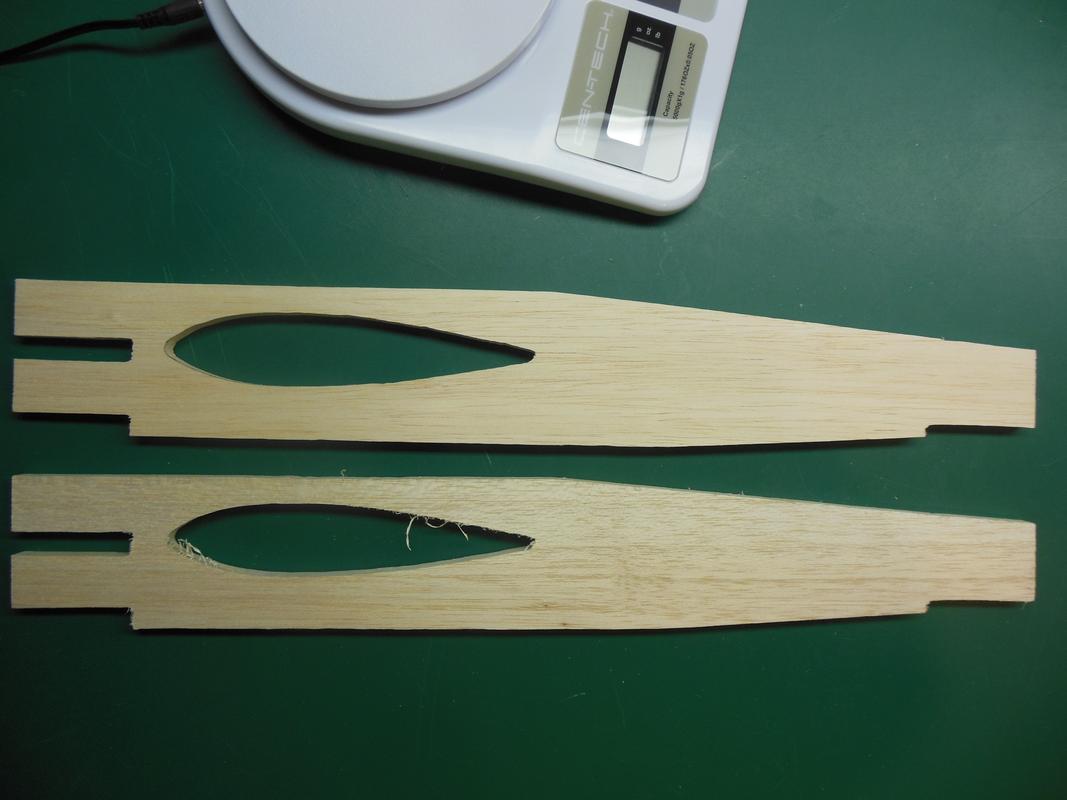 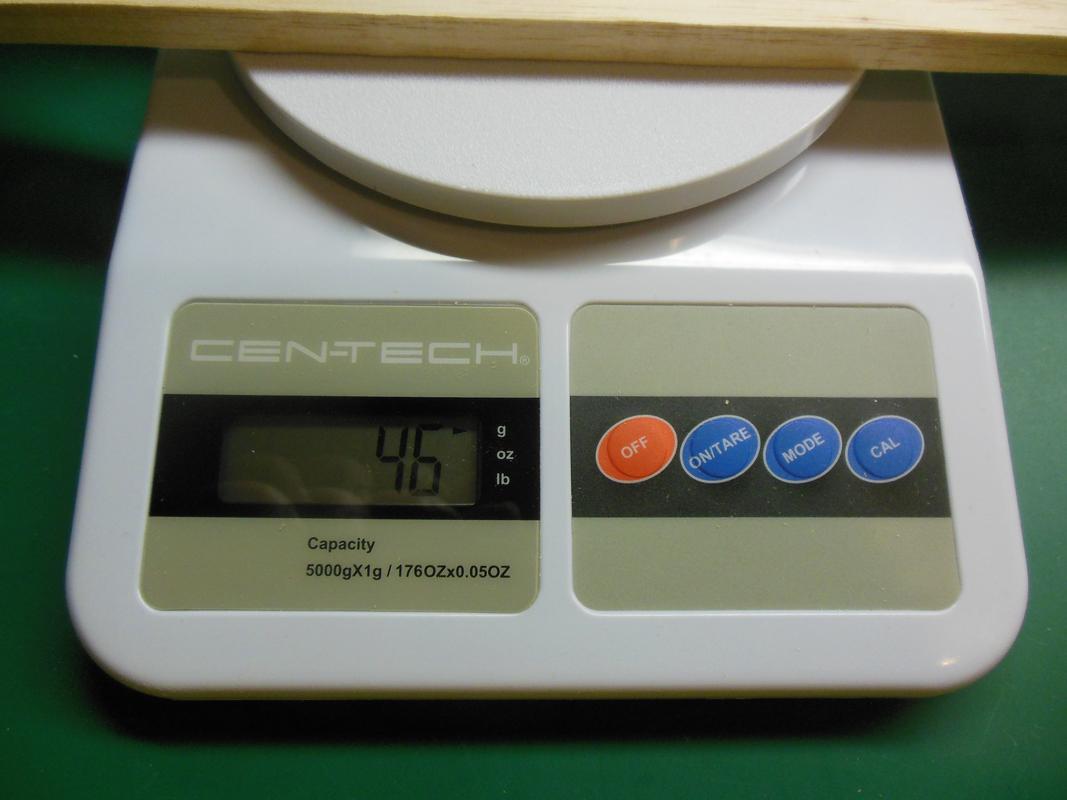 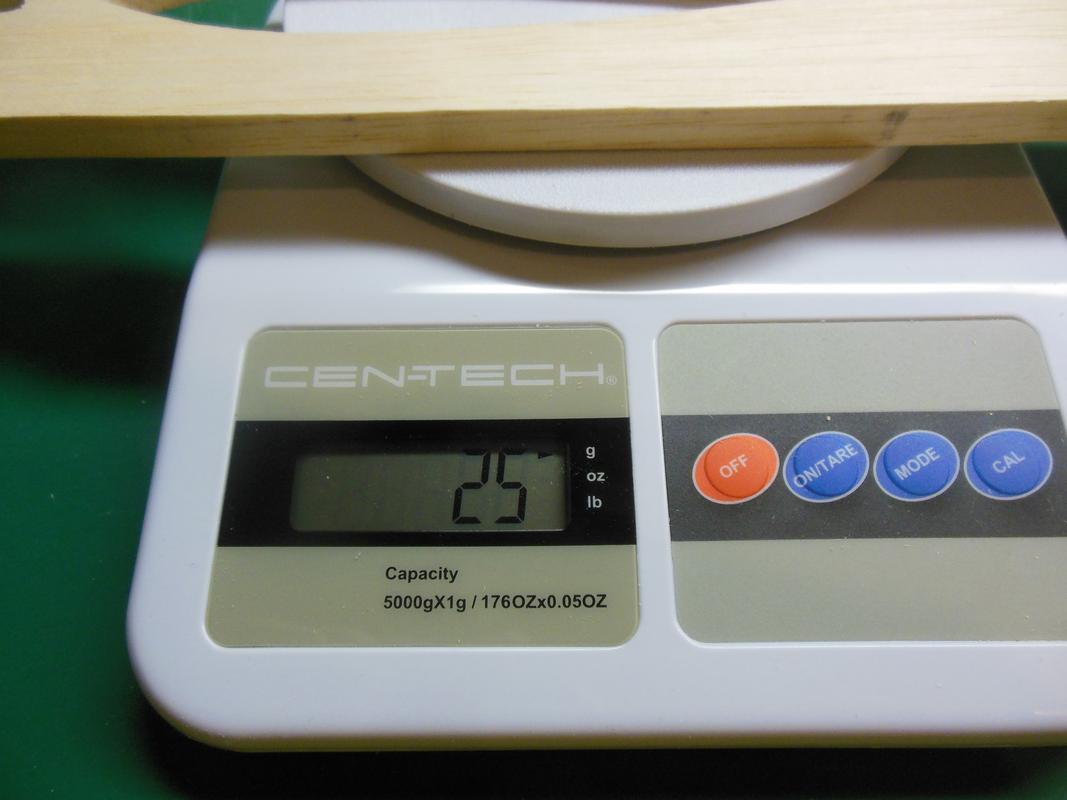 And check out these two sheets of 1/8” balsa that the elevators are stamped out of.  The older sheet weighs 11 grams, and the new weighs a whopping 27 grams!  That’s more than the new fuselage blank! 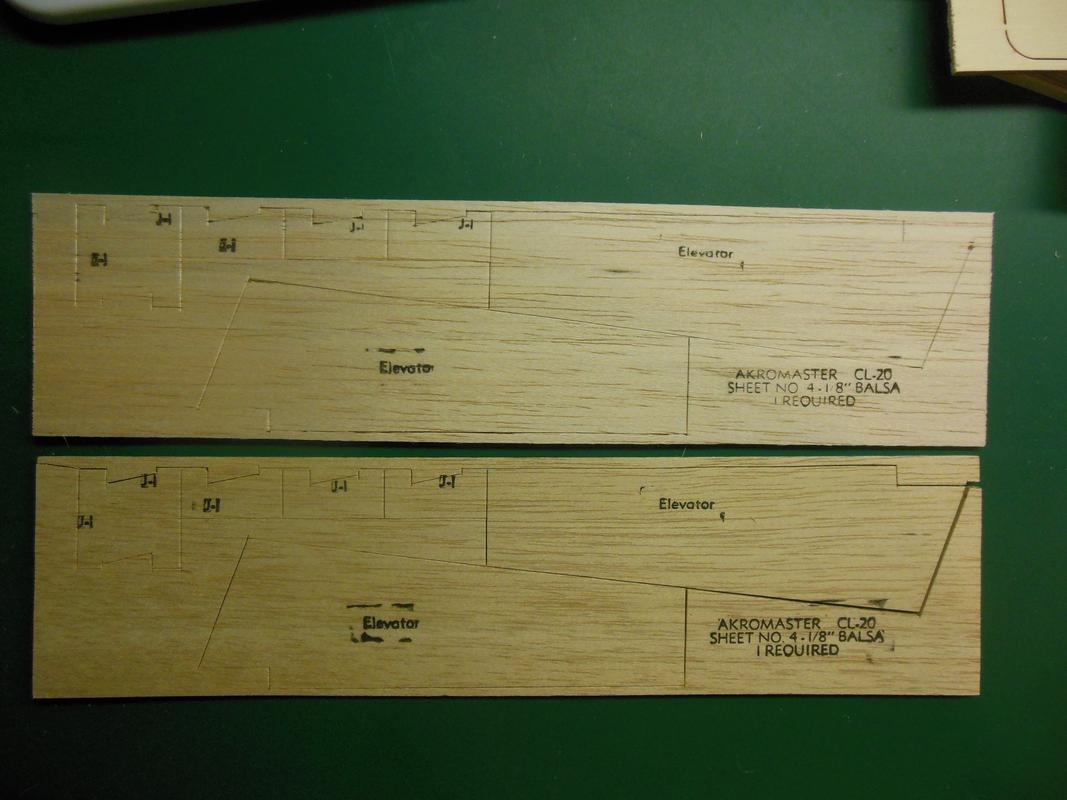 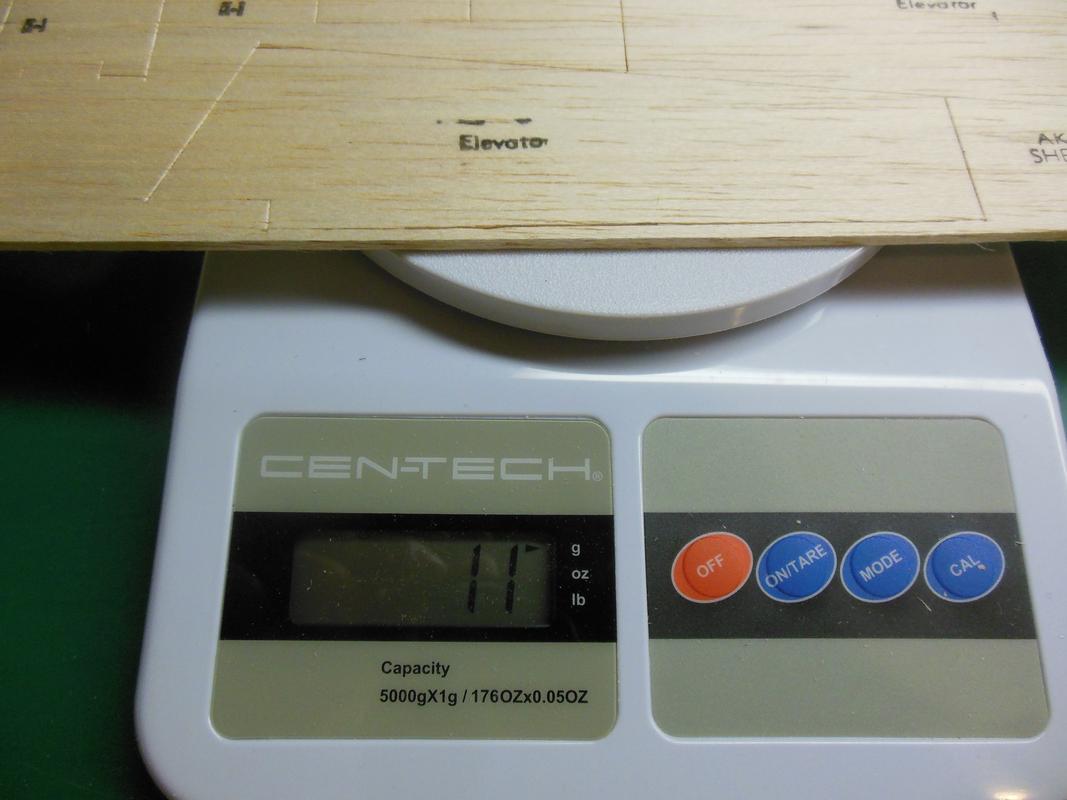 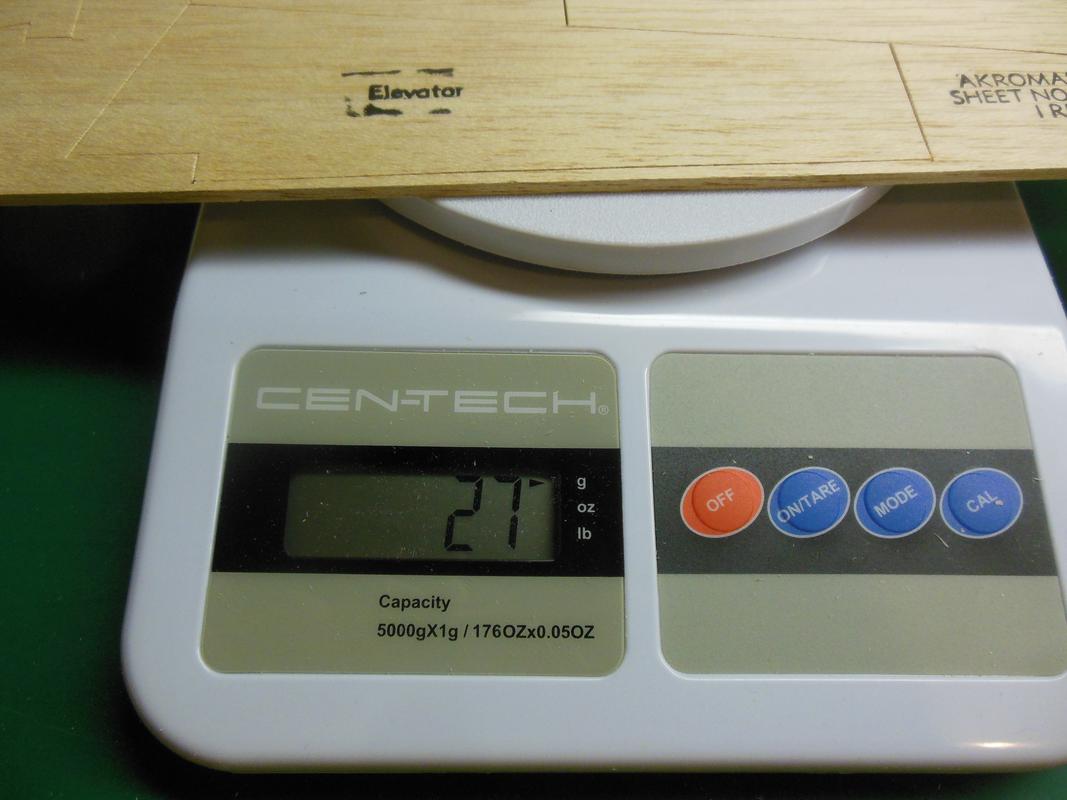 Now, I know the two 1/8” sheets have more than just the elevators on them, but the weights are just to illustrate how heavy the new kit wood is.  So, to get an accurate detail of how heavy the wood is, and to get the lightest plane possible, I separated the parts from their parts sheet for both the old and the new kits, and weighed all the parts.  Where there was lighter wood in the new kit (only a couple of items), I swapped it out with the older kit.  Then I weighed the complete lighter wood kit vs. the complete heavier wood kit.

I didn’t take pictures, but the total weight for the lighter kit wood was 175 grams, or 6.2 ounces.  The heavier kit was 229 grams, or 8.1 ounces.  A difference of two ounces!!!  Just for the bare wood!  Hopefully with the two ounce saving I’ll have a nicer plane for the TE3.  Pics as I slowly go along.

The Akromaster lacks wingspan. It flies out of the box, it does better when kept light and the wingspan goes out 1 bay inboard and outboard. The tail is a terrible design with two halves. It will fail and it usually does. The thin bass strip that holds them together is the failure point. The tail generally needs tail weight when using more modern stuff so using a Medallion may not require it. The nose is somewhat small making tank configurations a bit of a pain but doable A 2 oz. tank is all you need. If memory serves me correctly, typical Sig Lite ply which usually crushes out when you tighten the engine bolts. Converting the vacuum formed canopy to a piece of solid wood can possibly save your needle valve on inverted landings. The plastic just explodes. If using silkspan, I highly suggest a strong radius on the wing tip tiplets and making certain they're totally sanded flush with the spars and tip rib intersections. The compound curves in that area really stress the covering making it tear rather quickly even with iron on. As for Sig quality, well that's always been hit or miss. I suppose we should just be happy they're still making kits. Usually when I build a Sig kit, I'm throwing out half the kit anyhow. Starting out with Twister's , I was building 3-4 at a time and finding out the same things you have. I rarely, and I'm going to say never have had a straight piece of wood for the wing construction and would use only the ribs. It was inexpensive, it will certainly be fun to fly so enjoy it. Ken

I would never have thought there would be that much of a difference. They don't make 'em like they used to.

I wouldn't go to say that made them great back then either. Roll the dice, you want it light , pick your own wood.

Shoot i would have not even checked the weight between them being me , but that is a big difference , i got a Akromaster Sig kit i haven't opened (thew newer version) now i am not looking forward to a warped build or finding other wood to replace whats in the kit