» Tarno carb operation
by OVERLORD Today at 9:55 am

» What are the differences (if any) between Cox .09 TD and Medallion pistons/cylinders?
by getback Today at 9:17 am

» Model Locomotive stuff
by getback Today at 8:53 am

» Free Flight Modelling
by Ken Cook Today at 8:48 am

Fueled up the tether car, attached the fire, primed and it started first flip.  No kidding.  Running rich I leaned it out and noticed the engine was vibrating.  I have this habit of not tightening my engine case bolts when putting them away for storage.

It was difficult getting those little 2/56's in right the first time anyway and my fingers shake, but I did get the engine off. I did not want to disassemble the whole car again and have to remove the engine mount so I just used the top two screws to re-secure the engine to the mount as the bottom two are impossible to get at.  Tight enough for a test run. 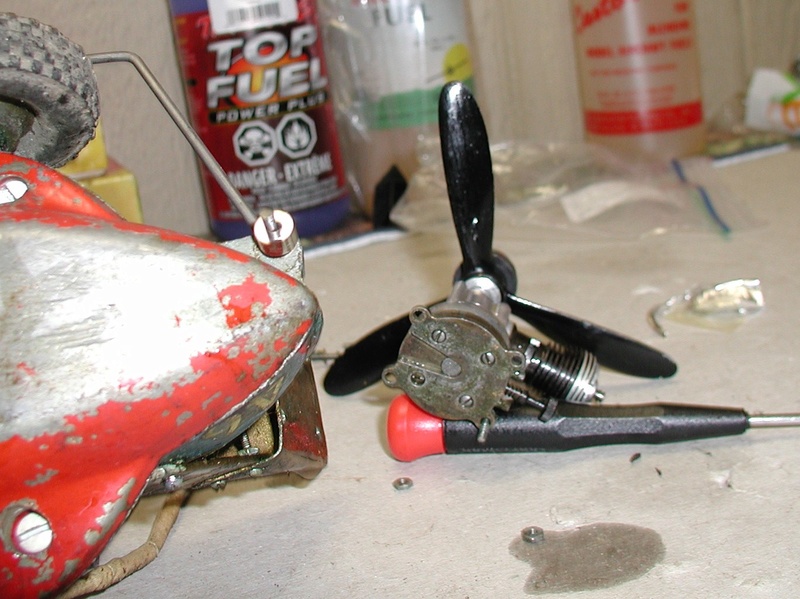 Brought everything out to the driveway and drove a pivot nail in the asphalt.  This time the darn thing would not start.  After 15 minutes of frustration I finally got out the 1/2A starter and got it started running great, and in the right direction.  Leaned it out to slightly rich and let it go after pointing the nose out of the circle. 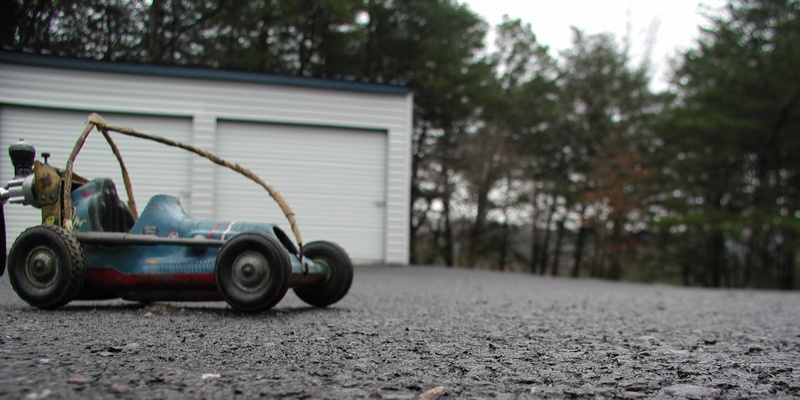 Traveling medium slow it got out 180 degrees to the high side of the driveway (slight slope) and came back towards me finding the tether and wrapping it around the engine shutting it down.  No damage. 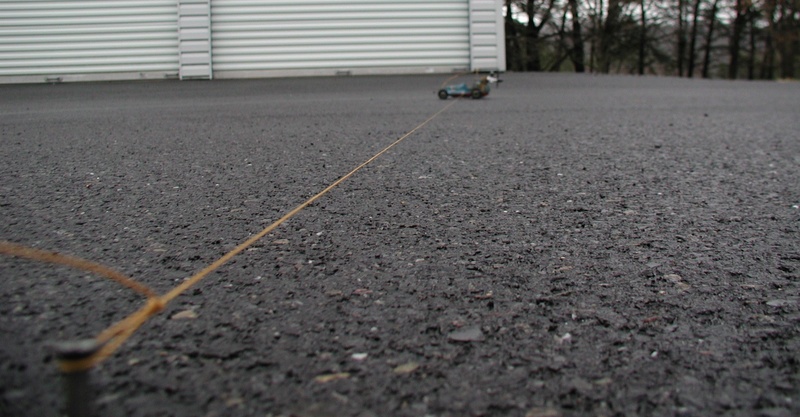 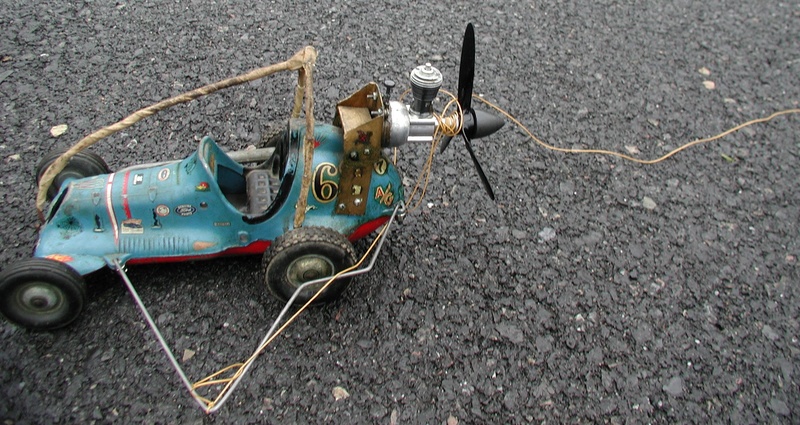 Future runs I will lean the engine out to max thrust and start from the high side of the driveway down. 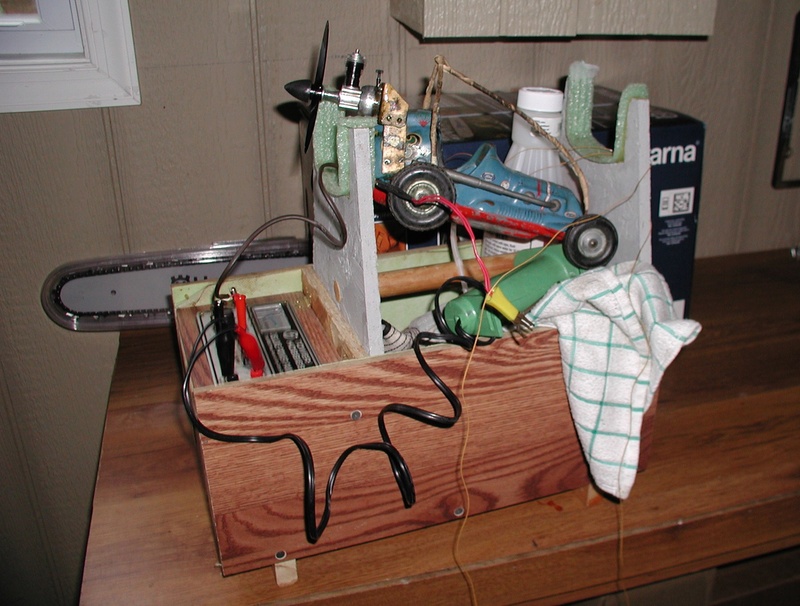 Kind of more fun than I thought it would be.

Kind of more fun than I thought it would be.

This "is" what was most important!!!

I ran it a little rich for it's first run as I had no idea what it was going to do.

I don't think the PO ever used a tether, probably ran it in a straight line into the dirt.

Bob, when you’re done with the MG, and tried of doing circles in the driveway, you can do this: 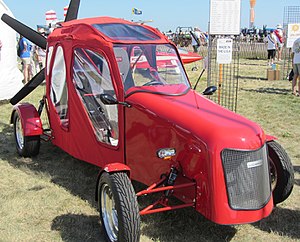 It’s a powered paraglider, with a roadable roadster.

I think the builder of your model grew up and did this.

HA HA way to go !! at least ur getting in the road with it !

Maybe he did Rene, Looks like the old N series Ford tractor I used to ride.

Eric, I thought I would run the rest of the fuel out of the tether car. It started right up using the starter and it ran and ran, so I leaned it out and set it off straight up hill, and the thing minus the tether just took off. It hit the grass and did a tumble.

Might not need to try another prop after all.

Good Deal !! You know you got to get us a video (and i will too when i get round to fixing the PR . Got a few irons in the fire and and and and LOLOL I need to find a piece of tapered wood to put in the broken mount then engine mount form hardwood /Mount/run /laugh! Way to go man good to see you out there having some FUN!!

Good Deal !! You know you got to get us a video (and i will too when i get round to fixing the PR . Got a few irons in the fire and and and and LOLOL  I need to find a piece of tapered wood to put in the broken mount then engine mount form hardwood /Mount/run /laugh! Way to go man good to see you out there having some FUN!!

My son gave me his old Tablet which will take movies, but I have no idea how to do it and upload to this forum. Don't you have to go to youtube first? I have tried to post videos from my computer that I took with my game camera here but it never loaded.

Yeah Bob you have to get a Youtube Acct . Cost $0 put video on there and pull from there to put the URL ? i think it is in the Youtube Block Icon, Copy and paste its not that hard after the first 5 times

Hey Bob.. a little test you could try for running the tether. Wipe/clean the front tires.. and wrap some cello-tape around the tread.. (a couple of wraps) This will allow the front-end to loosen-up or "float" while tracking the circle. If you find that the car runs faster.. the nose may need to be pointed "in" to lessen friction. You can adjust the bridle/tether to compensate for this. It's like dialing-in the "caster-angle"....... except you're applying it to the chassis.

Thanks for the tips roddie. I think I will try a variety of propellers once I get the balance figured.

I'm going to construct a new bridle, instead of terminating in a V the new one will resemble a U with a pinchable clasp that I can slide back and forth to obtain the correct position for a circular run. It might get it under control and save me making a bunch of trial bridles.

It took me about half an hour to knock one out. 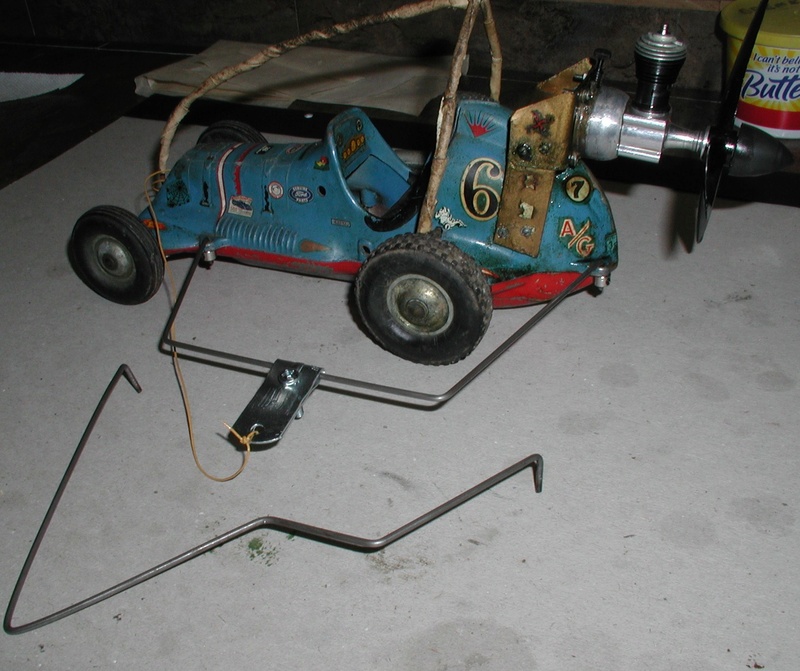 Pinch nut and bolt locks down tight but allows adjustment when loosened. Got about 4 1/2" of play. If that doesn't work I will have to go after a different angle making a bridle with a longer front leg. Any trig/geometry centrifugal force majors want to help me out........ As is I can achieve parallel balance but there are other forces in play here so really it's cut and try.

I could always put a rudder on it.

We have a winner.

I leaned the engine out and started from the high side of the driveway and let 'er rip. 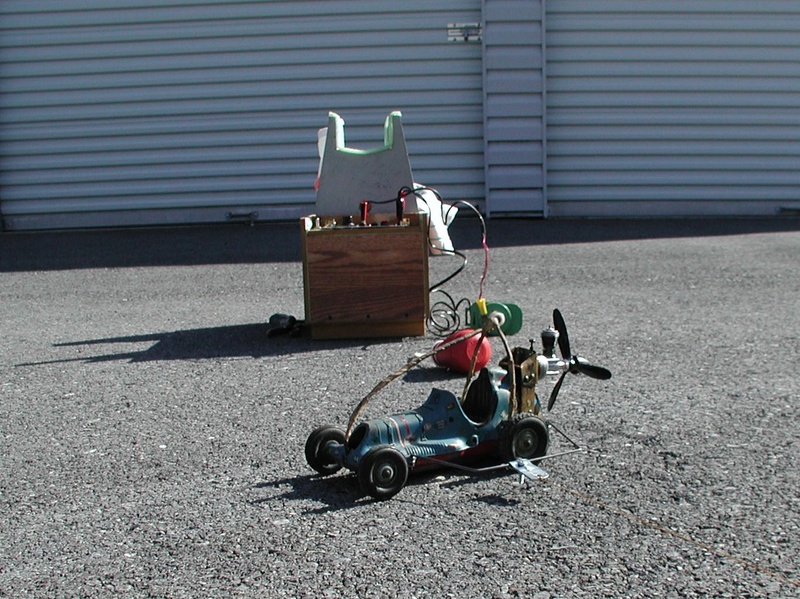 Front end was scuffing outward so I caught it with my feet and shut it down. I moved the clasp about an inch forward and set it off again running "straight" and true at a good speed. 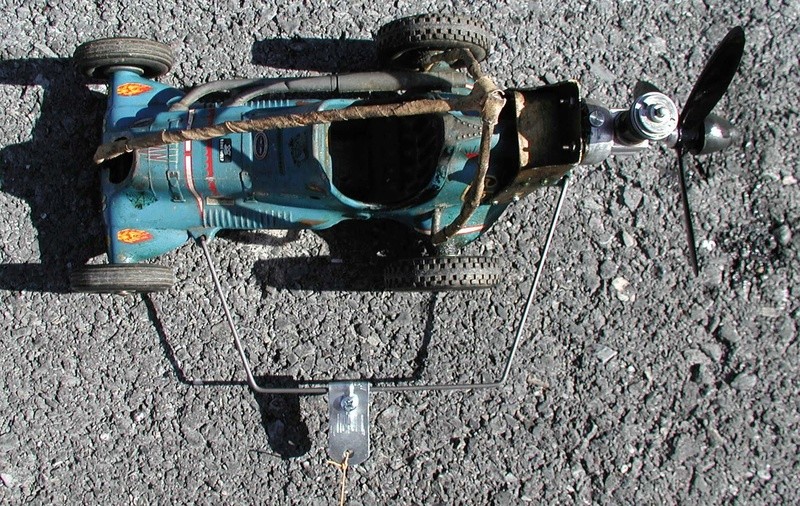 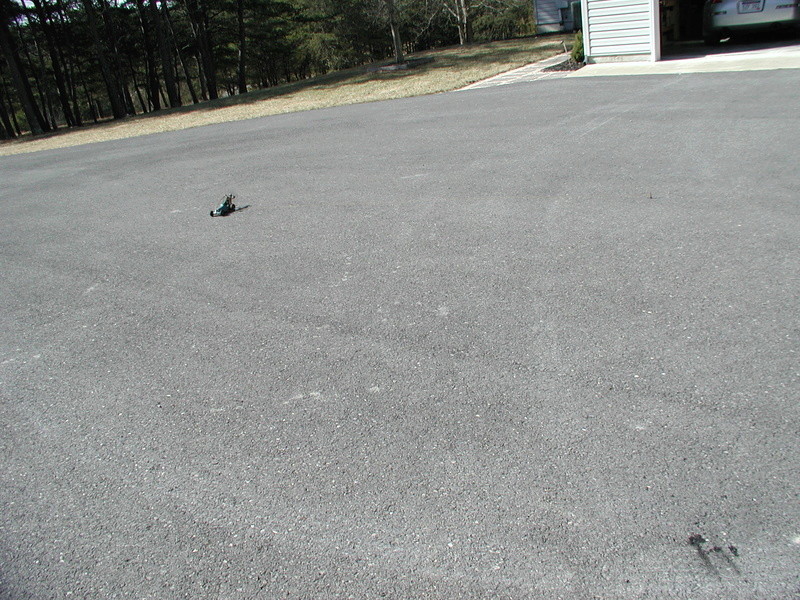 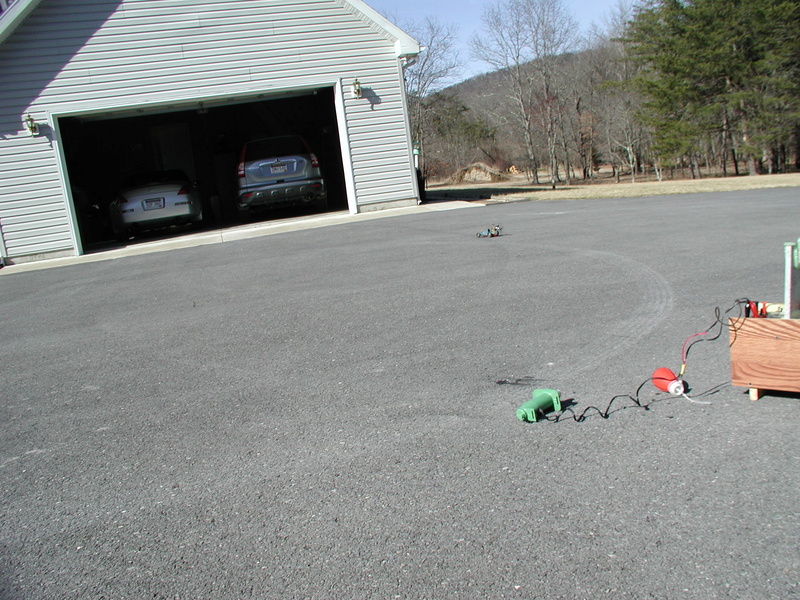 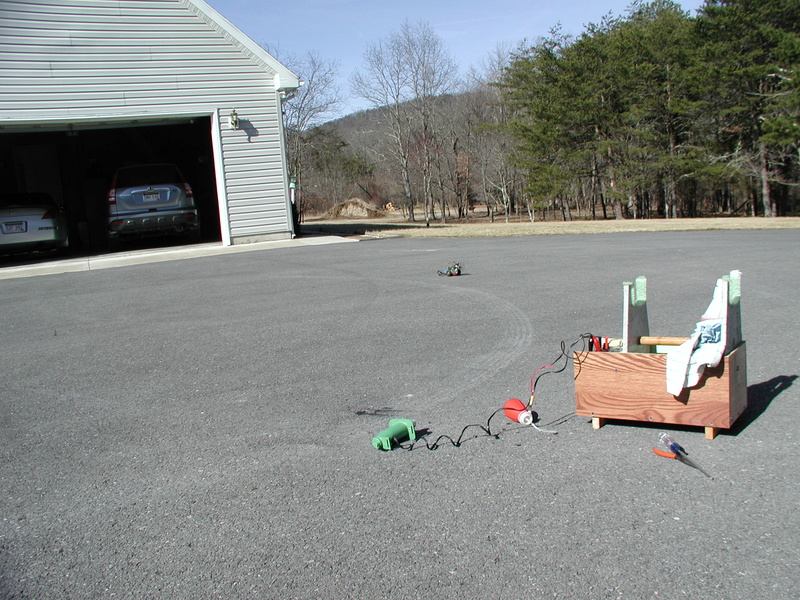 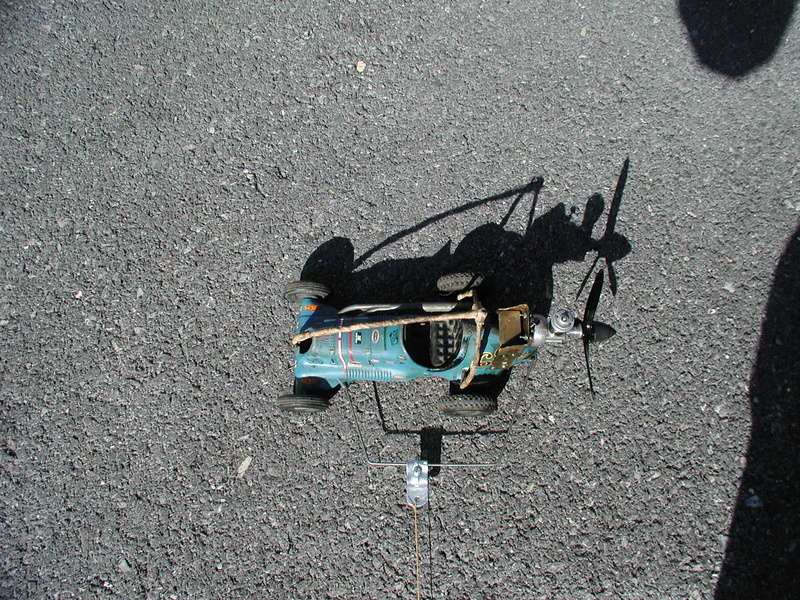 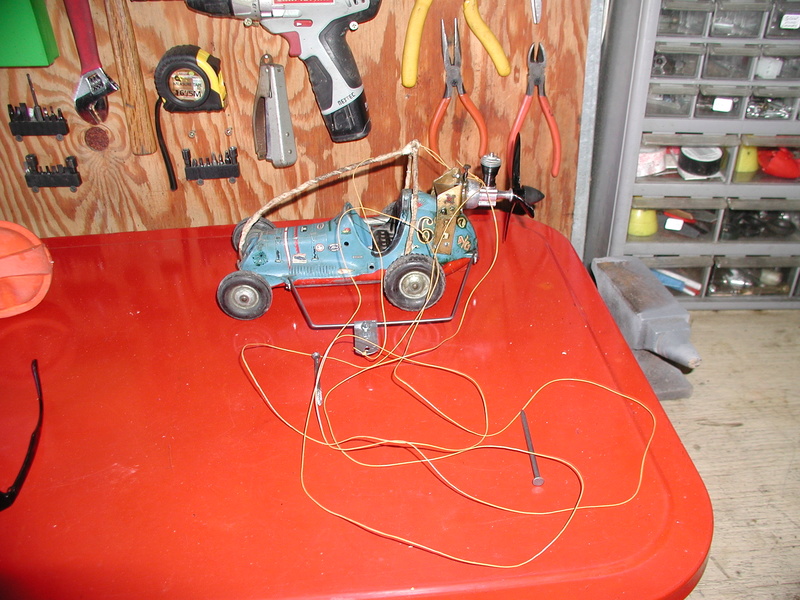 I always grin watching a little boy and his new toy

What separates the men from the boys are the price of their toys.  Got about one thirty in this one....

The miracle was that I found the original tether nail hole in the driveway.  Needle in a haystack with my eyes. Took courage to "catch it with my feet" spread outward at a 45 degree angle with that angry thing fast approaching. Don't miss I told myself. Vulnerable area.