I built this astonishingly beautiful Hangar 9-made ARF (http://www.hangar-9.com/Products/Default.aspx?ProdID=HAN4745) called Denight 50  a few years ago, and powered it with an OSMAX-FS56 4-stroker, then flew it until the flying field of proper space became unaccessible. 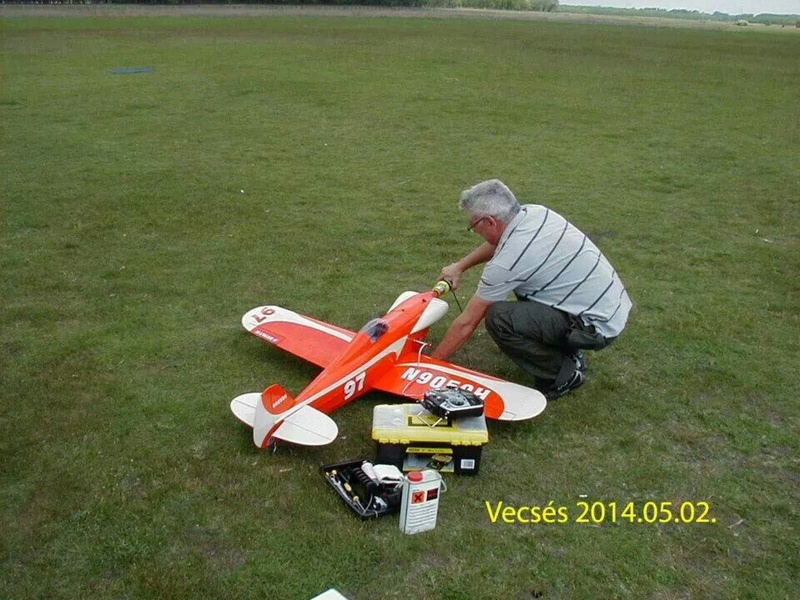 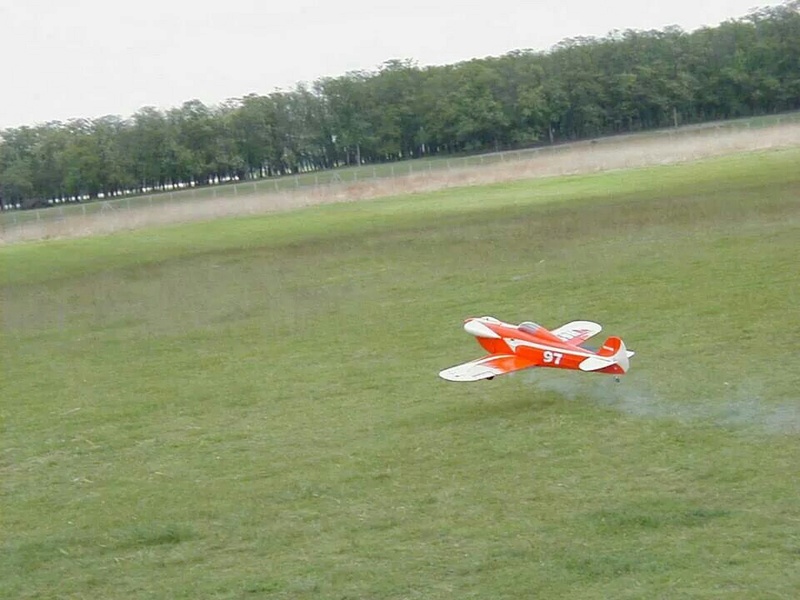 Note that my ole lady is also happily  "having wings" like a lark when she is with me in the field!!! 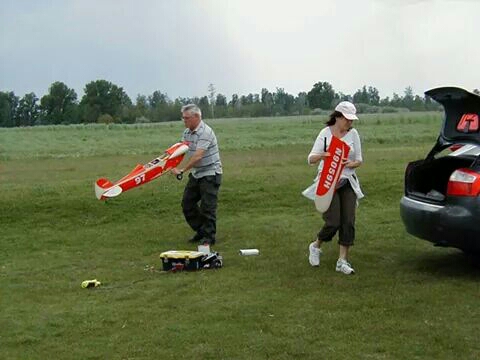 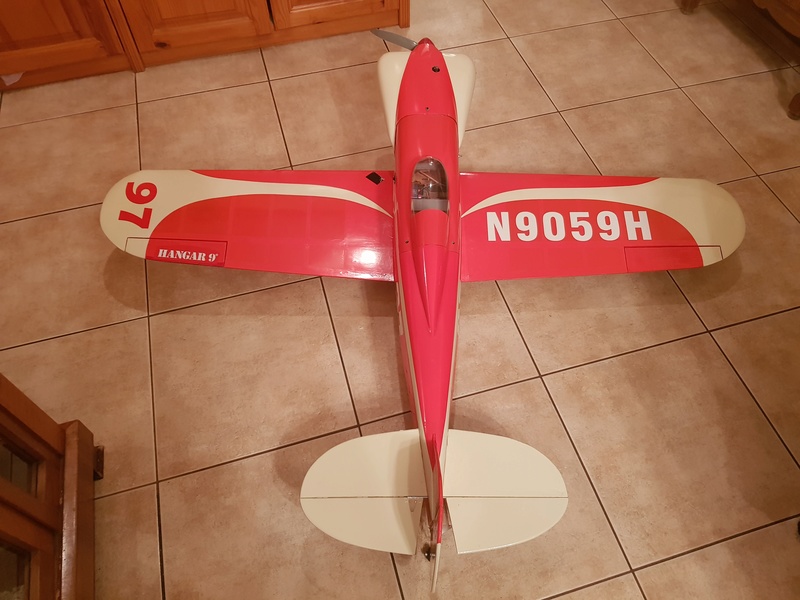 Since then the plane has been just sitting on the top of a cupboard collecting dust with sorrow, and with a slightly damaged but still functional engine cowl that is no longer on stock with Hangar 9.

Ultimately I found a cowl on the internet, the last sold by a small hobbyshop in Poland - so small the owners do not even speak English and I had to rely on one of my co-workers born in Poland, - and bought it, then retrofitted the plane's nose this last weekend.

I also cleaned and restarted the OS MAX FS 56 engine that just works like a clockwork and idles so low as the small Honda MSX 125motorcycle I ride in the summer...unbelievable how such a small 9,5ccm 4-stroke engine replicates the sound, idle, and stable run of the "large" 125ccm brother.

Watch that the rpm measured with the Hobbico device and with the RPM gauge acoustic app on my phone fall within a 1% wide range i.e. the acoustic app is relatively accurate.

Now that I have made the Denight 50  airworthy again, I am just sitting with my chin dropped in my hand and wondering where on earth I will fly it again? (Small country, limited opportunities....)

"Astonishingly beautiful" is right Andras. What a nice looking aircraft.

I'm sure that four stroke sounds beautiful too, but I couldn't get your video to play.

Thanks Bob, that is just a screenshot from my phone while running the vid...I will post the vid on youtube and make that accessible here as well.

The plane would in principle require a minimum .72 size 4-stroker, but this .56 OSMAX FS hauls it in the air so easily....

I remember this airplane it is beautiful and a shame for it to set without getting the air time it wants , is there no farmland around you that a friendly farmer may would let you put ur up?

Yes Eric I agree...not too many farmlands in my area in the outskirts of Budapest where I would get access...the field I shot those pics in 2014 are about 15 miles from my home and are difficult to access because the road leading there is a dirtroad almost always flooded, good for tractors to drive on but even an SUV would find it hard to ride there.

Such a plane needs at least a field a mile wide in both directions to allow you to do the aerobatics without the risk of hitting a tree or flying over fields where you are unwanted with the noisy bird...

Even for my COX size RC planes a field of at least 700m-s or half a mile is needed ...I am so envious when seeing vids and pics of you guys flying in the US with much more free space than here..I am seriously considering to move to the countryside into a new house when I retire to fly freely taking off from my backyard like I guess Kim does...

I'm sure that four stroke sounds beautiful too, but I couldn't get your video to play.

Here it comes, Bob..sorry for the hectic camera movements, but I was handling the engine, the throttle on the radio, the Hobbico tach and the phone with the camera with no helper i.e. alone, while also keeping the plane in place...not a typical engine running setup that official, OSHA-consciuos model clubs would appreciate

Initially the Hobbico tach was mistakenly set for 3 blades while I had a 2-blade prop on the engine, so the true rpm was the 10500 or so rpm measured later in the vid...at this rpm the engine shaft power is around 1 HP..

The vibrations are caused by the aluminum spar tube that I left stuck in the fuse, without this tube the engine run is just so beautifully smooth...

Nice !! Vurrrrrmmmmmmmmm love the close up sound ! I have a OS 46 4 stroker up stares i have never ran i think it's new to , what fuel are you using ? Thanks man that was good sound !

Beautiful as the other guys said, Andras! I really hope you can find a good site in the meantime, and acquire a country home for your retirement.

Wish there was some way for our international members to visit with their airplanes.

Hoping you get some good flying soon.

Nice ARF design, good choice to fly, hope you find a spot to enjoy it!

So what size prop with that rpm? Without the prop size rpm means very little to us folks looking on.
I have the OS 56 Alpha 4 Stroke it is indeed a good engine making a boost in HP/ power over the older type four strokes.


Here are my engine specs from use:

Thanks Eric the fuel is my home blend 60/20/20 I use in my COX engines meaning all the same rhe nitro and castor is a bit too much for the OS that I remember the Manual recommends to be fed with 15% nitro and the 20% oil only partially including castor.
As a result the goo from the OS is black mud as part of the castor burns at the combustion temperature that due to the higher compression ratio than in 2stroker COX and more nitro than required is probably higher than in COX TD with high comp head that already gets dark brown in castor when I rev it up real tough

Brad the prop is an 12x7 APC as I recall but will confirm once I am at home from work.

Kim wrote:Beautiful as the other guys said, Andras!  I really hope you can find a good site in the meantime, and acquire a country home for your retirement.

Wish there was some way for our international members to visit with their airplanes.

Hoping you get some good flying soon.

Thanks Kim chances are I will be in Tucson AZ then in South Carolina and Chicago from mid next week till middle of the week after, traveling on business but the Denight is way larger than the cabin size suitcase I will have with me!!!

Jokes aside I also often fantasize meeting you guys with our best gears showing to each other and flying the heck together..at least ya have the US events that you can drive to and meet up..

Thanks for including that video Andras, it brought a smile to my face.

balogh wrote:Brad the prop is an 12x7 APC as I recall but will confirm once I am at home from work.

Brad here is that thing the OSMax56FS is swinging..a 12x6 APC 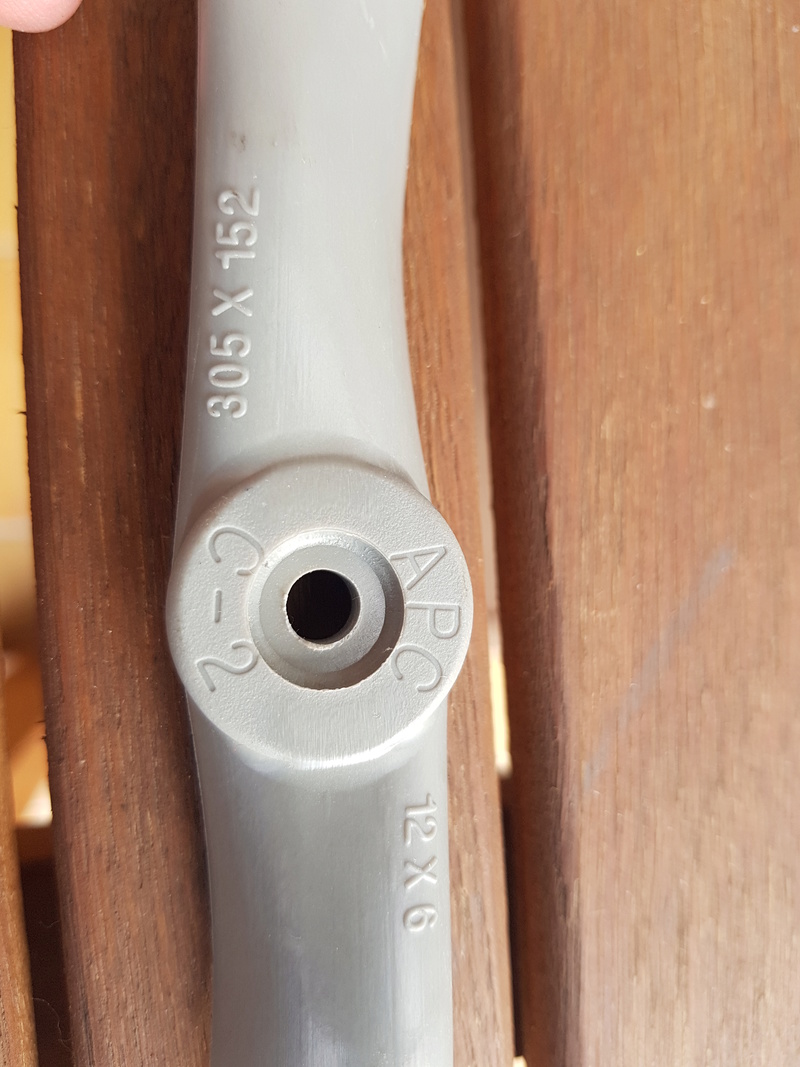 rsv1cox wrote:Thanks for including that video Andras, it brought a smile to my face.

I am happy Bob you liked it..what is appealing to me in these 4strokers is their similarity to real size engines...as much as the dissimilarity and utmost simplicity of COX engines yet the brute power they provide...plus an endless list of miracles you see in them each time they run or just sit around

balogh wrote:...Thanks Kim chances are I will be in Tucson AZ then in South Carolina and Chicago from mid next week till middle of the week....

Andras, if you are driving on I-77 in Columbia, SC you may pass within shouting distance of me. That's also true for the other interstate highways that intersect in Columbia. Do give me a call if circumstances allow. PM sent with phone #.
Rusty
_________________
Don't Panic!
...and never Ever think about how good you are at something...
while you're doing it!

rsv1cox wrote:Thanks for including that video Andras, it brought a smile to my face.

I’ll agree with Bob, that engine does have a sweet sound to it. It is a shame you have lost the field where you could fly it!

Gents,
thank you very much for your feelings of solidarity....I will have to find a place for the Denight 50 to fly somewhere near, otherwise it only collects dust and there is no way I would part with it for a new owner... so I am working on it.

Rusty thanks for the invitatiion. I willl stay in Arizona probably till the end of te week then fly over to East Coast over the weekend. If I have a chance I will call you or even try to meet you which would be great!!!

I have never put an air prop on mine so was curious of the power output.
In the early 90's I had a 6ft plane my own design flying with a OS FP 40 / 1.1hp / 11x7 prop.
7.4lb craft would climb near vertical / knife edge very well. Very similar power
output, but less that beautiful 4 stroke sound. Would have loved to have the .56 back then.
May build a updated version one day the .56 is a real power house of a engine for thrust.
A narrow 13x6N could see 7.2 lbs of thrust with 30% nitro. 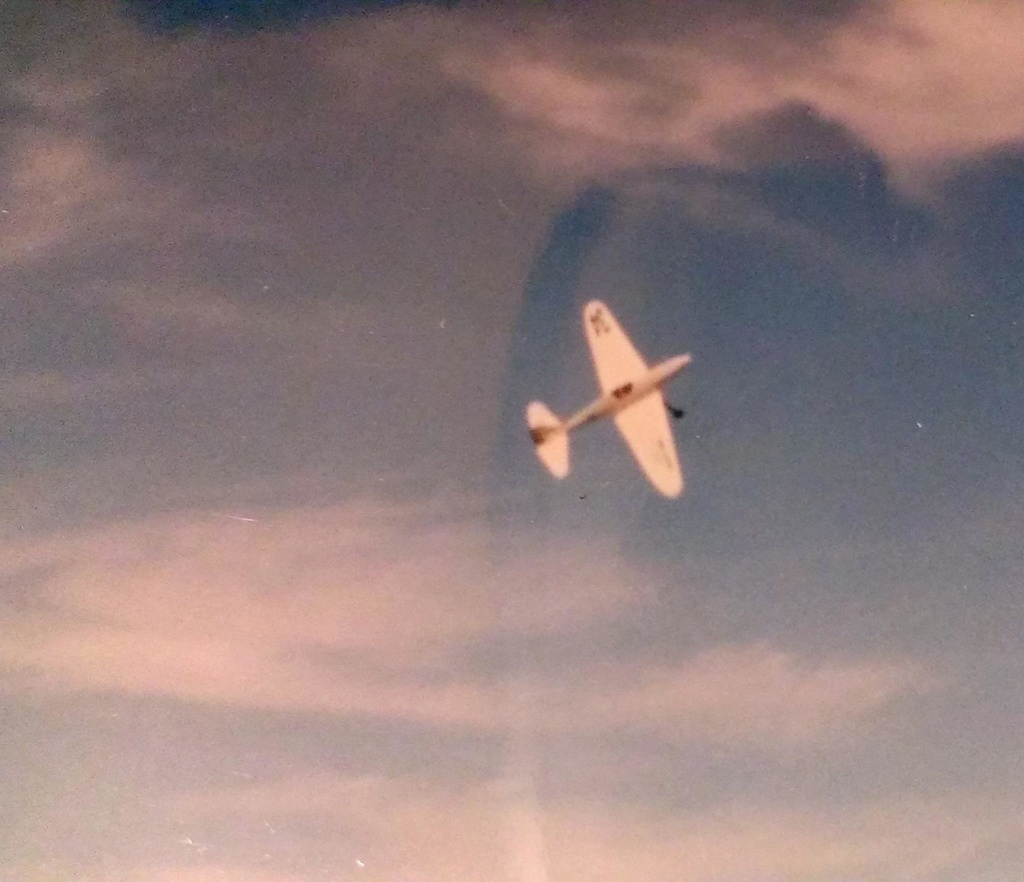 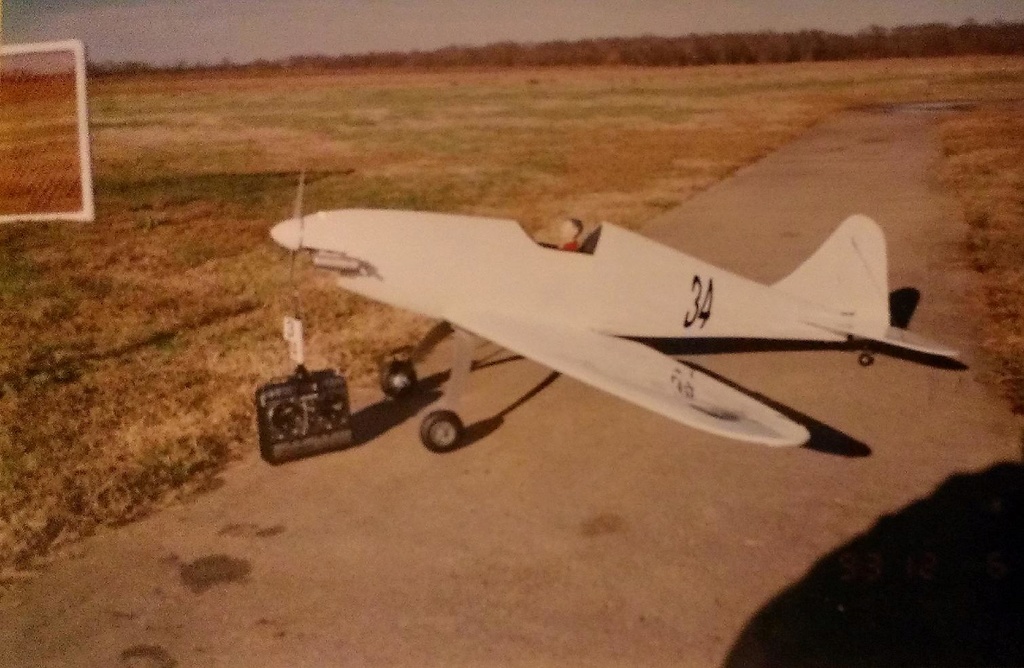 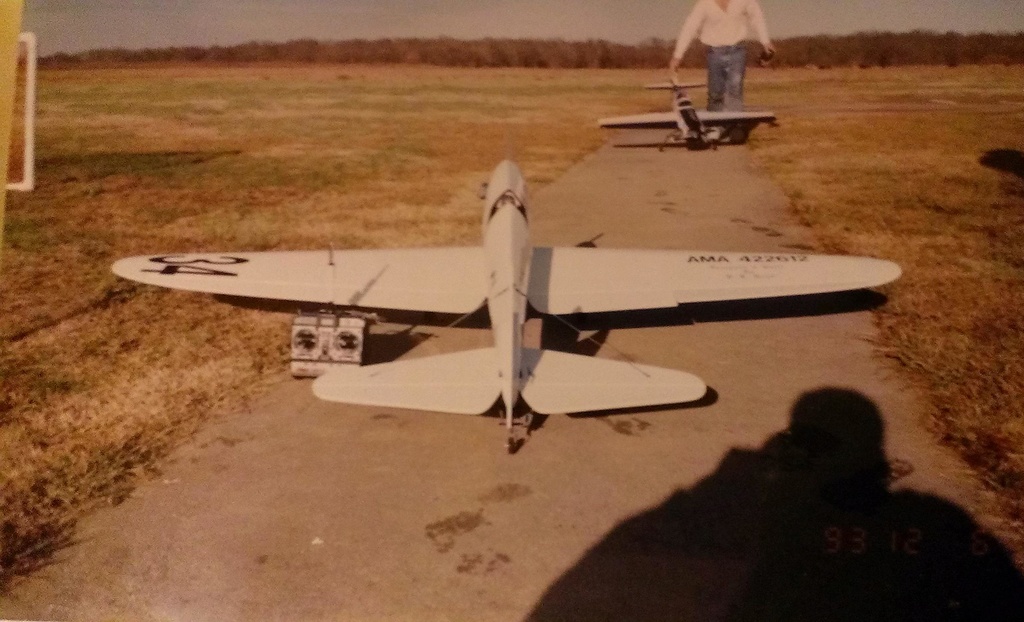 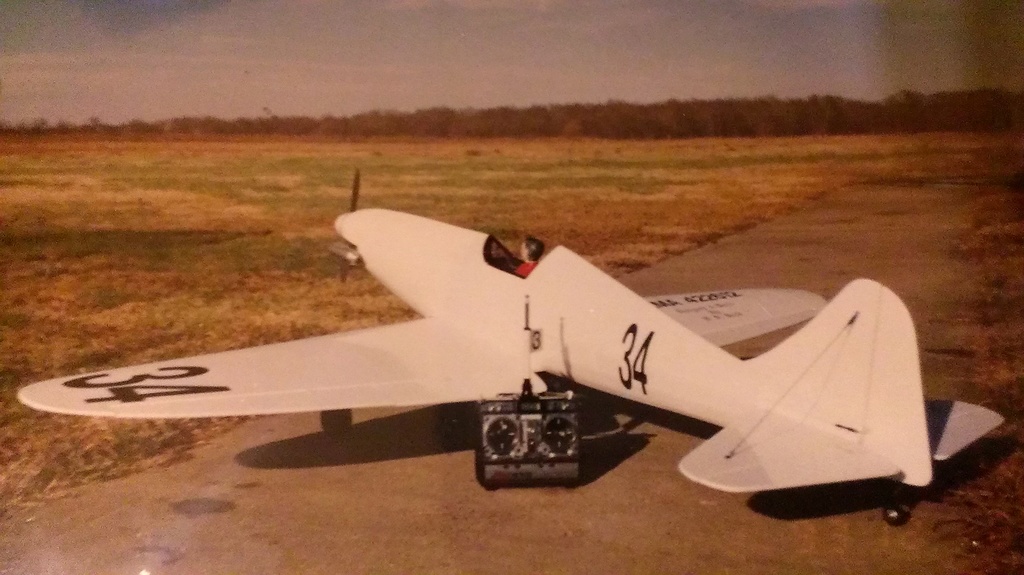 That is a beautiful low-winger that you had back then, Brad. Is that the "Lil Tony"? or another Denight 50 version?

I am happy to see the specs of the OSMAX 56FS state practically the same rpm: 10,5k with a 12x6 prop as I tached actually..

I have this vid on youtube made with a keychain camera fixed to the wing of the Denight...


As seen the engine - that is actually smaller than the smallest recommended 4-stroker for this plane - hauls the plane airborne in only a very few seconds and short acceleration run. But then it loops, spins and does wingovers very easily.

Maybe a bit boringly long vid because what else is shown is the sight from the wing of the plane. The flight ends with a smooth landing, but the plane ultimately stops with its nose down given the relatively heavy engine and the CG being in the front. I always taxied after landing with  elevators fully up, but the smallest pit in the rough terrain will make it stop and fall on the nose. (Viewer discretion is advised for the last seconds of the vid showing my nude self approaching the plane in only a short pant and sneakers)

A video showing the plane in flight is yet to be made, pending the availability of the appropriate and accessible field.

Thank you, I don't build kits or use plans rather was my own design using some full size pencil drawings.
I wanted a big bird plane for flying at my clubs yearly "Big Bird Fly In" The idea was to wow the crowd with
a mere non bearing OS 40FP and do acro with stunt flaps etc right over the run way worked out well. Shocked
many with the seemingly impossible performance, last time I built a kit was in 1991. Yes hope you can find some
good ground to launch the plane from and get some flying vid of your plane something you can enjoy later down the road.