My wife and I had an early dinner this evening, so afterwards I popped over to the hobby shop about a quarter mile away to see if they had some 1/8” lite ply for a couple of projects.  As I was walking from the back of the store to check out, I noticed some boxes on a top shelf for consignment.  Two were Control Line boxes!!! 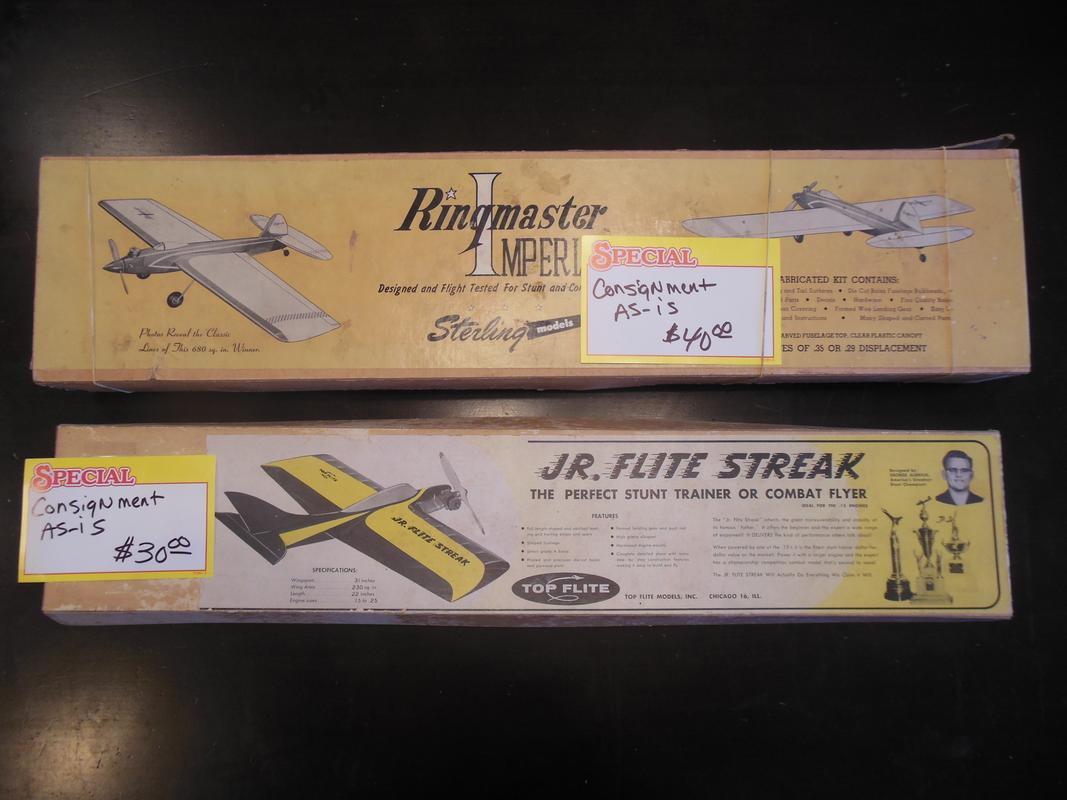 I grabbed them and took them to the counter up front and asked the owner if I could open them up and look at them.  I opened the Flite streak first.  This is what I saw: 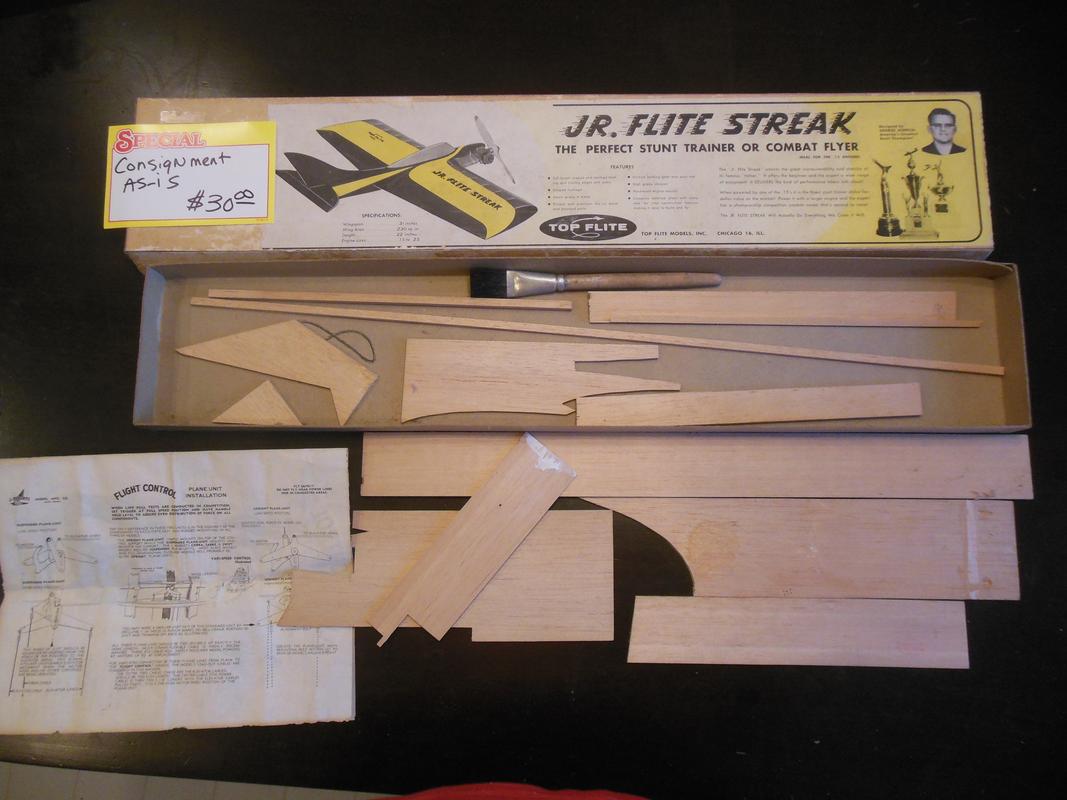 Not a single piece of Flite Streak in the box.  Just some scrap balsa and an instruction sheet for a Roberts 3-Line.  Did not bode well for the Imperial.  Opening it revealed: 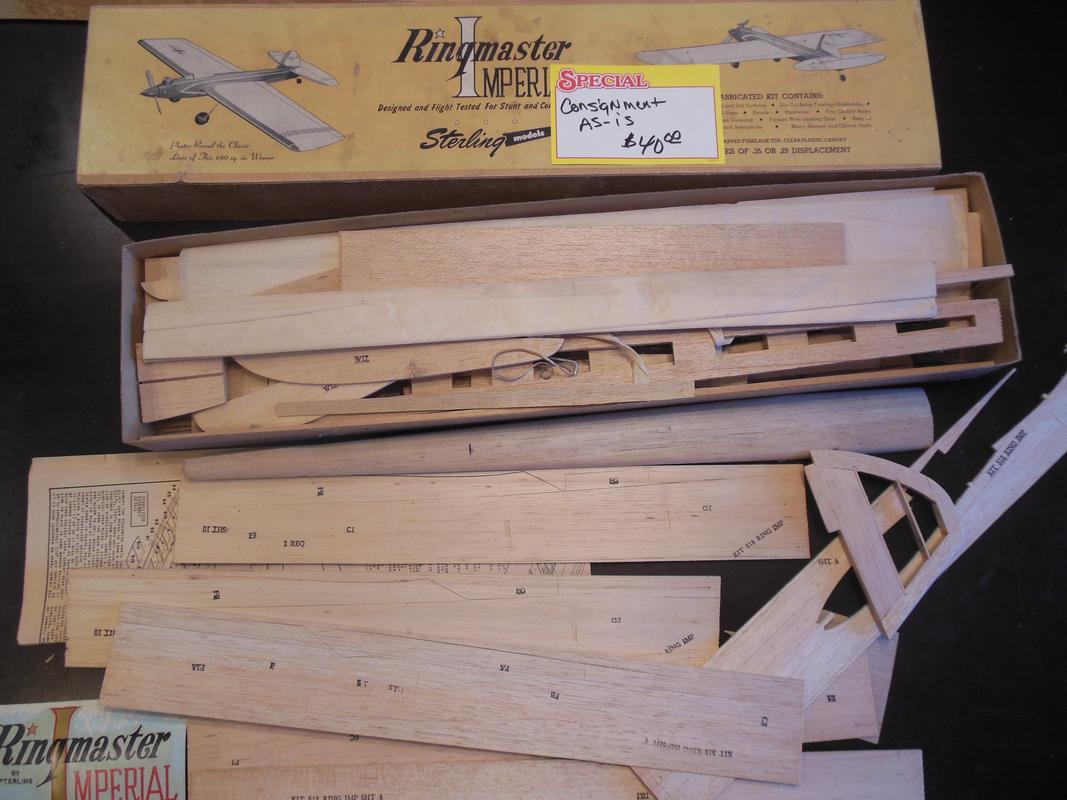 The plans, covering, and decals were there, and a few die cut sheets for the Imperial were there.  A half carved turtledeck, crushed canopy, and a few small pieces were also in the box.  Lots of old, dry, warped balsa sheet in there.

The shop owner apologized for not having looked in the boxes before putting them on the shelf.  He’s a good guy, so I believe him, rather than thinking he knew and would cheat a customer.  After looking at all the stuff, I told him that it’s worth about $5.00 to me for the wood.  He felt bad, so he gave me the stuff for five bucks.

I’ll have to inventory the Imperial against the plans and see how much of the kit is there.  I’m sure I could build it up from the plans by making what it doesn’t have.  That’s if I decided I want to take the time to cut replacement parts and build the Imperial.  I already have too many kits on the shelf and too many planes in progress.  We’ll see.

Had the same experience when buying on ebay a ,,,"non-complete" Cosmic Wind RC kit some time ago. The box only included scrap balsa. Luckily the seller refunded the price.

Not bad for the 5- you got in it but is ashame not what it appeared though . Glad there ain't a Hobby Shop that close to me !!

I got a die cut kit that i am not looking forward to building , new i opened it and look and closed her up