I did a little flying at Triple Tree last Saturday, the 25th. I promised Wayne I wouldn't fly inverted, but after 3 inside loops I reflexively exited inverted. Just a reflex, and I'm glad I didn't wrap Wayne up. I flipped it back upright after 3 laps. I didn't do any overhead maneuvers, just safe stuff. We have some plans to do it more in the upcoming weeks and see how far I can come back. I have another video assortment I'm still editing, so I'll be posting it later this week. You can watch my footwork and tell all is not quite right yet.

It felt good, but not like a competitive pilot yet. This was the Intermediate Death Star or "IDS." I'll tell more about it in my next report too. It's a sweet flying plane. A Cross between a TEOSAWKI and an old Ukey, if anyone remembers that plane, with an LA .46 and a chicken hopper tank on uniflow. 12x4 APC prop.

Stand by for more.
Rusty

How Cool Rusty. Looks like you were feeling it !!!!

Rusty, I'm not one for over the top compliments but you are amazing! You shame me all the way down to my toes.

If I had the courage to stand in one place as you did doing loops and wing overs perhaps that would help me avert the dizzies. But it has been so long since I did any of that it would be a miracle if I pulled it off. We shall see mid September.

Looks like Wayne was giving you added incentive to do well.

Kim wrote:How Cool Rusty.  Looks like you were feeling it !!!!

Haha, yeah, Kim, I was still feeling it this morning too. I've pretty much limbered back up now though. And it really did feel great to quit talking about it and get out there and Just Do It!.

rsv1cox wrote:Rusty, I'm not one for over the top compliments but you are amazing!  You shame me all the way down to my toes.

If I had the courage to stand in one place as you did doing loops and wing overs perhaps that would help me avert the dizzies.  But it has been so long since I did any of that it would be a miracle if I pulled it off.  We shall see mid September.

Bob,
Thanks for the enthusiastic compliments, though I don't know if I quite rate all that. A struggling pilot who finally experiences a well trimmed stunt ship will suddenly realize that it really Is almost as easy as they make it look. If you picked up my handle and worked up to it with a couple of short-tanks, I bet you could do it. It just goes where you point it. See how relaxed I am, no fighting it at all, even though looking at my legs and feet, I'm clearly favoring the left side. The courage will come after you do it. You mention mid-September... what happens then, are you going to a fly-in? Give it a try and I wish you good luck.

By the sound of their commentary, Will and Wayne are as impressed as you are, and Wayne is excited about getting me back out to polish up. Wayne has put C/L down pretty much since I got benched, but now he's all excited about it. I'm happy that they're happy.

I worked a bit more on my video of the other club guys, but still not on the 'Tube yet. Probably tomorrow while my peanuts are boiling. Meanwhile, the plane I flew was the IDS. The Intermediate Death Star. Wayne built it specifically for us to both use to break out of Intermediate a few years ago, but his plans got fouled when he kept getting called on to judge at H'ville. He went ahead and won at Brodak with a Cavalier and hasn't flown again at Huntersville. So now it's time I get a crack at it. I did get booted to Advanced after the 2017 Nall, but I'll be rescinding that if and when I fly PAMPA again, but the IDS will be my go-to plane.

It's a big ship, but only weighs 30ish ounces and has a very happy LA .46. It has a foam TEOSAWKI shaped wing, a Ukey style fuselage and a big stab... very sweet, nice gentle but confident pull, and as I said, it goes right where I point it. In the following picture I'm holding a Ukey and he's holding the IDS. I'd never flown it before Saturday.

"The International Cox PT-19 Fly It If You Got It Day!" Thread Rusty the weekend of September 15/16.

Getting ready to get ready - Bob 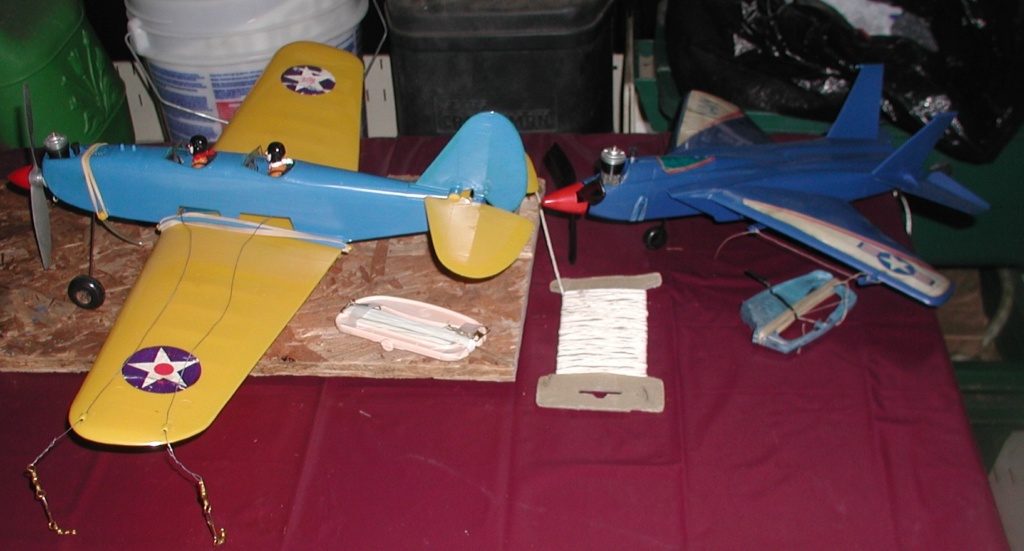 Rusty this is good news man I am happy to hear you got some air time in !! And look pretty darn good doing it . Looked a little a slap stick comic with Wayne at the stick

Keep it up if you can.

I sure didn't see anything that was "not quite right, yet." You were smooth and doing great! I hope you had as much fun flying as I had watching you fly!

It is great to see you back at it!

I see that safety thong hanging out there in the wind, is that like that for a just in case Wayne has to take it? Good to see you flying. Ken

Ken Cook wrote:              I see that safety thong hanging out there in the wind, is that like that for a just in case Wayne has to take it? Good to see you flying. Ken

Yep, that's exactly why. My hand is regaining some muscle control and feeling now, so I figured it was about as safe as having scissors in my pocket.

I woke up some muscles and was sore and hobbled until Thursday. Then with prepping for this weekend's beach trip, and the trip itself, I angered even more muscles and can hardly walk today. But I'm counting on those muscles to stay awake and add up to something useful. When it hurts, I think I'm about to croak any minute. Then when they feel better, I go full tilt and hobble myself again.

I'm pretty sure I could not yet fly a full pattern on a good day, but I'll be finding out. I also need a fully dedicated Pit Man to do the fueling, rigging, walking for me. I cannot get down on my knees and expect to get back up in a freestyle fashion. And all of the above would exhaust me.

Look at me in that picture above, holding the Ukey... that was back when I had a neck. Compare it with recent pics, like in the video. It's more than 2 " shorter now and affecting my balance, coordination, and tactile sensations.

But I'm probably on schedule for a decent walkin' around day Tuesday and will probably spend that day on the Cardinal wing. I may only get as far as retrofitting my table with a new(old) shower-door glass. The bathroom is going to get remodeled this week, starting Tuesday, so that's where the glass door is coming from.

Thanks all of you for your support, and I'll be seeing y'all in these funny pages. And I want to meet our new CEF South Carolina guy too.
Rockin' Rusty
_________________
Don't Panic!
...and never Ever think about how good you are at something...
while you're doing it!

Similar topics
» Flying a pattern at the Triple Tree contest.
» Triple Tree all to ourselves
» I finally pulled it off at Triple Tree
» Twas a beautiful day at Triple Tree - Scores posted and maybe a video coming.
» MCLS 1/2A-Day, 2016 in Huntersville