I haven't been here long enough to figure out the search button so I hope this question has not asked yet.

As a Cox collector which engine is the rarest & how old would it be,??

R Watson wrote:I haven't been here long enough to figure out the search button so I hope this question has not asked yet.

As a Cox collector which engine is the rarest & how old would it be,??

I am not a Cox historian, but the rarest engine I’ve seen is Mudhens EOM winner for last month: a 1960’s TD010 prototype , see picture of Engine of the Month, on left hand side of page. Also, Jason’s avatar is a rare one too IIRC, rear rotary intake. Hopefully he’ll jump in and explain.

One of the most collectable Cox engines is a Strato Bug with its spun aluminum tank from around 56.  It was part of the transition to what would be the Baby Bee. Repros were made so you have to be careful. 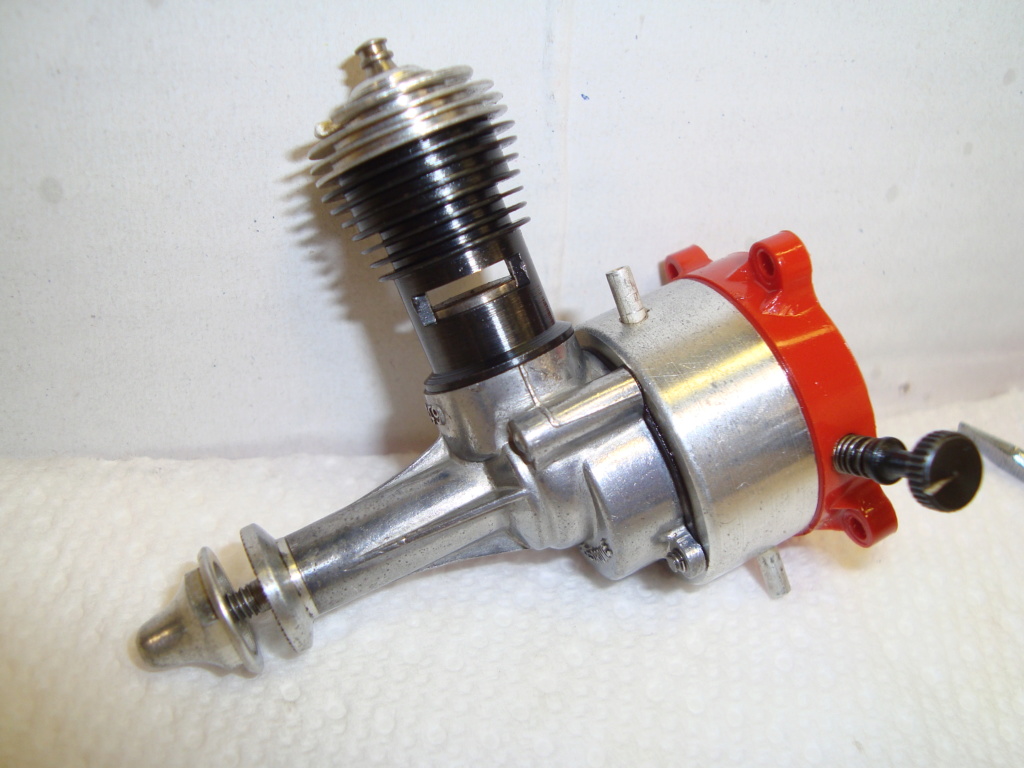 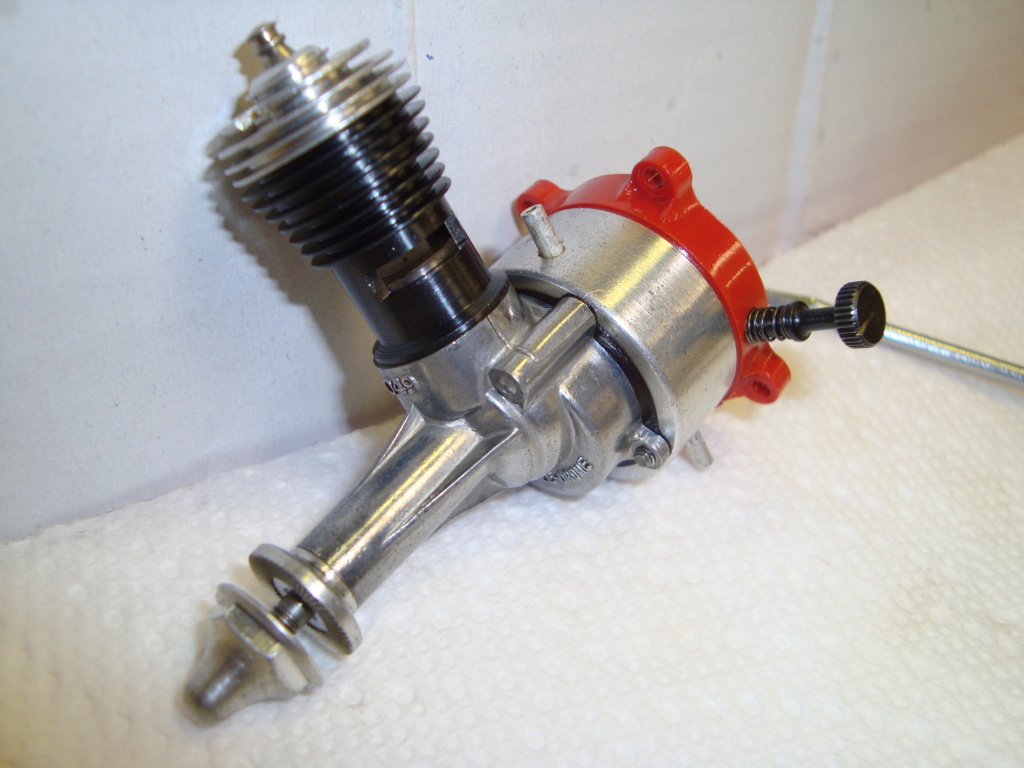 I think this is another rarity.
It is the initial issue RR-1. In this configuration it was only manufactured approximately six months.
From late June 1956 until early January 1957. 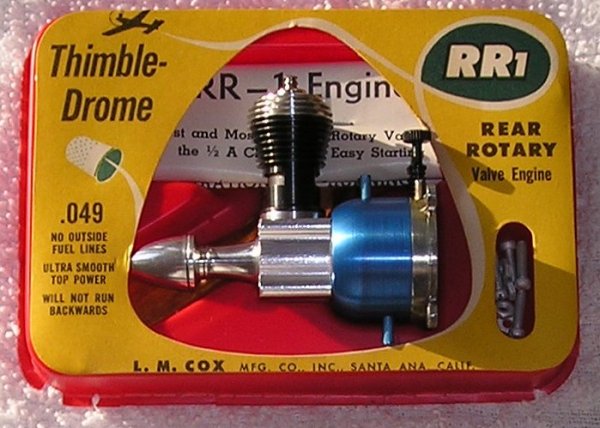 This one is rare:

I suppose there are several types of "rare" engines. For example:

1. Mass produced engines that were produced a long time ago. During the years, a lot of these engines have worn out, flown away or the owner deceased and the kids threw them out. Things like that. Being mass produced, they were not considered valuable when they were new. So, after, say 60 years, a formerly common engine has become somewhat rare. Think of the old O'forty-five powerpacks, Space Bugs etc.

2. Mass produced engines that were altered during the production run. Variants that were produced for a short time before or between alterations may be rare. A good example of this is Mud's RR-1 above. There are also engines like Golden Bees without the gold anodizing, or with black fuel tanks (probably because no correct colour parts available at the moment), but the only way you can be sure they came out of the factory like that is if they are in an unopened package.

3. Engine models that were meant for mass production but soon replaced by the following model, so they were manufactured only for a couple of years max. Like the Strato Bug (replaced by Babe Bee), RR-1 (became sort of redundant after Tee Dees were introduced) or Space Hopper (Production stopped when Tee Dee was introduced).

4. Mass produced engines that did not become commercial successes, or were troublesome due to a production and/or engineering failures or other shortcomings, making the production life short. For example RC Bee (quite soon replaced by the Dragonfly), Queen Bee (not a huge success), Tee Dee .050 R/C (only 2000 made, wonder why?), Venom (only 1000 made, dropped because of piston problems)

5. Limited editions, such as the .051 Medallions, 250-something made, each numbered with its own serial number.

6. Prototypes, "0-series" or special competition engines, of which maybe around 100 or so were made, I think these were not sold, but you had to "know the right people" to acquire them.

7. Factory prototypes, like the Tee Dee .010 I think Mudhen posted for the "engine of the month" a month or two ago. These are typically truly "unique". 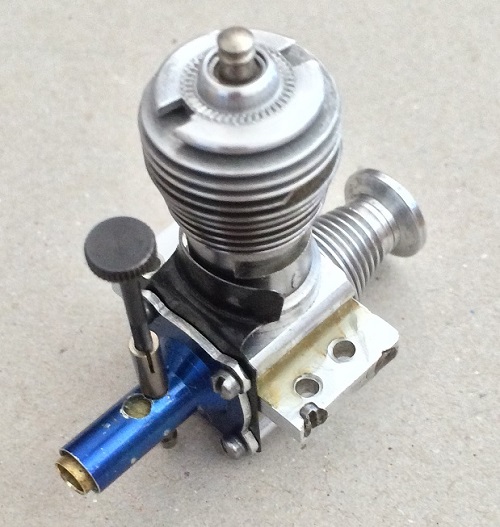 There are plenty of customs and one-offs about, all equally rare, but for them to be valuable they should be made by someone "prominent" in these circles. Mud's engine is special because it was made in the Cox proto shop by Dale Kirn himself. If for example I would do something like that, I would get my butt chewed for destroying a perfectly good RR-1

Other prominent customizers include Ronald Valentine who has made several different rear rotary valve conversions of Babe Bees and other reed engines.

9. Current "collectible" engines. Occasionally a "limited edition" of new engines becomes available, typically made of parts that are currently available, but with special anodizing on the aluminum parts, sometimes with a serial number engraved.

10. Last but not least, any 20+ year old engine that is unused in an unopened package is somewhat of a rarity.

So just pick your poison

For me the hobby is about the joy of finding and tinkering, instead of "bidding high" on ebay, so I mostly play around with used engines that I restore and polish. Maybe even run them sometimes. I am not much of a pilot so I don't fly the collection examples. And I do have some NIB engines too, but they are in a box somewhere.

A quick reply turned to a bit of an essay, without the actual answer to "which is the rarest engine?", sorry

Not sorry. Enjoying this thread.

RE: A little history please

I have two rather odd Cox engines that appear to be factory experimental pieces.
The first is a Pee Wee .020 Sure Start with I believe to be a Work#2 etched on the white Delrin case. It came out of the Cox engine R&D batch of material that ended here in GA in 2009. I saw a lot of Cox engines sold on Ebay a few years back that upon up close inspection had another one in the pile. It was unmistakable with the orange intake stack and white backplate. I suspect since it was sold out of Colorado, it may have been Work #1.
The other is a very early TD .049 with a brass (non magnetic) cylinder. It came from a retired FF guy from Corona , CA.
When I figure out how to post pics you'll see both..

Who wants a Venom , 1000 made for Mouse racers. I like the Killer Bee also. 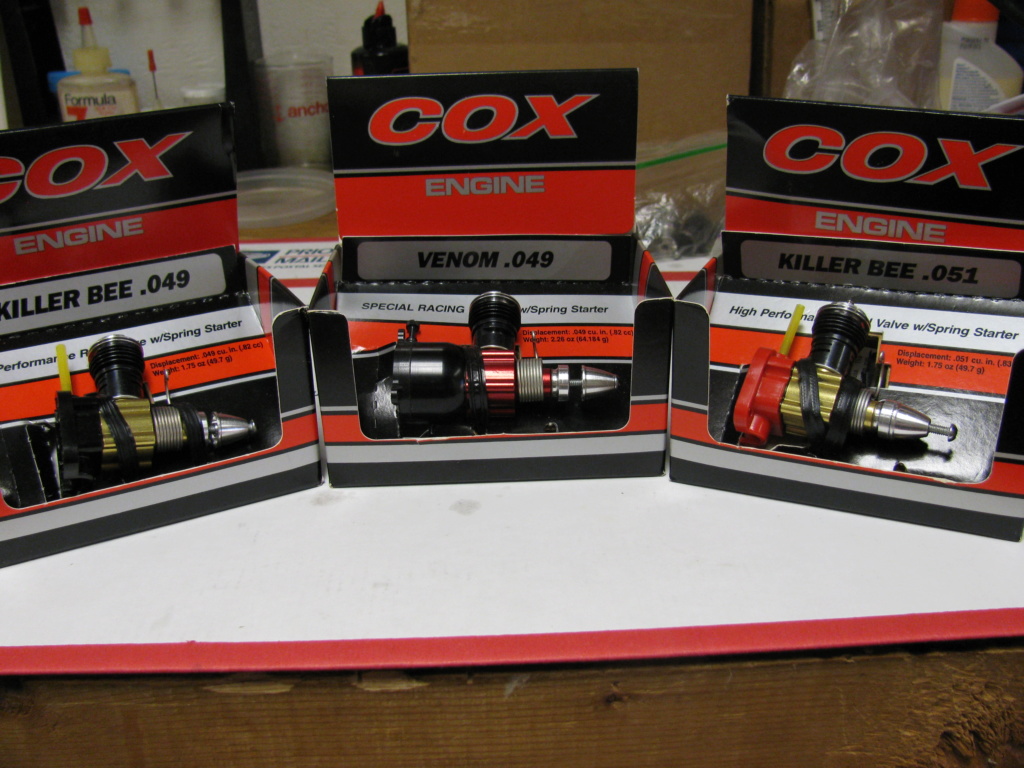 I’ll have one of each please 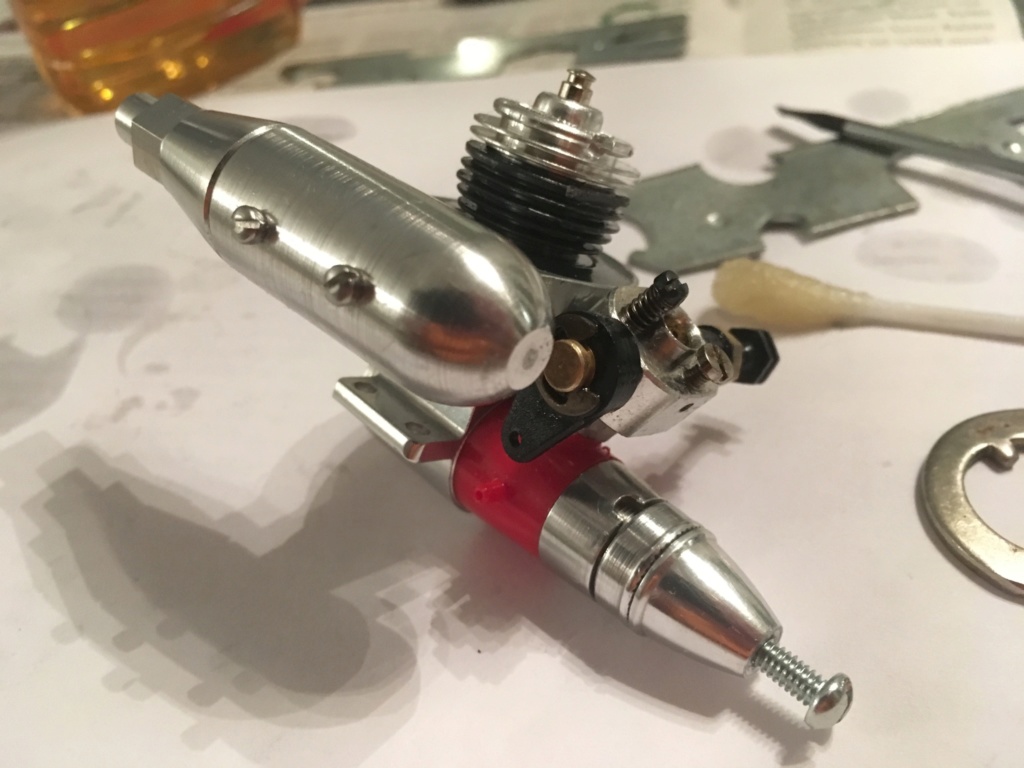 Maybe not the most (or even 3rd) sought after type but made in surprisingly low numbers compared to many other Cox engines.

RE: A little history please

Does anyone have any production data for the Tee Dee .09RC ?
There doesn't ever seem to many of those around either.
I'll bet the CEF resident Cox Factory Man, Mr. Mudhen, would know.....

66 Malibu wrote:Does anyone have any production data for the Tee Dee .09RC ?
There doesn't ever seem to many of those around either.
I'll bet the CEF resident Cox Factory Man, Mr. Mudhen, would know.....


‎Ken Burdick‎ to Cox Model Engine Owners Club
6 mins ·
Maybe the rarest cox engine is this .25 It was designed and proto-typed by Bruce Tungberg when he worked at cox in the 70's. They ran out of money back then. It has the first ever "twisted ports allowing better flow to the ports. The O.S. engines and others use that today. Bruce also has many of the parts for the Cox .36. It was never produced either, but has many advanced ideas in its design. 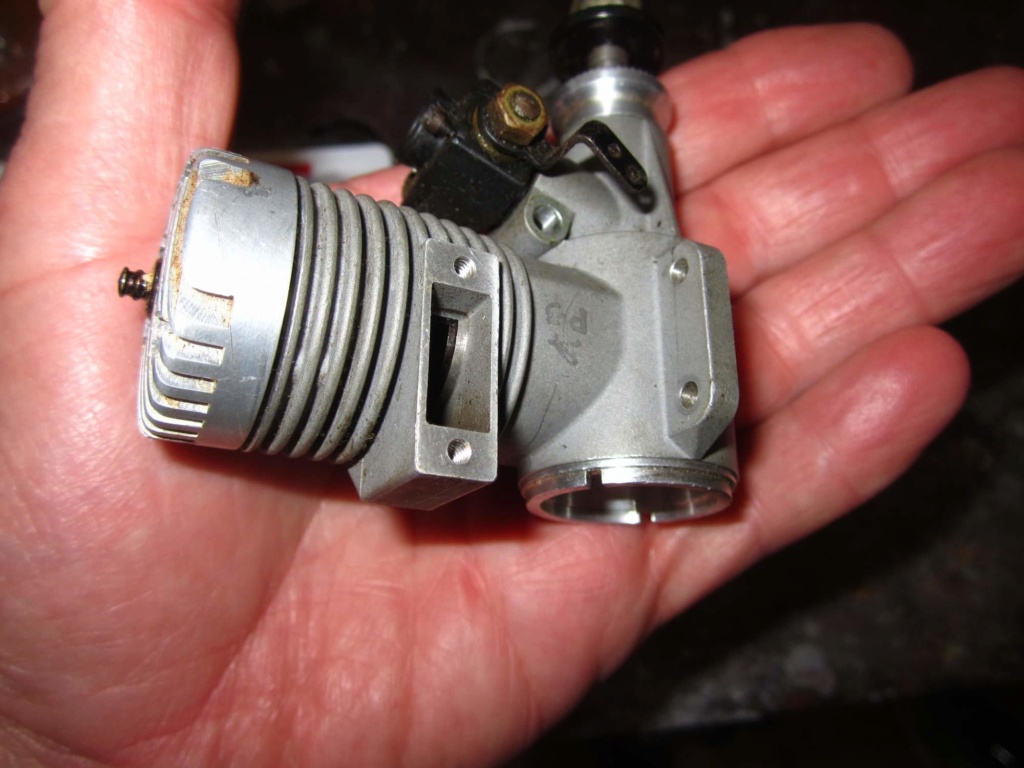 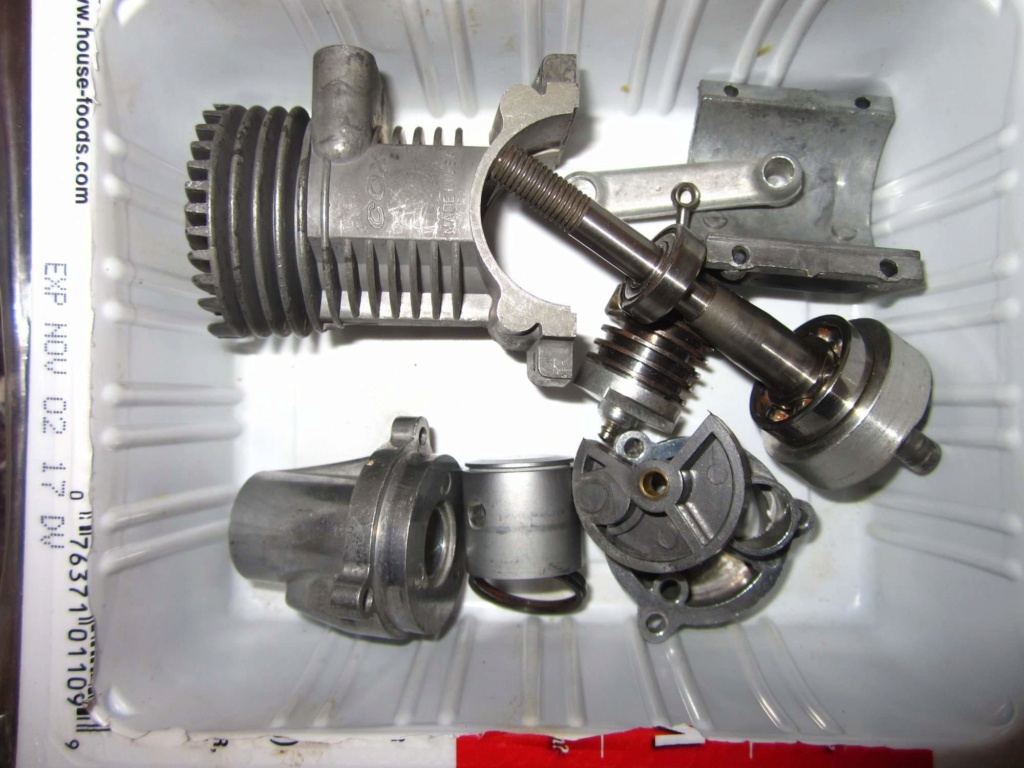 This is a Cox brochure that cam with models, it shows the engines that never were produced 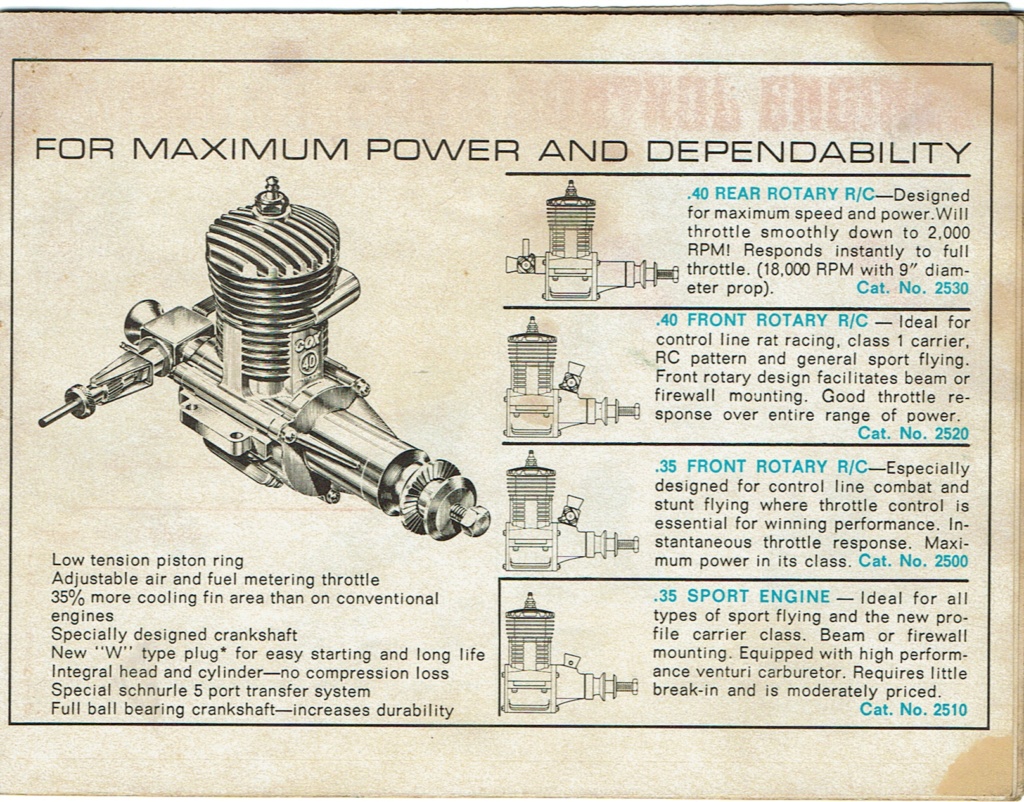 What happened to the intellectual property? Does anyone currently have the prints, etc., for the engines?

Plastic tub bucket photo also has an interesting .049 cox cylinder with another example of the non finned glow head we saw last week

crankbndr wrote:This is a Cox brochure that cam with models, it shows the engines that never were produced

The German Graupner catalog with the 1969 novelties mentioned the 35 and 40 engines too. 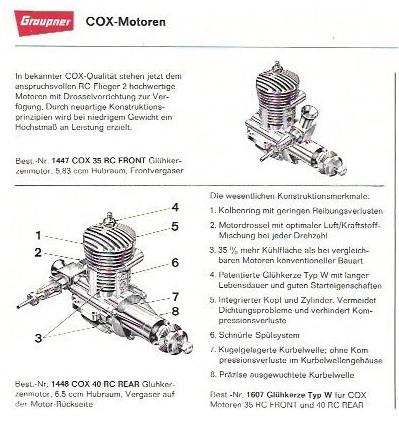 Referring back to Kari's .050, did that engine have a cylinder unique to the .050?  I assume it also is non-SPI due to the muffler?

Dave P. wrote:Referring back to Kari's .050, did that engine have a cylinder unique to the .050?  I assume it also is non-SPI due to the muffler?

Yes, it is a non-SPI, and (AFAIK) the cylinder is unique to this type. The cylinder has a #6 stamped on it. The piston has a groove similar to .051 ones, and I recall reading from somewhere that the actual displacement is .051, with the bore and stroke identical to .051s.

When I cleaned this one up, I took some pics of the parts during assembly but had something wrong with the settings as the pics came out blurry

The above pic is the only good one of the "after" pics.