I always loved that Rare Bear, a proven winner.

Geez... thanks Bob. That airplane has been screaming for the past 4+ years...for another chance to fly. 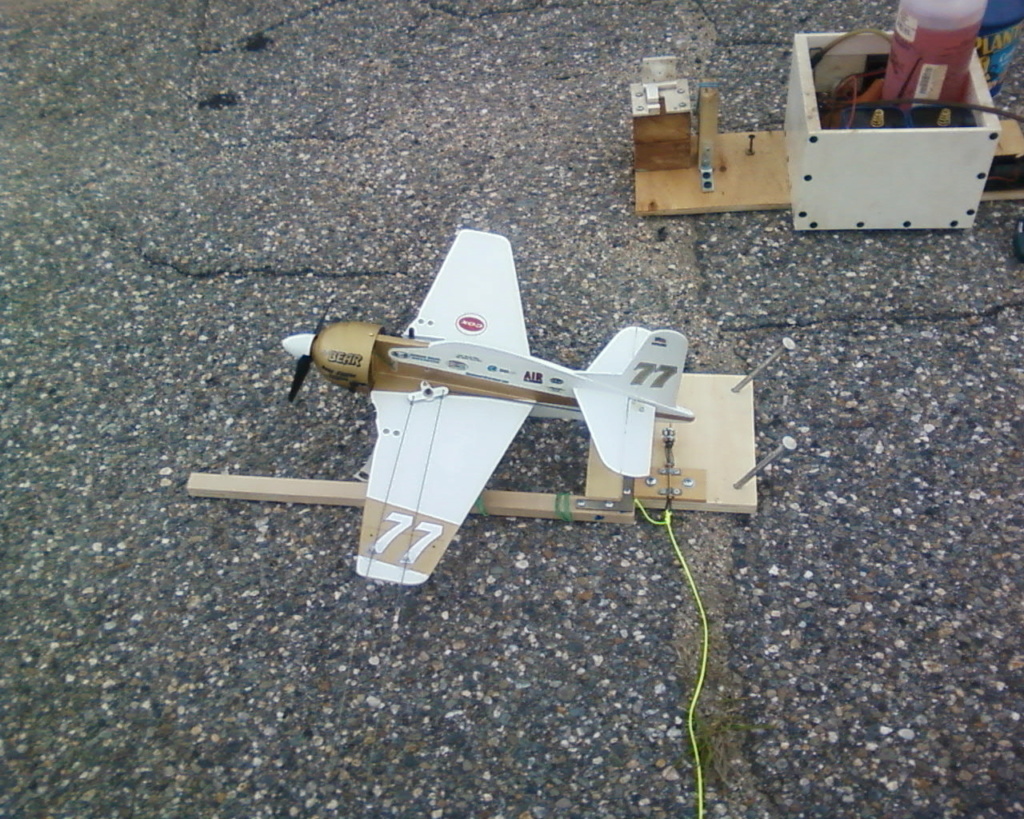 Starting working out "the plan." Tried to post pictures, but the picture hosting service is making me change my PWD. Has something happened recently?

Thank You Levent. It's hard to believe that it has been five years since the 1st CEF Speed Contest. My model; as well as several other contestants models, were given an extension on the deadline for submitting an official flight-video. Some of us needed more time to finish our models.. and some of us needed more time to figure-out how to launch them. R.O.G. models (like mine) had small wheels that needed smooth pavement. This was one strike against me. I was attempting to get a flight in on the last "day or two" of the extension. The pavement where I chose to fly was asphalt.. although "aged" (rough/exposed aggregate) and cracks allowing me to anchor my "stooge"...

The F8F-2 Bearcat is a tail-dragger.. and I experienced repeated "nose-overs" while trying to achieve a launch with a hard-to-start hot-rodded reed-valve engine. My wife "Lynne" was with me. She had formatted the graphics for the "Rare Bear" Reno-Racer variant.. and resized them, until they fit my tiny 16" span model and laser-printed the ads./logos at her employer.. onto 8.5" x 11" clear/matte-finish shipping labels which I had sourced through "Staples"; an office-supply outlet. She gets major kudos for that.. plus being my pit/camera-girl.. even though we failed to get the airplane in the air.

I should have packed a few more essential 1/2-A flight-support tools. A small flat-blade screw-driver was missing from my arsenal..

We weren't far from home.. but it was too late in the afternoon to go back there for toolz..

The repeated nose-overs had cracked and "thrown" the rigid-plastic spinner.. and loosened the hub-nut. By then, the sun was going down and we just packed-up the flight-gear and drove home.

The models' reed-valve engine had been configured with a cloned/Killer-Bee backplate, a cloned Tee Dee .049 cylinder/piston assy. from Cox International.. and a high-compression OEM-style glow-head. The fuel-tank was a custom uniflow tank that I made. The prop was a Cox black 5" X 4". The prop and its' hard-plastic spinner came as stock-equipment on my 1986 Cox Cosmic Wind model. The engine later ran a respectable 19,560 rpm for the CEF tach race three years later in 2017. The airplane however has yet to be flown.

I am currently configuring a different engine for this airplane (the same Cox .049 reed-valve/product-configuration) except a less-wild/easier to start variant. The airframe is already balanced for this configuration.. so it's just a matter of putting-together and bench-testing an engine. The fuel-delivery is undecided. I've had good luck with wedge-tanks.. so that's likely what will be in place for the next flight-tests. We still don't know if this airplane will fly. I'm betting that I have the CG/balance pretty close to where it should be. I guess we'll find out soon enough..

I love the fuel tank, Roddie. It was the inspiration for the two flat ones on my Mosquito!

Thank you for the info. It can be Model of the Month (a new contest will be good).

I always like Reno aircrafts color schemes. This Bearcat scheme is also very good one: 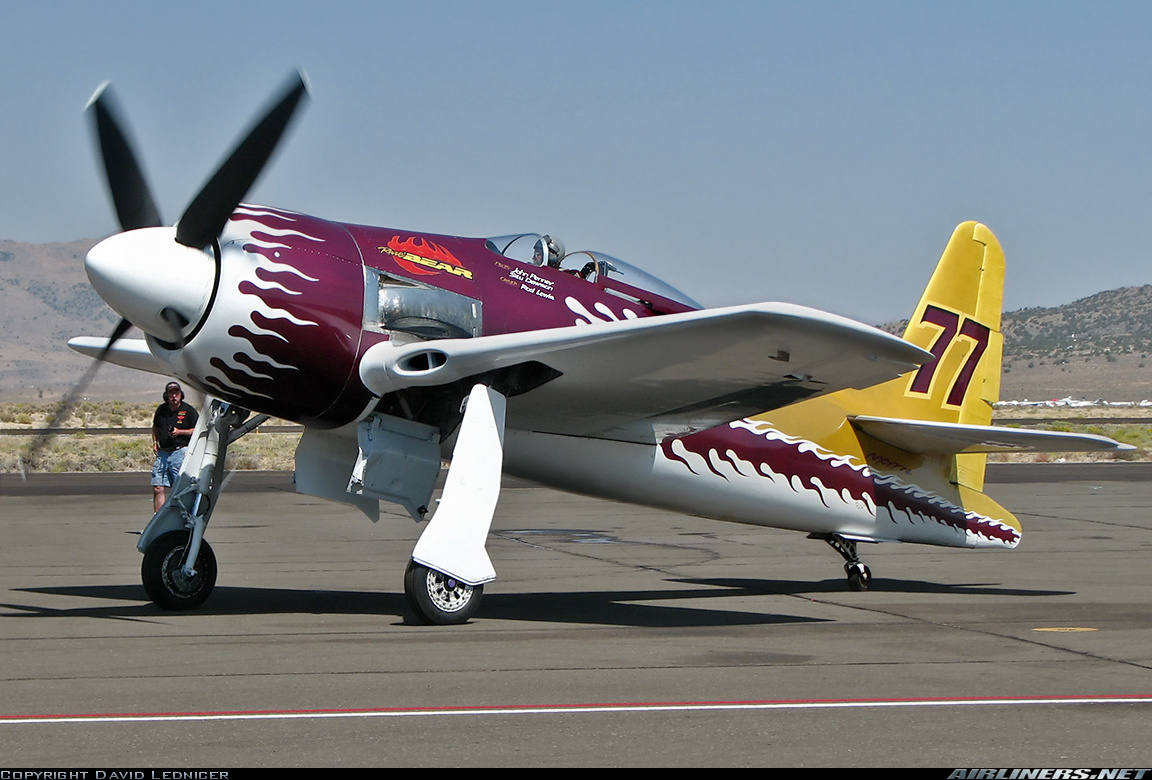 Yes, the F8 Bearcat. Unfortunately I watched Corky Fornof's Dad buy the farm in one at an air show at Quonset Point Rhode Island while Corky was flying a twin Bearcat. Corky circled the wreck for awhile then landed. They stopped the show right there.

I think someone else here has that exact same model too, Kim, Mark maybe.

I would like to build one but feel that I could never do it justice.

Bump!
Juan (Phantom) here you go. The rules are in page one. I stole the title and added that mine is a build thread to keep me motivated without cluttering up this one. I apologize for the confusion.

Well, I got my first flights of the year today.  Figured it may as well be for the contest.  5 laps on 32' lines, .009" dia. at 10.81 seconds.  I think it is 63.35 mph or 101.96 kph. Only used 15% nitro cause the lovely assistant did not want to wait for me to mix it. It was an old trainer/ mouse racer that has not flown since the son first and last flew it about 30 years ago.  I made it really nose heavy, and over the last month or so shortened the nose about 1/2".   I made up a Babe Bee with a # 4 cylinder and prepped it, but no good running with the clip off after taking it apart 3 times.  Put in an old Black Widow for this.  Matches the plane.   Hit the tree first try, and buggered the lines.  Went high right away.  Got video on my Facebook.  Not sure how to transfer it to here?  Nice day to fly, not much wind.  Our field is swampy and won't be open for a couple weeks, so I did this in the back yard. 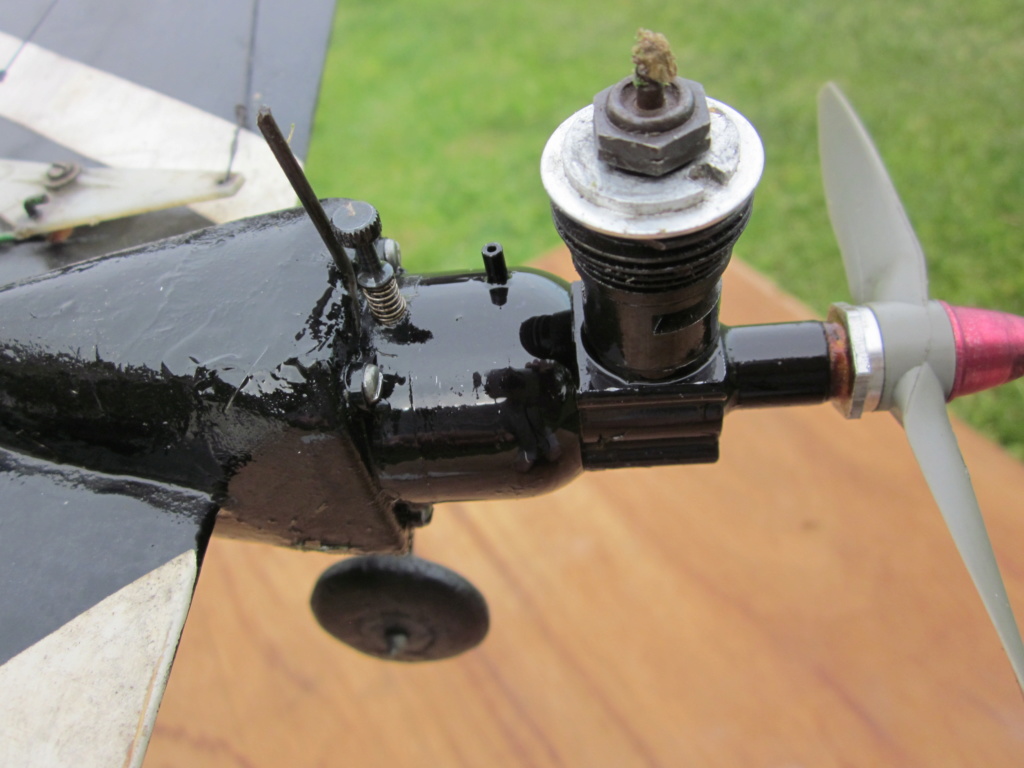 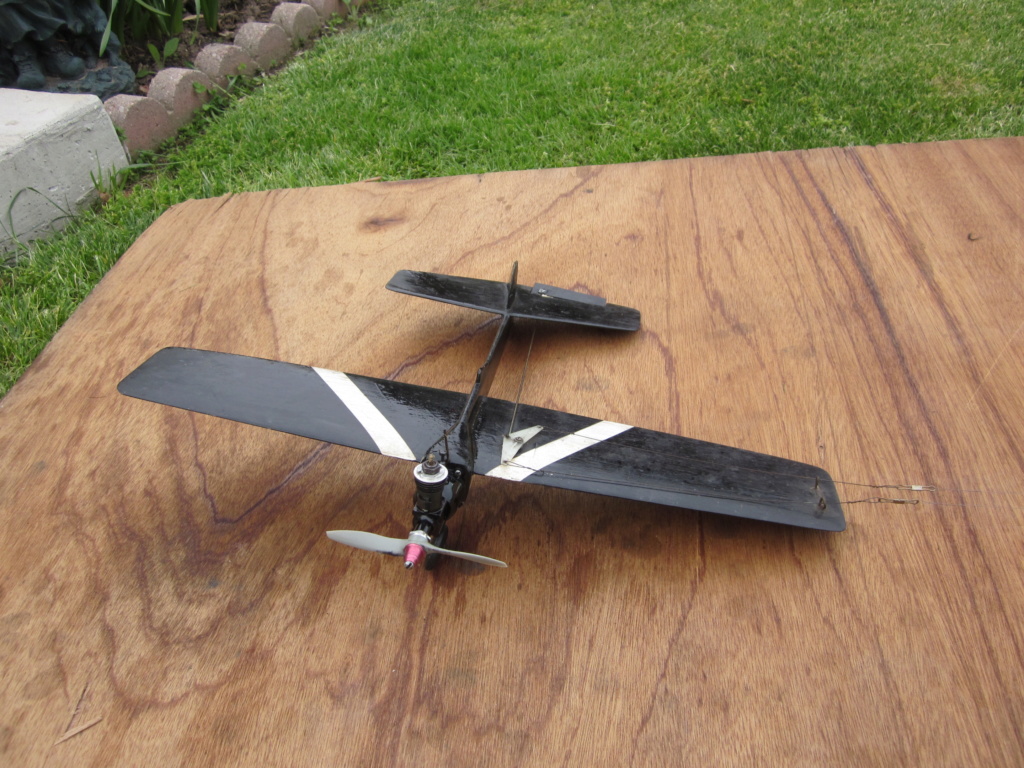 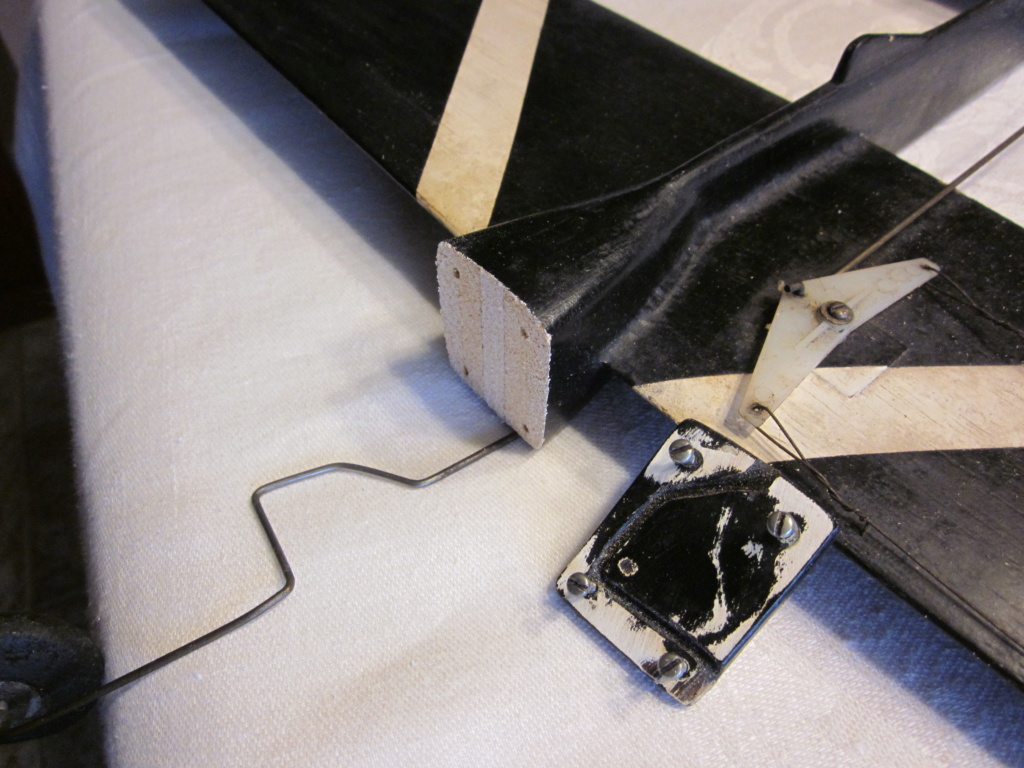 I'll try here.  Copy paste when I am on it.  The first flight was posted twice, and a bit slower with the old yellow Tornado prop.  It was a trainer.  I got the TD motor on now, but will not meet the deadline because the field is too wet, and the tractor can't get on.  Crops are going to be late this year.  Fruit trees may be good.  No frost here even in April I think.  https://www.facebook.com/tatijana.feil/videos/2416190598463477/  hope the world doesn't see me playing. It seems to work ok but isn't highlighted.

Greetings aspeed! I enjoyed your flight! I was able to see it on Facebook just fine.

Is the event closed? I have missed out on so much! This is one I would like to be involved in.
I'll check back, for any responses.
Thanks, GUS.

Gus i am pretty sure you can get in , it was just extended to October / hope ur doing well ! Good flight aspeed you had her nice and level !! That ocean looks really nice man !

I made the plane really nose heavy and put a very small elevator to use as a trainer. It used to oscillate in high wind. Flat and level is really all it can do. I think in a mouse race it would have trouble even passing. On Lake Erie looking at Point Pelee on the left, and Pelee Island on the right. On a clear day you can see Put In Bay Ohio. (Different country) Contemplating a slope glider. It has to stay within 100ft. Kind of a challenge.

GUS contest is extended to 31 July

Ok guys, I am officially taking this over for Fred. Fred still has full authority over the contest I am just stepping in to keep things going. I want to see MAX participation, lets show Fred how much he means to us by pulling through and making a concerted effort. If you have a plane and an engine go out and do some laps. Easy afternoon fun. July will be a busy month for me so please be patient as my time online is limited when I travel.

We love ya Fred! Get better soon.

Just want to say Thank You Ron for standing up and taking on the position ,, Lets fly Boys !!!

Purple Plane Factory throws it's hat into the ring!

Okay... Run What Ya Brung means fly a fast airplane.
Therefore, a good engine, good airframe, and enough laps to qualify, equals: I WIN!
( um, are we "trash talking" in this one? )
I'm generally not a speed freak, but I think this one is an attainable goal. Digging through my balsa supply, I can find enough wood to construct a winning aircraft.
Yay! Here goes! 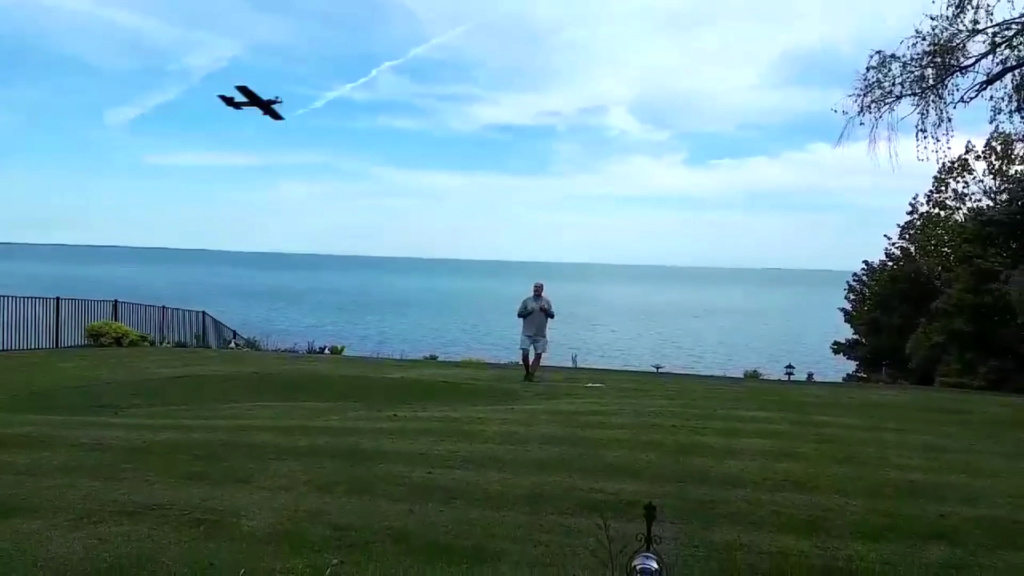 Seems to be a few threads on the "run what you brung" contest. I have a TD on this plane now. I always wanted a direct comparison to the reedy. I will try with a Norvel .049 and/or .06 too if our field dries out. Even the control line field is pretty wet, you can't drive right in yet at either one. Hoping for better days Fred, keep your stick on the ice.

Here are the rough outlines of the plane I am building for the contest. I must make a decision of which engine to run with the contraption. Does anyone recognize a couple of the engines shown? 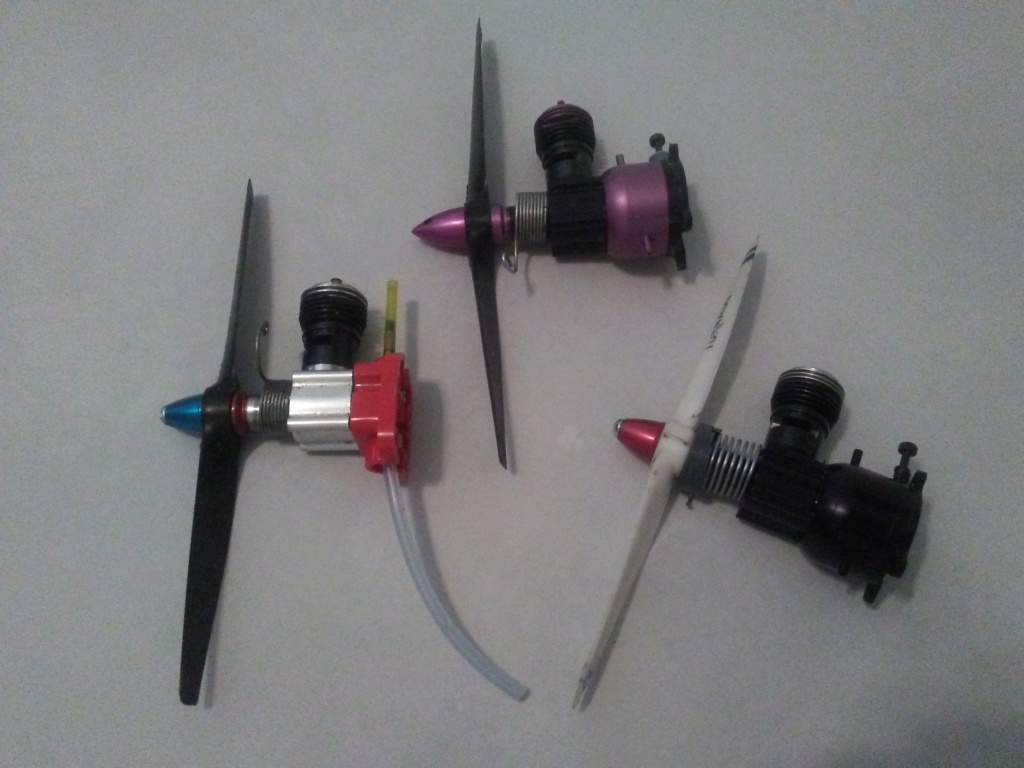 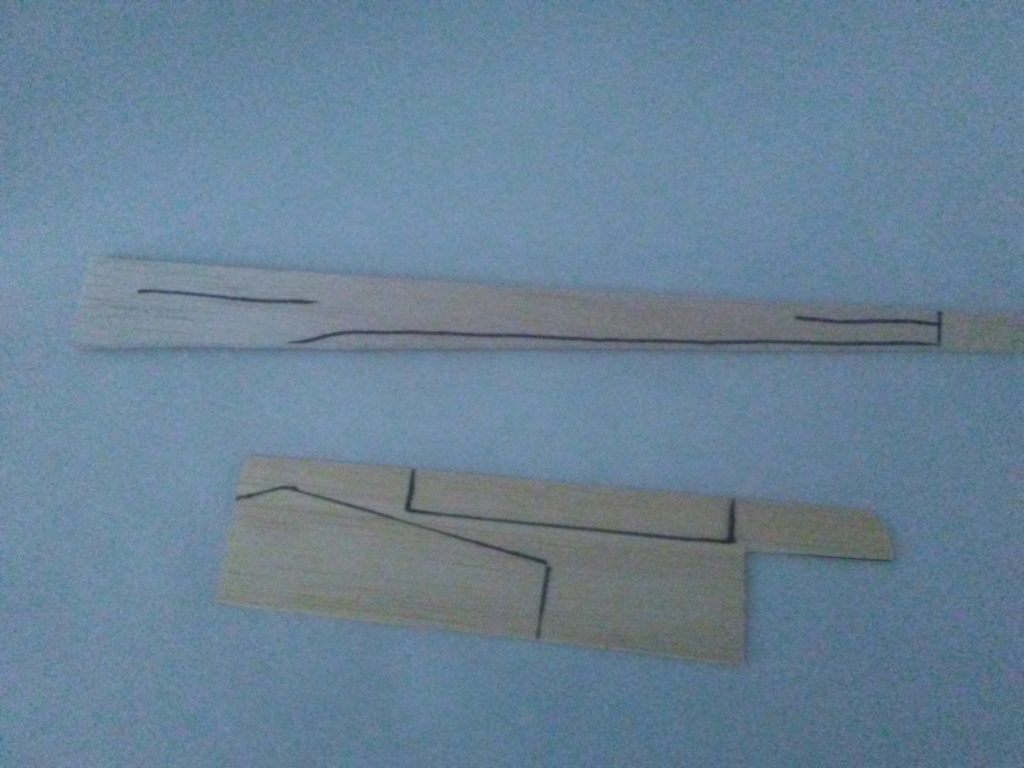 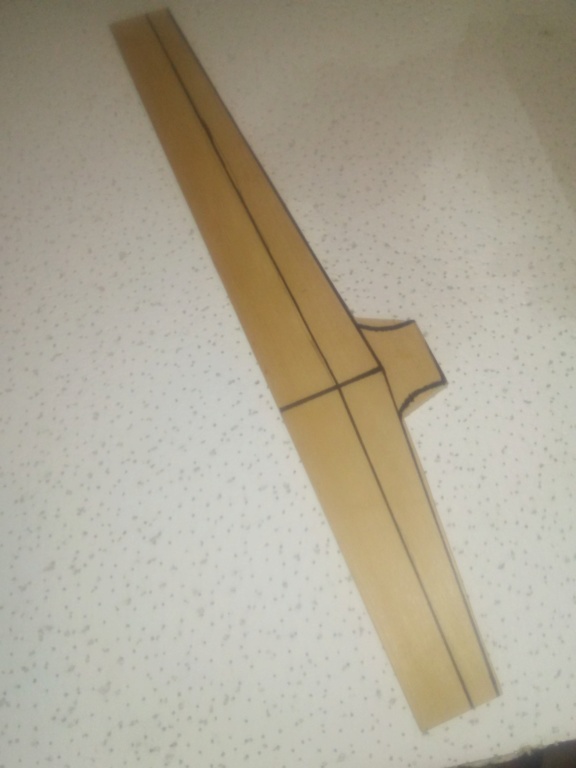 Also, how many laps are required to qualify?

Gus, the Purple one is the one I gave you and it’s the performer out of the three shown.

Rules are on the first page of this thread.

Who remembers their first flight?