» Pitts -Skelton Aerobatic model
by balogh Today at 9:33 am 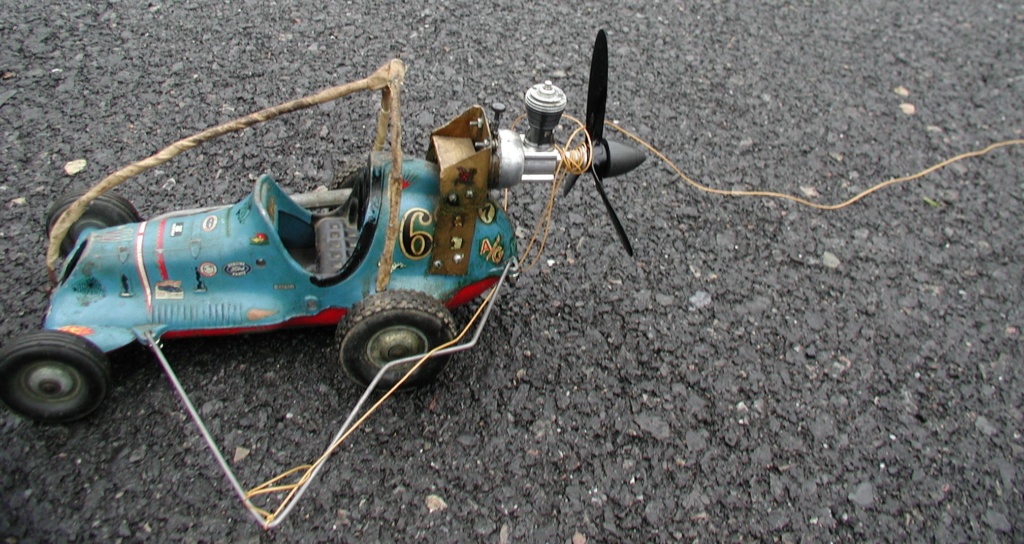 Arrived missing the shift lever, grill, and fire extinguisher.  Surfing ebay I found a fellow selling all those items, either individually or as a set.  I really didn't need the exhaust (or so I thought) and the set was cheaper than buying each piece.

Good quality, reproductions probably.  Just happy to get them. 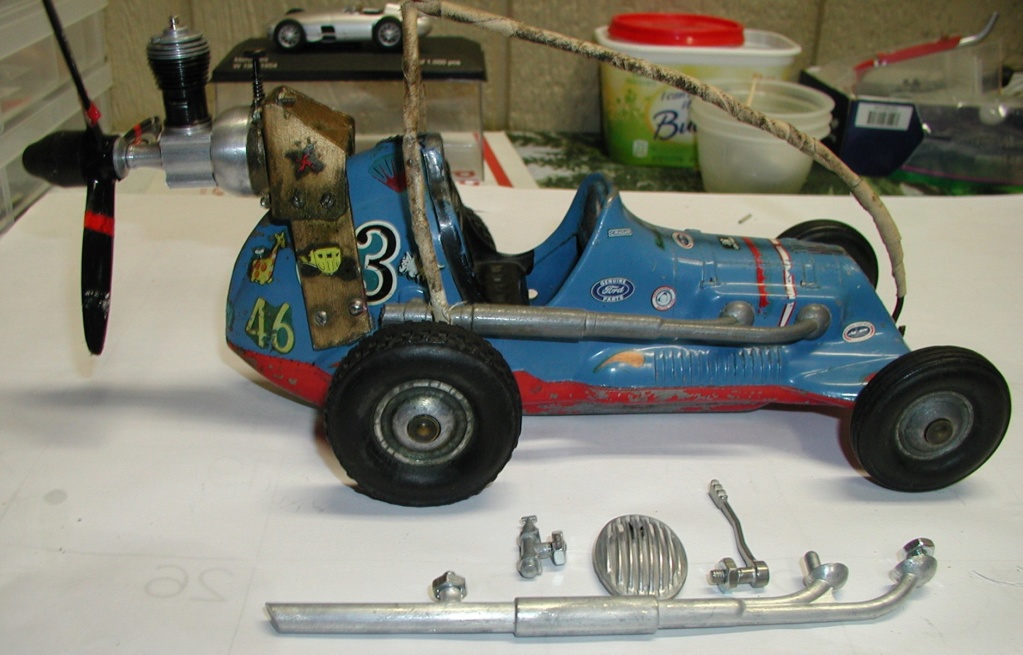 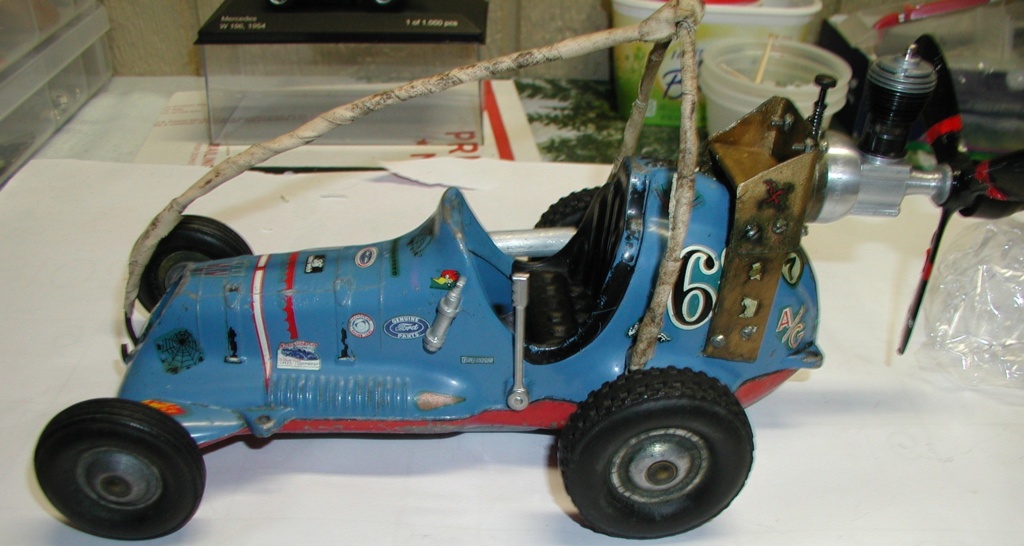 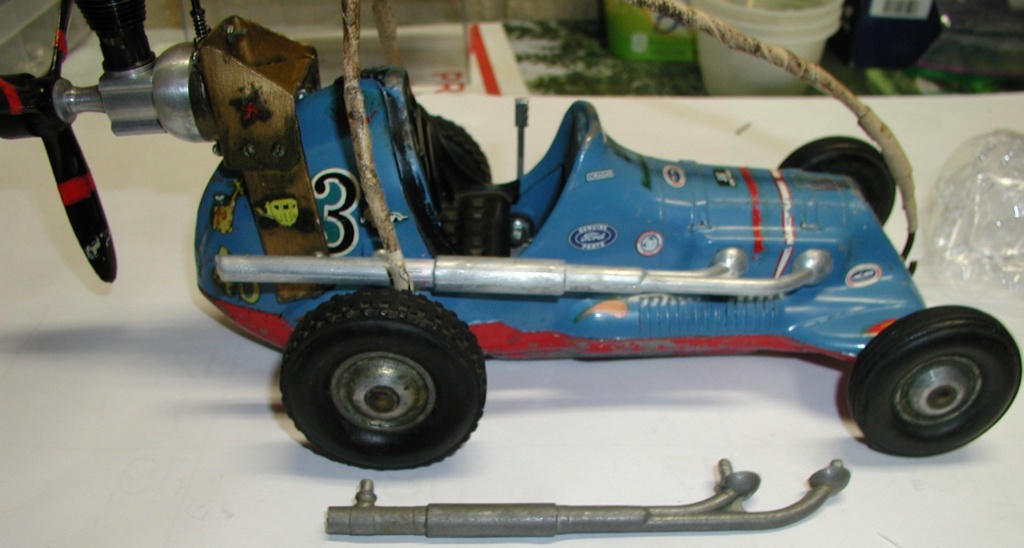 Shafts don't fit the holes in the chassis (too small) and the nuts/threads are metric but they work.  Come to discover that the PO had cut the exhaust pipe, so I needed it anyway.

I would like to use the grill, but to do so I would have to remove the PO added roll cage something I don't want to do.  I may modify the grill to fit. 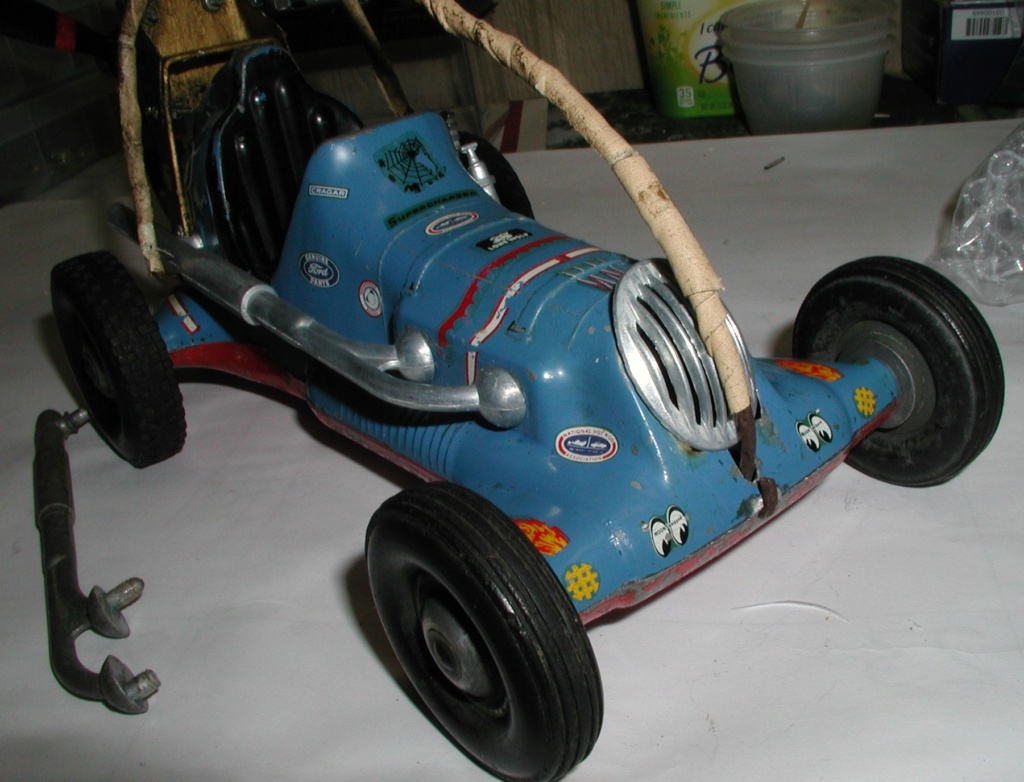 You could upgrade it with the recent Cox .049 Tee Dee bundled with an RC fuselage front E-Bay. Come up with a new pusher pylon that also houses a fuel tank.

You’re too funny Bob. For the life of me I can’t figure out why you want to keep that hideous roll cage and engine pod. The only way to do the grille thing is to cut up the grille. Beauty is in the eye of the beholder! You may need to visit the optometrist

To good Ron U know Bob loves fixing old stuff , and i don't think in his heart he could remove the beauty of the PO s recent fixes

Eric, agreed, with such fine workmanship on his real cars got to admit Ron, Bob has a sense of humour.

In a way it is a quaint reminder of fixes I've done to car and house repairs, undoing what the previous owner did, redoing them in a workman like manner. One motorcycle wiring job I redid looked like it was done by a butcher rather than an auto electrician, very amateurish.

What Bob does with this is of course his business. He may be doing it to give us a reason to "grin and bear".

Thanks guys, I can't say that I have ever enjoyed responses to any of my posts more than these.

I get away with way too much stuff here, bout time I was taken to task.

Yes, I enjoy restoring those old Cox Mercedes to something resembling their former glory, but none were modded by PO's.

If I remove the PO's engine and roll cage on the Roy Cox it's just another Roy Cox Tether car.

Same philosophy with this little devil: 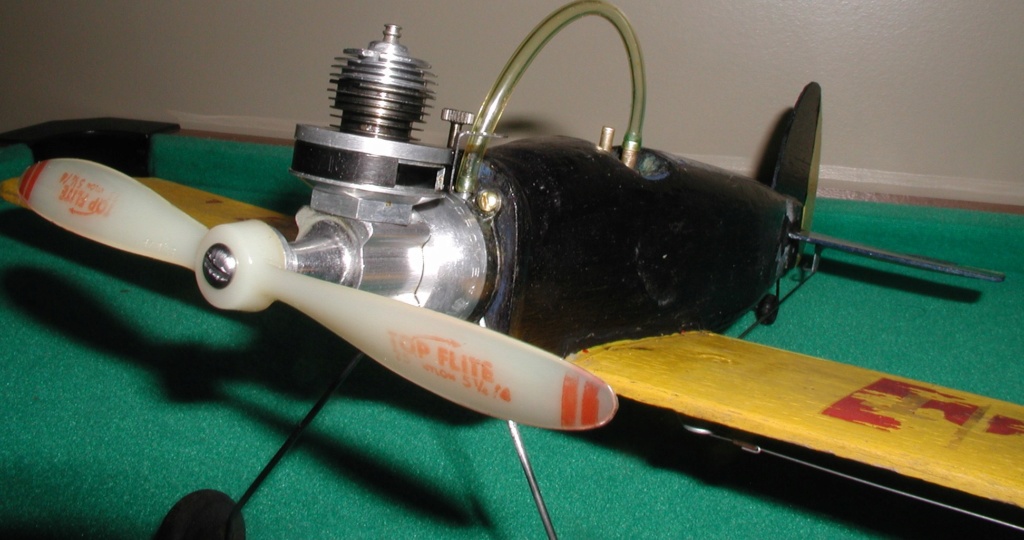 Did I hear something about motorcycle wiring.........I didn't leave this one as found. 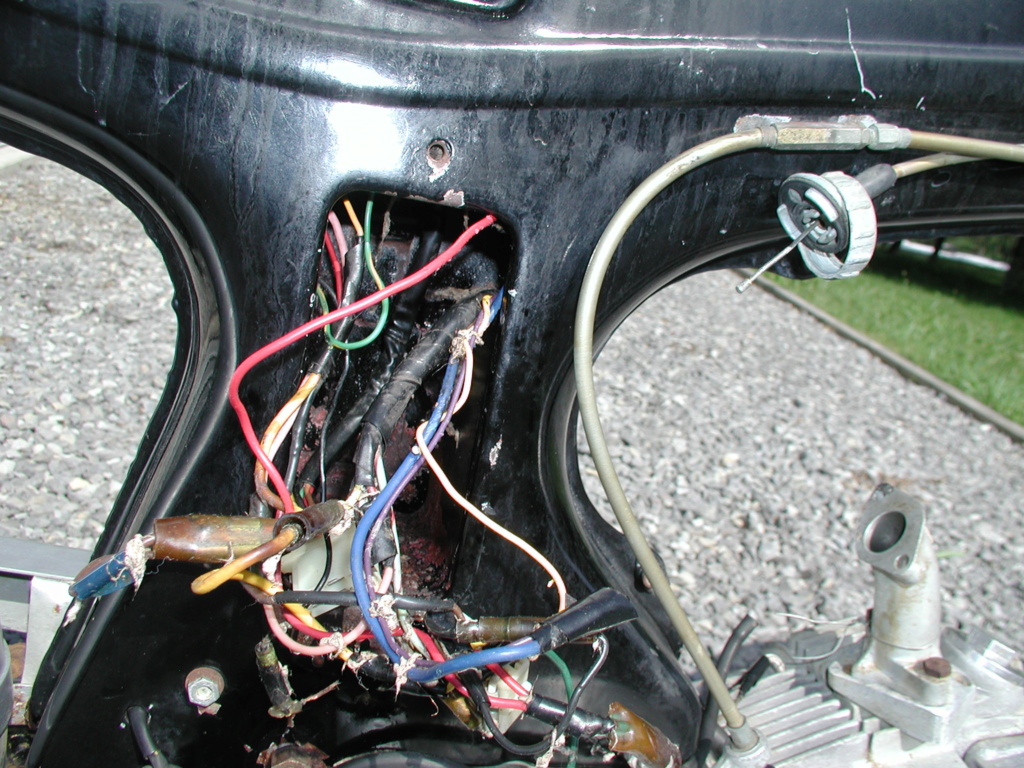 Of course I am only messing with Bob, I am sure by now he understands my sense of humor.

It wasn’t hard to talk him out of the rubber bumpers on the Midget... now he just needs to drop the ride height to pre-19741/2

Cribbs74 wrote:Of course I am only messing with Bob, I am sure by now he understands my sense of humor.

It wasn’t hard to talk him out of the rubber bumpers on the Midget... now he just needs to drop the ride height to pre-19741/2

Actually you weren't too far from Walt's Little Devil, just needed to round the wing tips and go with a slightly different elevator.

Yup, know the feeling. Consolidated all aftermarket accessories wiring to a new 6-fuse block under the 2001 Kawasaki ZG1200-B15 Voyager XII's false tank cover. Didn't want to chase the PO's in line fuses for each single circuit by disassembling the front fairing and tracing his wiring route

plus added a few of my own new circuits. 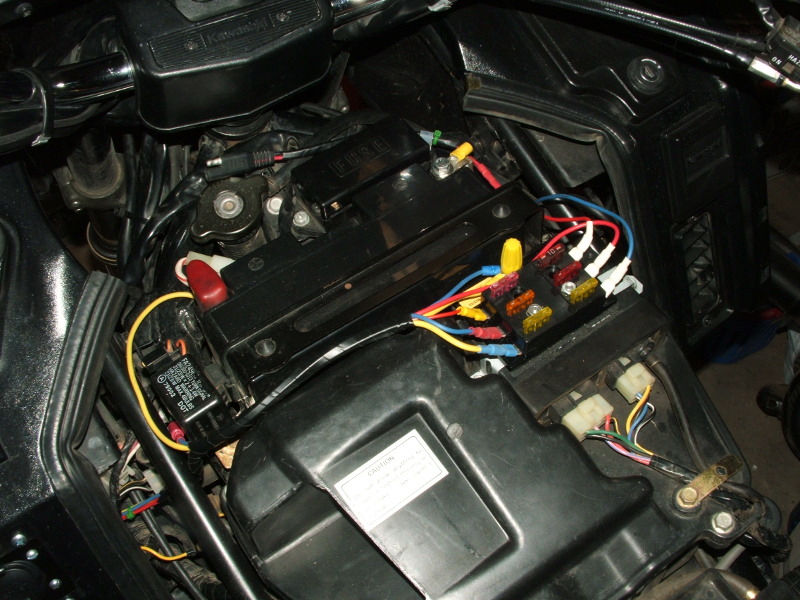 I just snipped everything back from the main harness and rewired. I was amazed when I switched on and everything worked. Still does.

Some big kid crushing my motorcycle. 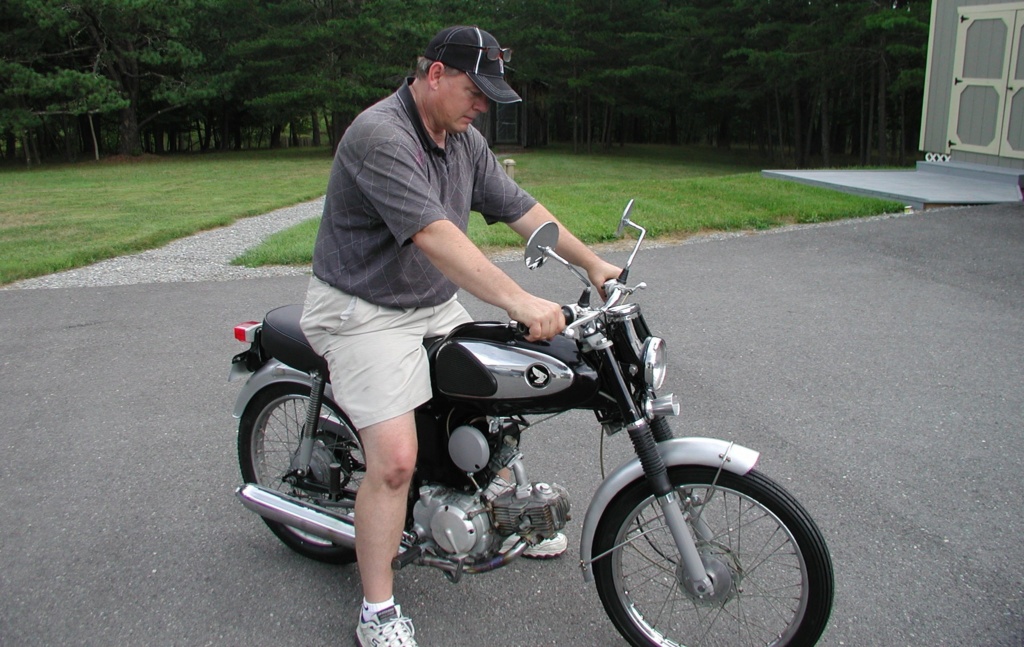 Fits me fine though.

I gotta tell you, Bob. Your S-90 looks a LOT better than mine!

I just tore my petcock apart, now to find o'rings, overhaul the electrics, and fix second gear. Maybe I'll put a rollcage over it and push it down the road with a stack of singing Babe Bees! 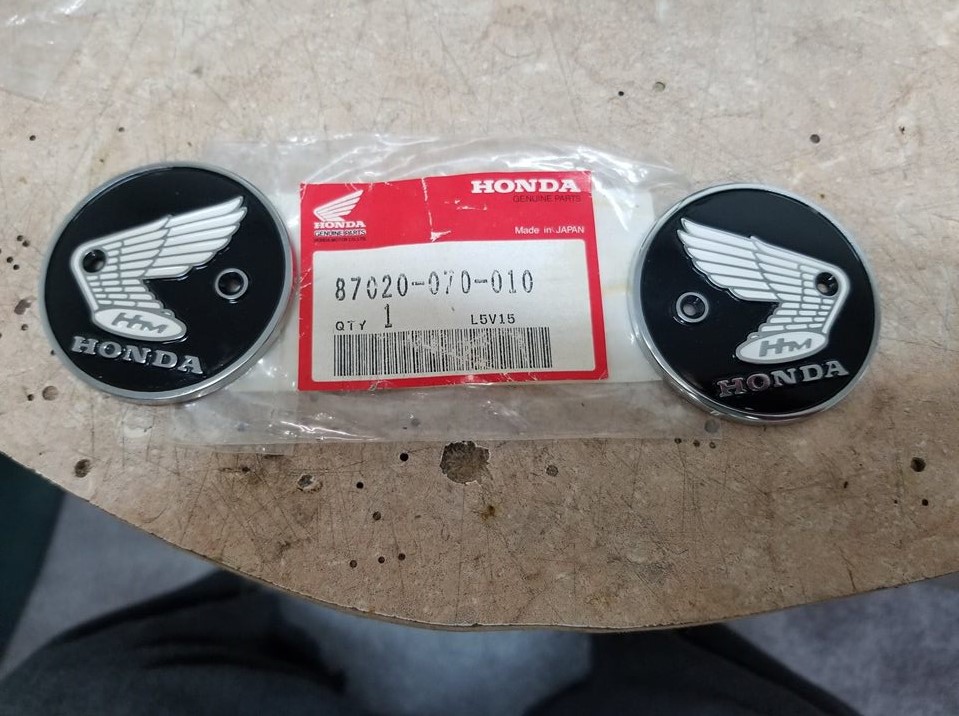 That's a well preserved S-90, Bob. I remember you posting earlier of it and restoring it. You don't see many of them nowadays.

I have something a little later, a 1971 Honda CB100 K2. Painted the tank and covers about 15 years ago. Don't have a current photo, just bought new tires, inner tubes and rim strips for it that I need to mount. Also have the 150 cc big bore kit for it. One needs to heat the cylinder to drop the steel sleeve out of it. Then heat to pop the new one in. Haven't done that yet. It will upgrade the 1970 SL125 engine I installed in it 36 years ago, when the old CB100 engine was totally worn out. (Seems that the SL, CL and CB used the same engine.) 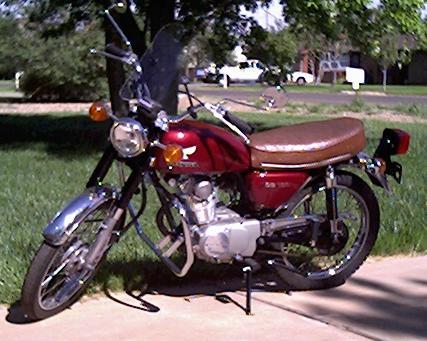 While in college, I took the seat down to a re upholsterer and for around $40 he did the seat in a brown naugahyde that he had.

Still have the small motorcycle white ABS plastic saddle bags that I bought from J.C. Whitney back in the late 1970's, used it to carry my books while attending the University of Hawaii in Honolulu. Also not shown, bought an NOS chrome high sissy bar for it. Planning to repaint the tank, covers and saddle bags in the factory style colour scheme of gold top, white bottom with a white stripe just above the white bottom.
Then I'll have my small moto bagger.

I’ve done several liners George. If you can convince the wife to leave for a day just throw the bare cylinder in the oven at 350 degrees and the liner in the freezer. Assuming everything clean/deburred they drop right in.

If you have a gas grille you can do that as well. The whole job including reassembly should only take 4-5hrs. Maybe longer if you have never torn that engine down before.

4 strokes are easy, 2 strokes are a pain as you have to line up the sleeves with the port holes.

I guess we went off on a tangent... what was this thread about again?

I guess the best of both worlds would be the SL 1-4 and the CB 5th.

Cribbs74 wrote:I’ve done several liners George. If you can convince the wife to leave for a day just throw the bare cylinder in the oven at 350 degrees and the liner in the freezer. Assuming everything clean/deburred they drop right in.

Ron, I may contact you off-line for details. I've had that kit for over 10 years, but having never done it has been a back burner item. It's of course a 4 stroke.

With the extra power of the SL125 engine, that upgrade in essence dropped the gear ratios, now they are more pleasant. As such, the CB100 was still higher geared because of its small displacement engine (6 cubic inches). The SL125 engine was bored out by a previous owner 1.0mm (0.040 in). Its displacement is 125 cc = 7.6 c.i. Having 27% more displacement, of course it is more powerful. When I drop in the big bore kit, it will be 50% larger displacement than the CB100, which will be a sizeable increase in power.