I thought as I looked at the box, and I was right.

Shipped from New Jersey, so it didn't have far to go.  It should have been delivered Saturday, I wondered why it spent two days at the  Dulles sorting facility. 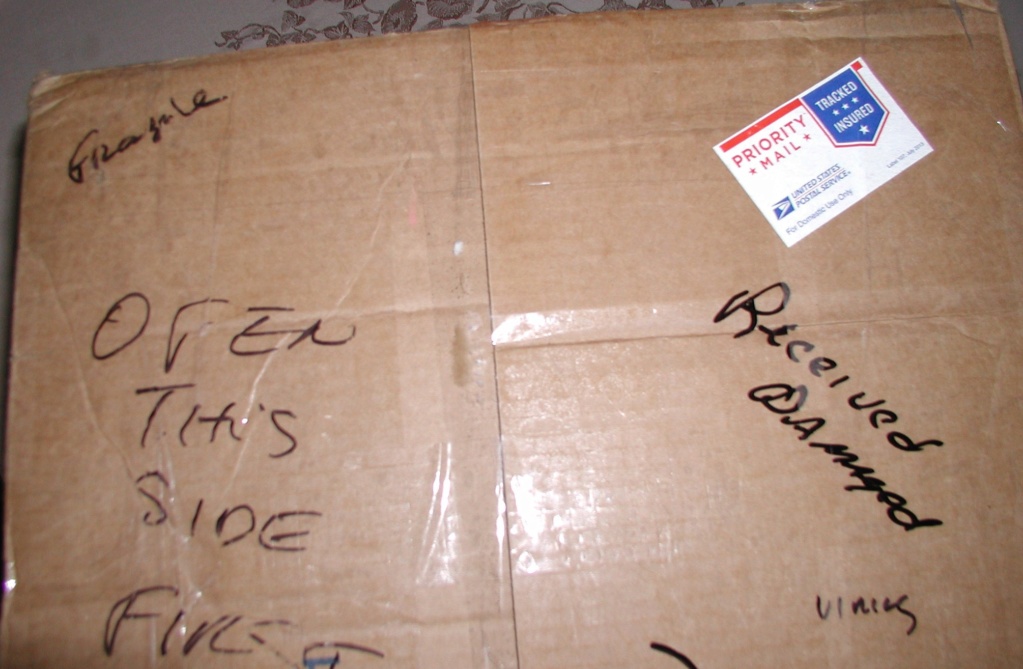 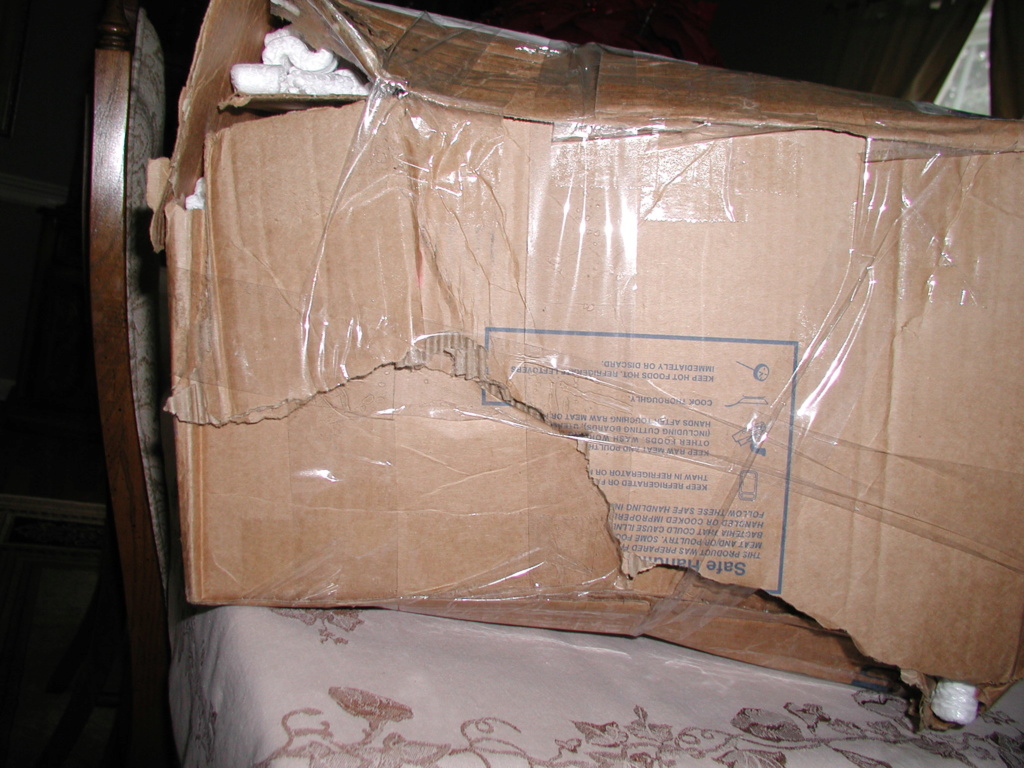 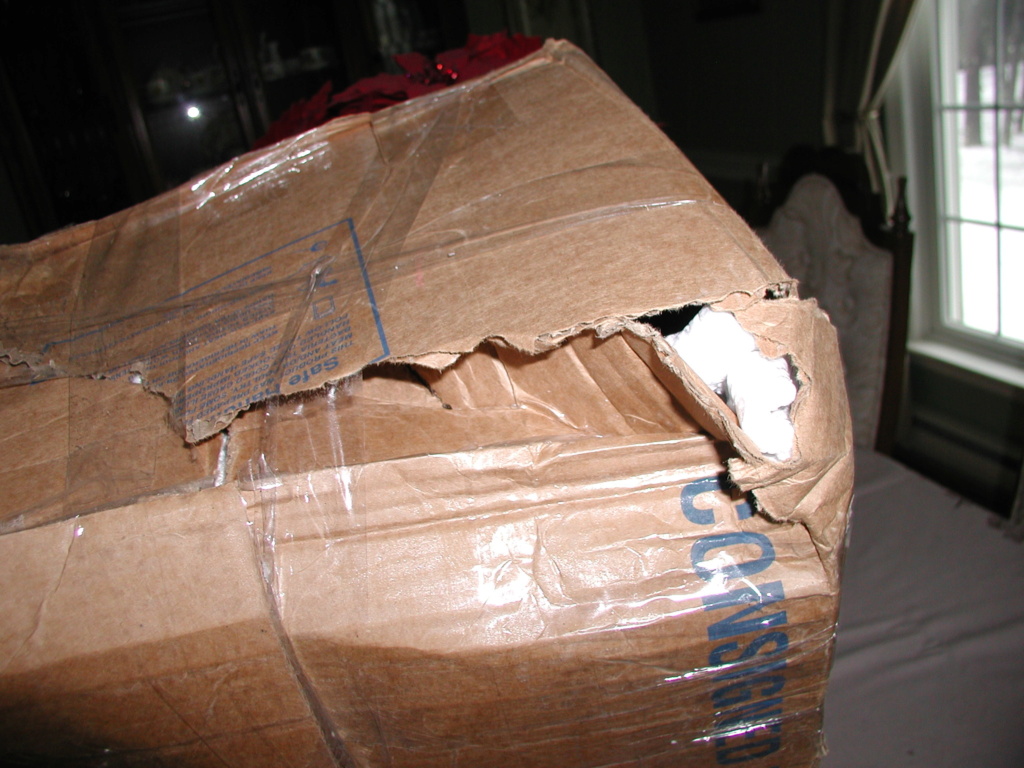 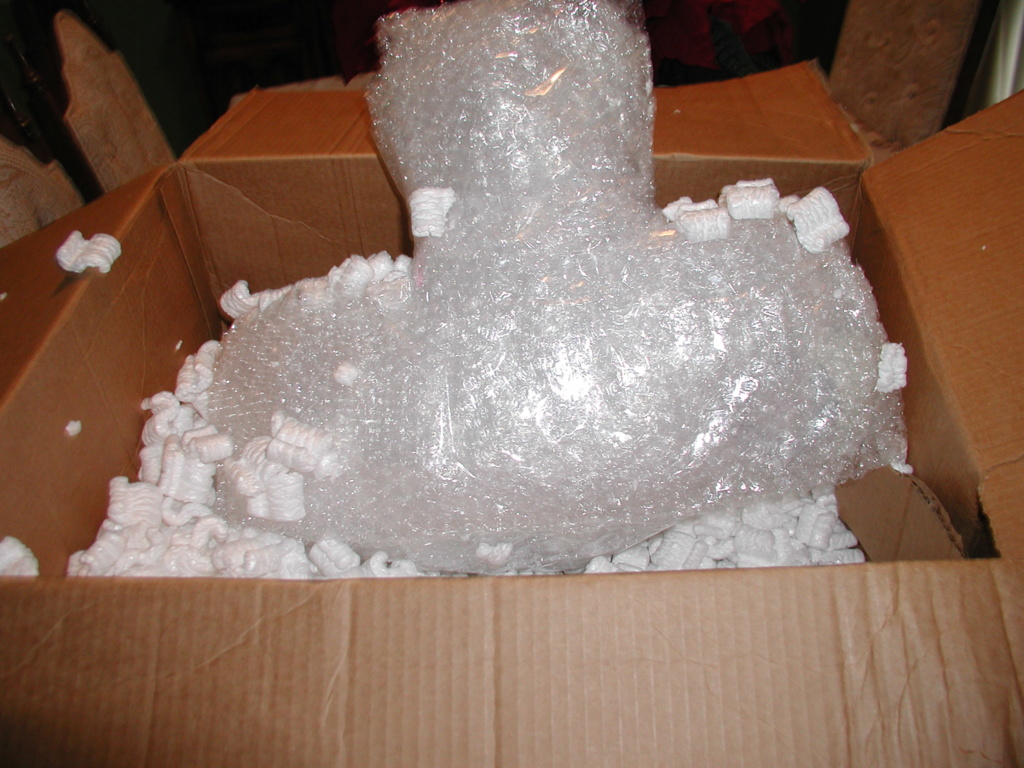 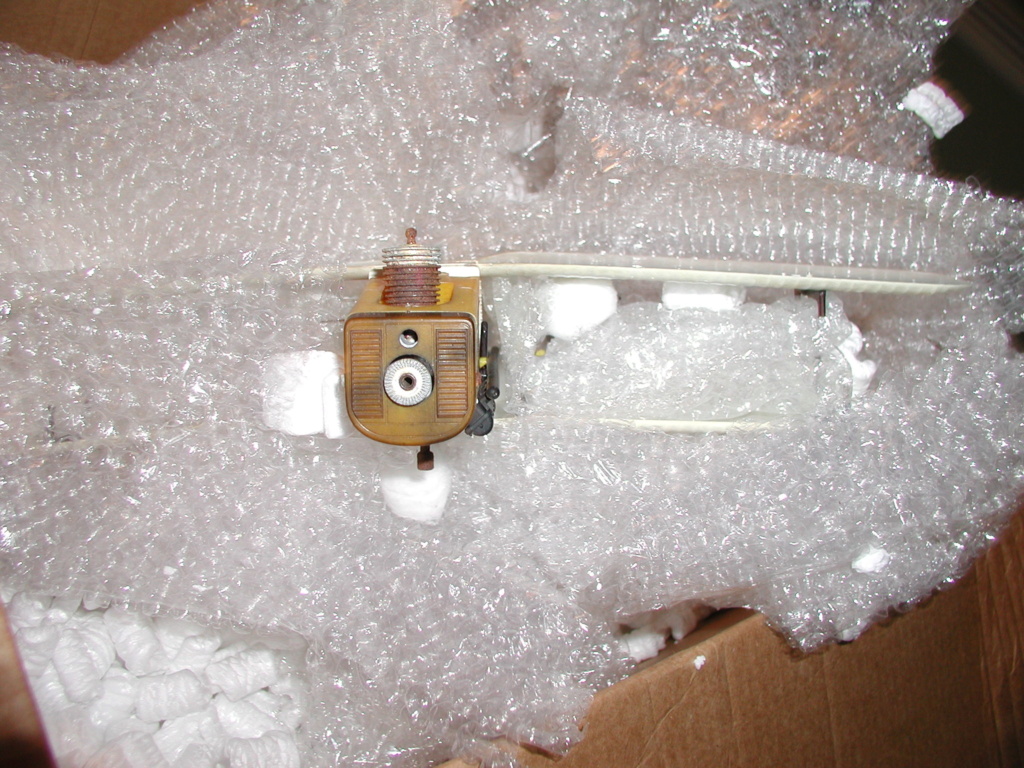 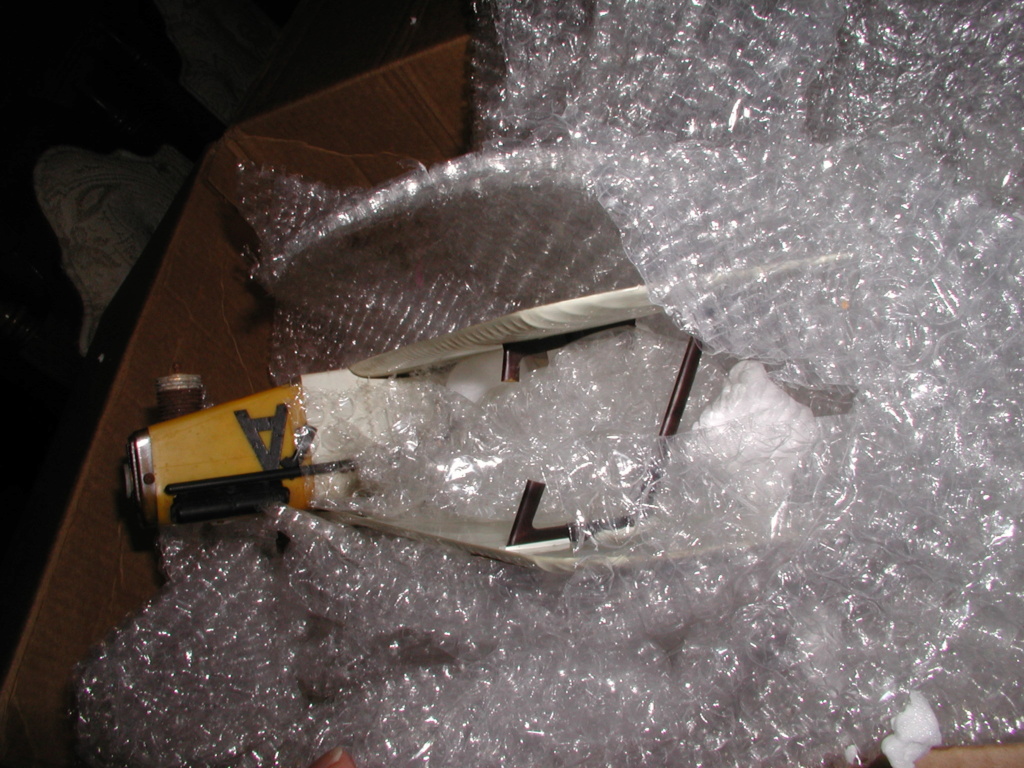 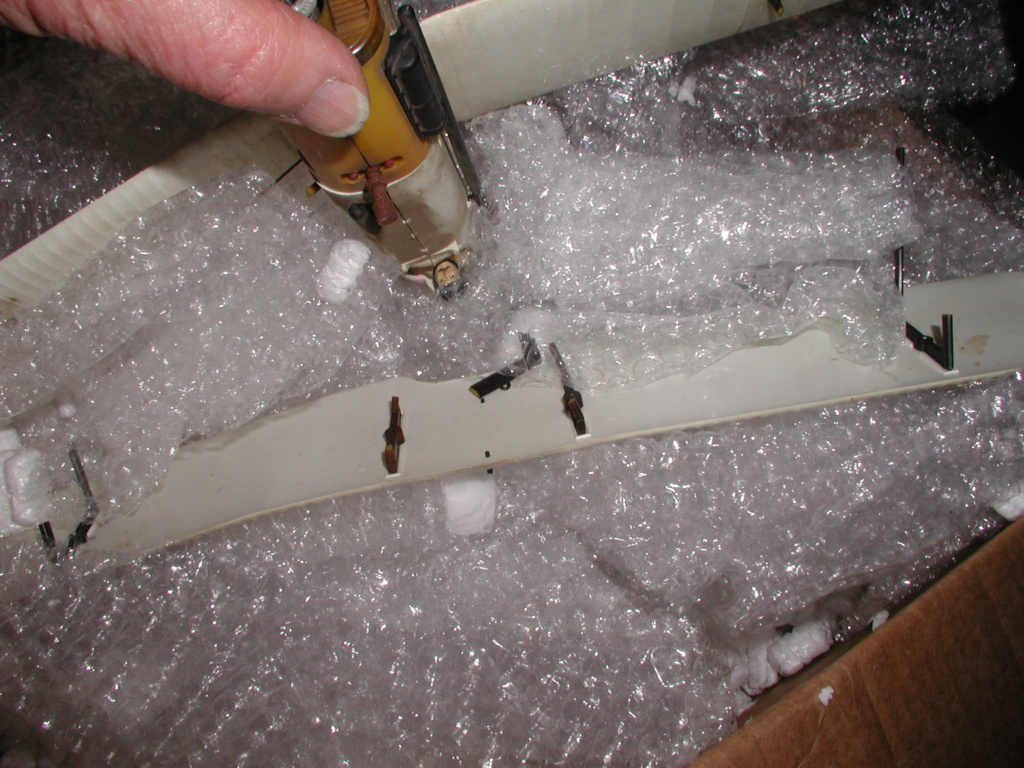 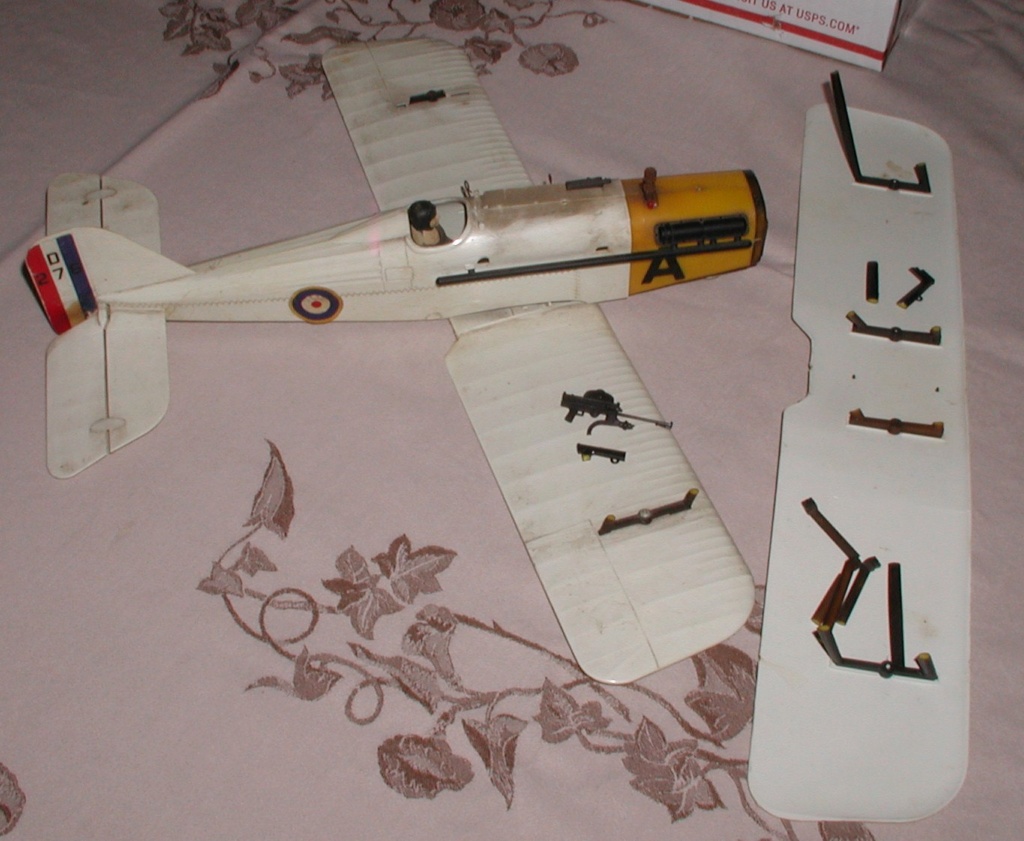 So much for that Lewis MG Fred.

Sorry Bob, I know the feeling. OTOH you excel at polishing turds. This should have made your day!

Are those strut mounts plastic?

Well that Sucks !! Jason to the rescue !!

First thing I thought of Jason.

Yes, but it seems like a special kind of plastic, more rigid with no flex. Witness the breakage.

I have become rather adept at plastic repair, but this is different. May work, may not. I contacted the seller, the package was insured for how much I do not know. The model with shipping was close to $200. I asked for a full refund and to keep the model for parts. But, this is rare. I have never seen one like it and may never see another. Told them that.

I blame the PO and the PO. Seller should have printed FRAGILE in big red letters all over the box and not have packed it so tight within the bubble wrap. They did remove the prop and wheels and put them in a separate box. 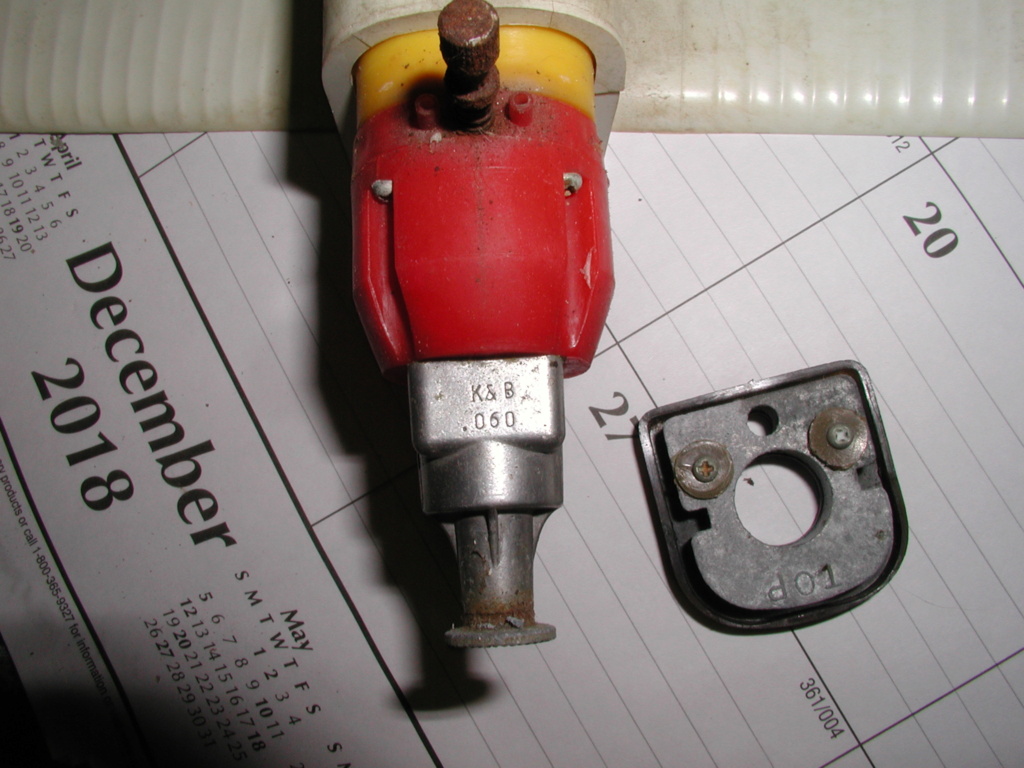 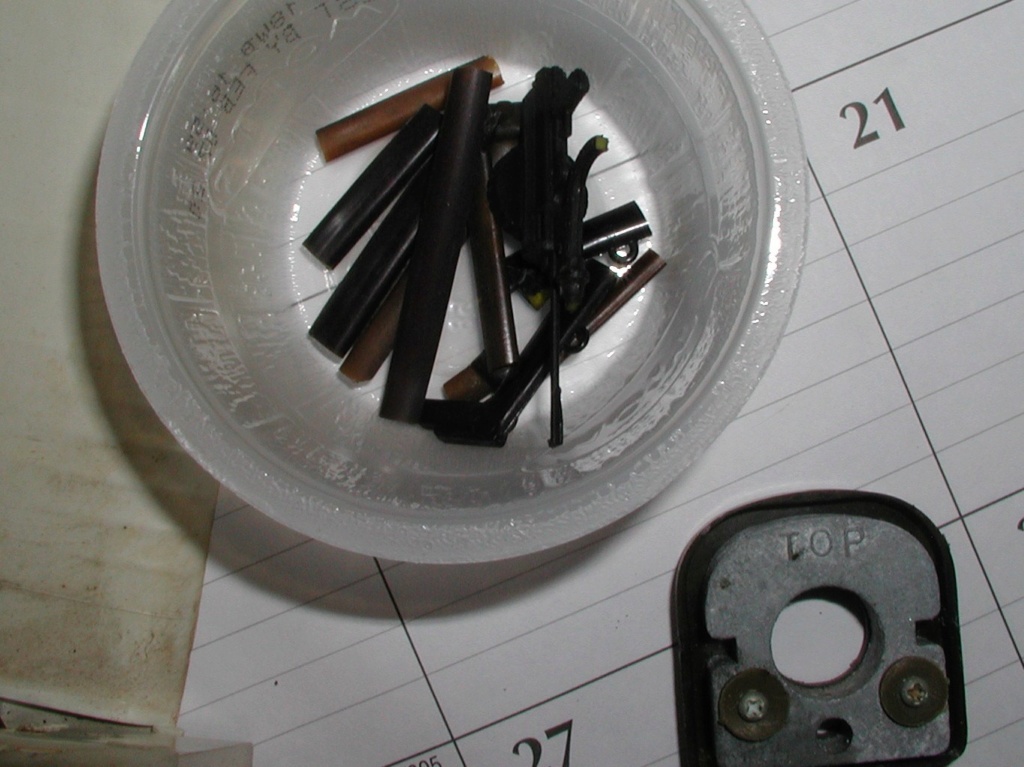 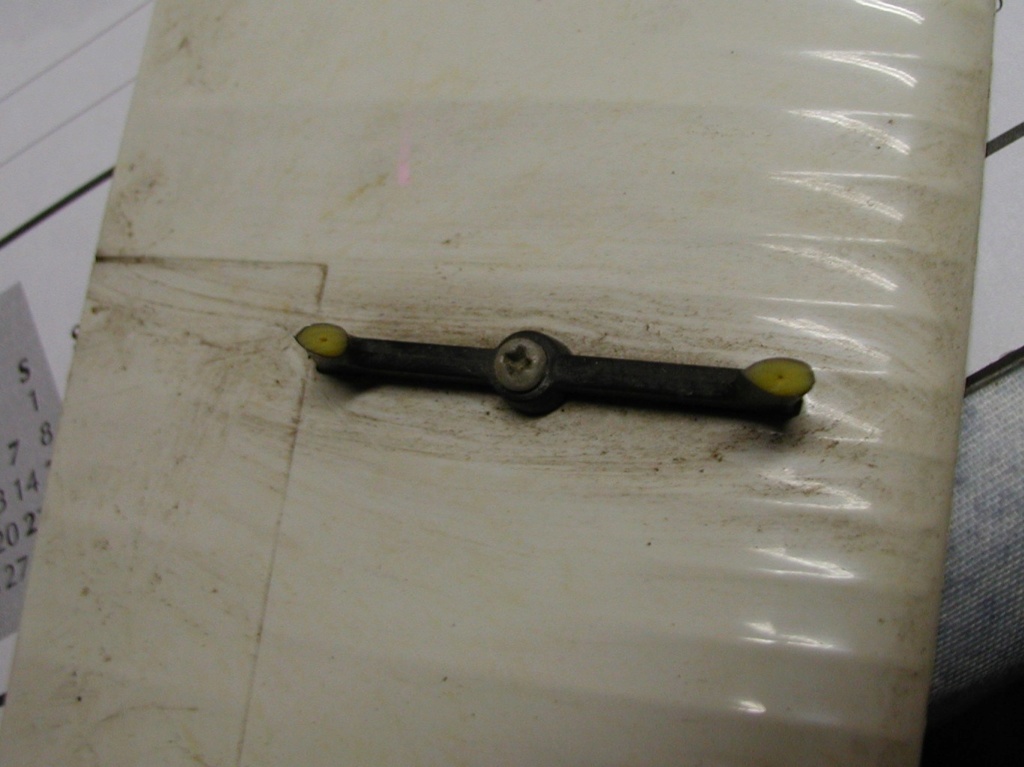 The only packages I have ever received broken had “Fragile” written on it. For that reason I refuse to write fragile on anything going through USPS.

I am not pulling your leg either. Every package, I swear they have a bunch of bored teenagers working at the transfer stations.

Judging by the pictures, the seller made a good effort to protect it.

Man I feel for you Bob.
Any way you look a it, it's a crying shame

Carbon fiber ABS filament is about as ridged as I can print for material. It’s light too.

An insurance claim may come out as the seller hopes as the shipping agent will always claim he didn’t package it properly. BTDT.

As mentioned if you want the model ask for significant discount.

So it's only the wing-struts that got damaged? If so; you're pretty lucky. I could never send a model through parcel-post.. because of the possibility that this could happen. It seems these days; that it's more a probability.. than a possibility.

That model wasn't packaged well at all. It's a shame.. because the person who packed it up probably thought it would be fine. Here on this forum; we have seen numerous cases of destroyed parcels. The seller likely figured that there wouldn't be any damages.. and even insured the parcel.. probably against "loss".. rather than damage. Lesson learned X2

Sorry to hear of your loss, Bob.

If I were the shipper, I would have carefully disassembled the upper wing and fragile cabine struts, landing gear and anything else that might not survive it being bounced around, packed them separately in the box. Then you wouldn't have had that result (unless they decided to run it over with a forklift.

Some time back I received a UPS package with a boot print smack dab in the middle of it and resulting partially crushed box.

But I am sure you'll eventually come out on top.

Sorry to see and hear of this Bob. I have shipped wings a couple of times, and have always cringed when I drop them off for shipping. I too do not personally like shipping planes. Hopefully you and the seller can come to some sort of agreement.

If I'm shipping something a bit fragile I get a plastic container from the shop i.e. Tupperware type. You can get them square round rectangular for a few bucks. I just add it on to the cost and if I'm receiving I ask the sender to do the same. If the shipper's going to run the forklift over it it won't make any difference but those containers can handle a bit of rough treatment. Then I pack the container in a box of foam chips or the like. Shouldn't have to do this, people should take pride in their work but unfortunately life is what it is.
Awhile back a few postal workers were caught on camera giving parcels a hard time in their break just for fun.

Four or five years back I bought a Browning Monte Carlo shotgun stock from a shop in the US. They wouldn't ship gun parts overseas so I had it sent to a friend in California to ship on to me. Woodwork is a permissible export but it was just their policy. A week later my friend emails me to say the package arrived empty but stamped several times as received empty. It amazed me that no one seemed particularly worried that the contents had disappeared but the wrapping had to be tracked all the way.

The shipping box looks like some low edge crush test 100% post consumer recycled fiber "one way" box (think the shipping box that has a dozen packages of toilet paper inside) that just wasn't up for this job.

AH Yes, I've seen that damage a number of times from the USPS ……
What happens is the package comes into the facility and by conveyor it is loaded on the top of a rotating carasell unit.
It then slides down the side in the vertical position and rides around until ……..wait for it !!!! a fifty pound safe pile drives it until it breaks open the box and all the stuff falls out !!!!!
It took them two days to gather it all up and re-tape the box....
Once a box of delicate airplane parts from NM got to me a week later all taped up and when I opened it the box was full of cabinet drawer pulls , 25 to be exact.
I wrote it off as a total loss and didn't even discuss with seller ...Not his fault !!!
You tax money at work !!!
Sorry Man......

I think the ABS would work fine (your NOT going to fly it anyway) If the usps would take the $$ out of the employees pay for stupidness a lot would probably stop being that way .

Sorry to see that Bob, looks like a decent airplane, it might have a silver lining in that you might settle up and still keep it? Thin super glue would be fine to repair struts for display and with your touch it looks like it would clean up nice. The four blade prop was usable for flight, i don't know if the two blade prop was included or not, good question.

Greetings! Just curious .... what's the possibility of having those components 3-D printed

"I think the ABS would work fine (your NOT going to fly it anyway) If the usps would take the $$ out of the employees pay for stupidness a lot would probably stop being that way . "-- Getback

Have you ever been inside a USPS package sorting facility? There's more criminal stupidity inside than you can imagine. The postal inspectors arrest and fire the help faster than they can be rehired off the skreet.

Mark Boesen wrote:Sorry to see that Bob, looks like a decent airplane, it might have a silver lining in that you might settle up and still keep it? Thin super glue would be fine to repair struts for display and with your touch it looks like it would clean up nice. The four blade prop was usable for flight, i don't know if the two blade prop was included or not, good question.

Thanks Mark,  Maybe that Plastic Weld you recommended would work.  It's pretty thin and works well attaching decals to plastic. But I have had great luck with regular old Testor's Red Tube plastic cement.

I heard from the seller.  She is giving me a complete refund and says - Keep the plane.  I am sending her all my pictures of the damaged box and airplane, she is hoping to recover some.

This is getting worse.  The more I get into that model the more damage I find, but the more I like the model.  I tell you, it blows away any plastic C/L model I have ever found for engineering, detail, and construction.  I have to do a page on it.

From the weighted nose piece, to the detailed pilot, to the functional shock absorbing landing gear, to the flexible press in elevator hinges, this thing is marvelous. 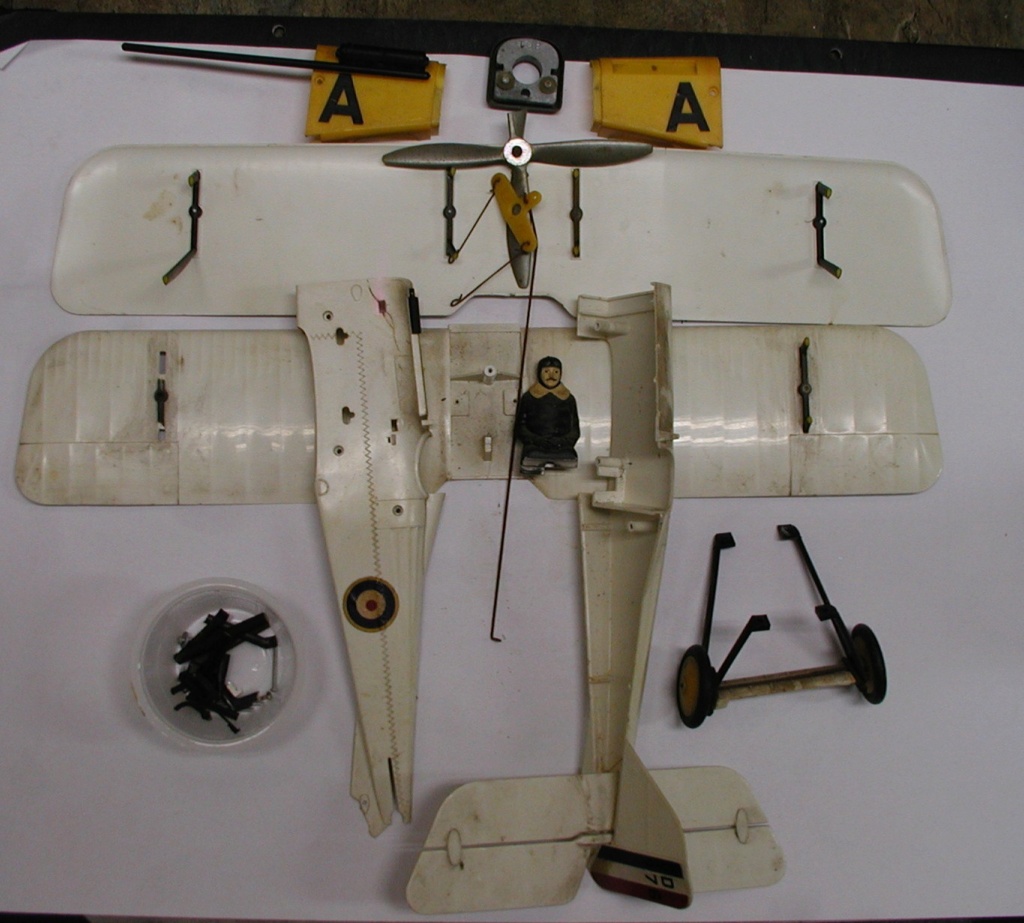 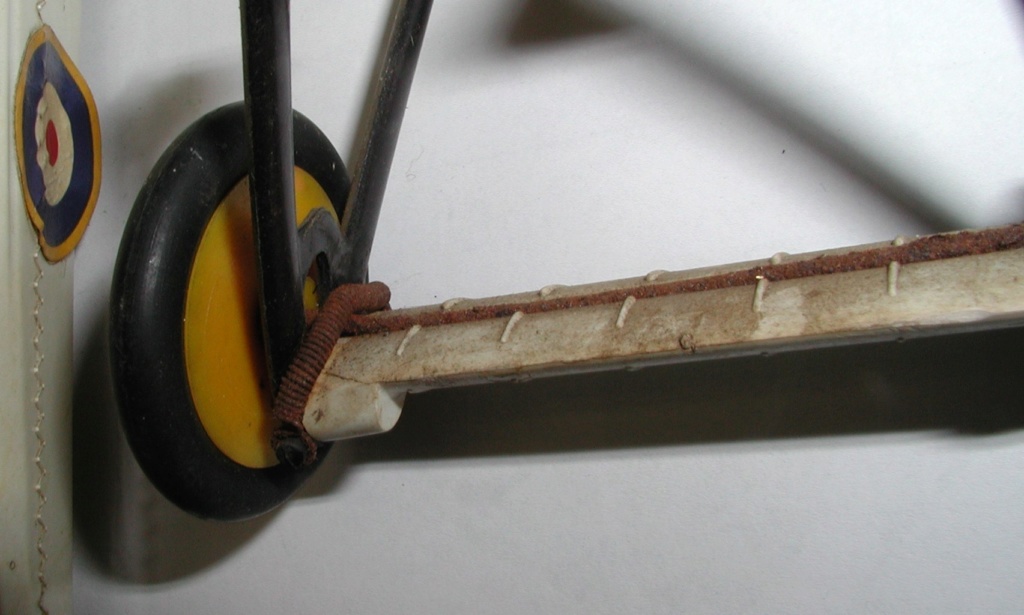 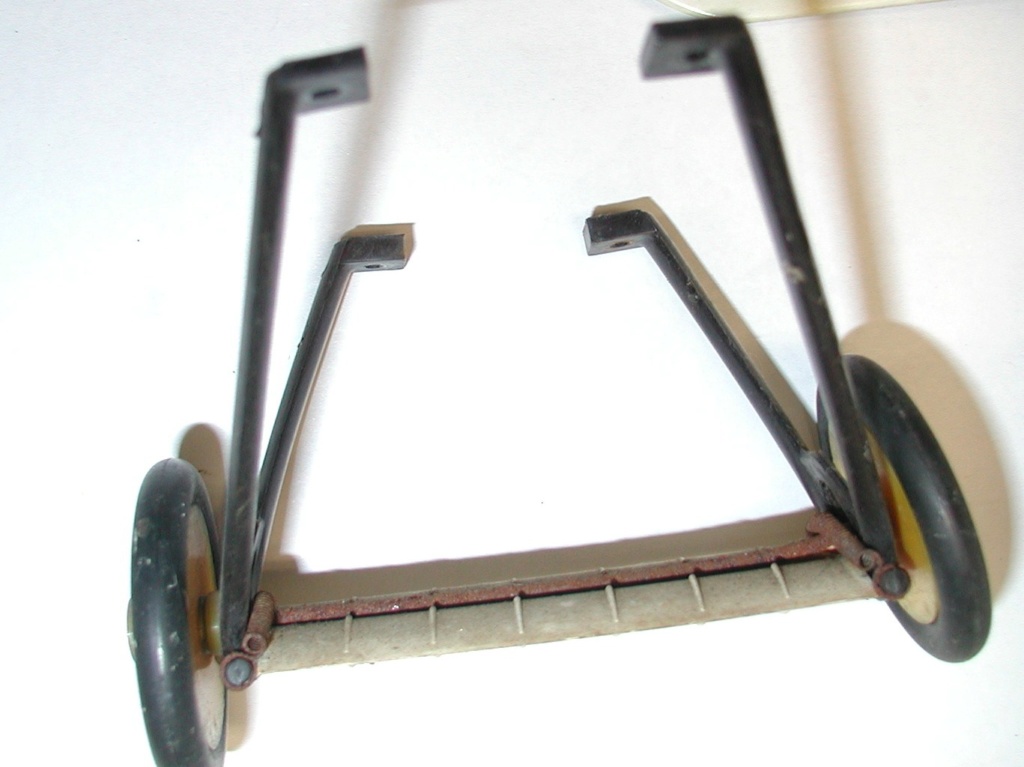 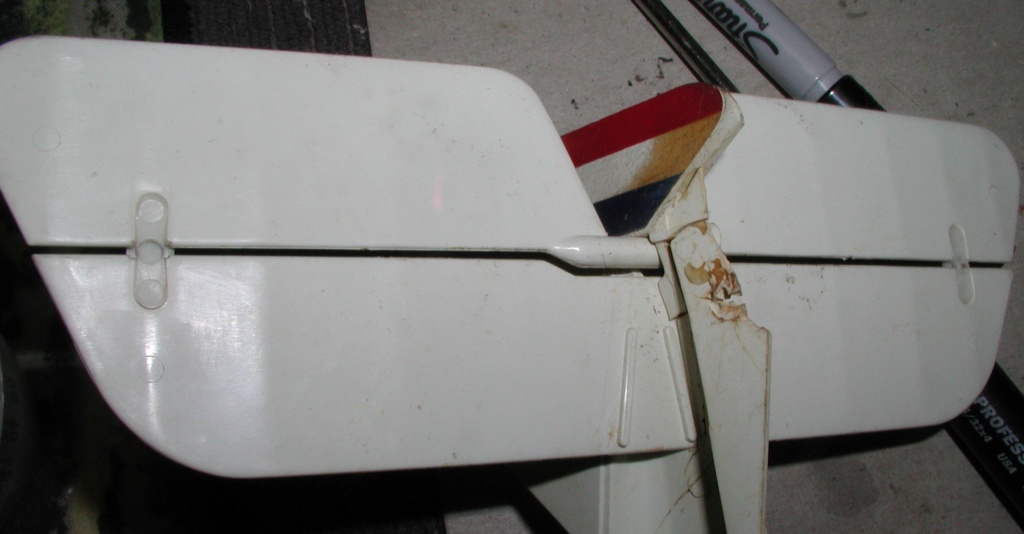 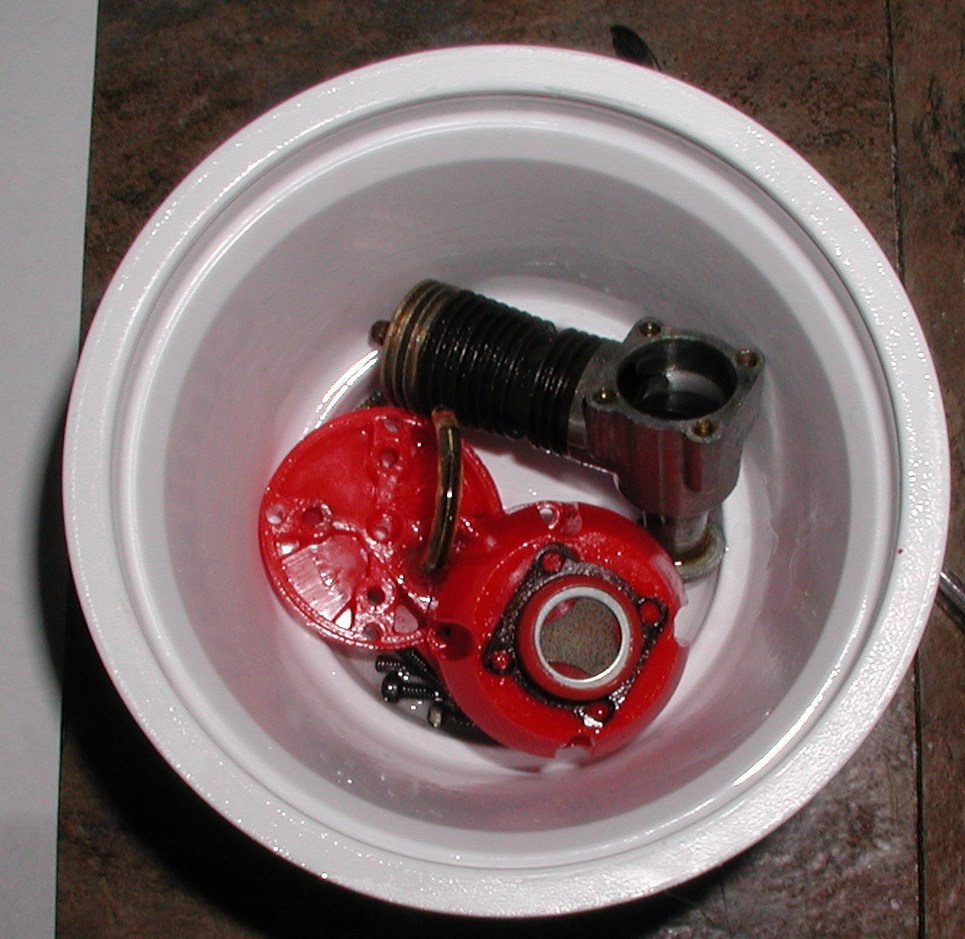 Maybe some black carbon fiber for struts? Free makes this a sweet deal.

that might of been the other Mark, i'd go super glue,  thin or maybe medium might be better? I rebuilt a badly busted up Comet Starfighter using super glue, would taken forever with anything else.

interesting, also i noticed the nose weight, I've only had the kit Se-5a and didn't know the RTF gas powered used a nose weight.

The plastic pilots were painted by Aurora employees who would take them home and paint them in their spare time for extra money.

Looking like it is coming along Bob. She is now in good hands. But I noticed one thing in your engine-in-pieces picture. Would it at all be possible please to get a better picture of your reed? Even if still attached in the tank front. I have an .049 Aurora Torpedo that had reed problems, and yours is totally different, and I do believe that they had changed at some point. With a picture, I would like to try to re-create that style reed and give it another go. Thank you, and keep up all the good work!

i'm not sure of date, likely very early 60's after Aurora bought K&B (1960) and after their much advertised 'Flex-O-Matic' valve design.

I gotta wonder if a brass Babe Bee reed would work? 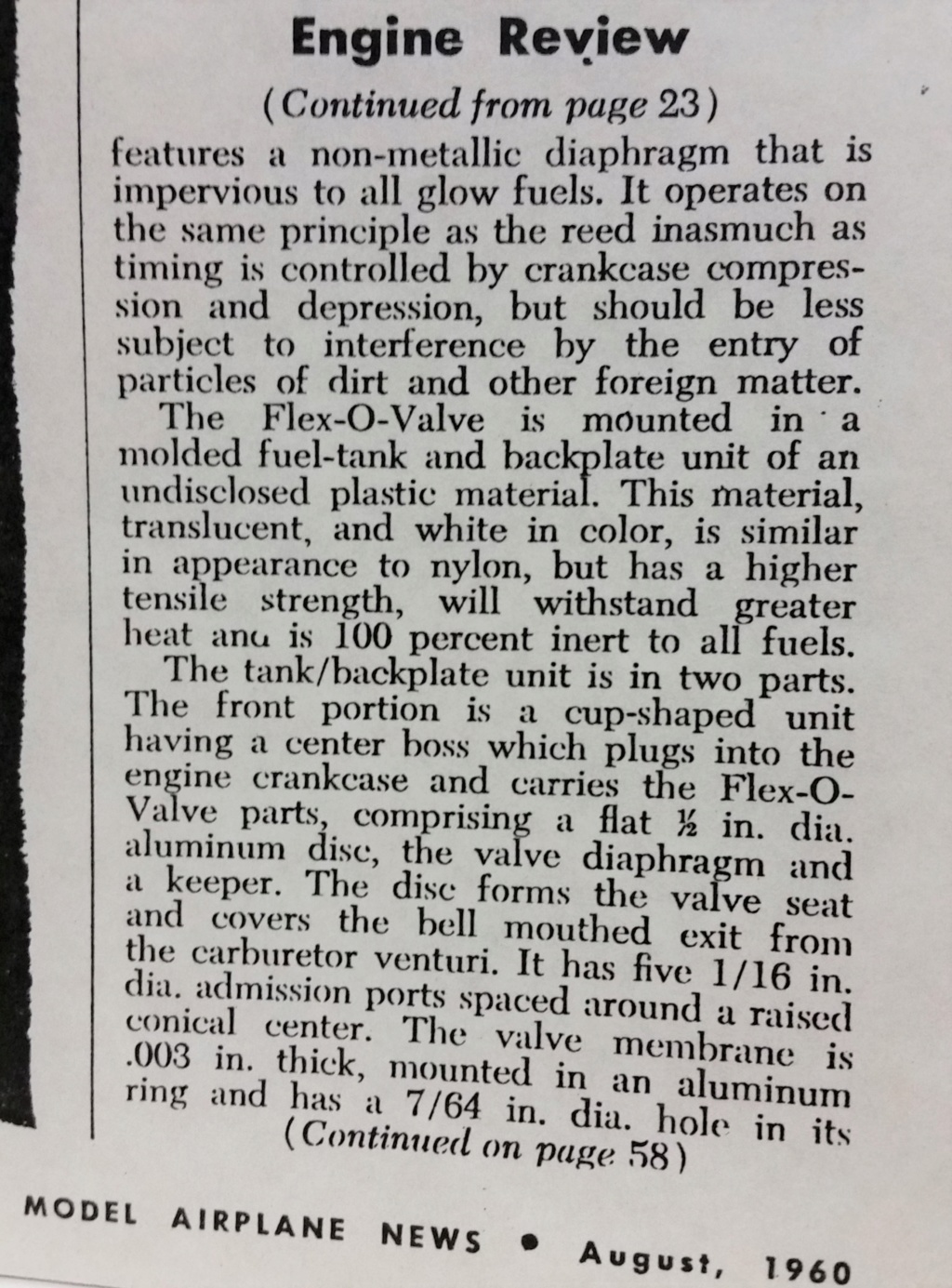 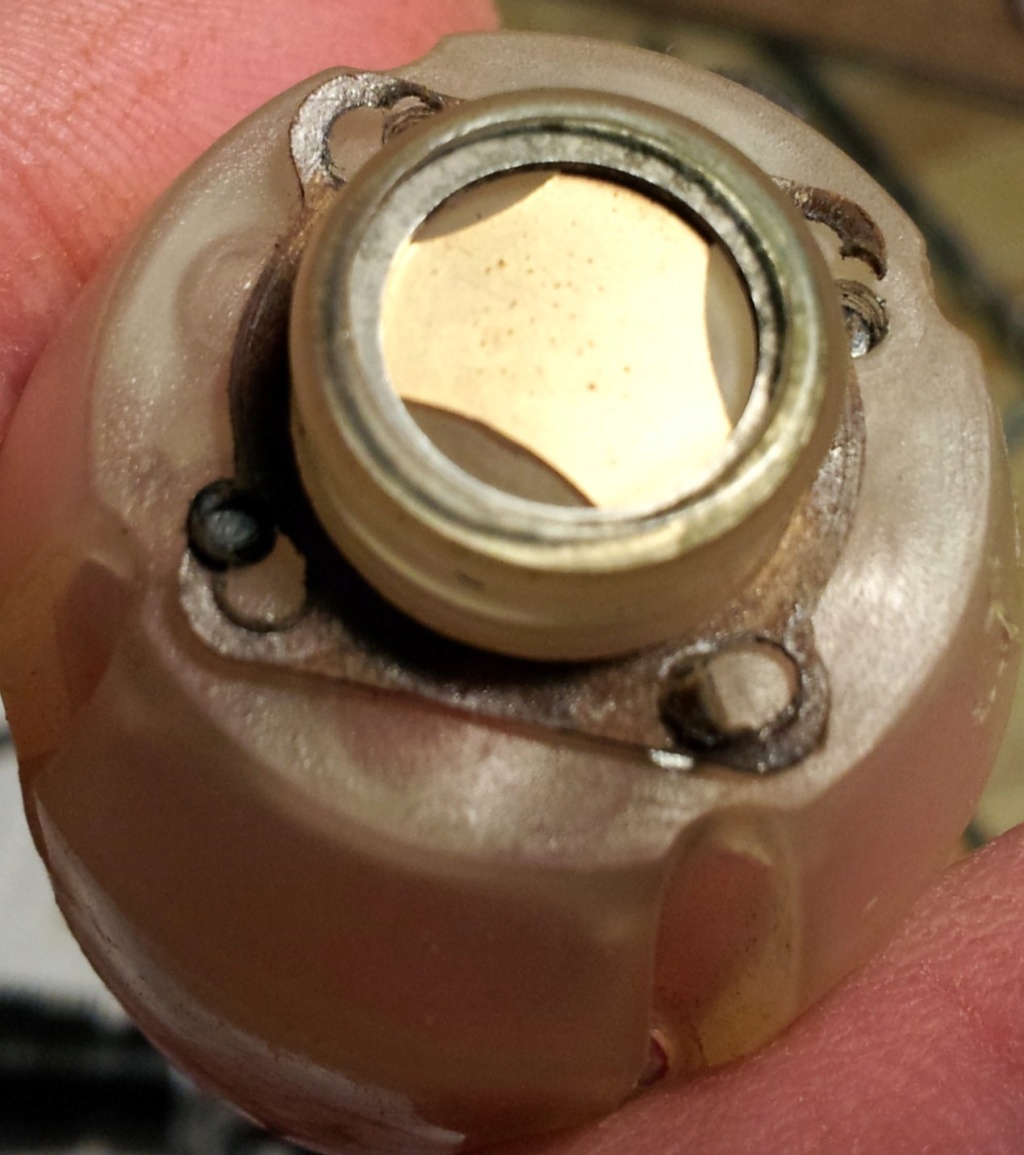 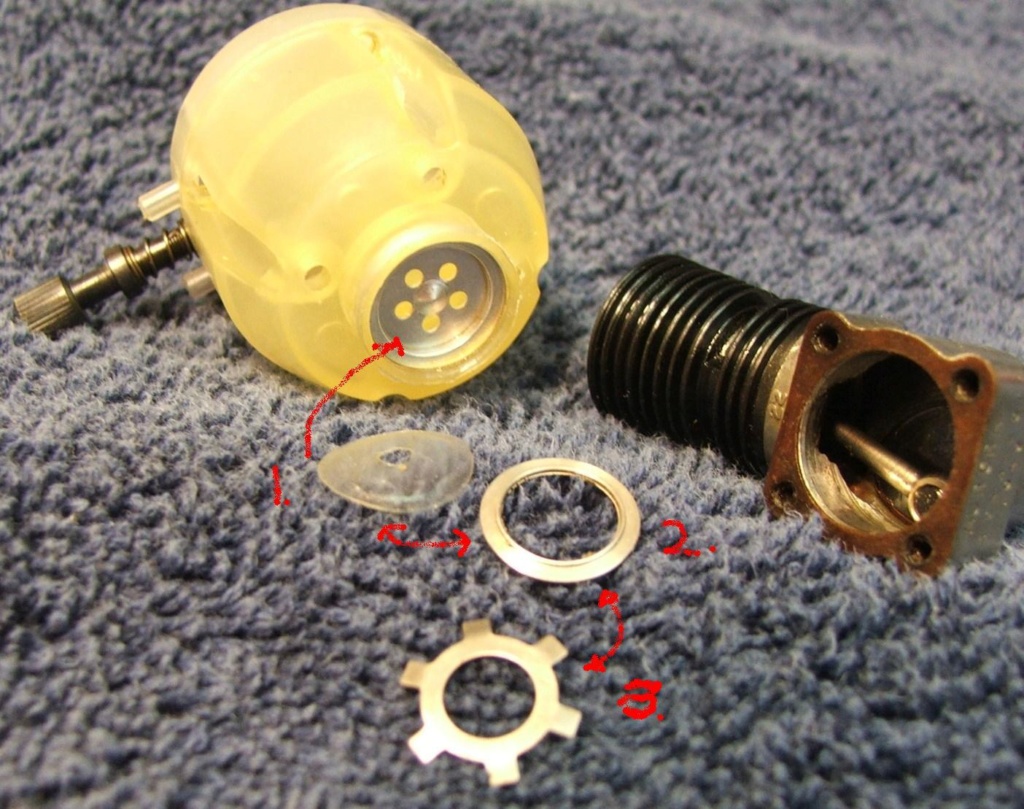 Looks like Mark has both of us set up Chancey.  But, I have both, a .049 and .060 and will do an exploratory and let you know, dimensions etc.

Here's pictures of the pilot and nose piece on the Aurora Mark.  Both nicely done.

I'm naming the pilot "Douglas Bader" after the WW2 British Spitfire ace who had both of his legs amputated after an accident before the war and still flew combat missions against the Luftwaffe. 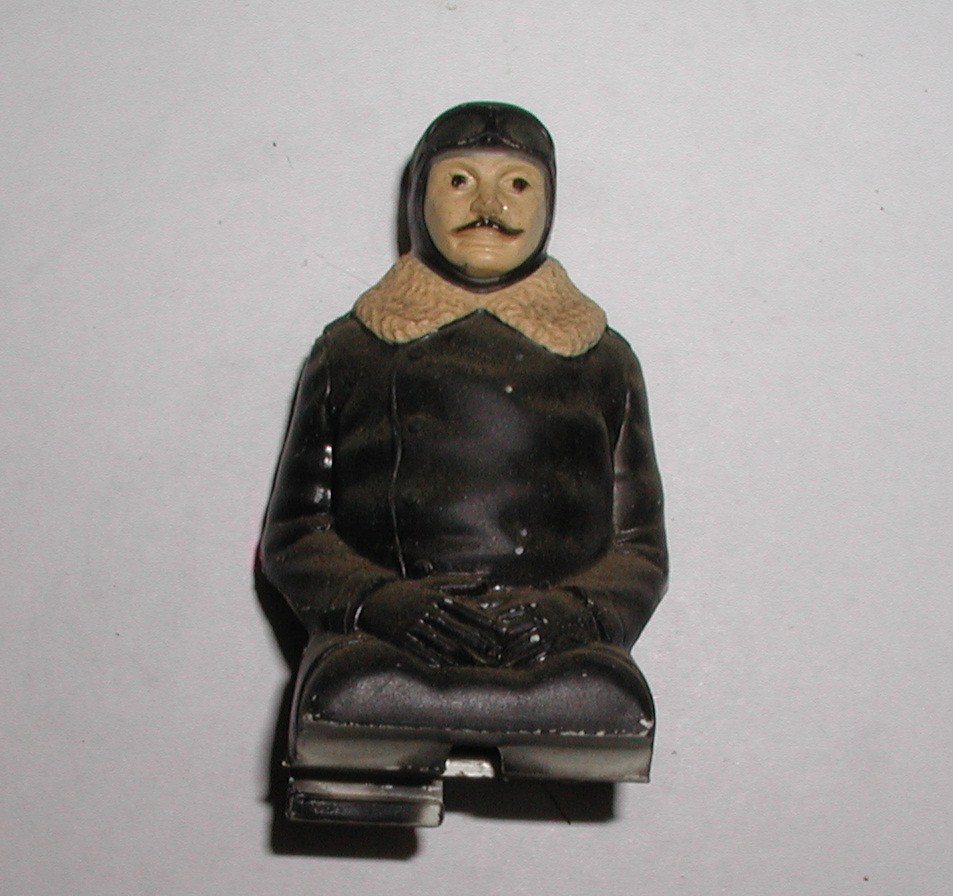 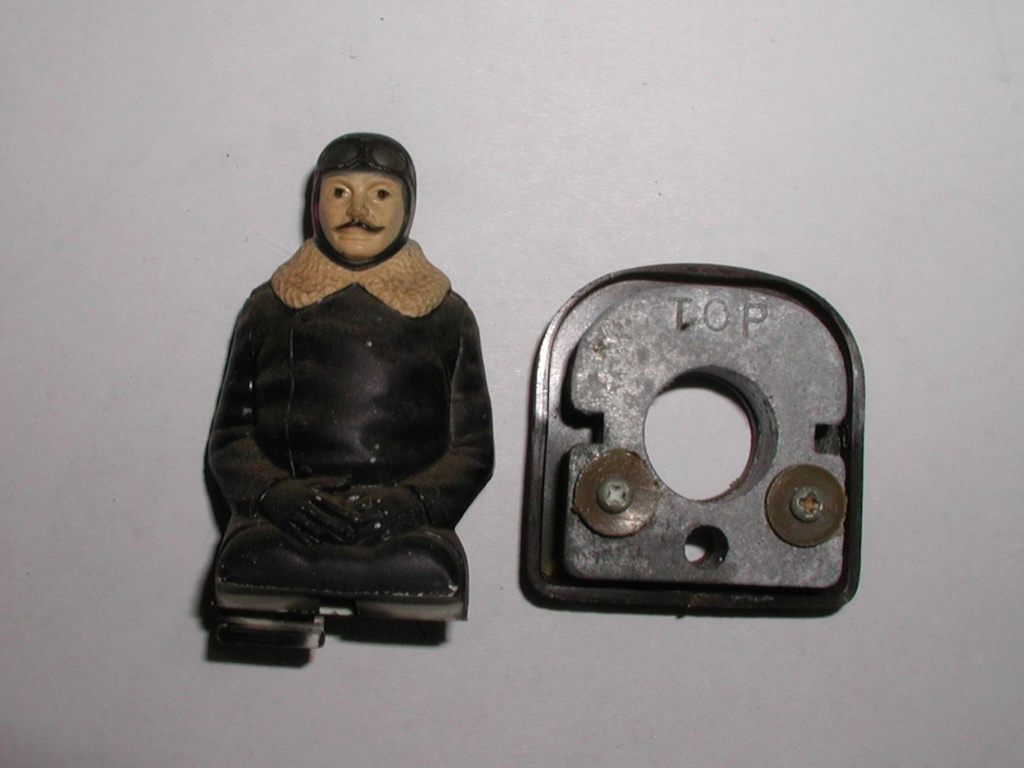 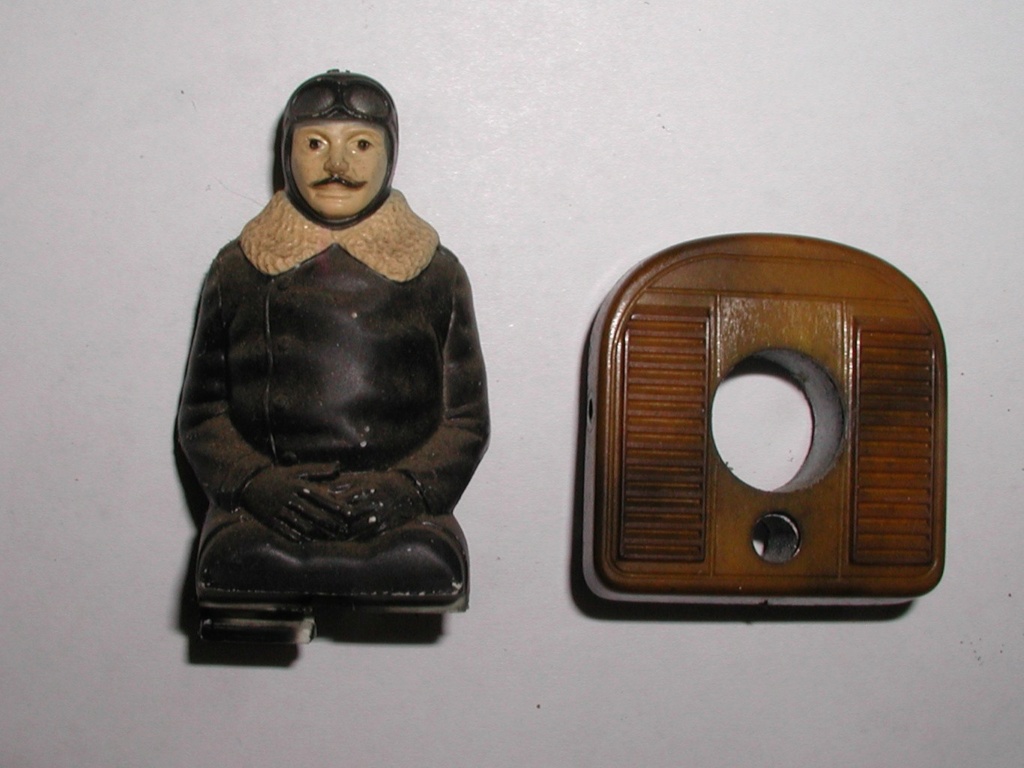