AMC-AMX, now there was a car

AMC-AMX, now there was a car

I know there are many here that love their cars, mine is a 1968 American Motors, two seat AMX. I have tried to post a few pictures and just haven't figured it out yet, Until then. I bought my AMX new in September 1968, after my tour with the Navy was over. It was a demonstrator, but I wanted to order a new 1969 model. I was told that the AMX and the Javelin were built on the same assembly line, and the AMX was built only when so many orders were received for the AMX. Would I wait the 8 to 12 weeks for a 1969 model to be built, I did not want to weight and bought the 1968 AMX that was the demonstrator. It was built in April of 1968, and came in the color of Caravel Blue, with the neat over the top white racing stripes. Tan vinyl interior, 3 speed Bog Warner automatic on the floor and A.M. radio. Under the hood, was a matching blue painted 343 C.I. V8, with a Carter 4 barrel, duel exhaust with chrome exhaust tips. The rear gears were only 3.15 to 1 as that was the best from the factory with the automatic. Over the years it has been a garage car and driven very little. The speedometer today shows 157,028 miles, but that is an exaggeration as to a rear gear change from 3.15 to 3.73 many years ago. to drive 70 mph the speedometer has to read 80 mph. Other changes to my AMX are: the very rare, all chrome rally wheels, only as a dealer option in 1968, that I bought at a car show in 1975. I also installed the rare, rally pac instrumentation in the center dash that has, 24 hour clock, oil pressure and ammeter gauge, the clock would normally go where the tachometer is. The engine was built and bored 0.30, over with the then rare group 19 steel rods and crankshaft, with stock 10.25 to 1 pistons. A Crane Fireball cam, along with Rhoads lifters, and the new style oil pump that would solve the AMC engine oil problem failure. The heads are stock rectangle and not the newer dog-leg, they have been matched to the intake and the valves have a 3 angle grind. An Edelbrock R4B Aluminum intake, sits under a Carter 625 CFM with electric choke. An original set of Cyclone exhaust headers, flow through a set of Wagner Super Turbo Mufflers, all along a 2 1/4" exhaust outlet. The Bog Warner Automatic model 11, was not a performance transmission at all. The insides of the model 11 were rebuilt, with the model 12 insides and planetary gear sets, that came with the 390 engine. The clutch pac was upgraded to the metal impregnated fiber pac that gives rock hard positive shifts, along with a higher pressure oil pump and added transmission oil cooler.  The rear axel and hub are a weak point. The axel shaft ends are splined to match the hub splines with only a 3/16" key way machined to lock everything and held on with 1  5/16" nut, and that setup is all that holds the rear wheels on.  The axels now, have had a second key way machined 180 degrees opposite the original, and both key ways were enlarged from the original 3/16" to 1/4", problem solved. The AMX was not meant to be a Corvette chaser, nor was it intended to take from their sales, it was an attention getter, to draw other customers into the AMC show rooms that weren't familiar with AMC and what they were trying to sell. The performance of my 1968 AMX now, is the way AMC should have built it from the factory, as fast if not faster than a Camaro Z28 of the time. Sadly, like its car cousin, the Studebaker Avanti, both had so much potential, only people were just not buying it. We as Americans are at a loss today, as these two car company's don't offer us a choice to go along with what is being offered today.

I get the impression that you really like the AMC AMX! I congratulate you on hanging on to your car for so long. We had a kid in high school who had the 69 AMX. His mom bought it for him, I don't think he really knew what he had, drove it like a girley boy. Never hot rodding or racing it. It sure did look nice in the School parking lot!

I enjoyed your story Eddy.  Brought back memories of my Dads 1953 Nash and many Ramblers.  The Nash, we called them Nash Cans took us from New Hampshire to LA in 1954.  A comfortable long distance cruiser but not a performance baby. 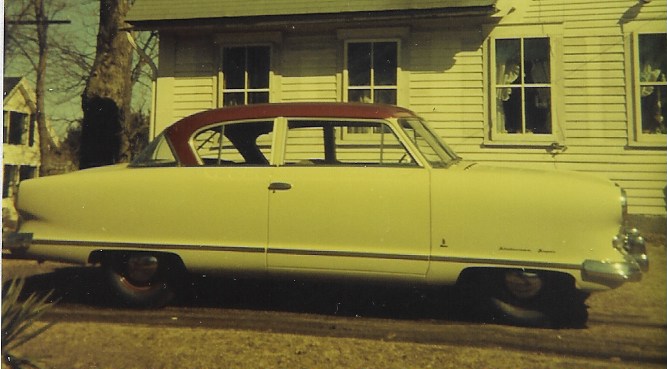 PS:  I drove all my cars like a girley guy Rene.

I sold my bought new pampered 1985 RX-7GSL to a beautiful Italian 20's something girl who wrapped it around a telephone pole two weeks later.  She drove it like a guy girley.  Same for a fellow that bought my 1974 Corvette, and a kid that bought my my 1969 Mustang.  Good cars that went directly to the salvage yard.

@rsv1cox wrote:and a kid that bought my my 1969 Mustang.  Good cars that went directly to the salvage yard.

Any pictures of the '69 Mustang?

@rsv1cox wrote:and a kid that bought my my 1969 Mustang.  Good cars that went directly to the salvage yard.

Any pictures of the '69 Mustang?

Only good pictures I have of the one I bought for my wife back in 1969 taken from frames from an 8mm movie. 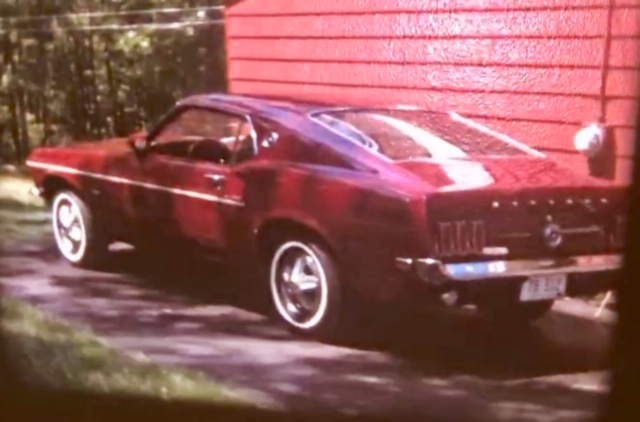 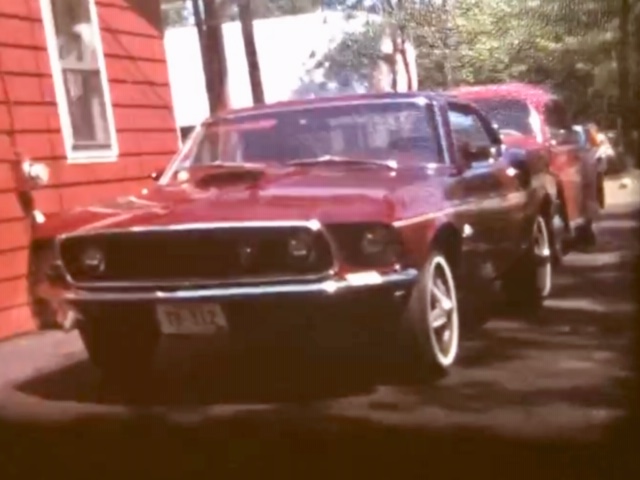 Same car, much later taken just before I sold it. 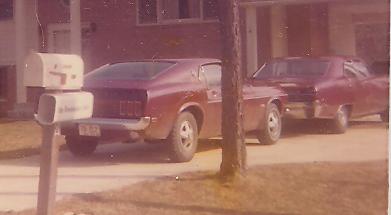 @rsv1cox wrote:
Only good pictures I have of the one I bought for my wife back in 1969 taken from frames from an 8mm movie.

Because I do no want to hijack Eddy's thread, I'll just guess that the model you purchased for your wife was a '69 Standard Fastback. Nice whitewalls with wheel covers and color.

Now back to the original poster Eddy hoping for images of his '68 AMX to be posted.

Any one that can help me to post some pictures here, I still can't figure this out. Maybe I could send to someone as an e-mail and they can post for me Thanks

@Eddy wrote:Any one that can help me to post some pictures here, I still can't figure this out. Maybe I could send to someone as an e-mail and they can post for me Thanks

Sent you my email in a private message to your CoxEngineForum mailbox.

AMC's AMX "American Motors EXperimental" car was one fine design and performer. Tough to hold onto a car all these years. Great job and looking car Eddy!!! 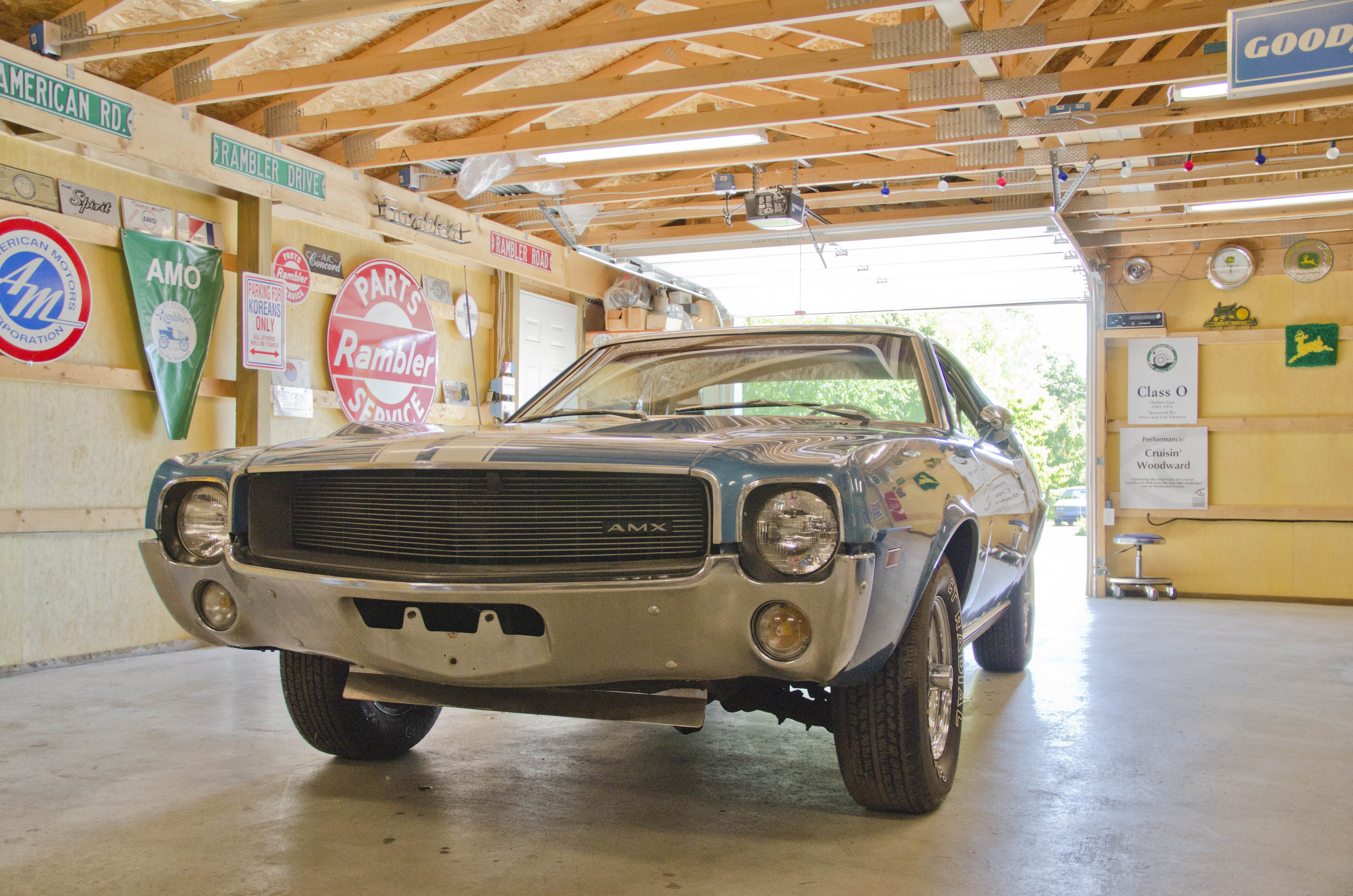 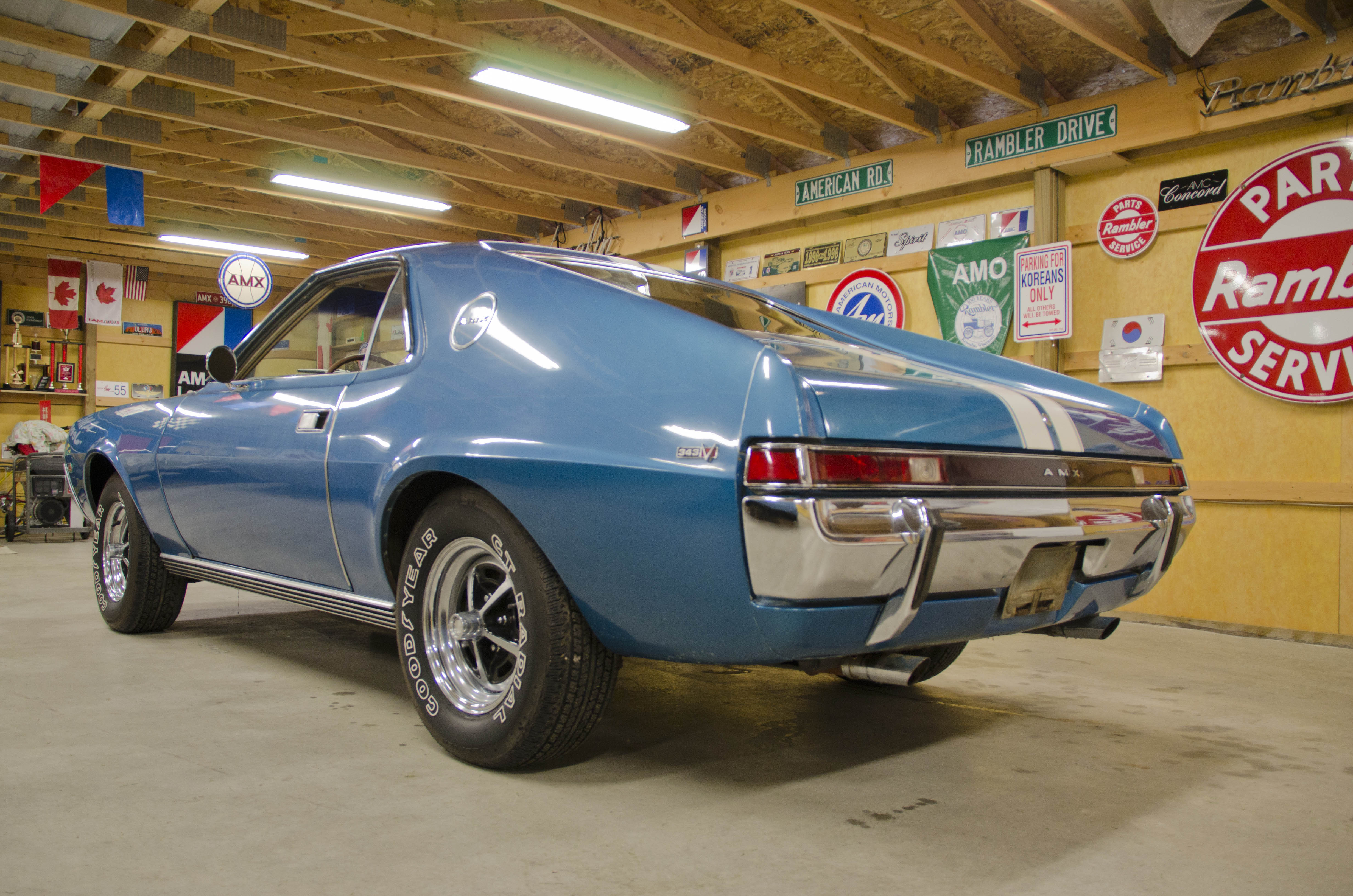 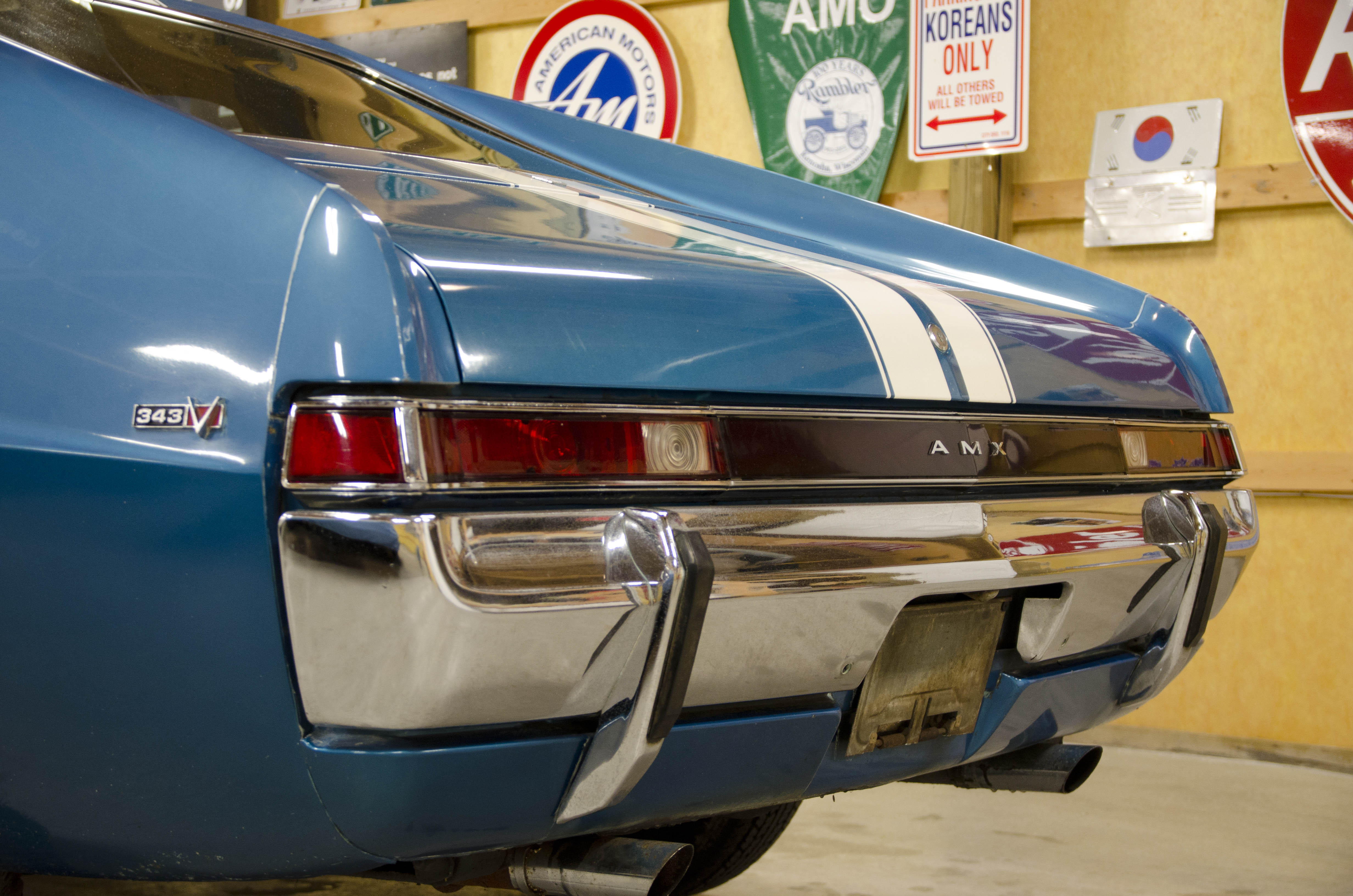 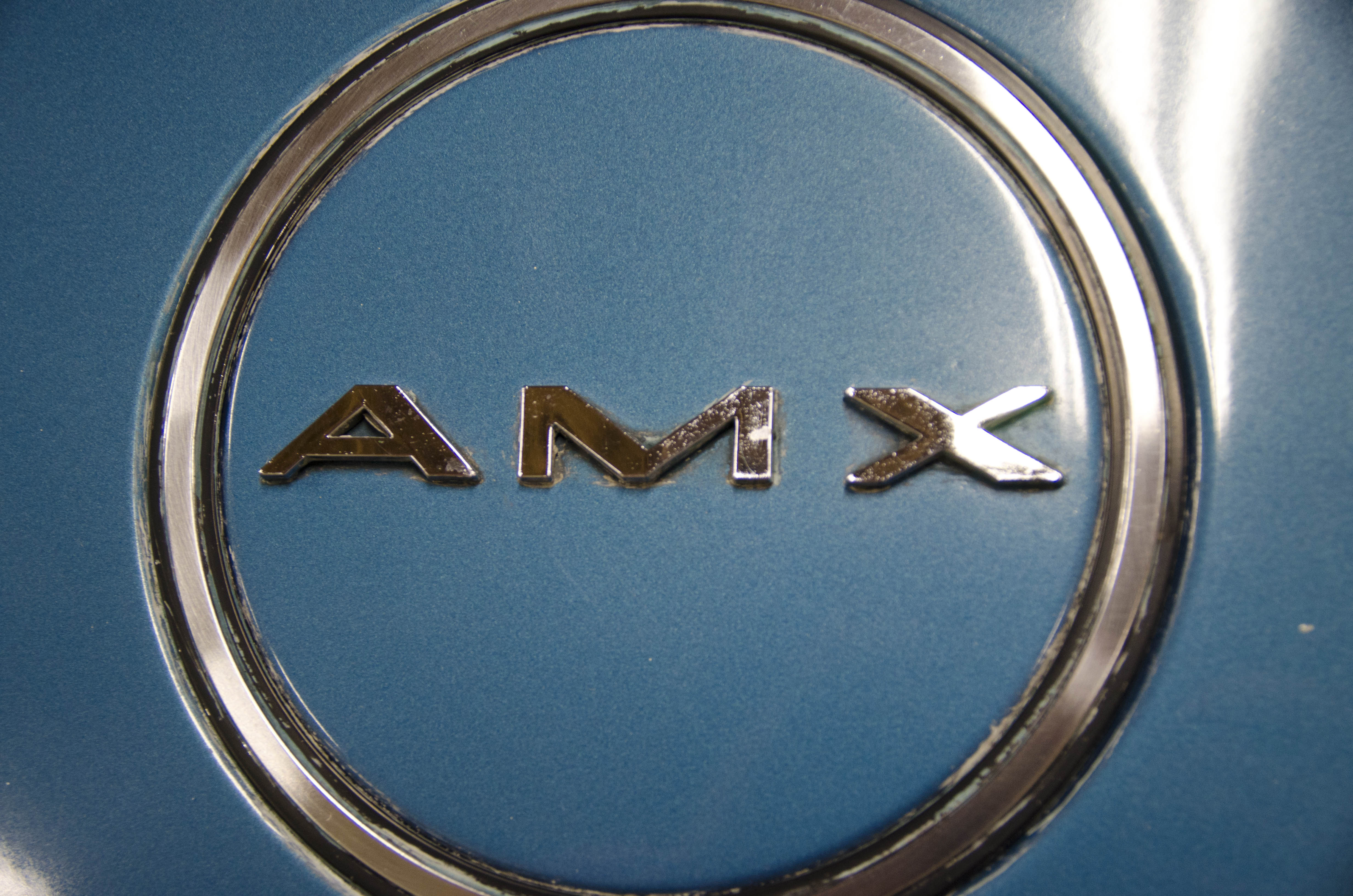 Wow, Nice looking AMX.  You sure have kept it nice. And, by looking at your garage your an avid AMC fan.

Thanks for sharing those pictures.

Beautiful car Eddy! I've always had a soft-spot in my heart for the American Motors brand. They definitely had their cool cars back in the day. We had an AMC dealer in my hometown of Franklin, MA. "Vendetti Motors" was likely responsible for ordering the towns' AMC Matador police interceptors around 1974. Back then; the other popular options were Ford "Galaxy", Chevrolet "Impala" and Plymouth "Fury".

The AMC Matador didn't have a reputation for performance... but the police-interceptor package was formidable.. 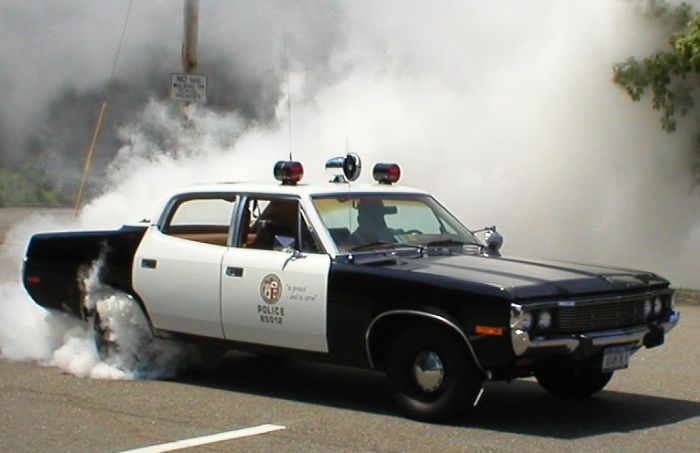 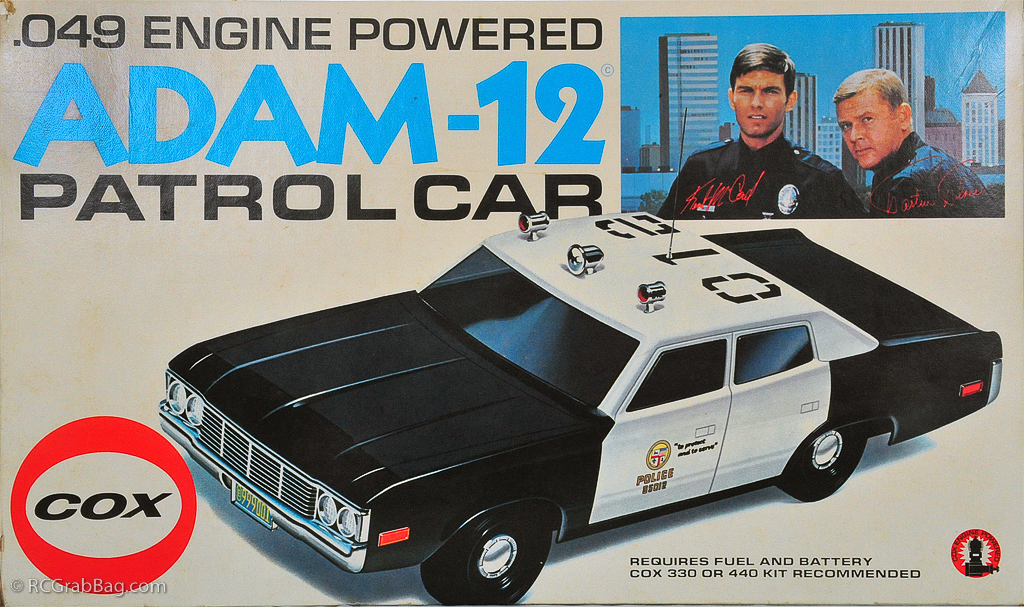 Thanks to all of the great people here, your comments are humbly appreciated, and to Dr. Cox, a personal Thank You for posting my pictures for me, Thank you.  I have one other AMC car, I bought and ordered it new. 1973 Javelin AMX, 401 CI engine, Bog Warner 4-Speed manual, functional cowl induction, most were not fully functional, and that's another story. Thank you all again.