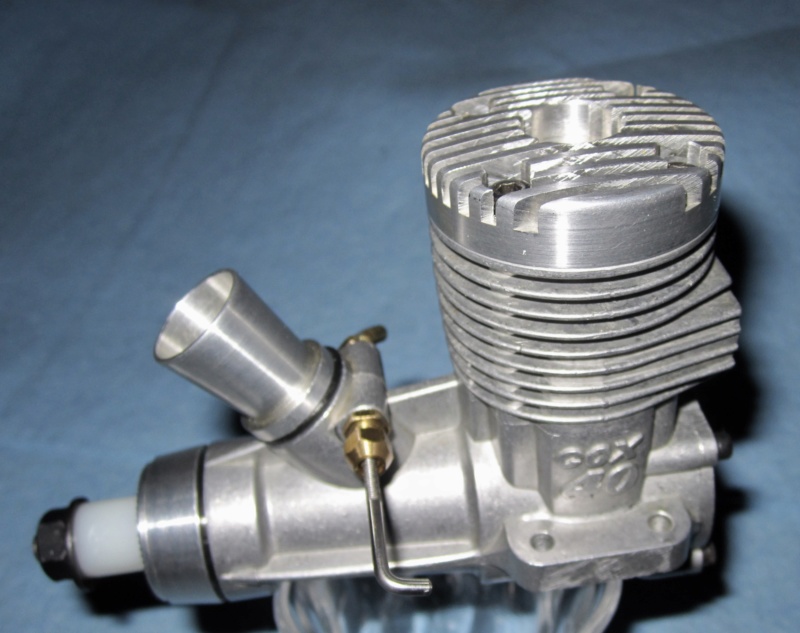 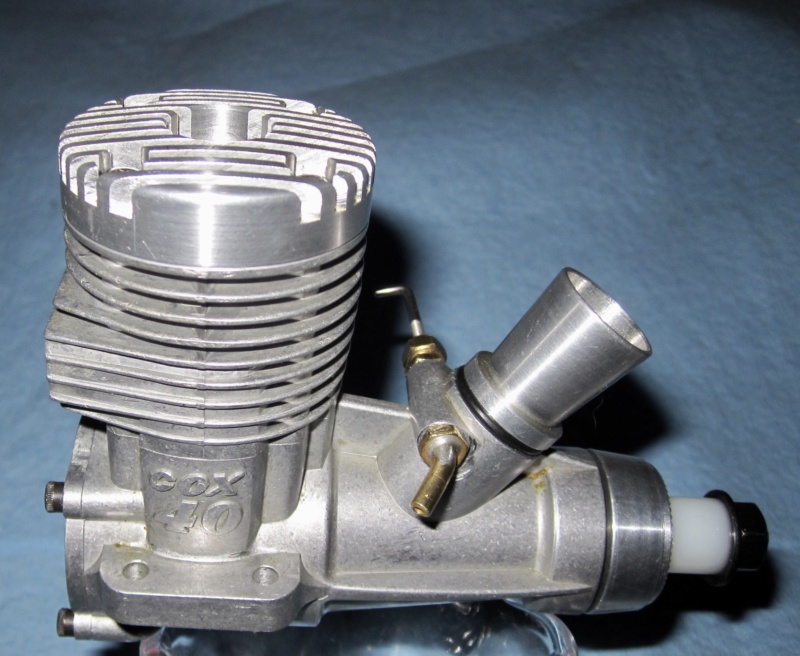 Welcome there LuckLindy!!  here's a little sumthing I ck'ed the Instruction Sheet To the Lf. there
and NO luck

also ... shroll down some ...https://www.mh-aerotools.de/airfoils/cox_frameset.htm

Hi Lindy
Welcome to the forum

Here’s a page from Tim Dannels and Dan Sitter’s “Cox Model Engine Handbook”.
Page 57 is from a chapter entitled” Cox Experimental Engines”. I guess you could presume from that, that production numbers were not very high.
The engine listed ECJ#199 looks very similar to the engine in the picture you posted. 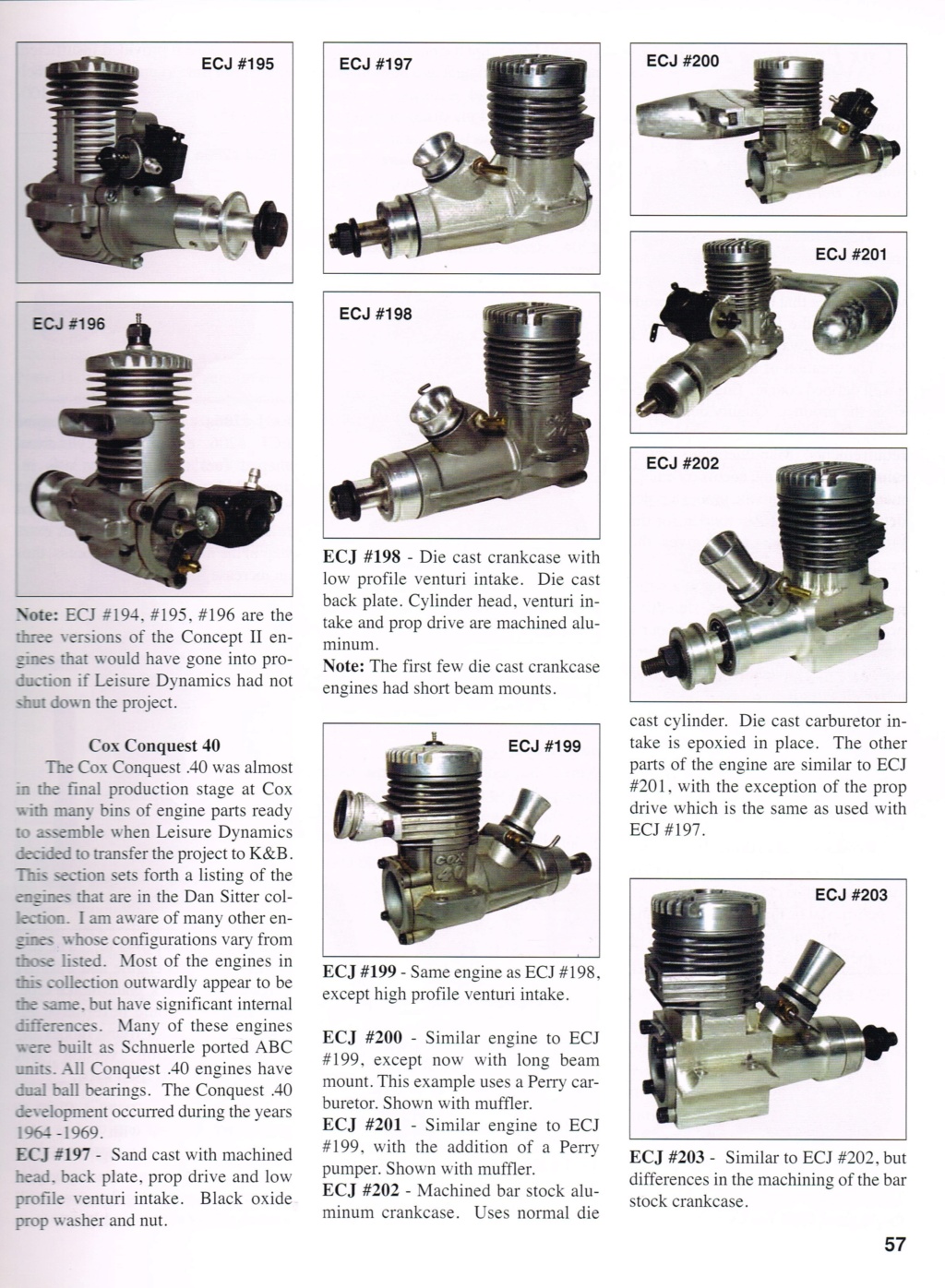 That’s about all I can tell you but there are people on here who are extremely knowledgeable on Cox engines and I’m sure they will be able to tell you what you want to know. 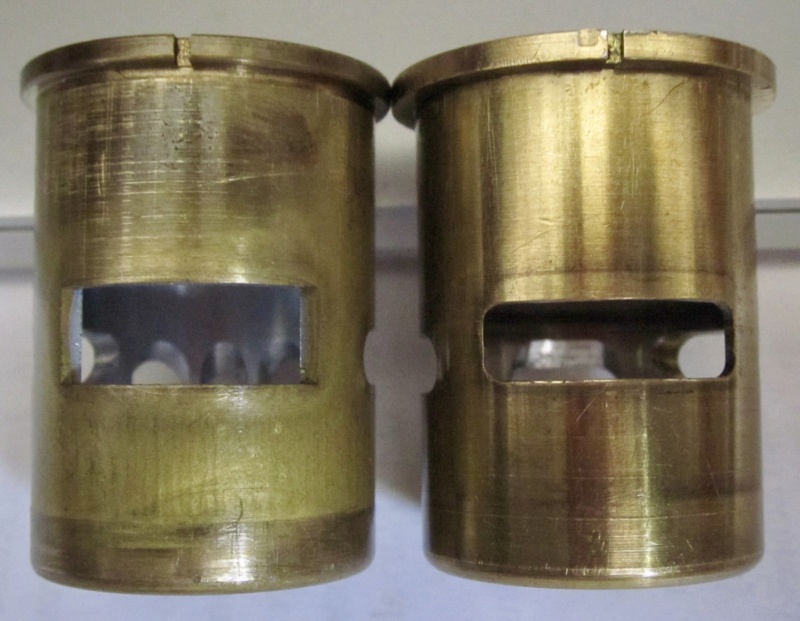 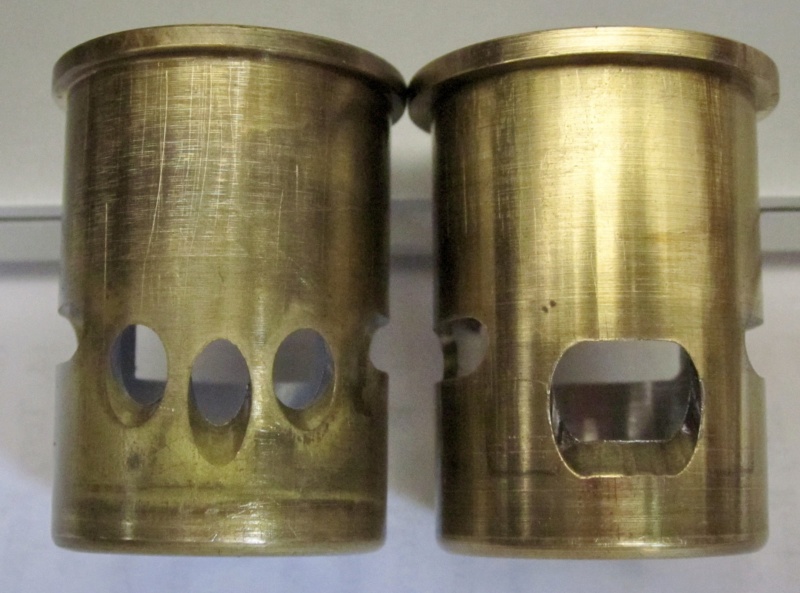 The enclosed photos show the two different sleeves from my Conquest 40's, if anyone out there could give me more information on them it would be appreciated. Could the one with the three (3) holes be for the "speed" engine?

Generally the higher exhaust port timing is more conducive to stunt, I am not sure if that is the case here though. I am only speaking in generalities as any stunt engine I have had altered resulted in a raised exhaust port opening. The 3 intake holes is a schneurle type porting.

Pretty hard to come by engine you have there.

QUESTION: Understand the higher exhaust port "could" be a result of the use of a tuned pipe - anybody remember if Cox used one? If that was the case (used one) - any chance someone out there has a photo of what it looked like and/or info on how long it was. I'm going to be using both engines on free flight models, the rules don't allow the use of a pipe therefore it's just one of those things I would just like to know it it was setup for one. I have not yet run them, when I do will post the results as "stock" then when I get them back with Nelson plug heads and some crankshaft rework will post those. ALSO - the interesting thing is BOTH engines came WITHOUT any gaskets = NONE!

Welcome to the Cox Engine Forum Lucky Lindy . Are you sure that your favorite Cox engine is a .061 ? Maybe the .051Medallion .

lucky.....sorry cuz I actually believe in USE  not collect.....except!!!! truly unique items

your toys sir do as you wish....but an un run COX .40 FIRE*  WOULD BE IN A HERMETICALLY SEALED DISPLAY CASE IF MINE

This is just me ...I have played with Cox engines since 1959...I have NEVER seen the Cox .40 live. I have never know anyone who actually had a Cox .40.... I might be wrong but I don't think so.... you claim to have at least two of them....IMO you are very unique....about as unique at some Cox engine that NEVER went to production....I bet Larry Renger can tell you there were less that 5 of them ever made...

*This attitude brought to you by a guy who is usually astounded by some E-Bay auction prices......yes, every now and then something goes for stupid Bucks that should not..... BUT the truly Rare and Vintage things can and do command very stratosphere prices.....if you do own 2 COX experimental .40s....I think you should maximize your investment....Simply my opinion 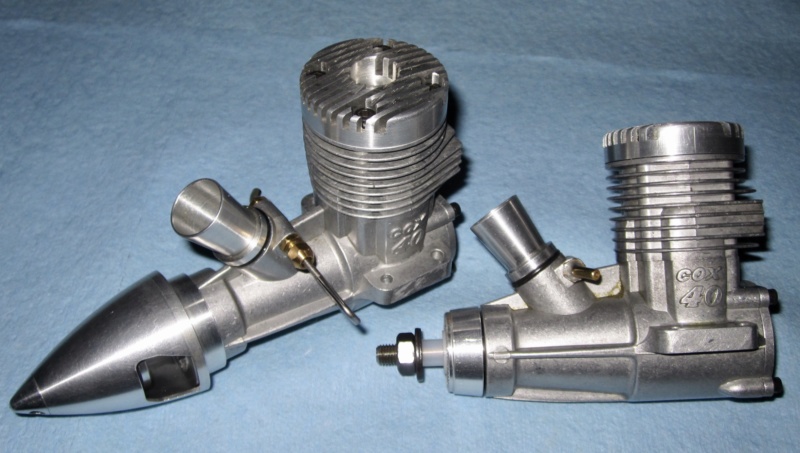 I don't have any "hanger queen engines" - I fly/use them all! I have no way of backing up this statement = I was told there were twelve (12) Four (4) bolt backplate Conquest .40's produced - and yes these would be two (2) of the twelve. The one with the spinner (Nelson) will go on a 788 inch Satellite, not sure at this time what model the other one will power - but they will NOT be put in any kind of case to be LOOKED at. I also fly a Dooling .60 ten fin as well as Dooling .29's - engines were made to be used - not looked at - I respect your opinion - but I own these and will use them as they were designed to do. I would make you this offer = if you wanted to have one for your collection I would sell you one for $3000.00, would even pay the shipping!!

Likewise I solidly respect you option to do as you please with YOUR property.... I am not exceptionally rich (but comfortable)
I would like to relate a anecdote or two....(you opened this door with a asking price of $3K+/-)

You admittedly have 2 of 12 EVER examples of COX high end MFG and Engineering.... there are literally ONLY 9 planet wide citizens that desire EVERY COX product ever built... and 6 of them have the means to accomplish that goal...Yes I pulled these numbers out of my butt

But I digress.... this is purely an economics, and Rare or Vintage Collectable point of view

As 5 kids, we amassed a LARGE (250 or more) cache of comics that took up a lot of room and boxes.... on one Army move, MOM decided to trash Most of the older boxes of comics.....

If you read this far, and do not understand the significance, it is a waste of my time to continue

BUT if you can appreciate the LOSS then you might understand... Dear old mom dumpstered about $200,000...Yes Virginia a complete collection of EVERY superman/Ironman/Hulk/Aquaman/Wonder Woman/ comic is indeed worth very big bucks no matter the condition

In the Army, wife and I saw Mattel Barbie Dolls show up in the post Exchange Every Christmas AS Unique AAFES* only dolls... we religiously bough everyone every year for the asking price of $7.99 to $23.99....some in the collection ar well over $2500 at auction
*Army AirForce Exchange System...known as the Post Exchange or PX

We also invested in Stivers art, Hummel, and LLardo figurines, and a LOT of Dragon crystal figurines....... I actually had to get appraisals of some of our STUFF for the USAA insurance...one of my wifes very simple Dragon with a unique colored stone is over $7500 at auction...we paid $15.99 at the Wiesbaden Post Exchange in Germany

Of course any and all things...stuff....junk..collectables, baubles, jewelry, fast cars, mini bikes yada yada are only ever worth what somebody wants to pay....

Interesting in finding out how much different from the Enya's.