Running out of piano wire….

Running out of piano wire….

I’m rebuilding my electric Flite Streak, and I want to change to a wire 2-wheel setup, but I found I’m out of 1/8 inch piano wire last week.  I was having a crappy day at work yesterday, so at lunch I ran out to the hobby shop.  When I walked through the door, the guy behind the counter gave me a strange look.
“Did you get me email?”
What email?
“I sent you an email five minutes ago.  We have something you might be interested in.”

I have an agreement with the hobby shop to hold any old engines that come in for me to look at.  Even for a crappy engine I’ll give them a couple of bucks, just to keep them interested.  When he went to the end of the counter and pulled out this box, I knew it would be something I was interested in: 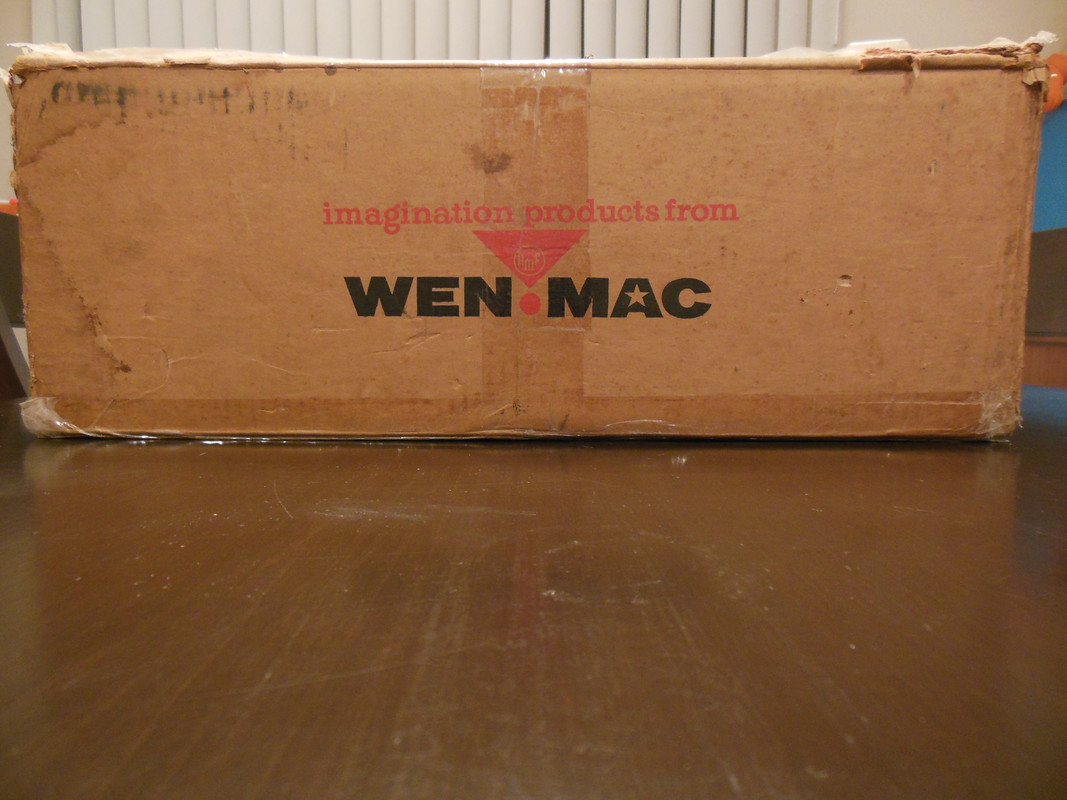 With AMF WEN-MAC on the side of the box, it had to be good stuff in there.  Opening up the box showed this among the packing peanuts: 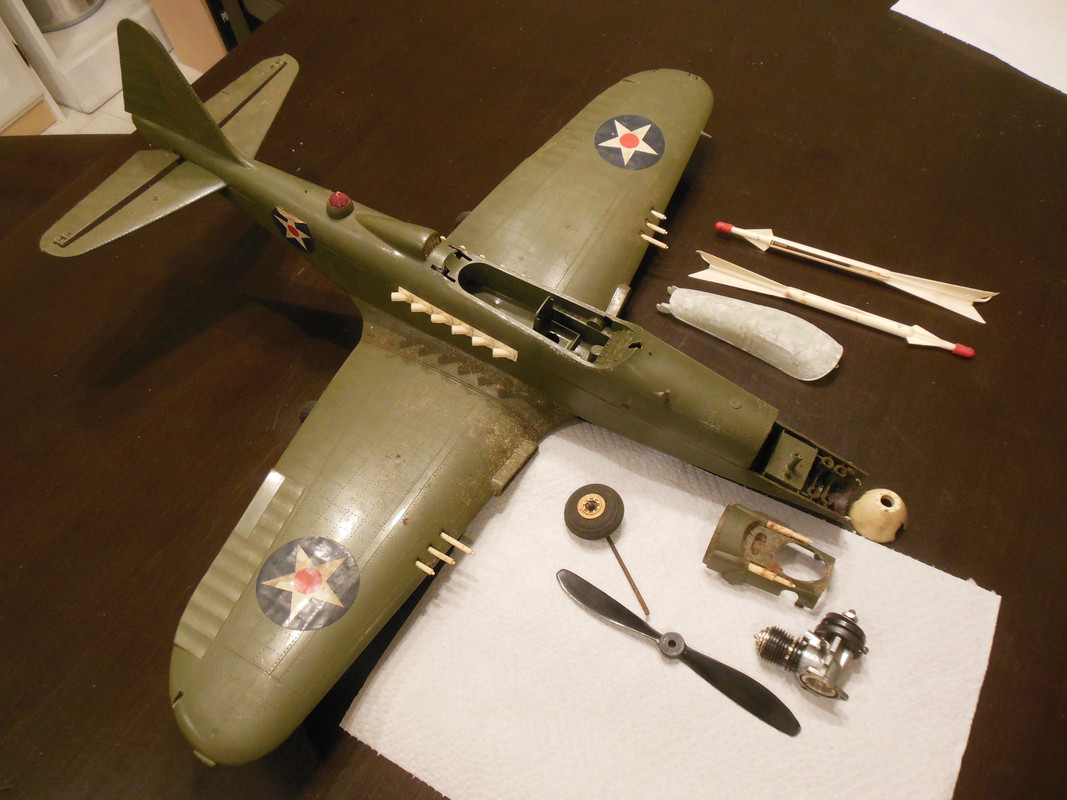 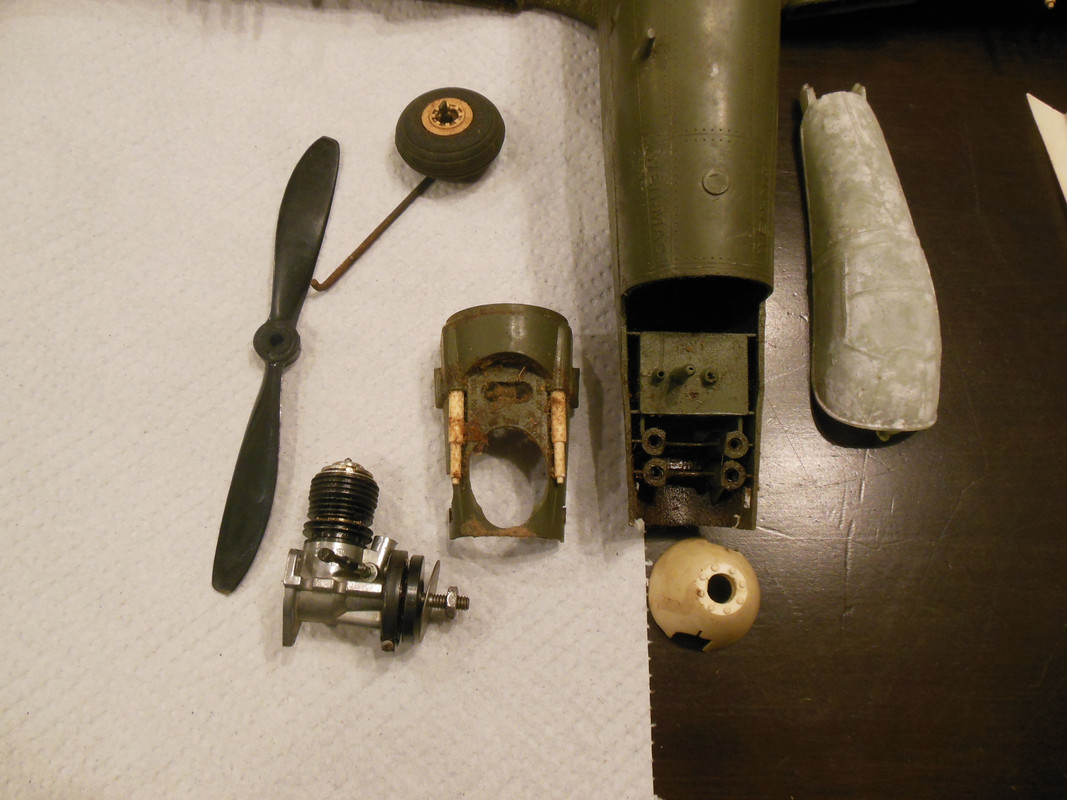 The nose gear is broken so I’ll have to bend up another, and the engine is seized, but it should cleanup nicely.  The canopy has some strange kind of oxidation though.  I think I’ve seen the such before, but that was a long time ago.  I’ll have to figure out how to clean the canopy and restore the original shape to it.  I know I’ve seen a few restoration threads here on these WEN-MACs, so I’ll have to look them up.  Now, just to find an instruction manual to figure out how to make the rockets work.  The prop is one I’ve never seen on a Wen-Mac before.  It’s a 6x4 prop with a more normal shape to it than the usual props I see with the Wen-Macs. 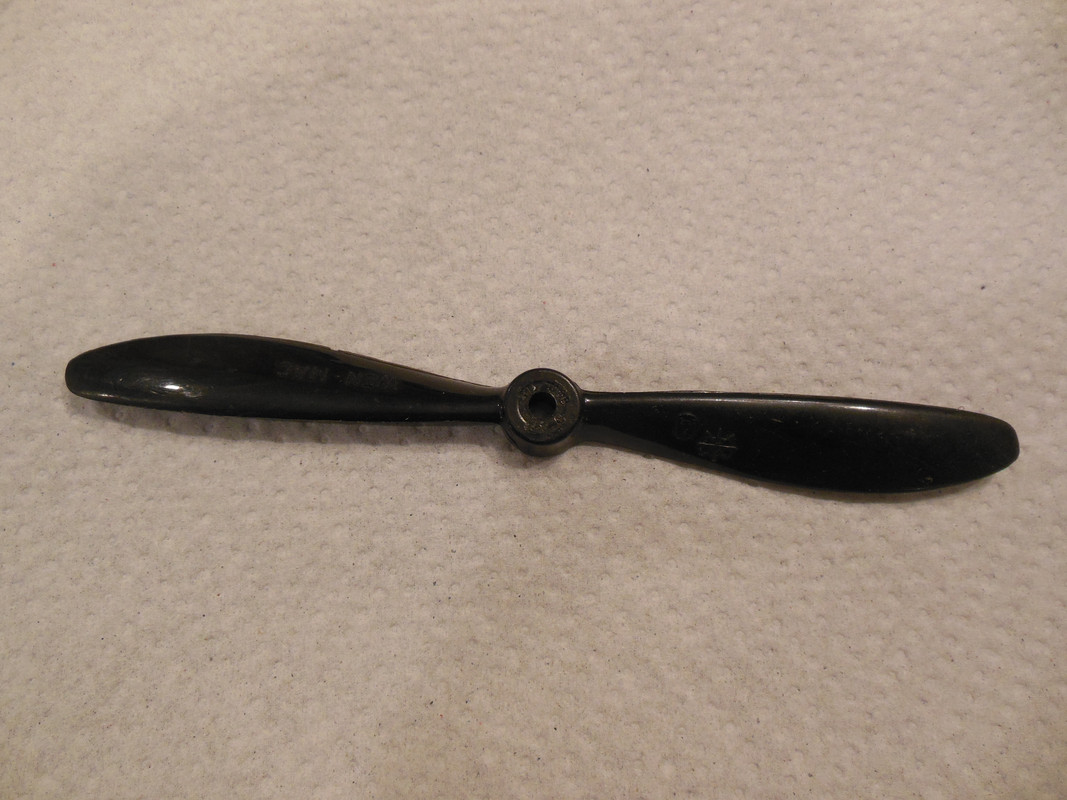 There were also some miscellaneous items in the box.  I don’t think I have this particular Wen-Mac handle, and the custom wood handle is actually quite nice.  The previous owner was using regular cotton string for the plane instead of dacron. 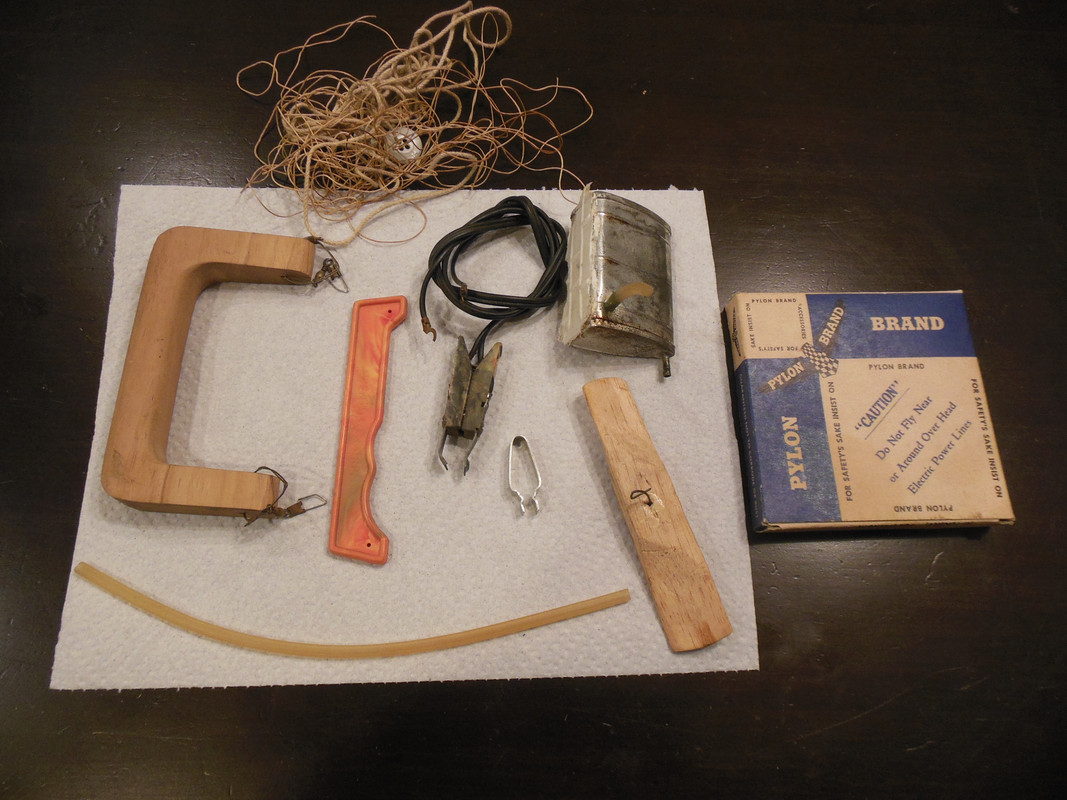 The P-39 was a nice find, but when the counter guy opened the box, there were a couple of pieces turquoise plastic behind the P-39, and my Spidey Sense started tingling.  After looking at the P-39, I set it aside and started digging through the packing peanuts.  Sure enough, it was what I hoped! 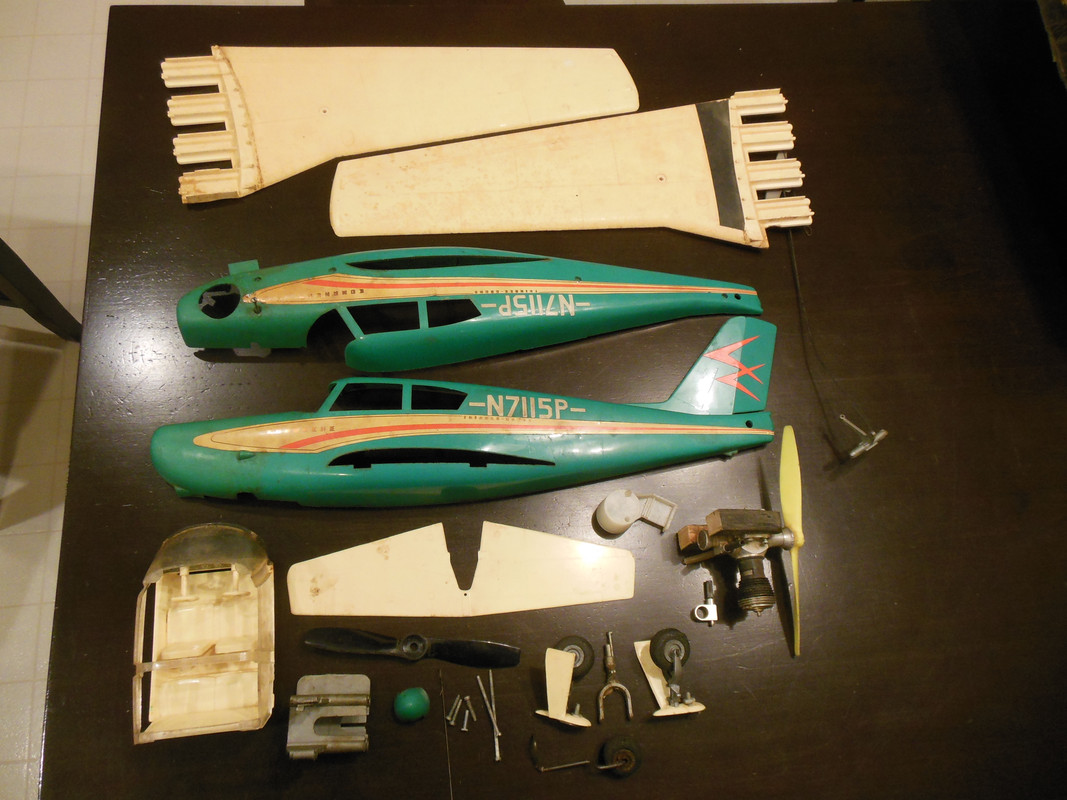 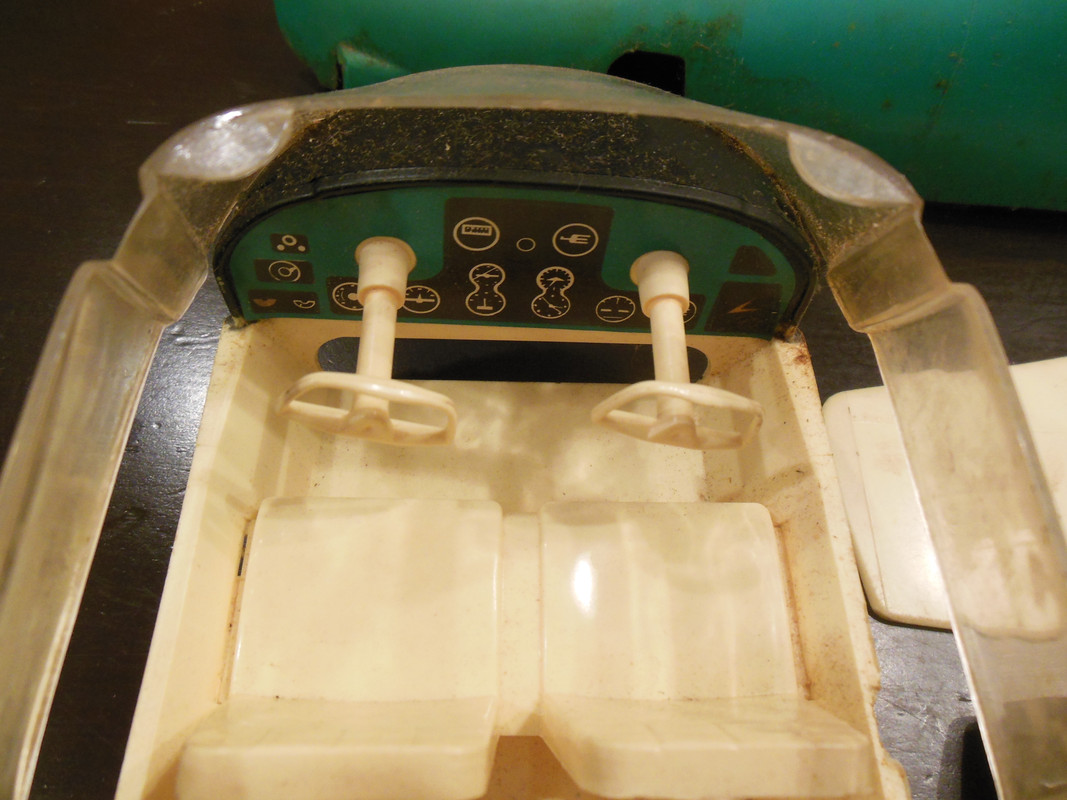 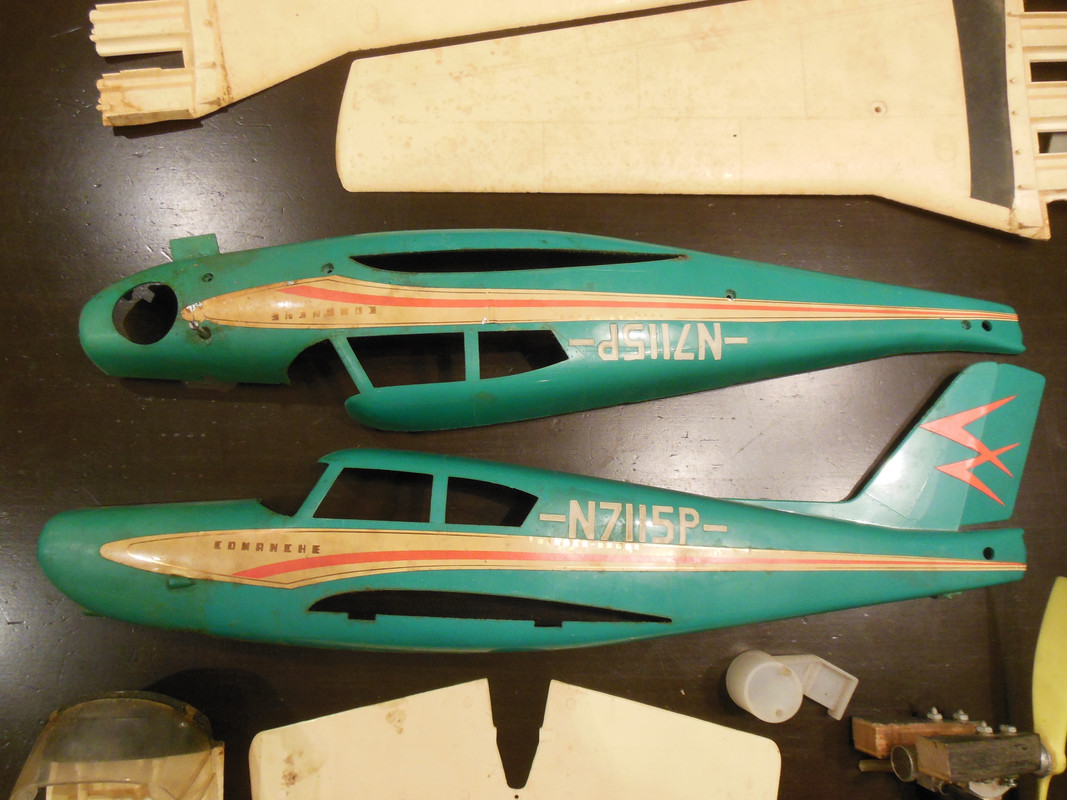 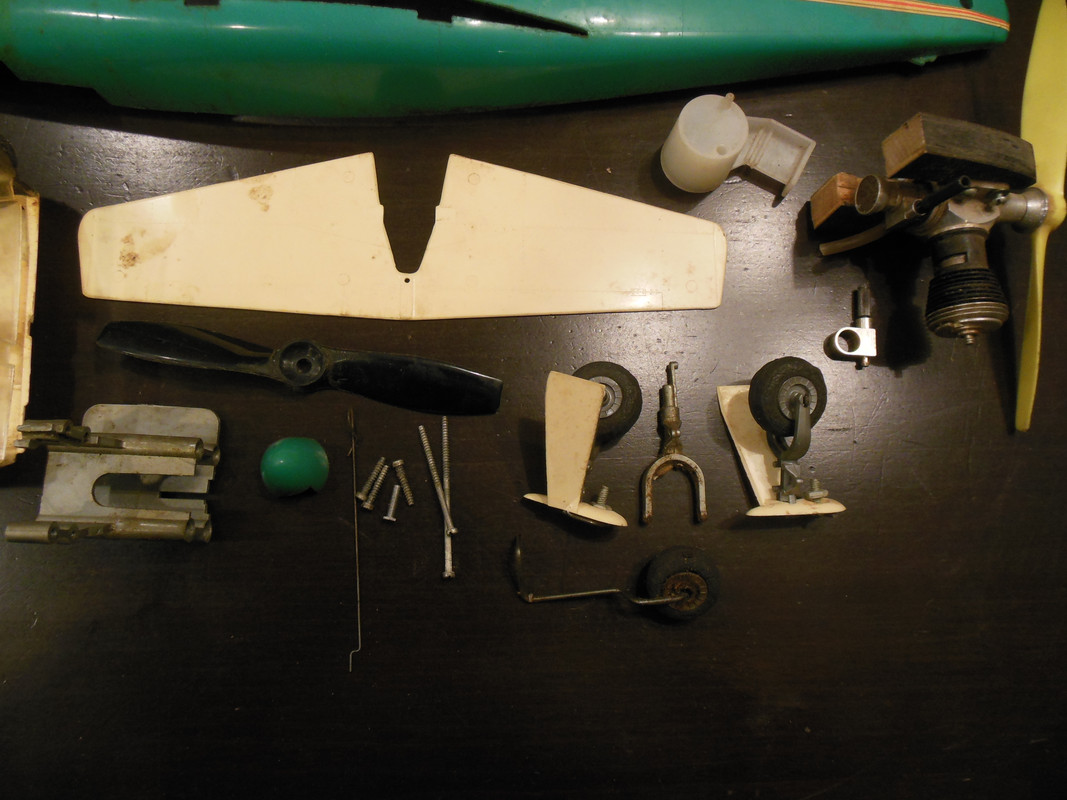 I’ve wanted one of these for years, naturally, but I didn’t want to spend the money they were going for on eBay.  As I was looking through the packing peanuts, I was trying to figure out how many parts I’d have to try to source in eBay to complete this.  After all, a 60 year old plane would be bound to have a few broken/missing parts.  After getting home and emptying out the box, I was amazed.  It’s virtually all there!!!  The only things I can see missing are the hub for the 6x6 prop that holds the spinner on and the starter spring.  My best guess is that the original owner flew it a couple of times and then decided he wanted to use the engine on another plane, so he disassembled the Comanche and put the parts away.

As I was looking at the Comanche, I noticed a crack in the fin.  The counter guy sees it and says, “How about we just call it an even $40?”  “Okay!”  So he yells up to the owner at the front, “We’re saying $40 for the box.”  The shop owner smiles and says “Thank You!”  He was happy to get 40 dollars for a box of junk, and I was happy to take it off his hands.

An interesting note. I just looked up the N-number from the model, N7115P, and it is still actively registered to a 1960 Piper Comanche. I assume the same one that the Cox model was based off of. I think I'll send a letter to the current owner to let him know his plane is famous, just in case he doesn't know.

That’s definitely something to brag about. Good job!

The Comanche is about as good as it gets with Cox RTF’s. Also the Spitfire and TD1/3

Have fun putting that back together. Would like to see it all fixed up!

Interesting that it came with a short needle as a spare, the long one currently installed is correct

I bid on an identical Comanche a couple of months ago that was damaged and incomplete. I forget what it went for but it was much more than what you paid for the whole box.

I love those Wen Mac Airacobras. I have seven or eight. They came with various props including the curious paddle prop. The one you show is the same one that came on my latest Wen AT-6.

The rockets are spring fed, be careful when putting them on the wing. Good luck cleaning up that canopy. Mild warm water dish washer detergent first, then more aggressive measures if that doesn't work. Don't rush it.

Darn good Score Mark , is that Space Hopper what goes in the plane ? Should clean up good and yes do show when done making it pretty !

rsv1cox wrote:I love those Wen Mac Airacobras.  I have seven or eight.  They came with various props including the curious paddle prop.  The one you show is the same one that came on my latest Wen AT-6.

Bob, you wouldn't happen to have the instructions that came with the P-39's, would you? If you could post a scan of them it'd help greatly in figuring out a couple of things on this.

getback wrote:Darn good Score Mark , is that Space Hopper what goes in the plane ? Should clean up good and yes do show when done making it pretty !

Eric, that's not a Space Hopper, though it looks similar. This is a Sportsman, which is a .15 size engine. That's what's extremely cool about this project. It's the only .15 engined RTF that Cox ever sold.

rsv1cox wrote:I love those Wen Mac Airacobras.  I have seven or eight.  They came with various props including the curious paddle prop.  The one you show is the same one that came on my latest Wen AT-6.

Bob, you wouldn't happen to have the instructions that came with the P-39's, would you?  If you could post a scan of them it'd help greatly in figuring out a couple of things on this.

If I do Mark, I can't find it. Went through all my stuff even the NIB example that I have to no joy. But I will keep looking.

Heck thats even cooler Sportsman is user friendly and got power !!

Holy moly , I need to go buy some piano wire

That is a wonderful deal you got.

I think you enjoy the collector value the most.

The Wen Mac Aircobra was the second plane I had as a kid.

They are very heavy and extremely under powered,
if you are thinking about flying it you probably need to put a .15 size engine in it!