Log in
Search
Latest topics
» This evening's Ale!
by rsv1cox Today at 5:38 am

» Cylinder Porting
by coxaddict Today at 5:23 am

» Mail Delivery vs Covid 19
by GallopingGhostler Yesterday at 2:57 pm

Can someone please confirm, was the Curtiss Hawk the forerunner to the P-40? They look very similar apart from the radial engine.

Oldenginerod wrote:Can someone please confirm, was the Curtiss Hawk the forerunner to the P-40?  They look very similar apart from the radial engine.


“DescriptionThe Curtiss P-40 Warhawk is an American single-engined, single-seat, all-metal fighter and ground-attack aircraft that first flew in 1938. The P-40 design was a modification of the previous Curtiss P-36 Hawk which reduced development time and enabled a rapid entry into production and operational service. “.  Wikipedia

Looking up the P36:
With around 1,000 aircraft built by Curtiss itself, the P-36 was a major commercial success for the company. It also became the basis not only of the P-40, but two other, unsuccessful prototypes: the P-37 and the XP-42.

I really like what you have done, the change from electric to glow. His model works wonders.
Could you please comment, what servos do you use and what battery on board?
Thank you very much, I congratulate you!

Two cheap 5g servos (Tower Pro or some other generic (off-)brand), a 120mAh 2s LiPo battery and I use my "3 diodes in series" voltage regulator to drop the battery voltage by approx. 2V before feeding it into the receiver.

Oldenginerod wrote:Can someone please confirm, was the Curtiss Hawk the forerunner to the P-40?  They look very similar apart from the radial engine.

This doesn't necessarily mean companies just take an existing airframe and shove, a more powerful engine on it and call it a new type of airplane (well, they sometime also do that as well

How much of the P-36 was actually reused on the P-40 - I don't know, I wouldn't trust Wikipedia on this unless there's a good source quoted.

dirk gently wrote:Two cheap 5g servos (Tower Pro or some other generic (off-)brand), a 120mAh 2s LiPo battery and I use my "3 diodes in series" voltage regulator to drop the battery voltage by approx. 2V before feeding it into the receiver.

Thanks for answering.
You tell me that you use a BEC then, or that your own voltage regulator is manufactured?
In my case I use a direct battery of 3.7 volts and 250 mha, and I carry 3 Turnigy 1440 micro servos, Ailerons, motor and depth, (no steering wheel), that allows me two flights of about 8 minutes each safely, then of that I have to recharge the battery.
The RX below 3.5 volts are reset, therefore I am interested to know if your regulator is manufactured by you or is a commercial voltage regulator. From already thank you very much.
Due to the speed and effort that the servos do, this model of the small ones that I have is the one that consumes the most battery in flight.
Here is a video of my model of which I speak, greetings: 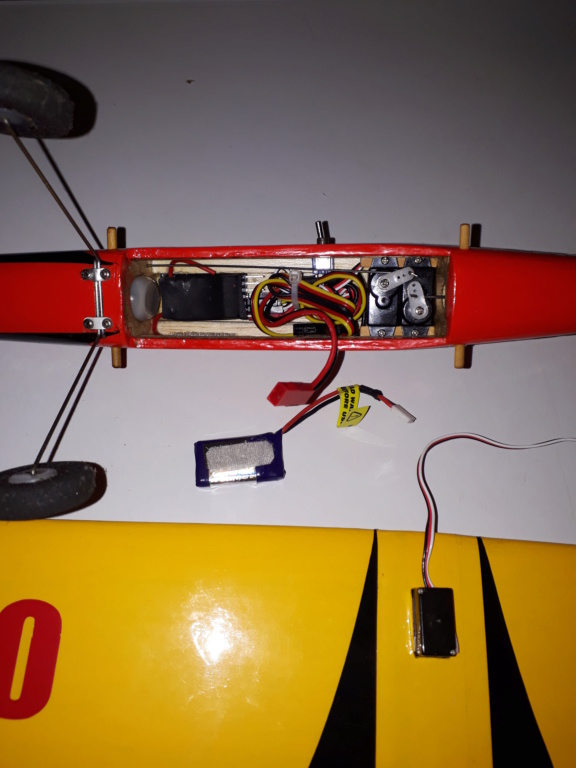 I literally just use two (or three, depending on the receiver's rated voltage) 1N4007 silicone diodes in series with a JST plug on one side and a servo plug on the other. Each diode provides around 0.7V voltage drop, so for example 3 diodes drop the voltage from 8V to 5.9V.
I described this method on this forum years and years ago, and for the life of me I can't find the topic now.

Thank you very much for that information, that is, you can make your own voltage regulator according to your needs.
I will consider this data. Thank you!!...

BTW, I also used a home-made regulator based on the TL7805. That works ok, providing 5V@1A, but the weight is comparable to a cheap 6AMP brushless ESC, a bunch of which I happen to have laying around. I can use the BEC of an ESC like for notro flying. I'm not sure it provides continuous 1A though, but it seems to work alright for small models.