Moving day for the display cabinet

Moving day for the display cabinet

As good as it's gonna be.

I tried to find suitable maple veneer for the damaged front but could only find veneer with a horizontal grain not vertical as original, and none with the same shade.  So having a piece of luan mahogany on hand I used that.  Sanded the whole cabinet down and stained it pecan with poly.

This thing is heavy, think very heavy.  Thankfully Mark and I did not have to hump it into the basements far end room.  The cart just made it through the door and down an angled hallway. 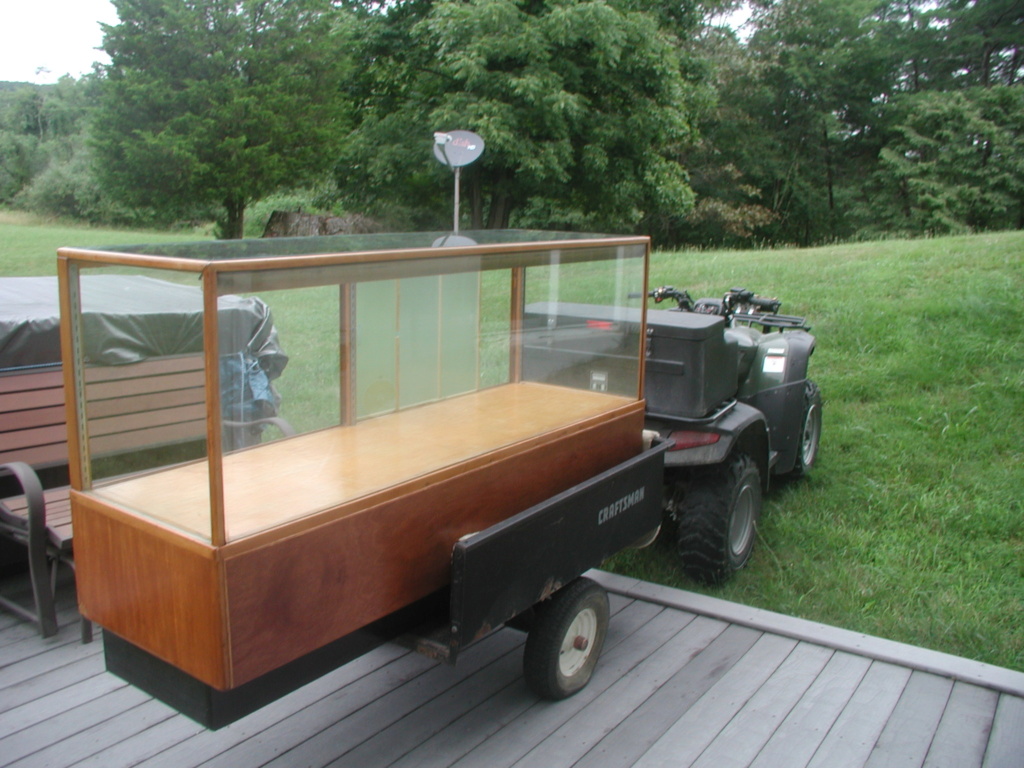 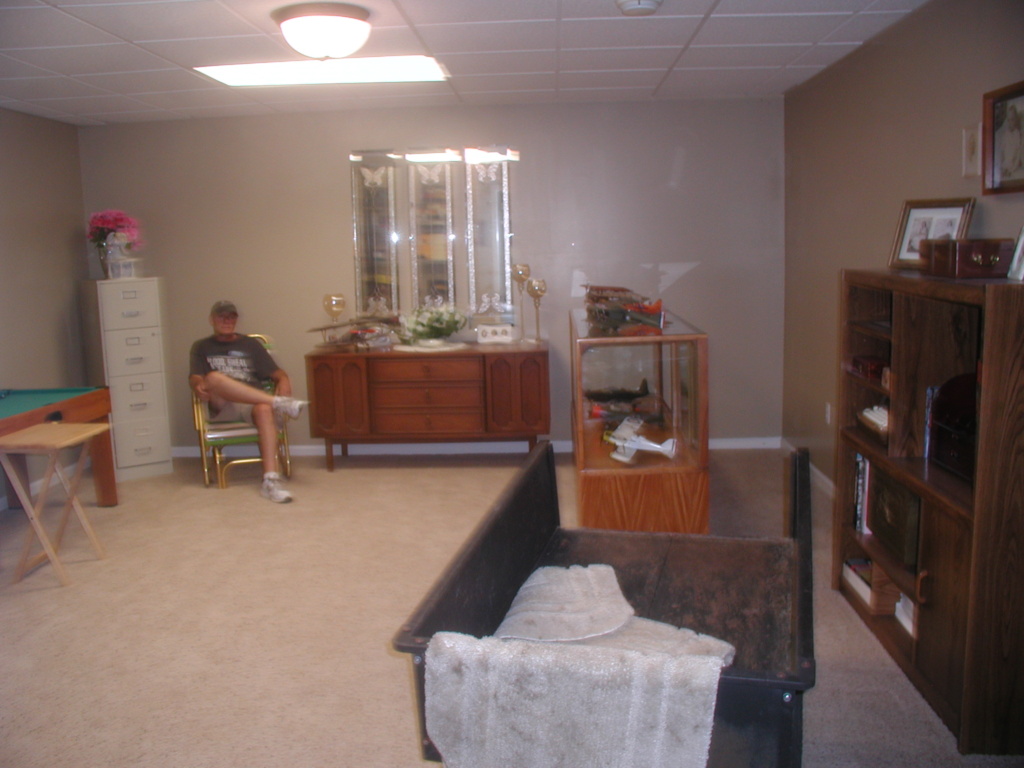 It's a start.  Still have to add a middle glass shelf.  The hardware came with it but not the glass. 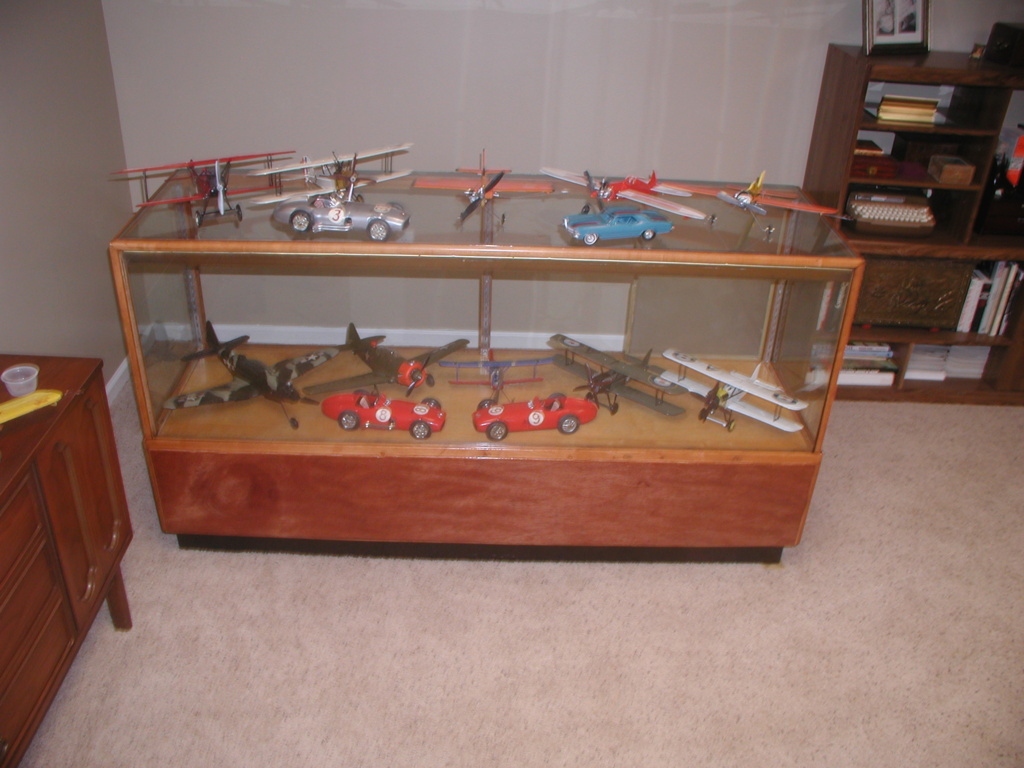 Rewired the module for the fluorescent lamps, doesn't work.  Could be the ballast, transformer, or starters.  Don't know.  Might stick a more modern unit in there.  Made a cover for it from an old VCR case. 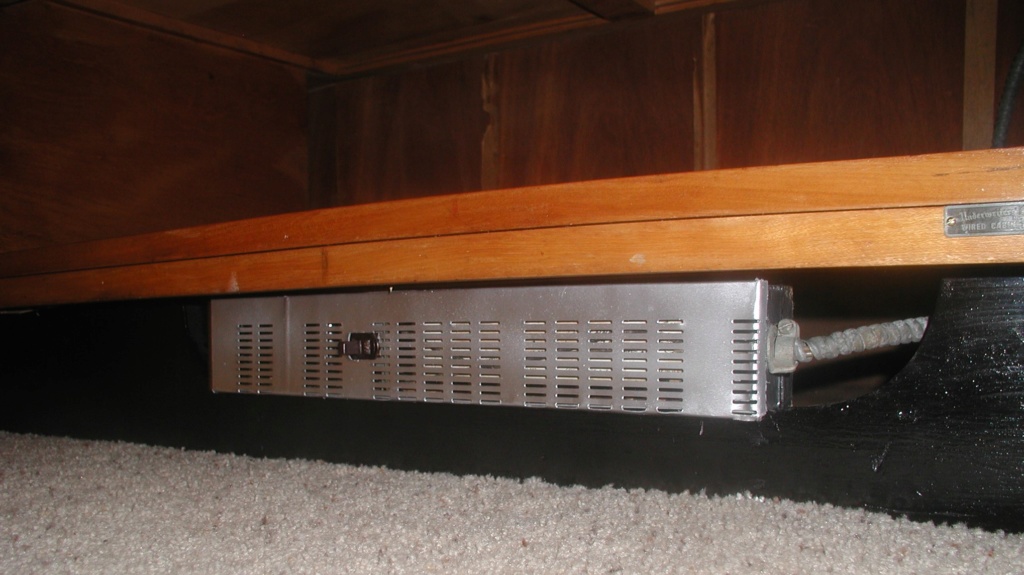 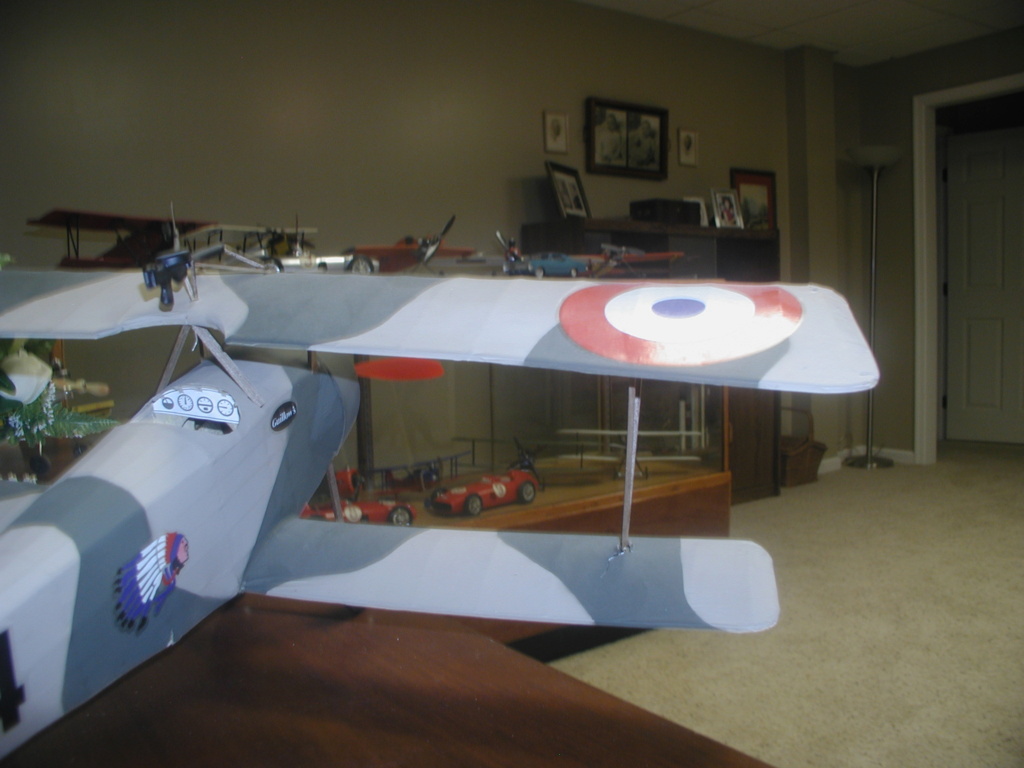 What a splendid case and a marvelous collection to fill it.

Thanks Bill. Long way to go. Thinking about some sort of wall mural behind it, WW1 fighter or something similar. I have seen a mural above a ceiling fan showing a F4U Corsair blasting out of the ceiling that would be marvelous, but I can't find it at the moment.

When I got it, there was this little wind-up guy (far end of picture) that came with it. Reminded me of the Aurora Bird-dog that came with a little guy from a cereal box. Ron or somebody here ID'd it. A good omen. 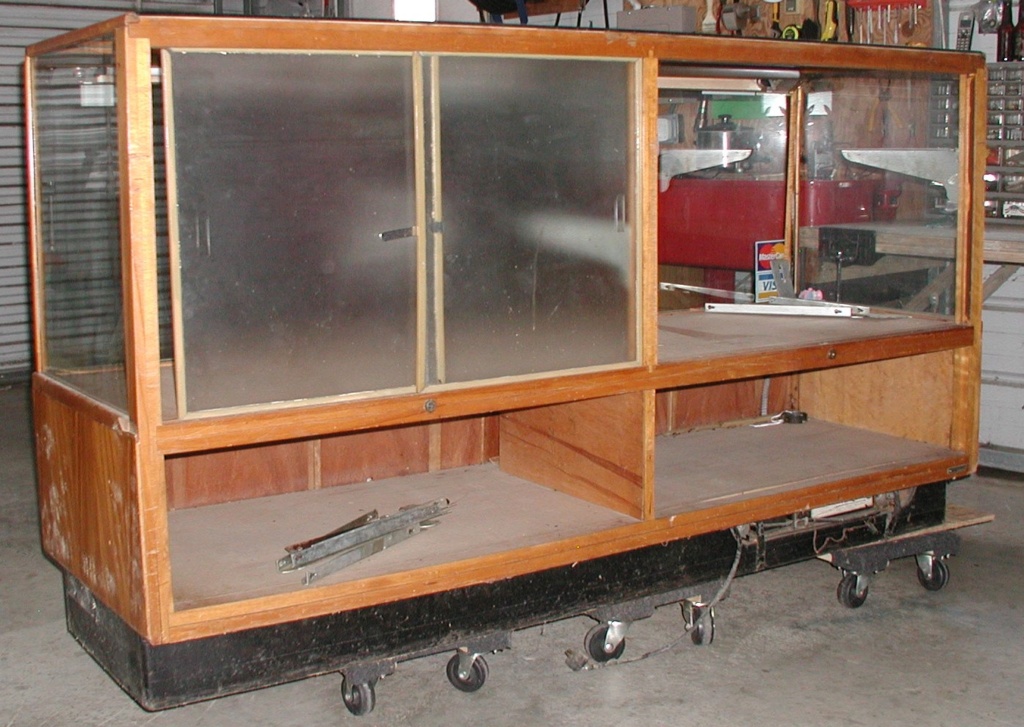 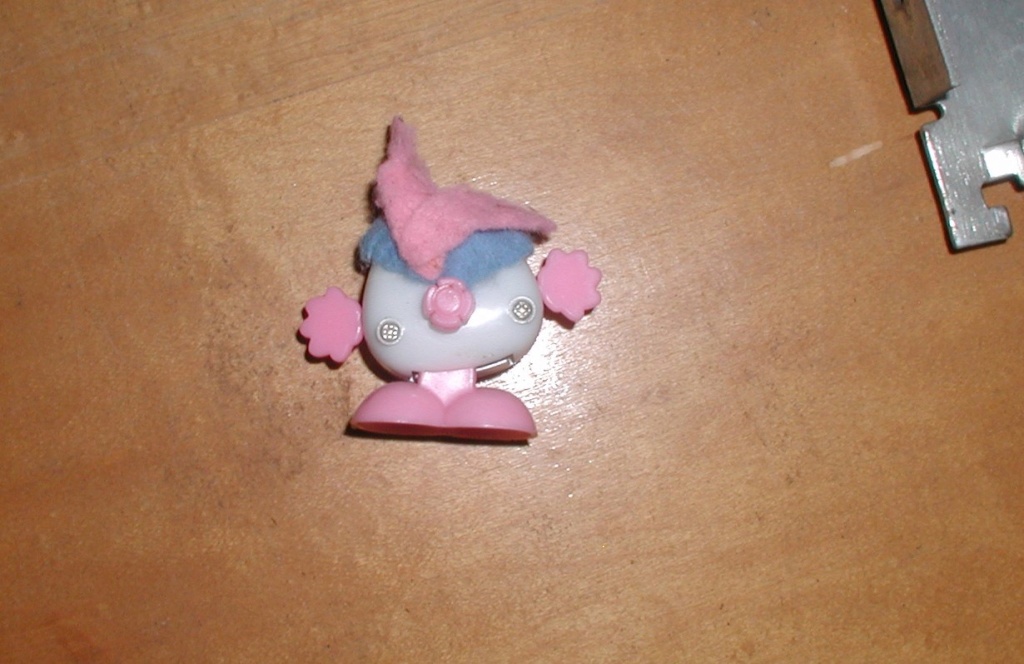 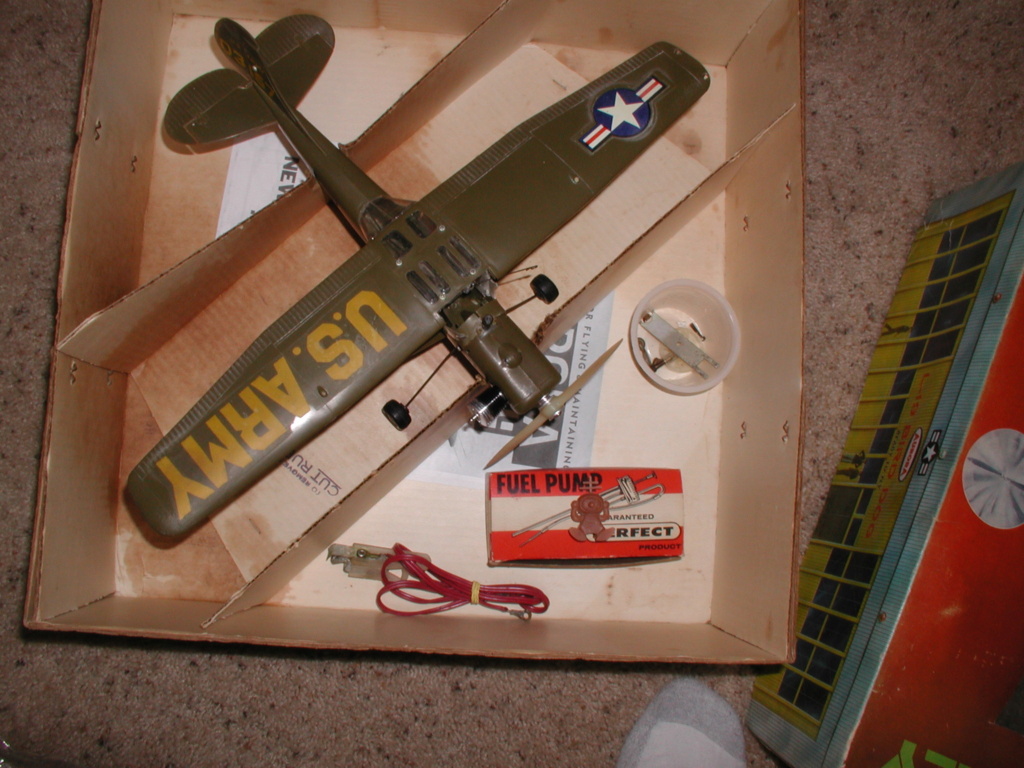 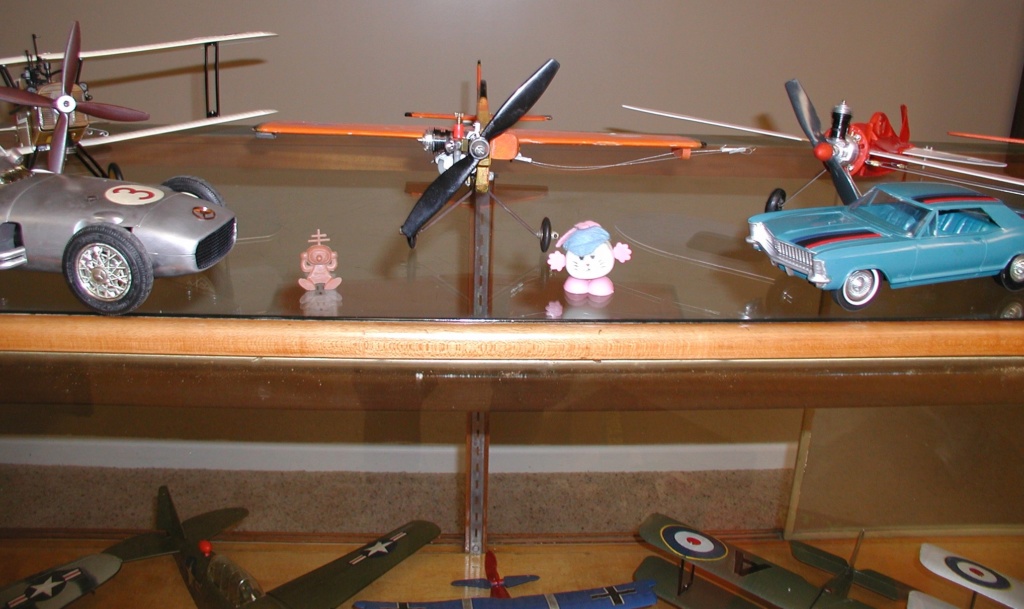 I'll move this room around five times before I'm satisfied and the cabinets contents probably more than that.

Wouldn't quite make it through the door Eric.

Mark guided while I pushed the cart.

Cut a piece of luan for a temporary shelf. 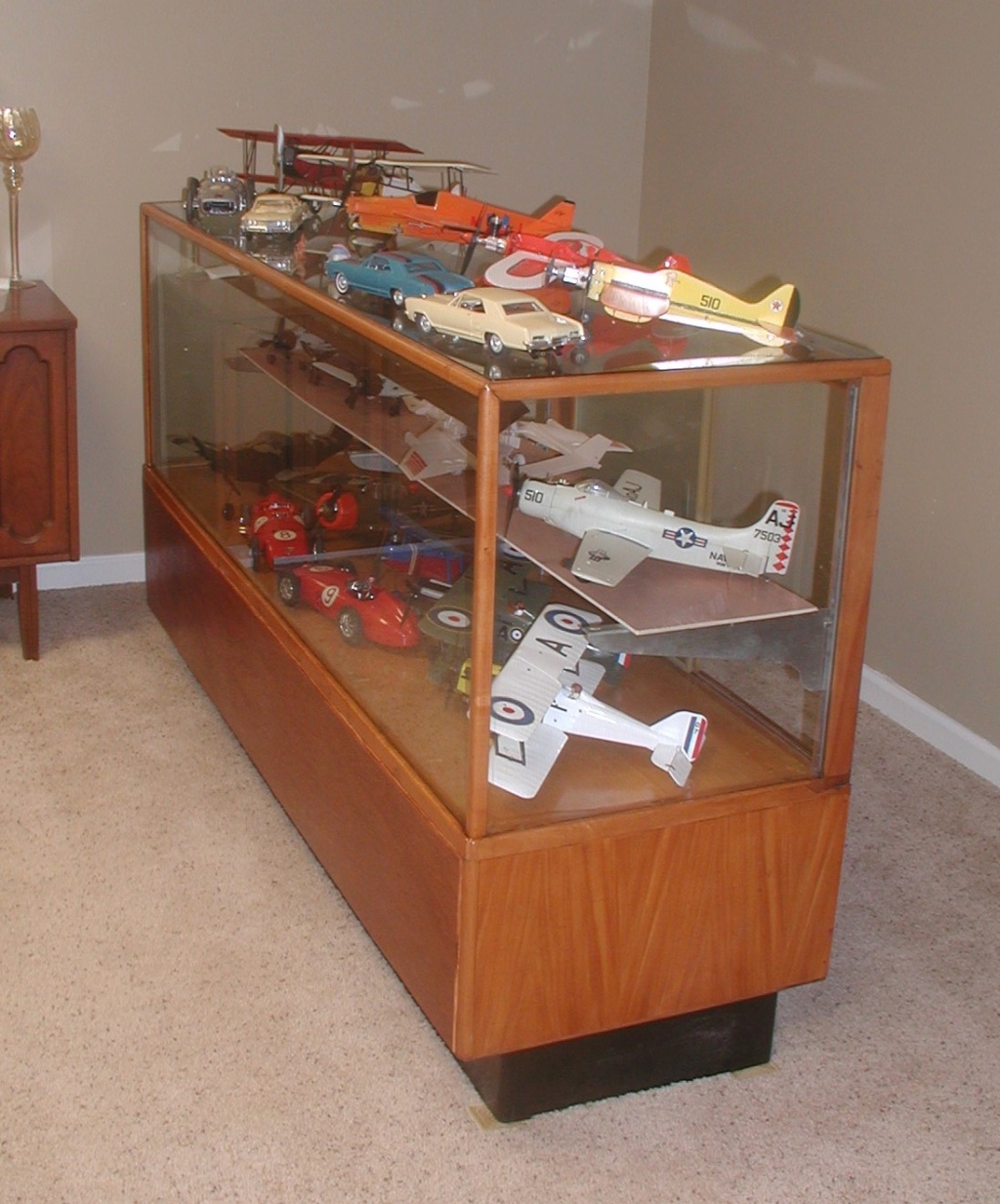 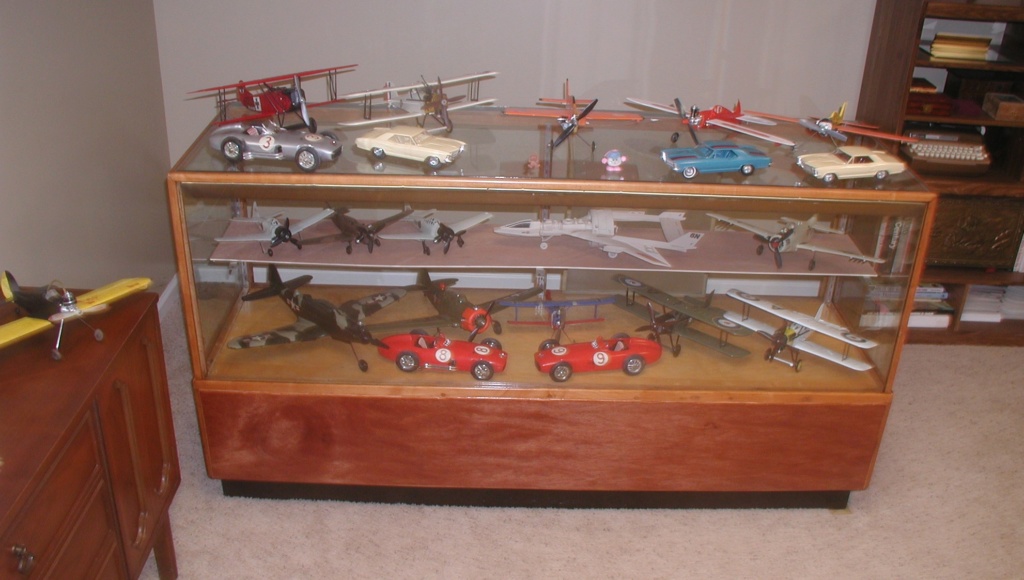 That came out nice! The VCR box cover looks original.

How many and what size lamps does it use? In my opinion, I'd stick with fluorescent lamps just for that original look. Although LED retrofit tubes are getting better.

Great job with the display case. That's the way to safely display those pieces of history. However, the Rivieras seem to be missing something. Can't quite put my finger on it.

Great job with the display case. That's the way to safely display those pieces of history. However, the Rivieras seem to be missing something. Can't quite put my finger on it.

A job for my son with his steady fingers.


Two different sizes Jacob, 18 and 36".  Neat way they install, just push in straight until they snap, no twisting.  Little levers at the ends when rotated pop them out.

I think they attached the light bar with adhesive or double sticky tape.  Nothing there to screw or nail into other than glass.  I tried to take the whole assembly out but never got to first base.

Little guys had to give up space to the Corvette and Automite.  But they are still in there.  Has hangar's too. 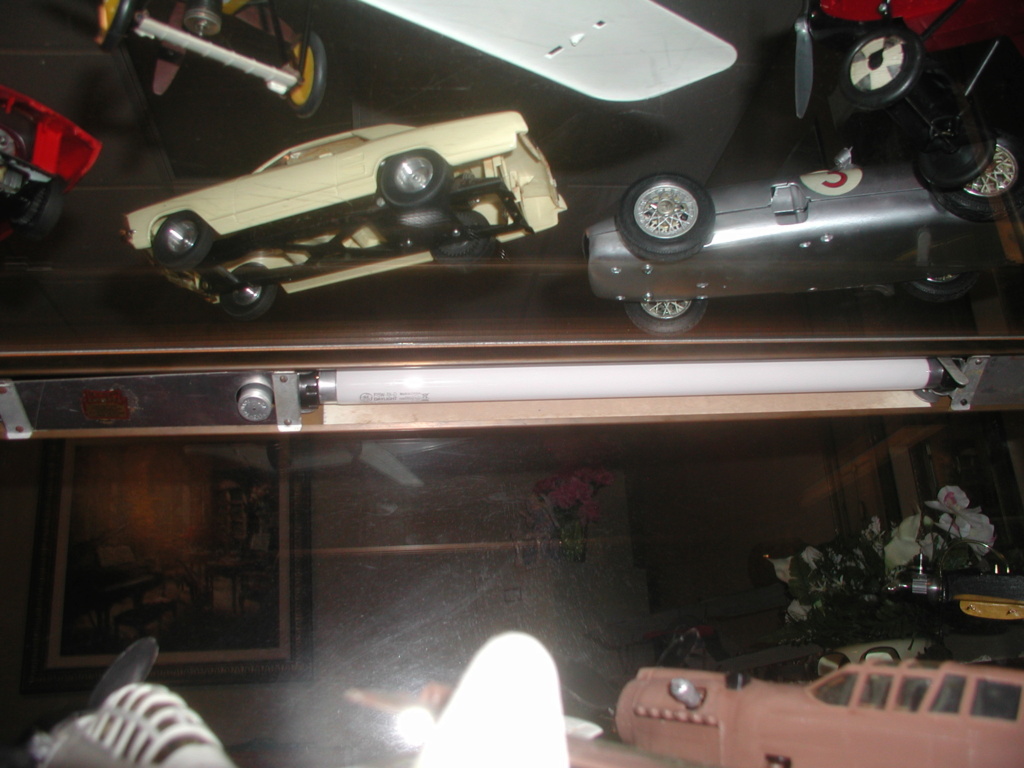 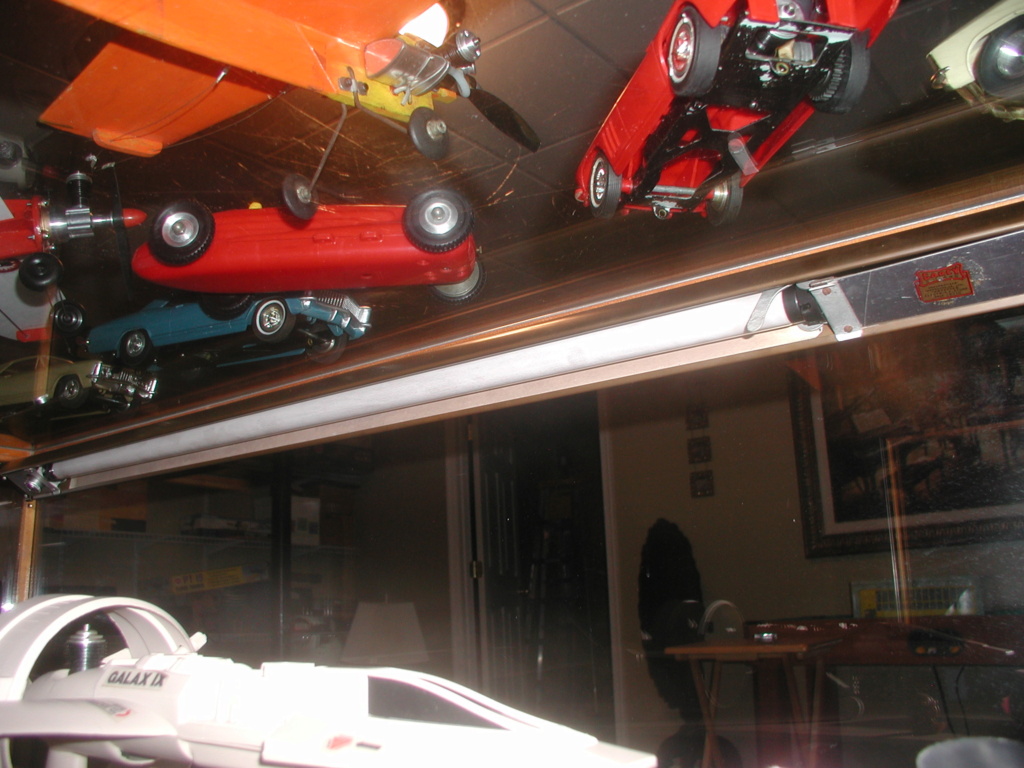 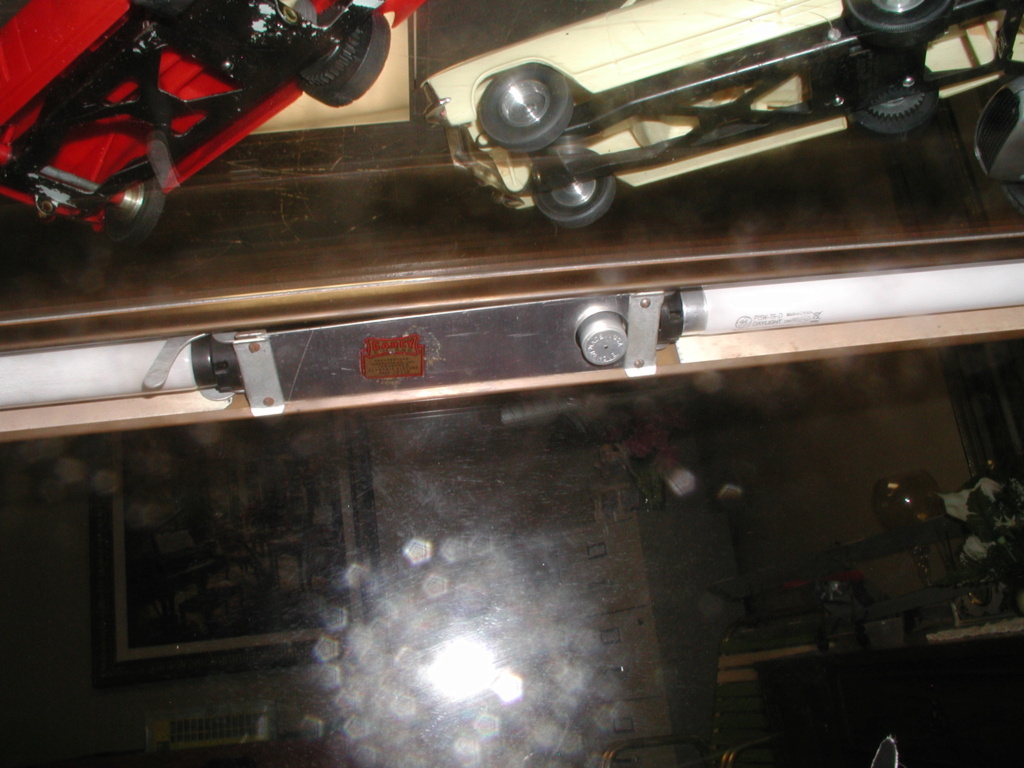 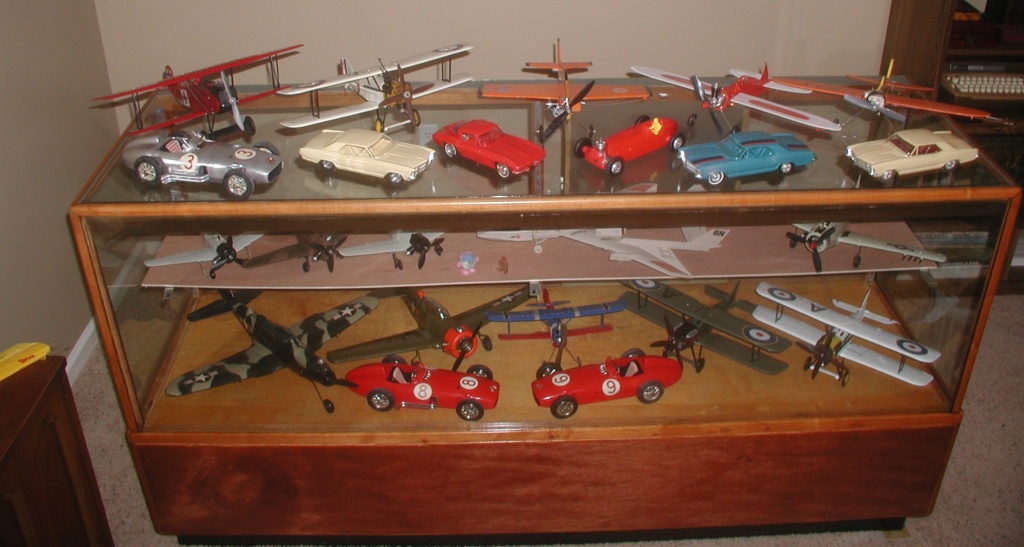 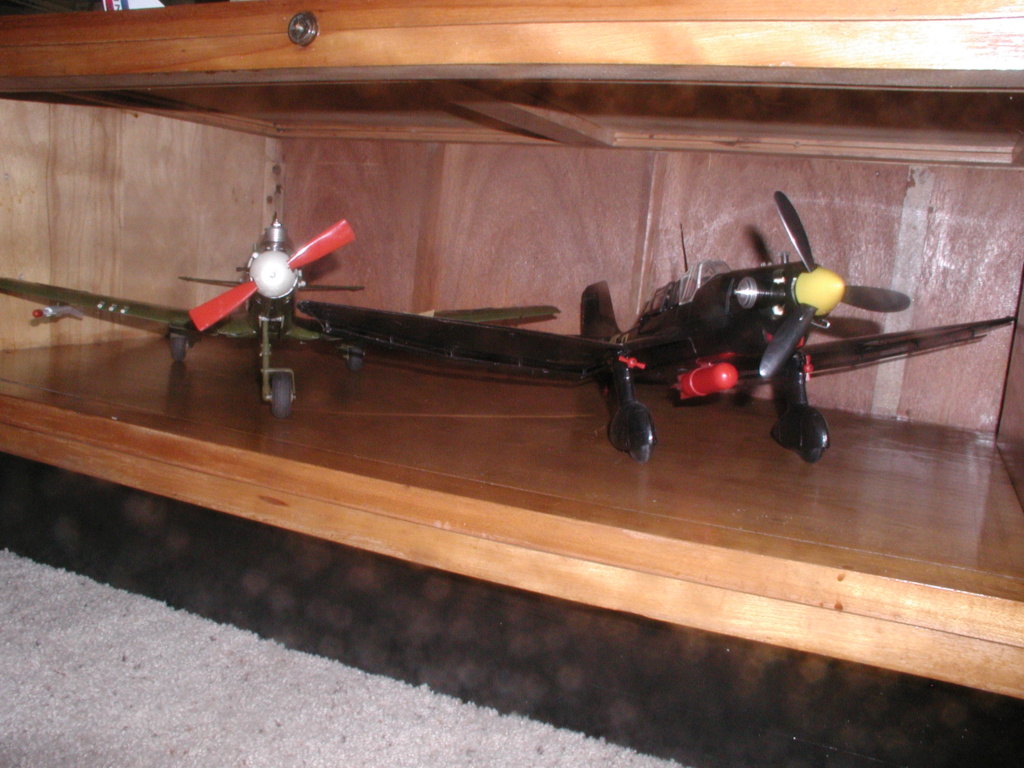 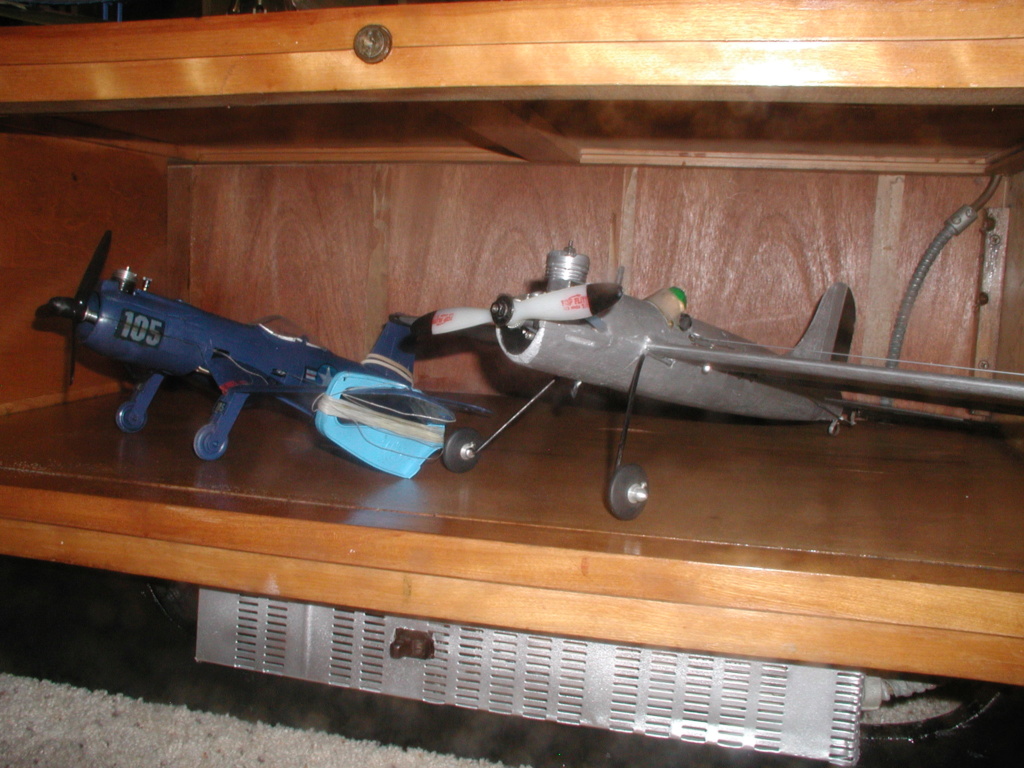 Nice ! That Stuka dressed out looks Good !! the cabinet is just a add on for you my man , Good Fun !!

Great job. That cabinet looks very nice there, and even better with the toys in it! I was going to ask the same as Eric did about driving the 4-wheeler in the house, but he beat me to it. Maybe you need another littler 4-wheeler for the next cabinet......

Mark and I were the four-wheelers.

Thankfully the cart fit through the door, barely. This one is more modern and smaller in every dimension and much lighter but no storage (hangar) space underneath. Lighting is added on. Mark and friend just walked it up the stairs and into the house. 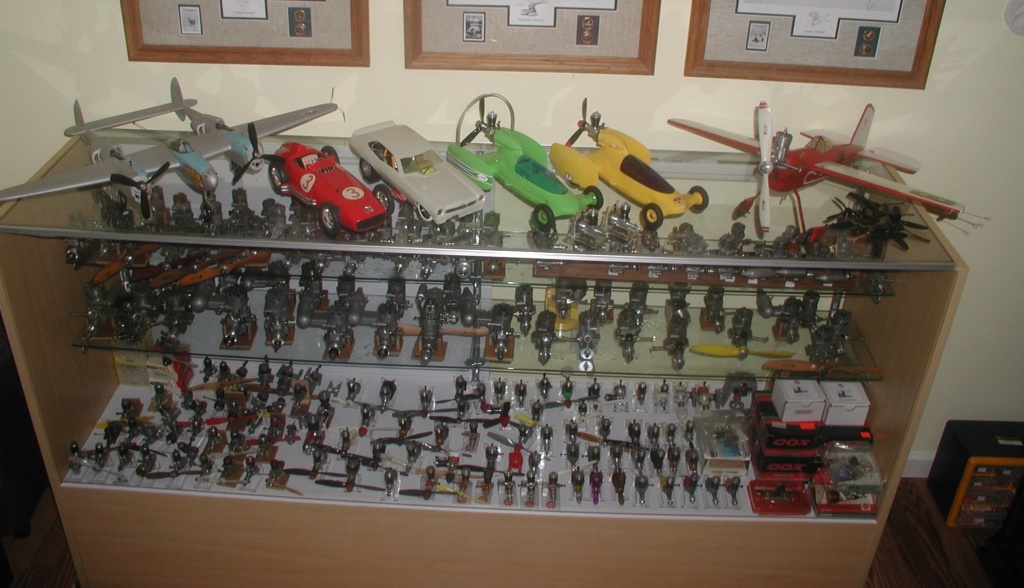 rsv1cox wrote:
This one is more modern and smaller in every dimension and much lighter but no storage (hangar) space underneath.

Like walking into a Hobby shop from the 50's. Cool indeed.

Like the P-38 that is displayed. What manufacturer produced it?

rsv1cox wrote:
This one is more modern and smaller in every dimension and much lighter but no storage (hangar) space underneath.

Like walking into a Hobby shop from the 50's. Cool indeed.

Like the P-38 that is displayed. What manufacturer produced it?

The manufacturer was me Doc, about 40 years ago.  Scratch built from images, not really plans from American aircraft modeler.  Rib spacing etc. were my guesstimates. 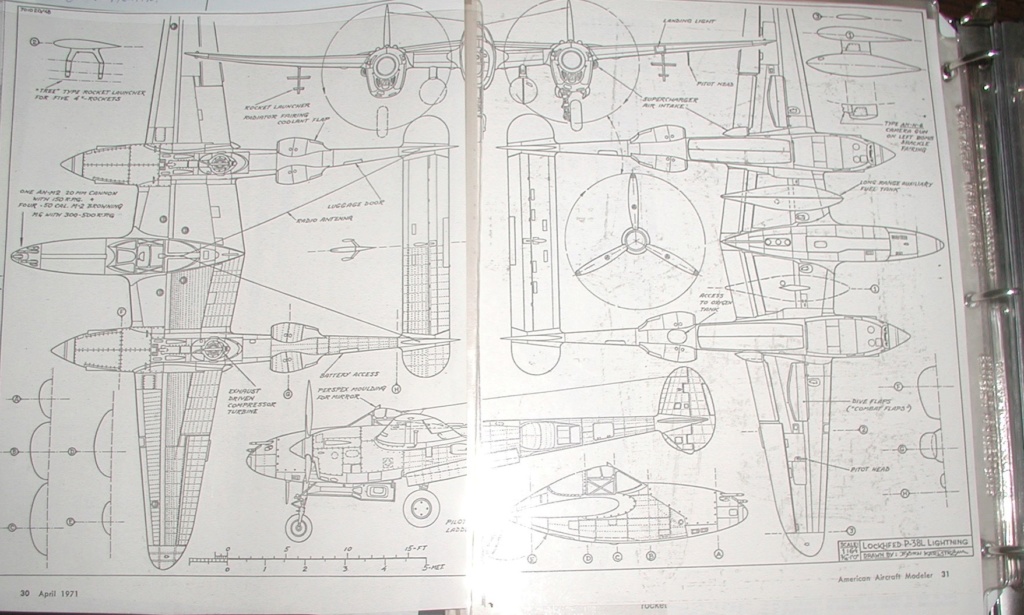 But, where have you been...

I have labored this model to death here over the past years.  So much so that when people see P-38 in my post titles they quickly move on to something else. 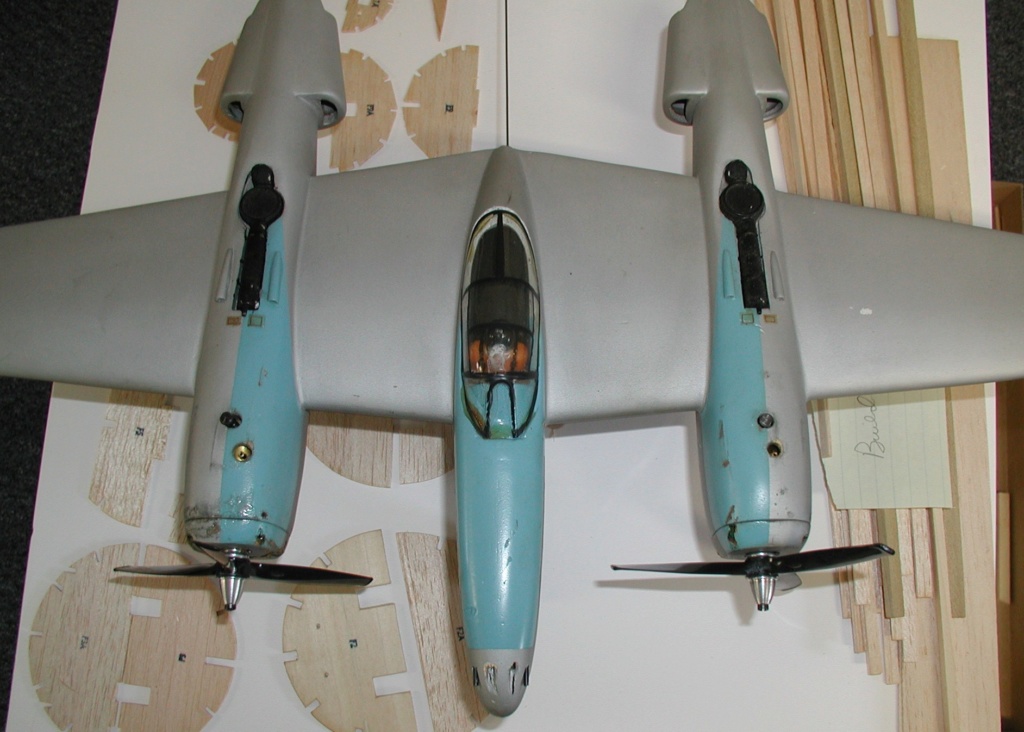 I have flown it many times.  Started out with Golden Bees then Black Widows.  Back to Golden Bees now but it hasn't seen air-time for years.

Thanks for asking.  A favorite of mine that I always enjoy showing off.

and...Thanks Fred, that is just what I was looking for.  Lot's of images there that would be a great background for the cabinet.  Found the Corsair image too, coming out of the ceiling over a ceiling fan.  Some people just understand my oblique requests.

It’s a good looking model Bob, and really well crafted. I doubt anyone is tired of seeing it. I would like to see it in the air. Maybe Mark can give it a whirl sometime.

RE: Moving Day for the display cabinet

Bob,
Really beautiful and top notch display unit with remarkably nice engines and planes!!
I'd love to see that hand built P-38 in the air !!
Someday maybe I'll run across a really nice counter display like that.
Then my wife wouldn't mind coming in to spend sometime in the room with me that she calls "Area 52".
Great Job with some beautiful stuff !!
Steve....

Thanks guys,  I will see what I can do and post a page.

The problem is, I really didn't build it light or to fly. More of a scale model fun to build adding all those do-dads which just added weight and drag.  However I flew it a lot at the Naval Base Patuxent River in Maryland off a cement circle that was used for electronic testing of the P-3 Orion.  Smooth and level it took almost a quarter of the circle on 32' lines to get airborne.  Then just circles, no wingovers even or it would not be in one piece today.  Hand launches were not advisable.

But it was exciting when one engine cut out.  I would bring it down to about one foot and let it chug along.  When the second engine cut out it would fall like a rock.  That's when I went to Black Widows which didn't make much of a difference.  But listening to those two engines in sync was always a thrill.

Pictures above show it better than it really is.  Lot's of bumps and bruises from hard landings and shop wear.  But, after each flight I removed the engines and cleaned the nacelles. Engines too, the GB's in there today are free and not locked up.  Bet if I tried they would both start right now.

Present problem is, there is no local place with pavement to take off from.  School yards today frown on that.

In younger days.  I don't think I ever flew it on anything but Cox 5/3's

One thing that I did do right, that landing gear.  It really took a beating and is as solid today as the day I built it. 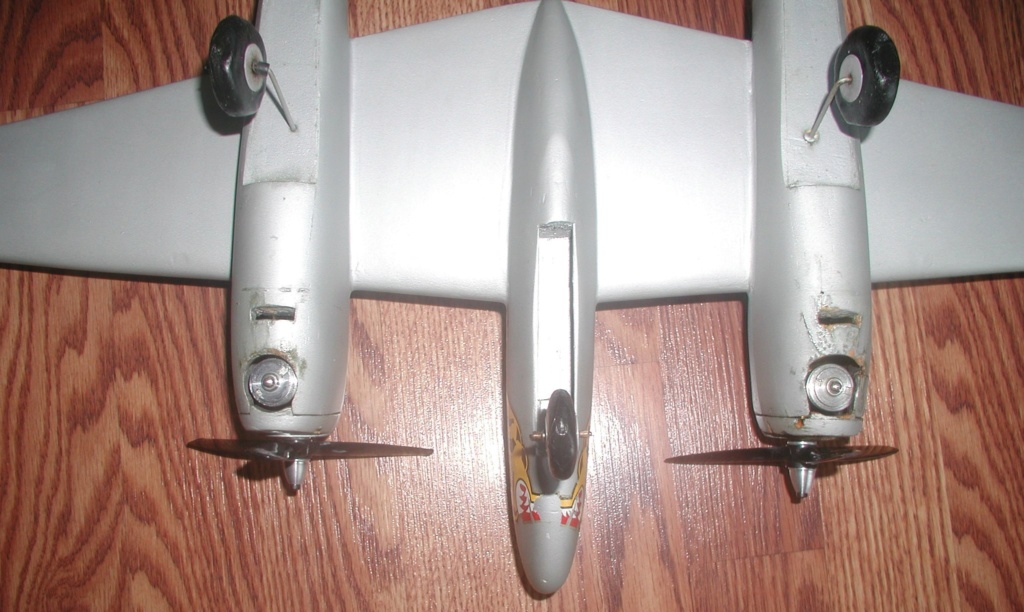 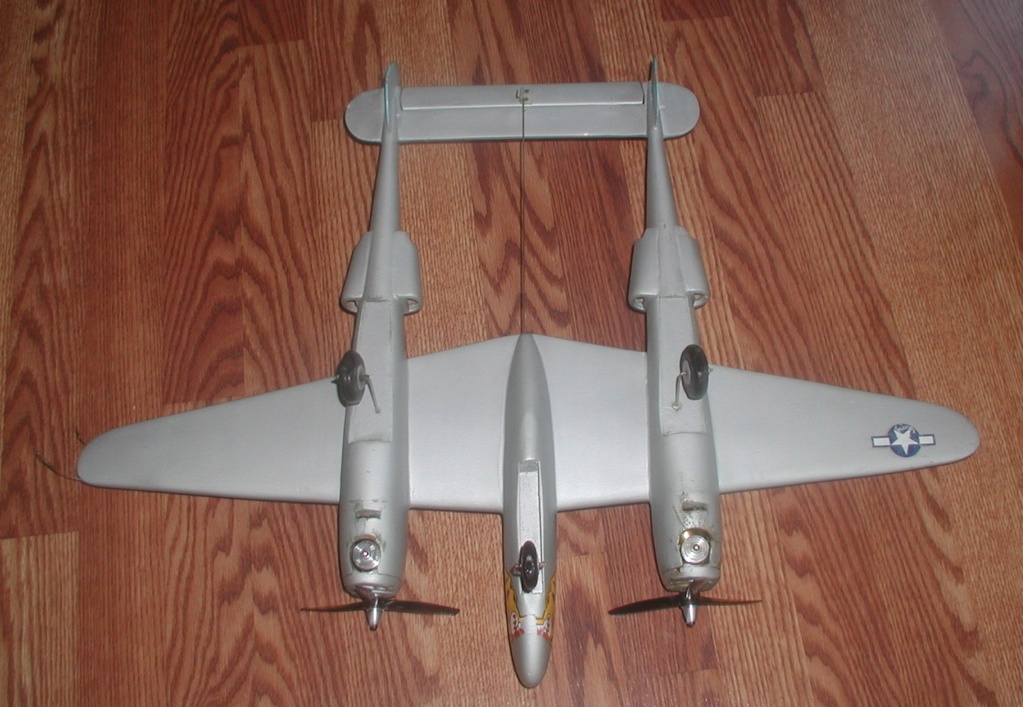 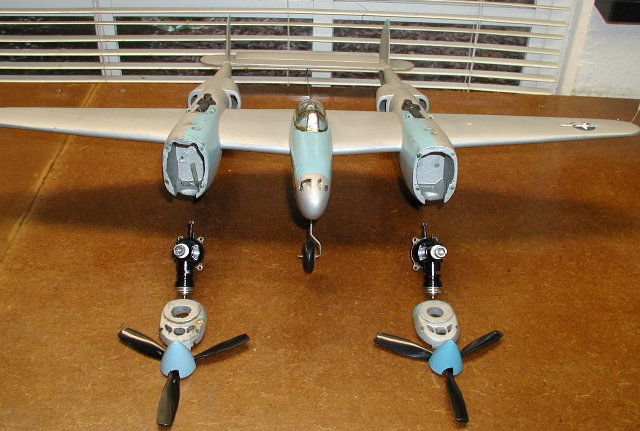 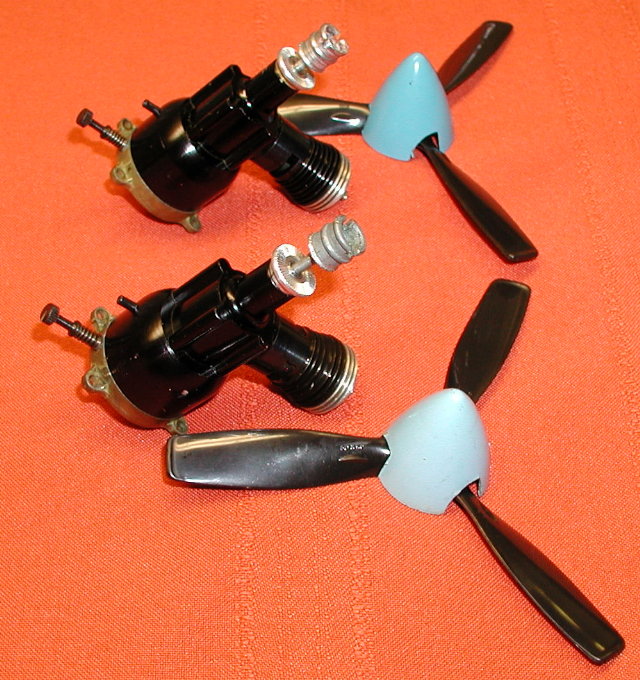 Similar topics
» Display cabinet - For free take
» How's the weather?
» I'm Moving...
» Moving the CG
» i have an ohlsson&rice tether car motor and it needs help