» Help to identify an engine
by crankbndr Yesterday at 8:06 am

» Preferred turbo plug for Kamtechnik head
by fredvon4 Yesterday at 7:21 am

This past Sunday, I picked up an abused product engine. Originally thought the needle was missing, but it was actually broken in the backplate flush.... Well, luck was on my side I guess as I was able to extract it. It is rather short, but I thought I would try fixing it as I will not be ordering parts anytime soon. I do want to run it, and I can swap out the needle from another engine as they are both the coarse thread. But I wanted to try fixing it. So I grabbed a small piece of 1/8" brass tube and heated it up to put solder inside. Once in, I inserted the tip of what remained of the needle, approximately 1/16" or less while hot and held it there. It does screw in and out, however, when all the way in, there is still some air hissing past it. But I do not have a horseshoe engine here that has been left set up to see how the air flows in it. So with any luck, it will run! If not, I will put it on the backburner. I wish the engine could talk too as the 'hex' prop driver is pretty rounded with very little squareness remaining. I will now disassemble the engine complete and give it a bath, reassemble it then try to run it. I have so much on the go right now, I cannot say when that will be, but would like to try for the weekend. Stay tuned. 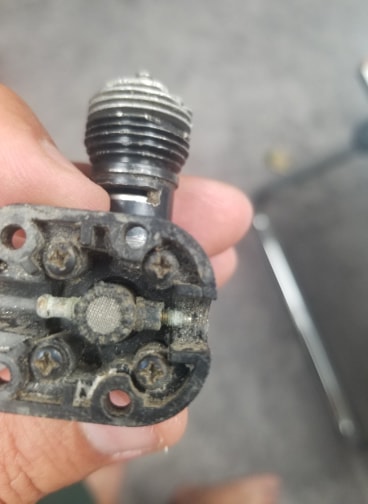 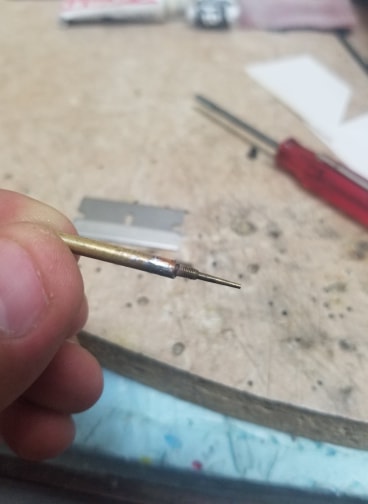 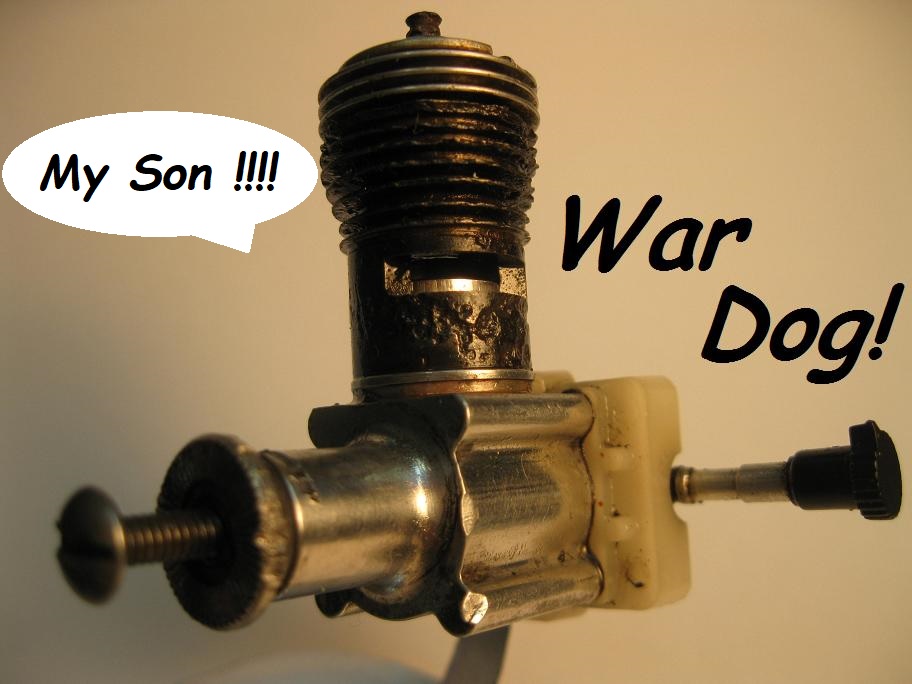 She does look pretty rough there , hope it cleans up and runs for you .

Poor lil thing...nice job with the NV extension! The thread looks too short though so no wonder you cannot fully close it. Hopefully it was broken set near the sweet spot of rpm so you will be able to still use the NV.

How about the compression? Hopefully it was not impaired with so much dirt around the intake and exhaust area!

This war dog seems to have slept in acid or similar liquor, losing some of the external face of the cylinder!! Those pits look like like warts! Lucky if the sensitive internals are still intact and compression is still good enough to wake and run..

Nice recovery on the needle Chancey. You have a thing for soldering.

I still use your heat with a pencil soldering iron method to remove castor locked screws from plastic models. Works great.

I believe Kim has posted a few times, video of WAR DOG running

Just a little update. The little guy is now apart and soaking in methanol. I am usually a crock pot guy, but I want to try straight methanol and see what happens. If this does not work to my satisfaction, the Crock Pot is in standby mode! But while taking it apart, I found a couple of different things not seen before. There was some sort of 'shim' on top of the reed before the plastic reed retainer was installed, or should I say re-installed. And secondly, the one I remembered to take a picture of (not the greatest, but you can see at the edges of the exhaust)... Well, I am now confident to say that the cylinder was one of the 'dual slit' type. I saw this just before going to give it a bath. So, I did take my smallest file and smooth out the rough edges left behind from the modification. So now this will definately be a crap shoot whether or not it will run, or did it even run before at one time. The guy I bought it from said it did run, but I am having serious doubts as the reed would not have been able to move, and the broken needle as well. This is another reason I love these engines! 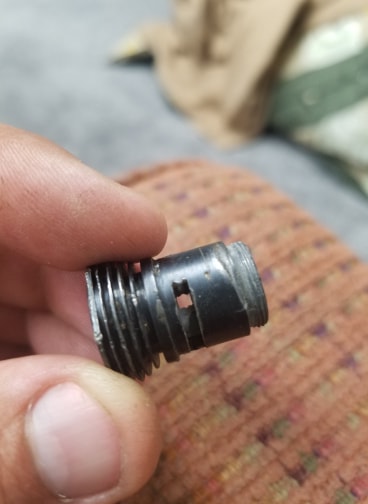 tongue in cheek....please stop abusing the rare commodity.....buy drug store 91% alcohol and preserve the ever depleting supply of meth

I'll do a short note on it in another thread!

@fredvon4 wrote:tongue in cheek....please stop abusing the rare commodity.....buy drug store 91% alcohol and preserve the ever depleting supply of meth

I think that only applies to modelers the dragstrip an't slowed a bit LOL http://www.piedmontdragway.com/ close to home

Hi Chancey! Great that you were able to extract that broken needle! The 2nd generation Cox product-backplate.. is what jump-started me into designing my own 1/2-A control-line model airplanes 25+ years ago. At that time, I had a handful of Cox .049 Reed-valve engines. It was the early 1990's and Cox was still fulfilling orders for parts. I happened to come-across some small Tin "Perfect" brand wedge-tanks for 1/2A C/L profile model airplanes at an old hobby-shop on "Cape Cod" Massachusetts. I bought several fuel-tanks that day!

Since then.. there have been voids in my designing/building activities.. but never for "too long". I've always held the aeromodeling-hobby close to my heart.. and collected materials that I thought I could use in "future" aero-modeling projects.

I have spare needles and "custom springs" that would fit that backplate Chancey. I'd be glad to send a care-pkg. if you need it to get that engine running.

Well, it is about time for an update! I mounted it up today and went to give it a shot. I replaced the homemade head adapter with a working glowhead for the test. Withe the 'repaired' needle, it immediately popped on the first flip, as well on many after that, but just did not want to run. So, I replaced the needle with one from my other product engine and truned it out 3 turns. It again fired, ran for a couple seconds then died. brought it in to about 2 1/2 turns and it fired and ran on the first try! It was a nice steady run, but very needle sensitive, both rich and lean. I did not try a piece of fuel tubing on teh needle, so that may be a small problem. I am possibly leaning to the cylinder modifications that were done to remove the piece inbetween the slits. Regardless, I am happy that it worked out! Now I have a couple other things I would like to try with the original needle. Nothing will damage it anymore as it is already pooched! So, I will try another mod to see if I can get that one working yet! Sorry for the crappy picture, I did not have my garage lights on, and I did not realize how bad the picture was until I downloaded it.... 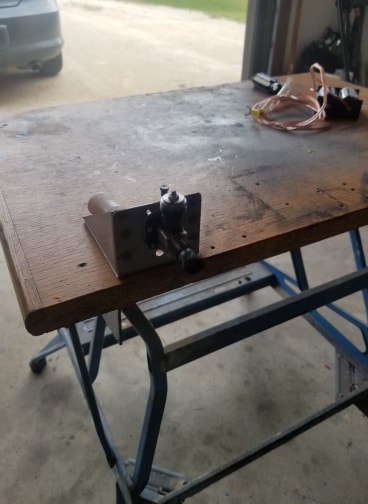 And to add, the engine ran out the full tank in two tries. About half the first time, then someone was playing with the needle causing it to die, than said person, who will remain nameless, started it right back up and ran it dry!

And also a PSA for those who also may use a workbench like mine for running engines. This is the second time in just over a week this has happened. Today while running the Cox, the releases did release themselves again. This time I was right there so I did catch it and lock it back up. Last time, I was walking away from the engine to get my phone I believe it was when I heard some commotion behind me. First step was drop and duck. I realized then that it dropped with my OS LA .25 running, and it did not miss a beat during the fall. While running I heard a wierd noise which turned out to be the propeller hitting the bottom support, causing damage to the very tips of the propeller. I ran over and lifted it back into place again while running. Next step was to go inside and change my underpants after the 'bang', as I thought the engine seperated from the stand and was only who-knows-where! I removed the propeller and sanded it, painted the tips, and rebalanced it. Next to run again will be the repaired product engine or my .25 again.

Hanging in there pays off Chancey.  I tend to give up to soon on problem engines.  So much to do, so little time!

I have had engines vibrate themselves loose on a test stand, but always have a rag on hand to toss into the prop before they fall off.  I might have had an engine come off in flight, but I'm not getting into that.  Fuel soaked backplates and wood screws do not always mix.

It's been a while, but while the engine still runs, I now have time to revisit repairing the factory needle again. Stay tuned for another attempt at the repair! Still not going to hold my breath though....

@roddie wrote:Hi Chancey! Great that you were able to extract that broken needle! The 2nd generation Cox product-backplate.. is what jump-started me into designing my own 1/2-A control-line model airplanes 25+ years ago. At that time, I had a handful of Cox .049 Reed-valve engines. It was the early 1990's and Cox was still fulfilling orders for parts. I happened to come-across some small Tin "Perfect" brand wedge-tanks for 1/2A C/L profile model airplanes at an old hobby-shop on "Cape Cod" Massachusetts. I bought several fuel-tanks that day!

Since then.. there have been voids in my designing/building activities.. but never for "too long". I've always held the aeromodeling-hobby close to my heart.. and collected materials that I thought I could use in "future" aero-modeling projects.

I have spare needles and "custom springs" that would fit that backplate Chancey. I'd be glad to send a care-pkg. if you need it to get that engine running.

My sOoOo bad.. have had the needle for Chancey.. but included a few other things (needing a box..) and still need to finish packing it up.. and mail it..

Tried to solder on a solid piece of brass rod to the existing needle and the threads really 'wicked up' the solder the same way the spring does to the fuel.....