Log in
Search
Latest topics
» Strange stuff is happening
by rsv1cox Today at 9:38 am

» The unfriendly Bee
by getback Today at 8:42 am

» Another strange idea
by getback Today at 6:38 am

» Tinking of build Amphibious vehicle with .049 engine
by davidll1984 Yesterday at 3:40 pm

» This didn't go too well.
by FlipStart Yesterday at 2:46 pm

» Spike and Oscar, best buddies
by andrew Yesterday at 10:52 am

or go with his 35%? Run straight from the bottle or add castor?

Bob. Fitz fuels you pictured is a very good quality fuel. I've been having great success using it. There's always Sig, when they have it. One fuel that I have noticed that's taken the front seat is Ritch's brew. Randy Ritch has been sponsoring the NATS with his fuels and I've been able to receive many samples of it. I like it the most I just have to work out the shipping issues as this is proving to be very expensive. I go through 2 gallons of high nitro a season and 6 gallons annually of stunt fuel between my son and I. I bought the fuel you show on EBAY 2 months ago and already I'm into the second quart with only a half left. I went with the 24% nitro and I have experienced no issues using it.

I will say I do fuel a little different than the other guys. Truggie fuel, low oil Helo fuel and castor. All mixed up using a spreadsheet that takes the known values from two fuels, a known quantity of castor, and gives you the overall numbers. Adjust any one of the three and watch the total numbers change.

Why do I do this? To beat shipping charges! I "think" I'm saving about $8/qt by the time all is said and done.

So far, no Norvel , AP, or Cox engine failures.

The glowplugboy fuel seems a good value, but 18% Klotz +2% synthetic? Maybe I should add a bit more of my SIG castor to it but I'm always confused as to how much.

I have a quart of Brodak 5% but I'm saving it for my larger displacement engines. I have run Cox engines on 10% Traxx with added castor, but never thought they ran to their full potential on that fuel.. 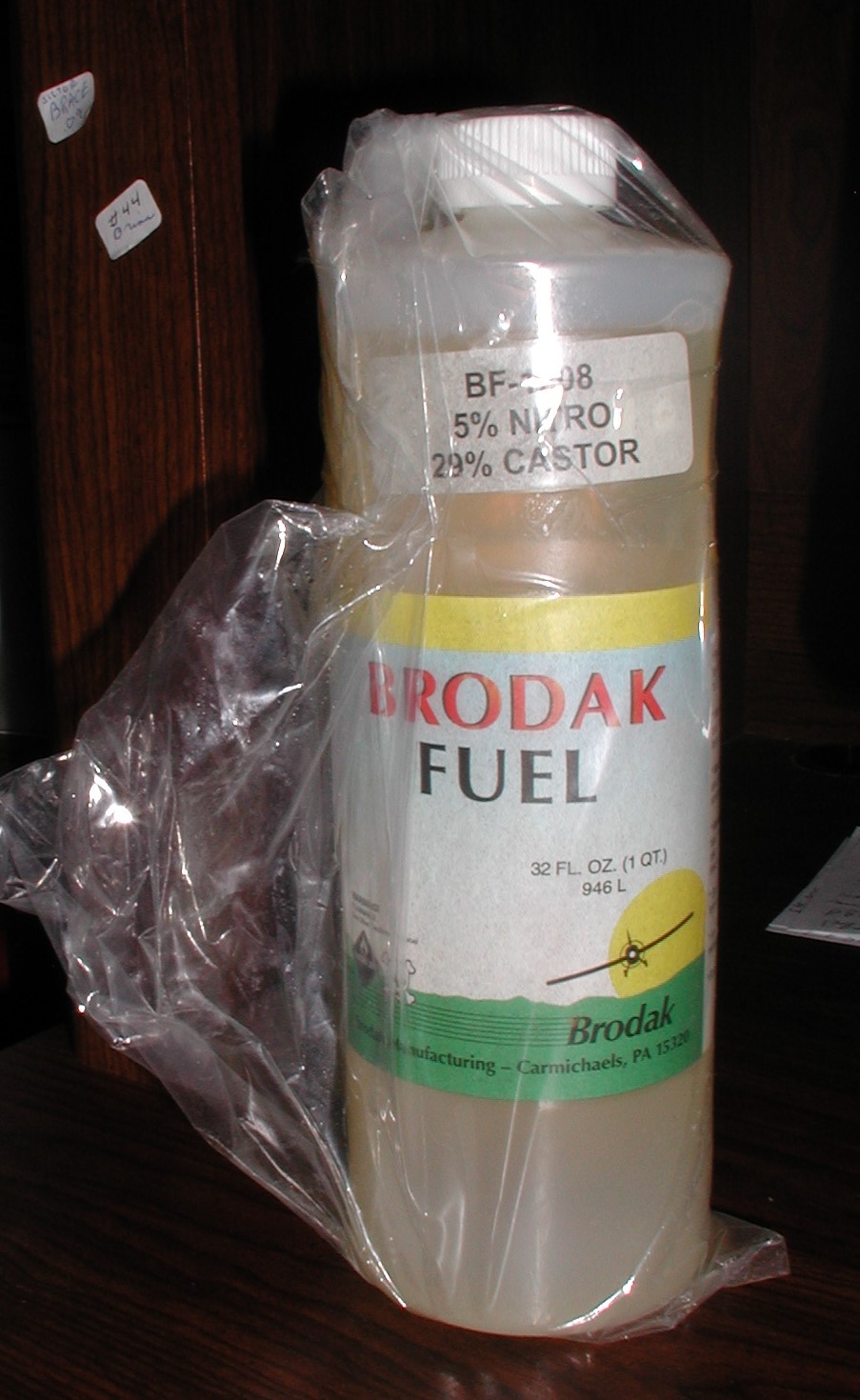 Last of my Cox fuel sits in that fueler. Ran this little made-up thin wall I put together a couple of years ago. Original metal star reed and a cylinder out of a P-40. Started first flip running backwards then burped back to proper rotation. Did that a couple of times, each running irregular for a few seconds. After about five of these the reed loosened up and it ran fine, running all the fuel out of the tank. 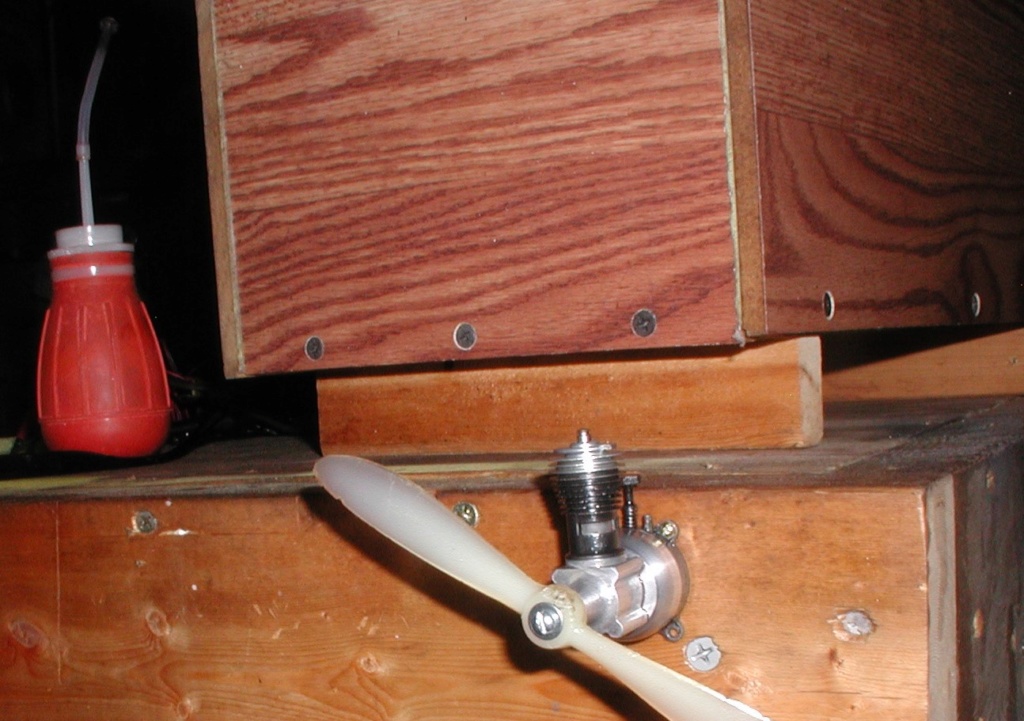 It will go into my work in progress Muscaino Super Sabre rebuild. Gave up on the .020 / Space Bug Jr idea. Don't think they would pull it around. 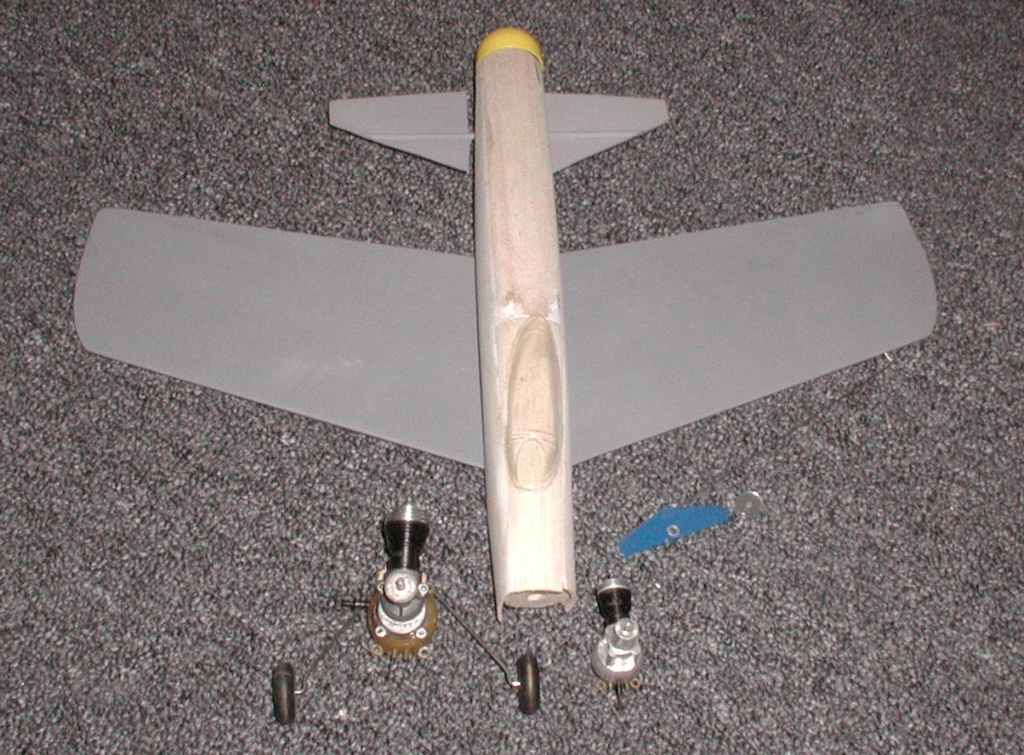 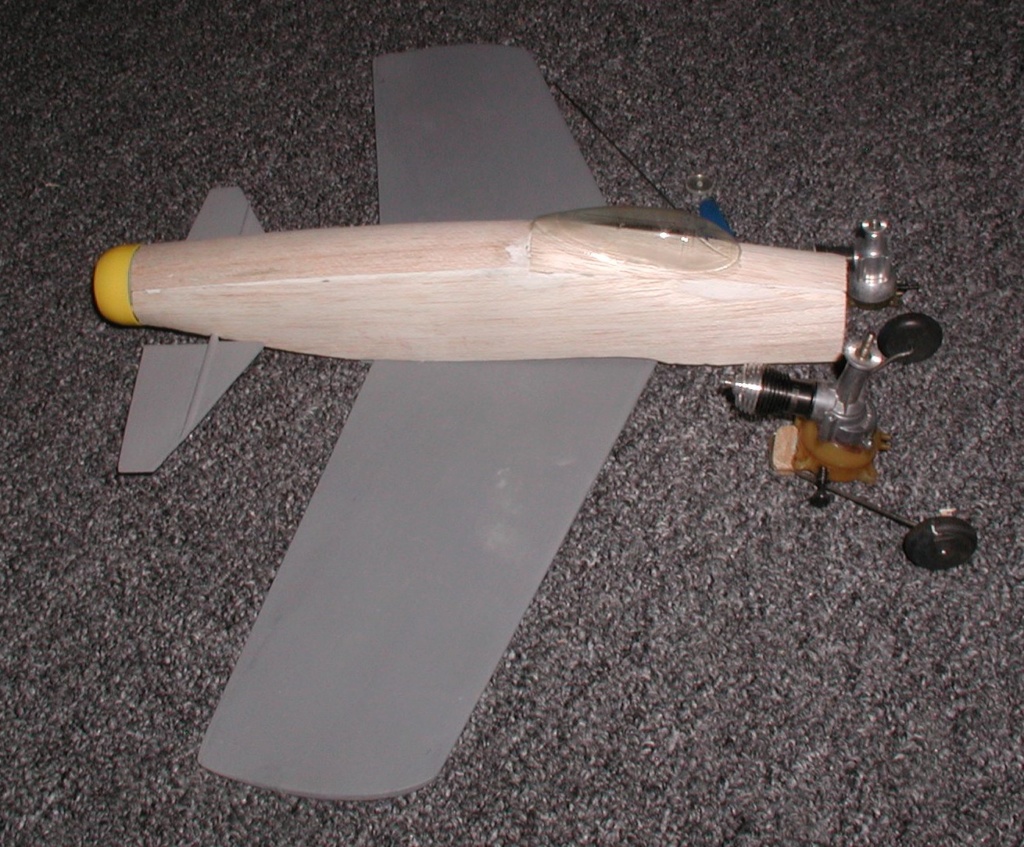 The local HOBBYTOWN USA in my neck of woods sells various VP brand fuel mixtures for cars or planes. That would be Mason Ohio. 513 738 1576  Mark

Hi Robert, I've been running "Sig" Champion 1/2A fuel in my Cox engines.. ever since Cox's glow-fuel became unavailable to me. When was that? .... I'll say sometime in the early 1990's.

I've always purchased Sig's 1/2A "Champion" fuels by the QUART.. which has avoided paying a HAZMAT fee.. which is assessed on gallons. 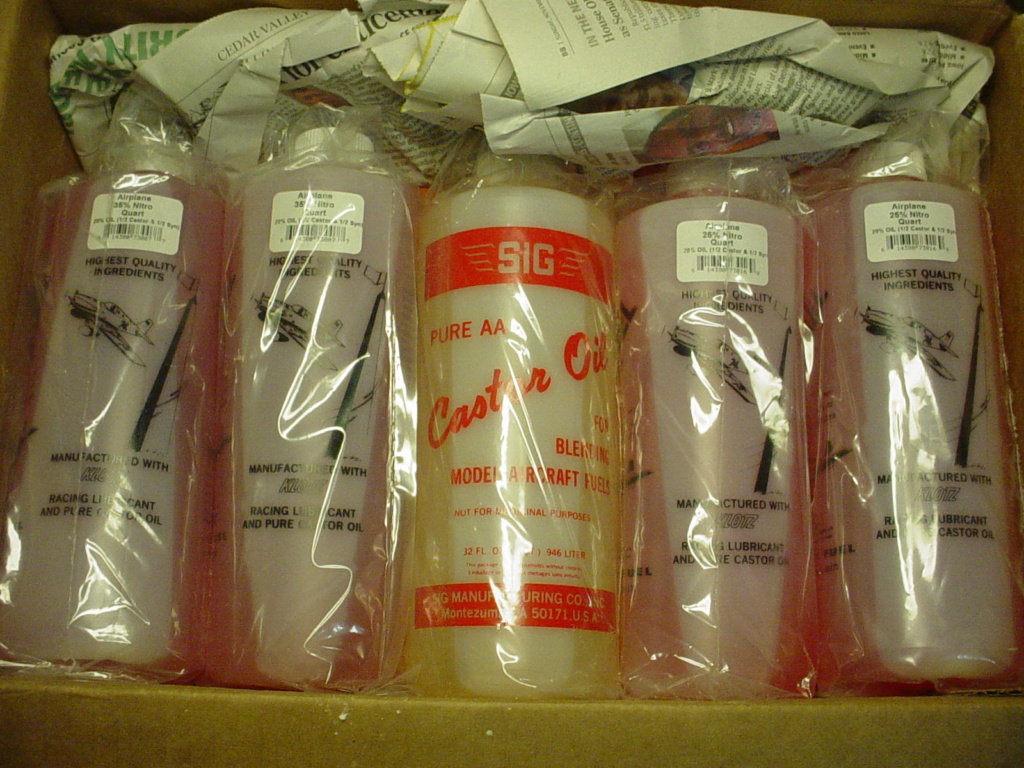 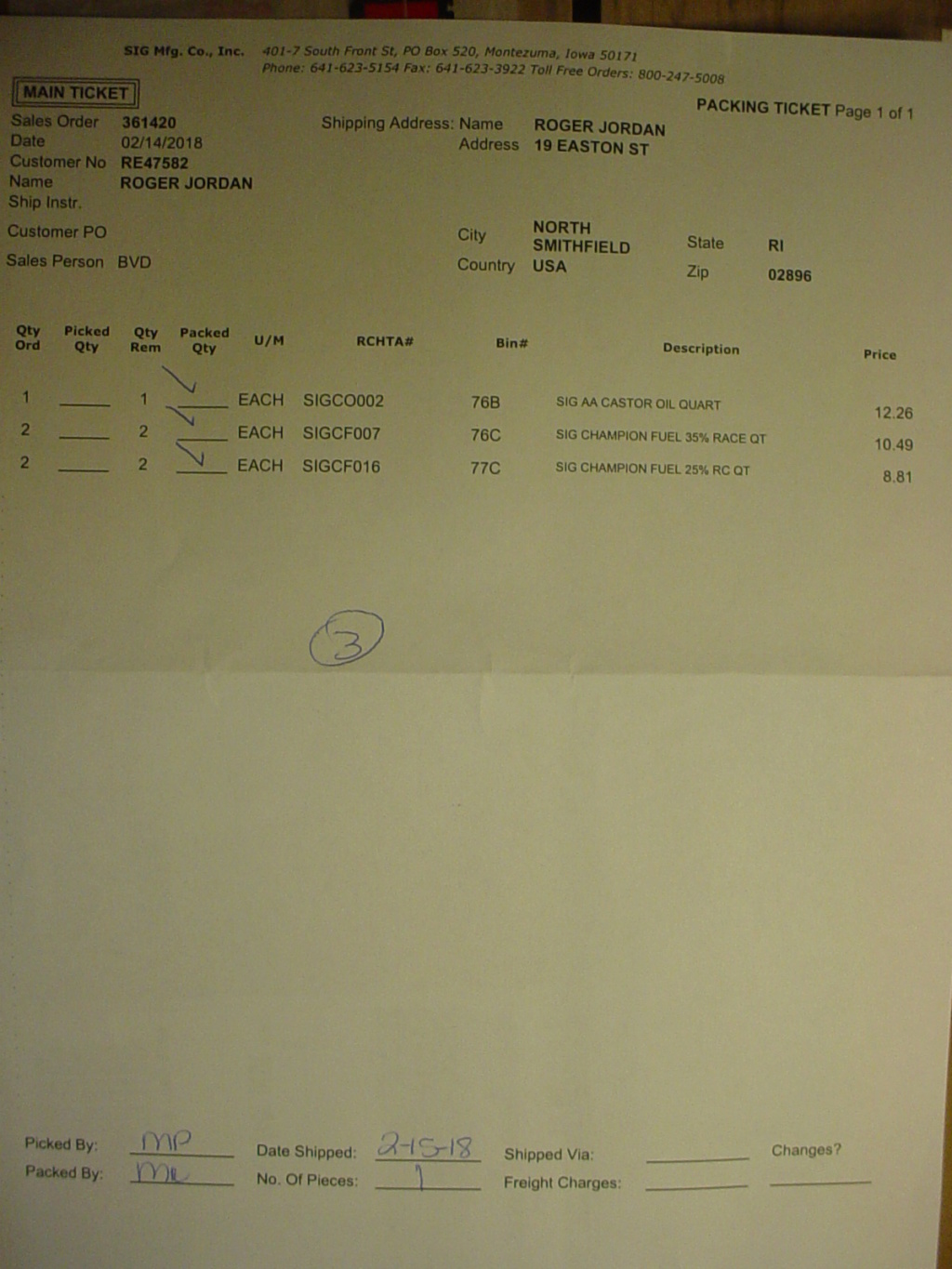 The plastic bottles seem to be the same construction as they were.. 30 some-odd years ago, and I still have some of that old fuel.. which will still get a tired old engine running.

In a nutshell; I support Sig Manufacturing Co. as one of the very few model-airplane manufacturers remaining in business; that continue to cater to the internal-combustion engine modeler; be it C/L or R/C.

Nothing wrong with Sig or Glowplugboy fuels. If I weren't so painfully cheap, I'd go that proven route...proven by time and word of mouth! I do agree with the need for castor, so using either of those fuels gets a guy what his engines need with no real downside.

Taking a look at official Cox docs gives the numbers designed for these engines. You can't go wrong buying or blending to meet LM Cox numbers. Anything else, well, YMMV.

I just checked the downloads section. There are fuels make-up sheets for the official Cox blends. The 18% castor and 2% Dow lube lines up with the stuff near the top of this thread.

Look under "Information sheets," find the section titled "Other Cox related documents, " and read the three fuel mix docs (Glow Power, Flight Power, Race Power fuel formula sheets). In each instance 18% castor, 2% "Dow lube," while the methanol/nitro content gets adjusted up and down around the same oil percentages. I suspect Dow lube was (is?) synthetic.

I will say I do fuel a little different than the other guys. Truggie fuel, low oil Helo fuel and castor. All mixed up using a spreadsheet that takes the known values from two fuels, a known quantity of castor, and gives you the overall numbers. Adjust any one of the three and watch the total numbers change.

You're not on your own Jim.  Over here I doubt you'd find any of the fuel brands that you guys talk about, and no-one makes fuel suitable for 1/2A/Cox engines.  Any shops local to me only stock car/buggy fuel.  Occasionally the one local toy shop who stocks anything aeromodelling-wise has a 25%-50% off sale for a day or two.  I buy 4 litres of car fuel which is 16% nitro and, after contacting the manufacturer, 18% oil including 2% castor.  (They were reluctant to give up their formula).  I add castor up to 25% total oil and if I want higher nitro I ad that as well using my favorite on-line fuel mix calculator.  Seems to work fine for me and is much easier and economical than trying to find the right commercial mix.  9% of the mix is castor and 16% synth, so I'm more than happy that my engines will be well protected and kept clean.