Log in
Search
Latest topics
» Perfect Tanks. Please enlighten me
by kevin king Today at 11:35 am 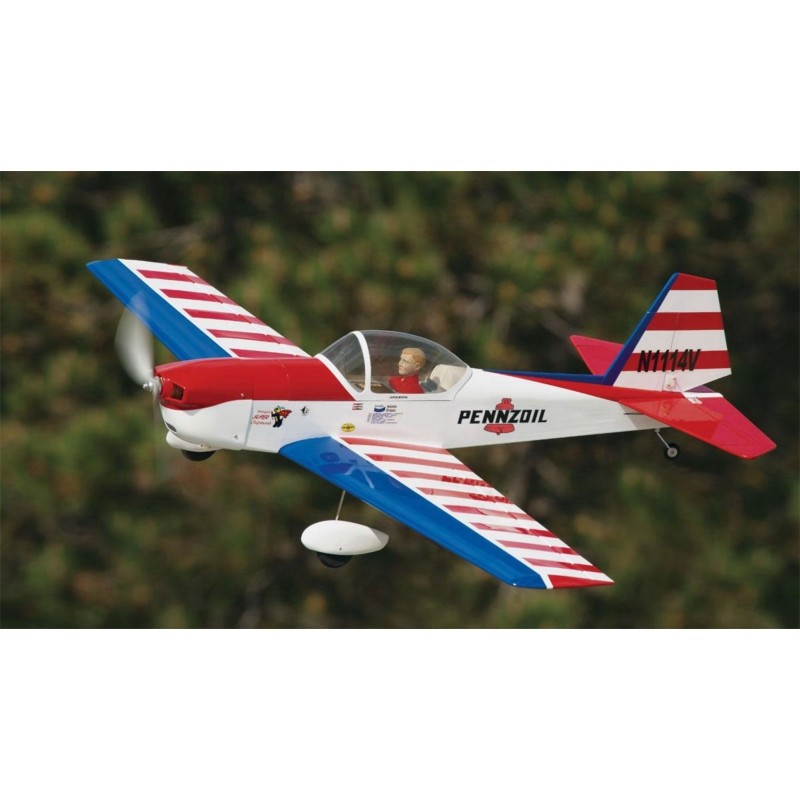 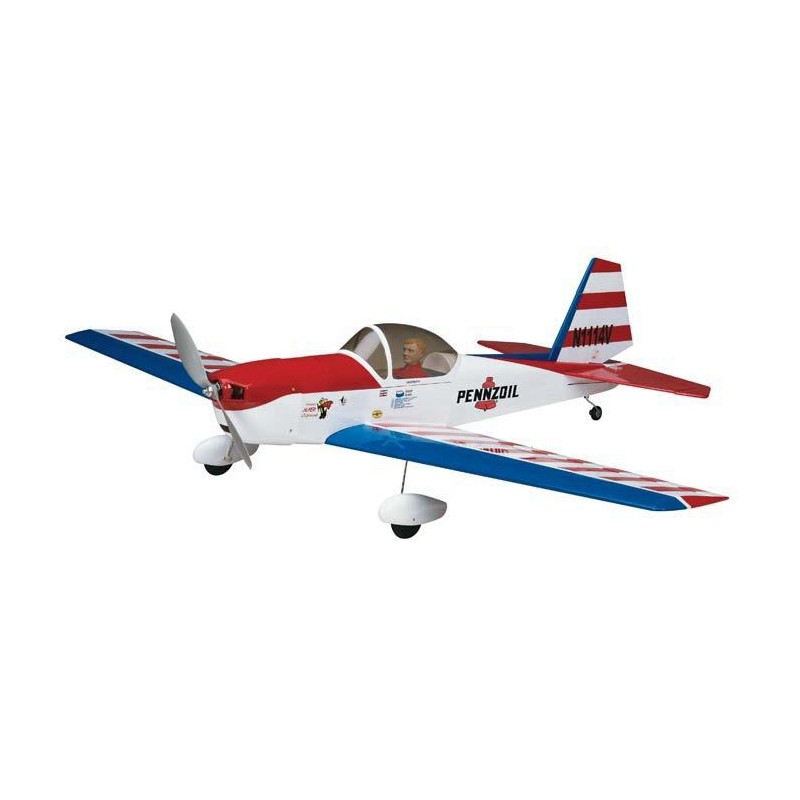 Kris has one that flies well with a Norvel .074
I would fly it with at least that much power.
It also helps with low weight and stress to the
electric designed airframe.

I wonder if if could handle the small O.S. .20 Four Stroke?
I bought this one off ebay last year.

The pictures seem to show the one from Great Planes rather than the Carl Goldberg one?

I have converted the CG version to glow some time ago and I wrote a little about that conversion on the RCU forum at the time: http://www.rcuniverse.com/forum/1-2-1-8-airplanes-70/9052204-super-chipmunk-conversion.html

In terms of power a .10 engine would in principle be fine and it would allow for a bit wider prop selection compared to the Norvel .074 engine but one have to keep in mind that these are chinese ARF's and they a rather weak in their construction. I have reinforced mine around the fire-wall, and have also put triangular spruce to reinforce the fuselage sides from the firewall and back past the wing.

Pros and cons in short:
Norvel .061: It will not handle a large enough prop size for the plane, at least a 6x4 props are needed I feel.

Norvel .074: I think this hits a sweet spot, with its low overall weight and the performance on the APC 6.3x4 prop I think it is idéal for the plane. The power to weight ratio is very hard to match.

OS .10 FSR: This could work well on eg. a 7x4 prop, but these engines vibrate a lot around full throttle and I don't think that it would be suitable for the weak airframe in the long run. One would also struggle to fit it inside the cowl.

OS .10FP: This would be stellar on a 7x5 prop, more like a pylon plane, but risking to fly the airframe appart.

Here is a short video with the Norvel .074 engine, I was mainly playing around with the engine, trying to find a low but reliable idle (I'm adjusting the radio stop and checking that the engine doesn't hesitate even with a quick bump on the throttle):

Thanks Kris for all this data!
The model says Carl Goldberg for Great Plans, Yes we are talking about the same plane!
What do you think of a .09 Cox Tee dee R / C? 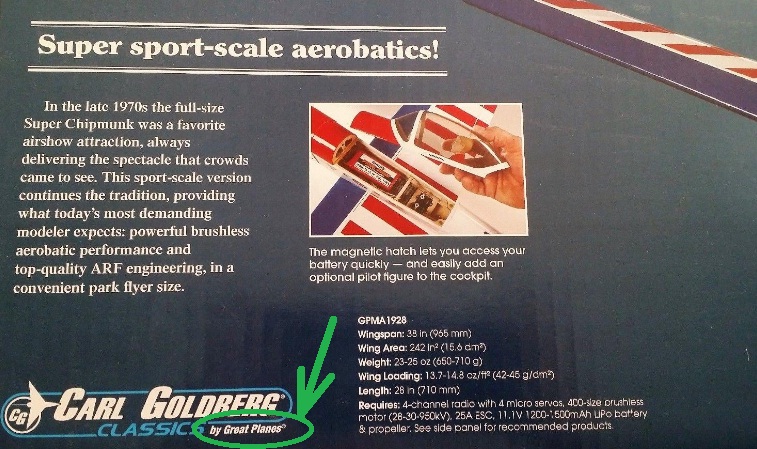 Okey, that's the "reproduction" model. I haven't seen any around here but there are few visible changes:
- magnetically held hatch on the top (rather than mechanical)
- included pilot figure
- changed servo location for elevator and rudder

There are slight differences in the specs, see below. Notably a higher weight is given, not sure if that is good (i.e. stronger structure) or simply due to a different recommended electric set-up. Mine is just shy of 20oz (if I remember correctly), and it flies very well at low speeds. Anything around 23oz or higher might be better off with a .10 engine, but it will be very hard to fit that inside the engine-cowl I think. Overpowering these things will not work well, there is quite a lot of wing incidence and the model tends to balloon at full power. I have added engine downthrust on mine in order to somewhat reduce the effect. For a faster model it would be good to reduce the wing incidence instead.

Here are the specs for the original CG model: 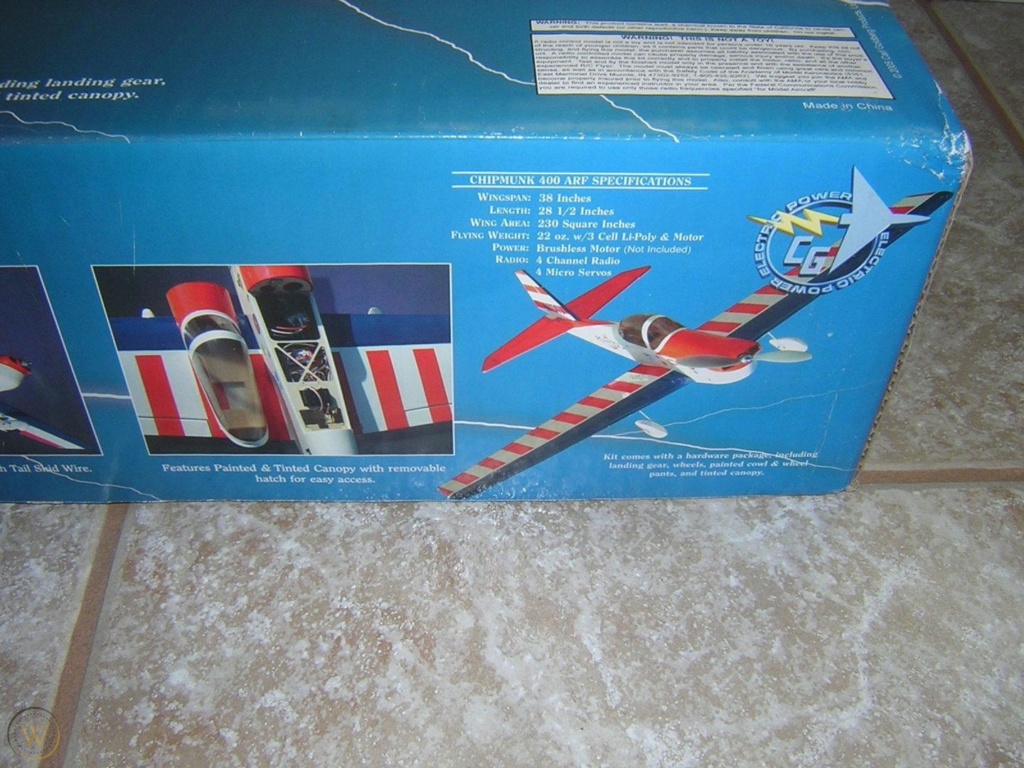 I haven't flown anything with the Cox .09RC yet, so I cannot give much advice there. It is about 1oz heavier than than the Norvel .074, but it should be able to handle a 7x3.5 prop, so that might compensate somewhat. It would be cool to have a scale version of the N13A with the Cox marking

I vote Norvel .074. It would fly that bird nicely