» Question for the pedantic engine collectors here
by sosam117 Today at 11:18 am

» music vids.. some of your favorites
by GallopingGhostler Today at 8:38 am

» Peoples thoughts and experience with different glues
by Yabby Today at 3:00 am

» Tee Dee .05 RC surging during idle any suggestions on how to fix?
by cmulder Yesterday at 11:36 am

» what airplanes have you built? post your pics of the models and feel free to talk about your airplanes
by getback Yesterday at 6:56 am

Was going to convert the only used Pee Wee I have, to Bernie’s new .020 3-D printed tankless mount. This Pee Wee has been in my original Cox parts box (i.e. Cigar box) for over 30-40 years, with only “Pee Wee” written on the paper towel it was wrapped in. Can’t remember when, or where it came from.

Got the 3-D mount, and decided to see how the engine looked inside, and do a test fit of the mount, before ordering any rebuild parts the engine might need.

Imagine my surprise when I pulled the original tank, and found the engine had never been run, fueled, or even mounted! It was obviously factory fresh, and squeaky-clean inside, to match the flawless outsides!

OK, I’m not about to modify and run a brand-new engine, so I will put it back in the cigar box, and mark it as new.

So now I need a nice Pee Wee .020 engine, with good or better compression. Don’t need a box, papers, tools, prop hardware, or prop, and you can keep those, and the glow head if you like.

Prefer un-damaged fins, case, internal parts, and drive washer. Pictures would be nice.
Please let me know what you have, and how much you want. Have Paypal, or check for payment.

Thanks, and Happy New Year to all!

A donor Pee Wee should be relatively easy to find, considering how many of them have busted backplate ears and messed up anodizing on the tank because of using a too big screwdriver.

Good luck with your project Bill!

getback wrote:I think i have some / let me ask do you need the tank ? Or just a CC /pist. cly. assy .

Thanks for the reply. Haven't heard from you lately, but always read your forum posts, so I know your still active here.

I'll be using an external tank, so I don't need another tank. A complete engine is also OK, as I can throw the extra parts in the Cox junk box.

All I need is a crankcase, with crank shaft, drive washer, piston, cylinder, and rod. Also have rod reset tools for .010 thru .09, and spare glow heads for all of them.

Bernie includes everything but the screwdriver for installing the 3-D printed backplate mounts.

Thanks for the reply.

You are correct. There are lots of nice used Cox .020 engines around, so I'm sure one will turn up.

The first was a brand new engine mounted on a Goldberg Ranger 30 FF. Lost the Ranger on it's first flight, when it flew out of sight, and was never found.

The second Pee Wee was on a tiny (12 inch span) Larry Scarinzi Queen Bee C/L Bi-plane, flown in Denver, Colorado. Flew wonderfully, at that hi-altitude. Now, when I see videos of a Bi-Slob in flight, it reminds me of my Queen Bee! I can't remember what happened to the Queen Bee, but it never made it to our next Air Force assignment in New Mexico a few years later.

Bill, last weekend a fellow club member flew a Goldber Ranger with the .020. We had a swap meet Thanksgiving weekend in which he picked up this Ranger. It was not in good shape but he fixed it up and painted it a bit and man was it neat to see.

Larry Scarinzi was present at the swap meet . Larry provided me with the plans for the Queen Bee some years ago which I did build. A terrific flying plane and fast. I enjoy being in Larry's company. Here's a pic of my Queen Bee. I changed the wire struts to 1/64" ply . That's the only deviation I did from the plans. I covered the model with tissue. Unfortunately, the purple tissue has since faded. It's a bit difficult for me to get my big hands in there to needle it without hitting the prop. The cool factor goes way up seeing this one fly. 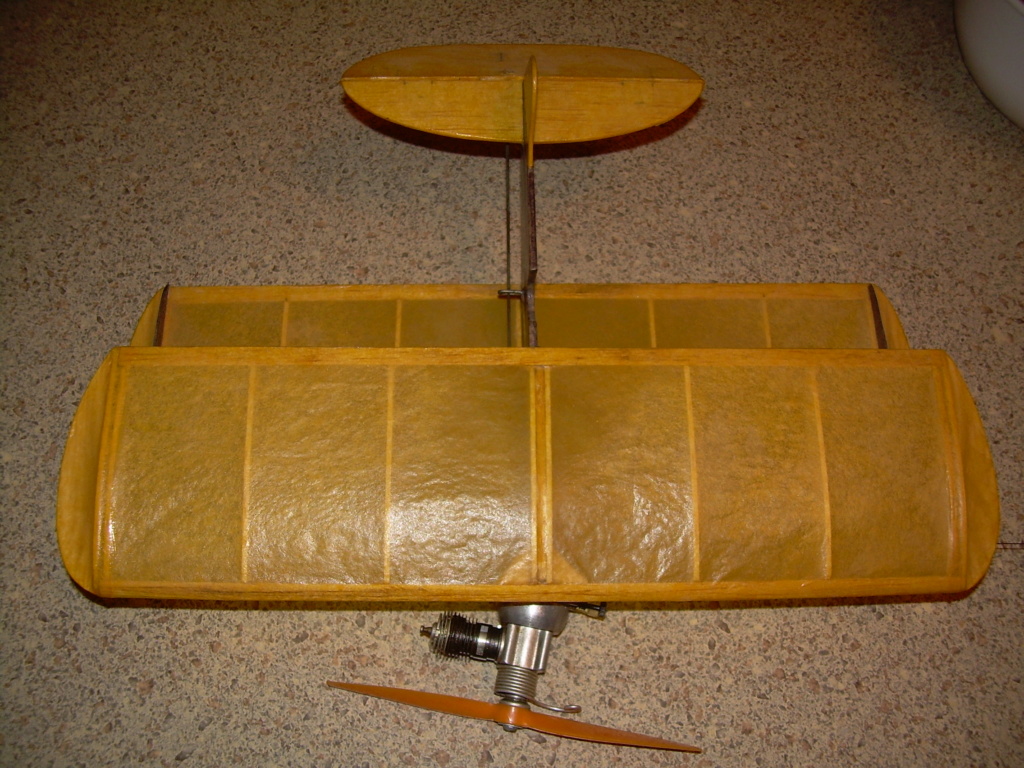 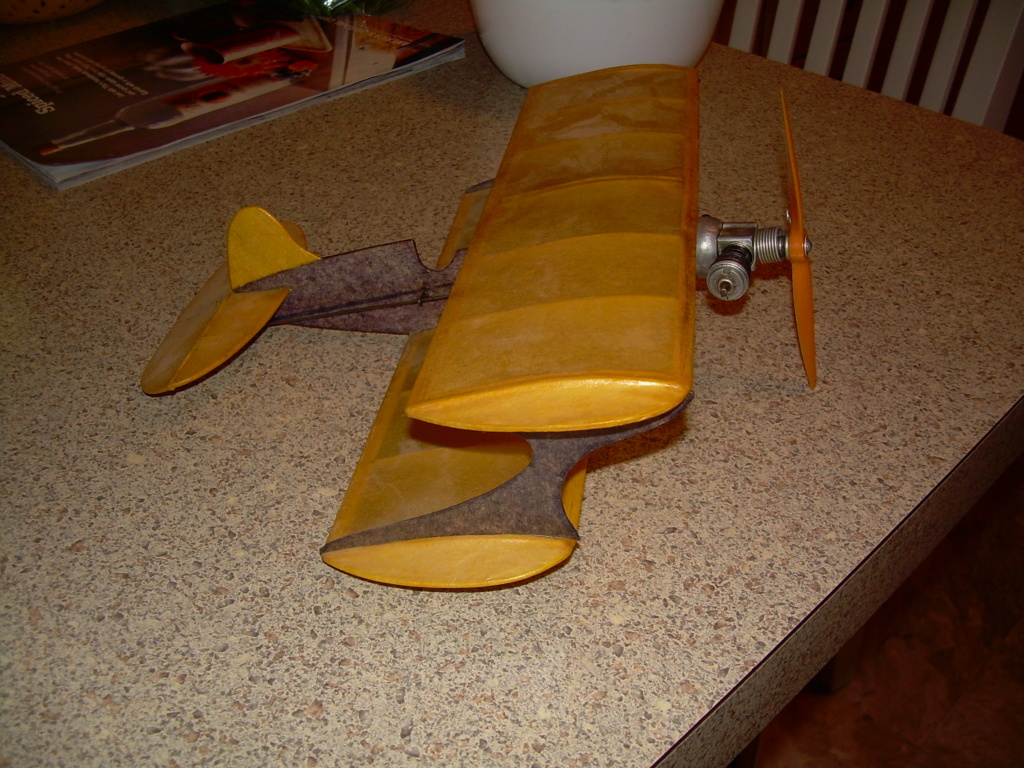 That is one cute Queen Bee! Brings back many fine memories.

I also have the plans, and had a copy of the build article from Flying Models around here somewhere. I built mine shortly after it was published in FM, and flew it on Cox Dacron lines. Don't remember that much engine offset on mine, but then I also don't remember what happened to the Bee, or that Pee Wee engine. Built mine with the original wire struts, tissue covered, and clear doped wings. Think I made both lines from one spool of Dacron, so they were probably 25 feet in length.

We were stationed at Lowery AFB in Denver, and had acres and acres of carefully maintained grass lawns to fly from. If I remember correctly, it never got any tissue damage from landing on that beautiful grass. The Bee flew perfectly with the Pee Wee, and I found out on the first flight that I could control the air speed by dithering the elevator. My wife and daughter loved watching, as I dithered the elevator fast enough to slow down to a near stall, and then hung it by the prop in a vertical hover. Dithering faster allowed it to descend to almost kiss the grass, and slowing the dither allowed it to climb out and transition back to level flight. The Bee was one of the few control line airplanes that I wished had more fuel capacity!

The Ranger 30 had sheet wings with sub ribs to form under camber. I never imagined it would fly out of sight, but also didn't know that Cox tanks had a pickup tube that could be in most any position. It practically flew off the board, so I timed a few tanks to judge run time, and then launched with an estimated 15 second run. Immediately after launch I realized that it didn't have enough side thrust, as it flew straight ahead, and the engine never stopped running! We jumped into the car and chased it towards the Bay east of Essex MD, and last we saw it was a tiny dot in the sky.

Found a fellow down on the beach with a power boat, and asked it he had seen a model airplane fly overhead. He said "yeah, I thought it was a full size airplane, but the engine didn't sound right".He knew it was running when it went over, and heard it a long while afterward, but finally lost sight and went back to work on his boat. He offered to go look for it, and jumped back in his boat, and chased in the direction it was headed, but returned a half hour later to tell us he never saw it again.

Larry was one of my model aviation Idols, and I sure would have loved to meet him myself. Glad you got to know him.

Going to shoot you some pics. of one i have .. PM

The Paypal payment should be there already.

Don't need a needle valve, as the backplate mount comes complete and ready to install.

OK good i got it , close enough couple bucks off but no worries . I should bee able to get it out tomorrow , got your address from PP Thanks Friend keep us up on the adventure

Your PM asked for $20 shipped. That is what I sent isn't it? What does "a couple of bucks off mean"?

I would never short change you my friend, so let me know if I read the price wrong again, and owe you more money.

If the Pee Wee is in top shape, I agree that it's worth more than $20, and will willingly send more.