Log in
Search
Latest topics
» Idk how to build.
by wingchicken Today at 7:18 pm

» Comments of this type of leadout arraignment
by rsv1cox Today at 5:09 pm

» Motor Starting Better One Way Than Another
by balogh Today at 1:07 pm

So I watched Kim's video of the unfortunate incident that occurred to his Cox Rivets, when it reminded me of a similar scenario to my new Christmas present. The year was 1971 when I received a brand new Cox Rivets as a Christmas present. What was surprising was that my older brother purchased the gift for me which was completely unexpected. Well, I thought I was pretty good at flying U Control having had good success with my Cox PT 19 Flight Trainer, so I anxiously awaited for winter to pass here in Wisconsin. Sometime in the early spring, I fired her up with a stooge and made one lap. Feeling good about the control, I then gave some up elevator into a perfect figure 9. I could not believe that it happened so fast. She came apart upon impact with the engine cowling broken along with a questionable wing. I picked up all the pieces and did the walk of shame to place it within the original box. I did order a new cowling and wing. All was forgotten about until watching Kim's video.

I stored the box along with parts for the last 48 years in the attic. When I went up there to look for it, it was nestled in the corner. Wow, 48 years...that's a lifetime for some. Here's what I found. I left the box in the attic. 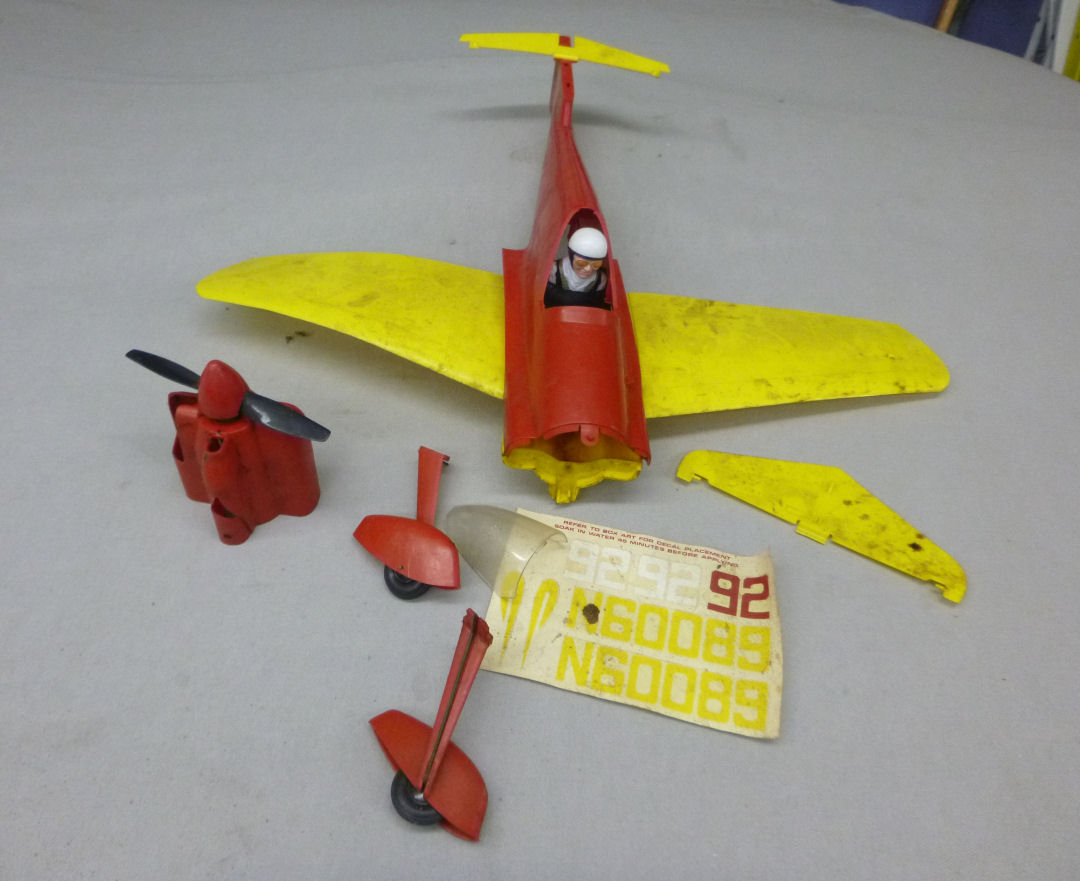 After evaluating the damage I decided to clean it up, polish and then try to reassemble the Rivets. This is a beautiful model, but not well designed to stay together. The landing gear is pressed fit into the fuselage. The engine cowling snaps over the front upper and lower fuselage held within close approximation via a nose spring. The rear portion of the wing hooks inside the fuselage. I realize that production costs were a concern with Cox and it is also considered a "toy", however I really don't think she'll ever see any flight time again from me.

I remember reading from Mudhen that the potential for this plastic to shrink may occur especially after 48 years. I followed his advice when threading screws into the new engine cowling lugs by heating the cowling lugs with a hair dryer and slowly turning the screws in and out of the engine lugs until they bottomed out. It was a time consuming process, but well worth the effort. The .049 was disassembled, cleaned, lubed and then re-assembled.

Then hours of polishing and finally applying some new vinyl stickers, saving the original water soluble decals for potential future reference.  Below, it's Christmas 1971 once again, some 48 years later. 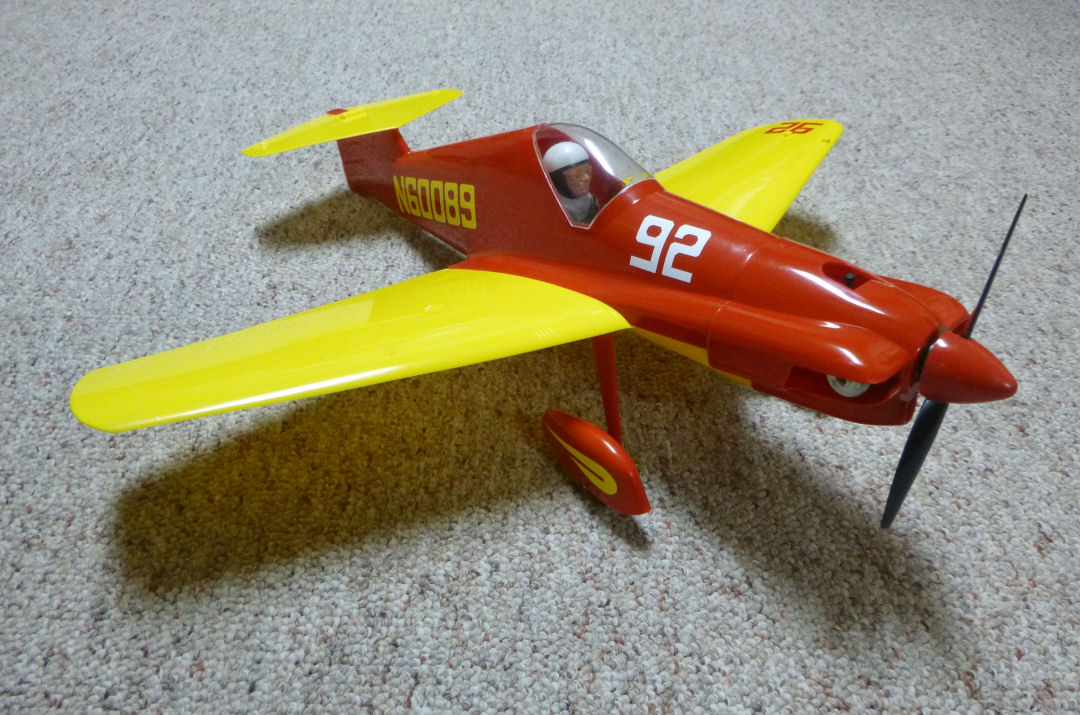 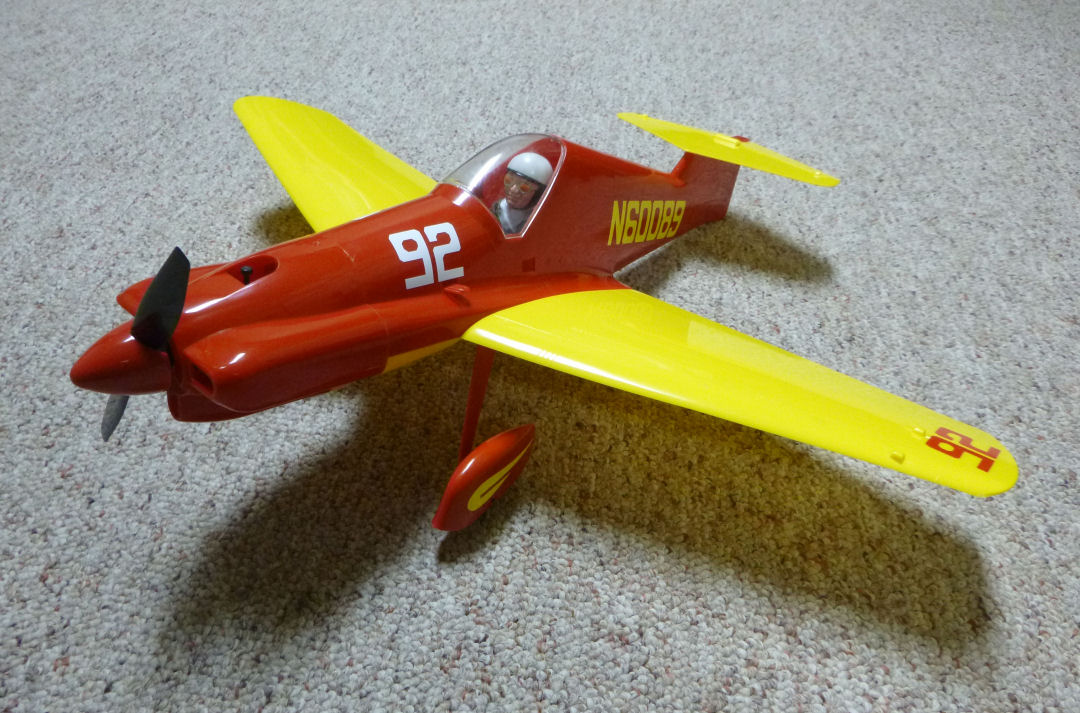 I would be hesitant to fly such a beautifully restored aircraft. What a beauty!

Wow. Great story, and the better fact that you still had it all this time! Then to top it off, the great job of the restoration of it! Thanks for sharing it with us here. You should be proud of what you did to that little gem.

Beautiful restoration, and a sure case of severe flashback for fans of this great little plane!

Thank you gentlemen for the kind words. Other people outside this interest many times just don't understand.

Kim wrote:Beautiful restoration, and a sure case of severe flashback for fans of this great little plane!

Kim, I noticed with your Rivets, that it is no longer a tail dragger. Any info on that? And how did you keep the landing gear attached to the fuselage?

DrCox wrote:Thank you gentlemen for the kind words. Other people outside this interest many times just don't understand.

Kim wrote:Beautiful restoration, and a sure case of severe flashback for fans of this great little plane!

Kim, I noticed with your Rivets, that it is no longer a tail dragger. Any info on that? And how did you keep the landing gear attached to the fuselage?

I was (and still am) wanting the Rivets to be an everyday flyer, and as in the video, want to be able to fly it off of pavement. So, it needed a tailwheel to keep the aft fuse from being ground away.

I THINK I made up a ply plate, held in place by carpet thread, soaked with CA, with the tailwheel wire run up through it.

I'll get it out tomorrow and check it. I've accumulated enough parts for another flyable Rivets and hope to get it going soon. 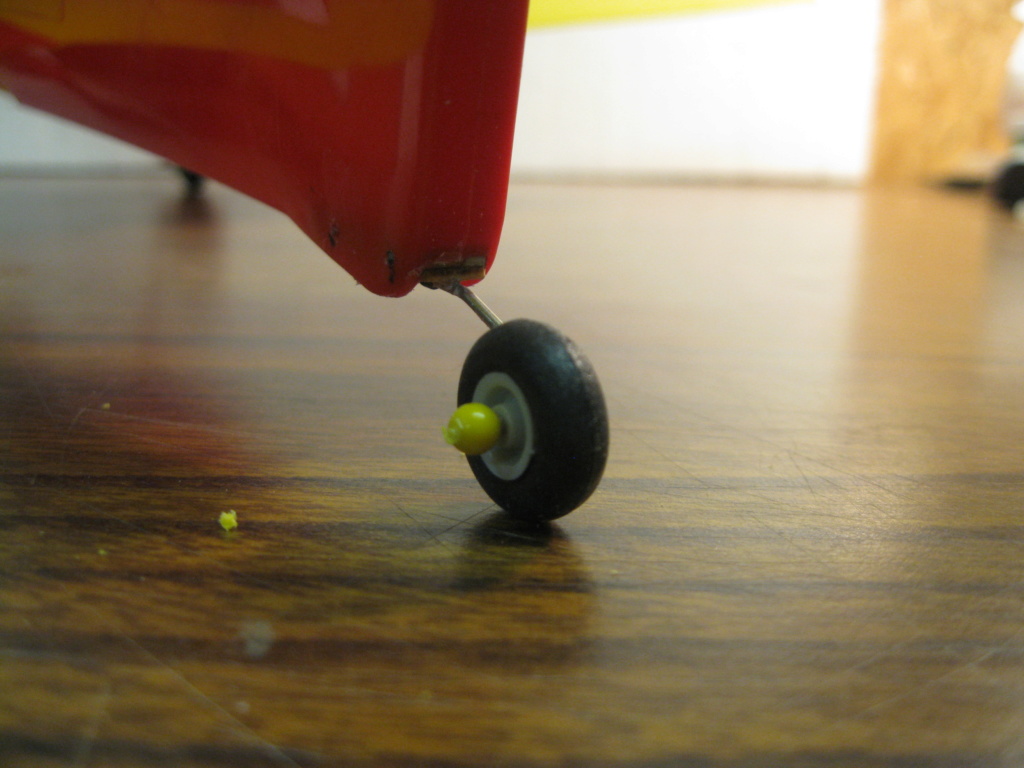 The Rivets is probably the most beautiful COX plane ever made in my opinion. I have never had the privilege of even seeing one in real, but this thread only convinced me more about that. Thanks for sharing and take care of this beauty. I also store some modeling stuff in the attic but mainly balsa parts. Attics can get very hot in summer and the 48 hot summers may have made their impact on the strength of molded plastic parts. So I agree this gem should stay on ground rather than fly again.

Beautiful restoration Doc. Your investment at the time in a new replacement wing sure paid off. I would think they are quite hard to find today.

The real Rivets was a slick plane that was very successful in it's class . Seen it here in Cleveland back in about 1977 . It crashed into Lake Erie and killed Bill Falck . The Cox model is a nice tribute to Bill and the Rivets .

(I posted a lot of pics on the facebook group)
The Rivets was my last (Christmas 1971) new plastic Cox plane and one of my favorite, i remember spending a lot of time just looking at it! It didn't fly very well other than long take-offs and smooth long landings!
New for '72 (late fall '71 for Christmas sales) first version had a spring starter system very much like Testors. This was quickly dropped to avoid issues, there was no cease and desist order by Testors. The plane was modified the following year with addition of brass nose weight, landing gear relocated and bellcrank to bottom. Not sure why it was discontinued after only a couple years, more than likely cost of production and lack of sales, the Super Sport filled the spot and didn't need a chunk of brass in the nose. 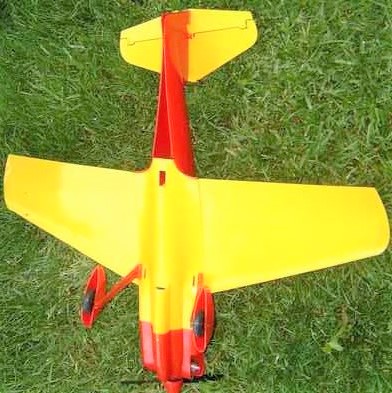 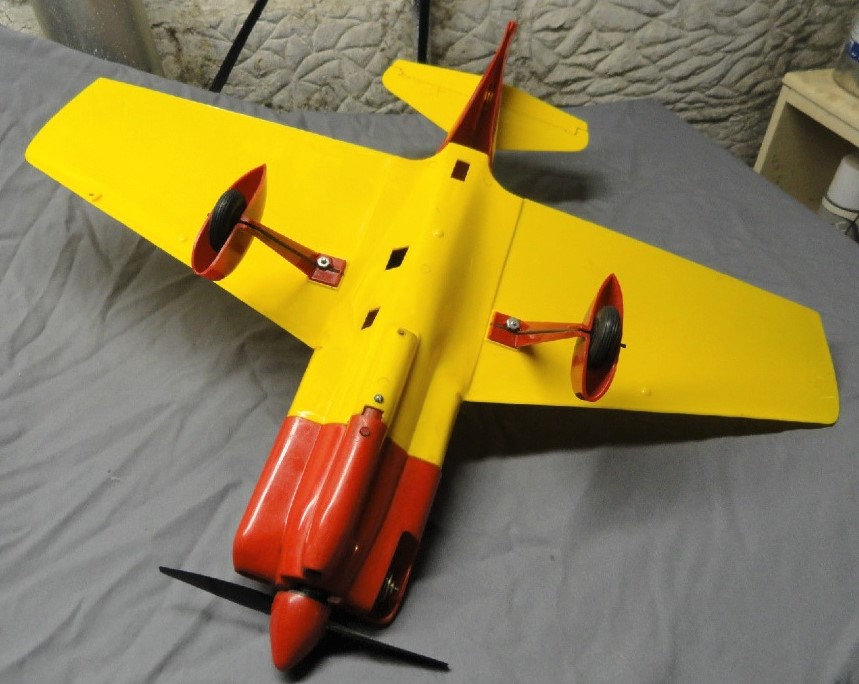 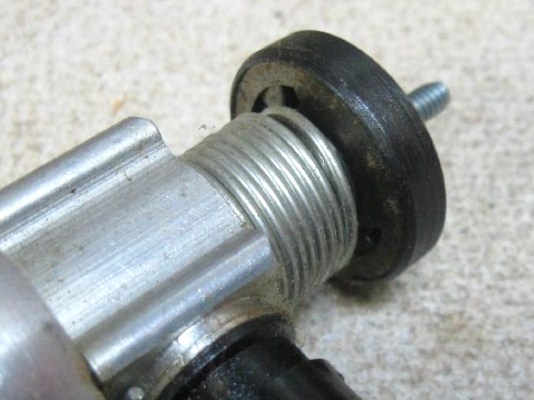 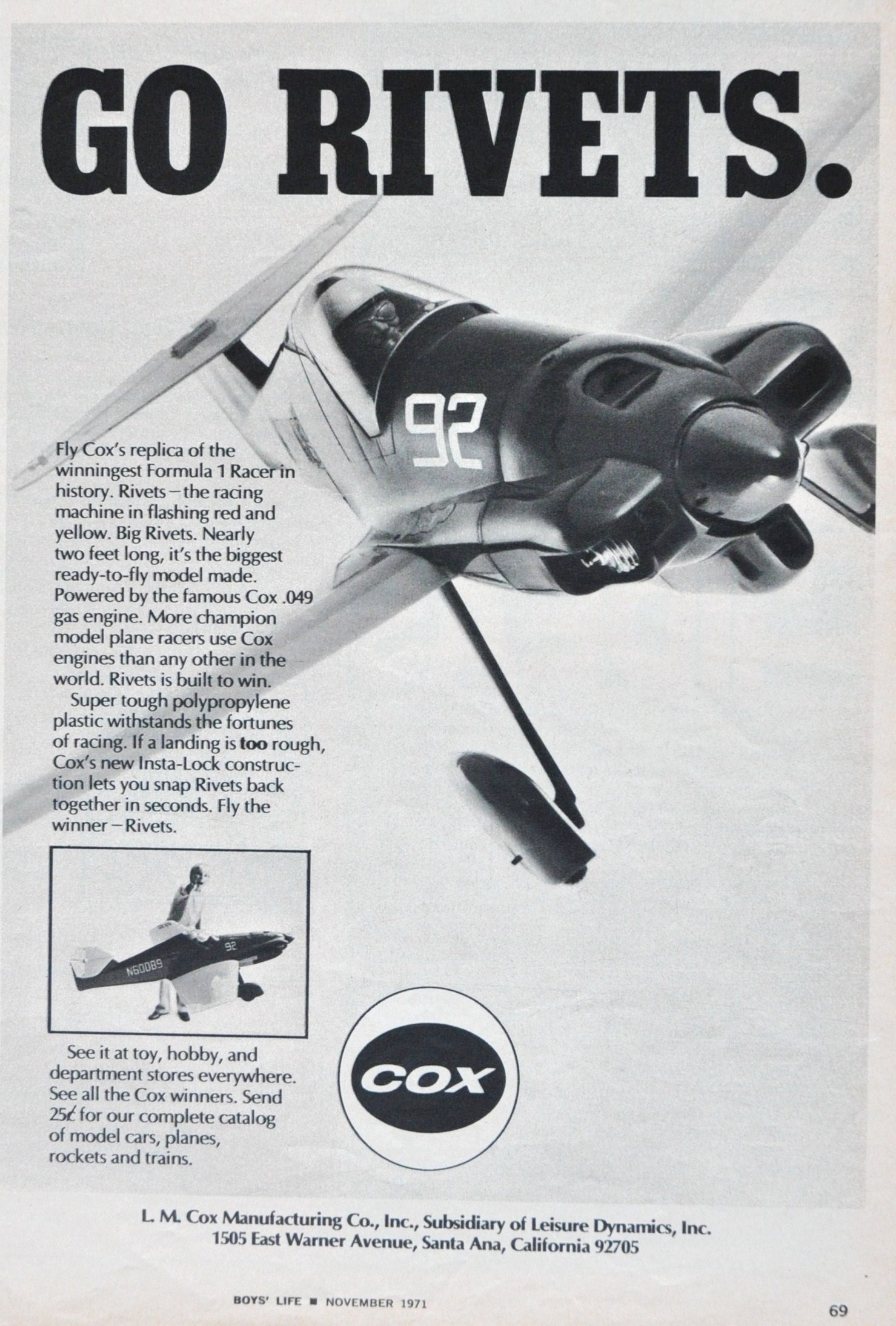 In the 1960's (for me anyhow), the baddest of the bad were the Mustang, the Bearcat, and Rivets!

I got to see it race at Sturgis, Kentucky---it's last complete race before it's fatal crash later that year.  One of the greatest "misses" of my life, I was running too tight to buy film for my little instamatic camera, but also didn't know it was going to be there.  I stood a few feet of the wonderful plane as Mr. Falck and his crew pulled it's cowling to do something to it's engine.

Since then, I've bought photo packs from various guys, and copied it's image from different sites on the internet.

This is one of my favorites:

Great story and ma you did a fantastic job on cleaning and getting her back together !

Wow, what a great story and even better ending. If it were me, I'd keep her as a shelf queen and simply tell that story over and over. But if you do decide to fire her up again, please post the YouTube video! We will be rooting for ya!