Here’s a new topic, broke off the “Great score of Goodies”  from the info provided by 944Jim Quote: I had the original kit sent to him. He did digitize it and cast a buck for the cowl. In fact, I ordered a replacement cowl for mine after the first crash. I never took the time to mount it. I also have all woods scanned, which is how I printed/cut and fixed the first crash.

I would love to build the kit just because I have enjoyed the other 1/2A Scientifics.
As far as casting bucks goes, the plastic needs to be dry and clean. The plaster is mixed to the consistency of a heavy cream-based soup. The plaster is then poured into the "mold" and allowed to dry...about a day or two. I kept the "molds" on the mantel over the old gas log fireplace (actual pilot-light/not on-demand ignition). The warmth of the fireplace helped dry out the plaster. The easiest way to tell is weight! Once the casting stops losing mass, it has gotten as dry as it will be. Then pop the buck out of the mold. I did have to use a bit of force to remove a particularly difficult pour once (the Guillow's Mosquito engine nacelles gave me fits). A bit of compressed air helped...not too much, or the mold may burst! Just a low pressure pfft!
Use your favorite DIY vacuum plate to pull replacement plastics!

Dave did mention that molds are good for so many cycles before the plastic starts to deteriorate from flexing out the bucks. And I learned they pull out easier if something is embedded in the plaster, like a thick pull string that can get cut off after removal.
End quote.


SO, hows this look so far? Here’s the turtle deck and engine cowlings: 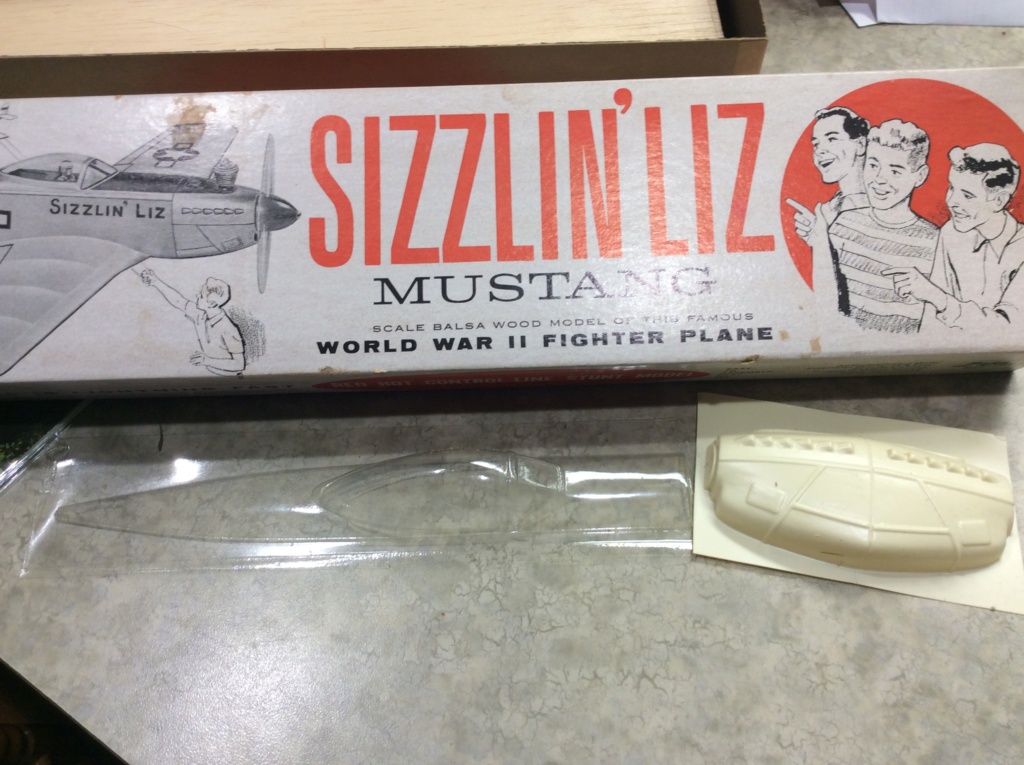 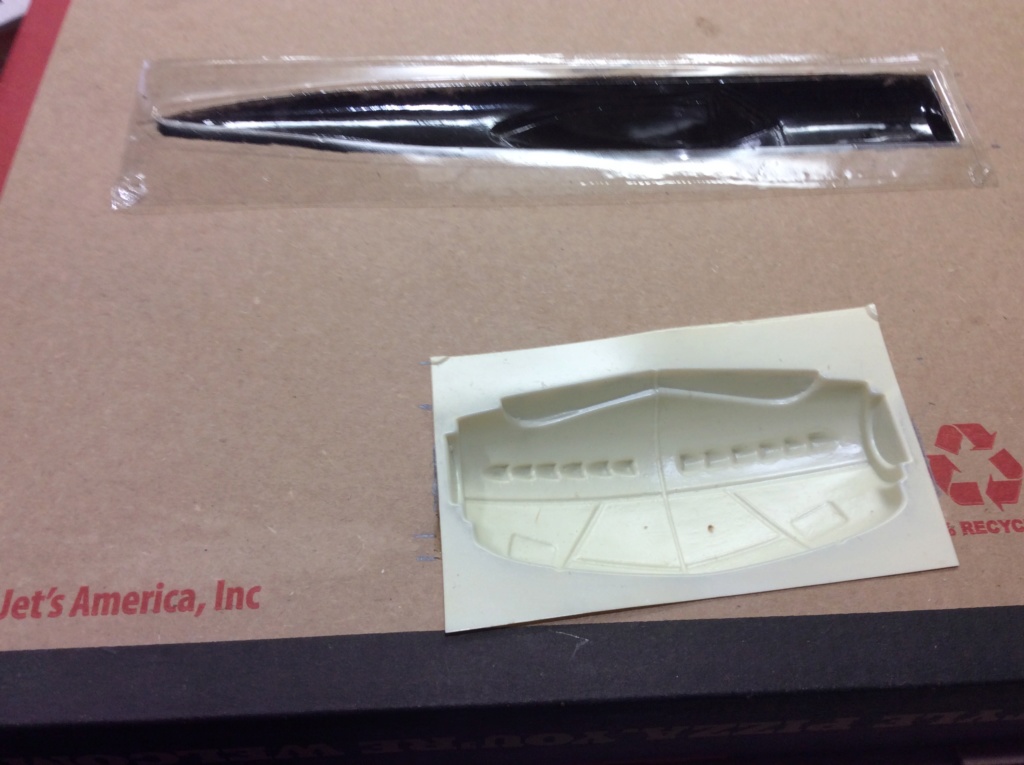 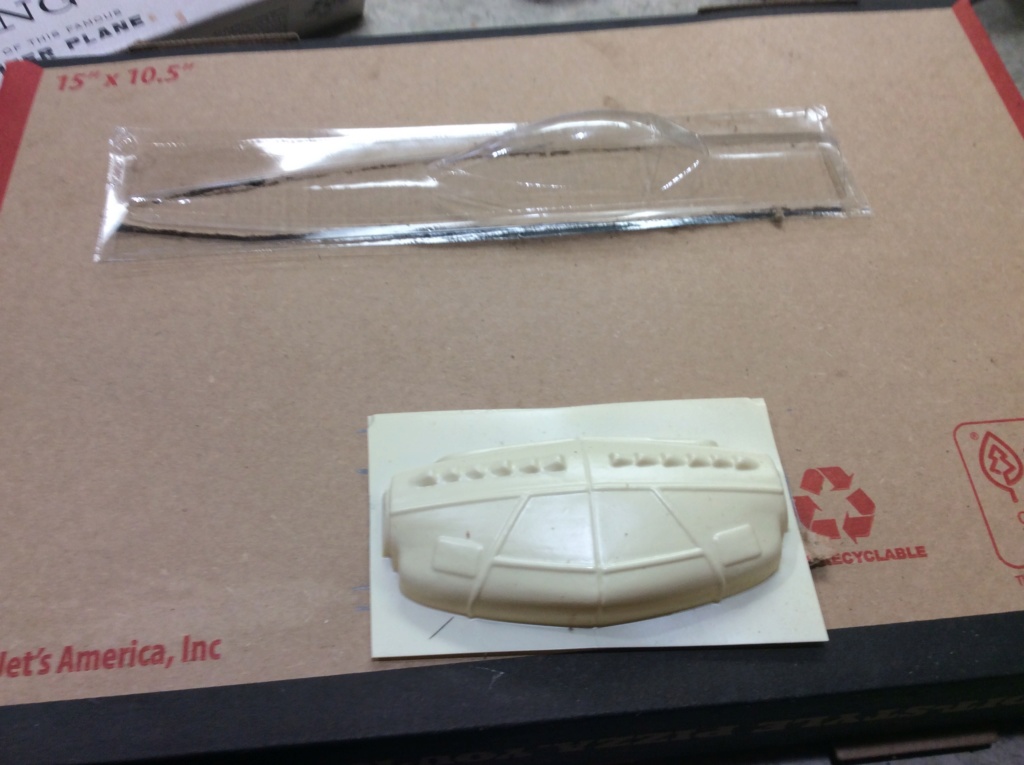 Next step is to clean and wax the insides of the “molds” for mold release after the plaster dries.
If anyone has any ideas or helpful hints,  I’m listening!

Re: Sizzlin’ Liz, bucking the Mustang

Try a couple runs in a cheap plastic Dixie cups first. That way you'll get an idea of the removal process.

Once you have a couple of pulls with different plaster consistencies you'll get the hang of it before the "real deal."

A couple of old socks with dried beans or uncooked rice make great levelling bags. That way you won't need to keep cutting cardboard to make mold rests. Just pop the molds on the socks.

Leave the casting in a warm area, no direct heat or significant sunlight so it doesn't dry out unevenly. Oh, and practice how much plaster to mix by filling the "molds" with water, and then dumping the water into your mixing bowl. That way you know how much volume to mix before hand. You will want a bit more than "the fill" so you can't fall short. Adding more later causes a weak zone between the two batches.

I filled to just a bit more than scraped level...it is easier to scuff the mound from the back of the casting down to the break line if you go 1/16"-1/8" over full. Really, once the plug is done, having a bit of excess shoulder isn't a problem unless it creates a significant "negative draft" which makes removing the replacent plastic/pull from the buck (after vacuum table work) a bit tougher..

I scan the woods full size, and scan the build sheet in overlapping sections. The sections get stitched together in visual stitching software. You need to look for the setting that does "flat scan stitching" not Panoramic. Panoramic does the perspective/rounding/vantage point simulation to smooth those digital pictures with different depth perceptions (think mountains and valleys as opposed to the two-dimensional plans sheet).

Once woods are scanned, I remove the parts from the woods and manually trace the parts into white paper with a sharp pencil or very pointy pen (to get right on the cut edge). All of this gets scanned. The plans are then adjusted up in size to larger paper so the image can be adjusted to final size. Adobe Reader has a measuring tool that you can use to measure a few dimensions so as the picture is re-sized and saved, you can validate final size.

I hope that makes sense.

Marley, PM your email...I'll send one your way so you have an example. I have about 4 hours into scanning/digitizing the P-40. Well, all but the plastics.