Log in
Search
Latest topics
» Building a gas powered windmill and now a boat
by davidll1984 Today at 9:08 pm

» "Forcing My Brain To Learn Things It Doesn't Want To Learn" Still Messing with the Dragon.
by andrew Today at 6:50 pm

I managed to shot a vid today on the Quickie 100 Racer, with the 1974 red postage stamp back-plate COX 049 reedie in its nose, beefed up with a Kamtechnik turbo head, and spinning a APC 4.5 x 3.5 prop. Fuel is 60/20/20 all-castor..Sunny day, air temperature a tad below 10 Celsius, Northern winds. Couple of people walking their dogs nearby, so my flight path was rather limited...(March 15th is a National Holiday in Hungary, but rallies in Budapest and all cities were canceled because of COVID19 concerns, people came to the field instead to enjoy the spring sunshine)

The plane is very quick and does all the aerobatics an amateur like myself can and wants to do, from loops, cork screw spins (sorry if my terminology is not correct), wing-overs etc.

I audio-tached the video and measured engine speeds well above 24k incoming and outgoing passes both (i.e. Doppler or not, the engine unloads faster than 24k). This puts the theoretical speed of the plane - calculated from the prop pitch and rpm - to around 130...145 km/h and makes the Quickie 100 the 2nd quickest plane - after the TeeDeeVooDoo - that I have ever flown.

Also, the theory of copper reed valves tending to float and limit COX engine speeds below 20k does not seem to hold.

Very Nice . Looks like fun , I plan to do More 1/2 flying this year

akjgardner wrote:Very Nice . Looks like fun , I plan to do More 1/2 flying this year

Thanks, I am happy to have fueled your flying ambition with the Quickie..

yes, a bit chilly but beautifully clean weather, "what can a poor boy do???"...other than flying COX..

The field is full of sharp and crop-cut dry grass and weed, that made their mark on the bottom side of the foam wing, despite the Oralight cover...I will have to add an extra layer of transparent cover, or wait until the soft spring grass grows....what the heck, that is still weeks to go...so I will cover the bottom side and continue flying into March.

Hello András !, it is a great flight! .... the model travels very firmly and the engine is always on even.
I really liked it, I also see that you have great flight autonomy to have a good time!
At the end, I note that with the engine planted (stopped), the model has the ability to float and land on the ground in a very smooth way. Congratulations again, you have put together a very good set and you will enjoy a long time !!

Thank you very much Mauricio. The plane glides superbly and I put its nose into the strong wind upon landing, hence it decelerated well.

She was Screaming , had good maneuverability too !! I see your field has landing paddies

Thanks Eric, I would rather call those landing paddies molehills!

Thanks for the video, great flying, very good pilotage

Thank you Levent! Despite the sun the air is bitterly chilly, otherwise I would still be out flying ..

What is the Weight ? Wingspan ?

Thanks Brad..with all these speeds that our engines are exceeding 24k I wonder why COX suggested 24k as max for the 049 size machines? Or was that only for the TeeDee that produces more torque there than the reedies and hence the crankpin of the TeeDee gets overloaded?

The all up dry weight is 266 grams. Add weight of about 40 ccm fuel. The wingspan is 58.5 cm, and the exact geometry of the plane is described in Tasos' Quickie 100 pylon racer thread.

Static 24-25k is because back in the day they used larger dia. props and weighed more.
The size and mass put a given stress on the engine when ran statically.
I have flow 33,100 rpm with a TD .05 / 4x4.5 prop no issues, then again the plane
weight is 8.2 oz and very lean.  Modern day RC gear and unloaded in the air is different
then flying a 5x3 - 6x3 prop on a control line plane. No drag from the lines heating up
the engine and loading down on the crank pin.
37k rpm with a TD .020 unloaded free running in the air no issues with a speed plane.

Wow Andras, that thing cooks!  I never thought a reedy could turn up like that.  Very nice flying.  Tasos should be very happy with your review and proud of his creation.  Thanks for taking the time to share it with us!

Thanks Dave, yes, assembling and maidening the Quickie 100  were really joyful for me. In addition, my 46 years old 049 reedy also got an important task eventually..

I am not familiar with reedy performances in combat applications like the mouse race but was also surprised how in a matter-of-fact way that 049 squezed out the 28k from itself. This has a stock  No.1 cylinder with 2 bypasses and the only extra it has is the Kamtechnik turbo head.

I am glad you enjoyed the video, it is always rewarding to read positive responses from fellow CEF members! Thank you.

This is a highly entertaining video of a model exhibiting smooth performance from launch to landing phase…Yes I am very satisfied of results as all design modifications and efforts during construction really paid off.

Andras is clearly a dedicated modeler as he carefully prepared the model to be highly reliable… his tuned/steady and powerful engine run also shows he is a knowledgeable engine man… he made the model shine in flight so good on the sticks too!

I would like to congratulate and thank him for his good efforts!!! Also thank you all for your kind comments throughout this project presentation… they are inspiring!

Thanks Tasos, while I enjoyed the assembly and am a proud user of your Quickie, this is also  my humble contribution to upkeep the unbreakable fame of COX engines, be it a modest (???) production engine like the beautiful red postage backplate 049 that attracted me to the hobby initially, or a superb Teedee of which I can never have enough..

Unfortunately my building skills do not even come near to yours and those of many other members here , but at least my videos of my crazy amateur flights that qualified RC model racers can only frown over help  strengthen the affection  of others here towards these unbelievable toys.

....and that sharp bladed APC also took its toll on my fingers even if I used the spring starter... 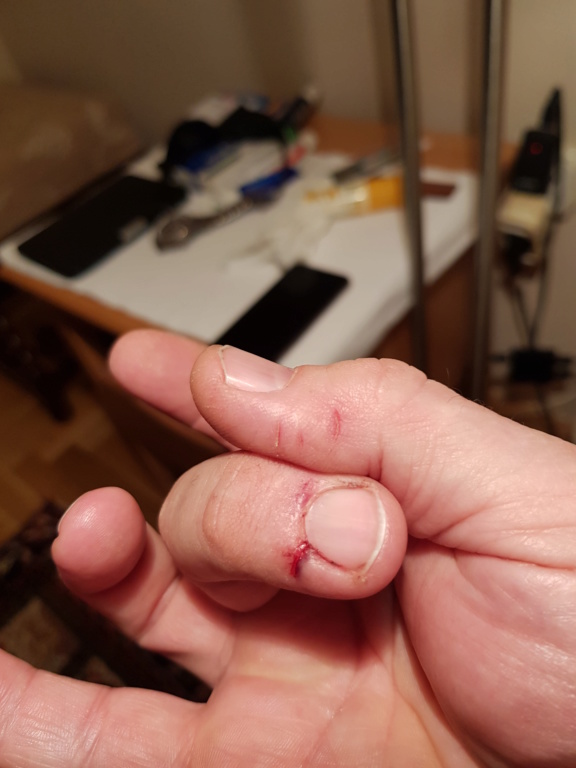 Andras!
I know I'm being repetitive, but you and Kim still hold the honor of being the only people who inspire me to read entire flight reports of their R/C adventures and expeditions while making me smile the whole time. And that's no knock at all on the sport, just crazy old Rusty the C/L nut talking. That was exhilarating as usual. Amazing performance from the power plant, airframe, and pilot, all three on song from beginning to end.

How much fuel was onboard when you cranked up, and what kind of head... I should re-read in case you told us already. I don't think a #1 cylinder is any slouch, even compared with a #4. I've never seen it mentioned, but I know from my own measurements that some(but not all) #1s have more deeply ground bypass ports than others. I had a pair of BW jugs that were different depths from each other and both were deeper than either of my only 2 Super Bee jugs.

Boy thats a screamer!..I'd get a two second flight out of that ,and it would be that last I saw of it !

Rusty you embarrass me with those kind words and by putting my reports on par with Kims.I feel honored , honestly...

That red postage backplate is a special engine...just a stock production machine out of a Stuka broken by a prodigal German classmate of mine back in '74 , who gave it to me without knowing what thrust it will have on me moving towards engineering (instead of medicine that my parents both professed as doctors) and this hobby...and the same thrust on the Quickie now

A step wall No1 cylinder, really nothing special...I have a few of these engines and all deliver the same power - except one wirh a thin wall No.2 cylinder that has only one bypass.

The turbo head is what Greg aka gkamysz has developed and is selling on kamtechnik.com out of Chicagoland. Having normal turbo (not Nelson) plug with metric thread, I get replacement turbo plugs for it even in the few hobbyshops surviving here in Budapest, unlike the Nelson/Galbreath plugs.

I pumped fuel about half of a 60ccm syringe (I get them in vet shops, probably used for vaccinating relatively young elephants) into the baloon tank, and this shot is good for a near 7min flight.

I am proud you liked what I scribbled and shot with that archaic camera if mine.

OhBee wrote:Boy thats a screamer!..I'd get a two second flight out of that ,and it would be that last I saw of it !

OhBee your concern of losing sight of the plane may have something to do with the visual deceit of seeing it on a screen of a laptop or a phone..in reality this small bird is relatively well visible a few hundred meters away against a clear blue sky, even for me with a pair of 4.75 dioptry glasses. I am not saying I can remove my eyes from it without taking the chance of losing it..on that event I would probably add an up elevator command because a rising path might make it visible again..but I hope this will never be the case.