» Engine Display Stands - Coming Soon!
by EXModelEngines Yesterday at 9:48 am

» Electric Cox. I don't know why. Caught my attention.
by rsv1cox Yesterday at 6:55 am

One day I was corona-bored and decided to bounce around ePay.
I came across this Miss America P-51 from the early 70’s. (About 1973-75.)
The seller was asking $125.00, which is low for the model, especially in good to mint condition. 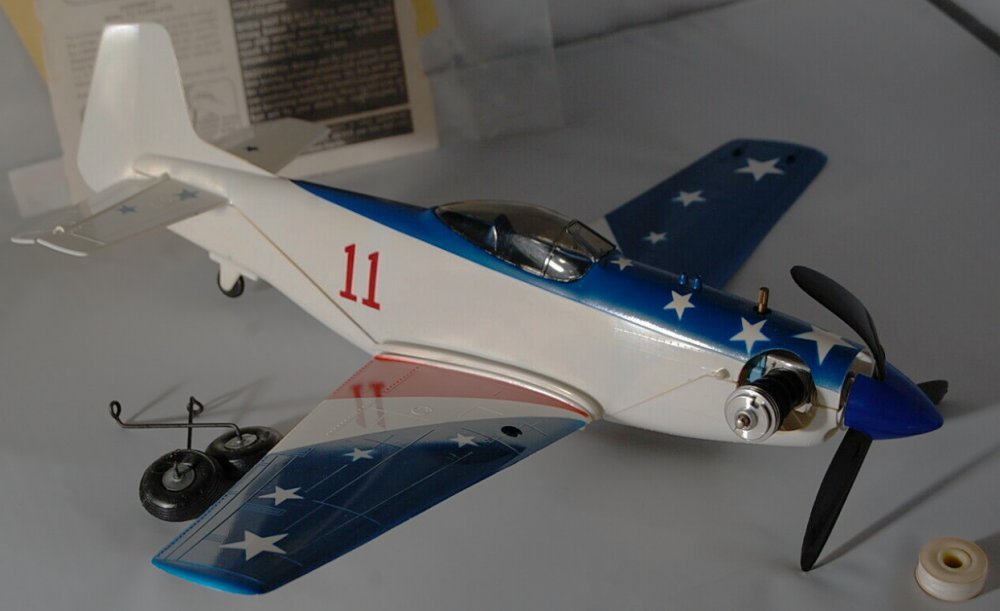 While flipping through the pictures, I remember thinking,
“Wow, this is a nice airplane…beautiful paint, blue back plate, nice patina, no fuel stains…
“Wait…blue back plate?!?!?”
I was never able to figure out the blue back plate. It seemed to have a different blend of Delrin than what Cox used for the early 290 engines.
The blue, I thought, resembled the red composites from the late 60’s to early seventies. But, I wasn't sure.
Dan Sitter couldn’t figure them out either. Without any concrete evidence, who can blame him?

Well, happy me. The airplane came in today, and it is gawgeous. Brand-new. Moreover, I have no reason to think it is not authentic.
Conclusion? Boss airplane. The blue back plate was in production, at least in the early to mid-70’s while the Miss America was manufactured, but on a limited basis.
So…why blue? Oftentimes when Cox planned a transition from one assembly type to another, they used an intermediate color, identifying the transition, until the new production assembly entered service.
I know the Miss America used both the red 290 back plate, and the white. Though conjecture, it seems reasonable Cox used blue as an intermediate until settling into the white.
This was way cool. I not only received a sweet model, but a bit of history thrown in with the deal.

Nice find. I’ll have to keep and eye out for this. I’m still missing a blue backplate in my collection.

I do have 3 of those .020 tanks with the never went into production reed holder. They all came from the .020 cars with the heavy crankshaft so it seems these were in production for a little while.

Hi Jason,
I know the tank front you're referring to.
It's not a reed holder, but a steel thrust plate. You're right, it was in production for a limited time. (I have a Camaro NIB with this assembly.)
It still used a circlip for the reed, but the O.D. of the reed housing was slightly less than stock engines.
If you look at Dan's picture you can see the cross bar from the circlip.

But Mud, it has a bent prop.

But Mud, it has a bent prop.

That is a Beautiful Miss America !! I Have one of those blue plates somewhere LOL I think i had ask about it awhile back and was told it came from this plane , Good Deal Mudhen !!

rsv1cox wrote:Let me play CNN here. But Mud, it has a bent prop.

If I were responding to CNN, I'd reply...
"It figures you'd miss the forest for the trees. Try coding!!!"

Admin. We need an emoji showing a "mike drop" moment. Then  insert it after my response to CNN. 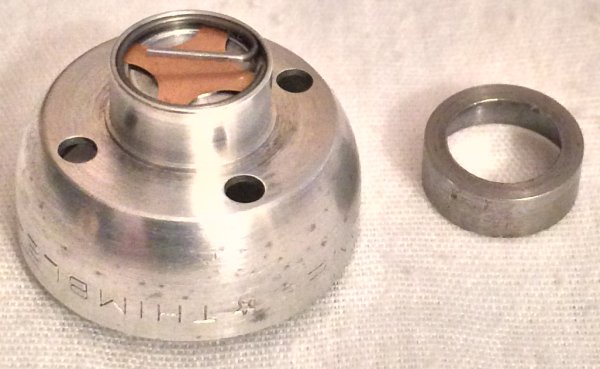 rsv1cox wrote:Let me play CNN here. But Mud, it has a bent prop.

If I were responding to CNN, I'd reply...
"It figures you'd miss the forest for the trees. Try coding!!!"

Admin. We need an emoji showing a "mike drop" moment. Then  insert it after my response to CNN.

Yeah, if anybody can find a cloud in a rainbow, it's CNN.

You may want to read the bottom and top right on page 49 of Dan Sitter's Cox Model Engine Handbook, strangely stating the blue backplate never went into production..so Mudhen must have something of a rarity with that engine! 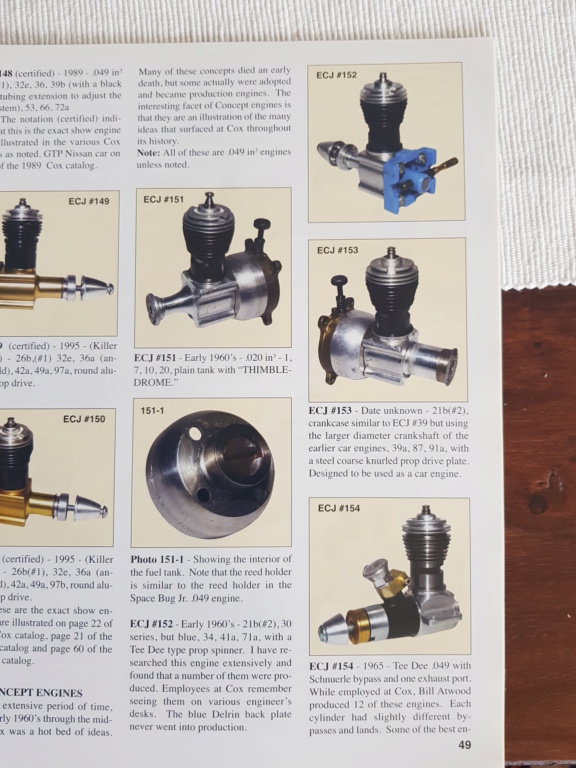 Thanks for the pic. I never took mine apart to see that it was just turned down. Makes sense it was added as a thrust plate on the car. I do have 3 of them. 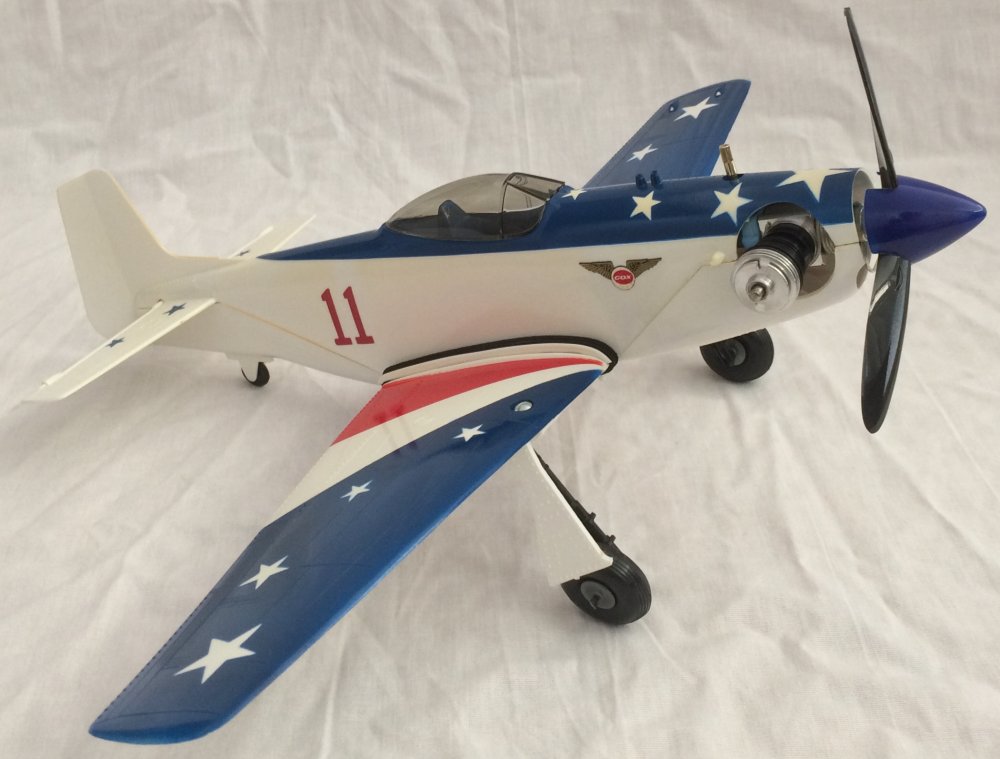 The restoration went well. The airplane is definitely new. No fuel residue anywhere. It’s never been run, or flown.
It had some minor shelf-wear that I wet-sanded. Also, it has mild sun staining. But to avoid damaging the paint, I just let it be.
The engine does not have “W” filament, which Cox discontinued in November 1972. It has a stepped cylinder that Cox deleted in January 1975.
I’m not sure when the Miss America was discontinued, but the blue backplate came somewhere between 11/72, and 1/75.
Pretty cool for $125.00

That's the one Cox airplane I really wanted but never got. I suppose because it's sort of a mix of Cox, air racing and Evel Knievel. Very cool, Mud. Thanks for sharing your good fortune!  And for sharing your extensive knowledge.  It really is most appreciated.

Mudhen wrote:
I’m not sure when the Miss America was discontinued, but the blue backplate came somewhere between 11/72, and 1/75.
Pretty cool for $125.00

Beautiful restoration, congrats. I found in the COX models database of Martin Happerle 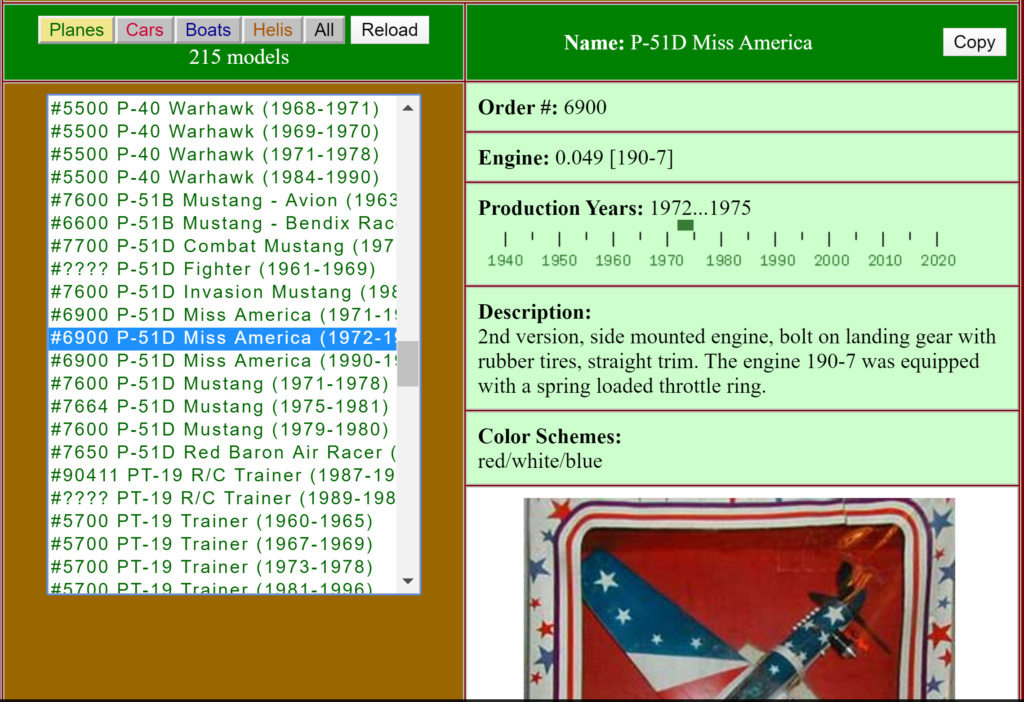 Looks like it might have rested on one blade of the propeller but the rest of the airplane looks straight. I imagine you replaced it with an identical prop. I have sworn off plastic airplanes, but had I noticed it I might have given you some competition. Love the P-51 models.