Log in
Search
Latest topics
» There are more and more new  cool engine models
by Yabby Today at 5:54 am

Mines going in my next build!....sorry.

My engine has a stamp under the mounting-lug 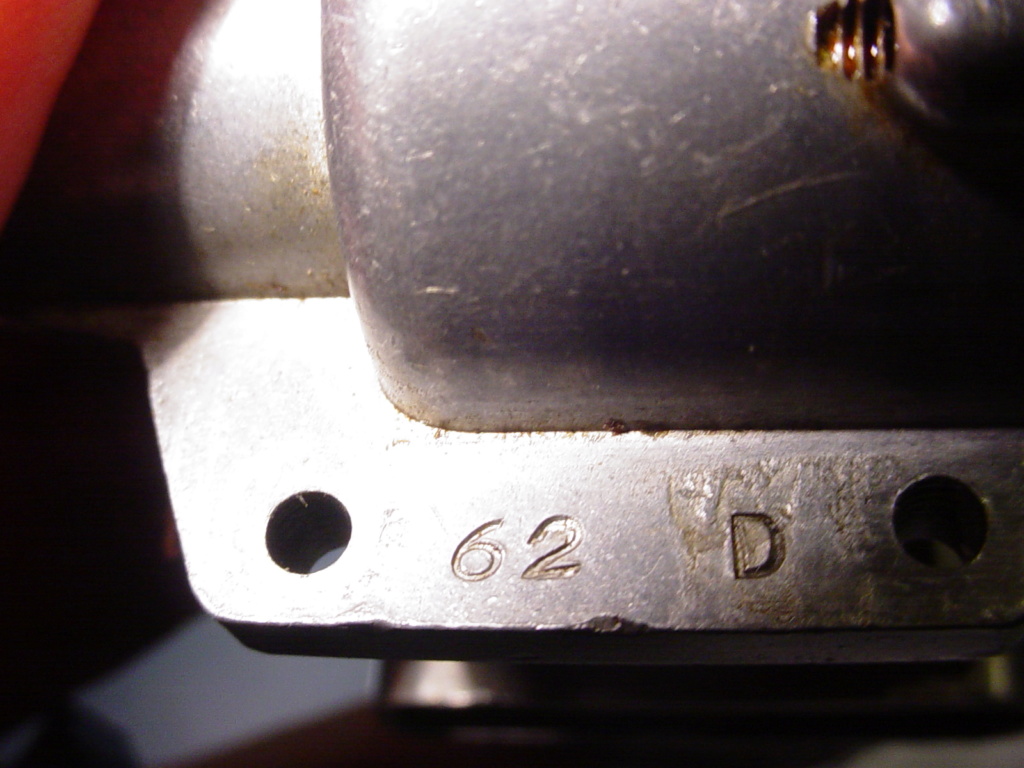 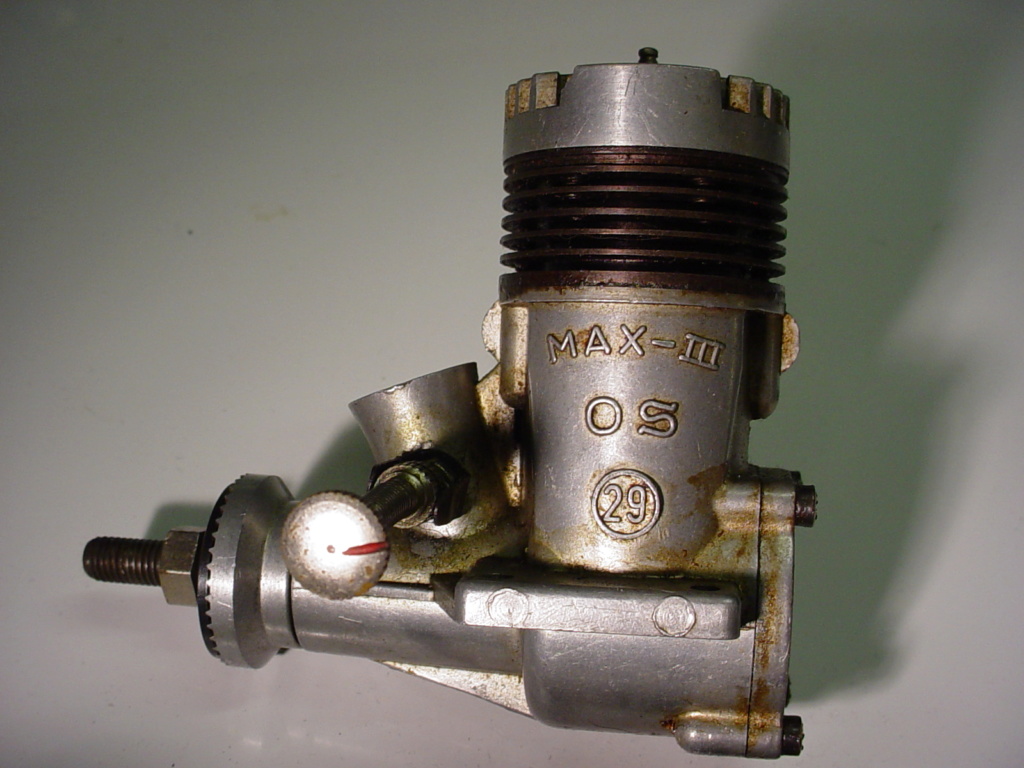 My uncle gave me the engine. I'd never asked him about how it was used. He has given me a lot of his 1960's vintage C/L stuff.. so I'm not sure "why" he'd sourced the OS Max-III .29 He's still with us.. so I should ask him. He was into the C/L scene when it was.. in the late 50's.. through pretty much all of the 60's.. and focusing primarily on precision-aerobatics and combat-stunt. He is a USAF Vet. 68-72 who worked as a F4-J Phantom-Jet mechanic in New Mexico/Thailand.

It was popular for USAF Vets to engage in the hobby back then. He may have sourced the .29 "used".. from a fellow serviceman. I'll have to ask him..

That would be it Roddie. Nice example you have there. I was always a fan of them but man they're a real pain in the rear to start when they get hot. The steel sleeve just retains the heat and doesn't offer compression until it cools down.

My engine has a stamp under the mounting-lug...

I don't really know.  I'm only aware that per my friend, the "Max-III" that is on the side of the crankcase is necessary to meet the requirements of the NOS FF contest CD's.  All the OS's that I've owned have been after the Max-III line was discontinued.  But assuming that the "62" might have any association with the year, it would be about right.
Thanks for taking the time to respond.
Jim

I retired from Holloman AFB in 1975 and was in the Flight Test Organization for the last five years of my career. We had an F4 test airplane that I believe was based at Albuquerque?

To which base was your uncle assigned?

Our F4 was used during captive flight testing of the Maverick missiles, as was our C-130 (also based out of Albuquerque).

I retired from Holloman AFB in 1975 and was in the Flight Test Organization for the last five years of my career. We had an F4 test airplane that I believe was based at Albuquerque?

To which base was your uncle assigned?

Our F4 was used during captive flight testing of the Maverick missiles, as was our C-130 (also based out of Albuquerque).

I'll send a pm to your CEF inbox

smooth_bill wrote:I retired from Holloman AFB in 1975 and was in the Flight Test Organization for the last five years of my career. We had an F4 test airplane that I believe was based at Albuquerque?

Back in the early 1980's, then again the late 1980's, worked at McDonnell Douglas Aircraft Corp, 3855 Lakewood Blvd., Long Beach CA 90846. I was employee badge #316218. Worked for Structural Test Laboratories in Bldg. 41 Test Hangar, 2nd floor of the office complex adjacent known as Bldg. 41A. I did test systems software for load servo controlling and data acquisition for our minicomputer based systems.

Bldg. 41A: 1st floor was Flight Simulation Lab, 2nd floor was Structural Test, 3rd Floor was Flight Test. All the windows in this beautiful windowed building were epoxied over in black, because during the cold war building was used for military projects, which then were considered hush-hush.

At the downturn of aerospace in 1992, I left the company just after New Year and went back to Fed Gov and facilities management.

Interestingly, I was on annual training with the Army National Guard in Roswell, NM (where they say aliens reside - well, they probably do have aliens but well, to be PC I better stop

Guard facilities was next to the airport (old Walker Air Force Base - closed in 1966). I was training to be a member of the aged Vietnam era Chaparral track vehicle with 4 surface-to-air (air-to-air if on planes) sidewinder missile turret so we were bedded adjacent to the airfield. Lo and behold, I was surprised to see the DC-9 flight test bird, only airliner with McDonnell Douglas logos and wording come and do several touch and goes. This was in the mid 1990's. This was about when the company was changing hands from the McDonnell family to Boeing.

Then in summer 2005, during facility management training in Long Beach as a Cannon AFB employee here in Clovis, I drove past my old former employer. All I saw was a chain link construction fence surround, with piles of debris where the buildings used to be. Only building left was the C-17 manufacturing building across the airport on the south side and the DC-9 / MD-80 / MD-90 (DC-9 derivatives) hangars across Lakewood Blvd. to the east. (There were traffic lights and crossing where new aircraft were taxi'ed across the boulevard. Bldg. 41 was a pile of debris, along with all of the DC-10 / MD-11 facilities, huge paint hangar, may be 4 or 5 football field long 2 story Engineering Bldg. 35 with a short bridge to 36. The large multi-story administration building (think 10 stories) on the corner was also debris. All these facilities bordered the north side of the runway.

Those DC-9 and derivatives manufacturing hangars didn't last for long. Seems the MD-90 derivative rebadged as the Boeing 717 died in 2006 with the lack of an interested customer base. (Airlines don't care about the model or style of the bus, my guess is that the plane could not garner customers because it could not be built cheaper or fly cheaper than other equivalent aircraft.)

Interestingly, Boeing contacted me about a very small pension I had earned with my limited years at McDonnell Douglas when I reached their retire age at 60 six years ago, that I had forgotten about.

Anyway, your mention of flight test brought back some memories I had as an employee of aircraft testing. I actually participated in the early portion of C-17 prototype testing, in the airloads calibration test to proof that the fuselage was capable of maintaining cabin air pressurization.
Interesting stuff when I look back.