Mark has four or five of these. Bringing one over tomorrow to run for the first time. Ought to be interesting. 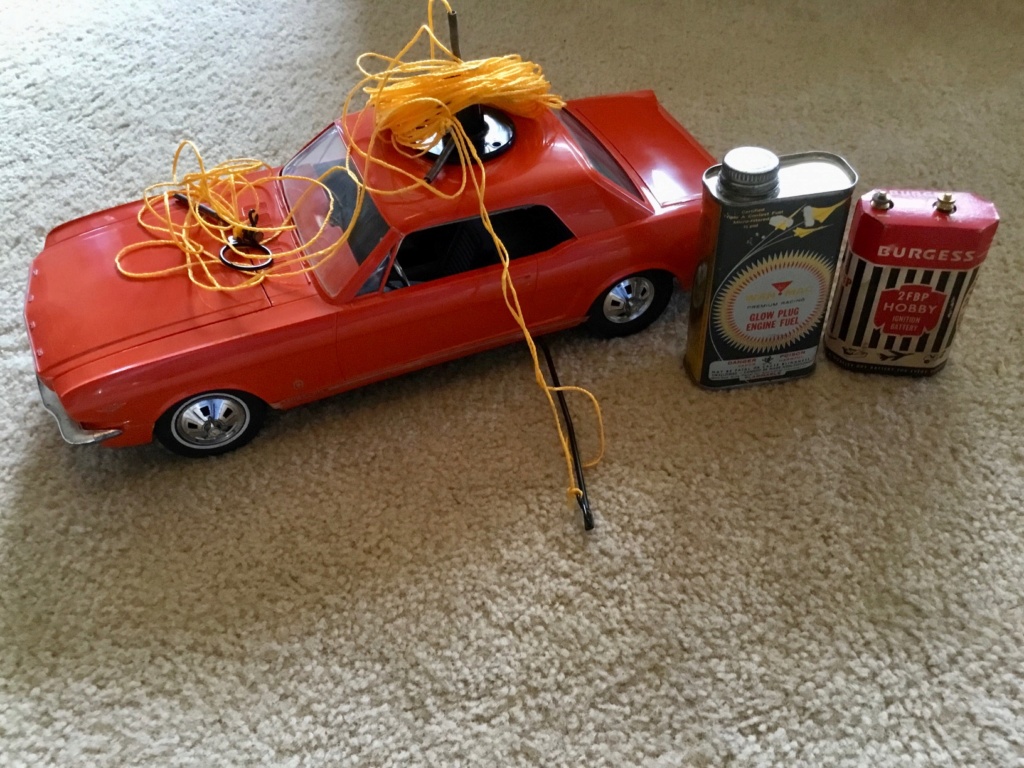 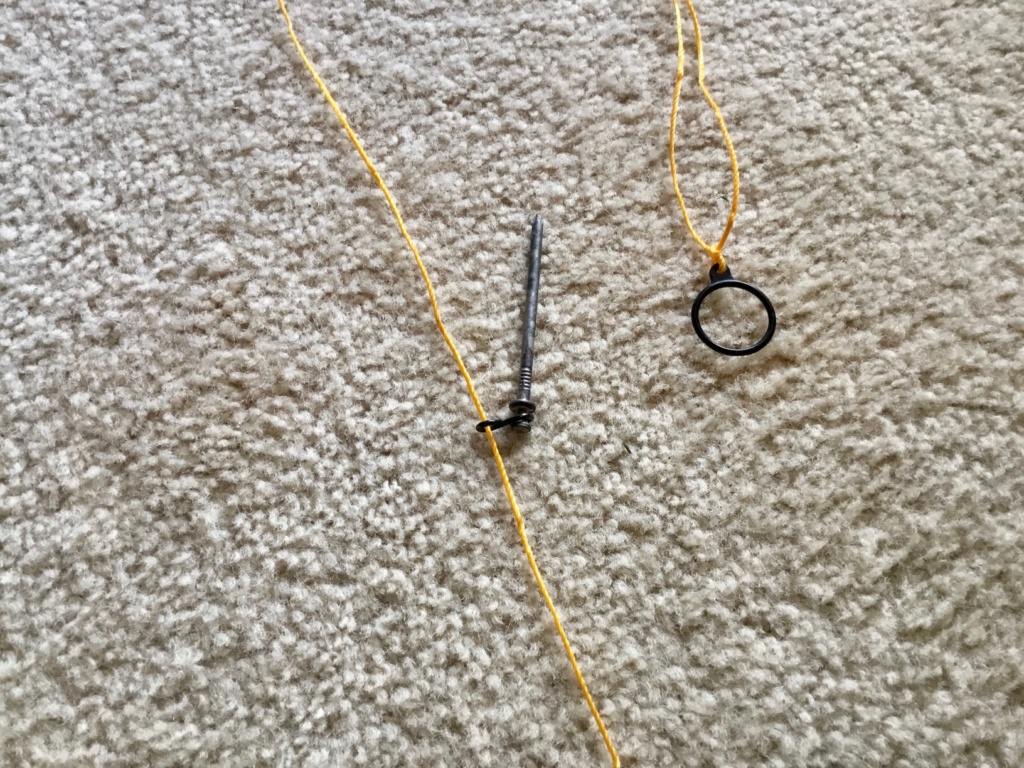 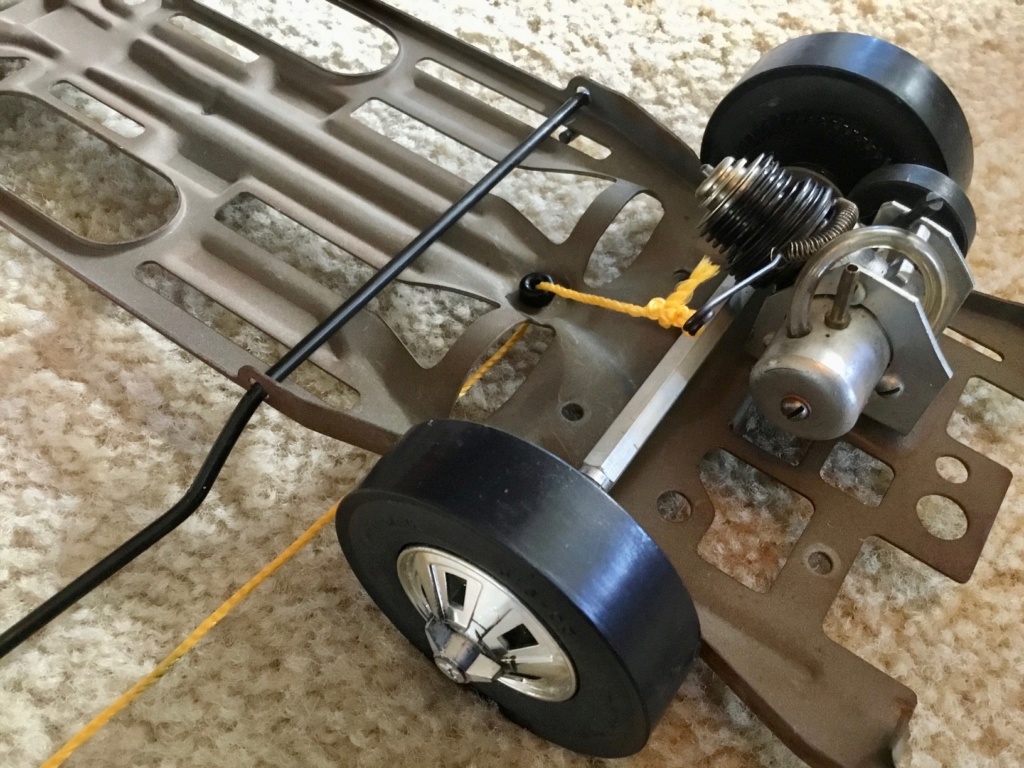 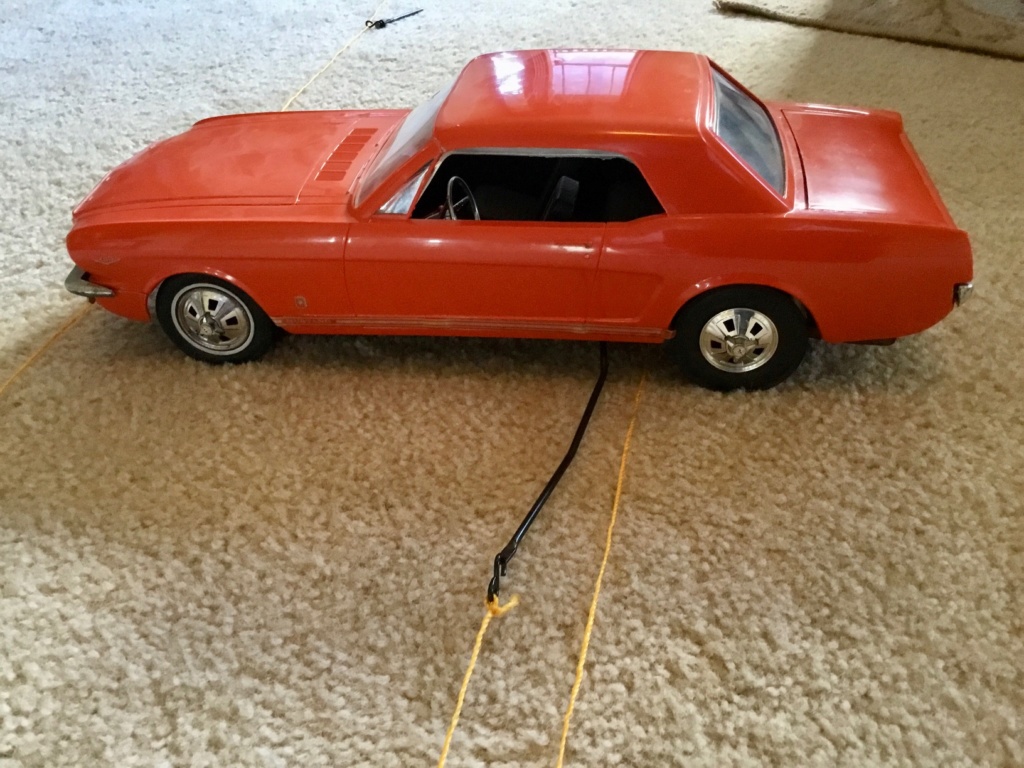 That’s right, Mark is a Mustang collector! I have seen a old TV advertising video of the AMF lotus racer and Airplane with that “speed control “ I think Mark Boeson posted it some time back. I think it is going to be interesting to see how well that pull string throttle control works with out pulling the car towards the center of the circle.
Should be a ton of fun!!
https://m.youtube.com/watch?v=qzls1EtwsP4

That is just too cool. Throttle control without a radio. Should have been a blast back then.

Hope you get a video of it running and feathering the throttle.

Very nice looking car, and very neat also having a throttle control. I am also assuming it is a .049?

Mark will probably capture it on cell phone video...……..if we get it running.

Fun day once we found the needles sweet spot.  Wen Mac started easy with good throttle response at the bench.  Complicated throttle arrangement defeated it's purpose and the position of the throttle control line presented problems at the launch.

First successful run was quite good after a couple of false starts, but the car kept running over the throttle control line threating to pick it up.  Didn't but it did drag it a bit resulting in the tether line  getting tangled with the throttle line which wrapped both around the tether dragging the car inward with each revolution.  The kit and instruction say to use a supplied S clip to fix the throttle line direct to the asphalt but the car still has to run over it.

Tried it again with the same result.

Pulled up the S clips from the asphalt and I just operated the throttle eye level while the car went under it.  Mark videoing it. Still the tether did not work well and the tether string kept wrapping around it.

Three runs first being the best, I would guess about 20-25 rotations until the car ran out of fuel and the line tangled.

Wen Mac motor runs really well, and started for the most part right now. 5 or 10% Traxxis fuel, forget which.  The hood on the car kept flying open as did the trunk lid.

Mark protecting me from the dreaded virus.  Told him to take the stupid thing off which he never did. 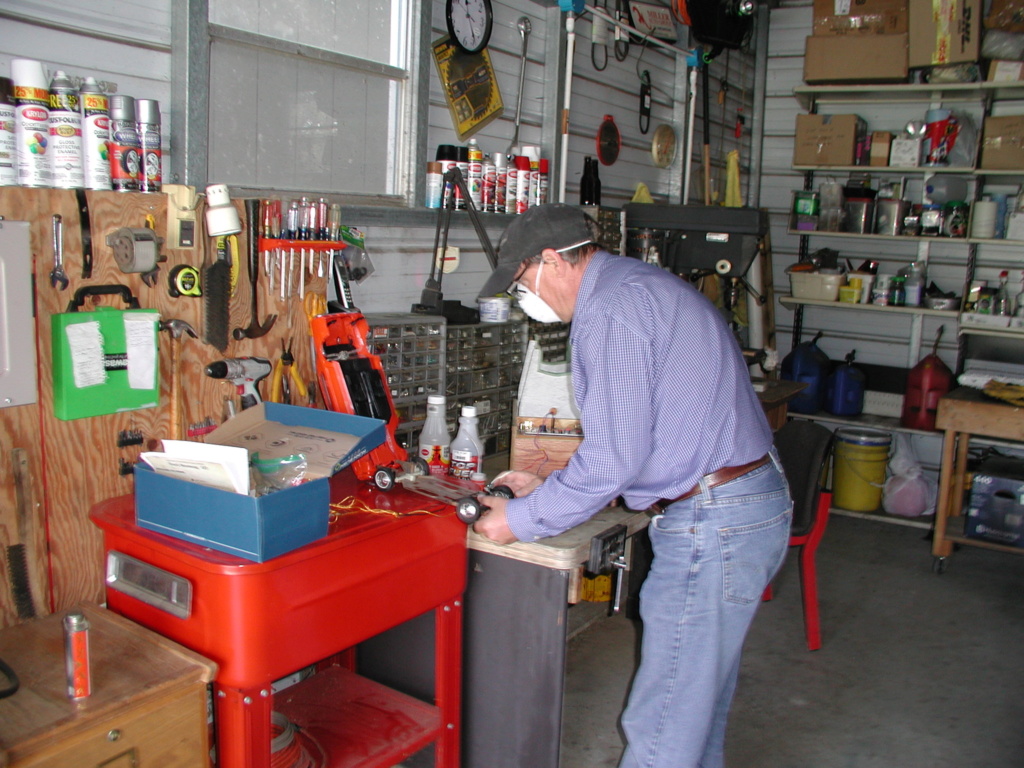 Nails on the tether were pounded all the way down prior to launch. 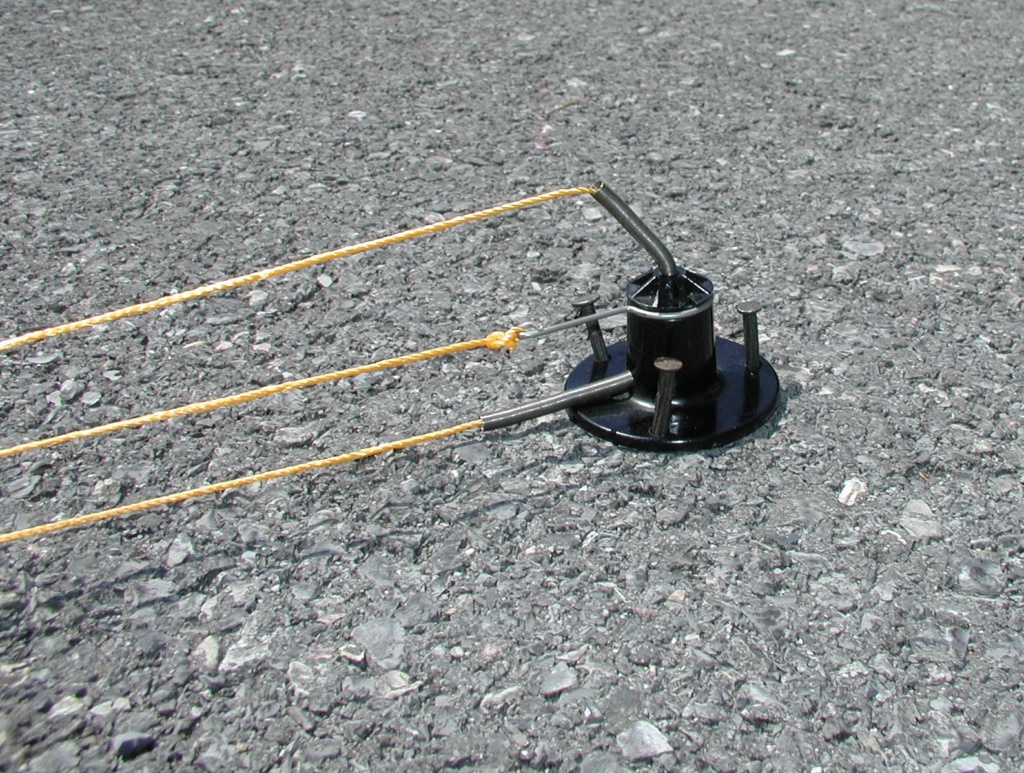 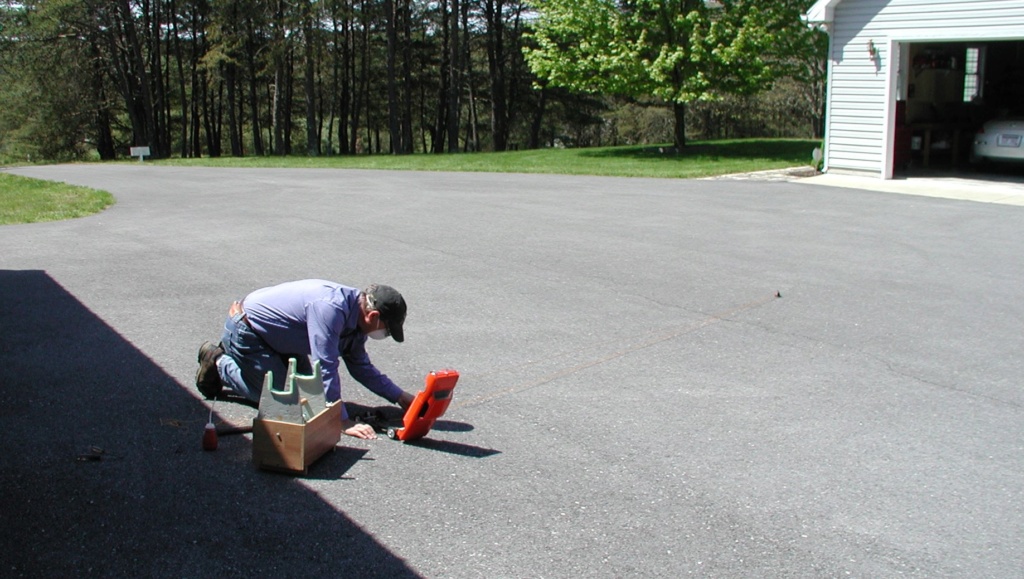 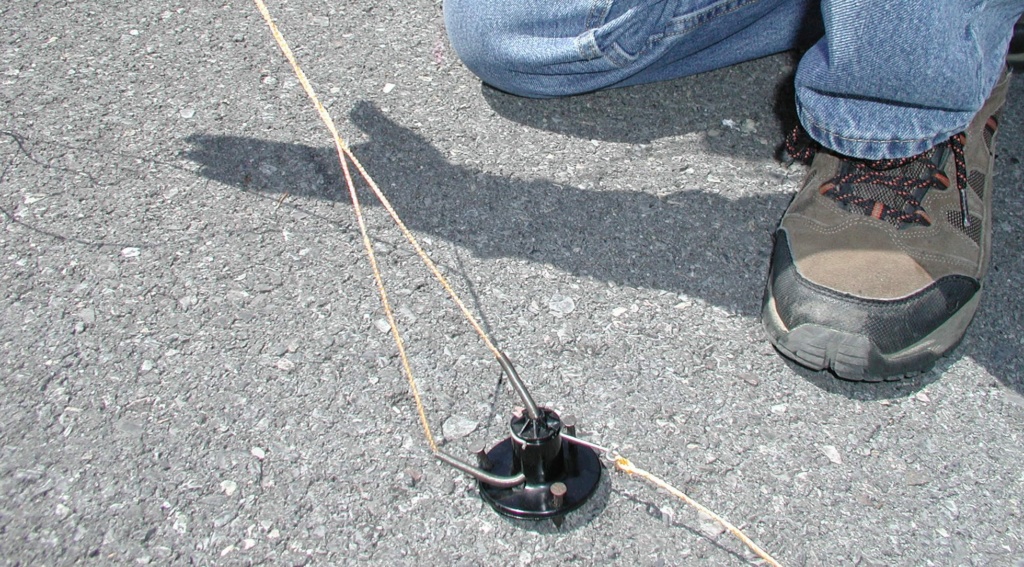 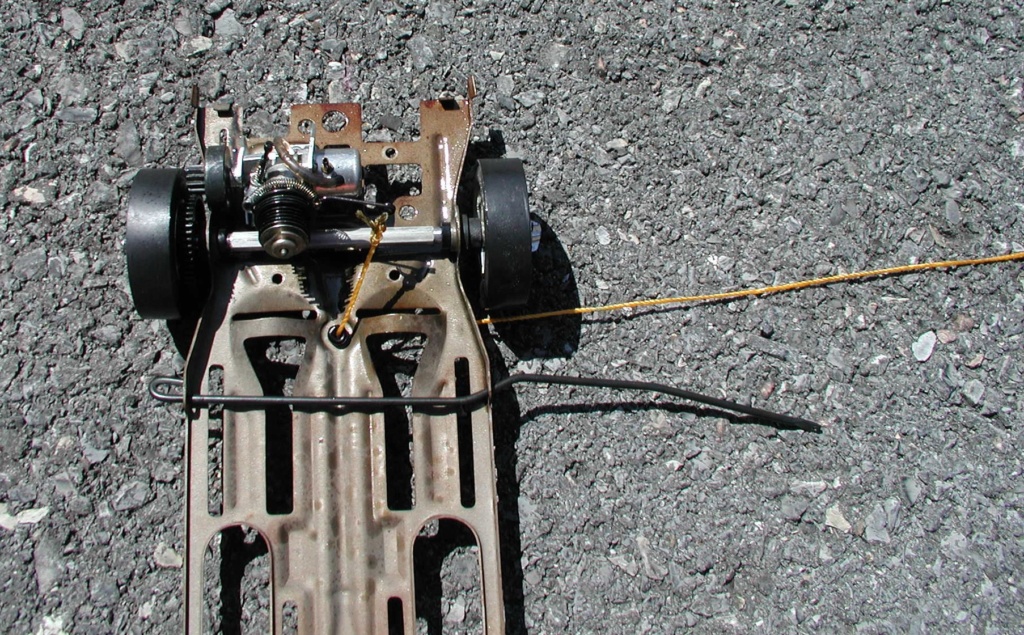 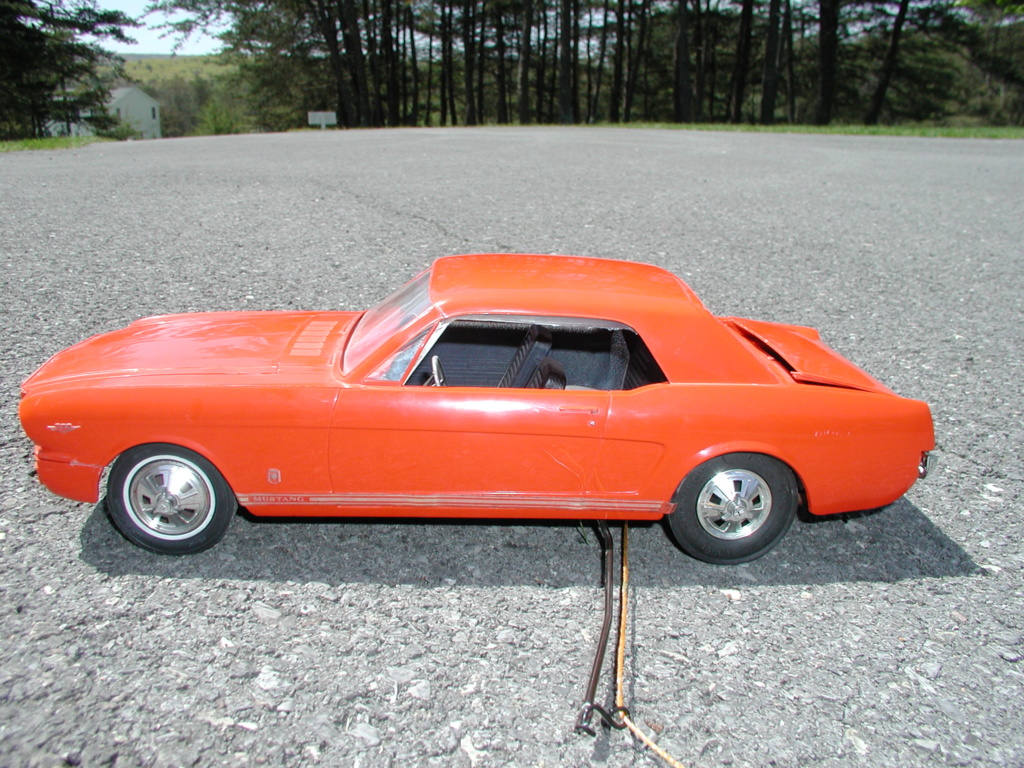 Very nice Bob. Glad that you were able to get together and run it, as well as having it start and run good for you. I have never seen a tether base before and it too looks very interesting. Too bad that it was having issues with the tether though.

Looking at the pictures, mainly of the one with the tether spiked to your driveway. It appears that the driveway has a 'rougher' finish on it. If it does, is there a posibility that the throttle line was catching a rough spot starting the winding of the lines?

A possibility Chancey, but we got the same result when I held the throttle line up at eye level. The problem is in the tether. I'm going to modify my Cox Mercedes tether which should resolve the problem. The Mercedes was simple to operate, a single line to the bridle and that was it, but no speed control.

Mark sent me videos this morning. It goes around the circle at a pretty good clip, but not at the speed of my Mercedes which flew flat out but no speed control.

Cool Beans ! thats a interesting set up no doubt

Yes, as everybody knows Wen Mac made virtually the same engine for throttled airplanes. Mark Boesen also sent me a CD with lot's of Wen Mac information that I refer to frequently. 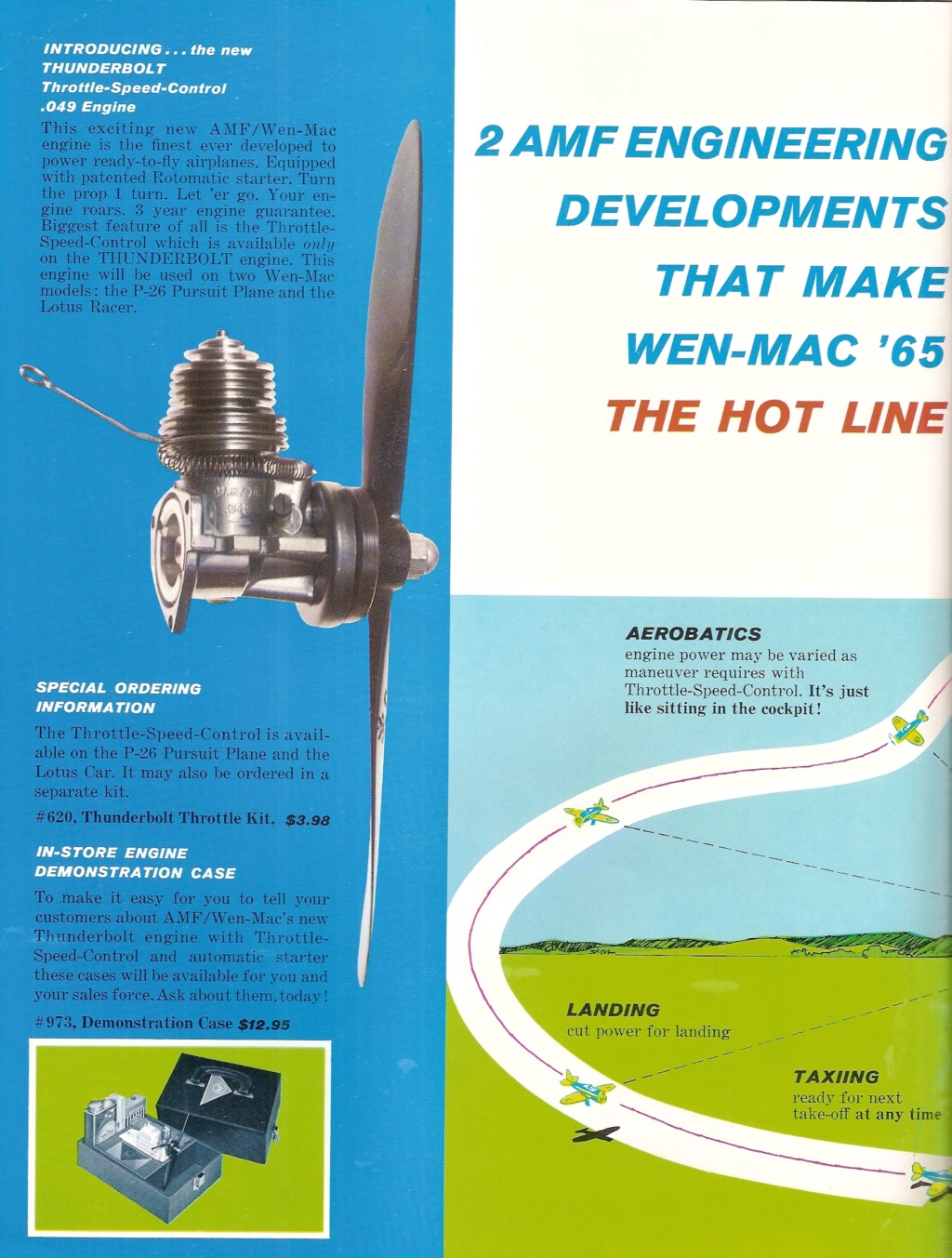 I have a couple of them.

Can't say I'm thrilled with tether cars. Nothing like the hands on feeling you get with a model airplane circling around your head and the possibility of completely destroying weeks of work in an instant.

It's one thing cleaning castor out of a tethers cars engine and another cleaning mud and grass out of a model airplanes engine.

The thrill of it all.