» Gilbert - a little different form of trash
by Oldenginerod Today at 3:38 am

» Tips: A spring applicable to the needle of our engines.
by NEW222 Yesterday at 6:56 pm

» First time I have ever seen a disconnected connecting rod on the other side of the crank shaft
by rsv1cox Yesterday at 10:17 am

I know in some little parts this has been discussed sorry to rehash. However. I am looking at getting some more Nitro fuel just about ran out me second gallon since April. I have been using 30% nitro. With the suggested 10% castor.

I noticed a good price on some 20% nitro. How much performance loss will occur dropping from 30% to 20% If performance drop is just a little might be a good option?

What performance drop does the experience think? Surely not fully 30% drop as reflected by the nitro right? The original Cox fuel was 20%?

I've never used 30% Nitro, but doubt you would see much difference in performance with a 10% drop in Nitro.

@Iceberg wrote:I know in some little parts this has been discussed sorry to rehash. However. I am looking at getting some more Nitro fuel just about ran out me second gallon since April. I have been using 30% nitro. With the suggested 10% castor.

I noticed a good price on some 20% nitro. How much performance loss will occur dropping from 30% to 20% If performance drop is just a little might be a good option?

What performance drop does the experience think? Surely not fully 30% drop as reflected by the nitro right? The original Cox fuel was 20%?

Iceberg: No wonder none of my engines ever reach some of the figures you guys do like 17K with a Babe Bee. I have never used more than 12 to 15% nitro, (started with 15% and added castor oil and ended up with about 12%).

Old Atari 800 computer games and parts are flying off my shelf like crazy, so I am

Happier than ever Happydad

During the last Tach race that I entered my engines were set up at sea level and ran fine with 25% nitro with added castor oil so it was closer to 20%. Kim had trouble getting my engines to run on 35% nitro if I recall correctly.  It had too much compression for the nitro used.  More nitro, more head gaskets.  less nitro vice versa.  You can run the 20% nitro and tune the engine for peak performance. Try using glow heads with different combustion chamber volumes.  20% nitro at a good price, equals more bang for the buck.  The latest Cox fuel that I purchased had 25% nitro.  I don't know if it is currently available.

Just checked one of my TeeDee 010-s for rpm with 20% then 30% nitro and the higher percentage added about 2k rpm...Reedies may react differently, but the smallest TeeDee-s are really wagging their tails if fed with high nitro...

Ice, if you're using more than one head gasket on your engines which are running well on 30%, try removing just one gasket for starters, which may help to recoup a little of the lost power. Personally, I don't think you'll notice a lot of difference between the 20% & 30%.

A couple of weeks ago, one of the club hotshots came to the field with a PeeWee powered miniature Super Combat Streak.  He was just showing it off because he said he tried and tried to get the .020 to run, but couldn't get it started.  I already knew why, but asked him anyway.  "What fuel are you using?"  He said he was using 10% nitro fuel in it.  The guys at my field all insist on 10% nitro in their 1/2A planes. They're all older than me and have been in the club longer than me, so they don't really listen when I tell them Cox engines will run on 10%, but are only happy with higher nitro.  So I asked the guy if I could try getting his engine started.  He said, "Sure.  If you think you can get it to start, give it your best shot", thinking I wouldn't get anywhere with it.  So, I filled the tank with some 35% Vitamin N, primed it, and it started up on the second flip.  He was amazed.  I then pulled out my pocket knife and cut a handle with 35' lines down to 25' and attached them to his model.  He flew the model and was delighted. Two weeks later and he's still talking about the flight.

Don't get me wrong, these are great guys.  But I just don't understand where they get their 1/2A thinking from.  One that totally made me cringe last week brought a TeeDee .049 powered plane.  I watched him try to start it and told him that it was over-compressed and he should add another head gasket to it, offering one from my field box.  When he flipped it, it did the prop wobble that tells one that the head is over-compressed.  "No, it doesn't need any more gaskets. It's not over-compressed.  It's run before".  So he proceeds to prime it.  His prime method is to pour fuel into the venturi until the fuel overflows.  Then he picked up his electric starter and tried to start the engine.  The engine locked and the propeller promptly spun off.  I wanted to tell him what he was doing was wrong, but knew the advice wouldn't be welcome.  So I watched as he put the propeller back on, dumped more fuel into the venturi until it overflowed, and then took the electric starter to it again.  It eventually started, and he looked at me with triumph.  I just smiled and stood back.

His 1/2A partner was there and asked me what my thoughts were on a Norvel.  When asked for clarification, he asked about how much fuel to use for a run.  I told him that Norvel's got better fuel economy than a Cox, so use less than he would for a Cox .049.  He said, "Okay.  I'll use about an ounce and a half."
????
I didn't give any more advice, as one of the club hotshots was helping him start and launch.  They had a hard time getting the Norvel to start, and when they did the engine was only turning at what sounded like around 14K-15K RPM.  It was flying about like what a stock BabeBee would do, and just managed to not crash on the only loop he tried.  After the flight,he made the comment that the engine was a little lean.
????
I asked what prop he was using and he said it was a 5x3.  I explained that Norvel's don't start getting good power until they hit the 20K mark, and he might want to try a different prop and fuel.  I said I had a couple of APC props he could try.  He just filled up again with his 10% nitro fuel and launched at about the same RPM with the same results.
*SIGH*
I also found out later that he was running with a bladder, so I don't understand why he was getting such an inconsistent run, even if it was over rich.

So, all that is just to say, yes, a Cox will run on 10% nitro.  Yes, Cox used to sell 15% nitro fuel for sport flying.  No, I wouldn't choose that for my flying.  20% is about the minimum I would use if I had a choice.  I buy 25% or 35% fuel as a rule, depending on what is available.  The funny thing is, the guy with the Norvel gave me a quart of Nitro a couple of weeks ago because he had gotten seven quarts from a racing friend of his and he knew I was looking to get some to doctor up some fuel.  If he has pure nitro, why doesn't he doctor up some of his 10% to make his Cox and Norvel engines happier?

So most said that 20% or less was fine. One or two said stay higher and add extra head gasket.

If I get a deal on 20% and add the 10% Castor making it 18% seems the majority feel that might be fine with a single head gasket?

I am soon to buy either the 20% or 33% nitro. I'll see if any other opinions sway my thinking.

Thanks very much excellent comments by all. 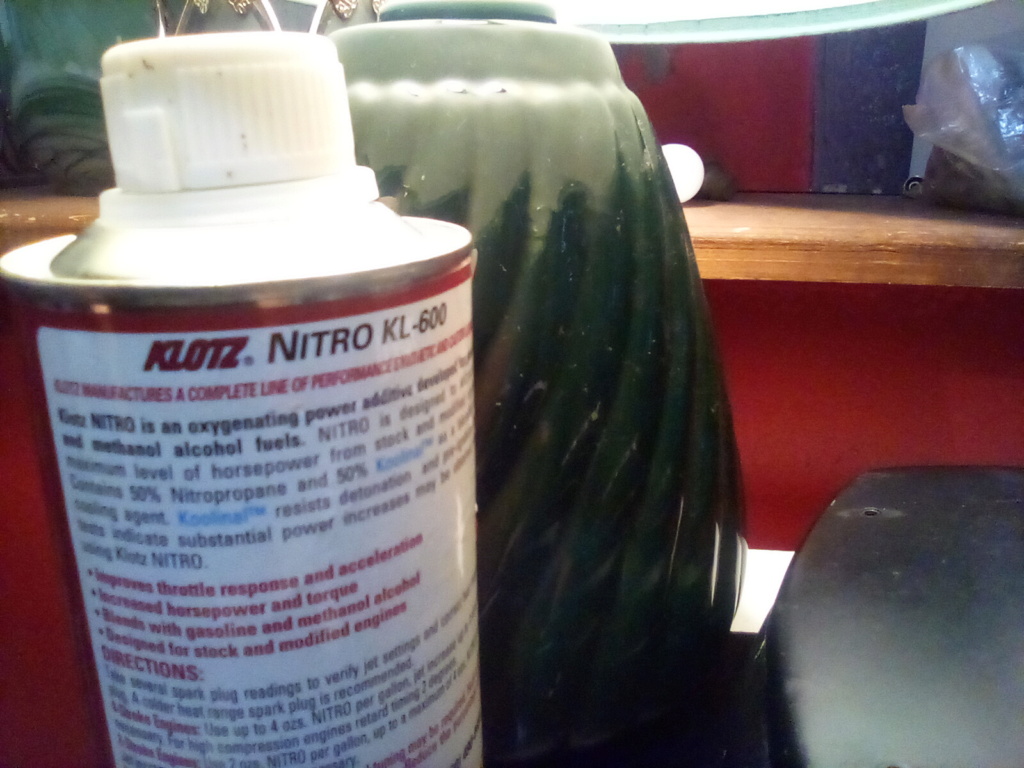 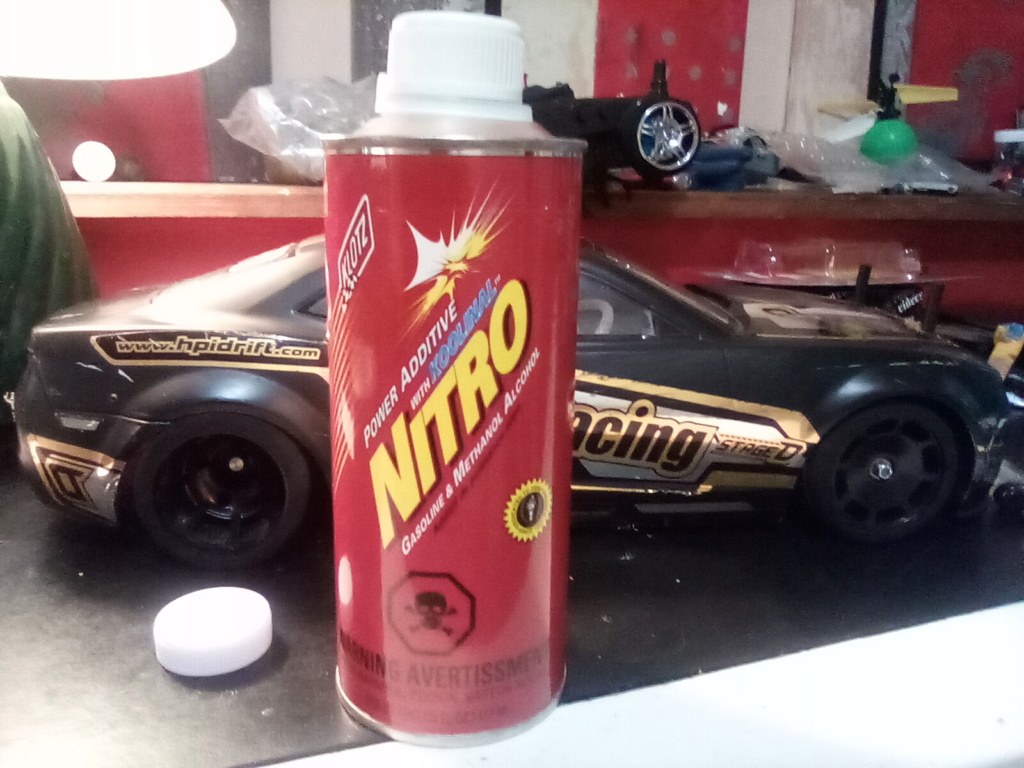 Well, I can't find an explanation for exactly what Koolinol is, but that Kl-600 "Nitro" is 50% Koolinol and 50% Nitropropane.  I have previously read that nitropropane is a no-go for model engines, so I don't see that I'd try this product.  But if someone else tries it, I'd be interested in the results.  It's even cheaper if you buy it from WalMart:

I've been using castor oil from the pharmacy. After a few hundred tank fills haven't noticed any problem yet?
Ice

@balogh wrote:Just checked one of my  TeeDee 010-s for rpm with 20% then 30% nitro and the higher percentage added about 2k rpm...Reedies may react differently, but the smallest TeeDee-s are really wagging their tails if fed with high nitro...

Andras your red postage stamp motor that was truly screaming was lower nitro though right? 25% maybe?
Thanks
Iceberg