Here is the needle valve assembly I bought off eBay.

Jason, I only clip the needle valve if the engine is mounted profile. When I do this, I solder a knurled knob onto the shaft after I cut it down. This is a pain in the rear because they blue the needle which needs to be removed if soldered. Having a Super Tiger needle in the Fox takes away some power that the engine really needs. It chokes the throat area of the venturi down. Turning down a Super Tiger needle valve usually breaks due to it being too thing to begin with. I just file a flat on one side of it. Some people have opened up the venturi to accommodate the larger spray bar. I believe a Fox is around .127" and the Tiger is .156" that's a considerable difference. The trade off however is that the Tiger needle offers very reliable and good adjustment. The stock Fox is crude but can be made to work, just not at the level of the Tiger.

As far as plugs, you can use any standard length hot plug for bench running. The hottest plug you can use which is a Thunderbolt r/c long. A Fox plug works if your bench running it but not one I would recommend flying with especially if you plan on stunting it. If you have the engine running and you remove the battery and you hear the rpm's drop audibly, your plug isn't hot enough. K&B 1L, Thunderbolt rc long, Mccoy MC-59, Fox standard long or rc long, Enya #3, I don't care for Fireballs due to many issues I've experienced from poor threads to leaking posts, OS A3 to name a few.


As far as fuel, you don't need high castor fuel even in the old engine. I run 22% oil 50/50 in all my Fox's. I own about 30 Fox .35's and they've been running on that blend for 25 or more years. The issue here is that Fox changed the wrist pin on the later Fox's. Your Fox might have the brass end pads which are extremely susceptible to wearing out and cutting grooves into the cylinder. I would just keep your oil content at 25% all castor which is more than enough protection.  Your suggestion of 50% castor is WAAAAAAAAAAAY too much oil and in fact it probably would just shut off with that syrup.

Sorry about the oil confusion. I meant 20% oil with 50% castor and the other 50% being synthetic. I updated my post.

I'm sure this one has brass pads but haven't taken it apart to check yet.

I can file flats on each side of the NVA to open up a bit. I bought 2 of the ST NVAs so if I mess one up i have a spare.

Personally, I wouldn't take it apart as it can do more harm than good. The case is like a eggshell. The cases are not square nor is the cylinder liner. If you tighten one screw on the head incorrectly, it can distort the case which distorts the piston liner. The liner isn't indexed so providing a witness mark is a must as well. 20% oil is the bare bones minimum I would run the Fox on. Dukes fuel was that percentage all castor. Dukes Superfuel was 28% which really fouls things up but many insisted on using it. One thing that's important is that the backplate doesn't leak. They used cork gasketing on some of these and that can really squeeze out. If the small screw tabs on the backplate are slightly bent, don't try and straighten them as they will break instantly. 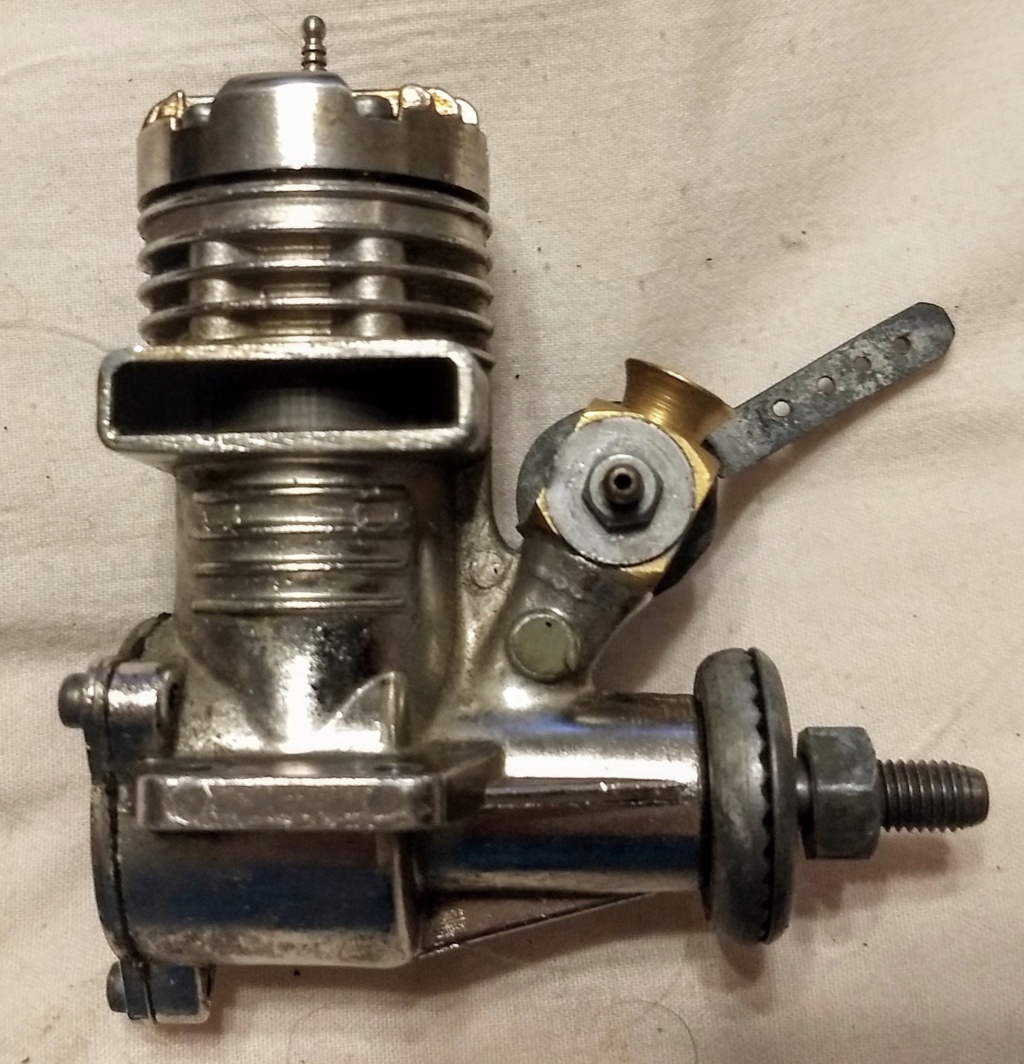 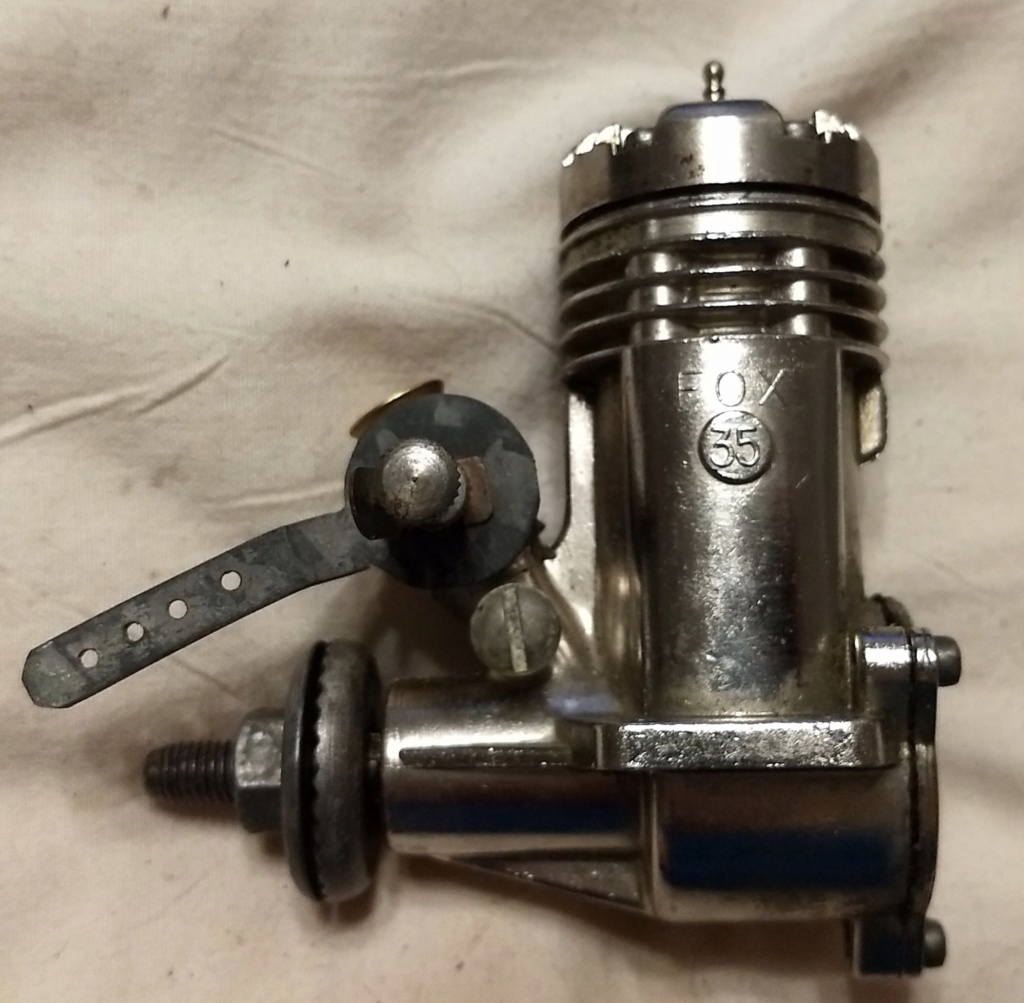 Jason, from what I see you have a rare version there. Aside from that carb setup, the "63" version is the 15th anniversary gold edition. The gold plating was not very bright in terms of yellowish gold. It was a plating and it's extremely prone to peeling off especially around the mounts. However, this one looks great. In addition, the fits were quite good on this version. It appears to be in great shape. A terrific example, treat it well.

I have yet to find a true value on this version. I only have $15 in it as i got it in a group lot of engines a while back. The NVA I just bought costs more. Trust me this engine will be used for something special.

You probably won't find a value on it. Control line in particular doesn't command what are high dollar prices. Yes, Ebay does a great job of inflating values making everyone feel they have fortunes sitting around. Those that would've used these engines are essentially past they're flying days leaving the next generation of flyers. The control line hobby was based on money in mind and there wasn't a lot of it. Duke set a goal to produce a engine that the average person could afford and he accomplished that task. I poke fun at Fox's but in truth, I love them. A collector wants new or unrun and generally the box as well. Having one in that condition would indeed raise the value considerably. I would just appreciate it for what it is. Mine sits on my shelf and I pick it up now and then for a flip or two.

The ST NVA arrived today. Is it best to file some of the diameter off from each side to reduce the restriction in the venturi? Once installed I'll give it a test run at the farm as I'm sure this thing will bark with the open exhaust.

It will run without any filing. However as Ken mentioned peak performance is achieved if the air Flow volume is kept the same as the original needle. I would file some off of both sides. It’s going to be a tricky affair as it’s not very thick to start with.  Hole pointed downward in final config.

It runs! Man this thing barks!

I don’t know what these generally pull. Might need to file more from the NVA to open it up. 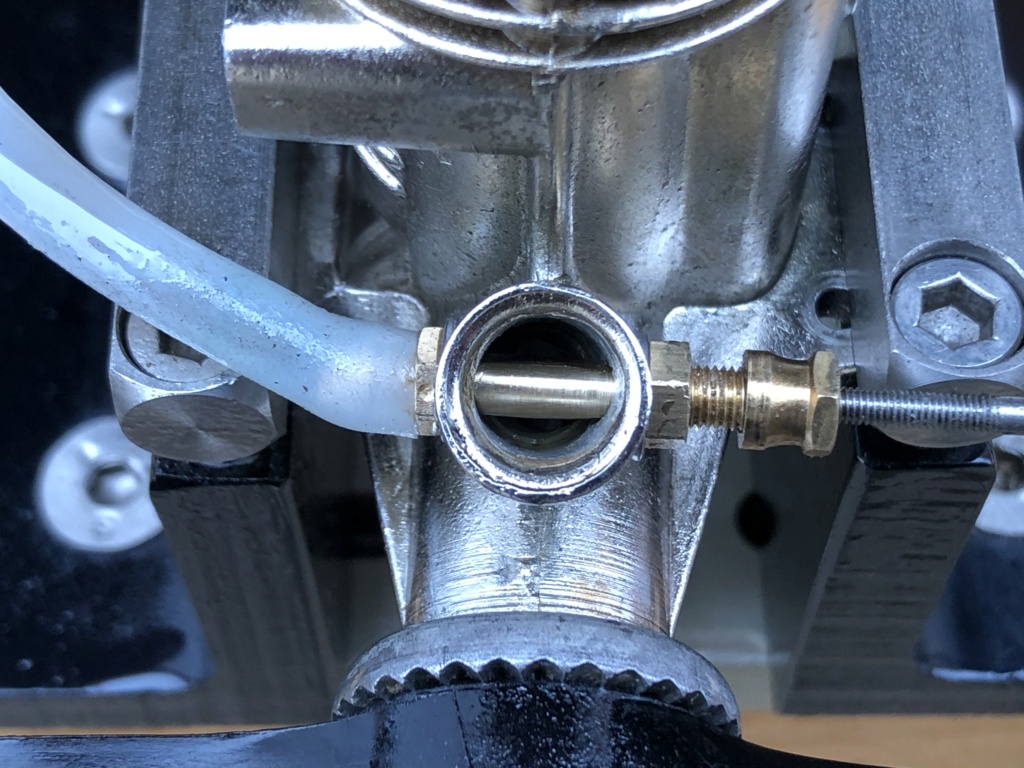 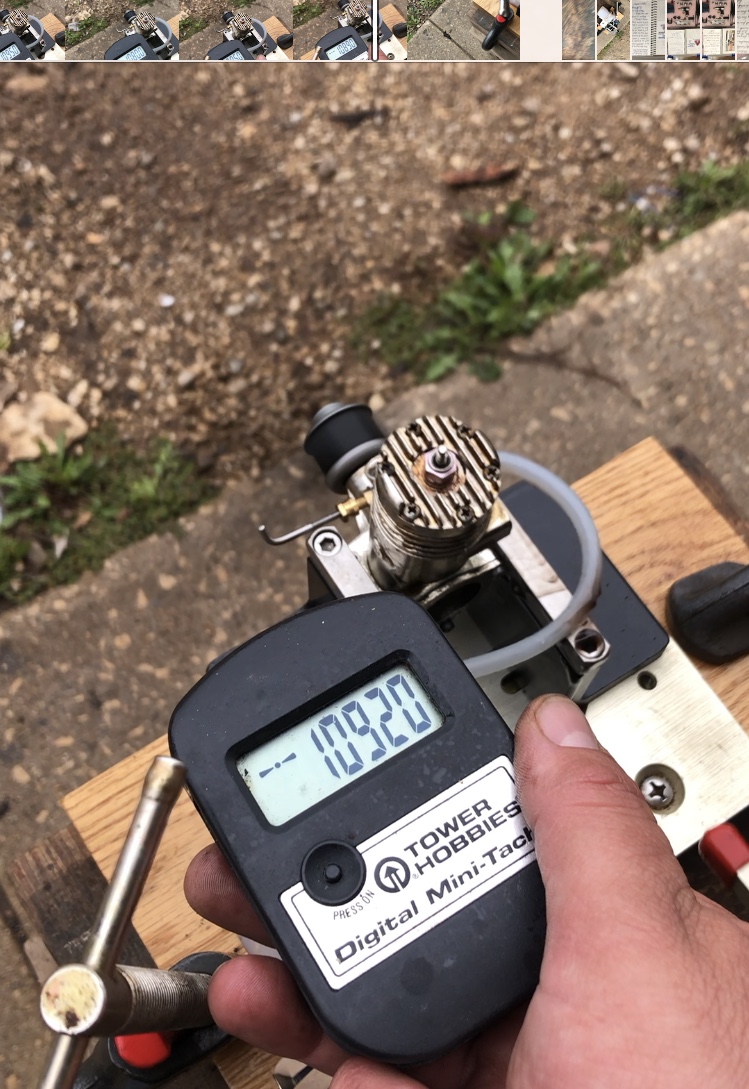 You really want to keep your nitro below 15% ( This is good advice) if you want to keep the crankshaft from coming out. They're quite crude and can break across the cutout. Generally, if your getting a little over 12K on a 9x6 prop you have a strong runner.

Serious Nitro though. It won’t last at that percentage. Listen to Ken. 5-10% is what we  use in the field. What you re-created was a 1960’s combat run. Still very cool!

They do bark, big difference from a Cox. It’s all torque

Ok. I’ll call it good before I grenade it.

Jason, I meant to inquire earlier on. Why don't I see the through hole in the case for the needle valve on the side view pic of the exhaust side of the engine? I noted the other side had a screw. Nonetheless, it looks great and they really are cool engines.

JB weld in the hole I had to clean out. Someone glued the carb into the venturi.

Needle shortened. Required acid flux to get the knurled end soldered on. Hopefully not too short but too long would cause a problem with vibration with the added weight on the end. 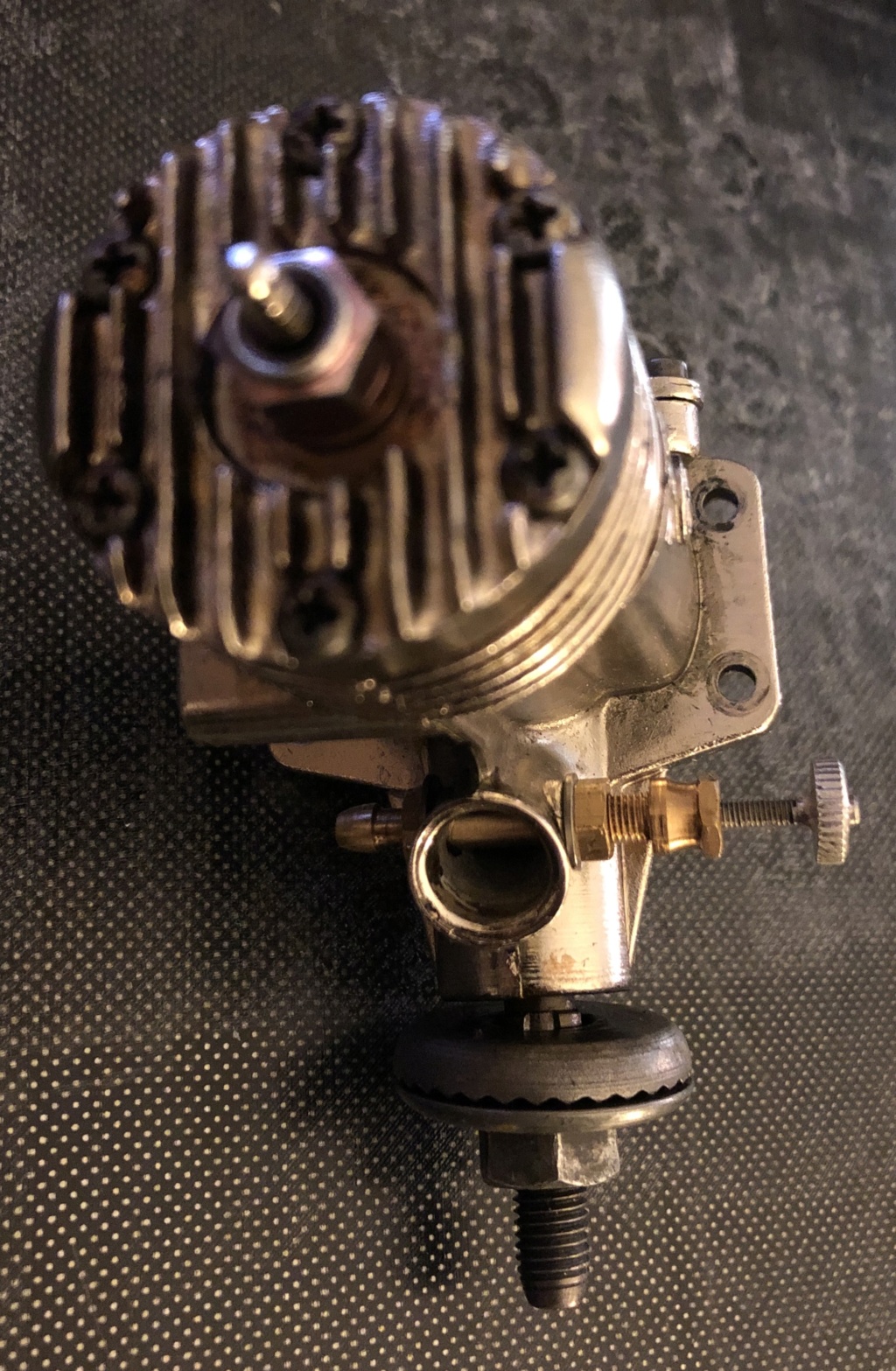 Generally with ST NV’s they just get cut down and the end gets bent on a 90 degree angle.

What I like about Tigre needles is they get set once and only need minor tweaks one way or another to compensate fo temps/nitro content etc. to maintain the same engine run.

I also have a Fox .35 (condition like new). I took some high-nitro fuel and cut it with straight methanol to get 5% nitro fuel. It would be good to compare notes as we both work toward getting these engines ready for flight.

I used Andy's two-fuel blend Excel spreadsheet to establish how much of each fuel and how much castor oil to make the appropriate blend.

The engine ran fine...well, as well as expected as I learn about big engines and their required break-in. Now it runs quite well, so I hope to hand it in an airframe and go fly BIG.