I used this website to do the calculations because it's late and I don't have any scratch paper to hand:

I guess my question is why do you have all those different FUELS?

Good you can save them for use with the Coxes though.

Mark
I am NOT buying the 1:99 Heli mix....I have seen some Car racing blends a low as 11% lube most of the time all synth

When I am in our only local Hobby shop (RC Car oriented with a race track complex in the back yard) I usually can find RC car fuels with high nitro but low oil for what I consider cheap, at under $20 per gallon

I got two gallons a while back for $17 each...25% N and 14% lube and no idea the lube synth/castor amount so just assume it is all synth

getback wrote:I guess my question is why do you have all those different FUELS?

Good you can save them for use with the Coxes though.

I bought the gallon of 4-stroke to run in my Saitos before I bit the bullet and bought YS-Saito 20/20 fuel by Powermaster. The heli fuel I bought for a heli that I never got around to flying. The Traxxas stuff I bought because it's the only thing the local shop carries.

The Excel spreadsheet is built for quarts. I edited my local copy for 8 ounce total blend. Play the numbers for two different pairs (fuels A/B and fuels C/D of fuels, then grind those two resultants to get your final blend.

For me, I use hi nitro/low synth oil heli fuel, lower-nitro mid-castor content truggie fuel, and a shot of castor. My final has about 22% nitro, and 20% 50/50 synth/castor. The engines make good power, don't overheat, and splatter the model with a light layer of castor/exhaust mess (easily cleaned up).

I'm glad that spreadsheet was of some use for you.  I wrote that over 15 years ago simply because I got tired of doing the calculations by hand.  At the time I was mixing Sidewinder 20/10 and Sidewinder 30/10 with BeNol to get the blend I wanted.  I also have an Excel calculator for one mix that is a little easier to use.  Later I wrote a Windows application that uses a slider to allow selecting the desired castor percentage after entering the original fuel mixture.  It allows the user to drag the slider with their mouse and spontaneously recalculates the values.  Unfortunately, all I have is the executable which my email provider will block.  The original code was on my office computer, but I guess I failed to migrate it when I retired.

I am attaching a screen shot of the Windows product -- it worked well. 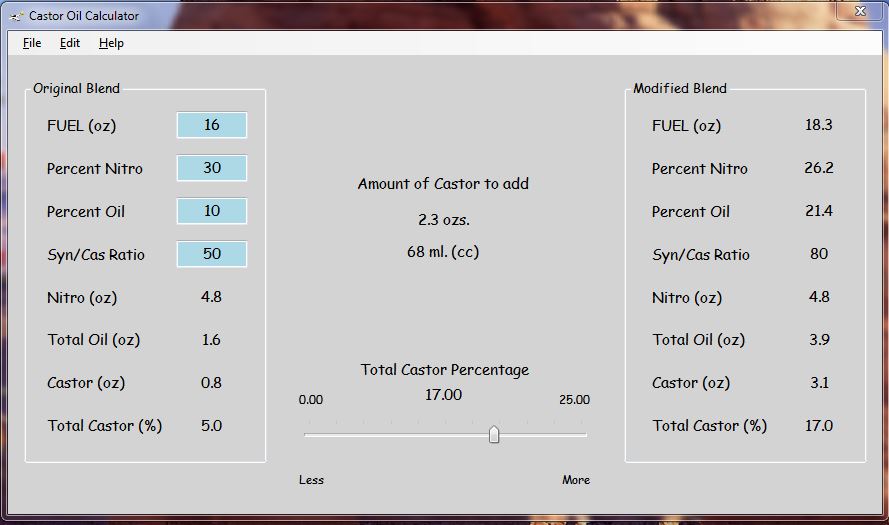 Andrew,
Any time someone wants to blend two fuels, I point them to your Excel spreadsheet. I've been doing that here, on RCG, and StuntHanger for at least four years. Or for almost as long as my comeback to the hobby.

I appreciate the Excel one specifically because it does the math for a two-fuel blend. I appreciate the ability to input two fuels with known nitro and oil content, and computing/outputting the combined values. In my case, I get high N/Low C fuel, and straight methanol to reduce the nitro/increase the castor for my needs.

You have advertised your newer GUI-version the last few times I mention your "old tool,"  but your screenshot looks like it is for doctoring-up the castor content of one fuel.

I hope the new one can do two fuels. I guess I need to try the new tool.

Thanks for sharing your tools.

Similar topics
» Holy Cow!!!
» Holy Cow! That was fast!
» Sig Akromaster build.
» Holy Cow! He dropped the price!
» 'Holy Shorts Sherpa Batman!' The plane I would want if I ever went Large Scale