Log in
Search
Latest topics
» Wanted : Anybody got a "Sleek Streek"?
by fredvon4 Today at 19:54

» Parody of an Already Crazy "I Crashed My Plane" Video
by Kim Today at 14:10

My last effort to build an airworthy biplane for my 010-s did not bear fruit. The small biplane has too short wings, or a slight twist that I cannot find with my eyesight, but the biplane has been unable to stay airborne and I put it aside.

A few years ago I bought an 020 Sharkface  kit that was sitting on the shelf waiting for its time to come. I think Troy aka Tee Bee has posted a topic on his similar plane.

This is roughly what comes in the kit, wing and fuse pre-assembled:

I started building it to finally have another decently flying plane  - on top of my Littlest Stick and  Roaring 20 - with either the designated 020, or,  the 010-s in its nose- also in hopes that the Worlds Smallest Traveling Engine will once show up in my doorway and I can put it in its nose.

The kit comes with only the basic balsa parts and I had to make it a bit more versatile than just an exclusively 020 air-frame.

I have  added a plywood firewall with blind nuts for both engine mounting dimensions. I drilled 2 openings for the filler hose and fuel line through the mount. 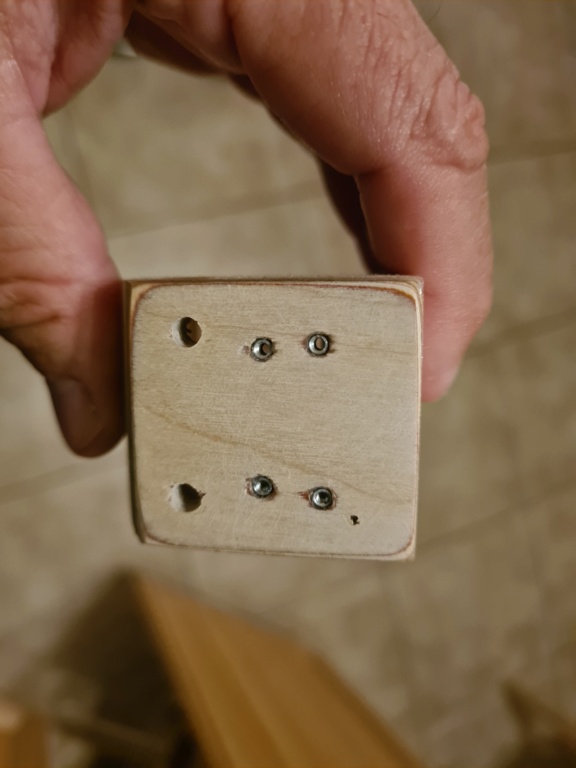 The balsa leading edge was reinforced with a 3mm carbon strip to better withstand heavy landings on high grass and weed in the field where I fly. 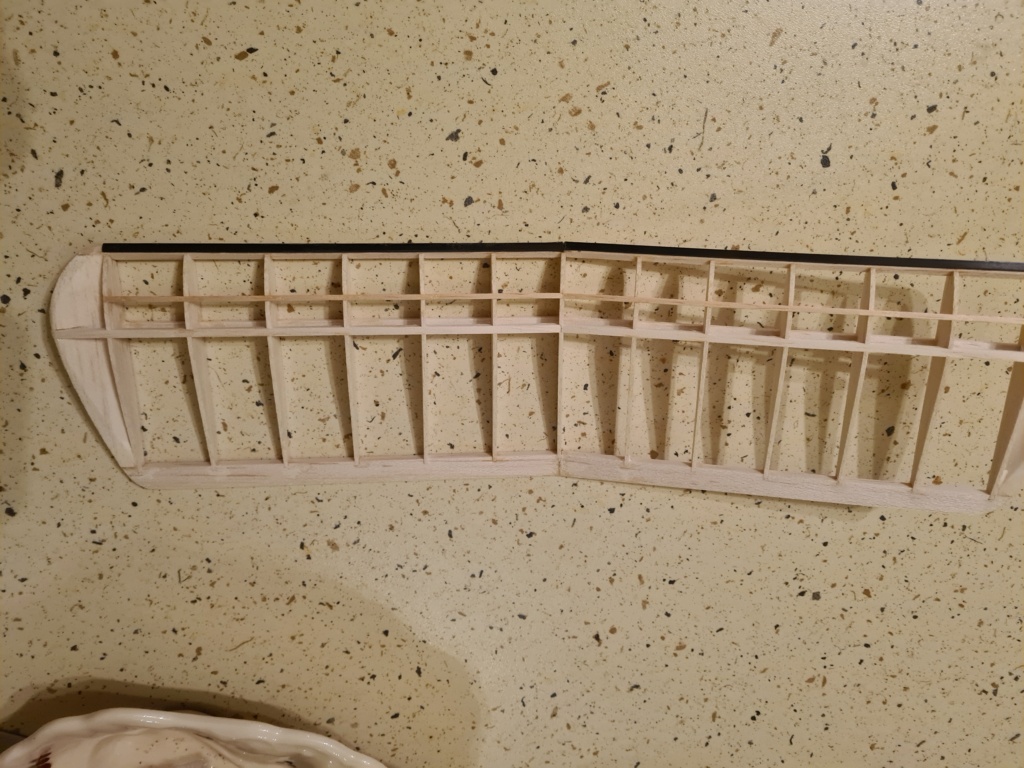 I will proof the engine area with polyurethane spray. Will probably select some light, transparent Oracover...color is yet to be decided.

In expect it to weigh around 150-160 grams with battery, RX, servos, engine, tank, switch and accessories all added.

I am not in a hurry, but try to finish the plane before rainy season comes. Will add further details later.

Hi András, thanks for sharing your project, it looks great ... congratulations! I will follow your progress.
As for the biplane that you are commenting on, I think it should be a tune-up, I would like to collaborate with that project, so if you resume with the biplane, perhaps, we can evaluate some points together.
Again, it's a pleasure to see your work, I certainly know how much you love and value everything about Cox.
Side note, I'm drawing a model, for Cox .049 ... I've already christened it, it's called Cox Fun ... I'll post something soon ...

Very Handsome little model. I like how it’s shaping up. Great work Balogh!

Mauricio, Ron, thank you for your kind and encouraging words. I will keep the developments posted.

Mauricio the small biplane "buzz-bipe" I built some time ago flies like an axe with no handle..as if no engine were in its nose.. 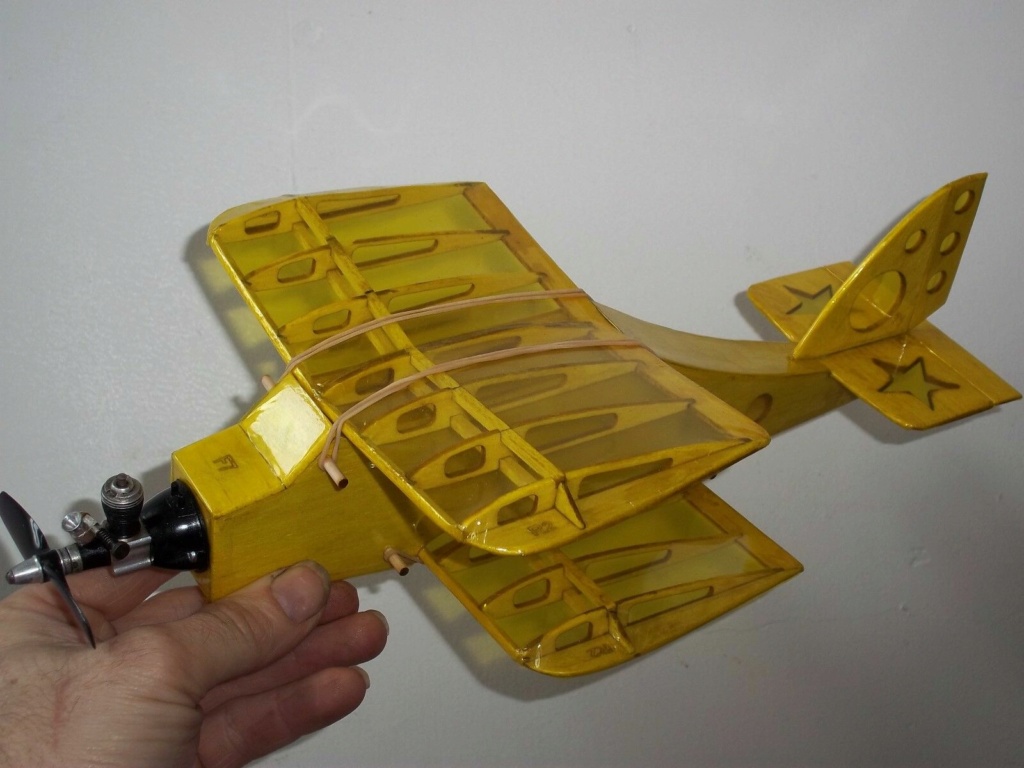 I hand launch it and it veers off in any direction it wants then pulls into the ground. Serious stability issues, probably inherent to the design with short wing span, too much dihedral and highly positioned CG. I tried it even with the battery fixed outside under its belly but it tends to capsize in the air.

For fears of damaging my TeeDee010 I gave up on that lil buzz-tard.

Almost done. The tsil section needs to be mounted and control surfaces set.
With the missing RX and balloon tank added I expect the all up weight near 160 grams. 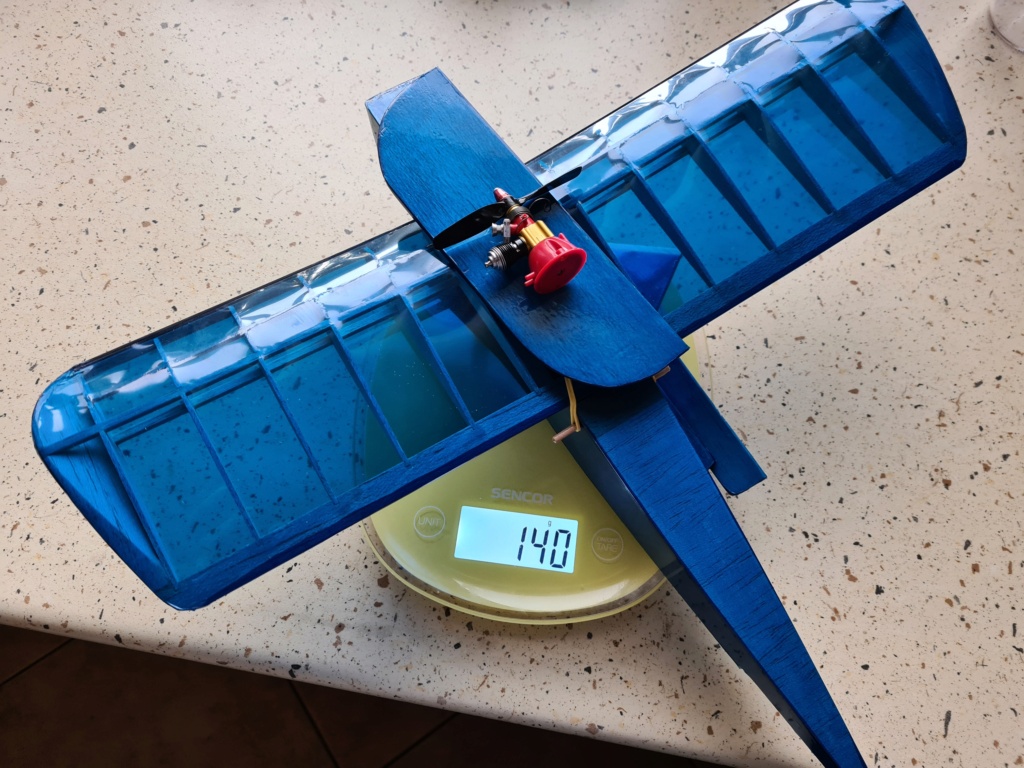 @balogh wrote:Mauricio, Ron, thank you for your kind and encouraging words. I will keep the developments posted.

Mauricio the small biplane "buzz-bipe" I built some time ago flies like an axe with no handle..as if no engine were in its nose..

I hand launch it and it veers off in any direction it wants then pulls into the ground. Serious stability issues, probably inherent to the design with short wing span, too much dihedral and highly positioned CG. I tried it even with the battery fixed outside under its belly but it tends to capsize in the air.

For fears of damaging my TeeDee010 I gave up on that lil buzz-tard.

Hi András, can you please put a picture of your model plane on the side ?? like the drawing that I leave ...
I want to see something, thanks...

I especially like the idea of the carbon strip along the wing leading edge.
Please may I borrow the idea?

I am very interested to see what RC kit you use!
I have zero knowledge of modern RC components and thus I have no idea what to use myself on the PC-6.
I have seen these Spektrum AR6335 6 Channel AS3X Nanolite Receivers and Spektrum's micro linear servos. What do you think. Rotary or linear servos. 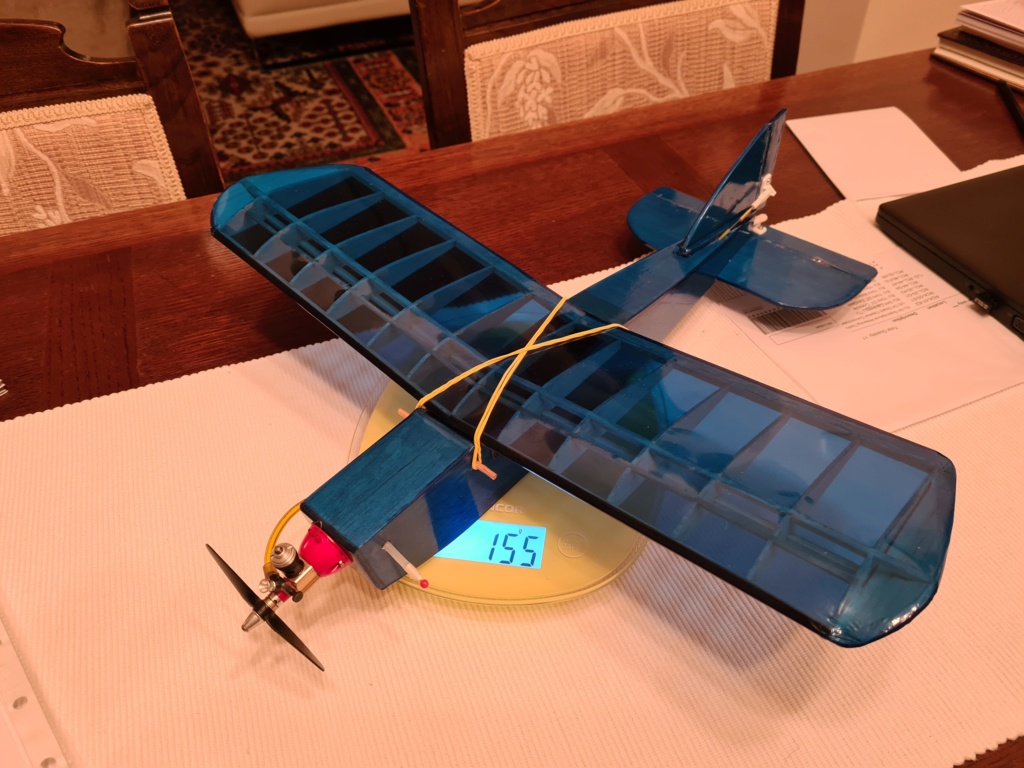 I will maiden it tomorrow. Sorry for not having shared the build stages but given it is sold as a halfway assembled kit, there was not to much thrill around building it. Like always I shed blood sweat and tears mainly when completing the control surfaces with horns, pushrods and the improvised servo tray.

Regarding RC gear I prefer the 2.4 Ghz Futaba RX,  and micro or even nano servos powered by a 400mAh Nimh battery..Light stuff  that helps keep the  all up weight down. 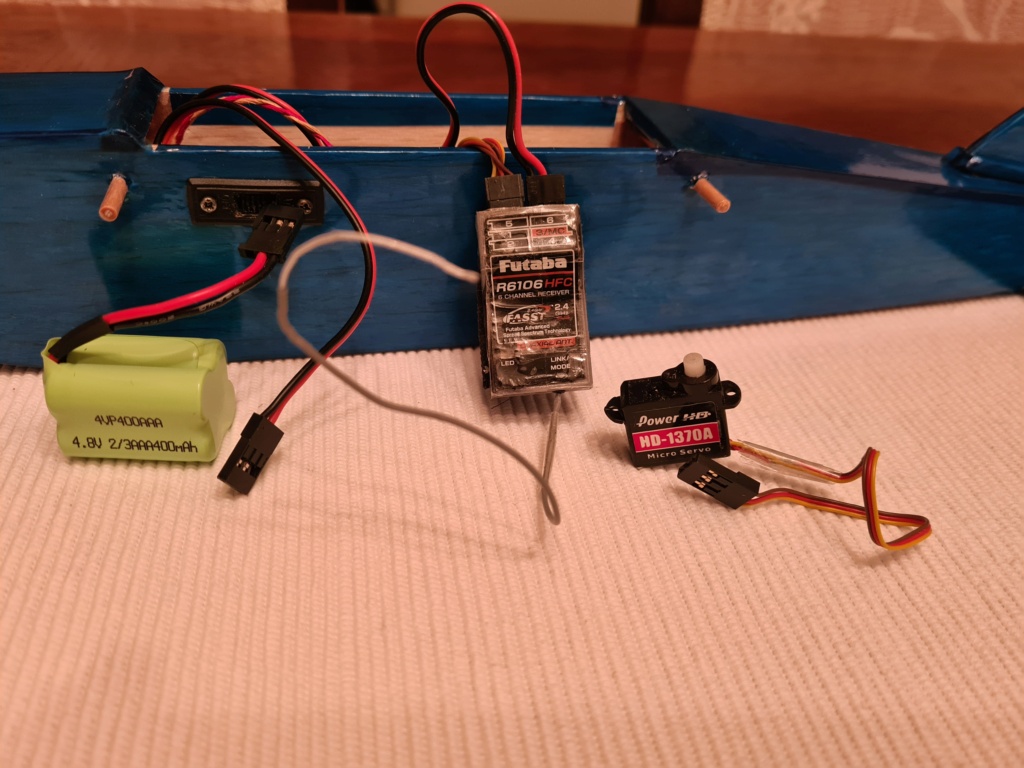 I am not an electronics expert but I think these are rotary servos because the arm rotates rather than traveling in longitudinal direction. Analogue servos because digital are way more expensive and my flight skills do not really justify the refined kinetics of digital stuff.

Thanks Andras I shall use your advice to sort my PC-6.

Looking forward to your report on the maiden flight.

Hi András, can you please put a picture of your model plane on the side ?? like the drawing that I leave ...
I want to see something, thanks... 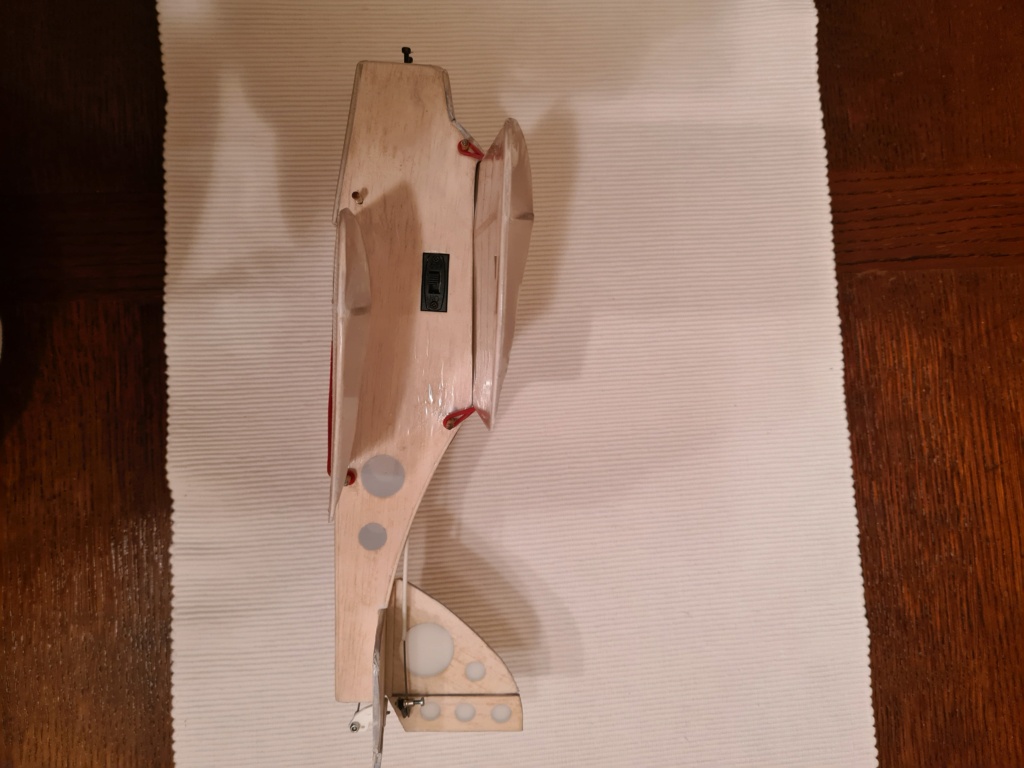 Thanks András, Yes! I was referring to that model.

Before taking some guesses, tell me, have you seen any flight videos of this model? with the same engine? I mean a video of another colleague, who can see it in action? Thank you!

Thanks Mauricio..I searched the net but have not found any video. Various RC forum posts pop up if you enter Buzz bipe..mainly about the building..I am doubtful if the Buzz bipe design is airworthy at all..the seller is a CEF member called MiniatureAircraftFactory.. I think the Buzz bipe wingspan is too short and the center of gravity sits too high..I checked if the built up wings have any twist along their spars but found everything OK. Still the Buzz bipe cannot fly.

I hope to have more luck with the Sharkface .

András, I have measured and calculated the model and in general I understand that this design does not meet some necessary measures for good performance.
A: the nose moment is very short.
B and C: tail moment, it is very short.
D: this sector acts as a screen and the rudder is obsolete, it is ineffective.
E: upper part of the rudder, only free surface to generate the direction, but it is very small, therefore it is not effective.
The wingspan of the model is very small, it should at least be no less than 11 inches (each wing) and therefore the fuselage be longer.
That is why I was wondering if there is a flight video of that model, as it is presented.
Here I share an excellent design by Ken Willard, as if to have a reference of moments.
Although Ken's model is for .020 it can be calculated for .010 and they will obtain a very different result than the one presented by the Buzz bipe. 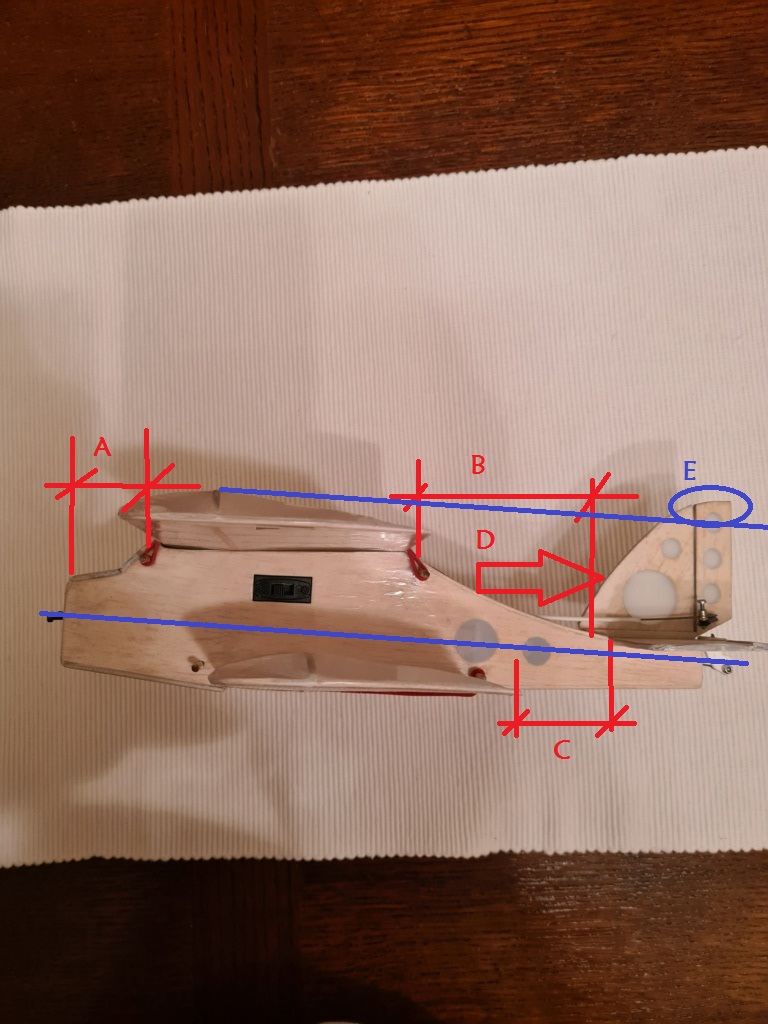 Thank you very much for your analysis Mauricio

Even if it does not make it fly, at least relieves me by verifying that it is not my poor build but the inherent design shortage why it does not fly.

You're welcome András, I think that you should not rethink questions about your own assembly, but rather, questions about the design of that model airplane.
If the manufacturer of this model participates in CEF, perhaps he can give us a contribution about this model, and even some flight video of his own creation. It's funny, maybe there is something new that I don't know ...

Thank you Eric, just opened another thread with the maiden video...