I missed this. Good one Mark. Greenie for ya!

Sorry for the brain lapse.
Rusty's Memorial Engines were sent off to don Roberto-rsv1cox
this past Thursday(9/9/21).
No photos. All I did was inspect(ogle) them a few times,
read the log a few times, and hold onto them too long. Sorry.
I did add a Valentine spinner to the .020, and put the stock one
in the spares section of the engine case.
Thanks Jason and Jacob, for putting this well deserved tribute together.
Miss him,
Bob

Just got it today Bob. Struggled to save the carton, think I did. Wonderful packing and presentation!

I won't keep it long, just read the log maybe remove the RR-1, mount it on something and flip it a few times. I would not dare to fly it. Pleasant thoughts of Rusty and the rest of the crew here on this forum then on to Rene. 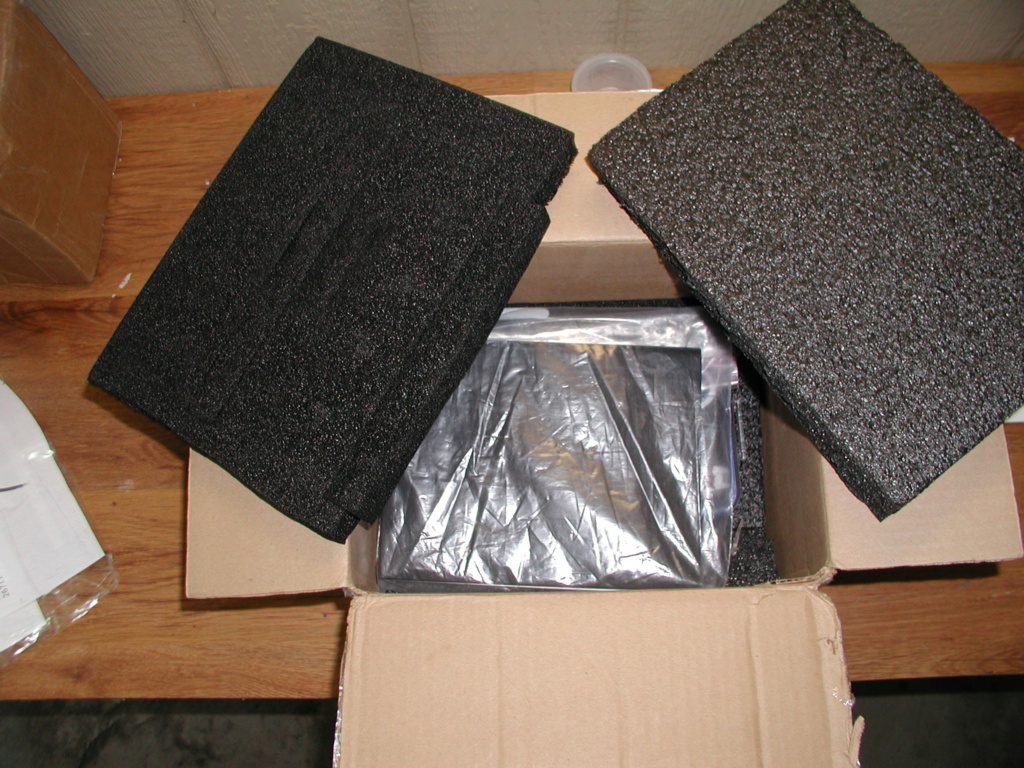 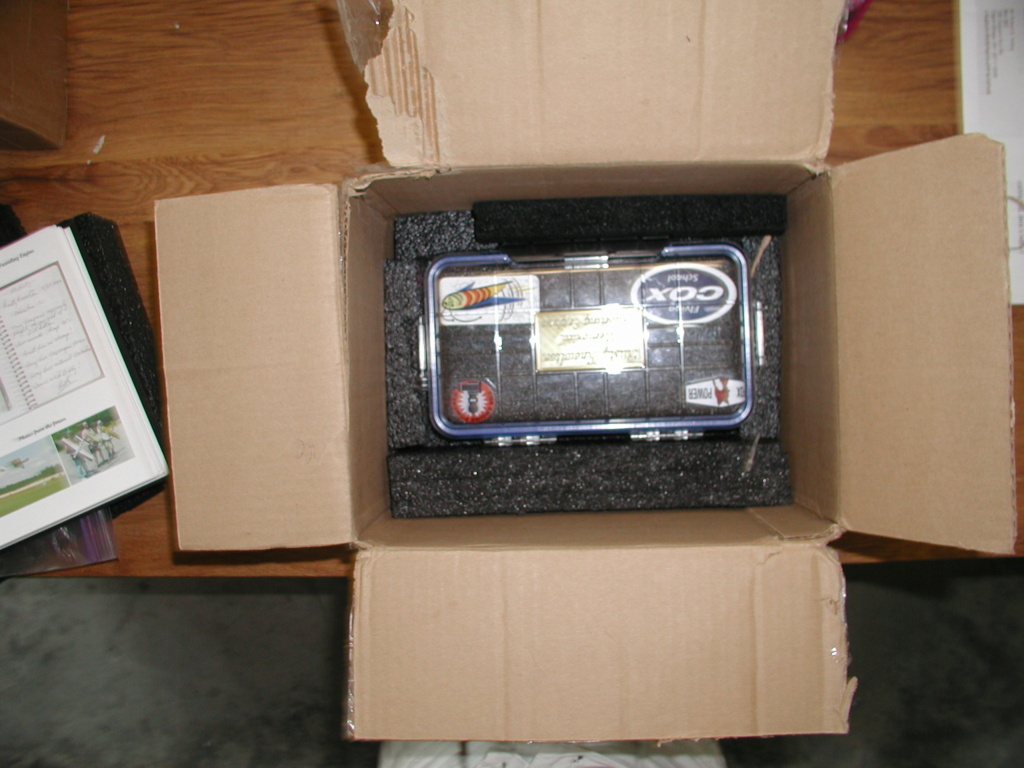 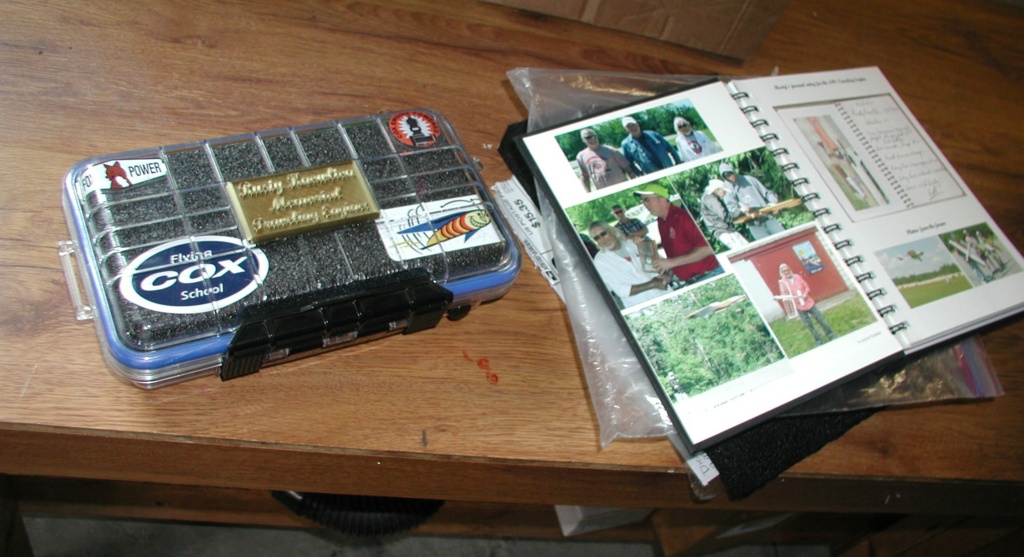 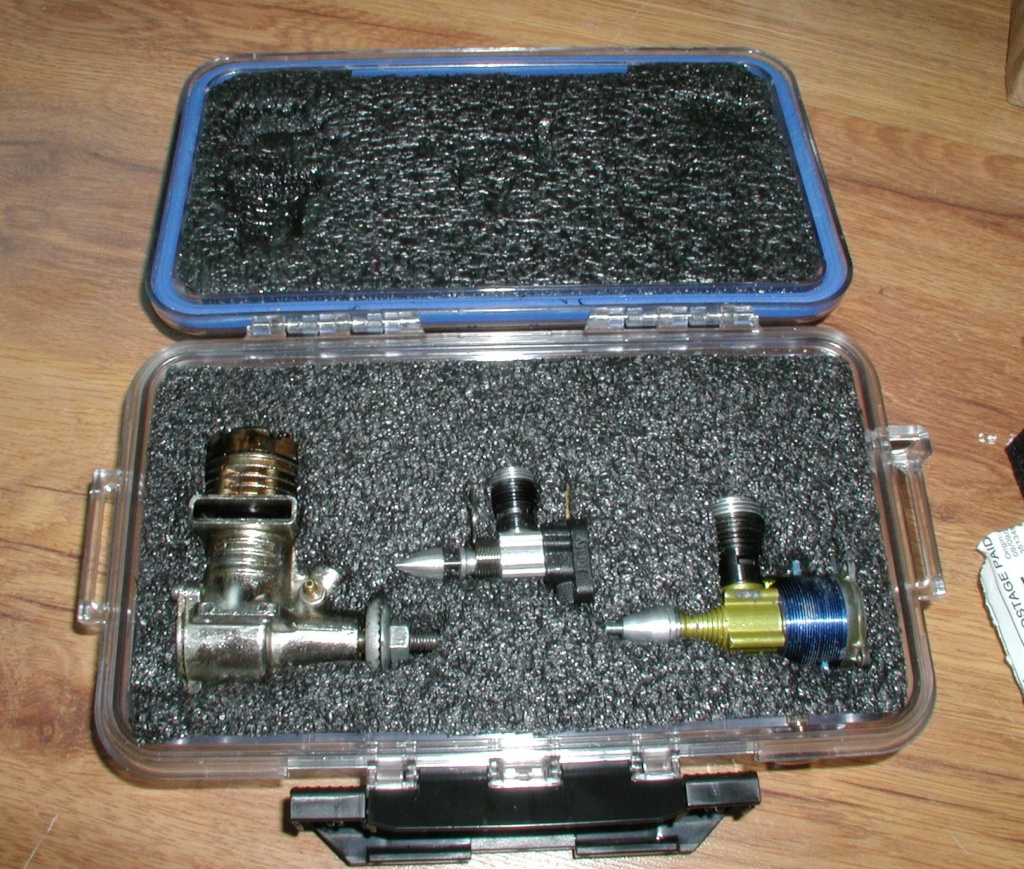 Ha! The Fox is getting dirty…cool!

Bob, they were meant to be used. Run one up! You won’t hurt them. They have all been flown at this point. Give er a bench run for ‘ol Rusty.

Bob, they were meant to be used. Run one up! You won’t hurt them. They have all been flown at this point. Give er a bench run for ‘ol Rusty.

I might Ron, maybe prime and flip it.  Save a disassemble and fuel tank clean.  One less cycle.

I could not make my mind up as to what plane to put it on.  In the end there was no question.  I first flew this Baby Ringmaster when Rusty was just a pup.  I turn 84 in about three weeks and I've been at this since my pre-teens.  I think that Rusty would approve. 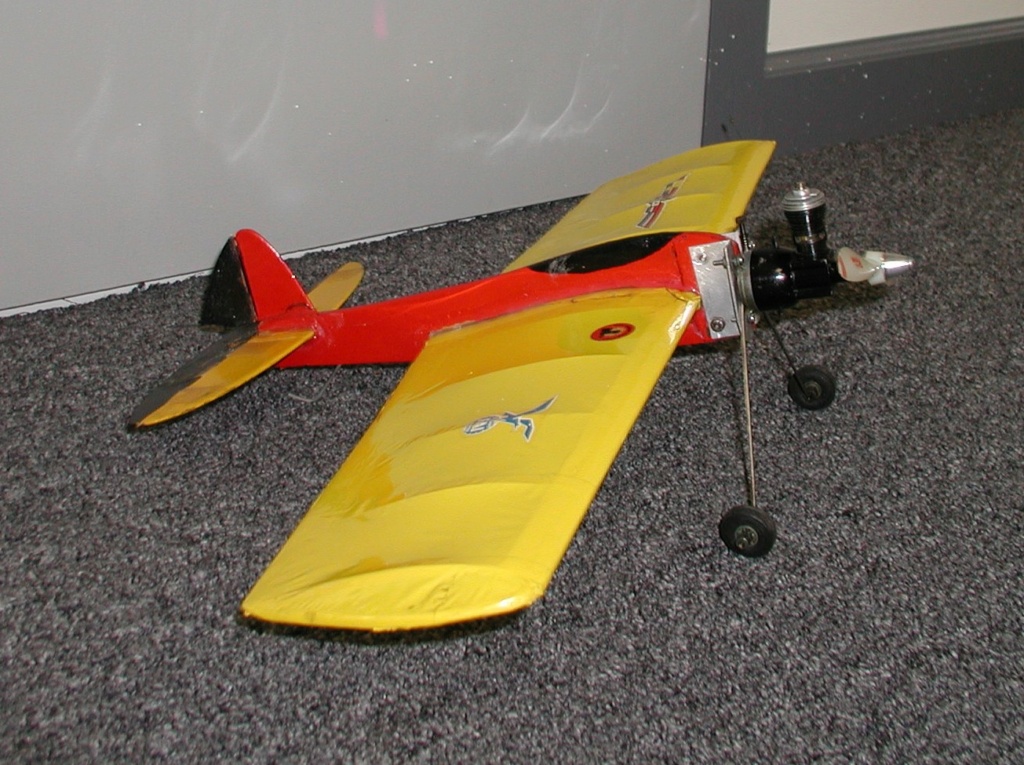 The first non-hollow log plane that I built, and ya Ron as you let me know I got the tail wrong.

Flown and crashed many times it somehow survived.  It may be the first plane that my son flew also.  Many years later, he flew it again in Colorado pictures of which I have posted here.

Tomorrow will be Rusty's day. 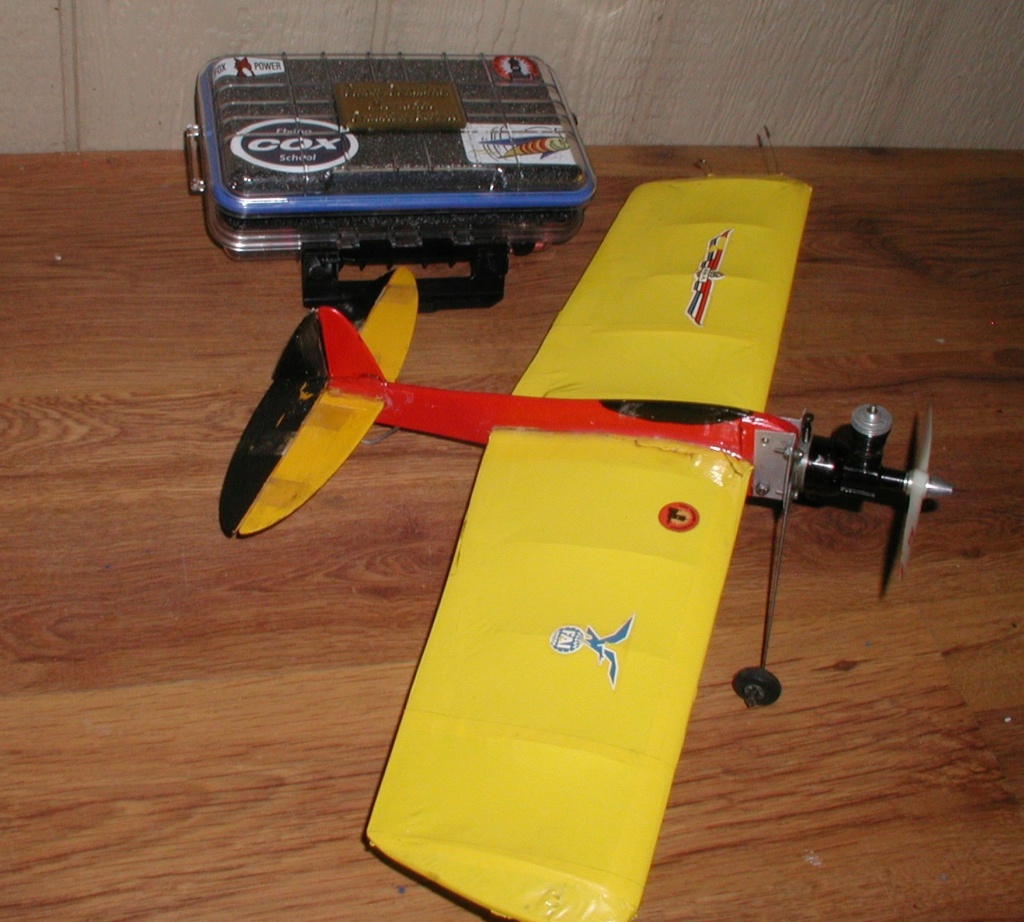 Second thought's.  I tell you, were I much younger and more adventurous I would mount those two 049's on my P-38 (RR-1 on the inside of course) and fly the wings off it.  Would have to tank up the other one though. The Baby Ring predates the P-38 by a whole lot.

Looking good. Gotta love the castor stains on the Fox. I want that thing to come back looking almost black from running.

I agree with Ron. Run one in memory of Rusty.

This will be just a shadow of those, but I feel pretty good about being a part of this.  Looking at the RR-1 and knowing that it has flown over Kim's residence, been on Ron's and Mark's planes doing circles and has been in Jason's, Jacobs, and Bob's hands is rather humbling.

I mounted the RR-1 on the Baby Ringmaster this morning.  I set aside the old mixture of 2/56's and used new ones instead.  Used round shanked screwdrivers to avoid marking up the RR-1's fuel tank.  Rounded up a nice vintage Top Flight wood 6/3 and installed it. 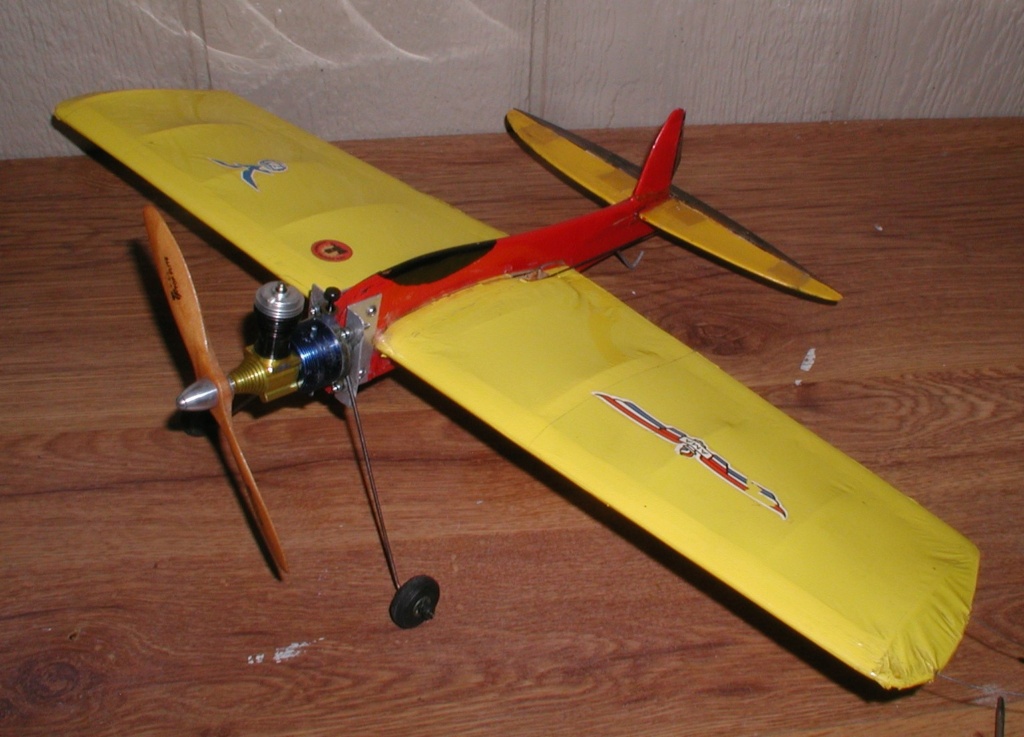 The Black Widow won't go back on, instead a thin wall tapered case period correct Babe Bee will substitute.  I used to buy these in 1956 for about $3.95 each. 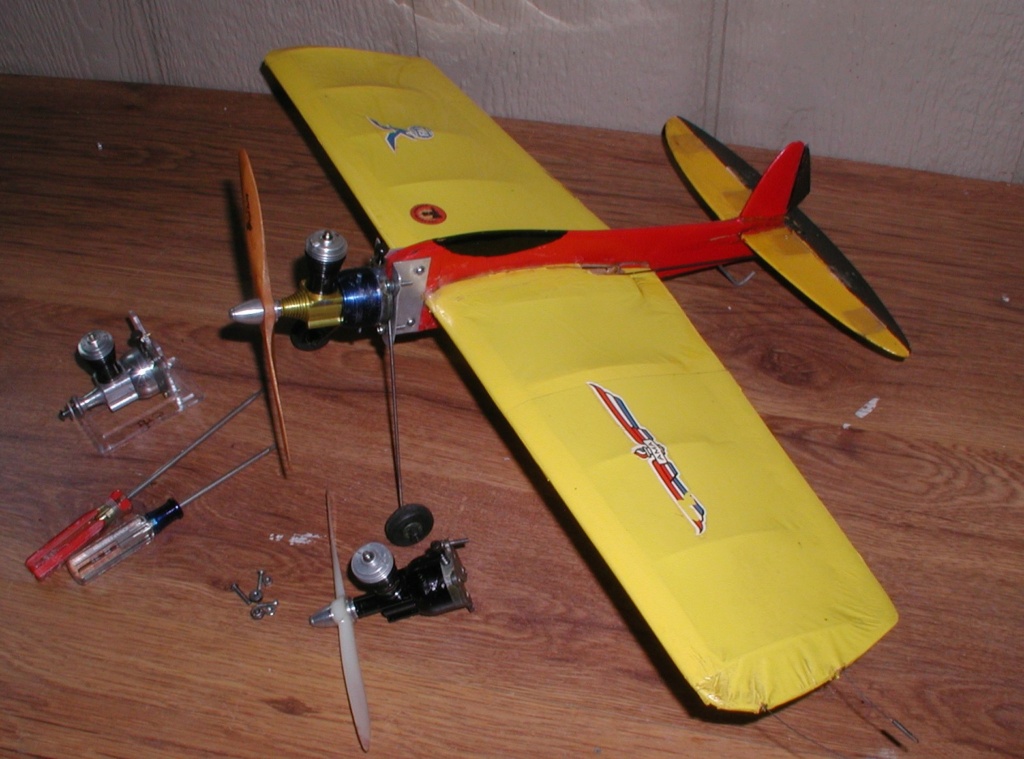 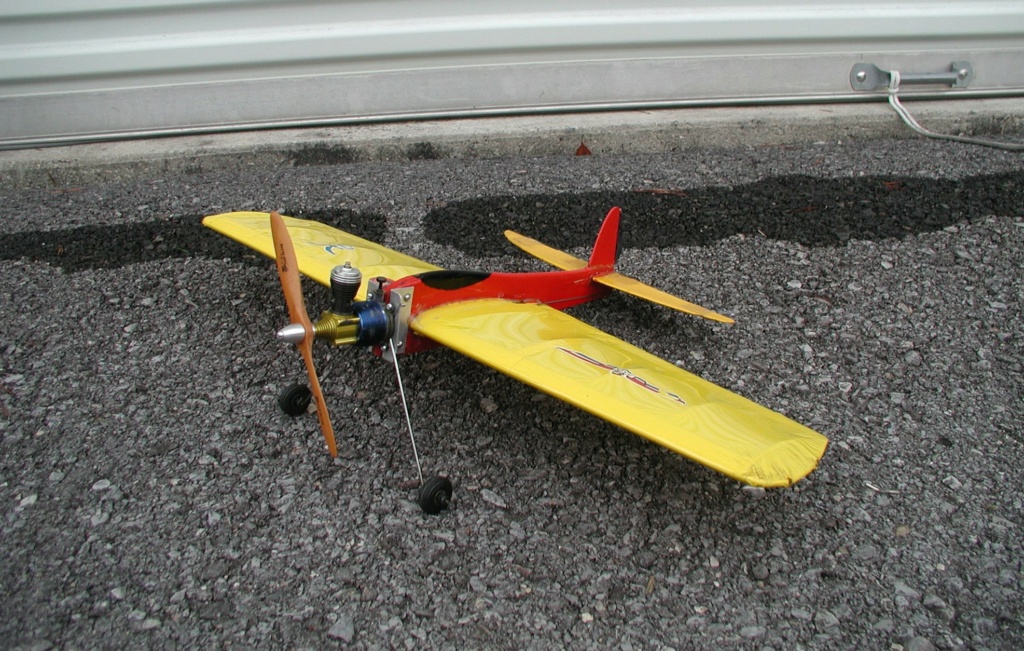 Hitched it up, moved the needle into the green zone but could not bring myself to fuel it up and fly it.  Discretion being the better part of valor. 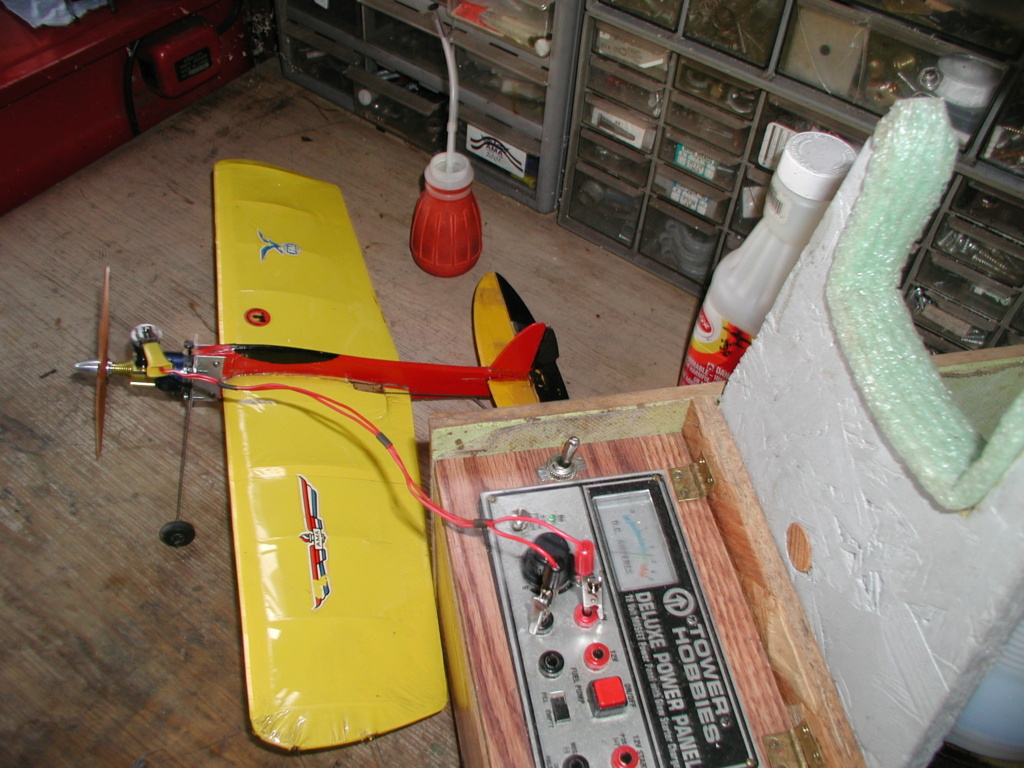 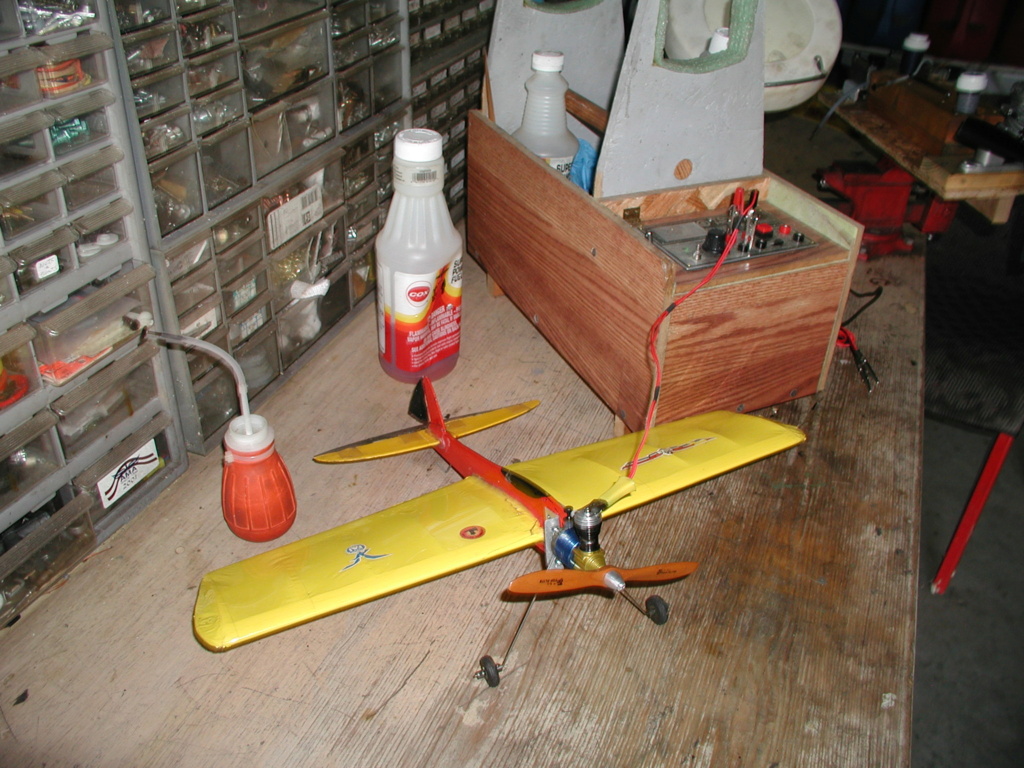 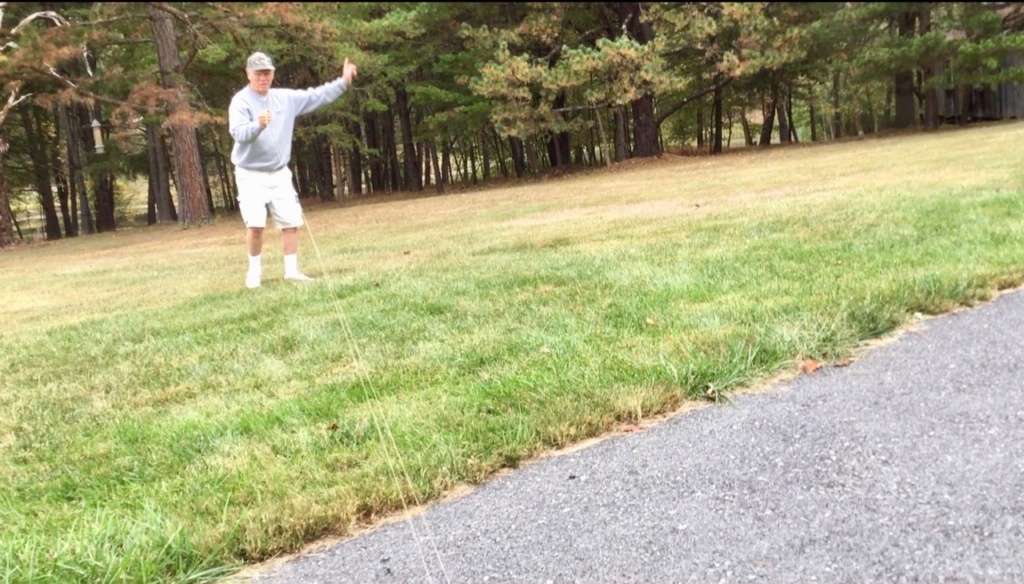 It will be on it's way to Rene sometime this week.

Looking Good !! Man you need to at least run them (Clean up?) now that's funny

Keep um 2 weeks Bob , I am coming up and not ready YET 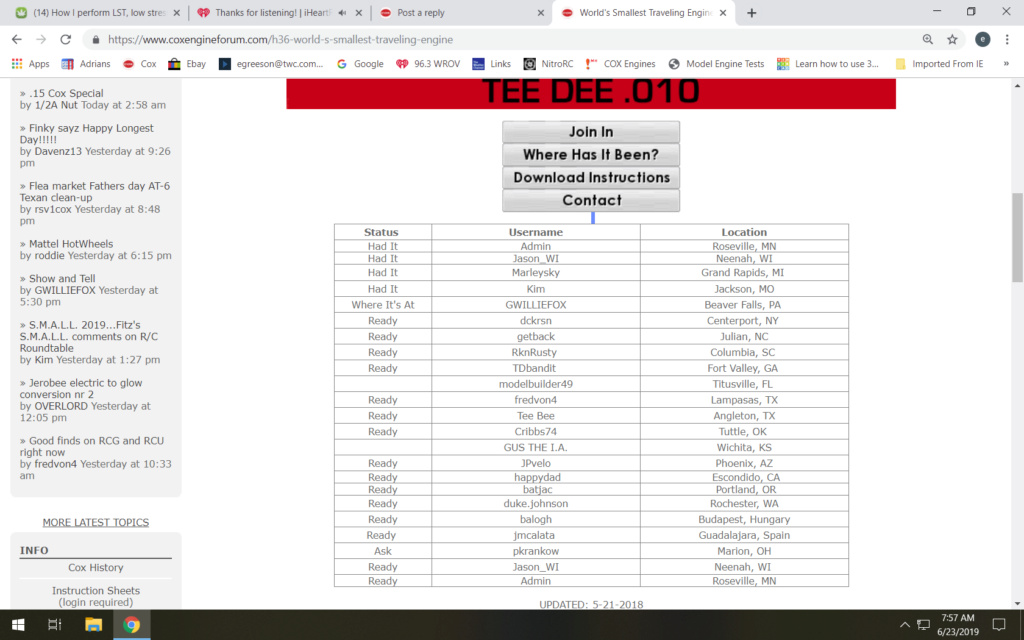 What's everyone using to glue pictures into the log? Glue stick? Whatever it is it works very well.

I photographed every page for safe keeping. 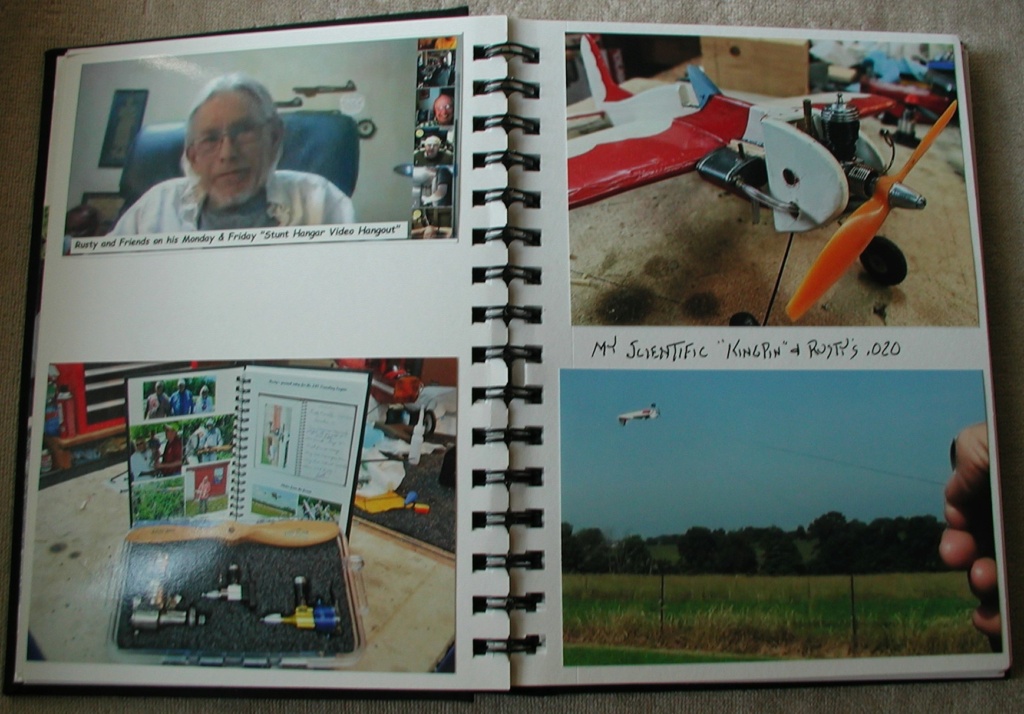 I used small, inside-out loops of Scotch Magic Tape around the backside edges and a few across the center of the photos, then pressed them together with some 12v ballast batteries I keep in the shop.

A bit elaborate, but it really sticks the photos to the page.

@Kim wrote:I used small, inside-out loops of Scotch Magic Tape around the backside edges and a few across the center of the photos, then pressed them together with some 12v ballast batteries I keep in the shop.

A bit elaborate, but it really sticks the photos to the page. 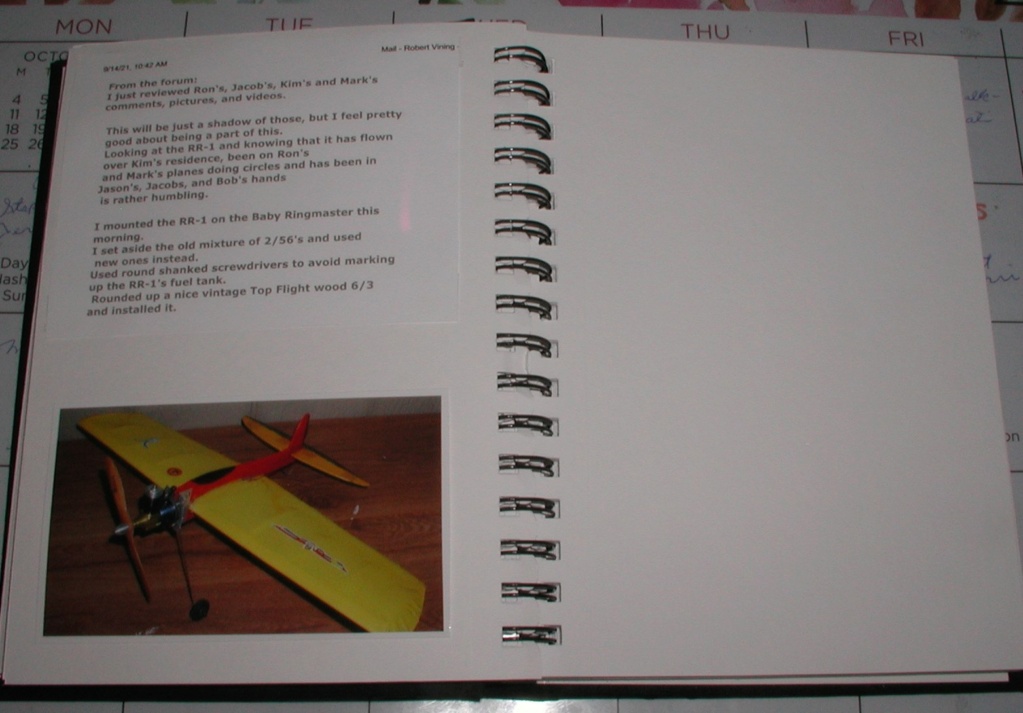 Thanks for the privilege and experience, Jason and Jacob put a lot of work into this.

UPDATE where are they.

FYI Update on "Where they're at" Been to both Bob's and are now in Grand Rapids. 7 Day forecasts indicate warmer than normal in the next few weeks. SO, I'm gonna try and get a couple of runs in and pictures maybe even a video? We will see... 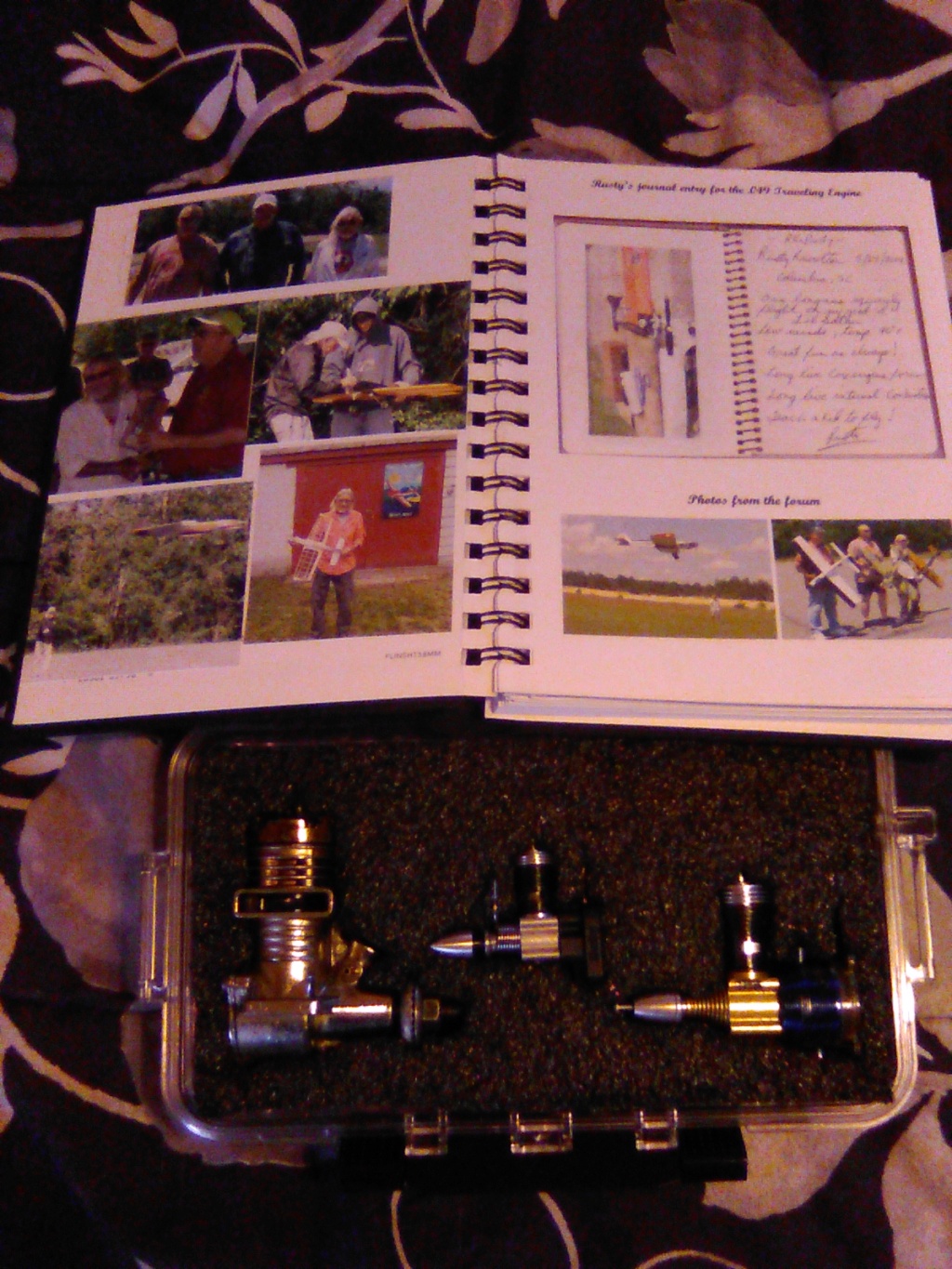 Rene contacted me a few days ago and now the engines are in my possession in Julian North Carolina I'm hoping to run some and fly some. Just having these in possession is enough to bring a tear to your eye Joy To Your Heart...

Glad to see the engines are making their way around!

First off the engines are on there way to modelbuilder49 in Fl. .. Now I would like to report that i had a Fantastic time with the engines and seeing were they have been and the write ups in the book . Although I tried my very best to fly and mainly get a New child or person behind the lines , It seemed that fate was in the way ! I was either put out by the weather or someone just forgot, How important this was to me and the Forum. Unfortunately my son was not here or I know we would have put some air time on the engines !! ( I got planes cleaned up /engines rebuilt and all ) OK oK enough of that but Rustys wish was to get a new person /child to fly . Had to do some work on my new to me panel for glow as you will see . I ran the RR-1 and tried to run the .020 with the special backplate ( that is great work Jason ) but I just could not get more than a slow run .. The RR-1 was screaming pretty good , didn't run the Fox 35 . I want to Thank every one involved in this memorial that made it happen Jacob , Jason and all the CEFers involved  . Here some action from the test stand 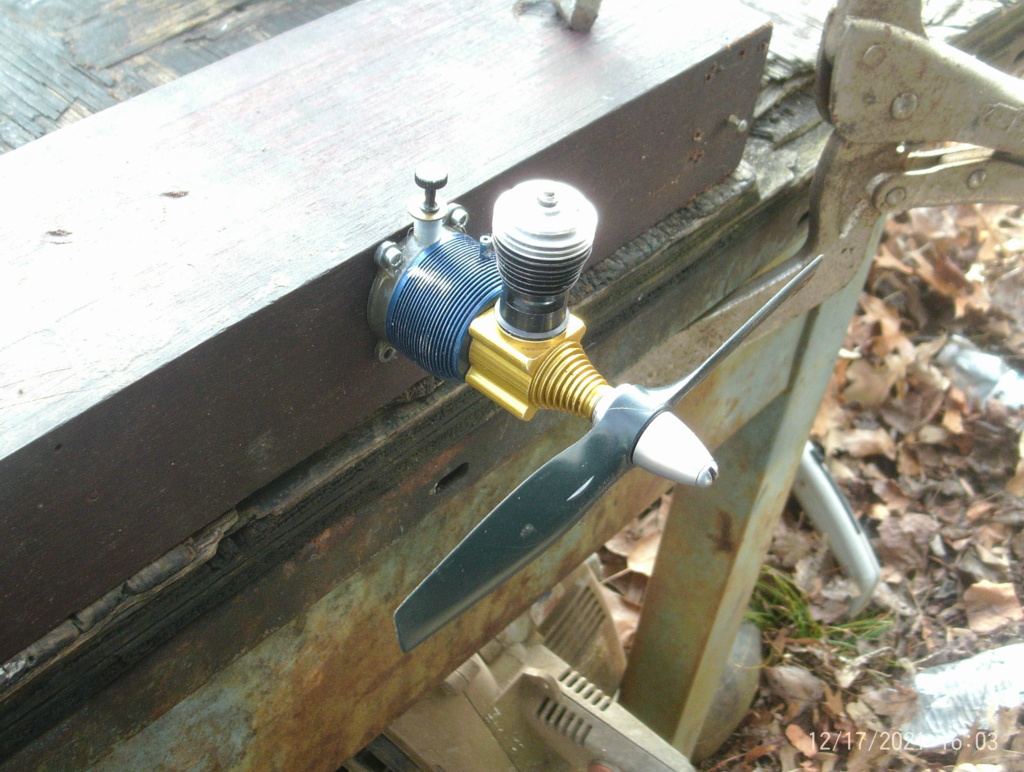 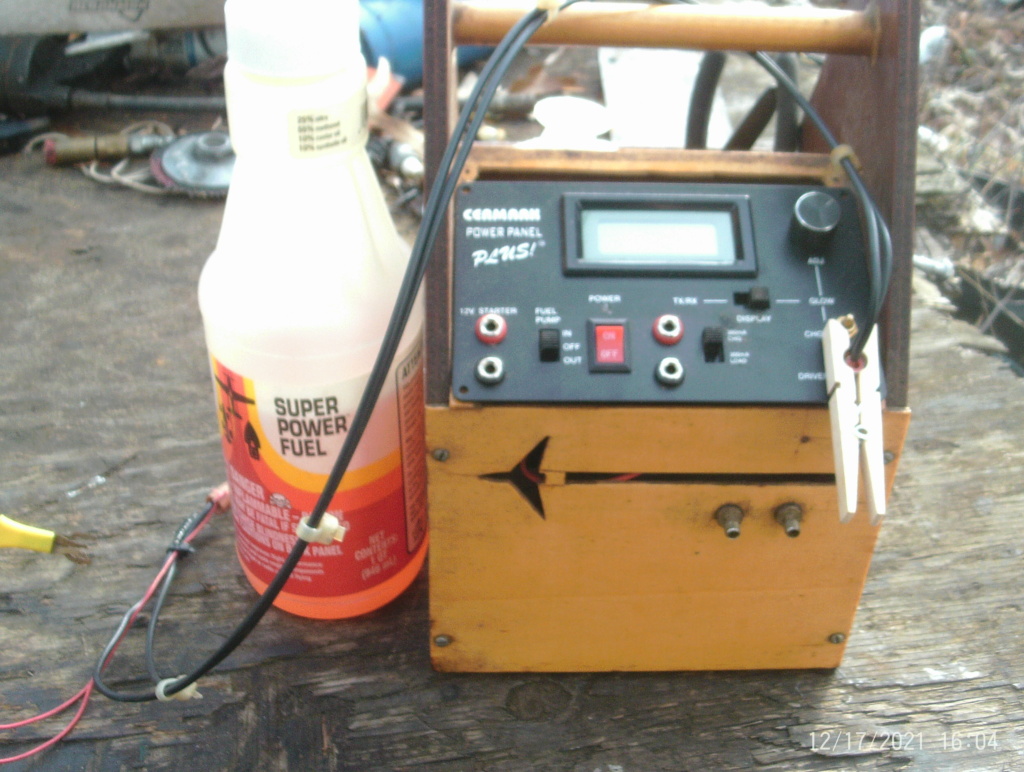 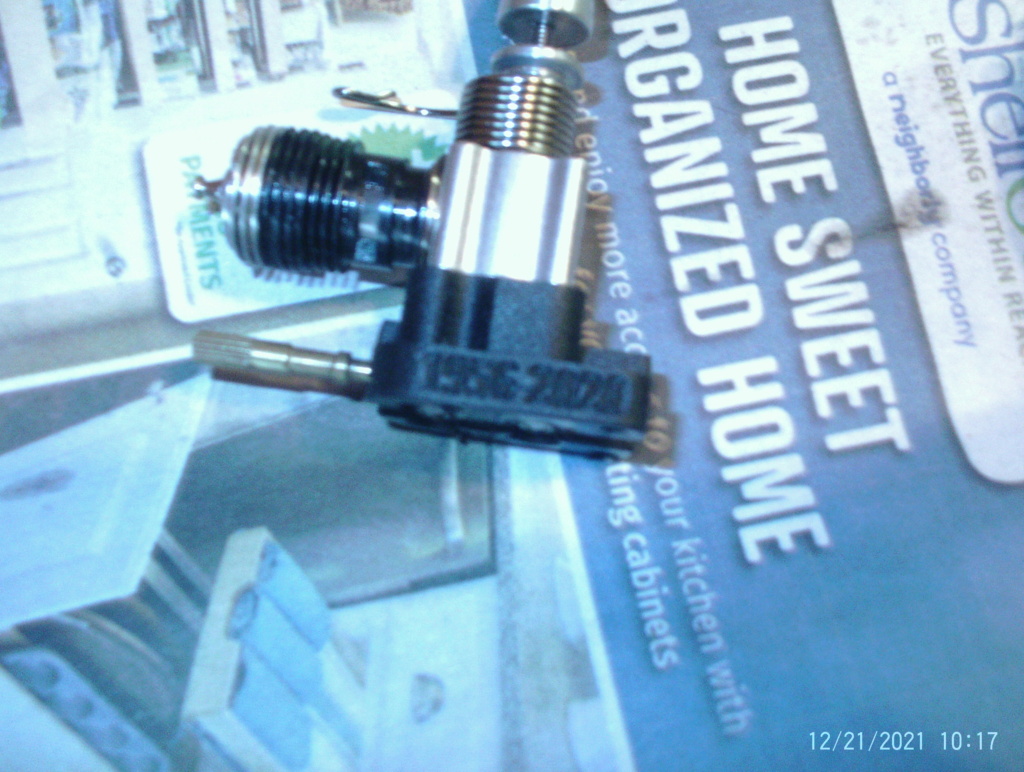 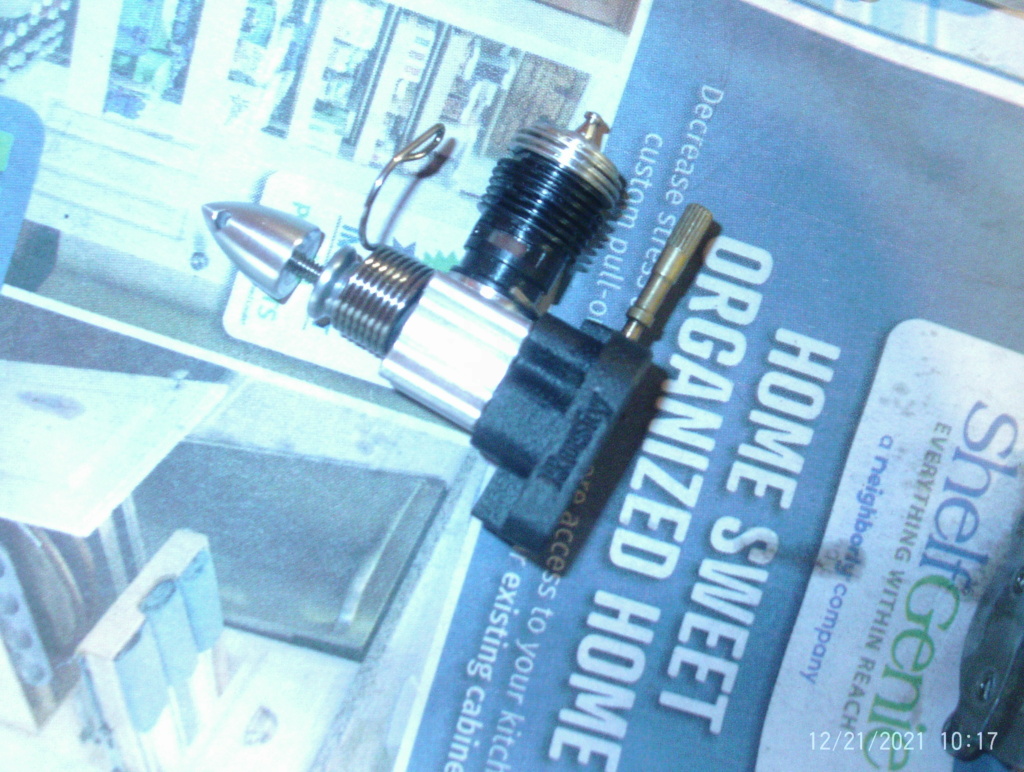 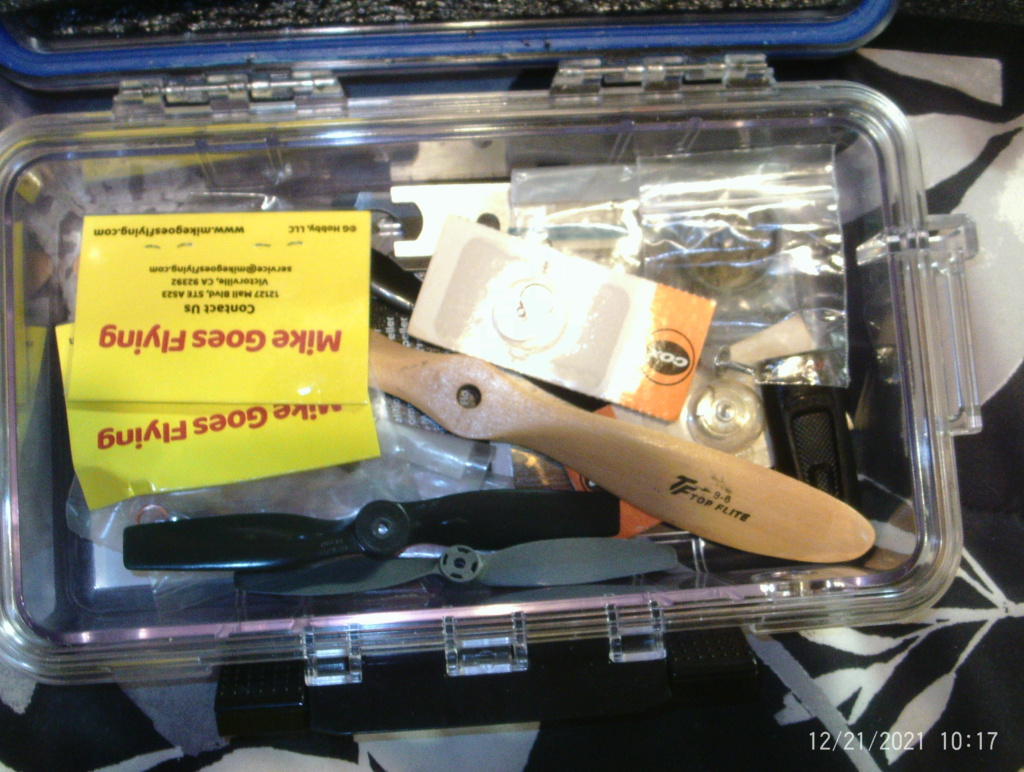 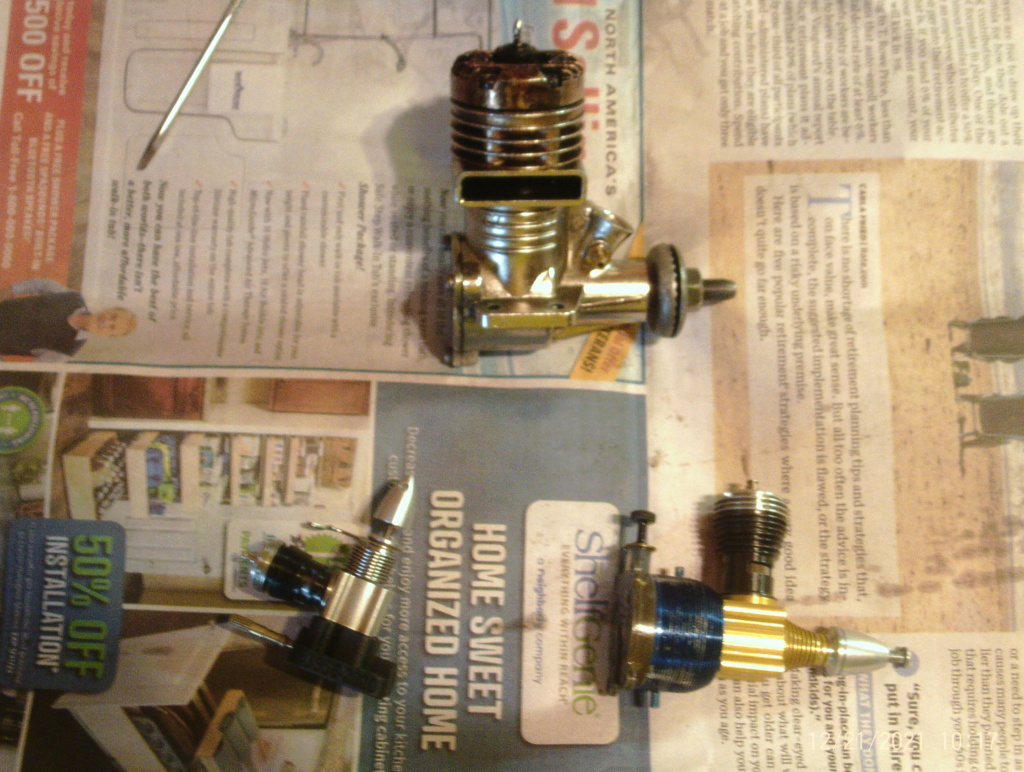 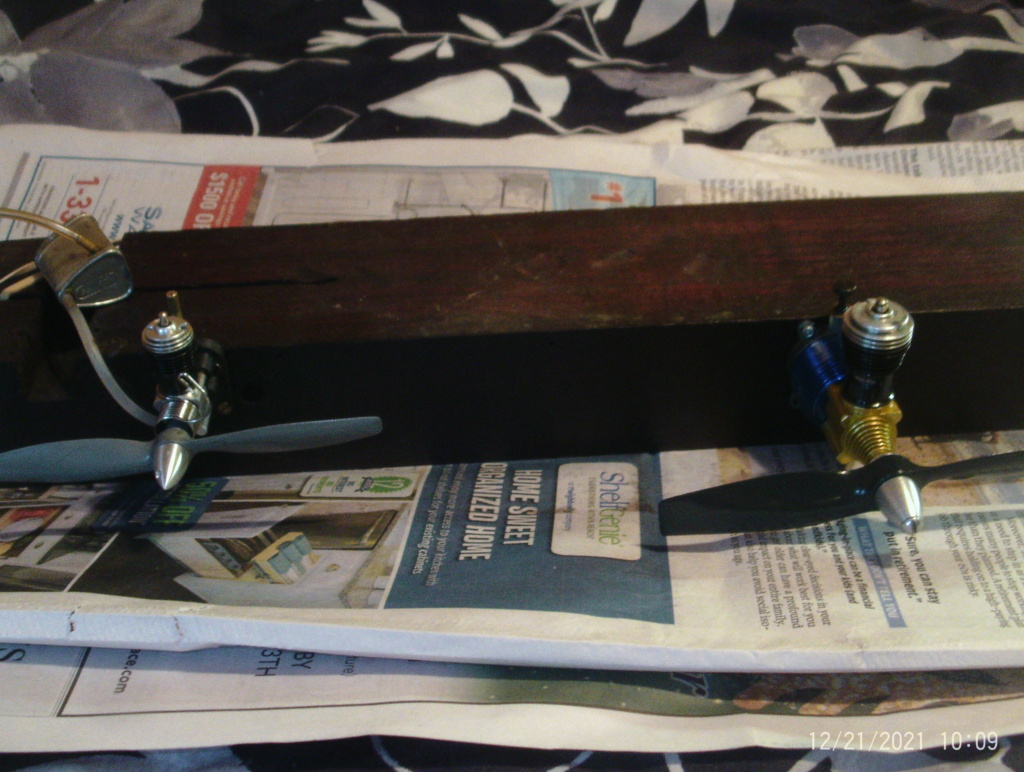 Great Post and Fitting Memorial to our immortal bud, Rusty!!!!

Got to do some back-tracking and really check out these entries again!!!!

I cannot be part of it but am really touched at seeing and hearing Rusty' s engines proudly scream and sadly cry for their immortal master...would like to think Rusty is happily looking down from above at this commemoration.

Congratulations and thanks to all who participate..

Good job Eric! A fitting tribute to the master.

With the slow run on the .020 I wonder if the circlip is in the with the sanded side towards the reed? The reed should spin freely in the backplate. I do have a spare backplate I can send if needed.

The .020 only ran slow with what seemed no compression ?!?! I took it apart to check out the problem Only thing needed was ball reset and i had blown the glow head so replaced w/new from my stock.. I notice that the air flows through the needle valve at 8 turns ,but did seal with a blow /suck test at the reed. It was to cold the next day and forward so I didn't get to try again . I let modelbuilder know and maybe he can get it to run .

Howdy! Well, I received the box today and as I told Getback, it may be a couple of days before I get to "play", given the holidays and family commitments. Anyway, I wish you all a very safe and wonderful holiday season!!