Little Traveler is a modified Sterling "Minnie Mambo" trainer, kitted in the early 1960's, and powered by a Cox .049 engine supplied by Cox International https://coxengines.ca/ .
Fitted with a 4 ounce fuel tank (about 14 times the typical fuel load for an .049 engine), it was hand launched from in front of Olmsted's Fire Department, beginning it's journey to my Uncle Wayne's home in Boaz, 15 miles away.

Supporting Little Traveler was Mike Bloom, who donated use of his pick-up, and Rory Ruble, who videoed the entire flight...giving us an exact time line from launch to landing.  Their efforts and patience made the flight possible.

After an approximately 1/2 hour flight, the little trainer, it's fuel depleted, glided to a safe landing in Wayne's backyard, fulfilling a childhood dream for me, and raising over $1,600 for St. Jude Hospital.

It still flys today, pretty much as it was back in 2009...just missing it's pick-up truck escort.
Thanks again to Mike and Rory!

Originally planned to use a Golden Bee (nostalgia), then a Dragon Fly, before deciding to go non-stop with a 4 ounce tank and a "Red Scorpion" .049 from Cox International. 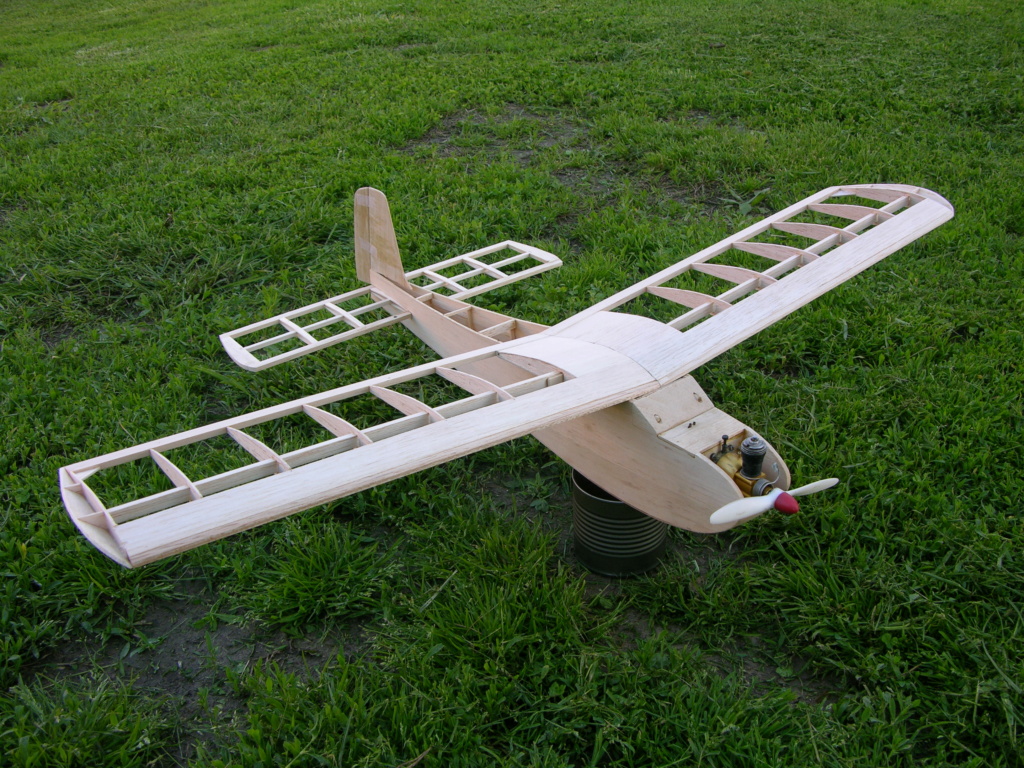 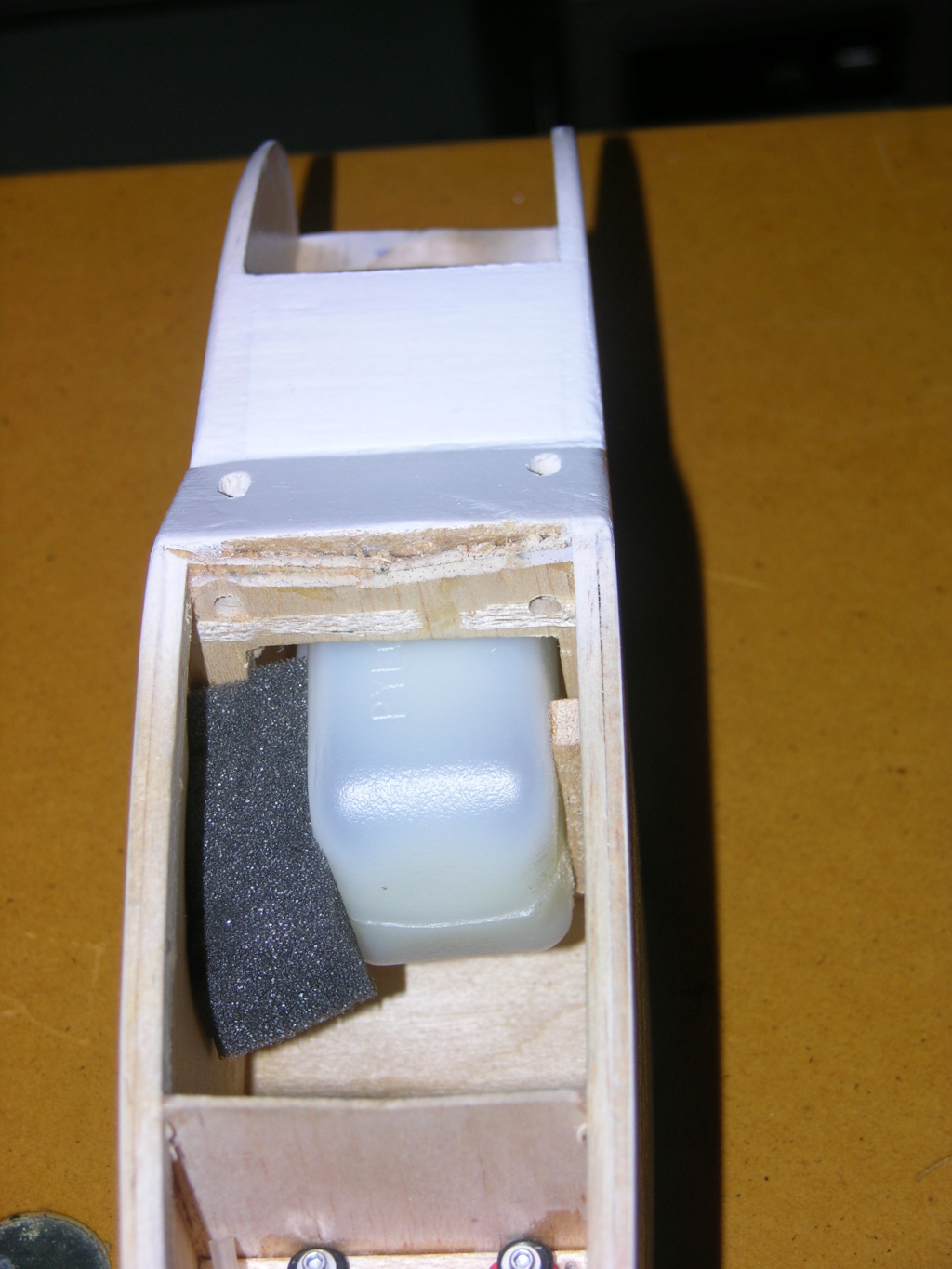 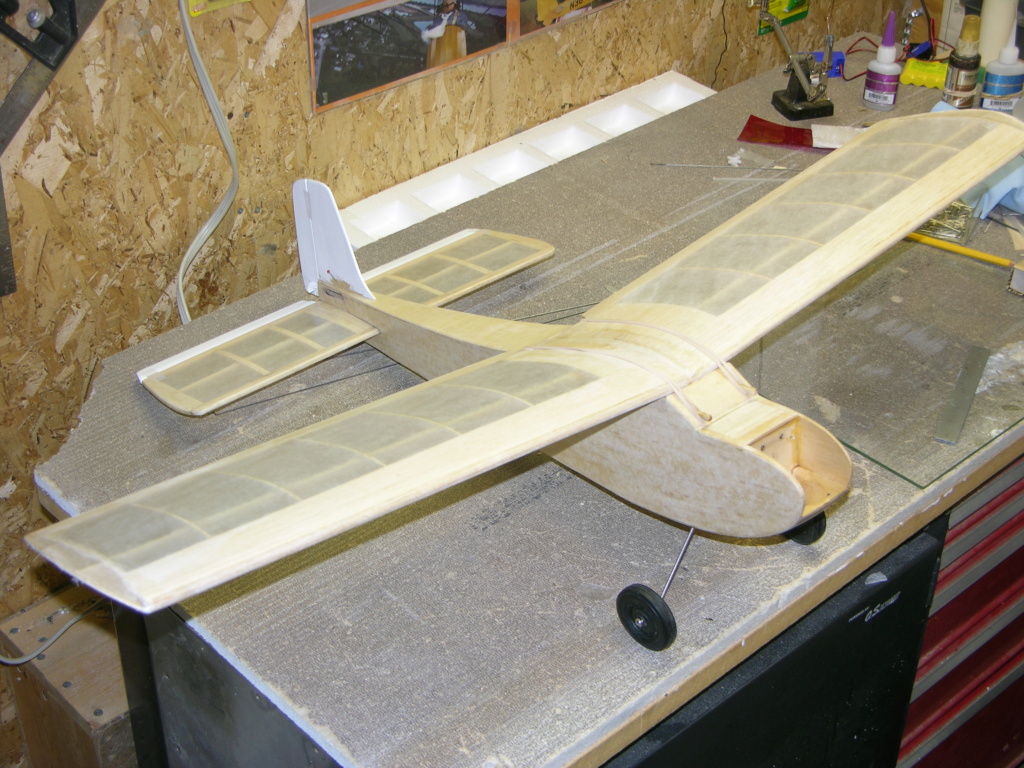 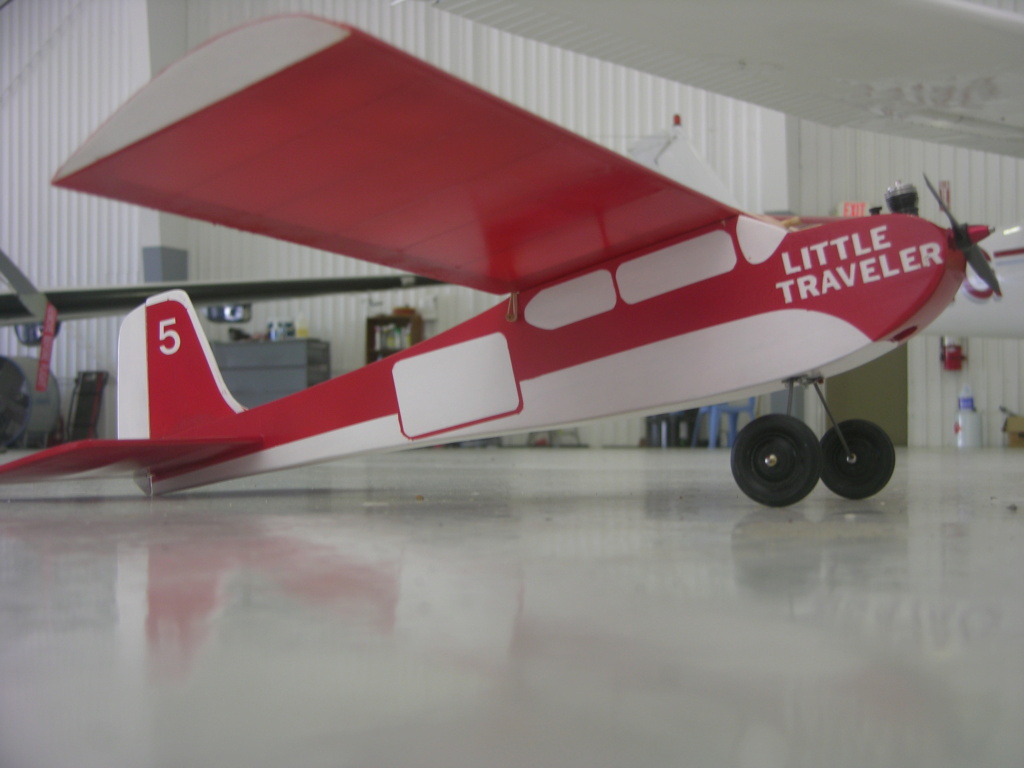 Weather delayed Little Traveler's flight to the next  day---Saturday, the 10th. 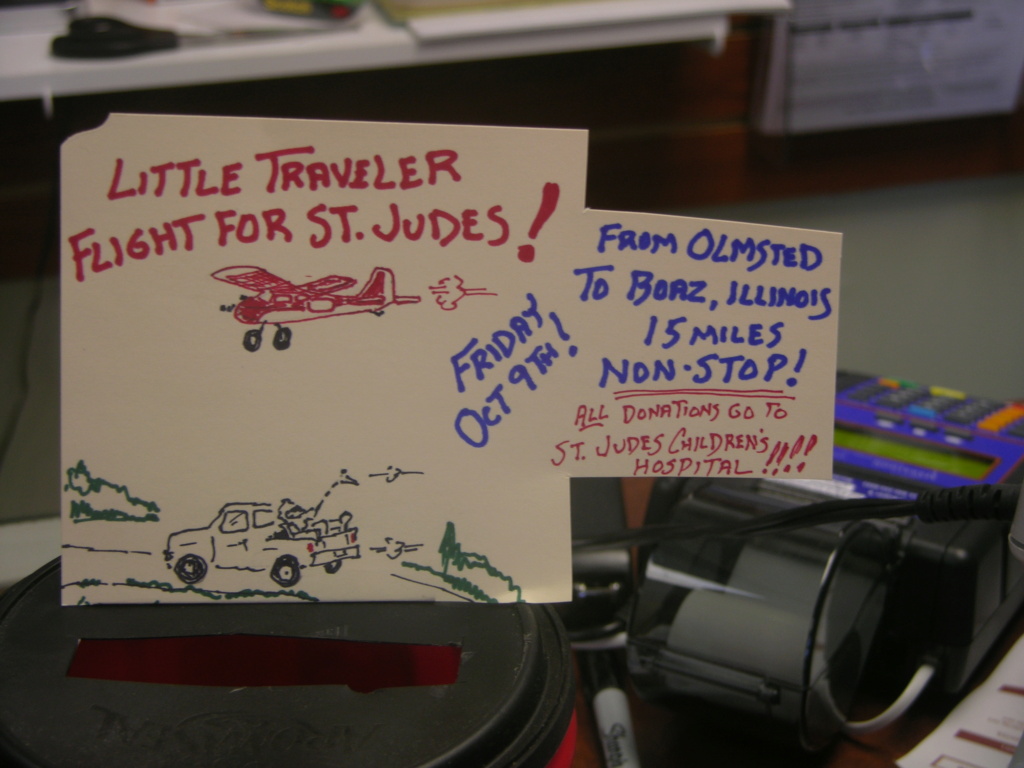 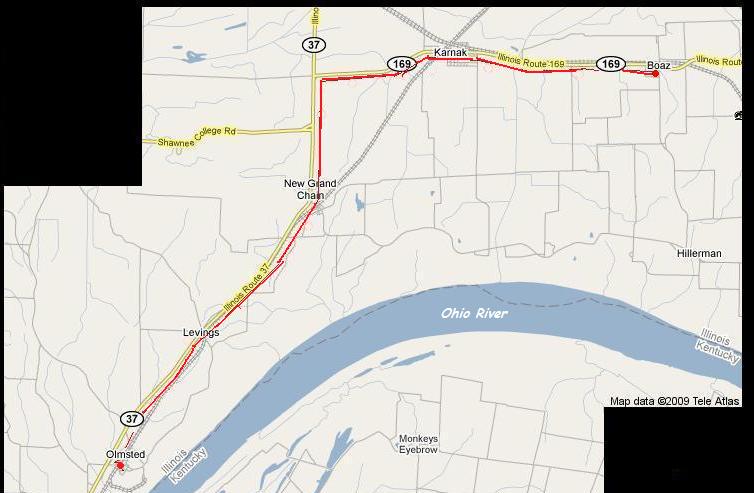 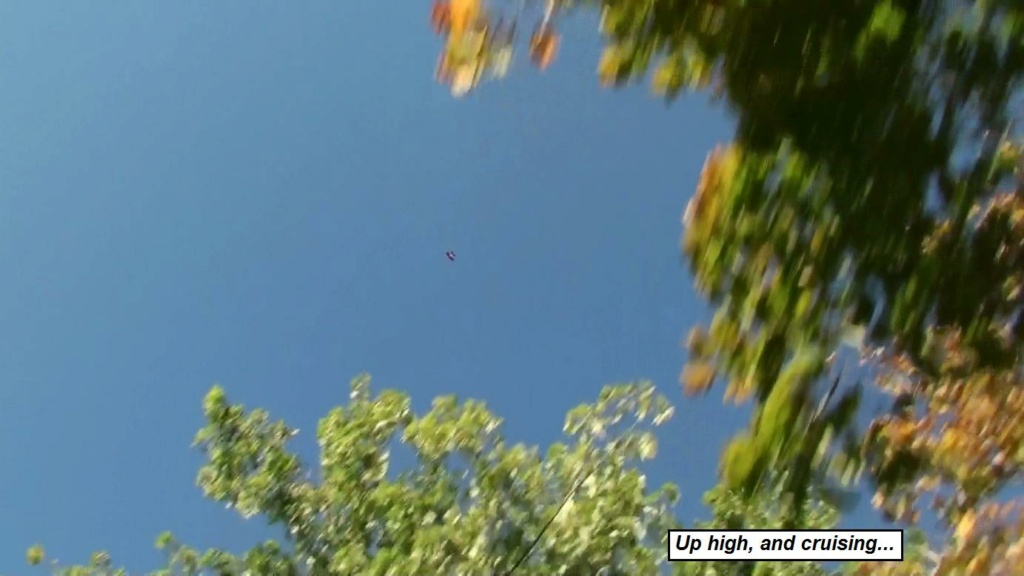 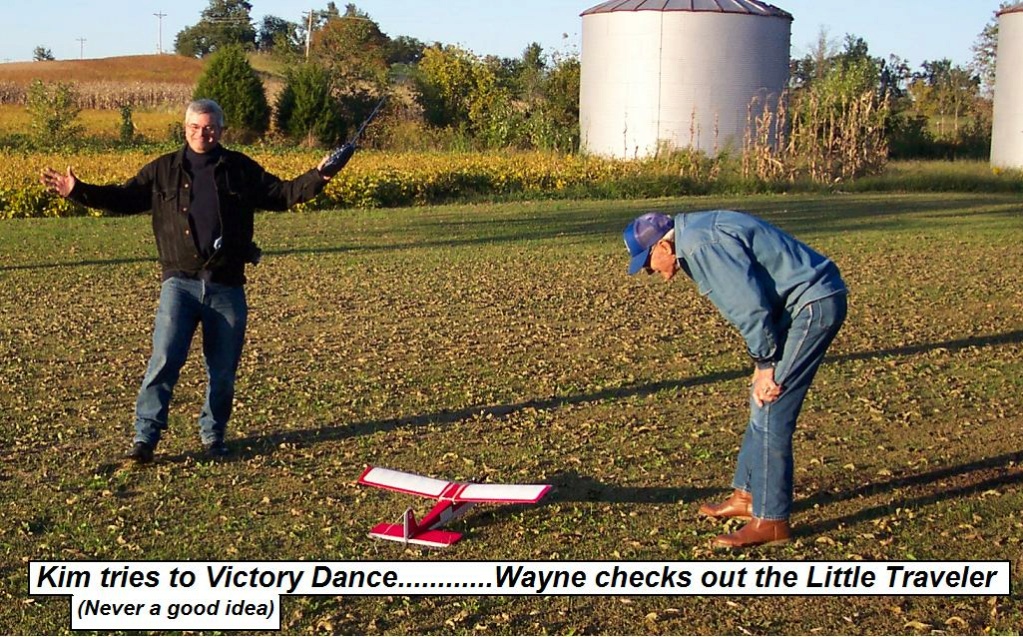 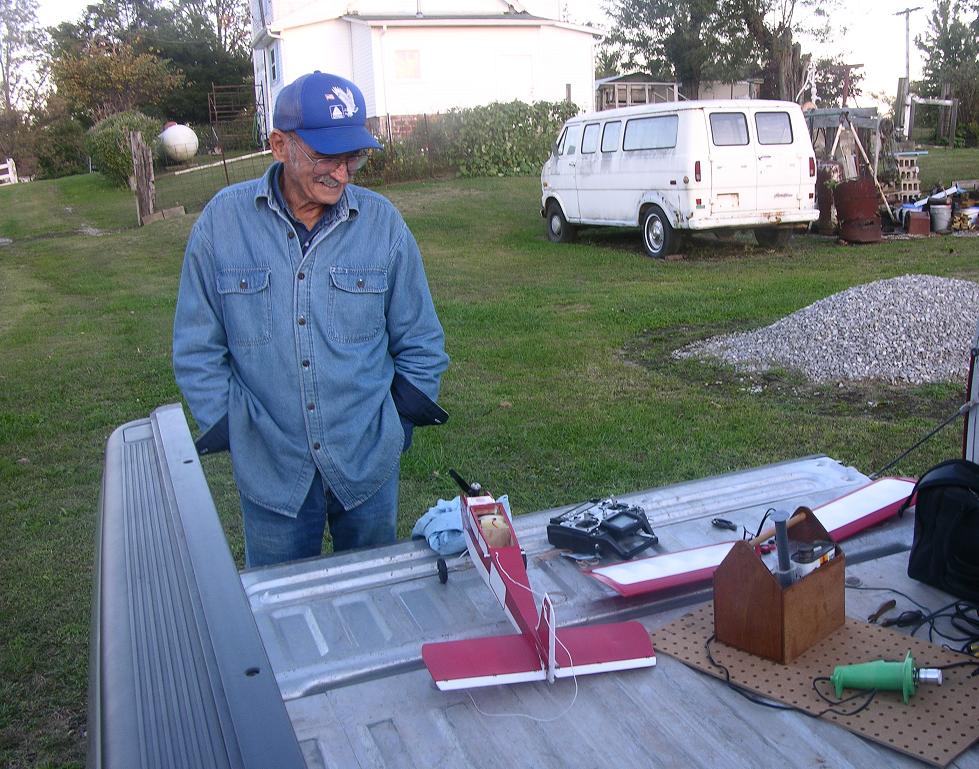 That deserves more than a thumbs up. Way cool, nicely done Kim. My son and I watched the video together smiling every time you could hear the engine in the background. Ken

@Ken Cook wrote:       That deserves more than a thumbs up. Way cool, nicely done Kim. My son and I watched the video together smiling every time you could hear the engine in the background. Ken

Mike and Rory are due a BUNCH of credit for their help in the project:

Mike----for not only volunteering his truck, but ALSO for NOT pulling to the side of the road and kicking our butts as we alternately hollered at him to speed up or slow down.

Rory---for his work with the camera, which he actually apologized for "not getting better footage". He was using my Sony "Handi-Cam", which had only a flip-out LCD screen for a view finder. Great for living room or backyard birthday parties, but lousy for trying to track a tiny speck with the setting sun shining on the screen, making it near-impossible for him to see his subject. Needless to say, I was crazy-happy with the results of his efforts!

We had us a big Celebration Dinner, and I went to work, tracking down pledges!!!!

Kim , You are a GOOD person at heart

And one darn good pilot

Thanks for sharing this with us .

Beats dumping it in the river Kim.

Enjoyed it.  Some observations:

Loved the lawn chair in the back of the pickup.

Wonder what the guy in the passing car thought.

To bad Lucky Lindy famous for extending the range of the P-38 wasn't around to tune the engine, could have been a round trip.

Beautiful plane, great video, and a great cause. Thumbs up to a job well done Kim and crew! Oh, and lets not forget the great flying too.

Ohh Kim, I renew my greetings and congratulations !!, What a beautiful memory, sincerely something wonderful.

I like that adventure and what a good team there to carry it out!
Uncle Wayne is an idol!

Did I miss something?
!
Bob

Did I miss something?
!
Bob

Anniversary of a Fund-Raising Flight back in 2009: