Log in
Search
Latest topics
» NZ here we come.
by Oldenginerod Today at 12:04 am

» Couple Kittens followed me home..
by Michpatriot Yesterday at 6:56 pm

» Half A Scorpion More than a Trainer
by rsv1cox Yesterday at 5:34 pm

» Got the modeling bug this past weekend
by roddie Yesterday at 4:57 pm

» My Mazda RX-7GSL-SE build log with the occasional balsa inclusion
by rsv1cox Yesterday at 4:20 pm

» How's the weather?
by GallopingGhostler Yesterday at 3:38 pm

Yes.. and BTW.. awesome thread Mark. Is there the possibility to fit an OEM exhaust-shield between the cases? I lost my pics.. but it's a stamped-steel part shaped the same as a case gasket.. and having a protrusion designed to deflect hot exhaust gases. Maybe it would provide a friction/detente for your faux cylinder/needle.

Why does the rear glowhead loosen-up? Maybe another gasket or two would help?

Here's an image of the Bee engine's exhaust-deflector. 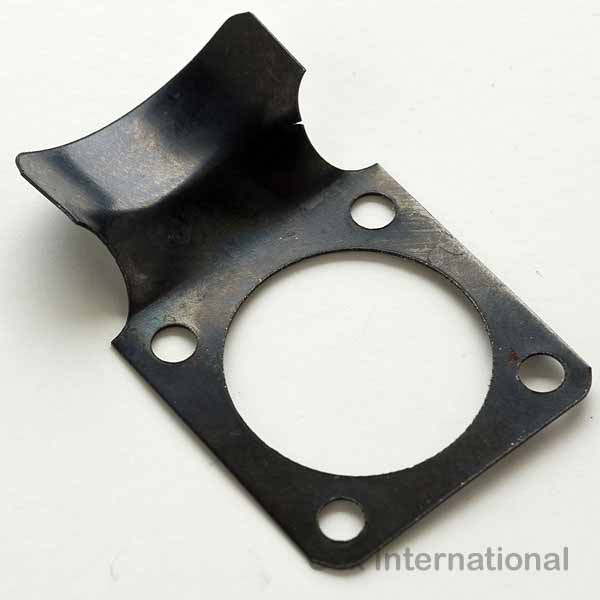 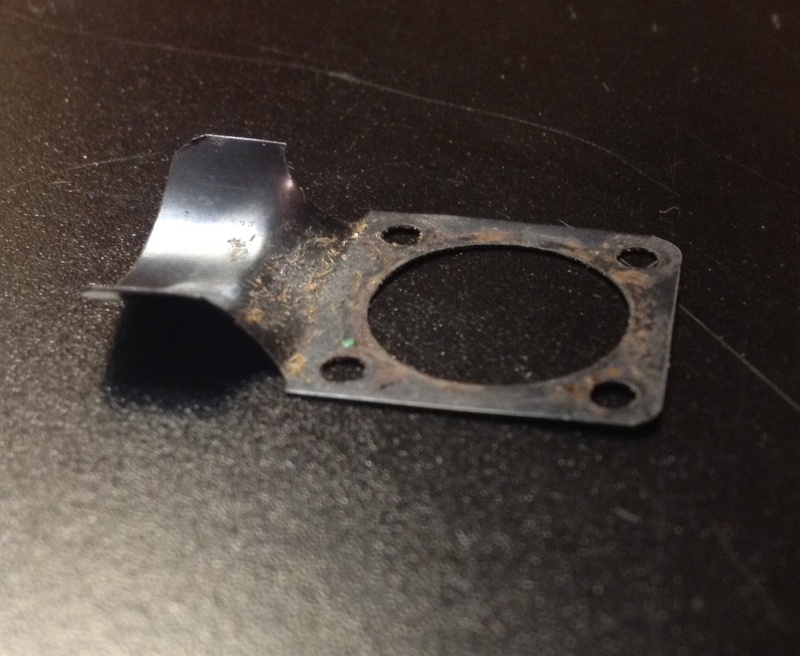 A short piece of wooden-dowel in-between with a flat/notch filed might stay in place.. at a minimal weight penalty. Basically a friction-collar.

Great idea, Roddie! Not between the cases, but between the Goldberg mount and the rear case. That should work. Let me think on it for a while. Maybe a thin sheet of cork or rubber to rub against the cylinder. I should have some cork sheet stashed away somewhere for either clarinet repair, or Mosin bedding.

With the back case in place I screwed in the needle valve to see where the fuel nipple is.  I then marked the position and drilled a hole in the bottom of the rear case. 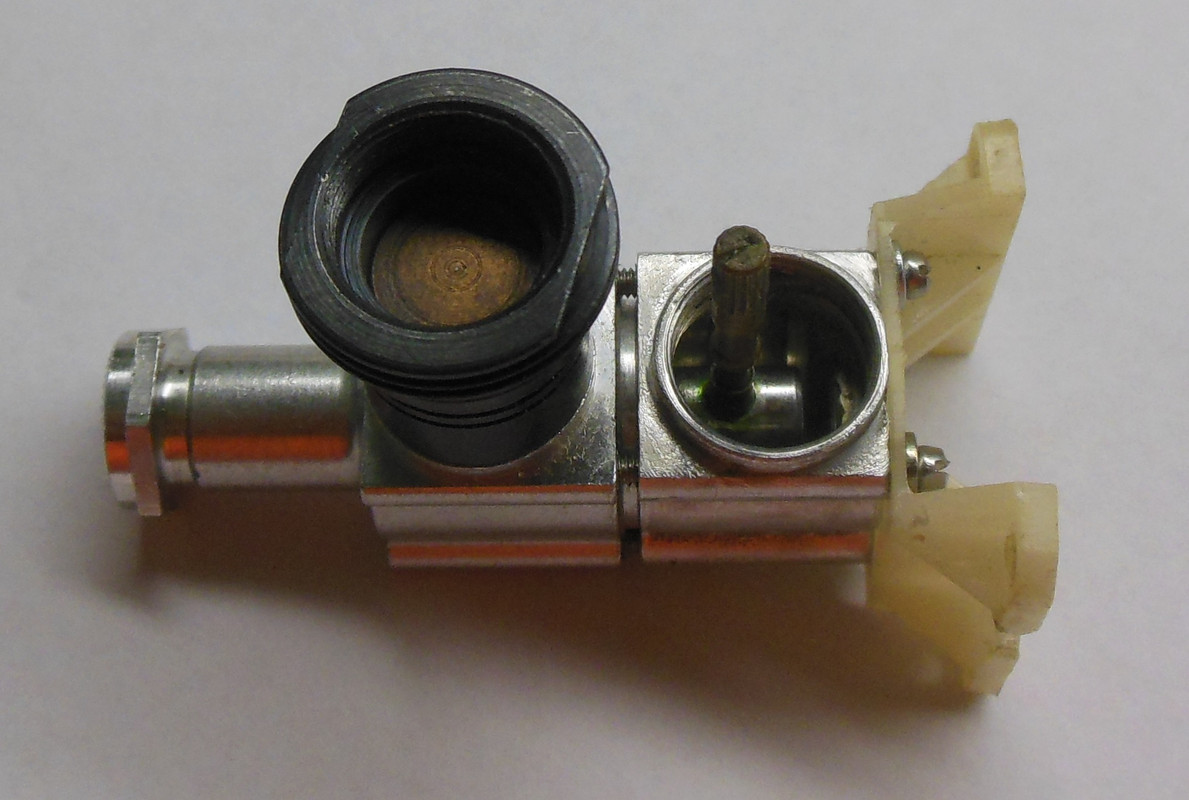 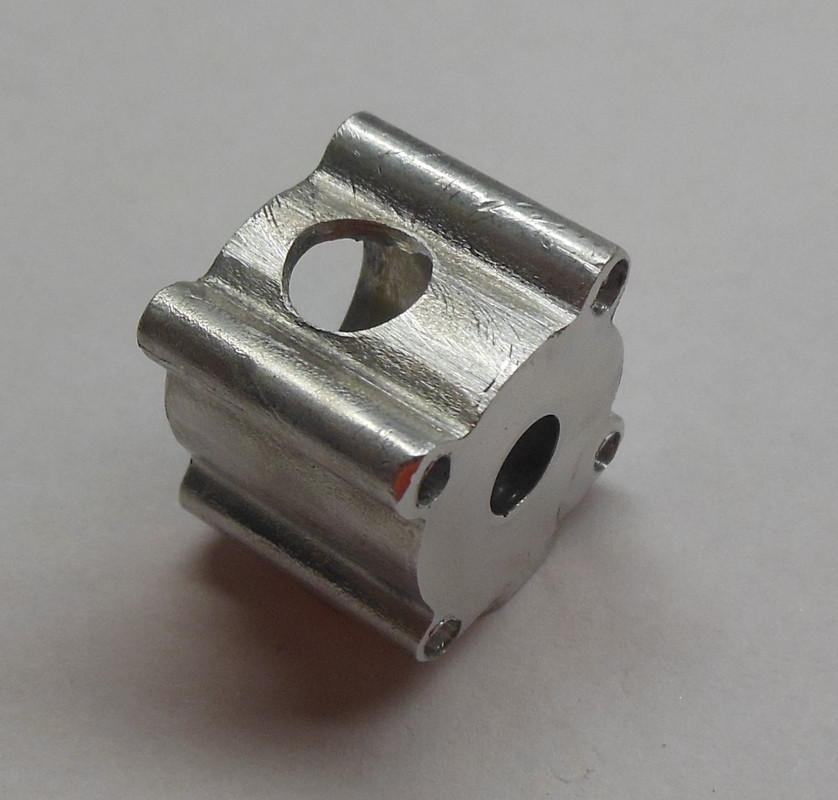 Then I put the two cases back together. 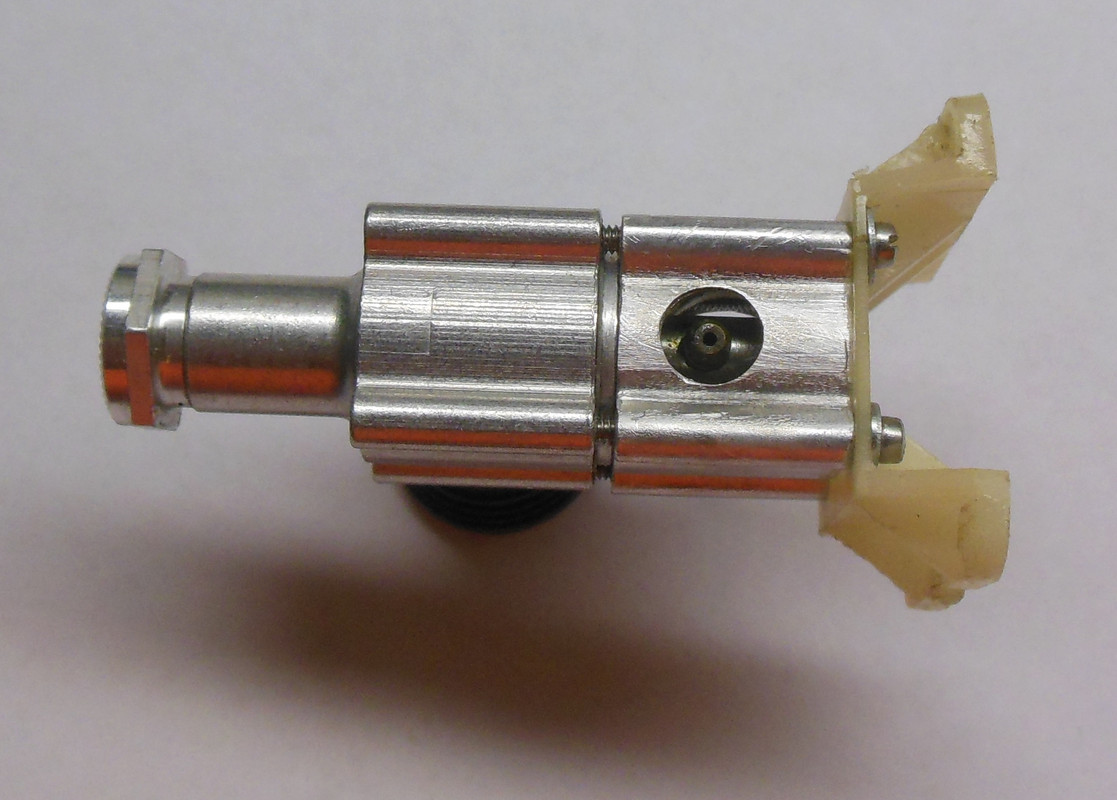 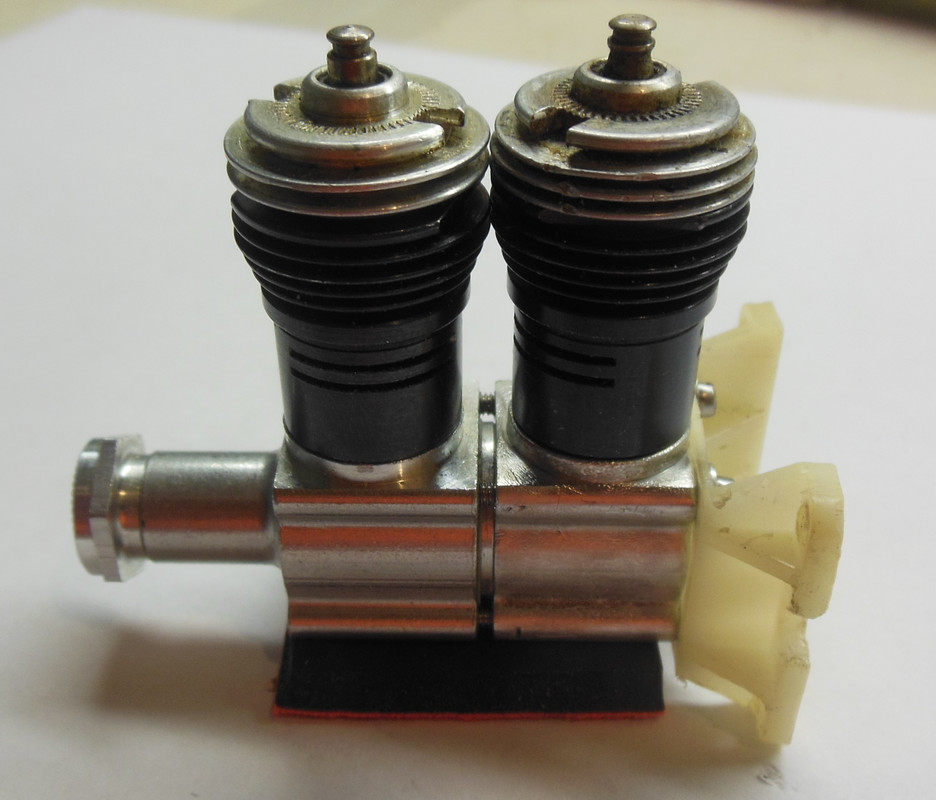 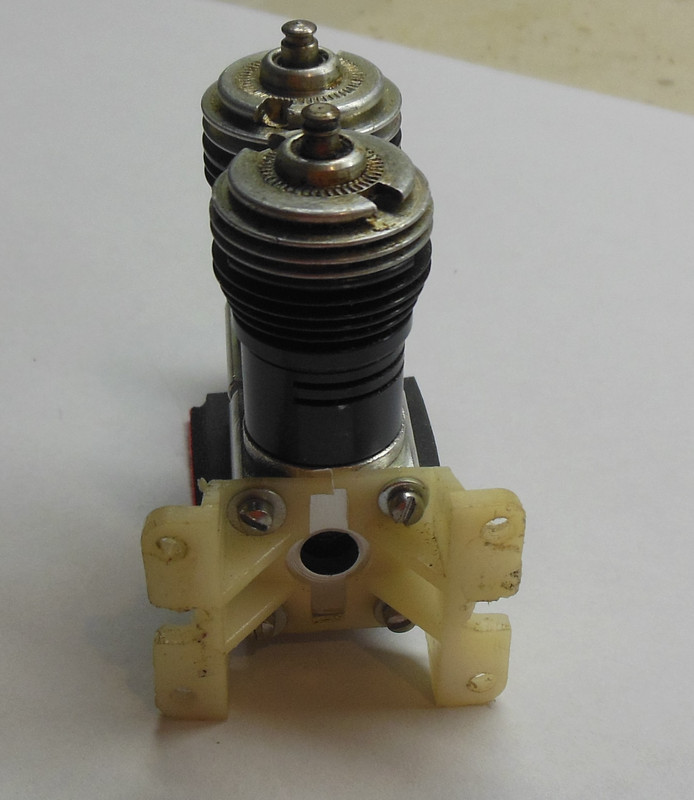 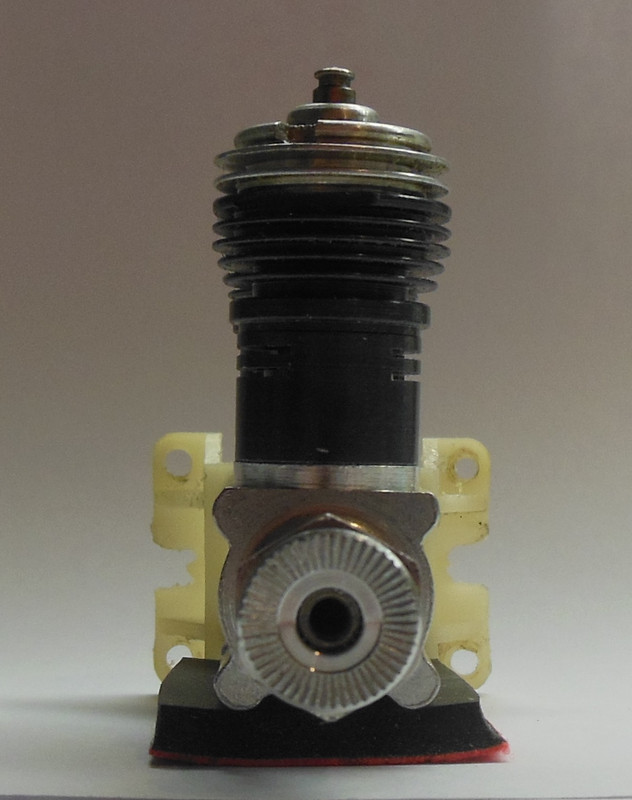 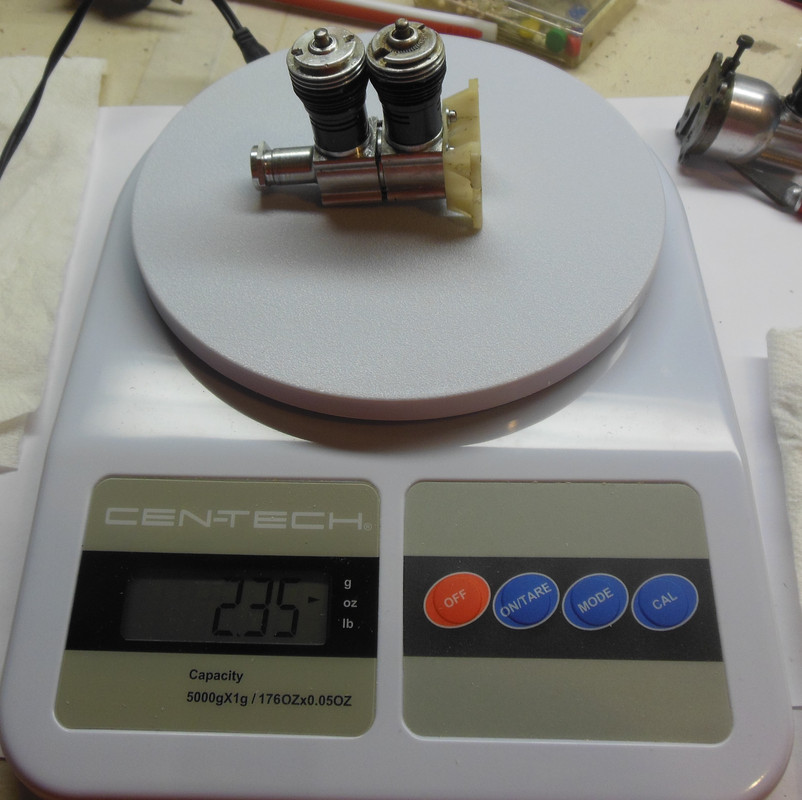 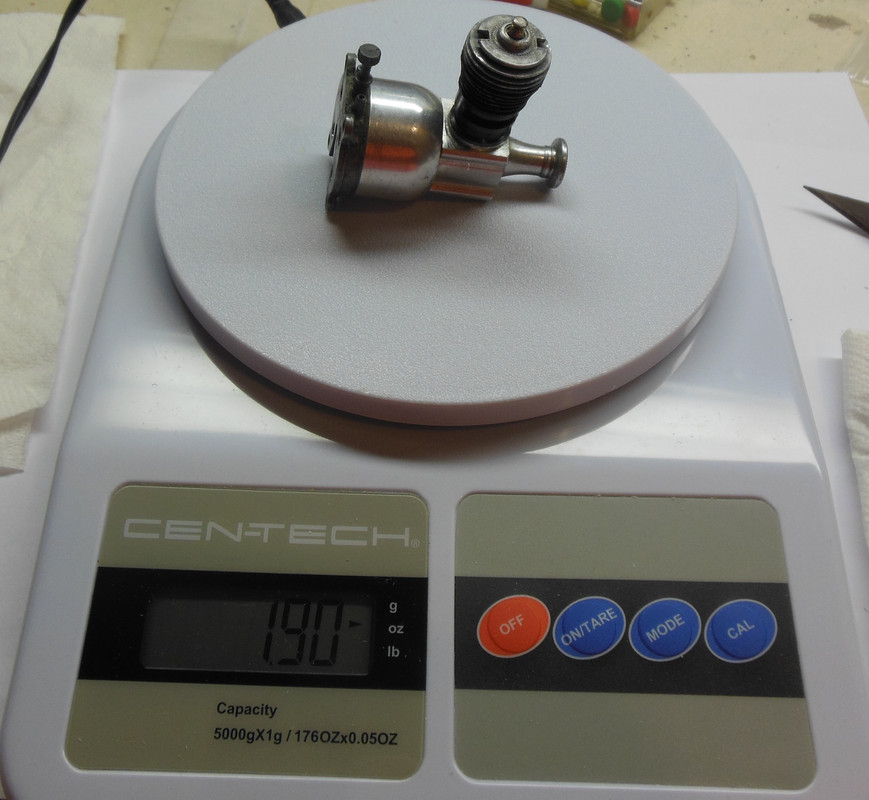 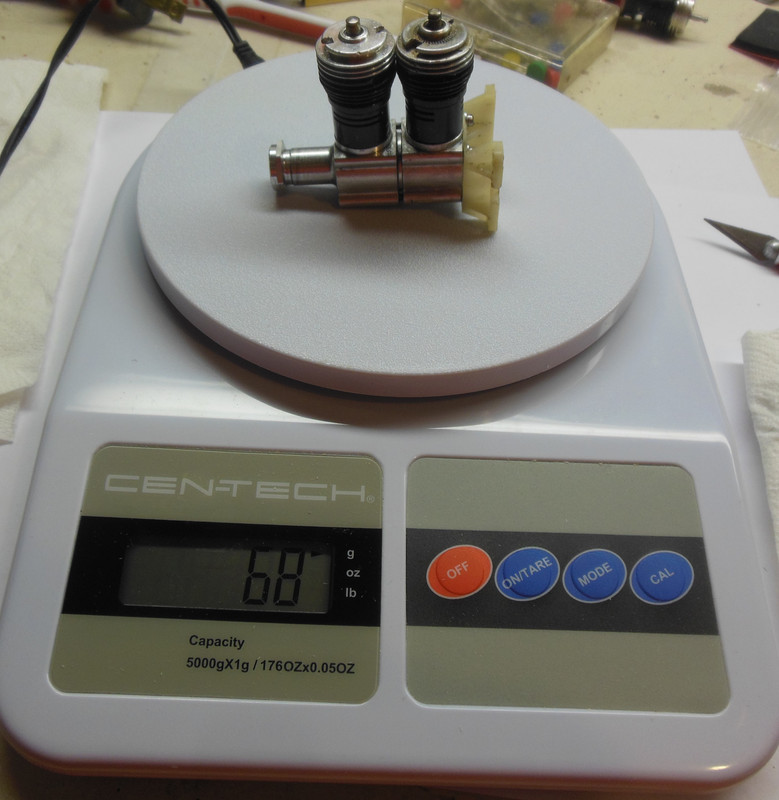 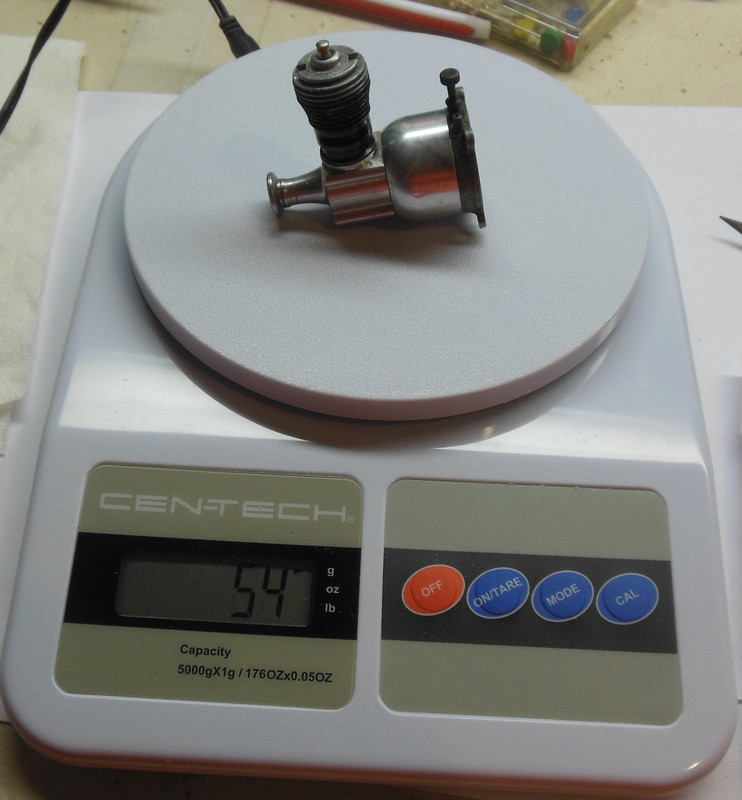 For the faux plug I dug around the old engines box looking for a bad glow head and found an engine with a glow head missing the filament. 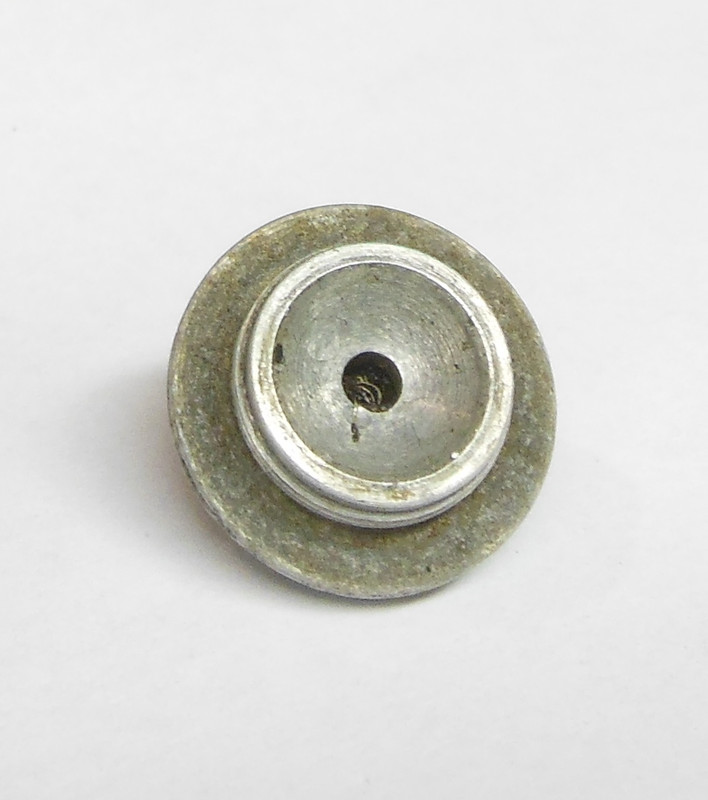 Everyone wanted to know how I was using the cylinder to needle the engine.  The obvious method I was going to use was with a piece of fuel tubing to rotate the needle valve.  I didn’t want to ruin the existing needle on the reed valve assembly. So I dug around and found a spare fine needle.  I cut the top off of this and then slipped a short length of small fuel tubing over the stub.  As I said, I didn’t like my first idea.  So I just did a quicky change to try out my new idea.  All I did was cut a shim from a cookie tin for the fuel tubing to go through.  The fuel tubing sticks out of the top and when I put the faux plug on, it compresses the fuel tubing and traps it.  Thus, when I rotate the cylinder, it rotates the shim and the small fuel tubing attached to the needle.  I started off by opening the needle valve three turns, then installed the cylinder in the case backed out ¾ turn from all the way in.  Then I tightened the faux head down.  Unfortunately, I had a little too much fuel tubing sticking above the shim, so the head didn’t tighten down as I’d hoped on the test I did the other day. 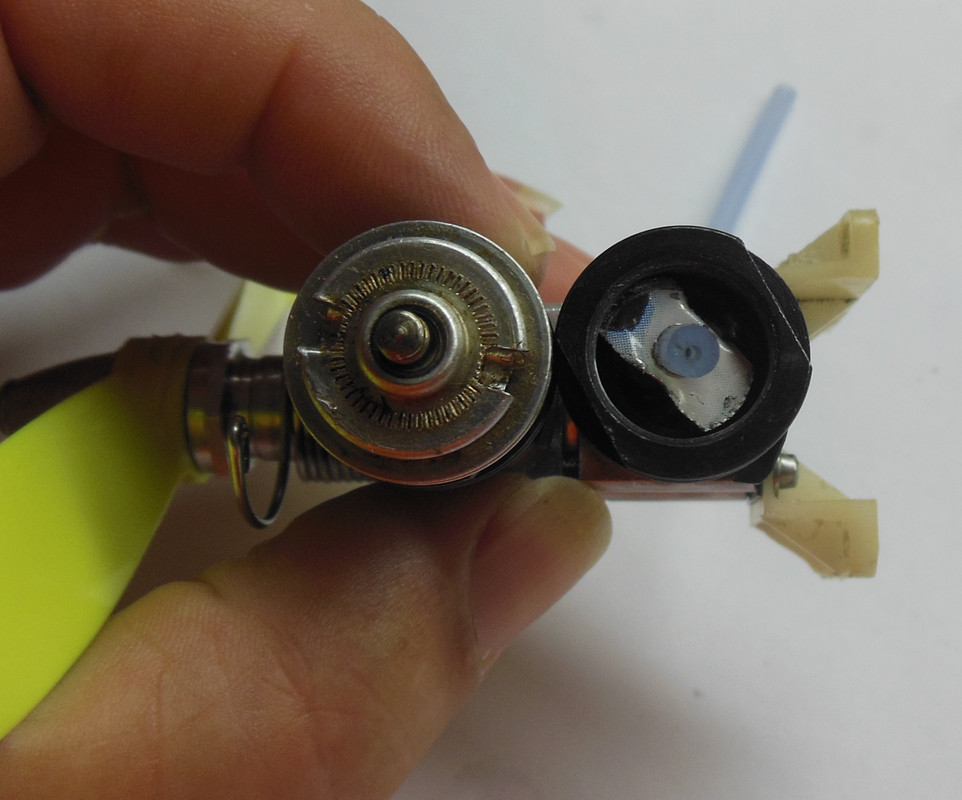 Now that I know the idea works, I pulled the tin shim and made a new insert from brass shim stock.  I took a glow head gasket and put a tape backing on it.  I trimmed the tape around the outside of the gasket and taped it to the shim.  Next I used a Sharpie to mark the outline.  After that I drilled out the center for the fuel tubing and then trimmed the insert to the same size as a glow head gasket.  I put the insert in place and pulled the tubing through the hole.  Installing the faux head seemed to do much better with this brass shim and it tightened down much better than the tin shim did. 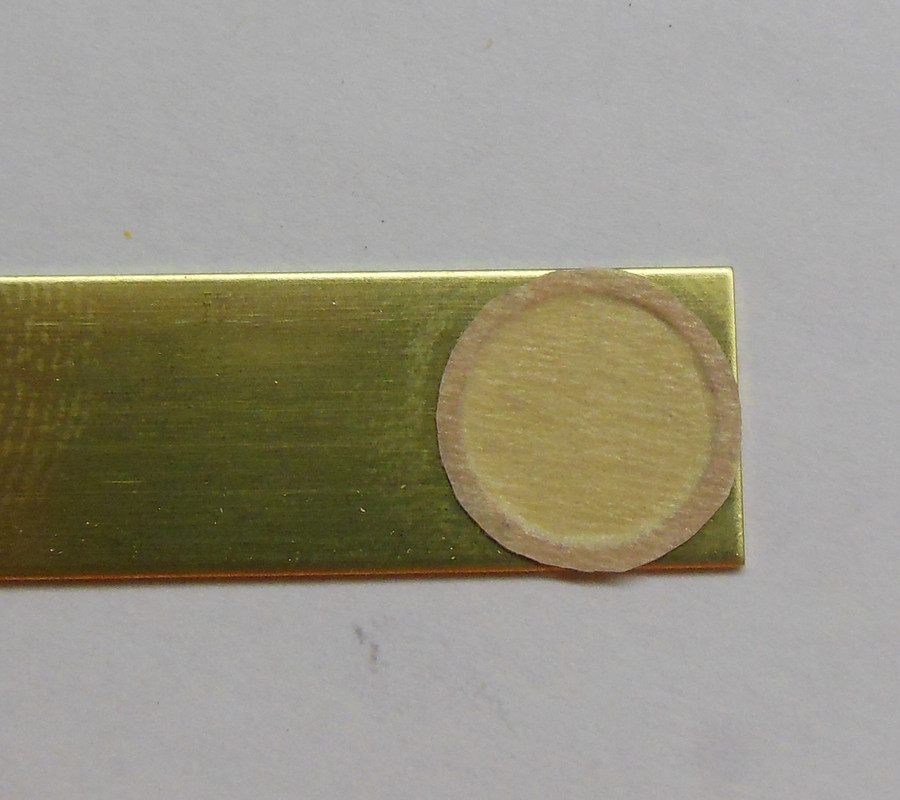 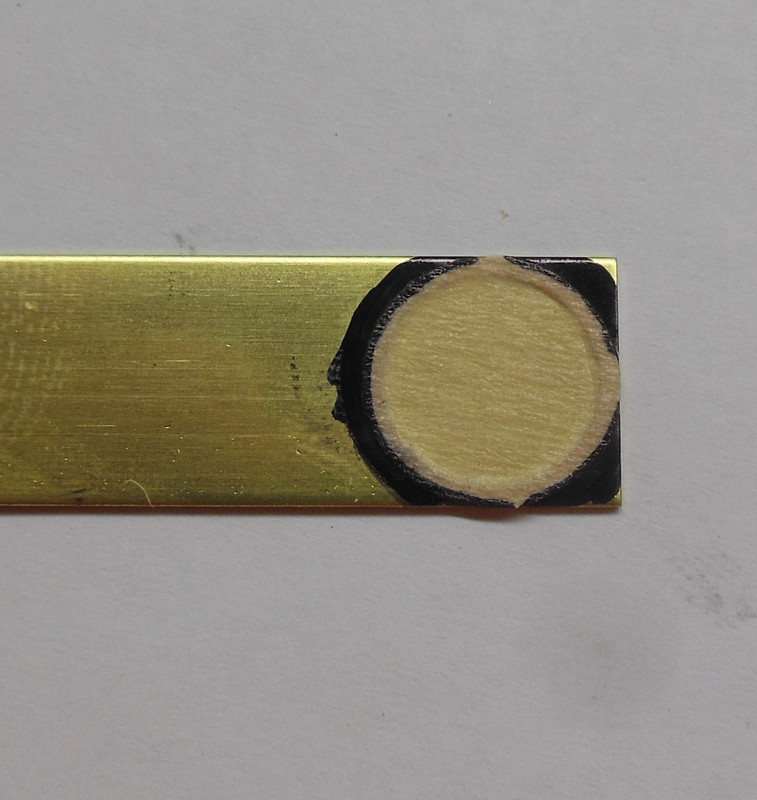 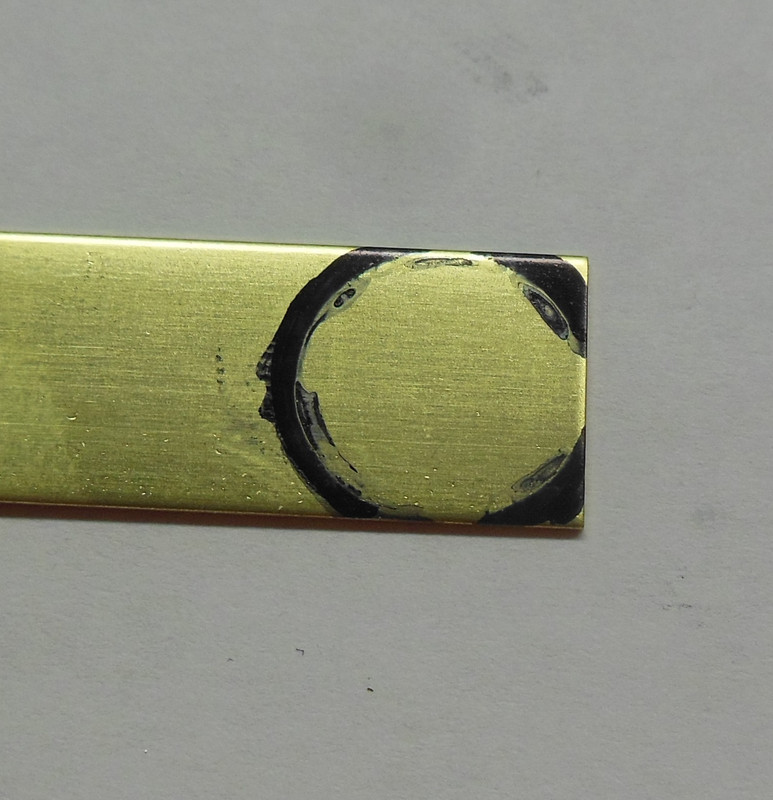 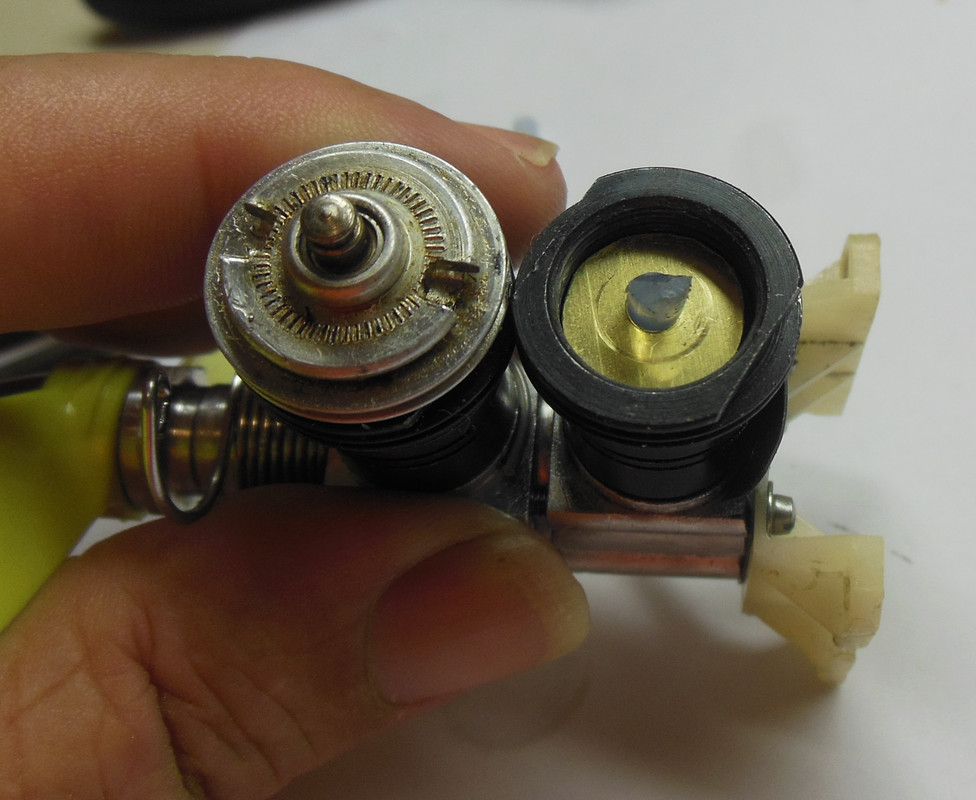 Lastly, I went ahead and dug out a cylinder heat shield and installed it between the rear case and the Goldberg mount.  I have to admit that Roddie’s idea to use the heat shield to provide friction resistance to the cylinder was be…  ***ahem***  Was bet…  ***cough***  Was bett…  ****wheeze***  Was bette… ***hack, cough***  Was equally as good as my idea, and I went with his instead. 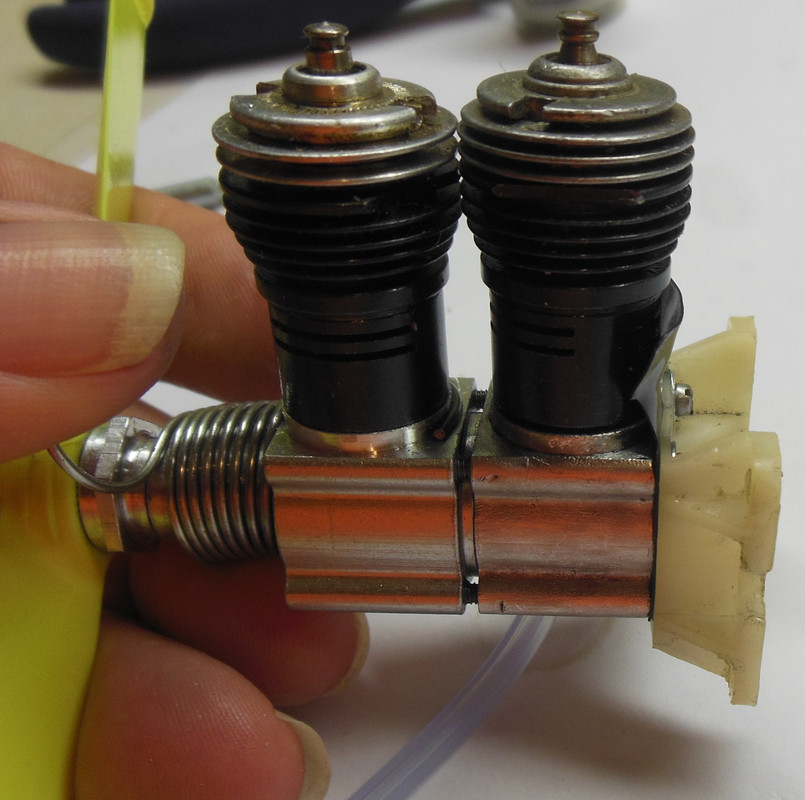 Way to improvise Mark and another Good helping idea from roddie !! Have you ran it since the upgrade ? The weight came in good .

I think this is the most elegant ”faux twin” that I have seen. Would look really good on a sport scale biplane or a model of one of those old small aircraft that had an inline twin.

Now that the ”rear face” of the engine block is flat, it would be possible to make a radial mounting plate using maybe 1/8” aluminium. Countersink the screws on the back, and drill mounting holes maybe in a tanked bee or horseshoe pattern. Would make it a little bit more robust, considering the extra weight and moment compared to a standard 290 engine, and the possible brittleness of the Goldberg mount

Anyway, just wanted to let you know that I am quite impressed by the ingenuity involved, and even though there were not many greenies, I am sure I am not the only one

Just a reminder of the "original concept" picture I posted which prompted Mark's build. 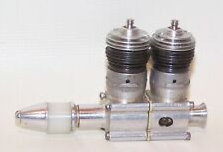 I also found another.  This time we can try to figure out the tank/intake arrangement.  Interesting to note it has the exhaust shield on the rear cyulinder as Roddie suggested. 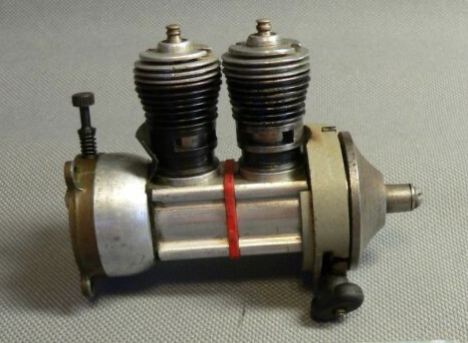 Okay.  I finally got around to building a plane for this.  No name for the plane yet.  But I also wanted to try making a flapped sheet wing plane, so this is two first flights in one.  The balloon tank is a 9” party balloon.  It’s filled up about half full.  That got a 9 minute and 45 second run.  On the way home I stopped at WalMart and got a bag of 7” balloons, and that’s only because they didn’t have 5” party balloons…  Ah, well.  They’re only 99 cents for the bag of 30 balloons.  I can always use the 9” balloons for the Medallion .15 on my SIG Acromaster.

I also found another.  This time we can try to figure out the tank/intake arrangement.  Interesting to note it has the exhaust shield on the rear cyulinder as Roddie suggested 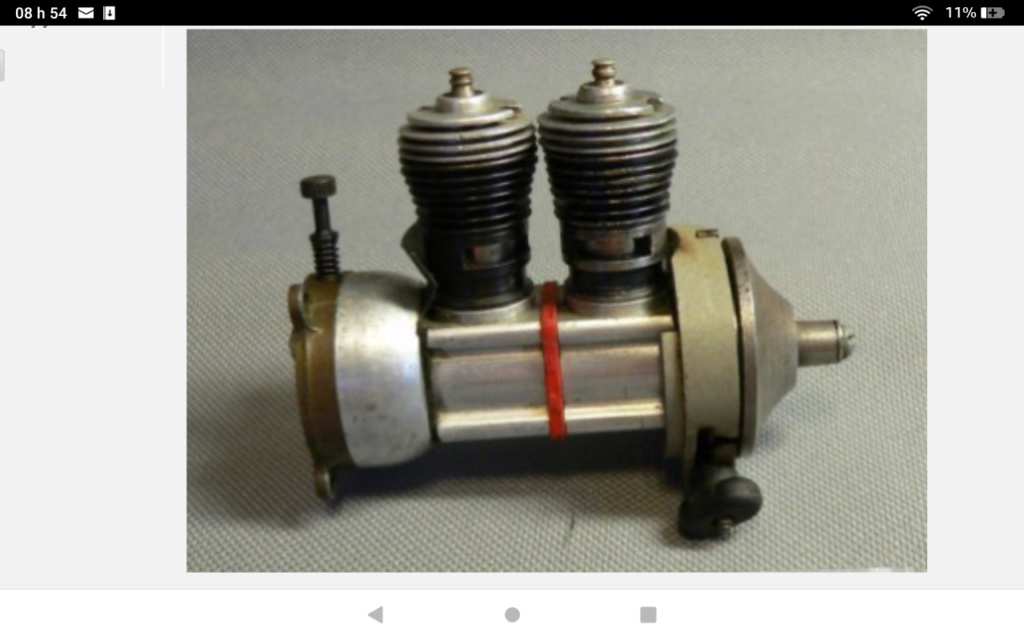 custom made crankchaft adaptor?? And if the motor really works it must have a lot of torque

Maybe that would be one of my future projects. I could use a leaking crankcase to modify in the rear I have already thought about how to couple two motors but certain technical difficulties are present.