Lions, Tigers, and Bears may scare some people but for me it's snakes.

My first encounter with one came as an early teenager while climbing a near vertical rockface in New Hampshire's "rattle snake" mountain.  Lifting myself up to a ledge I came nose to nose with a large snake of unknown variety resting there.  I didn't stay long enough to find out what kind it was quickly finding another route up to the top.  A few years later I came across a nest of harmless garter snakes at our cottage on Onway Lake and found them curious and entertaining to watch.

Fast forward fifty years to Florida without ever finding another.  While mowing the lawn I saw a small maybe 16 inch long snake with a fat body and a rattle on it's tail.  Got a hoe and separated it"s head from it's body, then another, and another.  Later I found out they were Pygmy (Pigmy) rattlesnakes. A couple of years later while walking in the back yard I saw a huge Eastern Diamondback, beautiful thing, 6' plus and a body as large as a man's arm.

Thought about it, two small dogs that run the yard and Diamondback's can be territorial. Went in the house and retrieved my 60 year old Remington .22 that I have had since a kid.  The snake had moved down toward the pond behind our house.  Got to admit my 70 year old nerves were not what they were in my teen years.  About 30 feet away I got off a shot and missed.  Well I'll go for the body I thought, hit it twice but my rifle jammed and the snake turned around heading straight for me.  With the snake about 10 feet away I got the rifle cleared and took half it's head off.

Just then a couple of guys that were putting in a fish pond for us arrived.  With the snake dead but still moving they marveled at it's size.  I ran in the house and got the movie camera.  Came out and one of them was reaching to hold the snake up for the camera, when it moved.  His reaction was shear terror caught on film.

If your feeling badly for the snake, welcome to the club.  Me too.  I regret it to this day, what a magnificent beautiful creature and the last living creature that I have taken.  Shortly thereafter I replaced the sear in that .22 and haven't had a problem with it since.

Edit add: Whoops, just remembered, I did dispatch a Copperhead in my backyard here in West Virginia. Another dog concern, old half blind at the time Spike.

Which brings me to this:

Latest issue of Smithsonian Magazine and thought of Rod's Australia with five of the worlds most deadliest.

Watch where you step Rod. 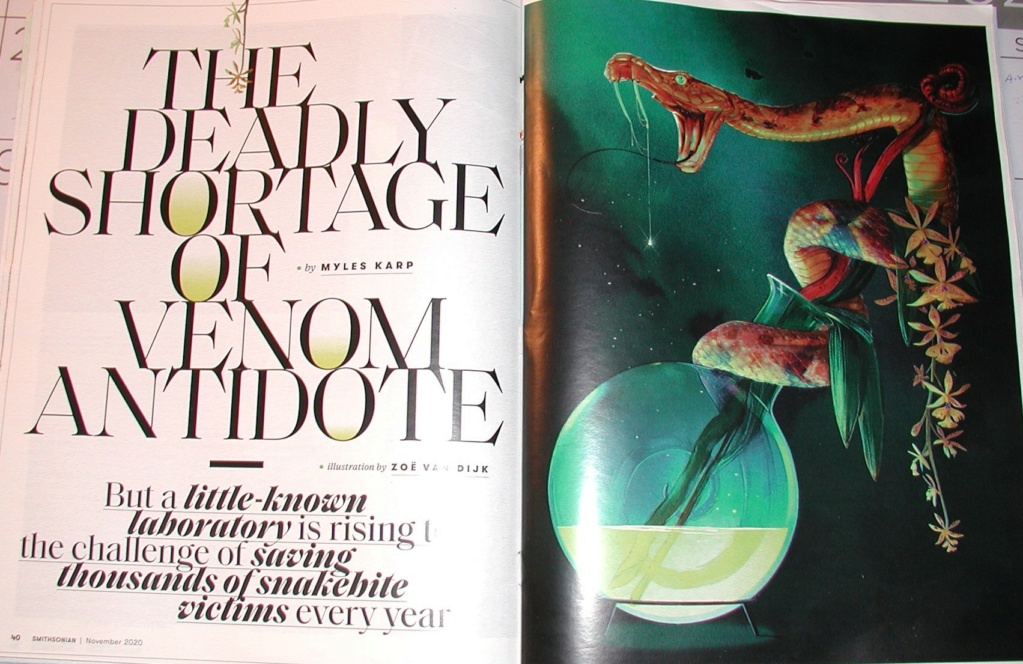 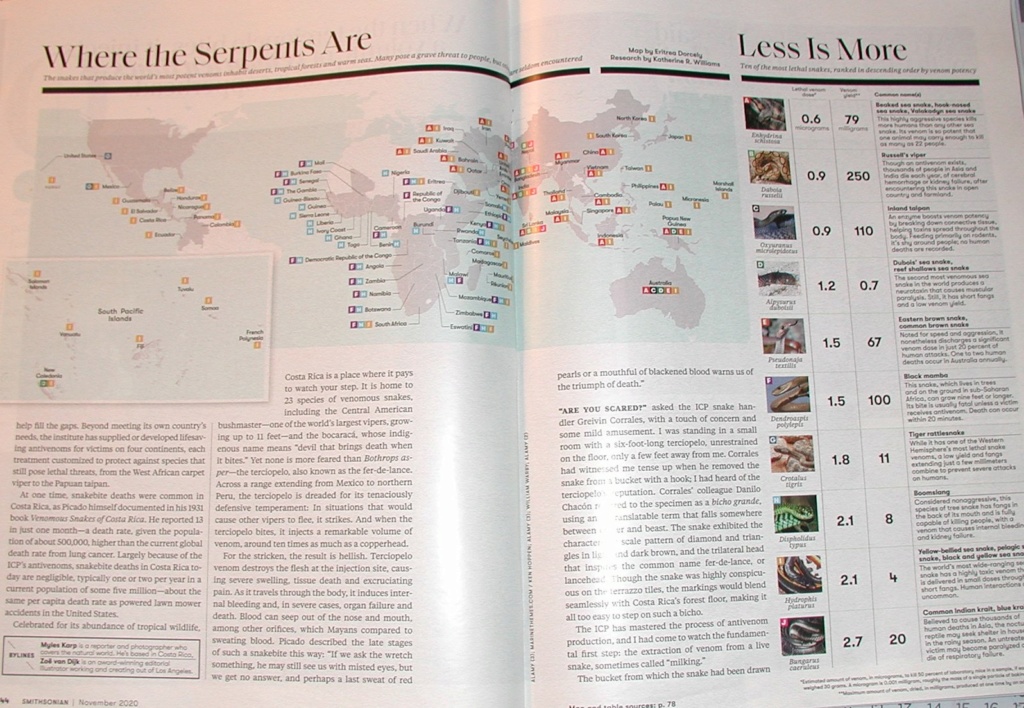 Bob, I'm a carpenter and I was renovating a very old historical barn in the mid 90's. We had to connect the barn to the carriage house which was currently lived in on the property. The structures dated back to 1690's. The owners son had a python in the late 70's. They came home one evening to discover the python escaped the cage it was in. Well, I'm in the attic of the carriage house with a tin knocker making provisions for the new air handler unit and I moved insulation out of the way and guess what I found. I'm a snake lover but not that day. I almost fell off of the joists and through the ceiling of the unfinished area when I saw that. It was every bit of 4" in diameter and coiled up. It's head was extremely large and at first I was not certain what I was looking at. I studied it close and noted it breathing and witnessed it's tongue a few times reassuring me it was alive. It wasn't afraid of me or it didn't show it. It remained coiled. We informed the home owner who was also extremely surprised but knew of it's origins and told us. He sent for a exterminator who came to remove the python. Once outside, we stretched it out to almost 8'.

rsv1cox wrote:
Latest issue of Smithsonian Magazine and thought of Rod's Australia with five of the worlds most deadliest.

Watch where you step Rod.

Oh, don't you worry Bob.  I'm well aware of that

Growing up on the farm, we had a number of encounters, not the least of which was loading up a freshly baled crop of small square hay bales only to find a Tiger Snake head wriggling out of one side of a bale and the tail wriggling out of the other.
There are no harmless snakes in these parts.  Everything's pretty much deadly, agressive and to be avoided at all costs.  More tropical areas up north have non-venomous stuff like pythons etc.  My dad had the attitude that "the only good snake's a dead snake".  These days, killing them is frowned upon.  They say you should "relocate" them if they bother you.  Around our farm, that meant relocating the head from the body

"Snakes and Tornadoes"...two subjects that created instant terror on either side of my family.  So, it was only proper that I'd grow up fascinated by both.

If a snake was found on dry land, it was a "Copperhead"---If it was near water, it was a "Water Moccasin"---with a few exceptions, that was pretty much the extent of snake identification when I was a kid.

One of the few variations on the theme was when my Grandpop killed a "Spread'n Adder"...which I came to know as a Hognose Snake...that "attacked him" as he chopped it up with a hoe.  I was told terrifying stories of water moccasins "standing on the tip of their tails" and coming at someone at a human's running speed, but came to know these snakes as big, lazy predators who'd just as soon lay on the bank and wait for they prey to come to them.  A dangerous bite for sure for those not watching their step, but they'd always take a retreat if offered.

The Grand Prize came from my Grandma on my dad's side:  "The Hoop Snake" could grab it's tail in it's mouth, form a circle, then stand on edge and roll toward you faster than you could ever run.  It'd bite you as it zipped by, and there was no treatment.

This story, along with "The Joint Snake" (not a hippy's pipe dream) that could reassemble itself if you didn't scatter it's chopped-up parts, was totally bought by me as a five-year-old.  As I grew up, I gradually came around to the fact that "country people" often know little to nothing about the country they live in.

Added to that was the apparent acceptance that getting drunk and smashing your car and yourself and maybe spending the night in the lock-up was really just something to be accepted as life experience that fit right into the theme that, "Poor folks ain't got no chance".  This strange logic bothered me as a kid, but I'd learned early-on not to question the intelligence of the adults around me.

My poor mom was treated to all manner of creatures brought home from the creek, but we all survived, with the acceptance of my sister who killed herself following our long family tradition of drinking and driving.

I don't bring these creatures into my home any more, but enjoy the occasional encounter in the yard or woods...such as this little guy who very nearly became lawnmower fodder. 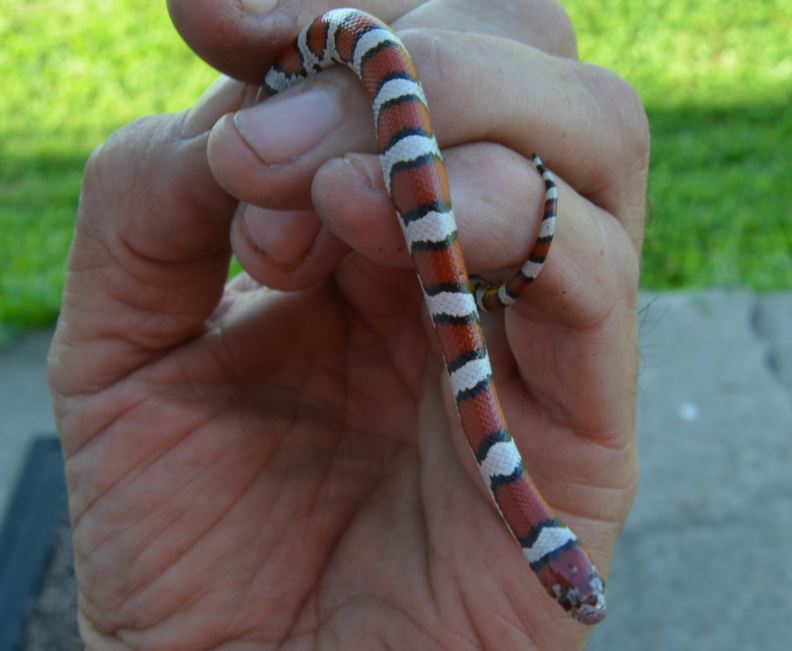 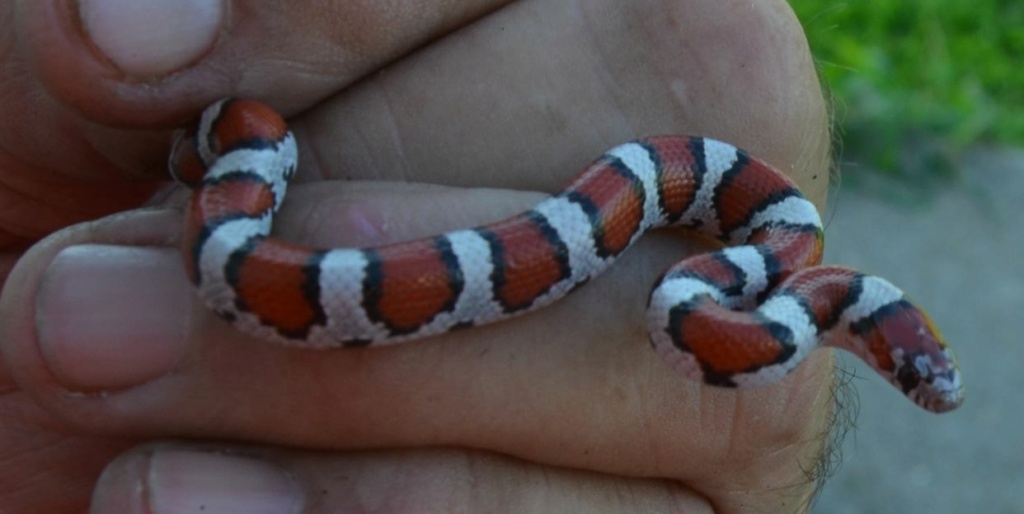 Looks like a Scarlet snake Kim. Red touch yellow kill a fellow, red touch black friend to Jack. Had one run across my foot in Florida while pulling up a rope someone had buried in my back yard. Coral snake look alike. One of the deadliest, but they don't have fangs, rather they have to chew their venom into you. We had Black Racers and Corn snakes there too, left them alone.

Last snake here, about a month ago while mowing the lawn, black snake about three feet long, little fella. I like them to be around as they keep the field mouse population down.

Also in that Smithsonian article, 50,000 people in India are killed each year by snake bites.

My condolences for the loss of your sister, Kim.

I thought the scale pattern on the scarlet snake's head, which looks like a cartoon face was interesting.

When I was on Okinawa 15 years ago, in the various shops were selling bottles and jars of Habu Sake (rice whiskey). Each vessel of sake contains a Habu. 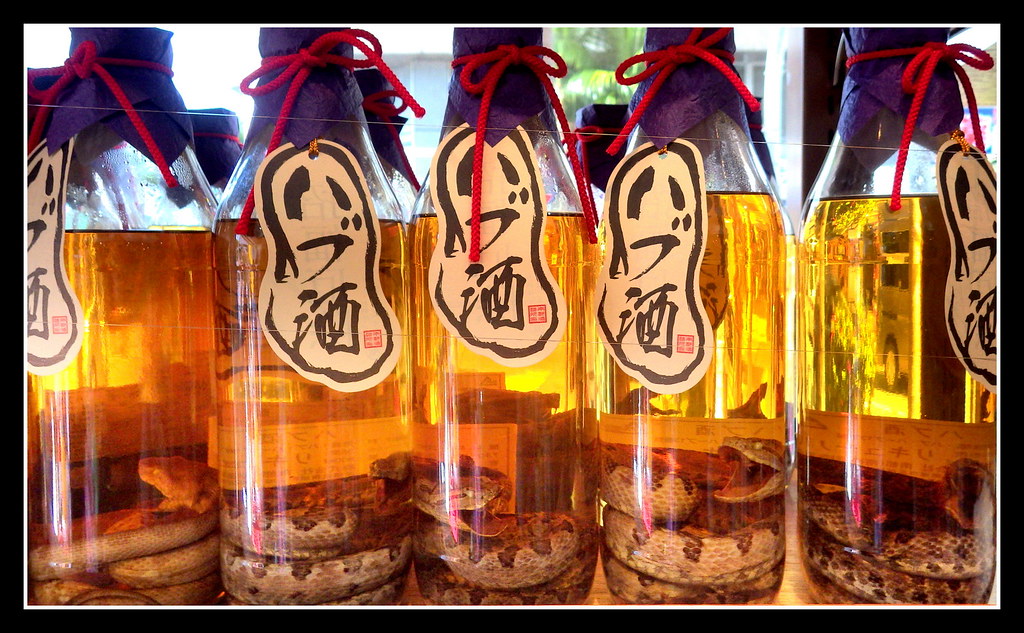 The Habu is a pit viper in the family of the rattle snake, very poisonous, a few get bit every year, require anti-venom and prompt treatment. There is a tradition attached to these, but personally I think it more a tourism marketing scheme to buy their sake. I never bothered to purchase (kind of expensive) although many servicemen and those serving on the military bases buy them as souvenirs.

Here in Clovis I have only seen bull snakes and garter snakes, although some years ago a farmer's wife nearby got bit by a rattler.

I met a rattler at the base of a tall palm tree, in Palm Canyon Gorge California.
We both avoided each other.
I used to catch garter snakes many years ago. Played with them, and let 'em go.
Friendly animals. Kudos to KIm, nice pics of the baby king.
At college in south Georgia, I was introduced to the term, "she's got snakes in
her head", meaning she thinks too much. Still can't get a grip on that one.
Bob

dckrsn wrote:I met a rattler at the base of a tall palm tree, in Palm Canyon Gorge California.
We both avoided each other.
I used to catch garter snakes many years ago. Played with them, and let 'em go.
Friendly animals. Kudos to KIm, nice pics of the baby king.
At college in south Georgia, I was introduced to the term, "she's got snakes in
her head", meaning she thinks too much. Still can't get a grip on that one.
Bob

Maybe "Bats in the Belfry" too Bob.