There's a lot to take-in on Facebook. Lynne and I have had profiles for at least a decade now. There's a lot to not like.. on Facebook.. but if you're good at metering what gets your attention.. and what to dismiss.. you'll have better experiences there. Aside from individual people's profiles (living or memorial), there are special-interest groups.

I previously had Facebook-access on my home computer only. More recently I needed a mobile-phone upgrade and it has the Facebook application installed. I've found myself logging-in much more often.. but have also been receiving suggestions for several model- building/model IC engine.. (you name the category..) pages that you can check out. Some are "open" groups.. and others are "closed".. but there seem to be more and more lately.

I see a lot of continued interest in model IC engines of all types and displacements.. and some clubs that are keeping the torches lit in their use. That's really good for us here in this community. People sharing ideas.. and sources for related-items that could be difficult to find via conventional search queries.

I don't subscribe to (or join) many of these groups.. (although I'd like to..) it's nice to know that they're there.

I am not an active FB user but see some of us from CEF on e.g.  Cox Model Engines Owners Club and Cox Engine Fans..I believe CEF is far more advanced as a COX relared site and the breadth of COX topics than any other  site I bumped into...and yes it is good to know that IC model engines, COX in particular, still enjoy global interest even though mainly in the "more mature" age groups.

Yup... there too! I frequent the marque sites, like the closed Guillow's, Cox Engines, Sterling, Comet and Balsa Builders groups. More as a lurker on them, but occasionally drop in on the Guillow's group.

What I don't like about FB is (besides the trolling) is the lack of historical reference. That is, what I read or post today on FB won't be nearly as easy to research /find later. So if I find something worth hanging onto, it isn't simply create a favorite to get back to it. I wind up saving the content into a Word document or printing the page as a PDF. It is just too dynamic an environment for me.

I have a FB page, but rarely use it. And I only have a few friends. I just don't see it as very useful. I like the CEF and Stunthangar because they are actually forums. Facebook was never designed to be a site to disseminate information. It was designed to be a social media forum where information turns over fast, and you're not really meant to deep dive into information. Sure, there are files tabs and video tabs and picture tabs. But it's not an information sharing platform. Information being data that is easily referenced by topic and source. FB is an opinion site. No matter what they want to call it, it's formatted as an opinion site for people to let other people know what they are thinking/doing on their cell phones/tablets. In my opinion, it will never be a shadow on a real forum.

Yep, I am a FB user here. Mostly for a little chuckle here and there. As well, their 'Messenger' app is nice to use for contact as it is quick and easy. I am FB friends with a couple members here.

NEW222 wrote:Yep, I am a FB user here. Mostly for a little chuckle here and there. As well, their 'Messenger' app is nice to use for contact as it is quick and easy. I am FB friends with a couple members here.

Yes.. pretty much how I use it these days. There are some pages that "hit home" with me.. regarding C/L activities in the NE of USA. That would be the Philly Flyers page.

Roddie, I'm pushing several members to up the ante on getting more items on the Philly Fliers page. Rich who created the page is a very good friend of mine. Rich is a bit upset with me due to me not being a Facebook member. I can't contribute to questions and additional pictures. Our club is dwindling not too mention that is has become quite divided. During the week, members attend a r/c club to fly both r/c and control line while the other half is out working due to not being retired. The major impact took place last November when we lost a very important flying site which we had for 30 years. Fortunately, some of us joined another club in New Jersey. It's a bit further but due to it's location allows for other options like free flight and unmuffled engines. Phones have become the link that ties us all together and we submit pictures to Rich when we can. Rich is always looking for things to put on the page. Myself and a few others are not so computer literate therefore capturing videos are not usually taking place. This needs to be done on a regular basis because we fly stuff that many have never seen let alone seeing it flying.

facebook,do you-have a profile there

Roddie, I have no use for face book and don't belong. The west coast guys, "The Flying lines" have an awesome site on u-control, just so much information there. I'm sure you've been there, just checking, take care. Eddy

944_Jim wrote:Yup... there too! I frequent the marque sites, like the closed Guillow's, Cox Engines, Sterling, Comet and Balsa Builders groups. More as a lurker on them, but occasionally drop in on the Guillow's group.

944_Jim wrote:What I don't like about FB is (besides the trolling) is the lack of historical reference. That is, what I read or post today on FB won't be nearly as easy to research /find later.

It is not good for historical content as you say. There's also way to much off-topic nonsense that clutters and bury genuine content. I have no qualms about someone sometimes coming back with a humorous punchline. We all need that. It is the open ended questions and the voluminous amount of replies by the some million plus members of these groups that renders them hard to follow.

I also don't like the ads, fake solicitations (scantily cladded way-too-young-for-me female characters friending - could be a dude posturing as a woman

, fake accounts posting as friends, and the agenda trolls

) Then add the FB political agenda nonsense, censorship, suggested stuff they want me to see but I have no interest in, control over what posts I am allowed to see (I have friends who post but never see them except when I directly search for them), etc. I've considered to cancel my account.

Thank you for your replies. Good to know how people feel. The "forums" are our home-base(es). I enjoy hearing about people (just like me.. just like you) sharing their experiences.. especially if documented with photos.

I have a Facebook account and am a member in Cox Engines owner club (or something) and the Cox buy-sell-trade. In addition to those, I also have joined some Finnish groups like aviation history and a couple of Hi-Fi and Harley related groups. I agree with George and others on the lack of history and being able to search older comments, and very much prefer real forums.

I am in a slow progress of decluttering (life, things, distractions), my Facebook account would be a good thing to declutter too. Could just unsubscribe all the hobby groups. The local freecycle and flea market groups are useful for getting rid of excessive stuff, and the local ”bush radio” or ”jungle drum” group keeps me informed of what’s going on in our little town. There is also a group for old photos and local history, and another group that informs about the progress of a highway project that is going on near my house, about 7 miles of 4-lane hwy with 11 bridges. So there is a lot of useful info among the useless trolls and spam, it is just a matter of finding the good stuff and eliminating the bad.

I only have relatives and ”real-life” friends and some closer colleagues or ex-colleagues as FB friends so that keeps the news feed clean. But I have had to reject/ignore some friend requests due to my strict policy

Yeah, there's all kinds of crap that flows back and forth on FB, but my use is typically centered around the pursuits of the moment, and gives me a handy way to post photo albums and the occasional rattle-on story.

I use the messaging feature to shoot notes out in place of (many times) Email through Yahoo.

Interestingly, the only "real" problems I've had involved members of my own family who thought they were immune from being blocked because they were blood relatives...funny people.

Hey Roddie! Yes, I have a FB account, and use it quite regularly. After the Yahoo! Groups shut down Mark B moved the “049 collectors “ to Facebook, split into two pages, the “collectors “ and the “Buy-sell” group. I think I just saw a welcome to two new members from this group to the “collectors “ page. I also frequent some other groups like the Balsa Builders, vintage kit builders, Cox Engine Owners, Diesel engine collectors to name a few. Most groups are monitored by Admins who have NO problem deleting posts or members who don’t follow a few simple rules. Like No Spam, no political or politics. Yeah, like Kim said you may have to block a few family or friends to keep your news feed from filling up with garbage or off base rants! Other than that, it is entertaining! Don’t want to give myself too much competition but “marketplace” along with Craigslist has been a great source of hobby purchasing at well below Ebay prices!

lol, opps, sorry i'm slow to reply...i was on facebook.

Kim wrote:Yeah, there's all kinds of crap that flows back and forth on FB,..

... Interestingly, the only "real" problems I've had involved members of my own family who thought they were immune from being blocked because they were blood relatives...funny people.

Double whammy for me Mark, I don't do facebook and won't sign up for yahoo. Too bad for me as I miss your comments and expertise'.

I seriously don't know how people keep up with all the internet has to offer and the forums associated with the hobby. I only do two forums, CEF and the model train forum. Any more to follow and I wouldn't get any useful work done.

Remember this? You were the only one that knew what it was and could fill me in on the details. 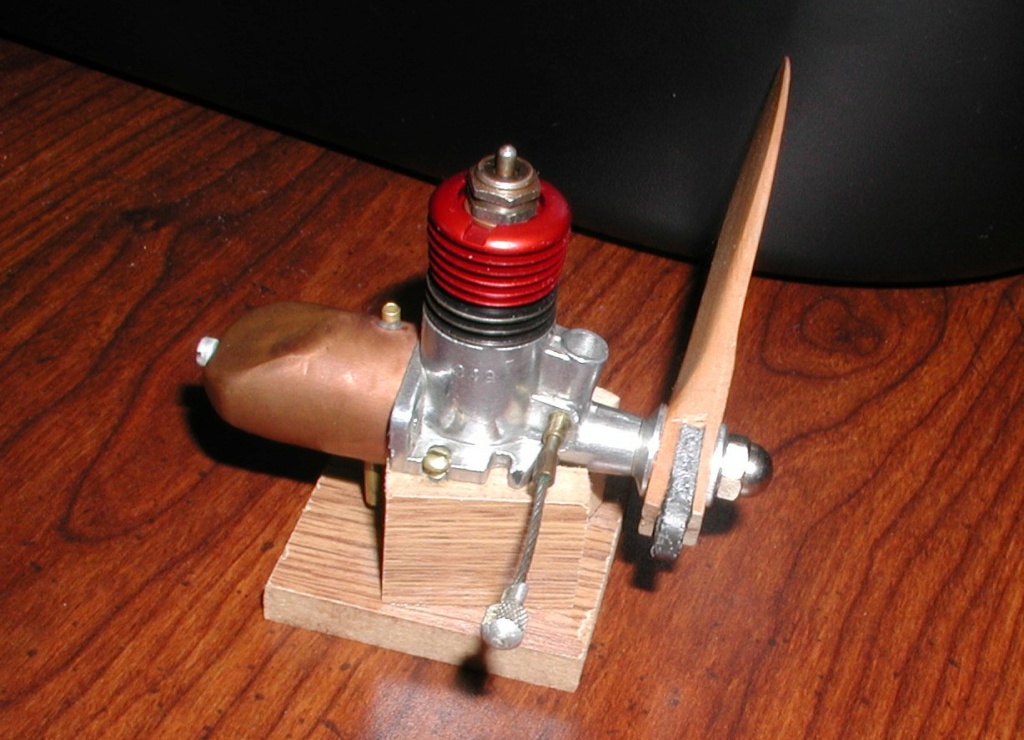