» RC Trainer Question
by MauricioB Today at 11:19 am

I have read somewhere, probably on here, than methalated spirit is the fluid to clean a model engine.

Is 3 in 1 a mineral oil ? Which I think it is, but, does mineral oil "poison" the glow plug filament, platinum ?

3 in 1 oil is the worst thing to use next to WD-40. Not only do they seize the engine during storage, they won't burn off effectively. when you go to start it, it will be very problematic until it clears. Marvel makes a good air tool oil , not Marvel Mystery oil. Any quality air tool oil will suffice. Trans fluid also works well but it's thick and it can be thinned down if needed but the newer synthetics have worked just fine for me in my ball bearing engines. Generally speaking, Cox engines run on the proper fuel mix really doesn't require after run oil. Just insure that you have all raw fuel from the engine.

Everyone here knows that I'm an advocate for RemOil. My after run/storage procedure is always the same, spray liberally the cylinder and crankcase with it, flip it over, and blow out completely with compressed air. Flip over some more. For long term storage i will also put a few drops of after run oil in the exhaust ports. After having a very negative experience with WD-40 some 50 years ago I have used this procedure ever since with zero recovery problems.

Denatured alcohol is better than reg. 91% but not worth the extra $$ I use simple green thinned down say 1/2/ with water , i do have a agitator that heats up too that i like but didn't always have . Hobbies #9 is good for cleaning brass and getting the tough stuff off , But dont leave in too long 10-15 mins. max with full strength , tooth brushes , Qtips . Hope this helps since the storeing has been covered .

has anyone used Ballistoil (kinda like rem gun oil)

Ken Cook wrote:Generally speaking, Cox engines run on the proper fuel mix really doesn't require after run oil. Just insure that you have all raw fuel from the engine.

Fully agree with Ken here, I always clean my engines after using them, but I dont use after run oil, I wipe the outside of the engine down and make it nice and clean again by using a rag, and then I always take the cylinder and head off and give them and the piton a bit of a check, look for any score marks etc. that might be the indicators of something not right, check the conrod play by hand for big end and small end play, check the crank by hand for end play, look for any dirt or bits of grass that might have been sucked into the system and if I find them in this area, then I clean my grey choke style backplate thoroughly, check the needle for wear, grooves, bent, dirty etc, check the spray bar is clean, check the reed, this all simply costs me one crankcase gasket. You could probably in many cases re-ue the crankcase gasket but I just use a new one as it makes me feel better, as the hassle of air leaking is not worth skimping on the crank case gasket. I take the prop off, clean and check it, give my glow plug a check, and then I re-assemble partially. I put the Cylinder and glow head on loosely and leave the prop off or with the spinner loose. Then I wrap in a nice clean rag. There is enough oil from the 20% castor I use to protect the insides of the engine and keeping it loosely assembled helps prevent things becoming hard to get apart. This routine doesnt even take half an hour and works well for me.

Prior to going flying it takes me about 10 minutes to give the engine a once over again, I know I have left everything loose, so its very easy to quickly check everything. I start at the spinner and progressively work to the back of the engine correctly tightening everything and giving it a quick once over. This helps me a LOT with getting to the field, fueling up, and my engine runs straight up and as I expect. If I am going to store an engine for a period long enough that im concerned it might tighten up from storage, I disassemble it and just store it as parts very very lightly oiled with auto trans fluid. I dont buy, use and run collector style engines which may make a difference to people and storage concerns. All of my engines are made up of parts I select and suit my need that I buy from Bernie and Matt and I assemble, test, run, clean, maintain, as I need.

I have found this process works exceptionally well for me and provides great reliability with engines running really well as expected when I get to the field. It is a discipline I was taught to use and apply to Yamaha TZ Grand Prix race bikes and engines by some members the Yamaha Grand Prix Factory team in the 80s and I have found it is a discipline that has served me very well across many types of two stroke motors. Obviously I dont pull my boat outboard motor and lawnmower apart every use

but for high performance engines like the Cox engines it is an easy discipline to apply.

Maybe I am a bit crazy

but there are very few things in my life where I apply an level of discipline like this. HaHaHa.

Prior to going flying it takes me about 10 minutes to give the engine a once over again, I know I have left everything loose, so its very easy to quickly check everything

I do the same. After rebuilding or cleaning an engine I leave the case machine screws slightly loose, but it has come back to bite me a few times. More than once after mounting an engine on a test stand or airplane and fueling it I discover the inevitable leak.

............ I have seen to many back plates caved around the screw heads from people over-tightening the screws.

I've ridden up on Skyline Drive with him once or twice, its hilarous fun to see a full wakka race bike on the road.
He admits its rare to ride, and MUST early morning, clear roads. any traffic hold up or need tto 'idle' , and its fierce prone to overheating.

i could keep up in the tight technical parts (on my SuMoto) but open road and its a puff of castor oil and bye bye!!
ring a ding ding ding

rsv1cox wrote:Everyone here knows that I'm an advocate for RemOil.  My after run/storage procedure is always the same, spray liberally the cylinder and crankcase with it, flip it over, and blow out completely with compressed air.  Flip over some more.  For long term storage i will also put a few drops of after run oil in the exhaust ports.  After having a very negative experience with WD-40 some 50 years ago I have used this procedure ever since with zero recovery problems.

BOB, you’re not alone in your advocacy of “RemOil” and it’s magical mystical properties.
Found this picture on the “Glow Nation” Facebook blog: 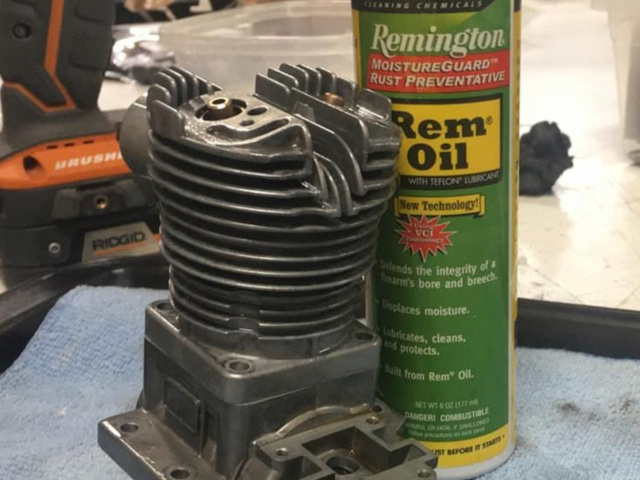 Coxfledgling wrote:I have read somewhere, probably on here, than methalated spirit is the fluid to clean a model engine.

Is 3 in 1 a mineral oil ? Which I think it is, but, does mineral oil "poison" the glow plug filament, platinum ?

I found Acetone is a good cleaner for nitro motors, welded and glued plastic fuel tanks, metal fuel tanks, Dubro and others nitro silicone fuel lines. Have used it for years for flushing and cleaning without issue. It strips all the nitro and methanol and castor oil away. Be aware!!, it is also used as a debonder for superglue and can soften hardened epoxys and paints. This would strictly be a "engine removed from the model" cleaning solution for a new user. Some of the vintage plastic model fuel tanks were glued/epoxied together, or glued right into the formed body of the model. If you do use it on these, make sure to rinse fast and dry it fast. I would be hesitant to let it sit filled overnight in one of those vintage tanks. If your just looking to wipe the motor down after running it on the bench or on your model, you can still use acetone,,but remember the points I stated above. Test inconspicuously if you can. If you cant or don't want to,,then don't use it. Simple.

Some might be familiar with the product called Goof Off,,basically acetone in a spendy'r can.

DON'T use the 3 in 1 oil. Save that for the squeaky house door hinges.

In a pinch you can use Outboard 2 stroke mix oil as a after run,,but read the label first. This stuff could contaminate the glow plug.

This is what I use.
https://coxengines.ca/coxlube-after-run-oil.html

Novarossi Micromotor Italia marketed there own afterrun and engine assembly oil of which I have used. An EXTREMELY light weight oil,,lighter than the thinnest turbine mineral oil. Almost water. Safe for engines and glow plugs as per Novarossi. Some of there engines run up to 20% oil in the mix, like the small cube flight stuff.

You do want to put some choice of after-run in after a day of flying or even bench running. If it sits wet with fuel, the methanol properties can start to etch the metal surfaces in about 5-7 days or sooner,, depending on where you live.

The fuel of choice is important. You want a clear to slightly amber color to your fuel. The bright colored fuels USUALLY all have a color dyeing agent in the fuel or oil to make it easier for the first time and long time user to see the fuel level(my take). These dying agents will attach to your glow plug element and make it run hotter that advertised. To that end ,I mix my own fuels now. If I had to buy fuel again for this kind of stuff,, it would be Sig Champion 25% 1/2A. It's a proven mix that has won Championships.