» My mobile phone went in the toilet
by crankbndr Today at 6:46 pm

» Pearl Harbor, the event and the movie
by rsv1cox Today at 6:14 pm

» music vids.. some of your favorites
by germanbuddy Today at 7:35 am

» When a cylinder now costs more that the engine did last year
by Cribbs74 Yesterday at 1:15 pm

Does anyone know if Sig castor has detergents in it? I have an OS .20 (Max), I have been usin' my home brew zero nitro fuel (22% Sig castor.) This engine has 1.5 hours on it so far since fresh outae the box. The piston is still as shiny as it was when new. Most iron piston engines I have , the piston went brown with this much run time, this one tae no avail....Any thoughts?

@Scotland421 wrote:Does anyone know if Sig castor has detergents in it? I have an OS .20 (Max), I have been usin' my home brew zero nitro fuel (22% Sig castor.) This engine has 1.5 hours on it so far since fresh outae the box. The piston is still as shiny as it was when new. Most iron piston engines I have , the piston went brown with this much run time, this one tae no avail....Any thoughts?

Yeah, my though is Sig castor is exactly that: castor. I do not believe they would need to put anything else in it. You may want to add some Klotz as an additive for additional lube protection, but I don’t recall OS requiring it.

You didn’t say what %Nitro your homebrew consisted of. OS doesn’t require a very high nitro content with out proper run in. Your running enough castor oil per these instructions. 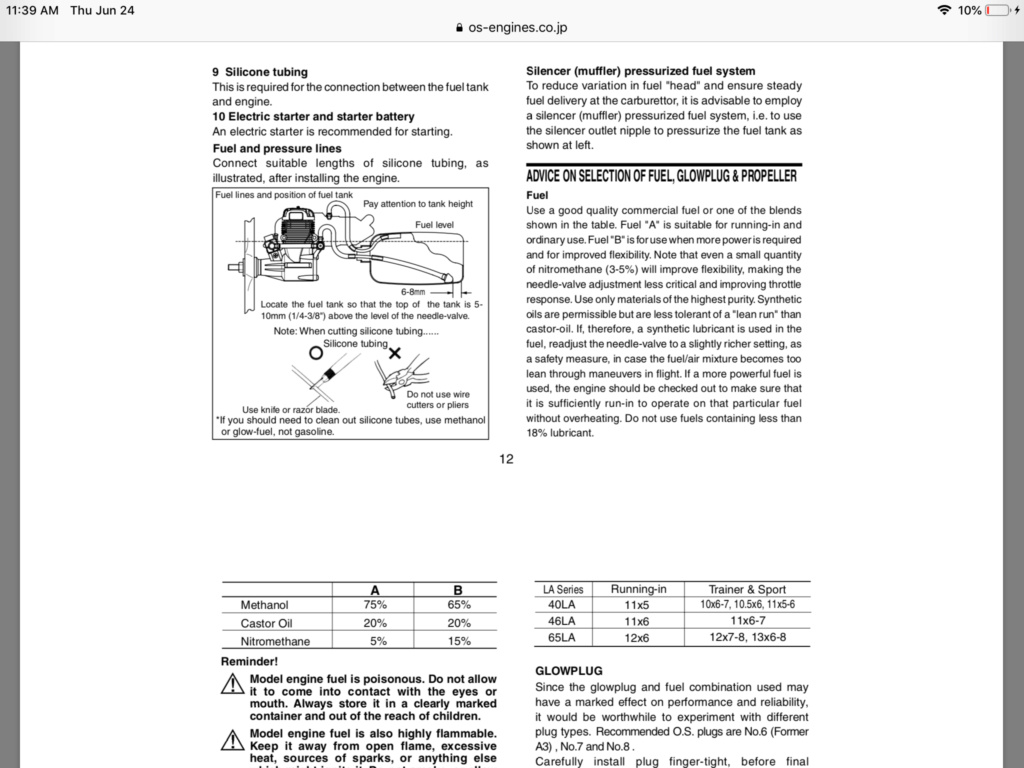 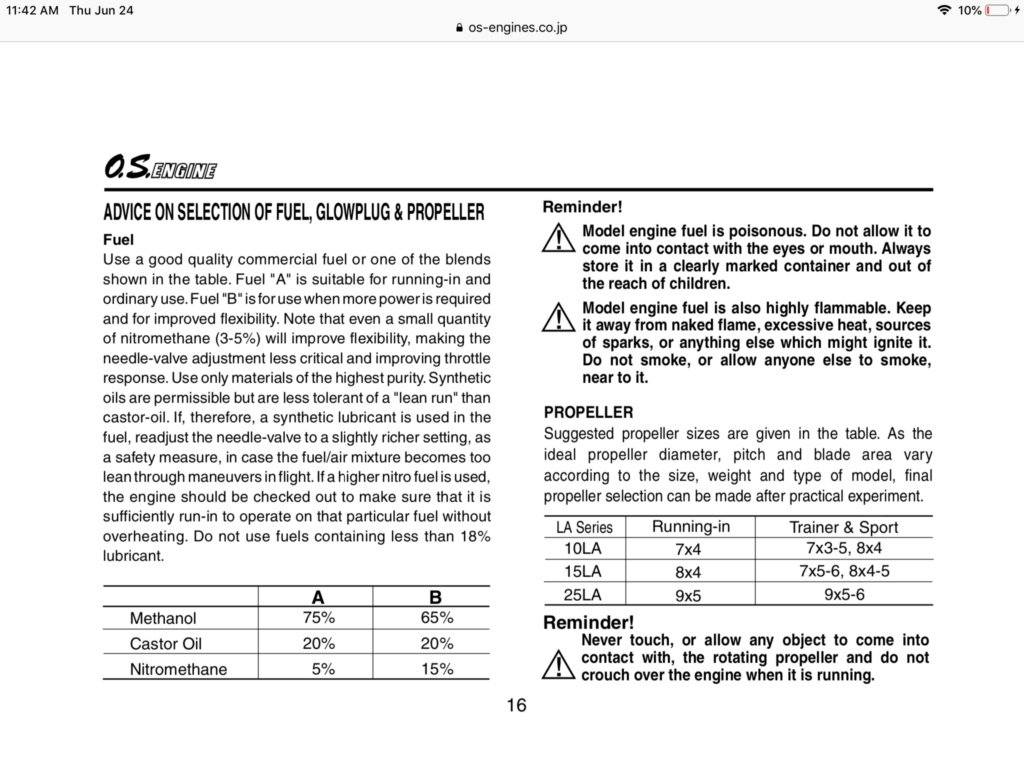 @Scotland421 wrote:Does anyone know if Sig castor has detergents in it? I have an OS .20 (Max), I have been usin' my home brew zero nitro (22% Sig castor.) This engine has 1.5 hours on it so far since fresh outae the box. The piston is still as shiny as it was when new. Most iron piston engines I have , the piston went brown with this much run time, this one tae no avail....Any thoughts?

The instructions ye show are fae the LA series engine (aluminum piston in a nickel plated brass liner), Mine is an OS Max .20 frae 1969 (iron piston)


Sometimes I just don’t comprehend what I have just read....skipped right over the “zero nitro”.!
Couldn’t find any manuals in the discontinued engines on the 20 max on the OS web pages, but peter chinn did a nice test write-up on the sceptre website.

That’s all the free information I have for today...

I have the manual, it was a new in box engine I've had fae 45 years

Sig castor oil is listed as Bakers grade AA which means it's the first press when produced. The oil is also lighter in color compared to most castor oils. If you were using other types of castor oil prior, they may not be as refined, thus the brownish carbon deposits you have noted. Using Sig, you will also achieve that same patina eventually.

Years ago, Klotz told me they supply Sig castor. It would be no surprise if was not neat castor.

I have read this post a little but I don't think I read that resin seed is a very potent poison and therefore using pharmaceuticals may seem safer. I believe the extracted oil is safe for the most part But good me as long as it lubricates properly

I have used Penrite 10 tenths race Castor and found it very good. From their marketing Blurb "Penrite 10 Tenths Race Castor is an ashless SAE 20W-40 engine oil manufactured from high quality castor vegetable oil, synthetic ester, anti-corrosion additives and an advanced anti-oxidant. The synthetic base fluids are specially blended to produce SAE 30 and SAE 40 classifications. This helps to reduce or eliminate traditional problems such as lacquers and deposits. 10 Tenths Race Castor has retained all of the advantages of a castor-based product, including a naturally higher and stronger film strength, very high load carrying capacity, better wetting properties and reduced power loss due to friction. 10 Tenths Race Castor is also recommended for classic two and four stroke engines where the owner wishes to use a Castor based oil rather than mineral based oil. It is also suitable for use where monograde SAE 30 Castor based products are used or recommended. This product may also be used as a premix in two stroke applications with both petrol & methanol fuels.   I used it for quite some time and have no problem with it. My personal preference is pure castor and fortunately I can purchase that from a local race supplier.  If you have Drag racing nearby anywhere you will find Nitro supplier somewhere. If you have speedway motorbikes (short track) nearby their fuel supplier should have pure castor. The main reason I use pure castor is because when my engine runs lean at the end of a flight, the castor is still there working. The real synthetics are gone at ignition, and some people believe castor helps get heat out of the engine as it transports heat away as it is exhausted.

Some of the castor oils available over the net and ebay need their fine print read before you buy as some dont mix so well with methanol and nitro. Example: https://www.mxstore.com.au/p/Maxima-1.89L-Castor-927-2-Stroke-Racing-Oil/M9272?gclid=EAIaIQobChMIpdiG1ObU8gIVDCUrCh2KpQVpEAMYAiAAEgKwHPD_BwE  read down the page to the bit that says Caution:..................  Seems like there are a lot of Castor based oils available for Kart racing also, but they all seem to have additives.  Many people think they are better with the additives. Im not sure with my Cox engines. I know the Penrite 10 tenths Castor worked extremely well for me. But pure Castor is my preference and I am fortunate i am able to buy it locally by 5Lt container. I looked on ebay and couldnt readily see any pure Castor in decent qty and price.

Good luck with your search and efforts to blend your won fuel if possible. I tried running zero nitro some time ago, but gave up as I couldnt get it working well, that said. I have learnt a lot more since then and will give it a try again.

I have used Klotz BeNol for a long time with no seeming ill effects.

Yabby. I've looked at the Penrite product and thought it would be a good thing. Our overseas friends won't have access to Penrite products as it's completely Home Grown Aussie. Fuchs oils do "silkolene" Bike racing oil. They have a castor/synth blend especially for methanol fuels.
A few years ago I got pure first-pressed castor and nitro from R/C Fuel Supplies in Queensland. Methanol from a servo near a Kart club nearby. It was all pretty cheap doing it that way. Mixes and works ok but I've had better success using buggy fuel from my local ToyWorld and then doctor it up with my castor and nitro to get the mix I need. The Cox's seems to run a lot sweeter on that mix. I wait for the once a year 50% off sale and buy a (US) Gallon. Then I can mix up whatever blend I need. 5-10% nitro for Enyas and most other "modern" stuff. Less oil for BB crankcases. The buggy fuel is 18% oil with only 2-3% castor, so I top it up to 25% total.

Thanks for that. I did not realise the Penrite 10 tenths was an Oz product! I thought in my mind it was a big US product. Somehow I thought they were involved big time in US Car racing. Maybe Im confusing Penzoil or something with a sort of similar name. Im thinking the Nascar racing.

I have also used Buggy fuel very much like you describe and then topped up with castor. The stuff in my local hobby shop is 5% castor, 15% synth, and I added castor to get to 10% castor, and found it also went very well in the Cox engines. It might actually be that some synth for the detergent properties is a good thing. Its really hard to know. So many different opinions on so many forums. I just go with the straight Castor and it seems to work well. If I had a modern motor I would just use what the manufacturer recommended.