Which teedee will perform the best?

I know my little engine well

Very interesting test Layback, thanks for posting. I guess the engine spins the black 5x3 COX a bit slower than the APC, because this latter has narrower blades and better aerodynamic design. It would be interesting to see if the No2 engine also spins the APC as fast as the others do?

I see that all 4 engines are with thick wall cylinder i.e these are later production engines.

Changed the thin wall to stepped wall - and later, the thick wall cylinder to prevent cracks in the exhaust port corners

(Unfortunately) gave up the tapered cylinder bore sometime after the intro of stepped wall cylinder ( some of my NIB crystal box TeeDees with stepped wall have, others do not have tapered bore) to cut production cost

Replaced the white metal rod to a different steel and abandoned the oiling hole on the big end..again, for cutting production cost

Thickened  the crank web to increase its strength, necessitating the intro of a new crankcase geometry, marked by the "2" stamped on its left mounting beam

Changed the port timing on the crankshaft and/or on the cylinder too..

And my question refers to this last item, does anyone know how the porting between old stock and later production crankshafts compare?

Can you still get parts for them, if so, from where please ?

I have an old atlas which is worn but usable if you "work with it". I use it quite a bit for various stuff, a very handy machine.

Good eye it is indead an atlas 10f.  I'm currently fixing it up so it can be used again.  I ordered a miter slide from this gent as the t slot was cracked in mine.  He has a really good supply and pretty good prices.  Also makes some replacement parts as well. Your other option is to order from Clausing but it would be cheaper to buy another machine.

balogh wrote:Very interesting test Layback, thanks for posting. I guess the engine spins the black 5x3 COX a bit slower than the APC, because this latter has narrower blades and better aerodynamic design. It would be interesting to see if the No2 engine also spins the APC as fast as the others do?

Thanks Balogh, very interesting. I'm going to keep my eye out for an earlier version, I'd like to compare it with the later ones that I have.  Definitely no oil holes on the rod bottom on these ones, I always wondered about that, makes sense to keep the price down.  It did look like they had a chamfer to help oil get in there.

I'm very interested myself about #2.  I'd like to run them all again durring the summer here and try a few more things.  I did run the #1 back to back with APC and Black props.  I didn't notice much of an rpm difference.  Might need to fly them back to back, or make a thrust gauge to get some measurements.

Enjoyed the runs , yeah summer /spring weather would bee a lot better since most people don't fly in freezing conditions LOL Either way you know you got 4 good runners to use as you want

Flying in cold weather doesn't scare me, I even flew my ez bee in a storm of snow without the wind. And my little biplane, so as not to freeze my hands, I use a kind of big insulated bag for lunches. That I add small heating bags inside the bag has a hole in the bottom for the radio control antenna and With that good old hand warmer I manage to be comfortable flying for several minutes when I finish I look like a snowman 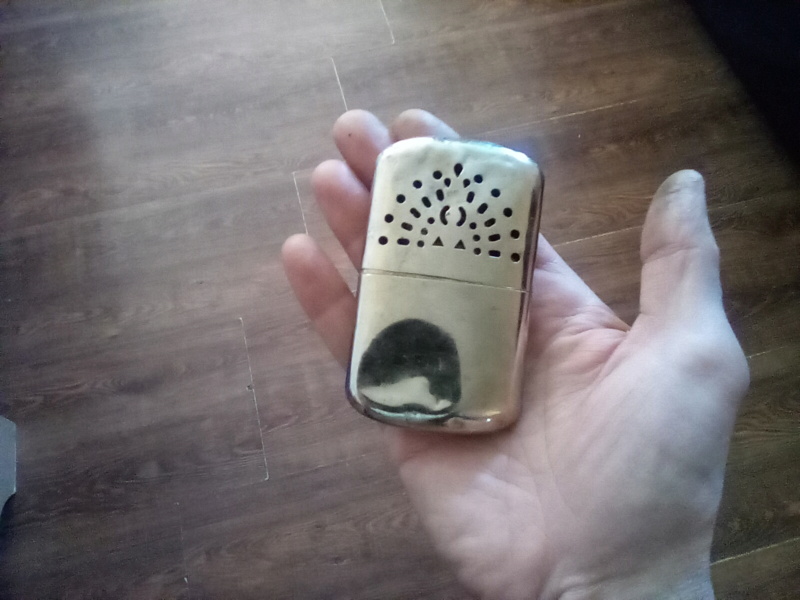 A Sunny winter morning after Christmas. Also after weeks of below zero, the temp was to be in the upper 30s for the day.

I had gotten a balsa flat wing SkyRay  a few weeks before and it was built and painted just hanging in my room.

After dad's famous pancake breakfast he asked what us kids planed for the day...lounge around after chores doing basically nothing was the general answer. BS says he, we been cooped up the last three weekends how about I get some help shoveling the driveway and we can pull the Skidoo out and see if it will start...Some modest interest because we had fun on the single ski old Doo ..but the shoveling part was a bummer....

To sweeten the pot Dad said before we took turns on the Doo maybe Freddy can start and fly the SkyRay in the front yard....hummm...now that may be pretty cool as I had never flown over snow.

Could be funny seeing it land and disappear...heck yea! I am digging this idea so I asked dad if he even thought we could get it started in the cold...he said Dunno but why not see ---it was to be calm and way above the -20F that had us house bound for most of Minnesota January...We all knew from walking to school all winter that on -20~-25F with wind sucked--- and a week later at +25~38F we were sweating by the time we walked the 7 blocks to school.

My 2 younger brothers were jazzed as they though they might get to try to fly it too. Sister Elena would certainly cuddle up with Beast our Gordon Setter in front of the fireplace reading a Nancy Drew book she got from Santa

So around 10 AM sunny, 35Ish and still dead calm and by sunny, I mean squinting Bright

Dad also flew CL but 35 sized Ringmasters... So he brought out his BIG lantern battery for us to use and he wrapped in in a shop rag with a Coleman hand warmer next to the Battery.

I rigged up the Dacron lines to 30 feet and set about getting the start area set up. Brothers prancing, dad holding, I got the Bee fired and tweaked to a high scream and headed to the handle...  The noise was way louder than I remembered...as I write this probably sounded louder because the calm day with 8 inches of new snow was dead quiet out

Dad takes my Hand signal to launch and off it went-- I got a few laps level and some roller coaster before I decided to do a loop or three. Fuel ran out and just as I had imagined, the plane settled in a pristine snow area and disappeared.

DAD was fast to tell my anxious brother to STOP do not run to find it...Told me to stand still as he walked around the flight path to where he saw it disappear and then slowly found the entry hole and the near invisible Dacron lines...snagged the lines and gently extracted to un hurt plane...Too cool

Several flights by my brothers later none very good but OK for first timers the plane had survived about 6 flights and Dad declared MY TURN we never noticed the sun getting dimmer or the clouds building.  As dad was starting the plane, me holding, it started to snow the big fluffy flakes and by the time dad had 2 laps it was snowing pretty hard but still no wind to bother the dinky light plane. Dad starting showing me lazy 8s as thing I had not master yet due to my fear of inverted... Was so damned cool watching my Orange doped SkyRay leaving a wake of disturbed large fluffy snow flakes... and when the engine cut the gliding plane dead silent and the world around us only sound was dads boot crunching the snow as he whipped the plane around to attempt landing on the drive way

Davis's hand warmer brought back this, now vivid to me and, un remembered until today-- fun Winter day with my Dad and brothers

"COOL " Story and a great memory there Fred. Really like the part where the Skyray left a wake in the snowflakes, I can imagine that was fun day.

Great story Fred...I can imagine myself into it being young Fred enjoying the day and flights with a hobby sharing father and brothers...

Not having a hand warmer myself ir a helper to start the engine, I do not fly my RC COX planes below +5C because my un-gloved hands, already cooled by the prop and evaporating fuel when the engine is hand started begin to shiver and leave me unable to control the sticks..