Log in
Search
Latest topics
» Plans to revive the Cox .049 Tee Dee?
by HalfaDave Today at 1:54 am

Hi folks,
Thought I'd share here my progress with the Cox engine I found. I sent a couple pictures and a description to Cox International, and they identified it as a Babe Bee .049, and I've ordered a few parts and tools to fix it up. In the mean time, I've had it apart and got it cleaned up. 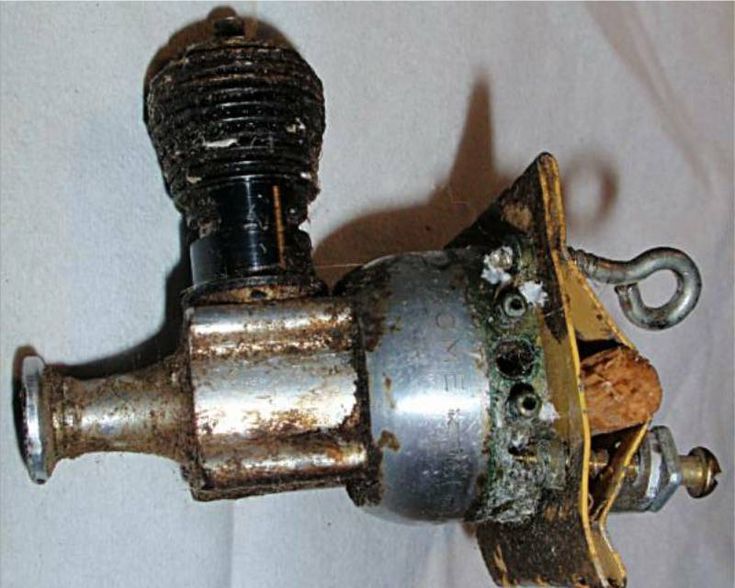 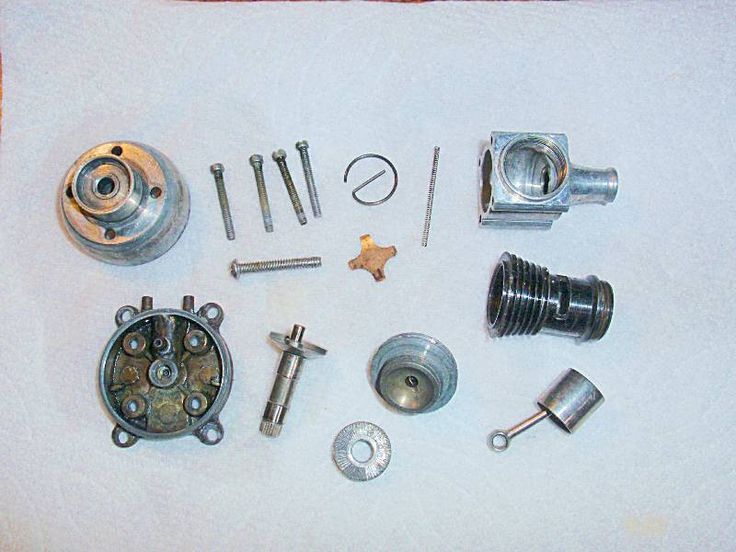 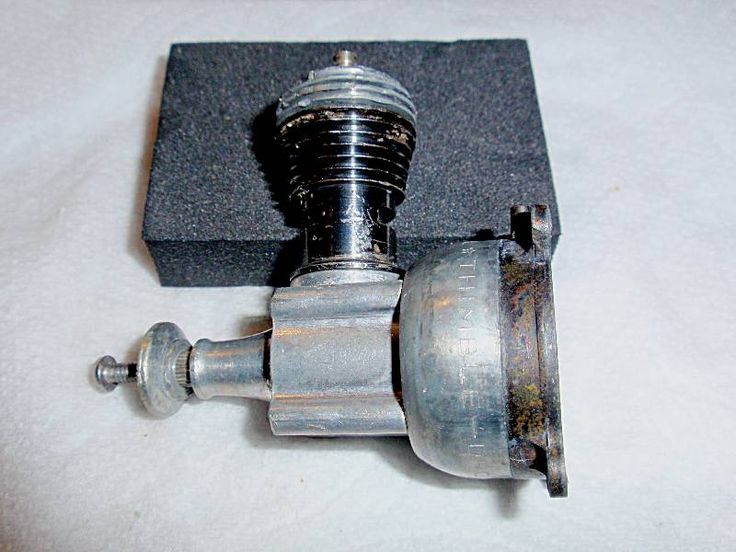 Depending on when supplies arrive, I hope to have it running soon! The glow head still works, and nothing seems cracked or broken, except the gaskets and the internal fuel hose.

They appear to bee in bussiness with reviews of 4 wks. ago . Engine looks good that it shed it's dirt , you do know the drive plate is not all the way on ? Probably waiting on the kit .

Nice job on cleanup and welcome !…. Now you’ll have to build something for it when repairs are complete!

Congratulations, complete takedown can't get any better than that. What did you use for detergent?

Looks ready to run except for that drive washer..........Eric you pay attention and have Eagle eyes!

I like it as is, but you could make it like new by chucking the fuel tank up in a drill press using the air intake tube and use fine steel wool to lightly polish, use of a light oil is an option. Then soak the cylinder in white vinegar to remove the finish then re blue with gun blue and season/polish with oil and a toothbrush. Aluminum polish on the case. To much of any of this though and you have a hat-check floozy.

WHAT BOB WAS THINKING ?

Thanks for the responses and information everyone! I've only got it loosely together now, so I won't lose any parts. I used POR-15 degreaser to clean it up. It was seized up pretty good, but I've read that the oil turns into glue after a while if not cleaned or used. This engine could have last ran 50 years ago. I'm 44, and don't remember Grandpa even having these. Something he probably did with my uncles back in the 60's maybe. I'll ask him if he remembers any details later today.

I found one more Babe Bee in Grandpa's shed. It's complete too. Even has the mixture screw. We're getting pretty far along with the shed clean out, so I don't think we'll find any more. So 2 bees, a Wen Mac, and an Ok Cub. Only the bees are complete.

I got the second bee cleaned up and taken apart. 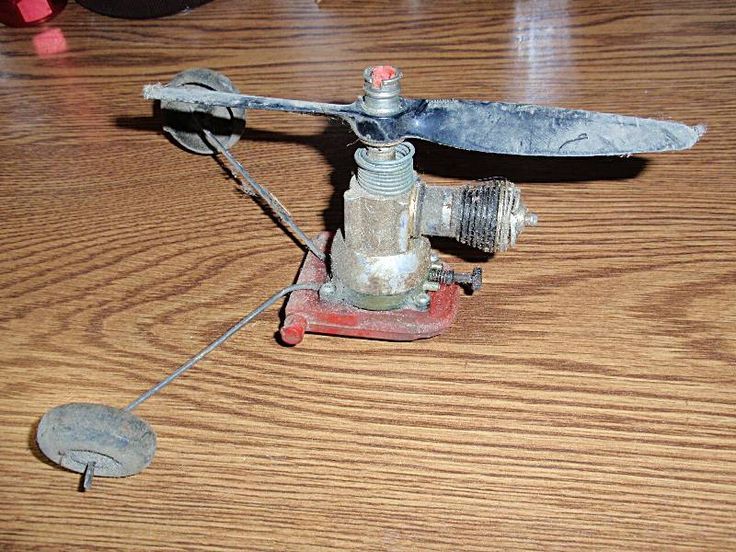 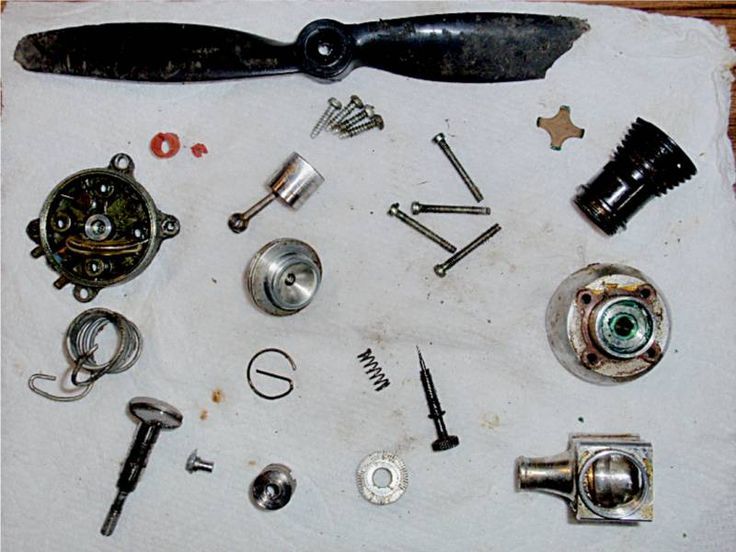 Unfortunately, the crankshaft didn't survive. And I managed to squash the drive plate. But I can replace those, and everything else cleaned up nice. 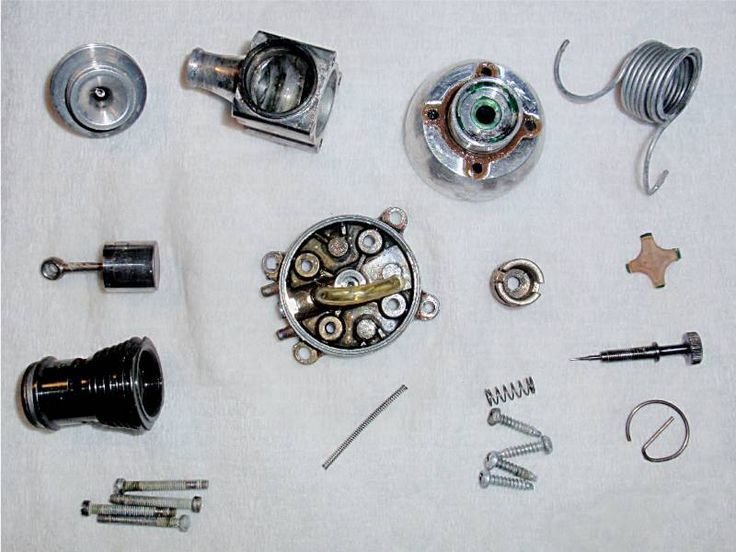 Between the 2 engines, I have enough parts to build one that will work temporarily until the first batch of bits from Cox International comes in the mail. That'll take around 3 weeks they said.

Good to know I have a few options as far as fuel. I see there are lots of discussions over how much if any nitromethane needs to be in the fuel, and what other chemicals might be substituted. Not sure what I want to do yet. These engines aren't likely to power planes anytime soon. More likely they'll be just for show. Maybe I'll put a pulley on the front and make a "gas" powered dremmel or something.

I'm heading back to Grandpa's in a couple weeks for yet more shed cleaning. Hopefully I'll have one of these running by then to show him. He remembers flying these around 1967, but not much as far as details. Unfortunately, my uncles have already passed away, and mom only remembers Grandpa tripping over backwards once and crashing the plane. My father-in-law was friends with one of my uncles, but only remembers the popularity of these planes and engines in general, at the time. He and my uncle used to get together and steal road signs. We've found a few of those in the shed too, LOL.

He and my uncle used to get together and steal road signs. wrote:

You have got to run the BB ! Don't remember if you said you have ever heard one or have any experience with the engine's ? You will enjoy the fun and noise ..

fredvon4 wrote:IF STILL IN BUSINES see if these guys can sell you fuel

The rc hobbies in Covington is open, but they don’t have cox friendly fuel. I usually run sig champion 25. My engines really like it.

what I can advise you is to find castor oil To make a richer oil mixture To start with a nitro gas which already has castor oil in 50% Synthetic oil 50% castor A gas with a little less oil more nitro possible Add castor oil to have nearly 20% oil plus like 22 % is Good For more engine longevity, the piston is not the most likely to wear out. It is the connecting rod that wears out Piston ball joint get loose faster

Sounds like modifying a pre mixed fuel is the way to go. I found some 20% nitro fuel with 9% synthetic oil that I can mail order. I did some math, and I can add some synthetic oil and castor oil and have a 50/50 castor/synth mix. I'd have 20% oil and 16% nitromethane. I figure that should do ok, since I've seen several people running their engines on little or no nitro anyway.

For the moment, I already have methanol and I picked up some castor oil. Made myself 1mL of 20% oil mix just to see if I could get one of the engines to kick over. It actually worked! Didn't get it on camera, but it ran for a second or so. I need to make a stand or something to mount it to, and a more portable electrical source before I try again.

Good job rebelrider.mike! So as you just found out that it fired. They can and will run on castor or synthetic oil (or a mix thereof) and methanol alone, but with the following. Power will be way down, and as well, needling it to keep running will have a more narrow window for tuning. I have run mine on that mix before as well, but they are just not as happy!

Also, as this has been debated many times online, you can also just add however much castor only needed to the fuel you found and will also be just fine. No need to buy more types of oil than needed. They do like castor!

Yes castor is their preferred oil. It’s ok to have synthetic, but not more than 50% of the total oil content, it’ll destroy the piston ball joint.

Hey, Mike.  As others have said, you can doctor other fuels that have a castor/synthetic mix already.  My go-to fuel when I cannot get proper a castor/nitro fuel mix is Traxxas car fuel.  Not all car fuels are desirable, as most car fuel makers don't disclose the oil content/makeup.  But Traxxas Top Fuel Power Plus is something of a known quantity.  It only has 16% oil, but that oil is a 50/50 blend of castor/synthetic.  Adding an ounce and a half of castor oil to a 32 ounce bottle results in 20% oil.  I've used it successfully for years when I couldn't get the good stuff.  Most local hobby shops that sell car fuel have the Traxxas stuff on the shelf, along with other brands that I couldn't get info on for oil content.

If you can't find a local shop, you can get it on Amazon:  Traxxas 33% nitro fuel


But if you're going to order online, might as well order from Brodaak, SIG, or GlowPlugBuddy.

Going through boxes I brought home from Grandpa's and found 2 more engines. 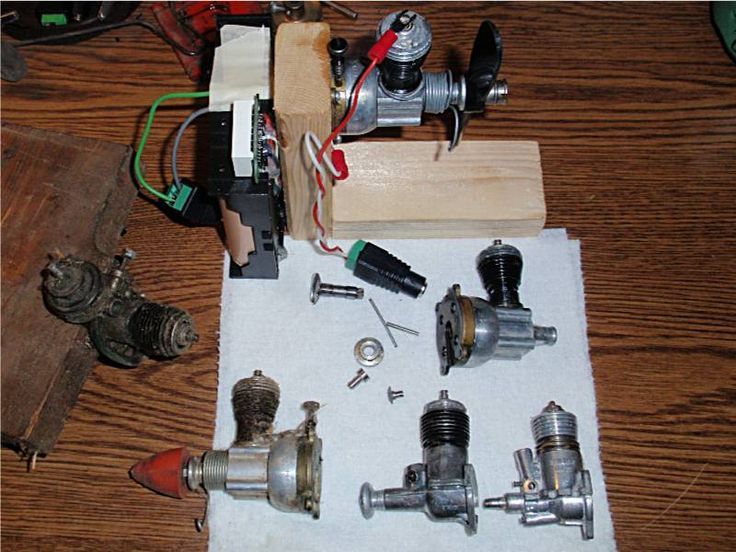 Another Bee, and an Ok Cub. Both look pretty complete as far as I can tell. And both are seized up solid just like the others were. I think that's finally all of them, but who knows...

Well now you have a collection!!…. Especially nice that they were your grandad’s …. I’m sure he’s pleased you have taken an interest in them

Just go slow and easy on things that are stuck…. Lots of good advice here on how to properly take things apart without damage…. Also to rebuild and run….Keep us updated…,

Cool! Surprised you haven't found some planes , You are getting a collection going there

I found a few plane parts, but they're pretty broken. I got the rest of the engines apart, and was able to save quite a few parts. Unfortunately, one Bee will need a new piston, and two will need new crankshafts. Fortunately, Cox International has all the stuff I need. 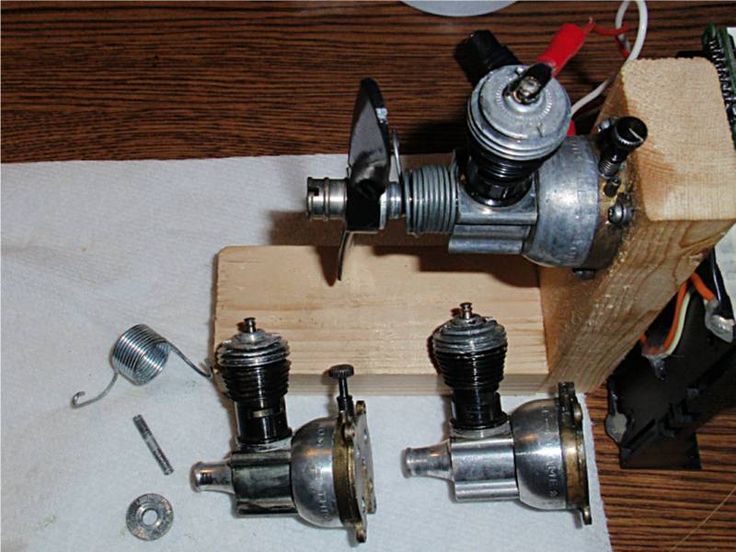 I dug out some of my lab glassware, and did a little chemistry. I read a lot of conversations about nitro fuel in general and nitromethane in particular. Seems some folks mix in 2% acetone as a substitute for the nitro, and it has some of nitro's benefits. What I read was that acetone helps the engine start, and run a little smoother, but it won't provide the extra power that nitro will. I don't need the power, since the engine doesn't actually do anything, so I figured I'd try it. I mixed up 2 mL Acetone, 20 ml castor oil, and filled the rest of the beaker to 100 mL methanol. Works real nice so far! Before I was getting it to run for a couple seconds here and there. With the new batch of fuel, it ran for maybe 15 seconds until I shut the fuel off. Might have run longer, but I'd like to get it outside with plenty of ventilation first. It didn't smoke like a regular 2-stroke. Does seem to spit castor oil all over though, LOL.

I got the OK Cub engines taken apart and cleaned up too. 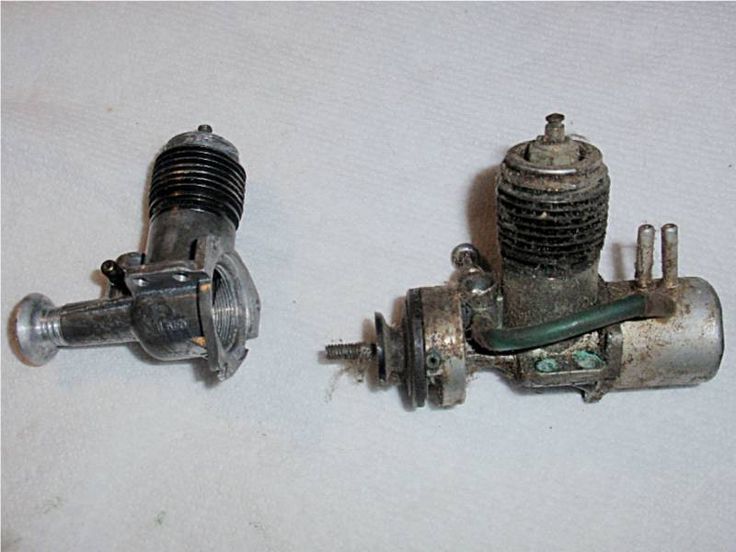 Those came apart pretty easily, though they were also seized from congealed oil. The more complete engine has a little recoil starter like on a lawn mower. Unfortunately, the spring is broken, so it doesn't work. But I did get enough parts from both engines to build a complete one. 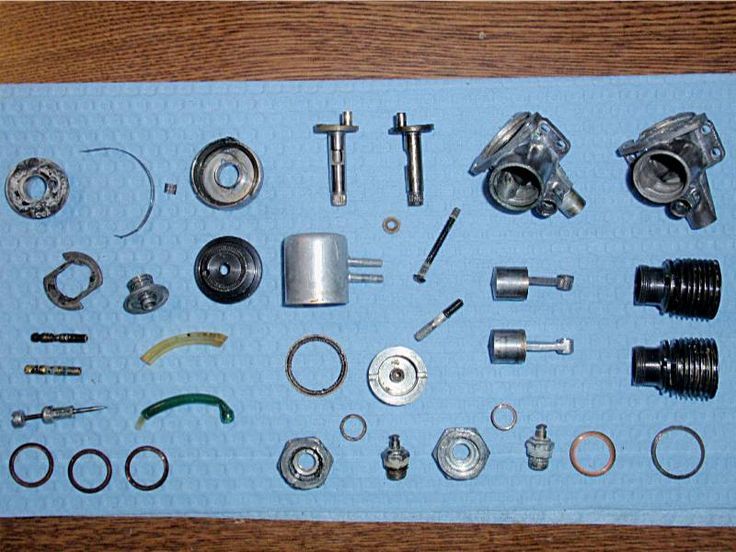 I still haven't gotten over these tiny pistons yet! So far, I haven't gotten the engine to run. I'm still a noob, but it feels like there's a lot less compression than the Bee has. I haven't found as much information on these as the Cox engines, but I get the feeling that OK Cub is considered inferior to Cox engines.

I also cleaned up the Wen Mac Mk 2, but it's missing a back cover for the crank case, and also the needle valve and tube. Also, I think the crank shaft may be broken in the front where the propeller would go. I haven't had a chance to search around for Wen Mac information yet.

I should be getting some Bee parts in the mail in the next week or so. But if anyone knows a good source of Ok Cub or Wen Mac parts, I'd appreciate the info.

rebelrider.mike wrote:Does seem to spit castor oil all over though, LOL.

So now you know why they are also reffered to as 'Castor Slingers'!

Good job, keep up the good work and keep them photos coming. You have got a very good grasp at this so far, and your attention to detail is also very good in your cleaning.

Yep, and keep all the plane parts found, you will make at least one to get an engine flying...